The welcome return of demolition derby. 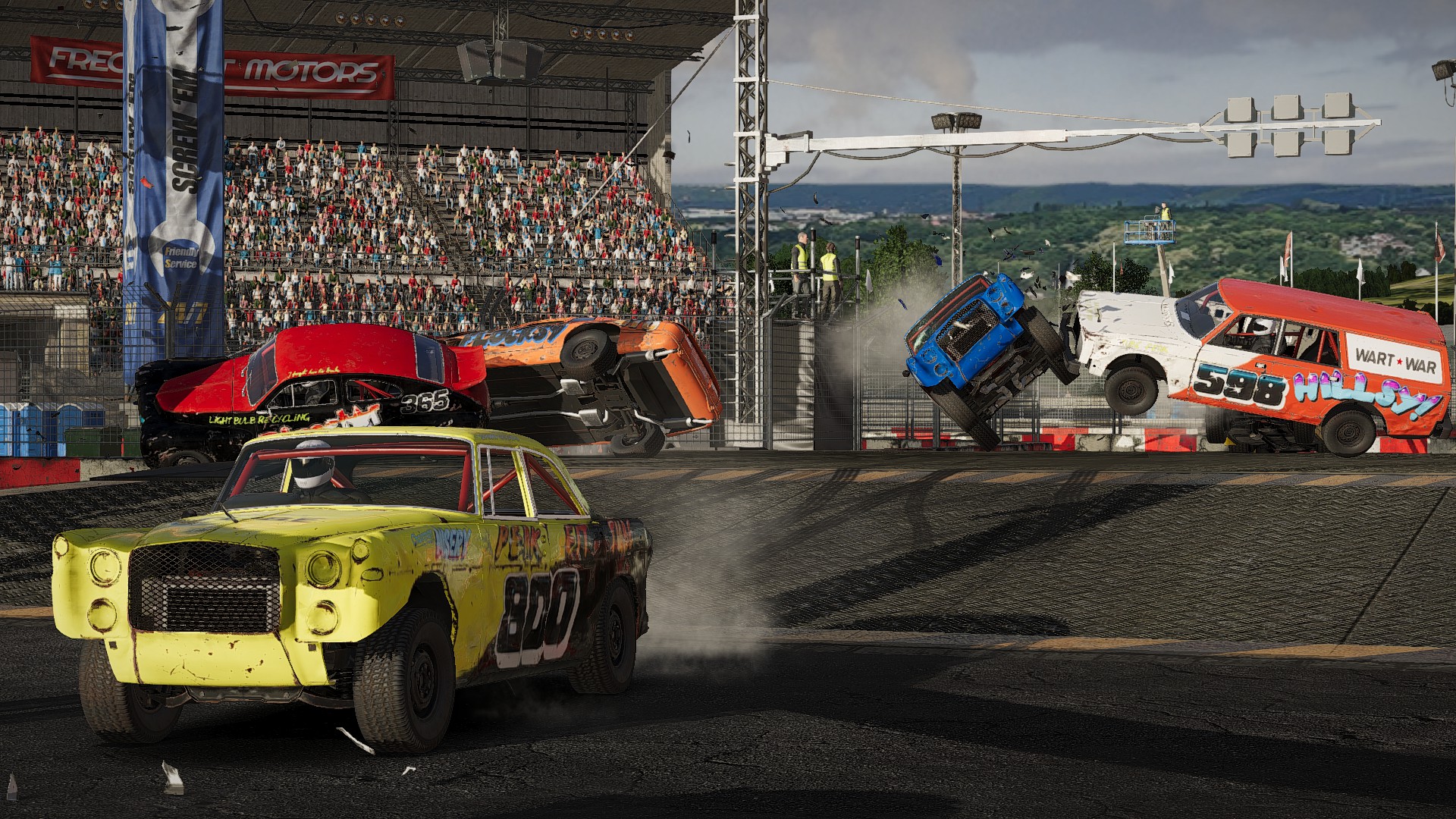 Wreckfest brings us tyres-blazing back to the under-represented demolition derby style of racing. Bugbear has lovingly crafted a racing sim following almost entirely in the footsteps of their own FlatOut series. They’ve taken their time with development after bringing Next Car Game (as it was originally titled) to Early Access in 2014. It’s been a long four years for Bugbear, but they’ve finally unleashed their destructive delight.

Wreckfest now includes a full career mode similar to those in most racing sims. You escalate through tiers of events and vehicles to earn cash and experience. A welcome feature is that single-player custom races will contribute to both as well. You aren’t obligated to finish the career mode unless you want all of the unlockable vehicles.

There’s a selection of events split into the three categories that make up Wreckfest. Derbies are muddy death pits where you wreck other drivers, in a last man standing kind of deal or a deathmatch mode. Races are the more traditional, frequent events. Lastly, there are special challenges involving unique vehicles including a lawnmower derby and a school bus race. It’s as hilarious as it sounds. 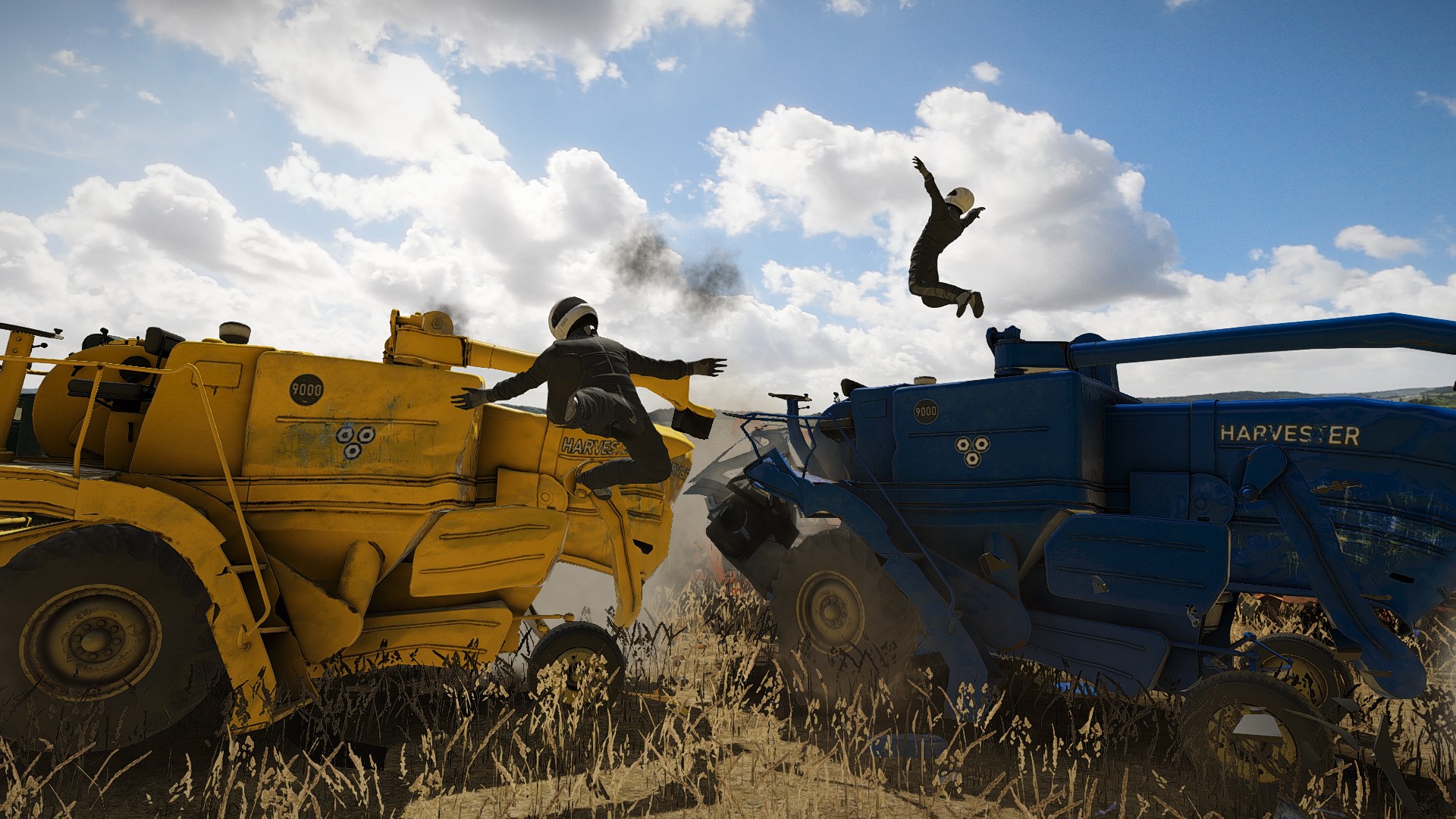 I enjoyed the standard races much more than I expected to. The way Wreckfest forces you to approach everything about racing differently gives the most standard tracks an exciting twist. There’s no purity of racing lines and top end performance here, and the way you approach a track will depend on a delightfully chaotic blend of factors.

The unlicensed cars look suitably crusty. Each one has a selection of paint styles, visual changes, armour, and engine upgrades. You can build an absolute tank with every armour upgrade, costing you speed and cornering. I mean, when you’re using other cars for brakes that’s not a drawback. Balancing your speed and strength adds a little more depth to a fairly simple tuning system.

The control of vehicles is superb; there’s a weightiness to it unlike in most driving games. Even the lightest vehicles recognise they’re actually made of metal, not feathers. I wish there were more options all-round though. Lovers of variety will find much lengthier automotive collectathons in other titles, but unconventional ‘upgrades’ like strapping a steel beam to your car and calling it a bumper fit the theme well. 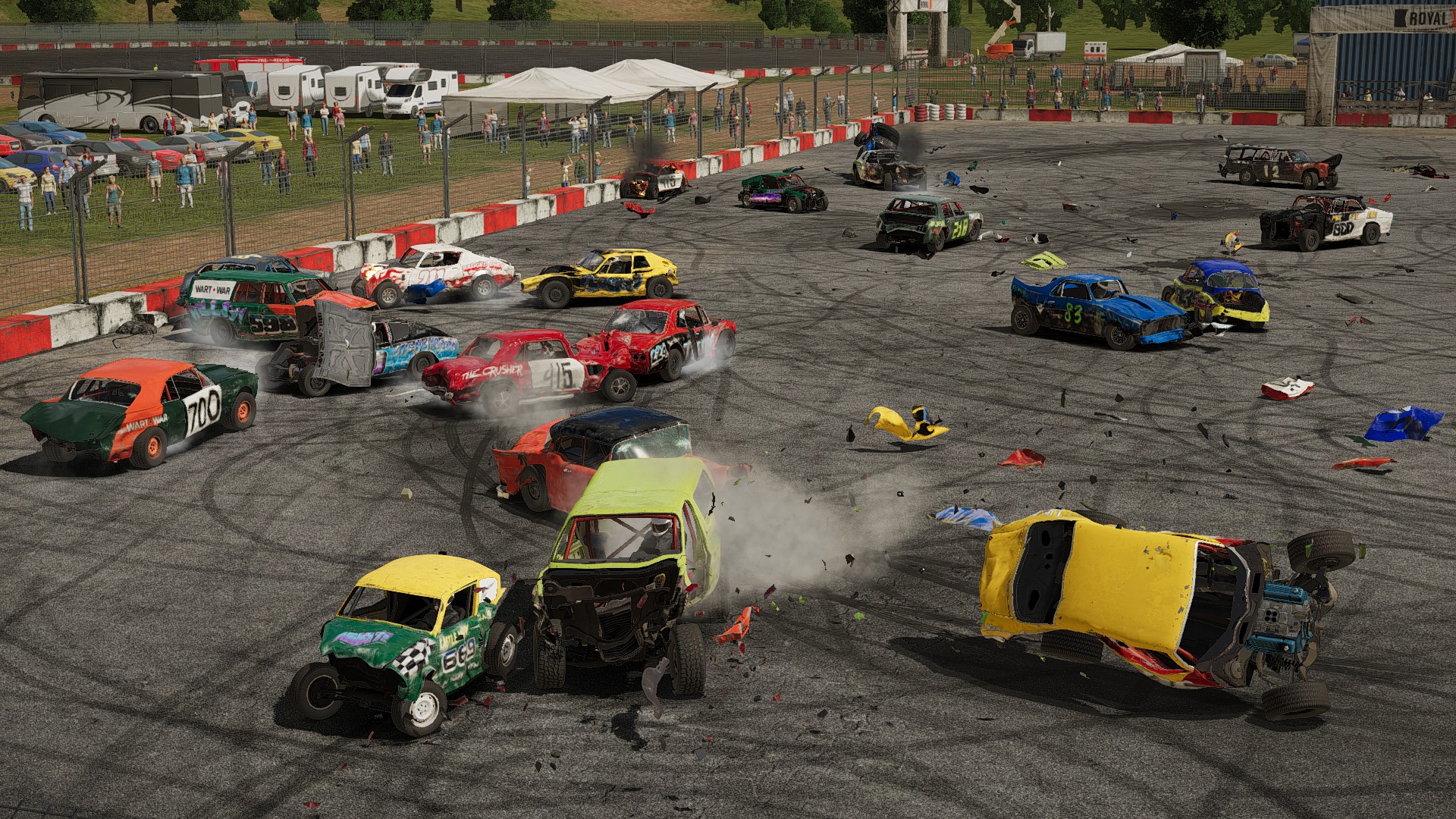 Thankfully, the few options here are far outshined by the masterfully crafted physics engine and how it makes every scrap, bang, and crunch visually impactful. It’s really the main focus here, and every part of Wreckfest serves to emphasise it. The rest of the game looks smooth, and I spent far too long playing with photo mode and instant replays.

The sound compliments the destruction impeccably. Impacts are full of guttural scrapes, low-end groans, and high pitched squeals of grinding metal. The soundtrack is a little inconsistent, with some heavy metal tracks and the occasional European dance music. It fits well enough, but I honestly turned it off after an hour.

The tracks are fairly plain, taking place mostly in rural settings where derby racing originated. They aren’t visually spectacular, but they are varied enough to not become repetitive. Careening through tyre walls and bringing an opponent’s race to an abrupt end thanks to a nudge into a concrete barrier is sublime. This is where I think Wreckfest, thanks to these moments, gets away with a lot that most modern racing sims might not. 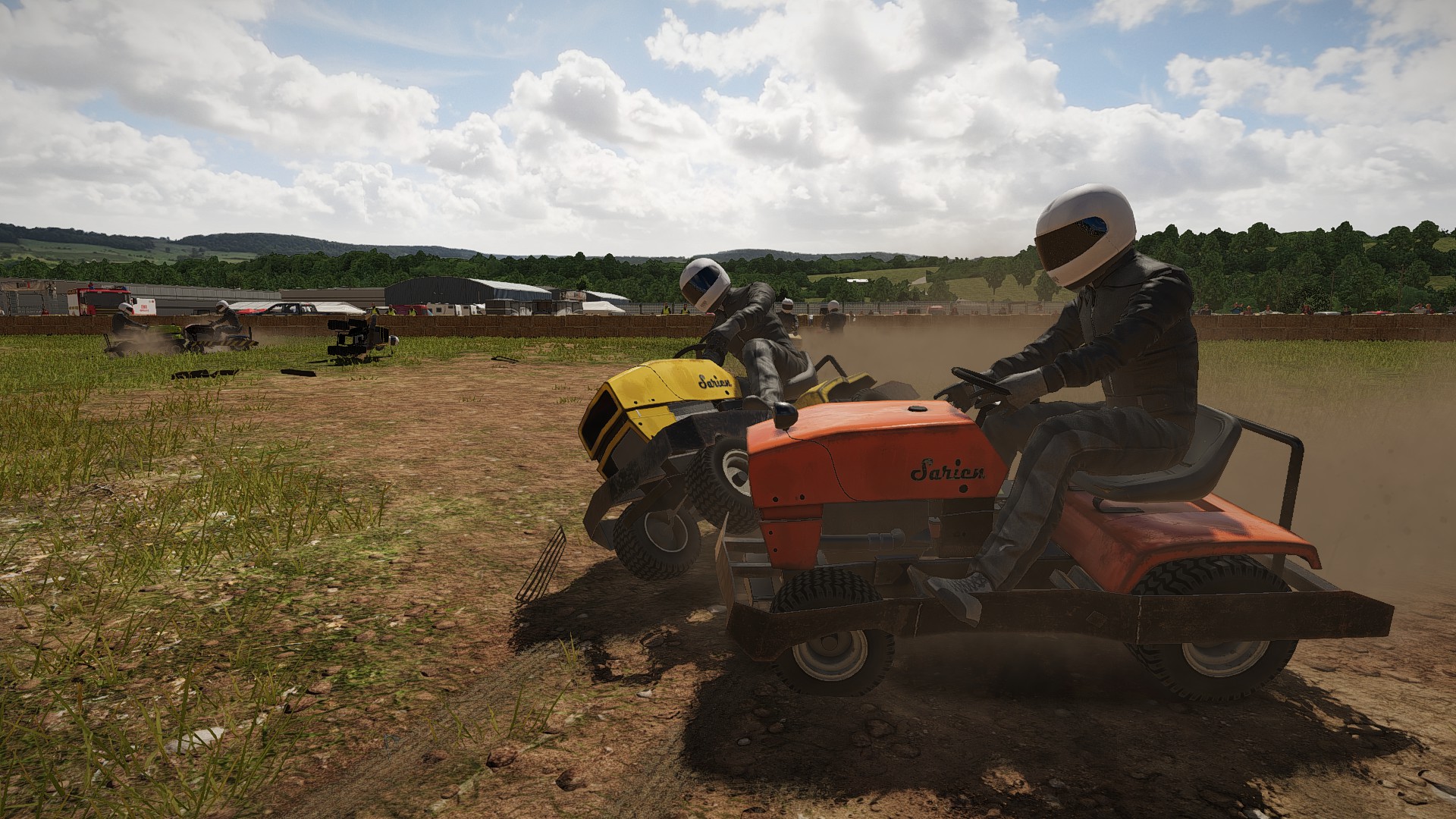 To give an example, there’s a moon-shaped circuit that looks a little like a double-ended noose. When you start the race it seems normal until some cars fall behind and suddenly you’re heading in the opposite direction. It’s nail-biting stuff when one wrong turn could cause a race-ending wreck. The focus is on the action rather than smooshing as many pretty pixels into distant mountains and it’s much appreciated.

Wreckfest is generous in the best way to players; everything gives you experience towards unlocks. I’ve had some absolutely shit races, but I still racked up some exp by totalling other cars. Regardless of where you finish, it all tallies up and finishing first only impacts your cash reward. And hey, if you’re the type of racer that can’t stand losing you can restart as many times as you want. No sweat.

There’s a lot of flexibility in difficulty for those who want things a bit more arcadey or sim-like. Each automated assistant can be individually switched off and the AI can be amped up. I find the AI is focused heavily on revenge, playing into the rival system. Hitting another car hard enough gives you bonus exp on repeated bashings. They’re not afraid to give back either – beefsack (a memorable rival of mine) literally wrecked himself swerving to take me out on a straight. Damn you, beefsack! 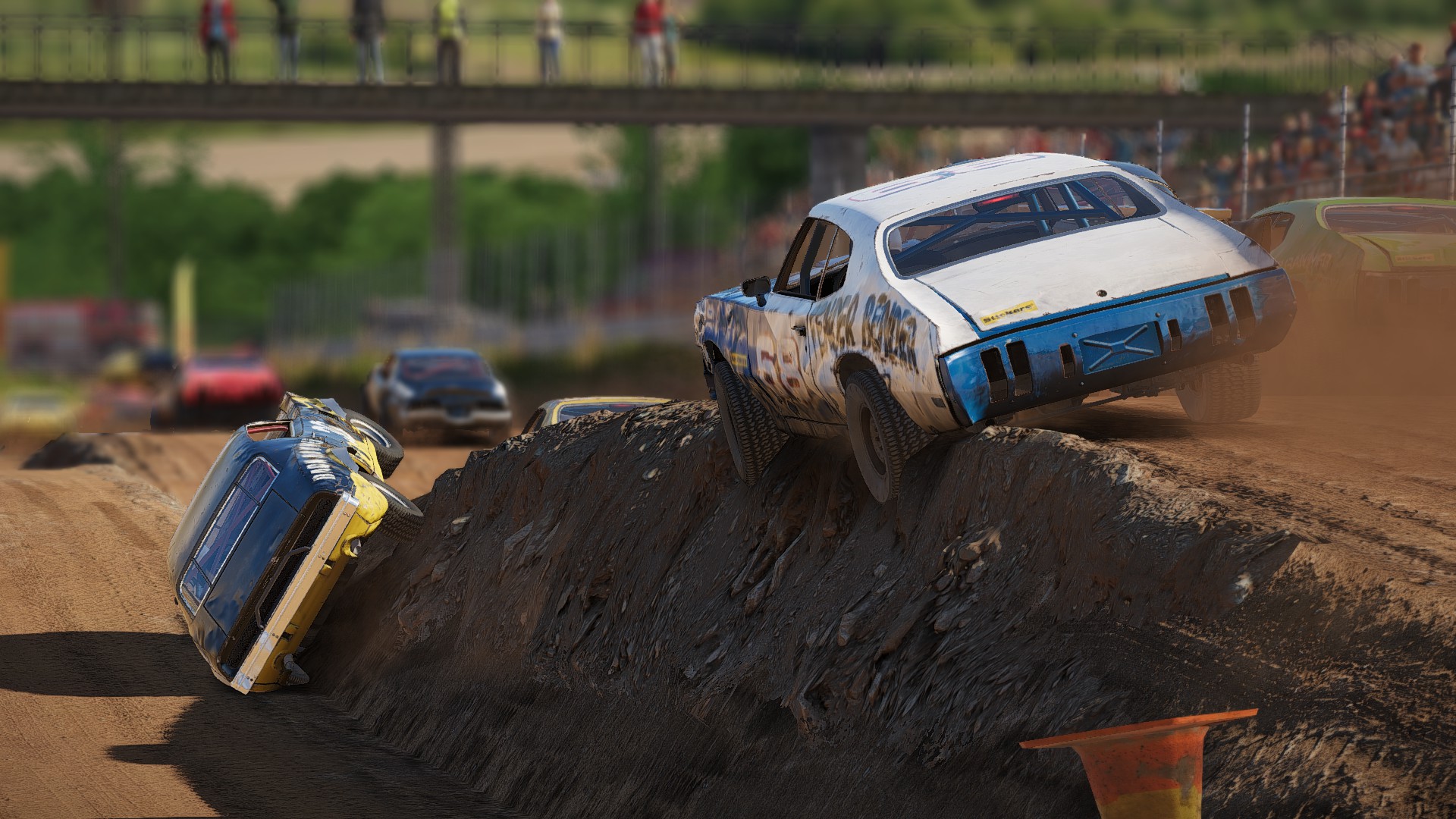 This encourages the best kind of risk-reward payoffs. Timing a collision just right could pull a win from nowhere or kill your chances completely. Wreckfest gives you enough reasons to keep momentum and finish every race. Your exp and cash rewards will get a bonus multiplier from the difficulty settings you’re on too.

My only concern with Wreckfest is with longevity. The multiplayer is functional but nothing special, and modding is possible which might help. For some there might not be enough game here, all I can say is I’m fifteen hours in and still enjoying the single-player. Hopefully, Bugbear can keep adding new content in future.

Wreckfest isn’t the greatest racing game ever made, but it’s filled a niche it excels at. Everything about it focuses your attention on the finite moments of utter chaos and straddles the line between arcade fun and simulation. It wants you to be reckless and doesn’t burn you for it.