King of the swingers.

Usually a game expresses a strong sense of purpose to give the player some significant agency. In Rifter, you’ll explore treacherous planets to find and destroy anomalous rifts and towers, at which point you can annihilate said planets into oblivion. But why? You don’t really know. With time, however, you’ll uncover the mysteries of the galaxy and make some sense of your formidable duty as a Rifter.

A support drone called Tiny accompanies you on your cosmic journey, its loud disposition giving more than a subtle nod to The Ocarina of Time’s Navi. But unlike the oft-maligned fairy, I found Tiny’s exuberance generally charming and funny, their chatter punctuated with expressive emojis.

Rifter is very much a platformer, but not in the traditional sense – you’ll not be spending a lot of time on the ground. Instead, you’ll use a grappling hook to lasso numerous hook points in the sky and swing between them like a futuristic space Tarzan. This swinging mechanic relies heavily on speed, momentum and timing – and just a dash of luck – to get you to where you need to go. With satisfying physics and boat-loads of speed, it’s a lot of fun to swing across the levels in search of secret shortcuts and collectibles. 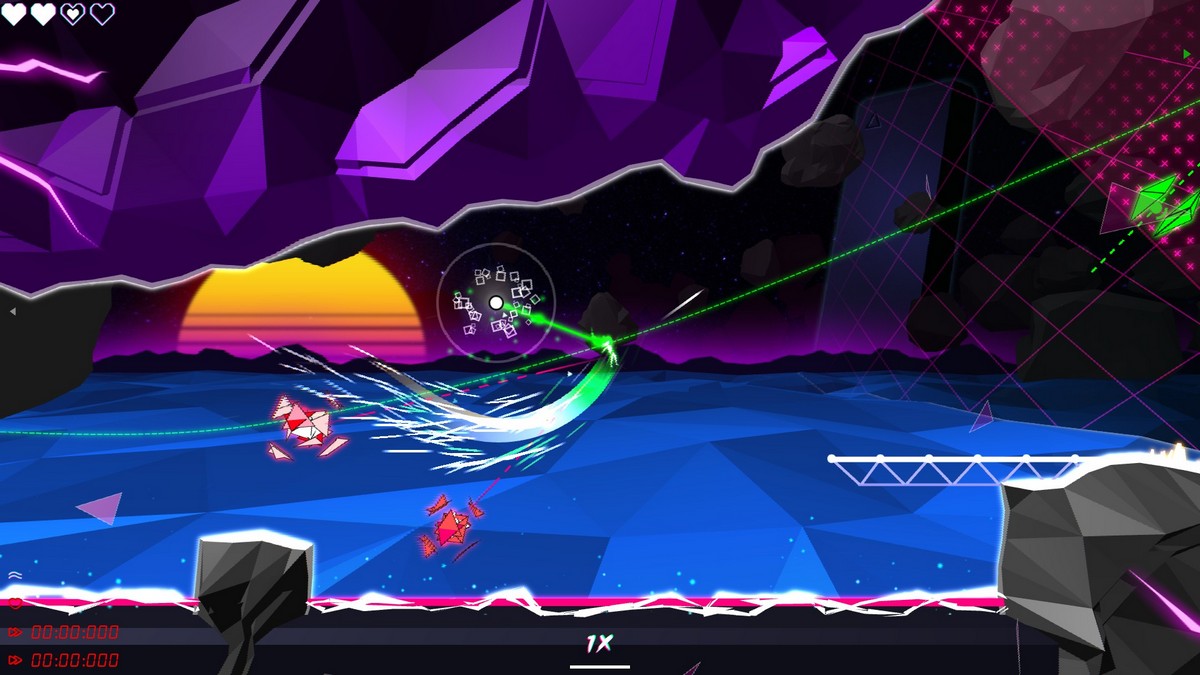 Hidden in the nooks and crannies of these levels are brightly coloured shards, exchangeable for upgrades and abilities at planetary stores. Whether boosting your health and speed or adding tricks to your arsenal like the ability to accelerate downwards for extra momentum, these are a great incentive for scouring every level for shards and putting in the legwork to reach their most remote areas. 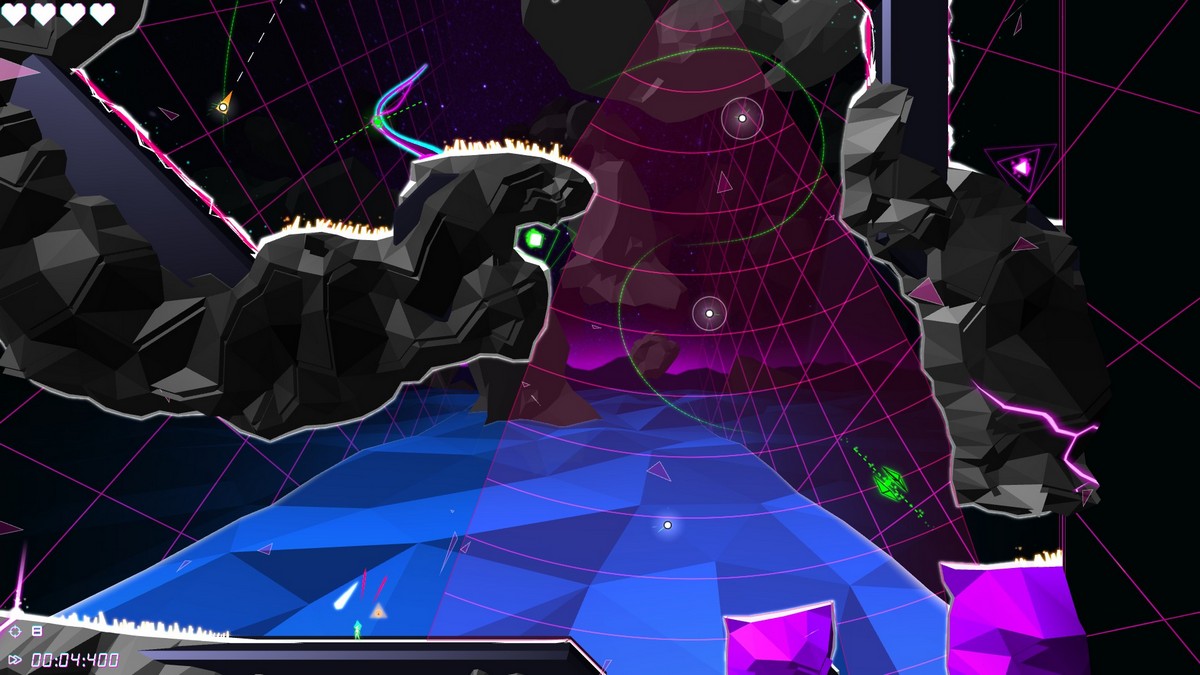 Rifter’s first world eases you in gently, but the further you progress, the more’s thrown at you. Upgraded enemy drones. Levels with time limits. Areas infested with missile-launching tentacles. Towering colossi bosses. With over 90 levels there was the potential for things to get stale, but around every corner there’s a new mechanic, enemy or hazard introduced – for better or worse.

Combat is simple but gratifying. Enemies are often bolstered with force fields and only vulnerable to attack from the rear. This results in a balletic tango in which they hone in on you with lasers and missiles while you frantically swing and dash to their weak spot. 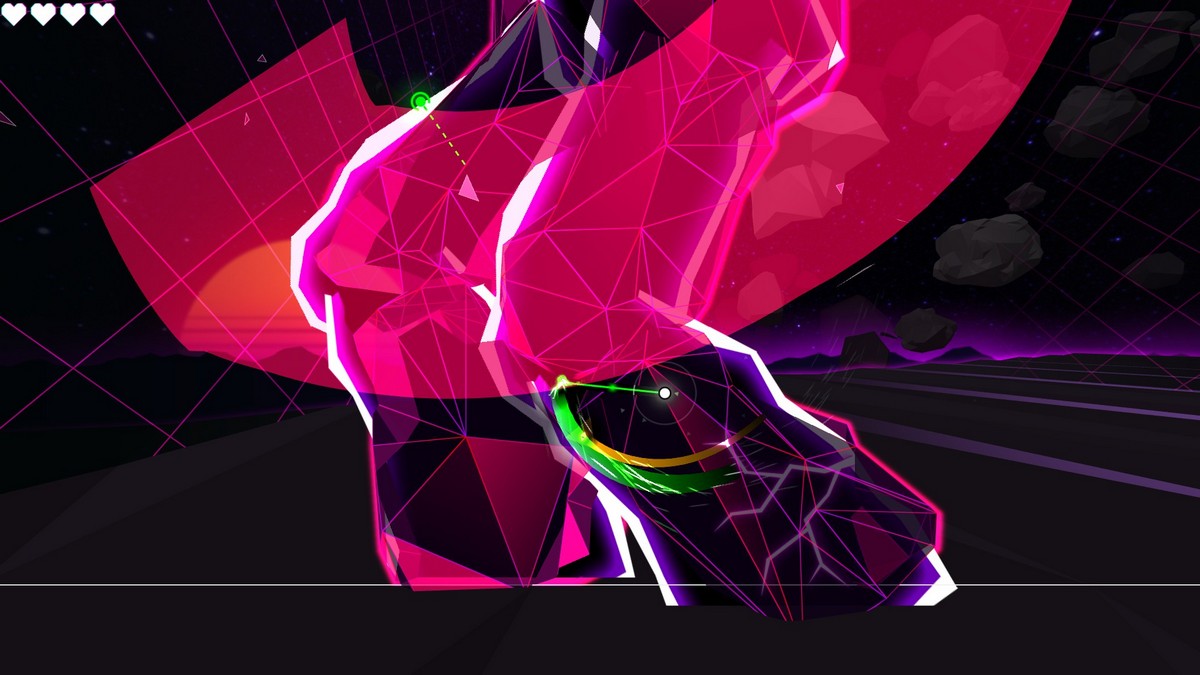 Rifter still isn’t quite as tough as Celeste or Super Meat Boy on the whole, but checkpoints are eroded once you run out of lives, so you’re straight back to the beginning. The downside of this is having to repeat difficult feats of acrobatics over and over to collect a level’s shards because you keep dying later on. There’s a fine line between challenging the player and pissing them off, and Rifter’s biggest shortcoming is that it doesn’t always get this right.

What Rifter does nail is its visuals, which personify 80’s sci-fi practically to the point of parody. There’s the amber setting sun; bright pockets of neon; generous lashings of purple; and sharp, abstract geometry. It’s a slick aesthetic, marred only by the fact that it doesn’t evolve significantly over the course of the campaign. The roughly 30 levels in a world all follow the same theme, while each new world is essentially just a palette swap of the original template.

The soundtrack fits squarely within the groundwork laid by Rifter’s retro visuals, with a bangin’ selection of synthwave tracks. Within no time this pulsing electro burrows itself within you like a Xenomorph, tying the presentation together into something paradoxically both derivative and remarkable.

Rifter is a well-accomplished acrobatic platformer that gives so many reasons to keep coming back for more. Whether you’re collecting hidden shards, tackling the bonus challenges of each level or beating your high scores and advancing up the leaderboards, there’s more to draw you in than merely completing the campaign.

Taming the challenging swinging mechanics is no mean feat, but I can’t wait to see what ridiculous stunts the community will be able to pull off with a bit of practice. Mark my words, Rifter will be a speedrunner’s paradise.