Ark’s new DLC is the better of the paid-for DLC so far, a sentiment I feel that most people will share. Scorched Earth was fun, yet it didn’t feel too adventurous, to the point where the Ragnarok map has a section of Scorched Earth taking up about a quarter or so of the playable area, and it doesn’t feel too out of place. Aberration is far better though, and while it suffers from some rather serious pitfalls, it manages to claw its way past them to be a map that people will continue to play.

First of all, Aberration is hard. Like, really hard. Spawning at the area marked ‘easiest’ doesn’t seem to be easy: Basilisks patrol the area – giant snakes that can spit venom at you, killing you almost instantly – and water seems mysteriously absent. These two factors alone present a problem, and I feel like people are only ever going to be here long enough to get the survivor notes to claim the XP boost, then will clear off to someone more viable to live in. The issue of water is abundant throughout the map, with there not being a lot of it on the upper levels of the cave, and your character getting thirsty very quickly. For a while, I seriously thought that the server I was playing on had water drain turned up.

Personally, I moved out of the easiest area the moment I had scoured it for XP boosts, and moved next to a lake, which offered water, a limited supply of wood, and also giant crabs which pick you up and fling you in the sky, if they don’t waterboard you first. When I decided that the views were nice, but the killer 50-foot crabs were a bit of an issue, I loaded up by trusty raptor, Steven, and we searched for a new home.

I found a secluded cliff that my seasoned brain could tell would be a perfect spot for a small base, or at least for now, and again, the issue was water (no giant snakes or crabs this time). A water source was nearby, but it was glitched and wouldn’t let me drink from it unless I hooked it up to a pipe system. Later on, it wouldn’t even let me drink from the pipe, claiming it wasn’t connected to a water source. However, my base offered great views of the lake which harboured Spinosaurus and more crabs, or Karkinos; and The Edge, which is this map’s equivalent of the northern snowy area, a place for masochists and people who want dragons which can turn invisible and climb walls.

On the subject of dragons, let’s talk about the tames on this map. There are fifteen unique creatures that you can’t find on any other map (yet), but only six of these are rideable. One is the boss, and five of them basically do the same thing as each other, called charge creatures. One of them, the Lighthorn, is below. He’s called Shaun. Knock off the three creatures you can’t tame, and it is a fairly disappointing pool of potential tames if we’re being honest. 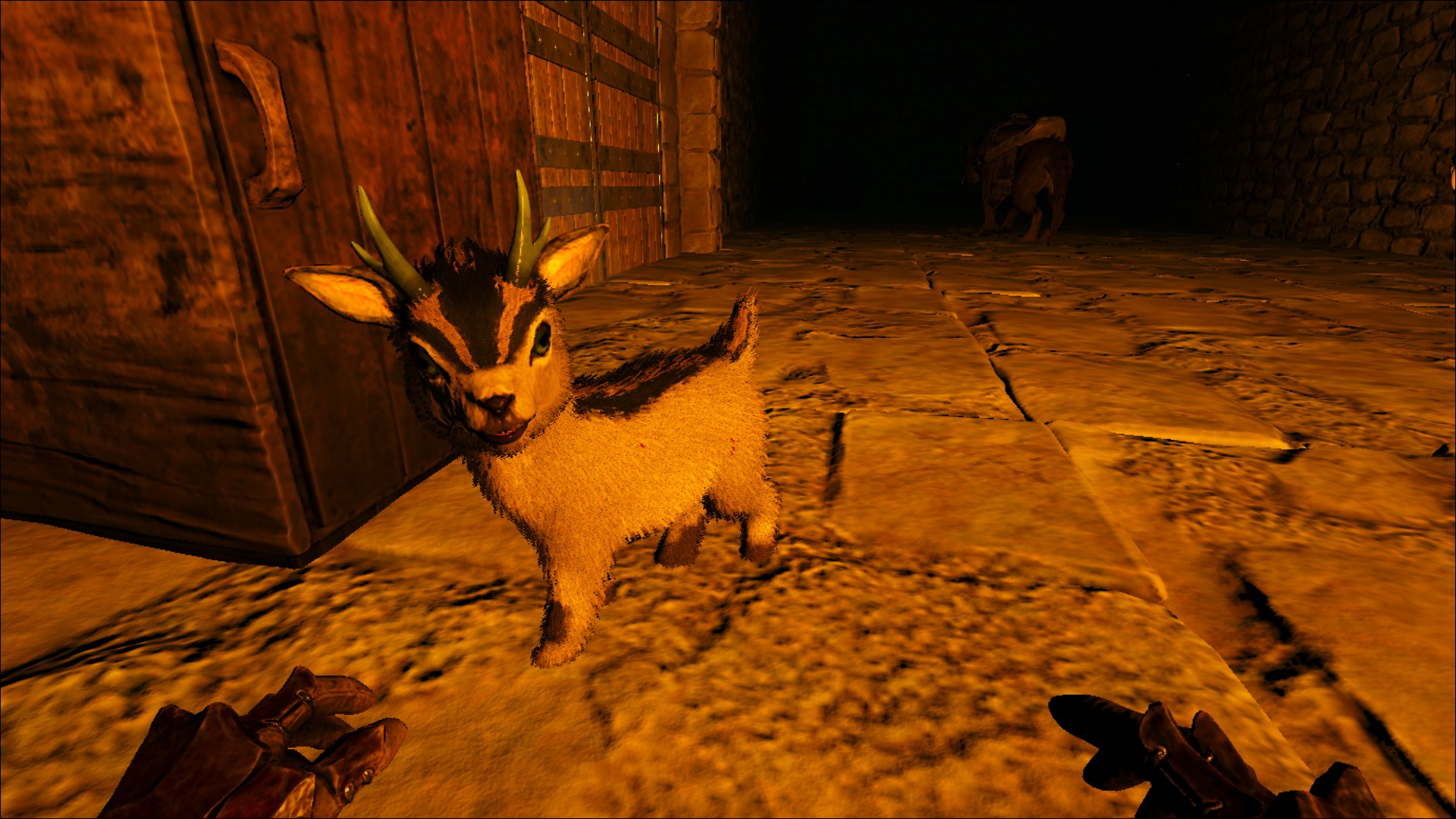 Some creatures are very cool, yet almost broken – take the Ravager. This dog-like animal can go on ziplines, proving very useful for players who want to go up them as well as down. It also does a fair amount of damage, gets a damage buff if it is in a pack, and applies a damage over time effect if it hits enemies. All these factors combine to create a creature that you need to tame just to keep up with everyone else, and I’m not sure I like that: the developers changed the way flying dinosaurs worked in order to make non-flying dinosaurs more viable, but it feels like this is a case of ‘two steps forwards, one step back’. Once you get a Ravager, nothing compares for general use.

There’s also the Basilisk, a creature which at level 1, using the optimal taming method, takes two and a half hours. For a 120, which is the level any self-respecting survivor will go for, up that time to five hours. Obviously, these are 1x rates, so on a boosted server they won’t be that bad, but I never understood why these tames that took so long were implemented, and yet were common enough that looking through my tribe log would show that I had killed or been killed by one. 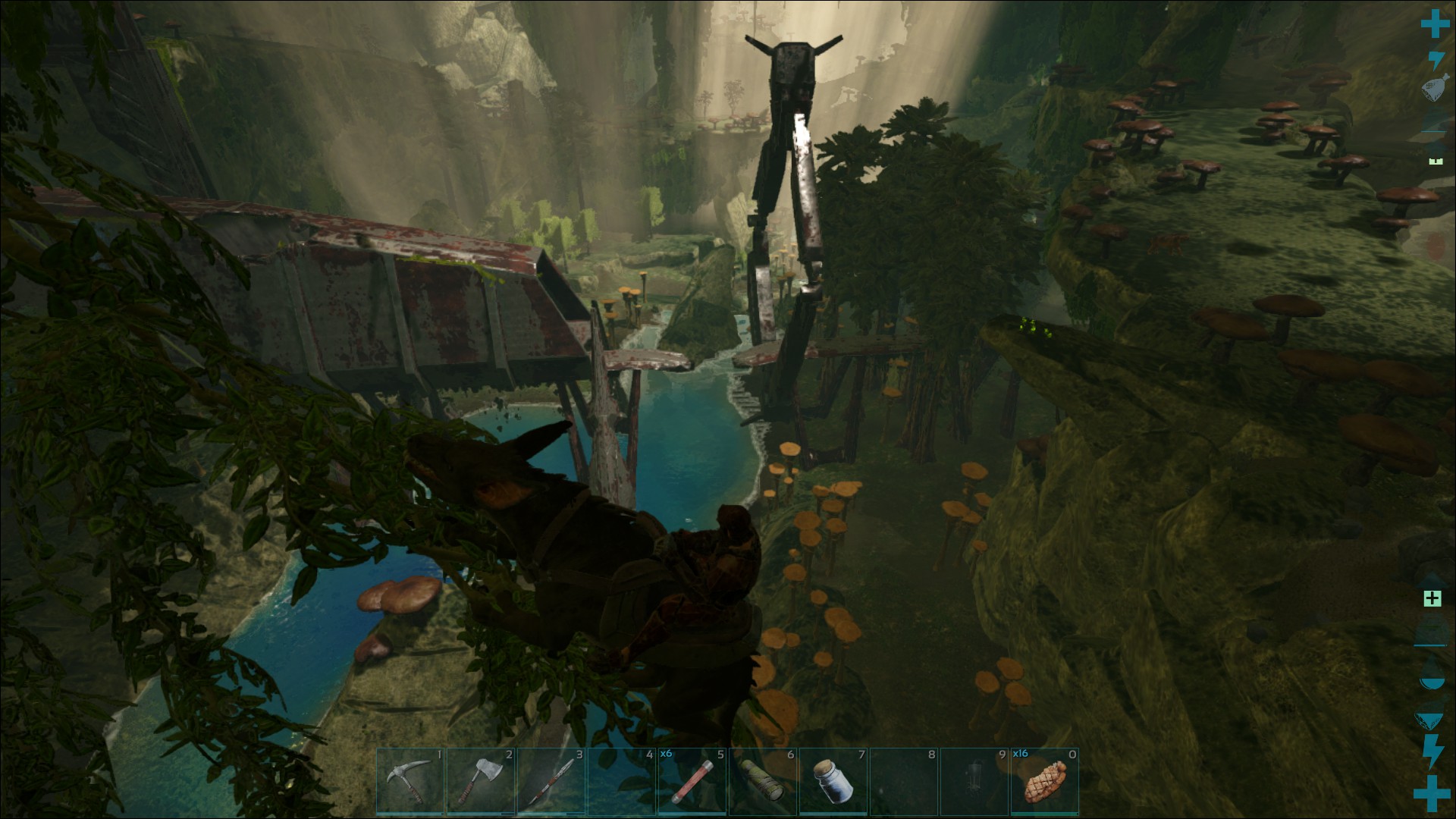 You get other dinosaurs from the base game such as the ever-faithful raptor, but no flyers. These dinosaurs also have nice glow-in-the-dark colourings as well, which might make them useful to trade to people who don’t play on Aberration, or just take back to the island. One downside to this is that they’re really obvious, so raiding on them might not be the best idea if you’re after stealth.

The new items are also pretty neat, but they really upset the balance of the game, particularly raiding. Once people hit a certain level, they can raid any base they desire so long as they have the explosives to blow the walls open – getting access to the base is no longer a problem. This is thanks to four items, among others: the zipline, zipline motor, wingsuit, and climbing axes. The axes allow you to climb any wall, and allow for 64 ‘jumps’ across the surface, more than enough for you to climb over a behemoth gate. The zipline allows you to glide into someone’s base, and out of it if you have the motor, and the wingsuit allows you to literally throw yourself off a cliff to avoid attackers. Once I had a really cool chase, where someone was flying after me to try and reclaim stolen goods; however, my superior flying skills allowed me to evade him. And if turrets pose a problem, just get your crab and chuck a turtle over the walls, ready to soak up all the bullets while you and the posse destroy the generators. Glowsticks are also incredibly useful, being portable light sources which are cheap, can be thrown, and stick to stuff, as seen below, when two guys who haven’t even progressed into stone have the resources to waste almost three hundred glowsticks, only a few of which landed in the house. 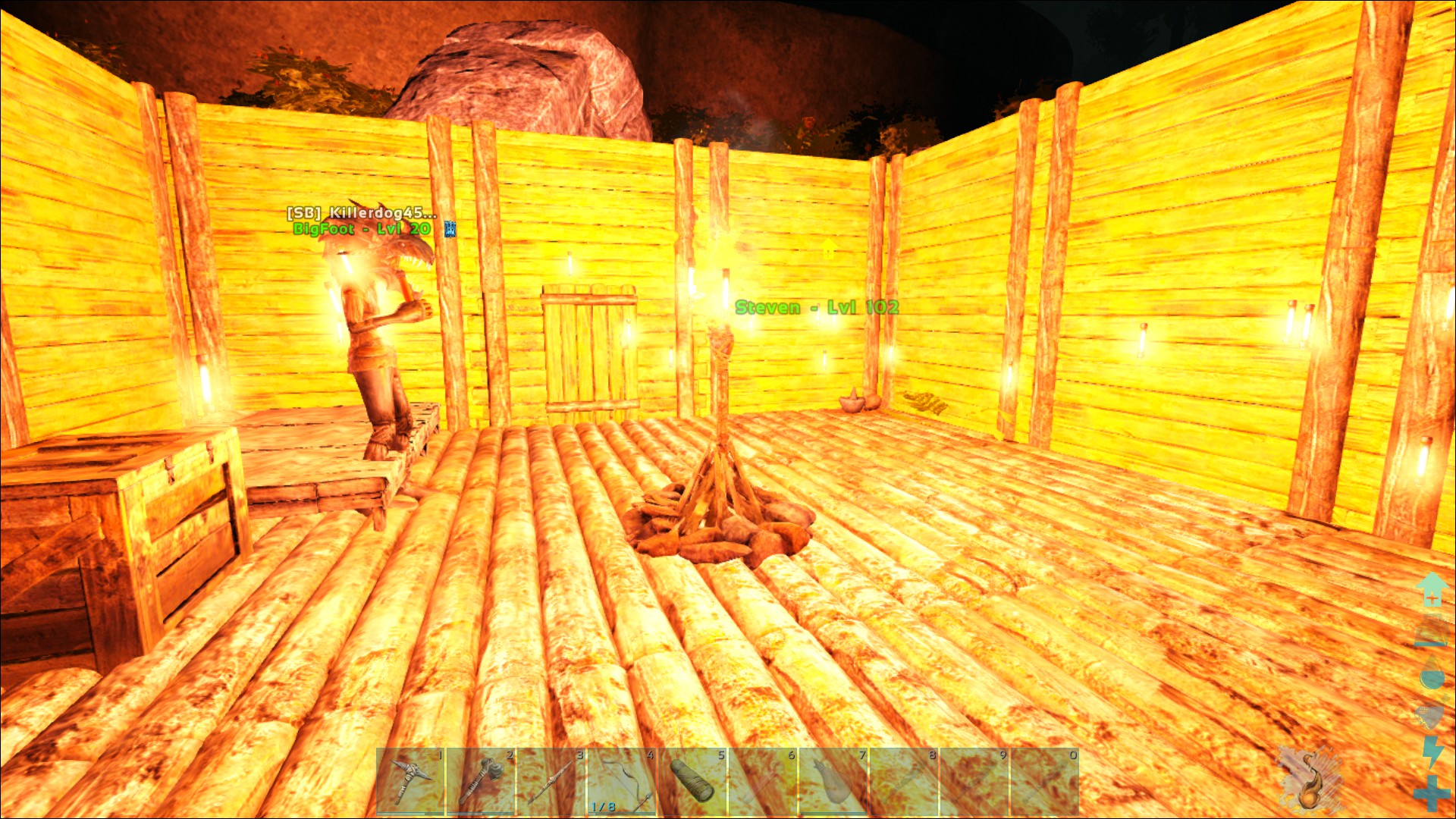 All in all, Aberration is not a bad map by any means, despite all the flaws I seem to point out; as someone once said, we’re most critical of the things we love, and I love Ark very much. I would wholeheartedly recommend any player who already plays Ark a bunch to buy it, and any new players to try out the base game first before you play on Aberration. I was told that the map is balanced for level 50 and above, which, considering that the Ravager saddle is unlocked around level 49 and the climbing axes at 36, makes sense. Either way, it’s a really fun map, and I would love to cram this article with more screenshots displaying the newest additions to Ark, but half the fun is figuring it all out. That and I woke up to half a base and all my items gone. They even killed Shaun.