From Diablo creator comes It Lurks Below

New sidescroller with aspects of Terraria, Minecraft and Diablo combined!

New sidescroller with aspects of Terraria, Minecraft and Diablo combined! 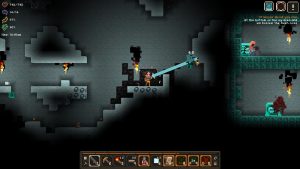 David Brevik, creator of Diablo has recently announced his new independent game via his new studio Graybeard Games, It Lurks Below – A 2D sidescroller heavily inspired by the likes of Minecraft, Terraria and Starbound. With the amazing RPG mechanics he pioneered with Diablo, this is his first major release since 2013. It Lurks Below will feature an indie pixel art/retro aesthetic, with Brevik working on the title since 2015.

A closed beta will begin on Friday, February 2nd and will end Monday evening February 5th. David Brevik will also be streaming It Lurks Below throughout the closed beta period and promises to randomly surprise beta players who are checking out the game. With his previous work as CEO of Gazillion Games (developer of Marvel Heroes), here is what Brevik had to say about how he is feeling with the transition.

“Though I certainly had creative influence as CEO of Gazillion, I feel like I’m finally right back where I belong, actually getting my hands dirty and creating great games. It’s humbling going from large teams making content based on huge properties like Marvel to a one man team with a brand new idea no one has heard of yet, but I am loving every minute of the process. It’s all very exciting and a little bit scary, too. I’ve always been a huge proponent of community involvement in game creation and I heartily welcome all feedback from players and Twitch stream viewers. Anything that can make It Lurks Below the best it can possibly be.”

It Lurks Below is set to release some time this year on Steam, with no official release window as of yet. For those interested when Brevik himself is streaming the game it will be available at the official Graybeard Games Twitch channel and will be streaming on Friday 9pm – 11pm PST, Saturday 3pm – 5pm PST, Sunday 10am – Noon PST and finally Monday Noon – 2pm PST.