This folktale is a disappointingly cumbersome artistic masterpiece.

This folk tale is a disappointingly cumbersome artistic masterpiece.

Where The Water Tastes Like Wine is a conglomerate of real and not-so-real American folk tales put together into something that’s very difficult to describe. It’s part exploration and many parts narrative-driven adventure, with some minor RPG and survival elements. Where The Water Tastes Like Wine (‘WTWTLW’, from now on) is a bold, authentic and ambitious experiment from Dim Bulb Games that fails in a lot of aspects but greatly succeeds in others.

The game begins by putting us in the shoes of “The Vagrant”, who wanders the United States of America in a folkloric, romantic manner. We enter a tiny shack on the northeastern corner of the country and join a demonic high-stakes poker game. Hands fly away until just two players remain at the table: us and the shady host of this event. When we’re ready to show our winning royal flush, our hand transforms into some sort of tarot cards and our opponent shape shifts into a wolf that tells us that we had “a good hand, but not for this kind of game”. 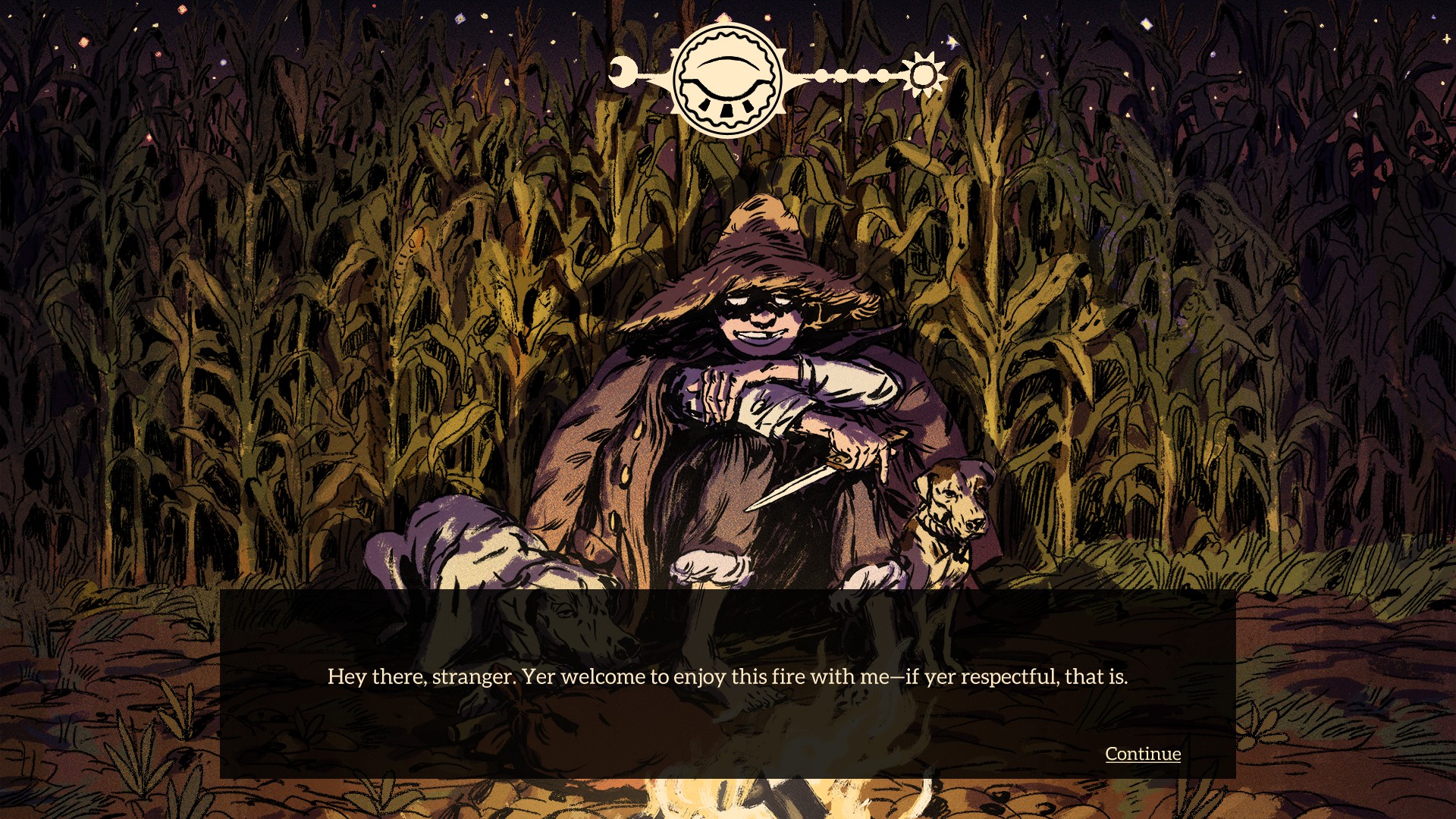 As losers, our way of paying our debt will be to explore the vast territory of the United States collecting stories told by its people, take them with us in our journey and share them. We are to see how they change in the making, merging with the people who tailor it to fit their fears, hopes and imagination. It’s a poetic way of reflecting the true nature of the origins of the United States, its culture and unique little parts that conform it (which, by the way, also applies to any other country in the Americas).

We’re also stripped of our skin so we look like a skeleton vagrant, one who still feels pain, hunger and exhaustion. 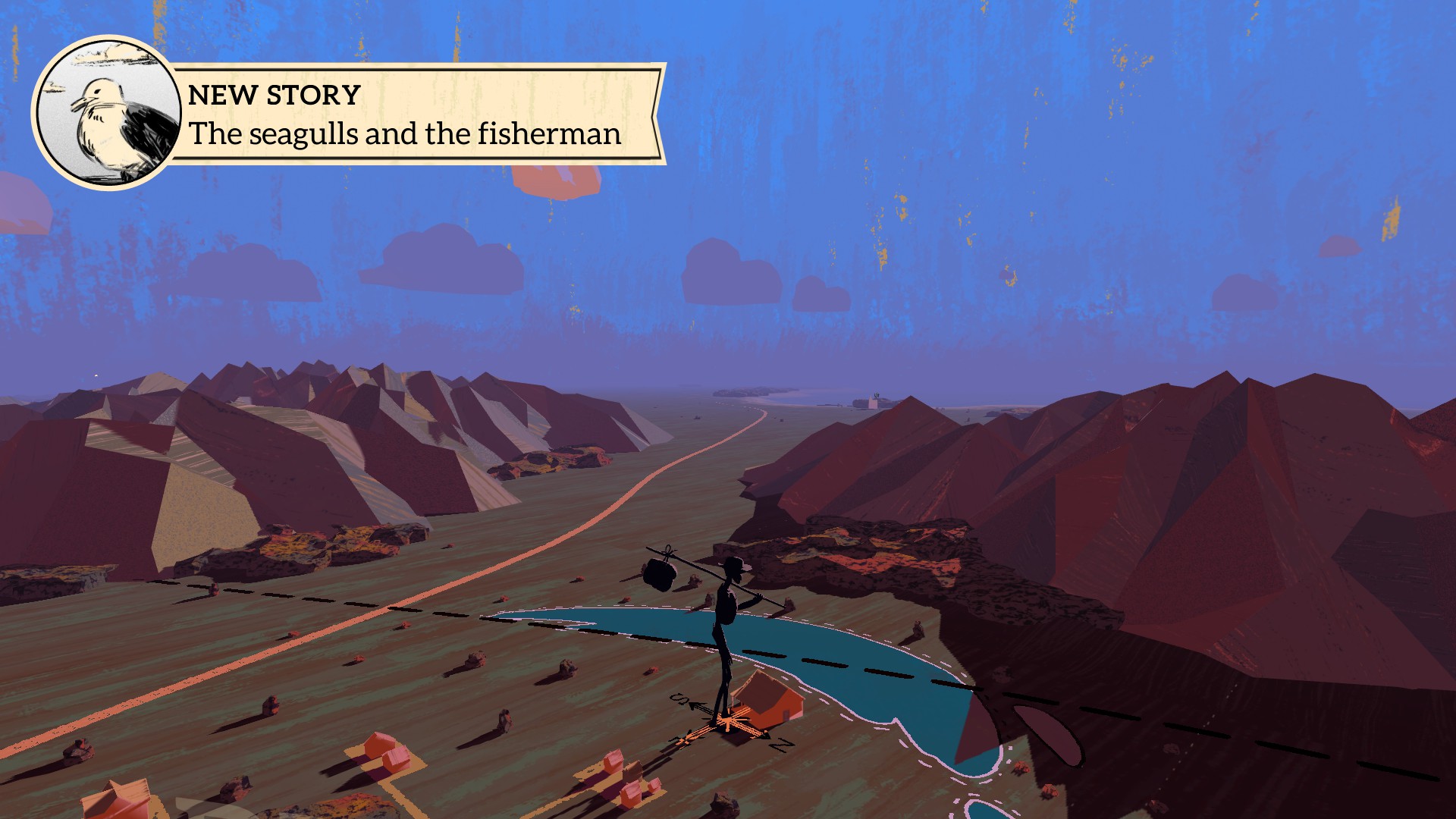 Introduction over, we’re presented with a huge map of the country absolutely filled with little icons and locations to visit where we will hear a biblical amount of stories tainted with hope, fear, fantasy, excitement and comedy. We’ll collect those stories and hear them being told again and again, morphing into new, over-the-top versions of sometimes futile and other times genuinely interesting events.

What’s the point in all of this? Well, there are special characters who drive our journey that we encounter by campfire in scenes accompanied by an incredible soundtrack and amazing hand-drawn graphics. The aim is to tell them what they want to hear using our collection of stories, and convince them to open up to us, tell us their life story and… well… let’s not spoil any endings and just say that the pleasure is in the journey.

A lonesome boy that travels by hopping trains, a working mother abandoned by her husband and children, a blues singer who made a deal with the devil, an army man who became a preacher and a Latin American woman trying to find her future are just some of the main storylines we’ll follow in order to progress in the game.

Some may say that WTWTLW is really just about the joy of exploration, getting to know the different regions that make the United States, collecting little stories and just enjoying the ride. But let’s be honest, most players will want to make some real progress and see the finish line at some point. That’s where WTWTLW feels pretty dense.

If you don’t have money (earned by fortuitous events or by finding jobs at a big city) you won’t be able to travel long distances (there is an option of illegally hopping trains, but that could result in getting caught, beat up and killed, having to start over at the last big city visited). Walking is slow and tedious even though there is a kind of mini-game where our character can whistle the amazing soundtrack songs and if we follow with the right arrow keys, then he’ll walk faster.

Opening up the map and looking at where we want to go next, seeing it’s miles away and that we have to walk to it can be very, very frustrating, considering that the world map is not particularly attractive. The beautiful hand-drawn art that makes this game really special comes in little bits and pieces through encounters, but the world map is just a 3D environment with not much to look at.

Don’t get me wrong, many stories are super immersive and interesting, but at some point I found myself skipping the slow narrations provided by Sting (yes, THE Sting) in order to collect that new story and get on my way. And I love narrative-driven stories; that’s what gaming is all about for me. But somehow WTWTLW just took it too far, being too slow and too cumbersome. 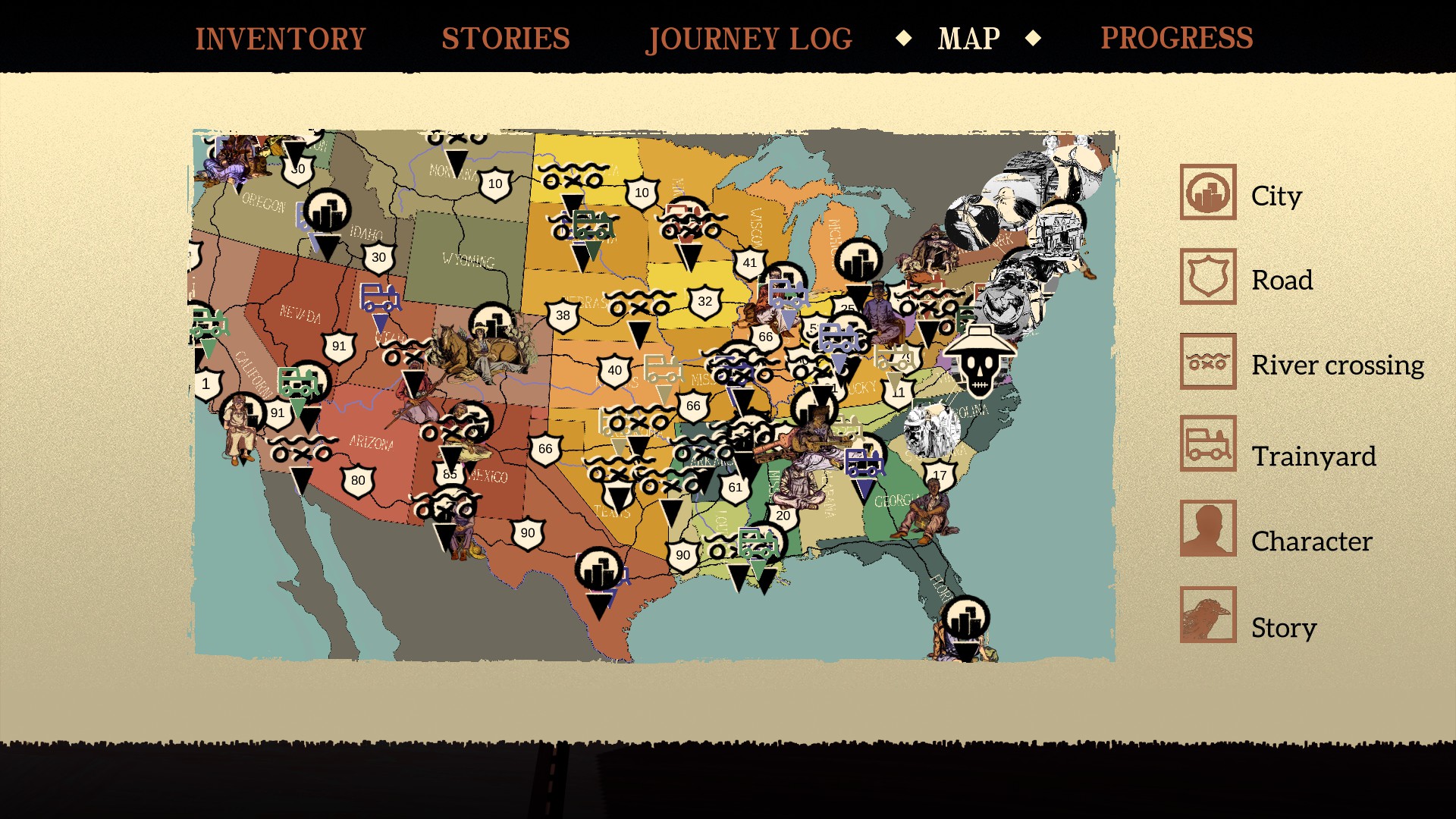 Chasing these main characters to their new locations once an encounter is complete is a drag, especially during the late game, where we’ve collected most of the little stories breadcrumbed around the country and we’re just missing the last few main encounters. At that point, the whole map is an empty vessel in the way of our desired finish line. Above that, taking care of hunger, sleep and health sometimes feels out of place in this type of game. Big cities are the only places where we can buy food or earn money and thus replenish those aspects.

I must make a shout out to the music composer for WTWTLW, Ryan Ike. As we’ve already said in this article about the musical revolution in indie gaming right now, WTWTLW does a fantastic job at creating immersion and the perfect ambiance for each area of the United States. It tailors its album (yes, it’s not just a soundtrack) to fit each special encounter and campfire with a personalized score that envelops every single one of those core characters to the bone.

Singers Joshua Du Chene, May Claire La Plante, Jillian Versa and Akenya Seymour, amongst others, absolutely own their songs. “It’s a mixture of people that I knew in my community and from deep dives into the internet to find performers and really lucking out. I never had to ask for a second take”, said Ike during an interview that we’ll soon publish in its entirety. 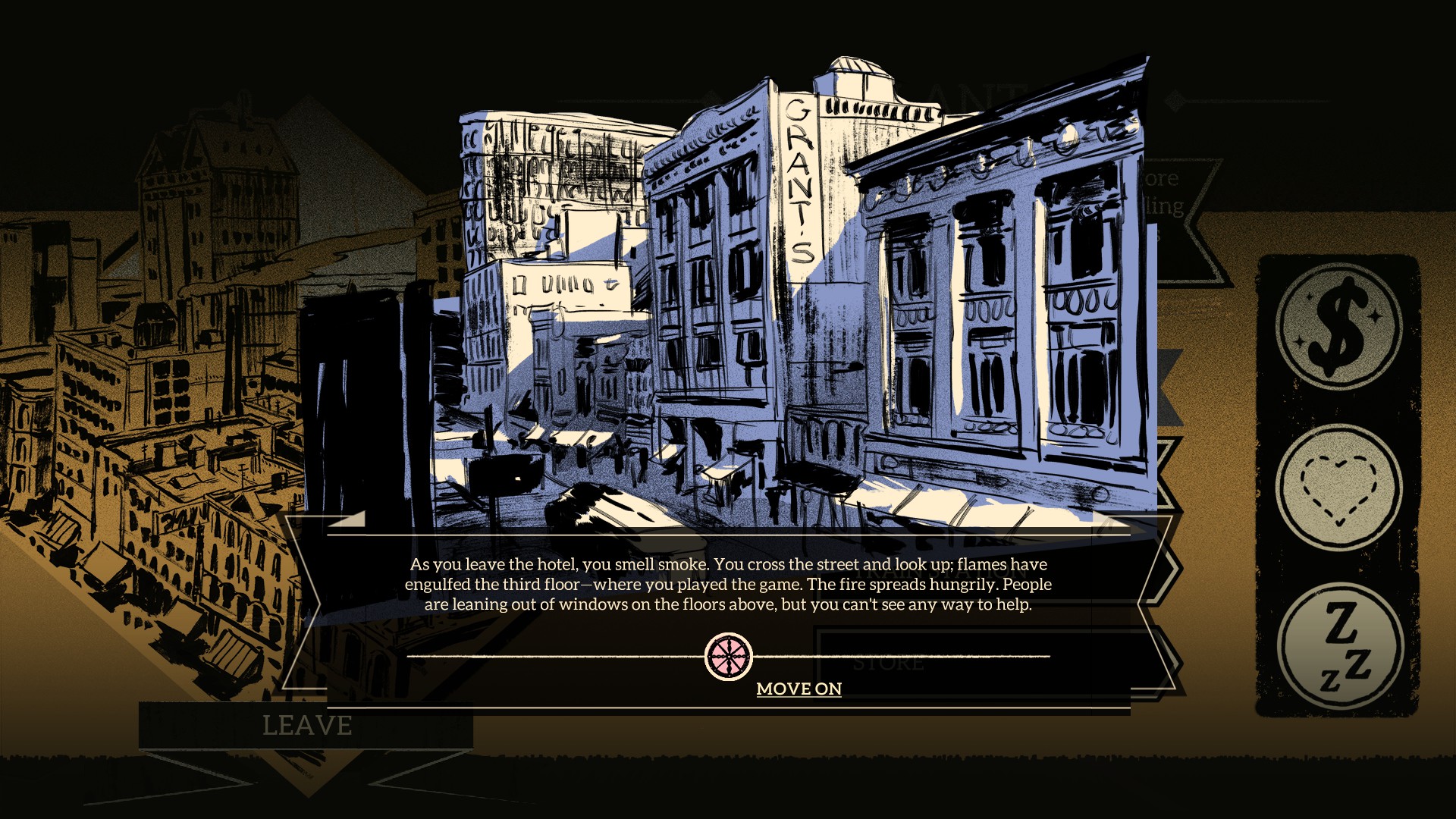 “As you move through different regions you’ll hear the song appearing with different iterations. In the Southwest it’s going to be more a Mexican inspired track and in Spanish. In the Midwest it’s going to be kind of Scandinavian themed and in the South is a folksy-guitared version. I love the idea that as the music travels, and it’s shared with other musicians, it changes and takes a life of its own. It’s a lot of what this game is about,” explained Ike.

To surmise, I really enjoyed the premise and overall thought process that conceived WTWTLW, its mission of portraying the United States’ multicultural experience and the importance of storytelling through history to craft identity. Unfortunately, the core gameplay is too slow and repetitive for a casual gamer to get involved or care for it. Nonetheless, the hand-drawn art style and music score are absolutely worth the gamer’s (and general people’s) attention.