Can you thrive in Vinland? 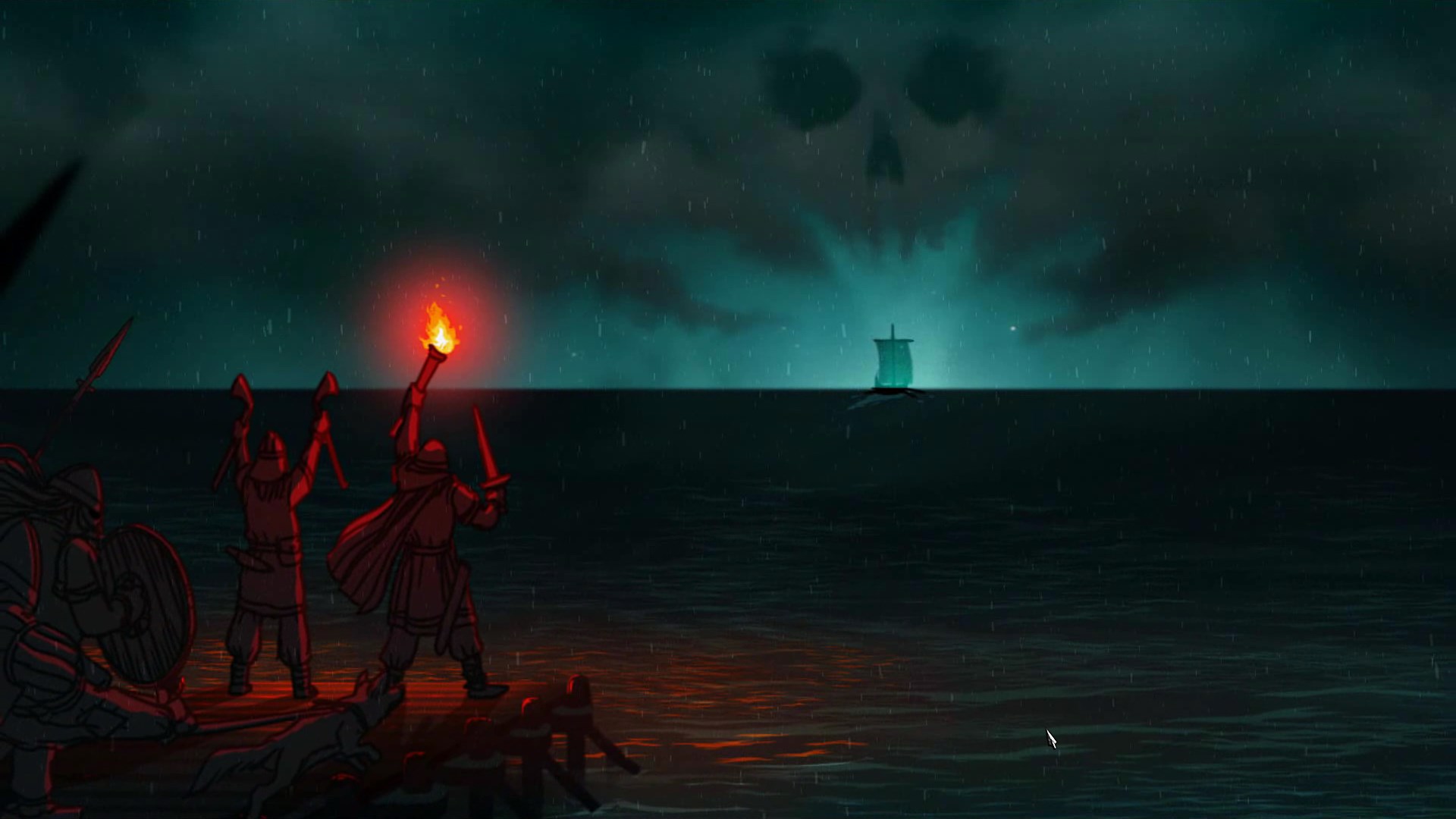 Dead in Vinland is a sort of sequel to CCCP’s last game, Dead in Bermuda. Three hours in, the game’s mechanics, the music, and the characters began to embed themselves in my brain. I never thought I’d become hooked, but here I am, 35 hours in.

On the surface, the constant RNG, which is pervasive in almost every aspect of the game, could be a turn-off to a lot of people. While it is frustrating at times (and I’ll talk more about RNG later), it’s also greatly satisfying to improve your skills, complete objectives, and see your community thrive.

The story is pretty simple. Vikings get angry at Eirik, the bastard son of the Jarl. Vikings drive Eirik and his family from his home and burn his house. Eirik’s family flees to the port and steals a ship. Eirik’s family sets sail in the ocean, with no destination. Eirik’s family miraculously find a mysterious island, with no idea if it’s inhabited. Eirik’s family is beaten up by Bjӧrn and his band of bullies, and are forced to pay tribute every seven days.

This is just the beginning of a huge story that slowly unravels over the course of god-knows-how-many days, and there are also many possible endings (seriously, I’m 35 hours and 75 game days in and I’m still not even close to completion).

You play as a family of four: The father Eirik, his wife Blodeuwedd, their daughter Kari and Blodeuwedd’s sister Moira. Each of them have their own personalities and flaws. For instance, Eirik is a loyal father, but he has lasting remorse for what he’s done to earn the wrath of his kin. What he did exactly is a secret.

There are ten survivors in the island who you can meet and invite into your camp to help perform basic tasks. Each of the survivors have secrets that you can only find out if you keep them around long enough.

Your peoples’ skills are logically related to their personalities. For instance, you wouldn’t want to send Blodeuwedd hunting because she’s a stay-at-home mom. She would become tired way faster and she wouldn’t collect as much meat as Kari. 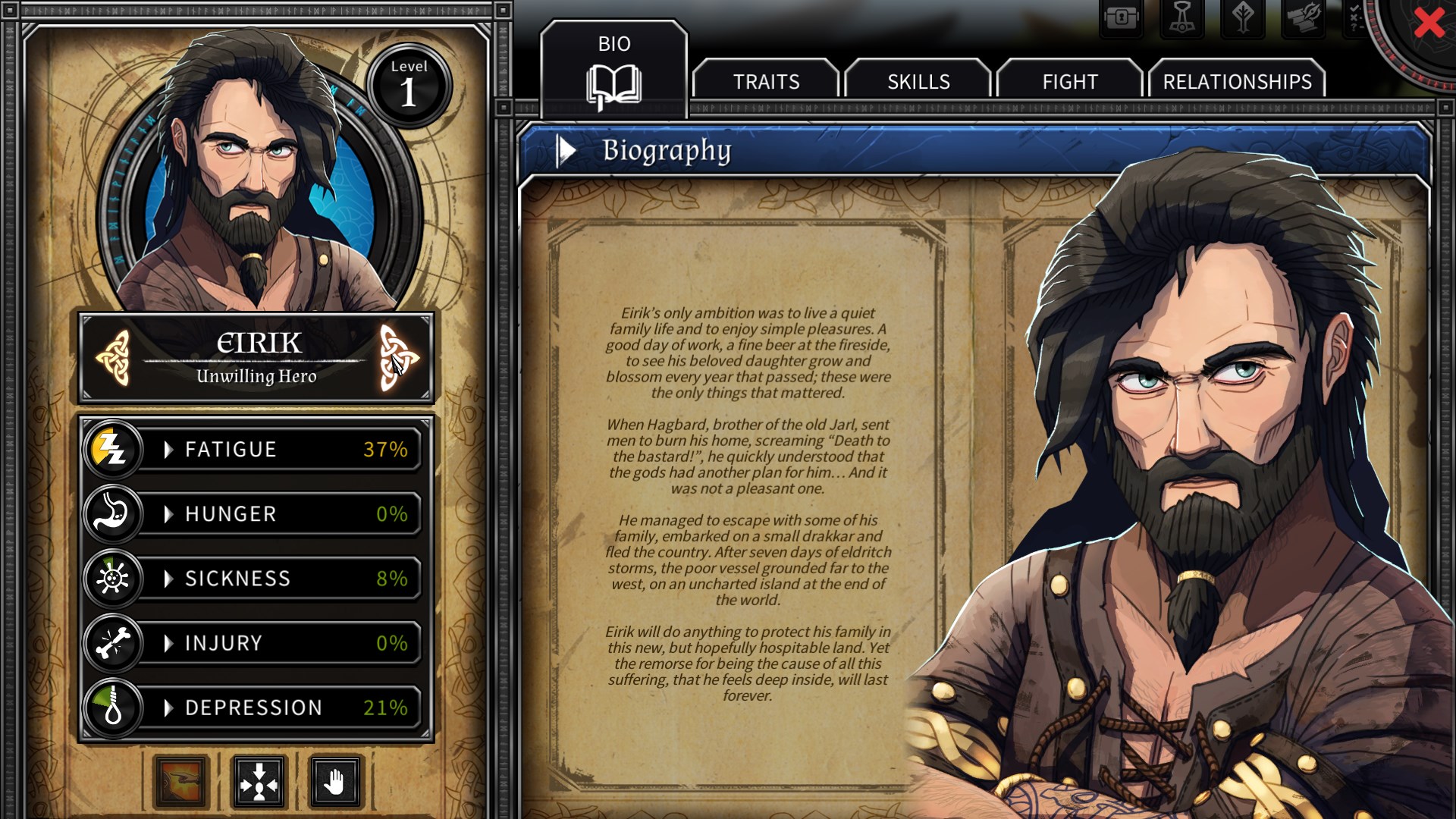 Each day has two of these cycles, one for the morning and one for afternoon.  In the evening, you end the day and find yourself inside the shelter where all the characters spend the night. After a couple of short conversations, you have to decide how to share your food and water supplies.

Nighttime is the perfect time to take stock of the various survival meters. Each person has five meters: Hunger, fatigue, illness, injury, and mental health, and if any one of these meters reaches 100, that person dies. Each night, these meters go up and down for various reasons. Hunger always goes up, and fatigue always goes down, but also their illness goes up when they’re sick, their depression goes up when they’re depressed, their depression always goes down once you have a certain upgrade, et cetera.

Since Dead in Vinland is very, very long, it’s especially important that it has good art style and music since you’ll be looking at them for a very long time. The game has animated environments with cardboard cutout characters. It looks a little funny, but overall I think it looks absolutely fine.

Then there’s also the music. In any super-long game the music is bound to get repetitive at some point, but what’s important is the quality and variety of the music tracks. The music makes you feel like you’re really a colonist trying to make a life for yourself, which is great for what the game is trying to accomplish. 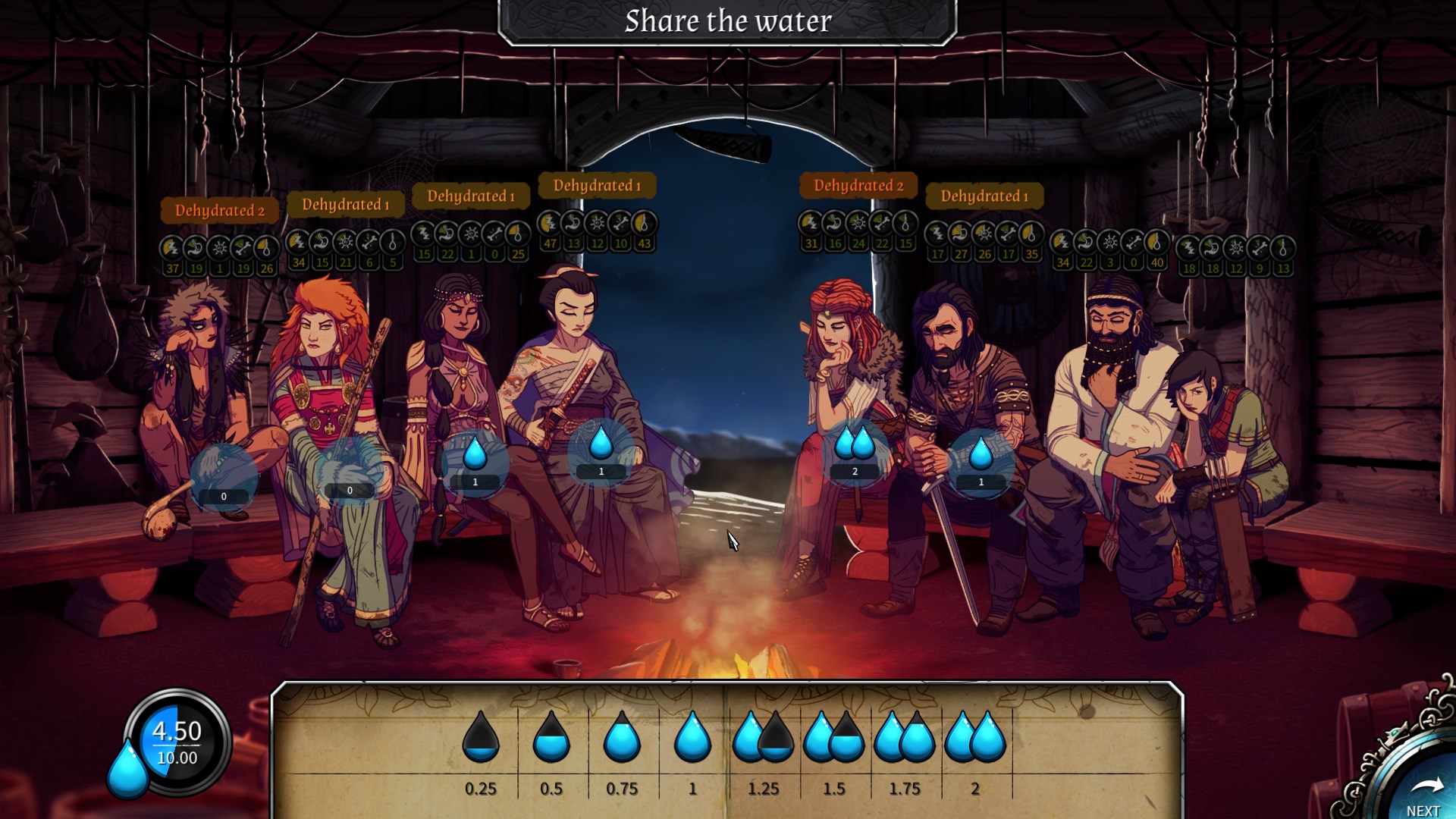 There’s a tactical, turn-based battle system, not unlike what you might find in Final Fantasy or Pokemon. Battles are 3-on-3, and you have five different moves to make use of, as well as five different fighting classes that each have their own unique properties. Each turn you have a set amount of AP, so you can keep on using moves until you run out of this.

For instance, Kari is a ranged user who is fragile, and her moves use the most AP. However, she has the highest accuracy, hits enemies in the back row, and her critical hits deal the most damage. Eirik, the warrior, has the highest damage output considering that he only has to use 3 AP to attack. 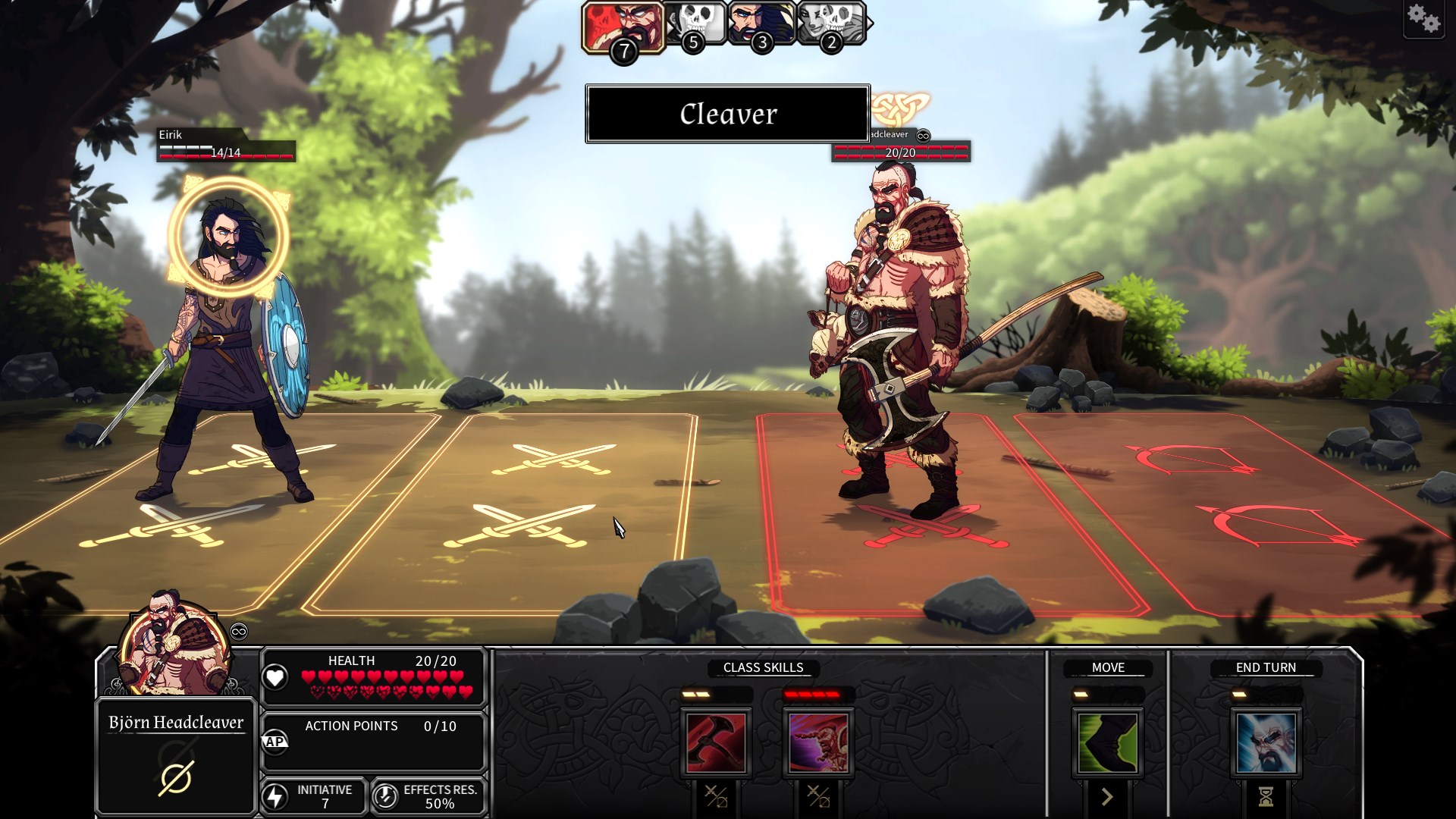 There are 129 upgrades to craft, and 14 stations to build within your camp. In order to really progress, you need to be as efficient as you can performing basic tasks like gathering resources, building upgrades, crafting useful items, and even resting your characters. You’ll be checking your characters’ stats screens often, making sure they perform tasks suitable for their skills.

These basic tasks are also where RNG comes in, for better or worse. The good news is that when you have enough RNG for a long enough time, it eventually evens out. The bad news is that there are certain events on the island map that require luck to be successful, but losing the dice roll means losing out on valuable items like Fire Stones and Forgotten Knowledge. Thankfully you can just restart from the previous day if you really want to get your hands on these rare items. Unless you’re playing Hardcore mode, of course.

Dead in Vinland does suffer from repetitiveness. If you had a way to radically speed up the basic tasks, this would be a big improvement. 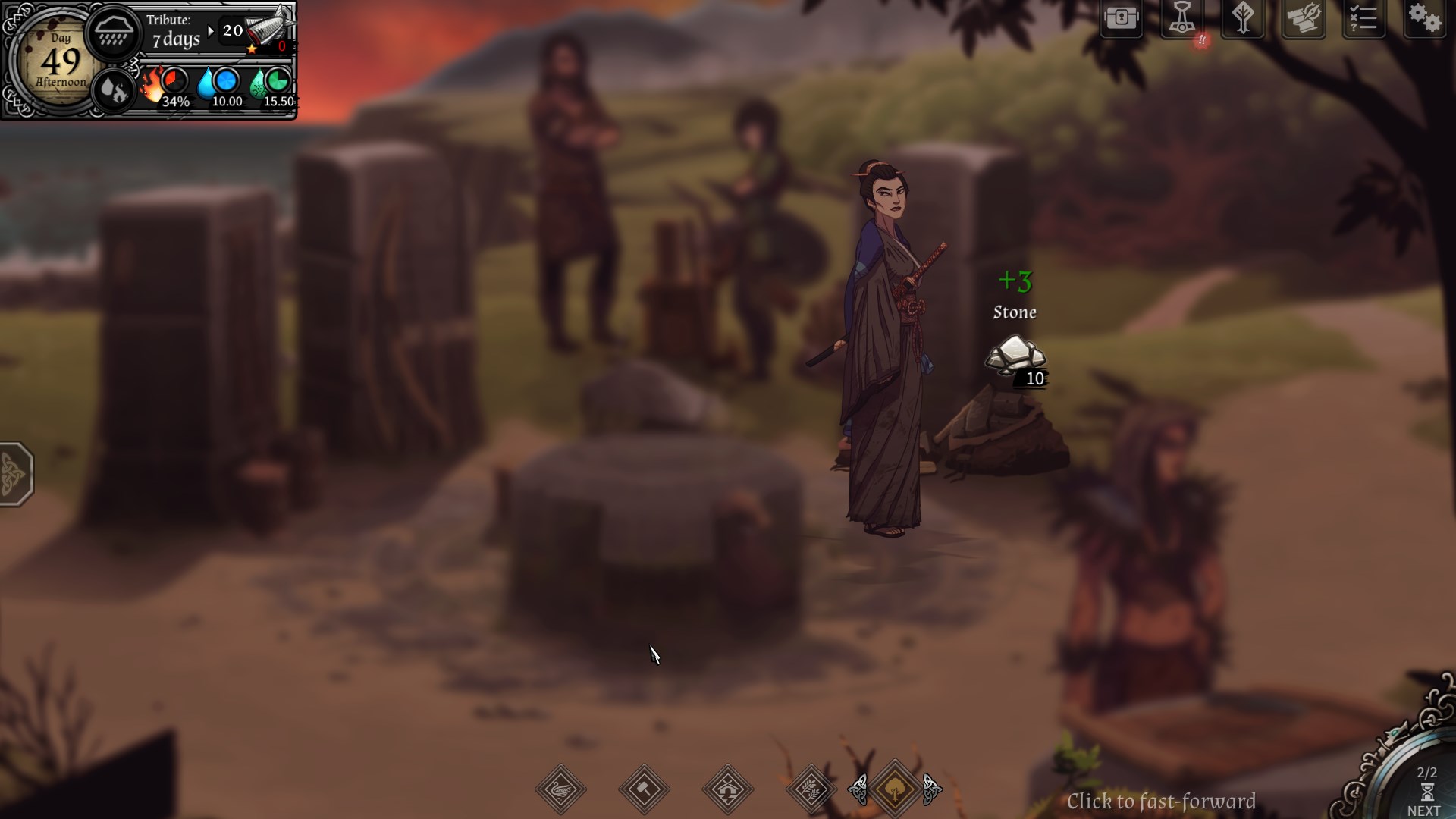 Playing Dead in Vinland is long, and hard, and tiring, much like it is to be an actual colonist. It’s also a lot more addicting than I thought it would be. Part of the reason why I kept on playing was because I really wanted to know what would happen to characters like Kari and Moira.

The other reason I kept playing was because I really wanted to reach milestones, like building every camp station and finding Bjӧrn’s camp. The game’s difficulty is definitely a factor as you’ll probably die and be forced to rethink your strategy. On my first playthrough, my Moira died on day 4 because she became too depressed scavenging the shipwreck. Each time the challenge became too much for me, I was forced think about what I could have done differently. For instance, I learned that it’s extremely important to build the tavern and the rest area early on, even before securing a source of food.

Dead in Vinland is not an easy game, but it can definitely be overcome if you think about what resources and upgrades you need, and how to allocate the people in your camp to overcome the challenges the game throws at you.