How not to flirt in “everyday scenarios”.

How not to flirt in “everyday scenarios”. 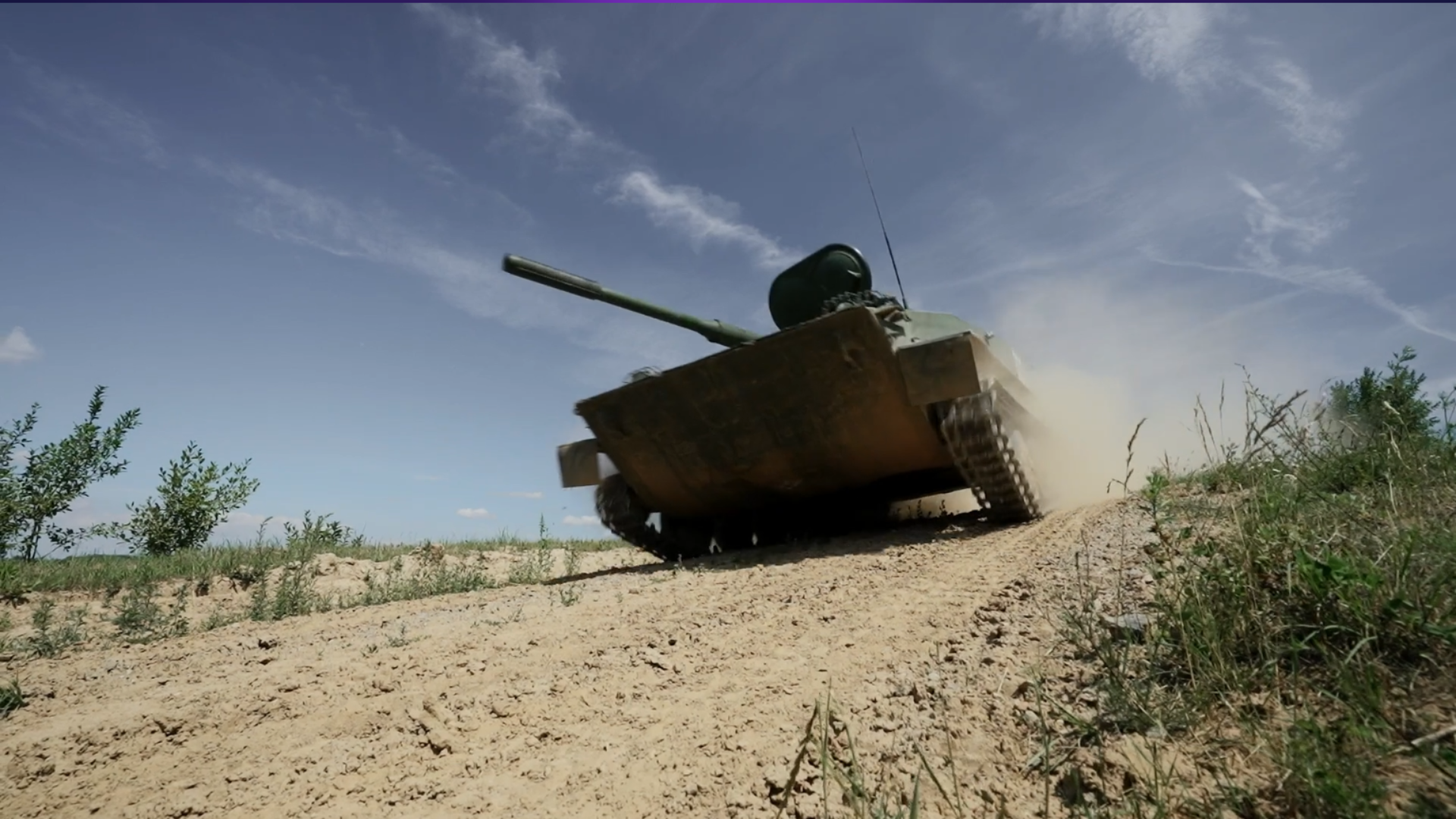 Let me begin by reassuring you that the above image is, in fact, from Super Seducer 2: Advanced Seduction Tactics. This is one of many of the everyday scenarios that you’ll encounter whilst essentially controlling the game’s creator, Richard La Ruina (or one of several other characters), whilst trying to improve your own seduction and flirting skills. I’ll also begin by stating that, as someone who has been in a relationship for eight years, I imagined there would be a whole load of new moves and chat up lines I’d never heard of before. I wasn’t entirely wrong.

The game sells itself as being able to improve your social skills and transform your love life. This can only really be accurate if you’ve never interacted with other humans before. The correct options to pick, allowing you to progress in your attempts to successfully win over your current target, are usually blindingly obvious – due to their stark contrast with the obviously wrong yet often hilarious counter options.

For example, in the game’s opening chapter, you decide how to approach a woman. You can try the silent approach, creating mystery and intrigue. You can instead however, be much more blunt, unzip the fly on your trousers and poke a finger through the opening, gesturing to her with it. 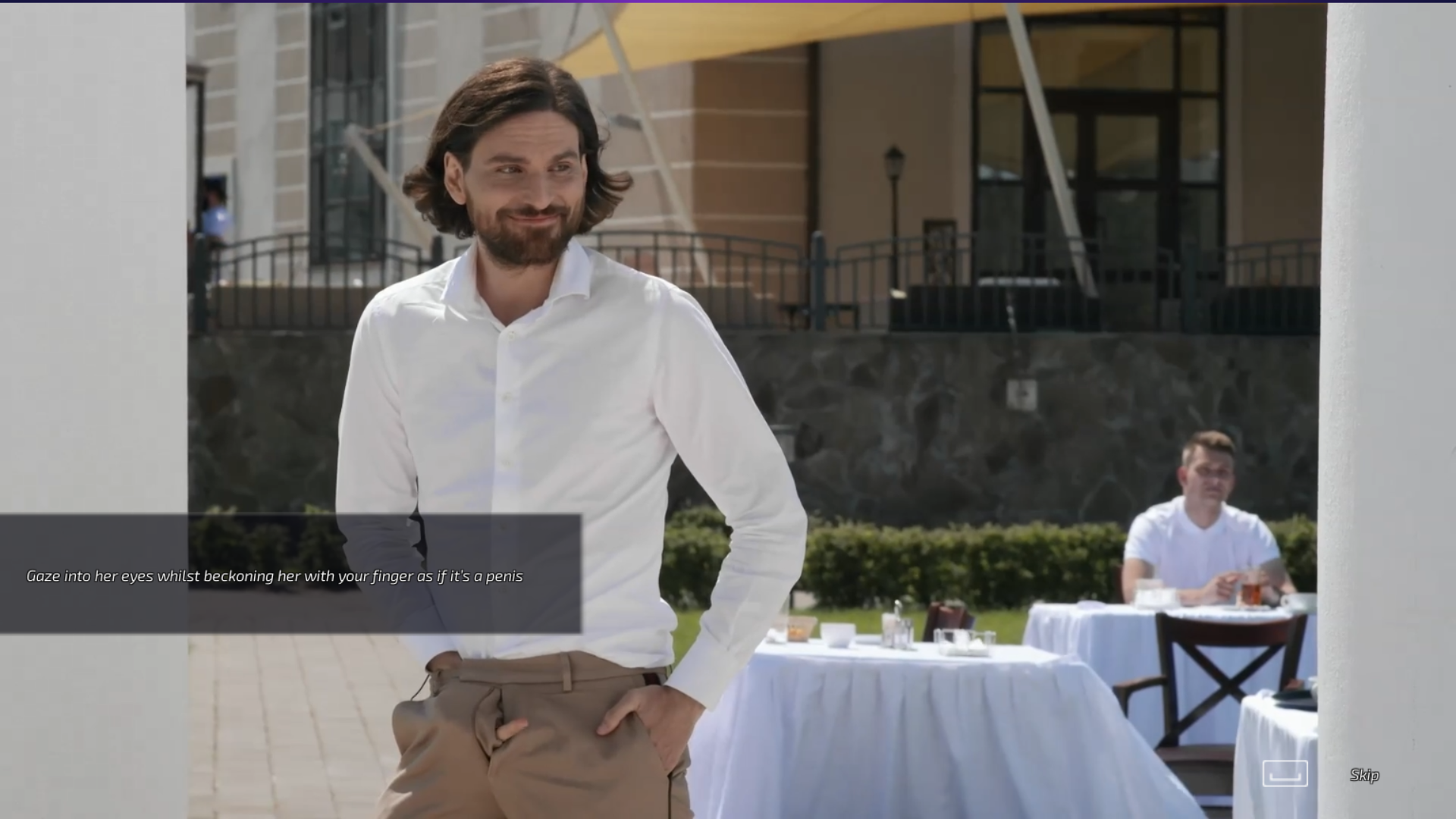 It was at this point that I struggled to decide whether the game is meant to be played for obtaining dating advice. Richard, when speaking publicly, seems to believe that it can actually help people with dating and meeting new people, drawing upon his long experience as a “pick-up artist”. The downright weird scenarios that the game places the player in, as well as some of the options (that would undoubtedly warrant a criminal conviction in some cases) and the acting style would suggest that much of the game is meant to amuse rather than educate.

Speaking of acting, this is one of the weaker points of the game. Oft times it is rugged, cringey and unbelievable, which does affect the experience somewhat, given that this is the entire premise of the game. Some of the lines of conversation that aren’t chosen by the player, such as getting some stem cells to improve back pain, are also accepted as entirely normal by your potential partner. Hopefully, anybody playing this game with the aims of improving their social skills won’t think that it’s entirely normal or acceptable to discuss, at length, the gameplay mechanics behind the indie game Genital Jousting.

The first Super Seducer only launched six months ago, and in some ways it shows. Richard has clearly picked up on a lot of the criticisms of the first game, that it’s unrealistic, doesn’t offer helpful advice and is sexist. This time around the game is even more unrealistic (unless you happen to be the CEO of a large pharmaceutical company), offers even more unhelpful advice (telling the secretary that you just hired that you had sexual dreams about her) and is, perhaps, even more sexist (hiring the secretary in the first place because of her looks).

It’s hard to tell whether Super Seducer 2 is encouraging any of this behaviour. Again this comes down to whether or not the game is actually attempting to offer dating advice. It is worth mentioning, however, that choosing any of these options will be met with Richard and his female co-host explaining why this was (obviously) a bad choice. Perhaps the aim of the game is to poke fun at people who behave in this way rather than suggesting the best way to meet a woman is to expose yourself. 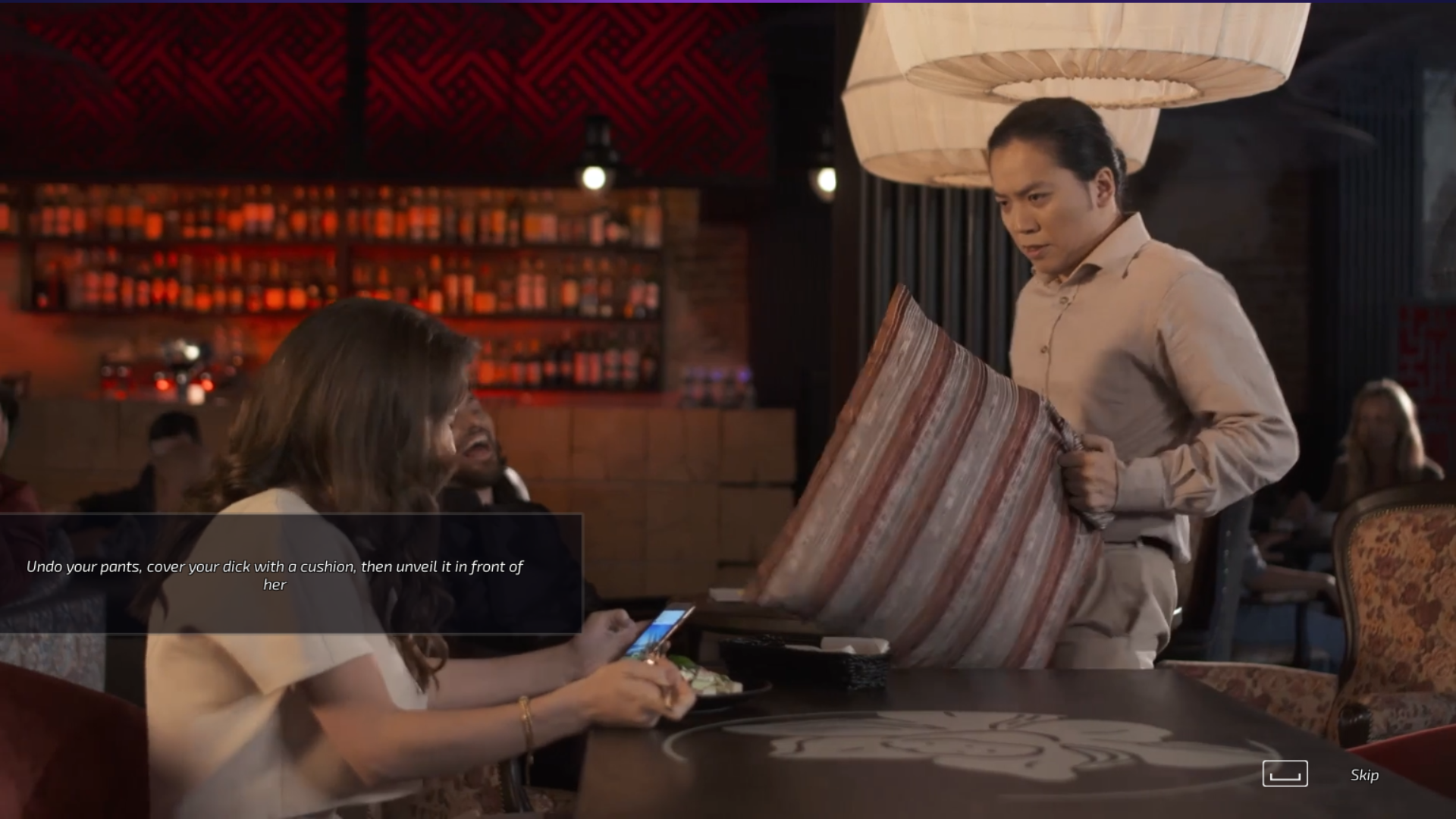 Even if one assumes that the game is to be played ironically, some conversations just don’t make much sense. Take the two characters in the image above, an attempt at introducing diversity to the game’s cast as a result of criticism on the lack thereof in the first game. Playing as the Chinese man, you can tell the white woman you’re attempting to pick up that Asians often view western women as sloppy and not as feminine. And that’s the correct option. She even goes along with it and admits that she probably is sloppy. There are also a couple of occasions where your choice of dialogue doesn’t reflect what is said in game, or even where the same option is present twice.

There’s little difficulty in passing each of the chapters in the game, but there is fun to be had in completely exploring all of the options possible throughout each one. This could have been improved by allowing you to back to each choice in the chapter, rather than on completion having to go back from the start. Videos can all be skipped, but this still takes time when all you want to do is to go to the middle of the chapter and see what happens if you decide not to blow up all the critics of the first Super Seducer game with a missile launcher. 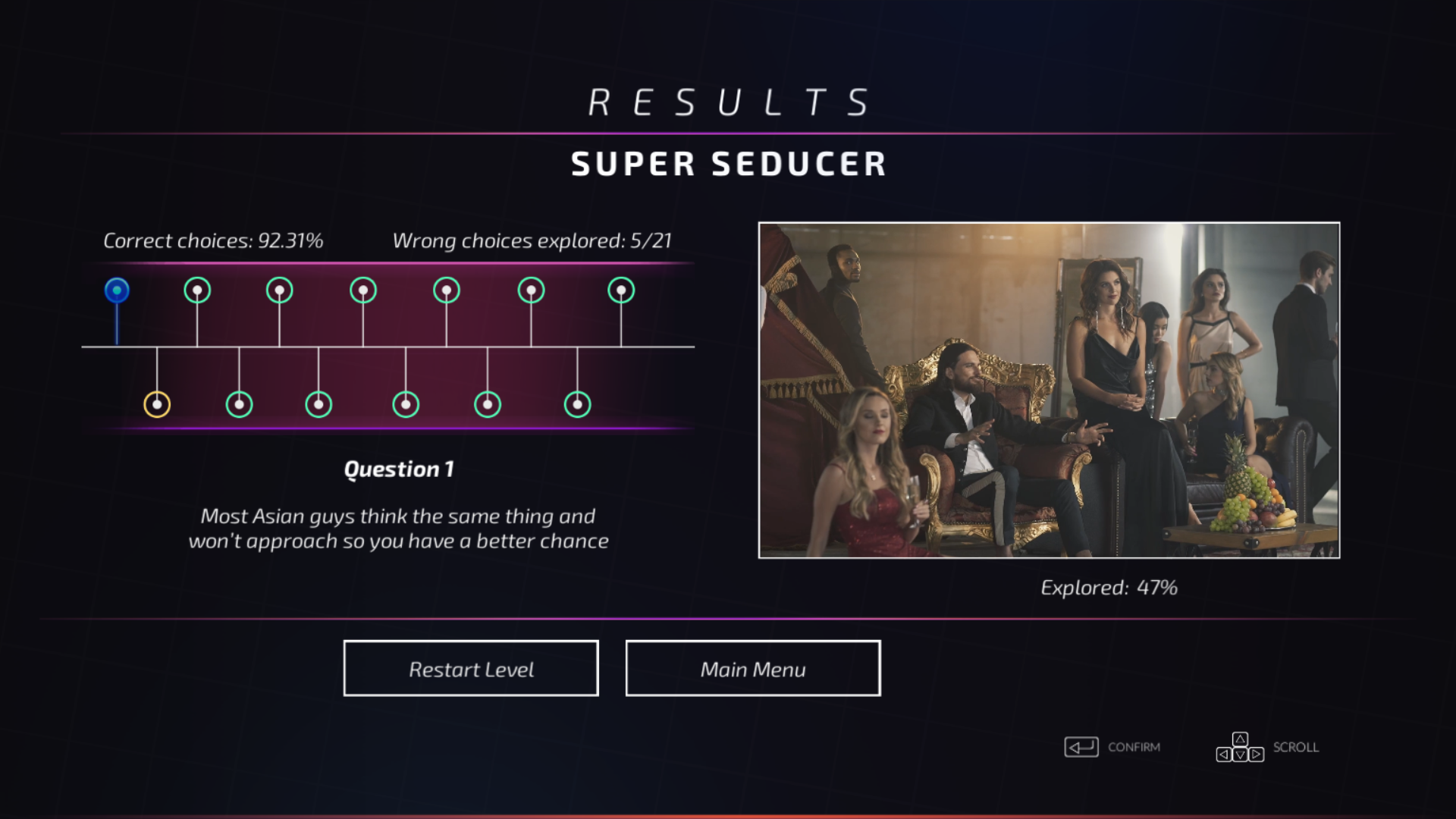 I’ve no doubt that some of the content in the game will be offensive to some players, especially if they’re not expecting it to be a satirical take on dating. Super Seducer 2 isn’t for everyone. Despite attempts to improve diversity amongst the cast, and to offer a female perspective on the game, this seems to be as a response to previous criticism rather than the genuine desire to include characters of different races. That being said, the game does offer some genuine if not ridiculous laugh out loud moments, even if they are at times hidden under a thin cloak of providing social advice.