Maia is a passion project from one man, Simon Roth. For over six years, loving details have been injected into every barren crevice of his strange world. Countless light sources, thousands of lines of unique (and hilarious) text, and systems upon systems upon systems.

An unfortunate side effect of solo development, however, can be a narrowing of production vision. Details are all well and good, but if the foundations of a game result in an average experience there’s no amount of colonist slam poetry competitions that can save it. 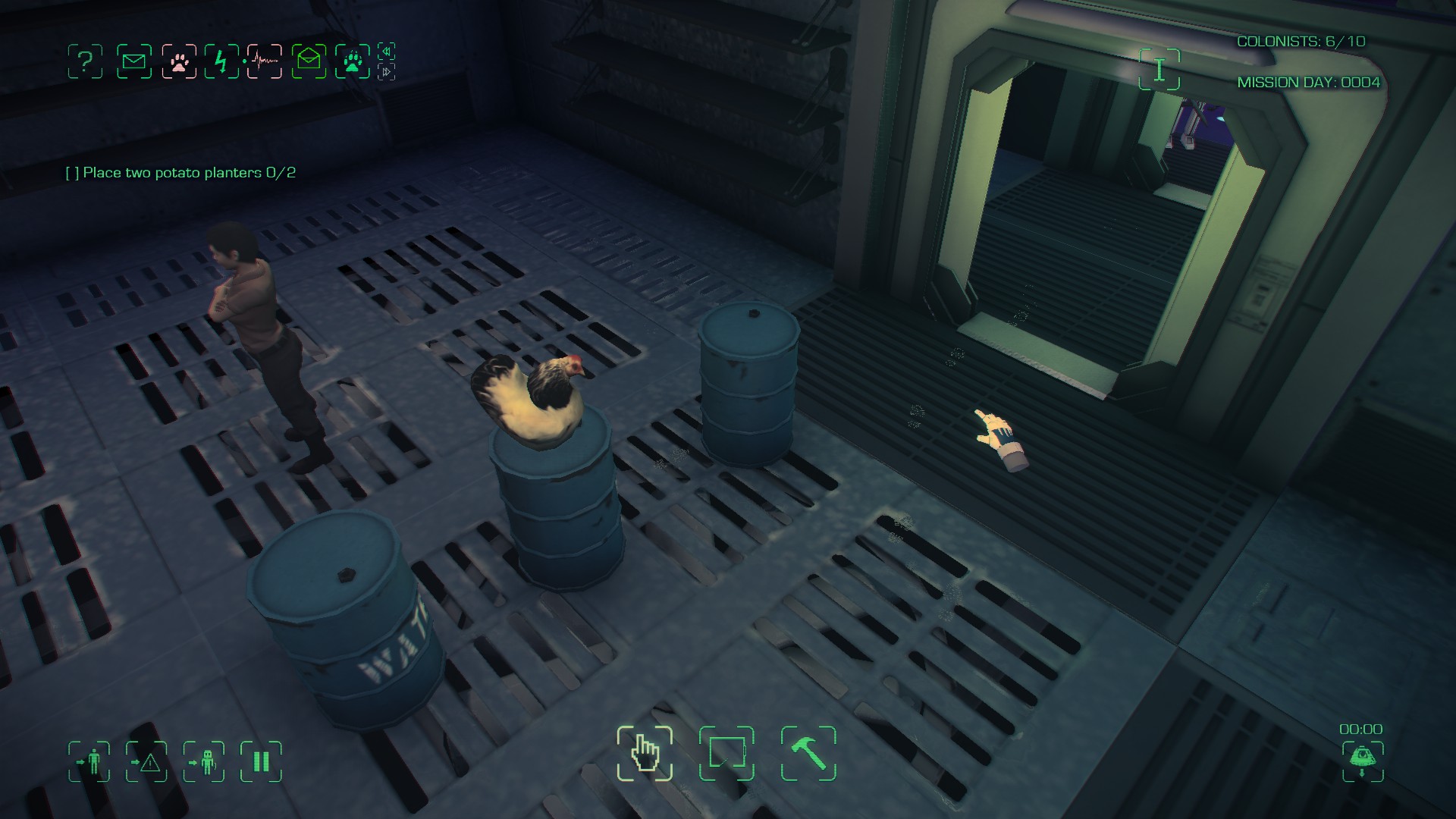 At its heart, Maia’s a Dungeon Keeper-esque god game with one simple objective: create colonies on the eponymous planet and research its geological, environmental, and biological characteristics. Most missions involve gathering a bunch of data through research once you’ve created a stable, habitable colony filled with happy, busy colonists.

Colonists are a bundle of stats and will promptly send you needy emails when something isn’t to their liking. These are mostly banal requests to make more beds, build more planters, turn up the heating, or turn off those pesky low oxygen emergency alarms that ‘are harmful to morale.’

Managing colonist temperature, oxygen levels, food supply, and overall health is a big part of Maia, but it’s a tedious process thanks to their often baffling AI. A potato planter caught fire in my hydroponics room but Mr Colonist was all about the carrots and decided not to make a fuss about the whole thing. 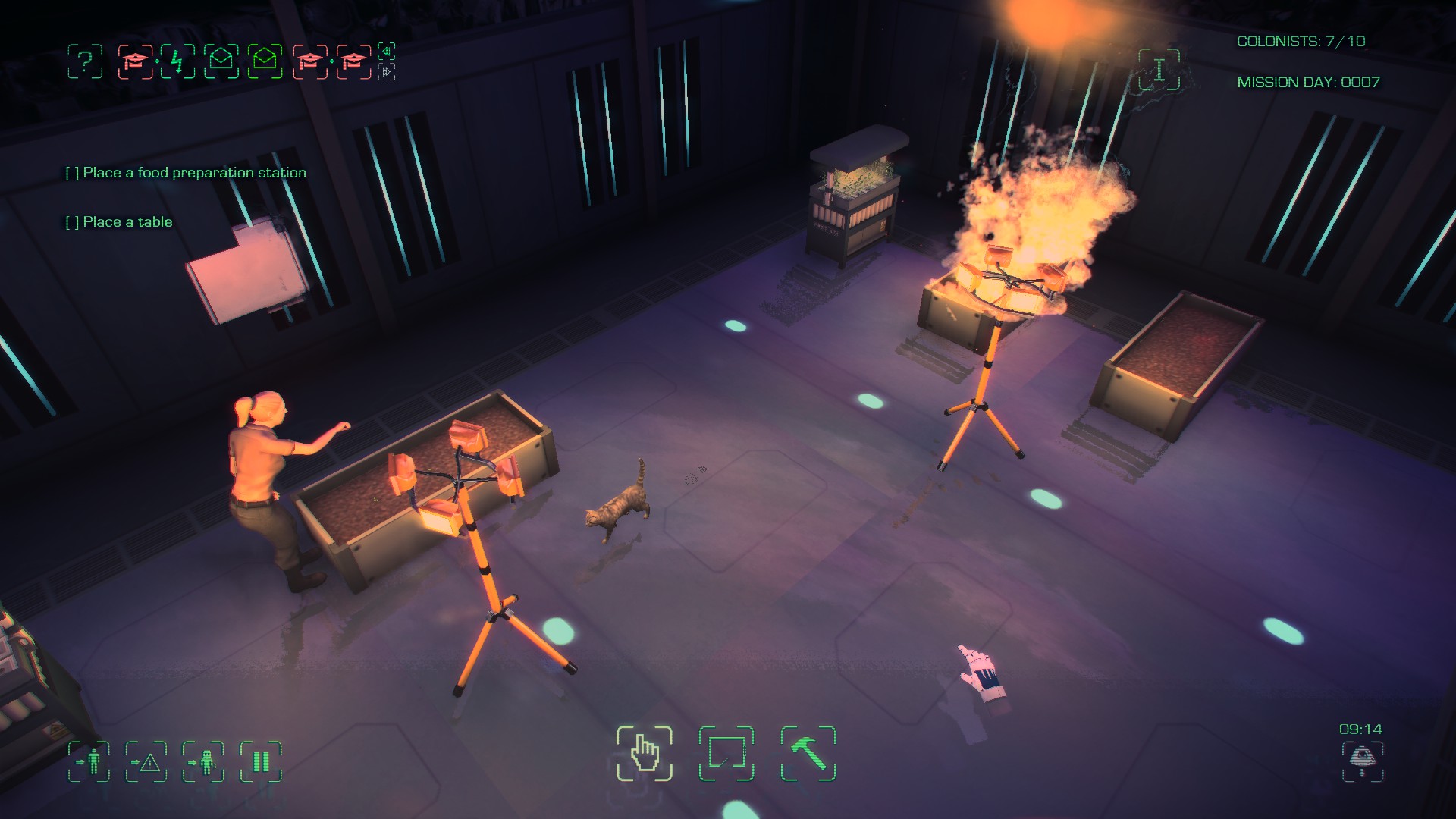 I failed a few times when my colonists shivered in the corner instead of building the heaters I’d set for construction, or starved when there was a stock of rations one room over. A little more colonist control would be much appreciated here – perhaps the ability to drop them in the right room to give them a head start.

Colonies aren’t just filled with humans; controllable IMP robots serve as your heavy lifters, and pet cats, dogs and chickens keep morale high. You can control your IMPs in first person, but make sure you know where the hell you’re going because there’s absolutely no map to guide you.

This is one of the many UI choices that baffled me. Native fauna approaches when colony activity increases, but without panning aimlessly around the screen there’s no way of quickly telling how far away they are. Most text is also attached to your cursor, meaning extra maneuvering is sometimes needed to see what could have been relegated to a window on the side. 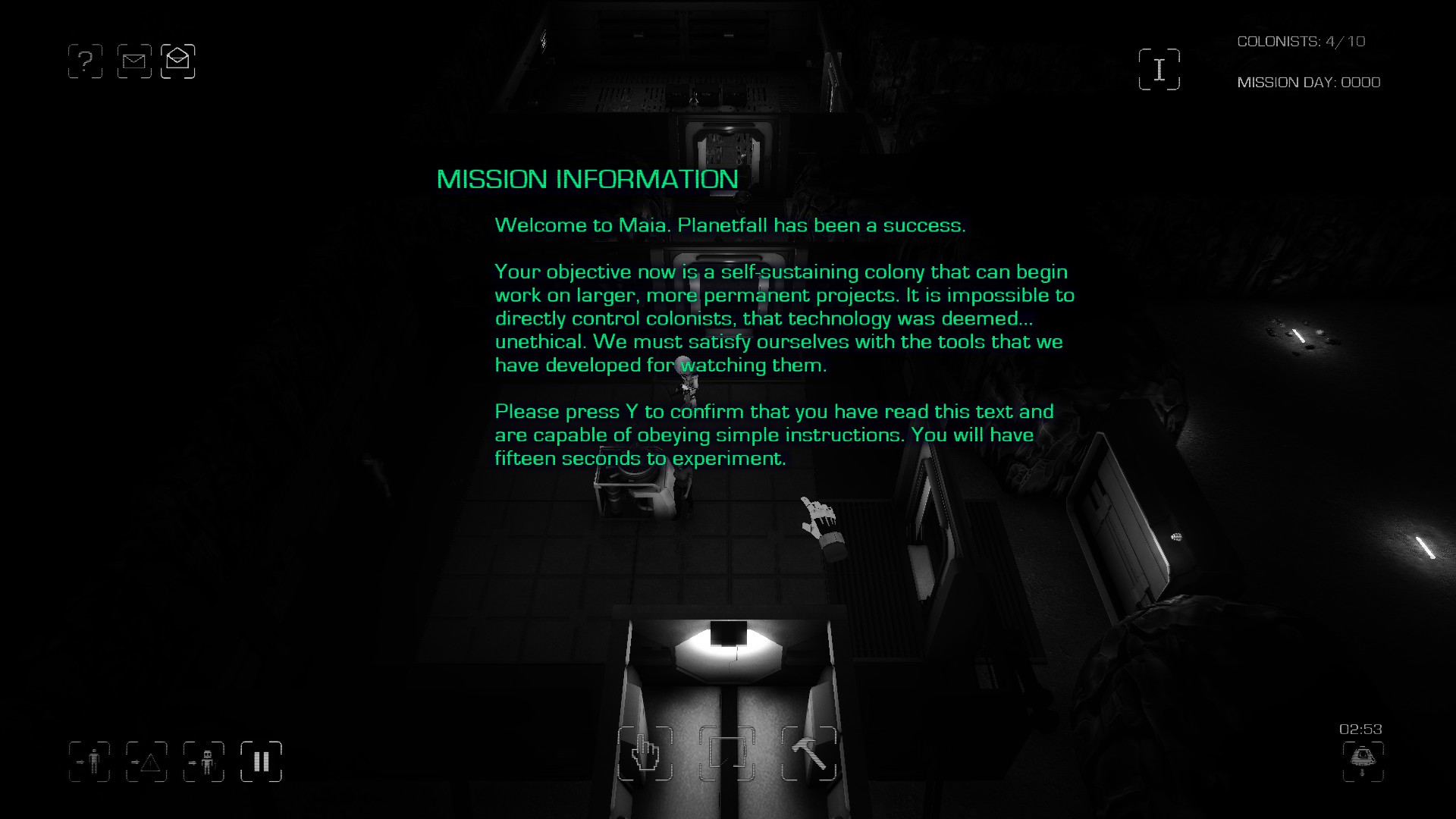 For a sim so heavily focused on micro-managing a colony, I would have expected more data available in a broad, approachable format. Most information comes solely from individual mouse hovering, meaning there’s a lot of busywork mousing over colonists, rooms, and objects just to get information that could have been more appropriately organised.

There’s a sandbox mode, a set campaign, and some standalone missions to test your survival skills. The tutorial is speckled with quality gags but is abysmal at teaching you how the game works. Once you do manage to grasp the basics of ‘not letting your colonists die by building a room and forgetting to place a door for them to get out,’ the campaign does serve as a great way to test your skills.

Don’t get me wrong, I still think Maia’s creation is a monumental effort. Not only is the game packed with more details and jokes than whole teams can brainstorm, but the engine was specially created just for this vision. 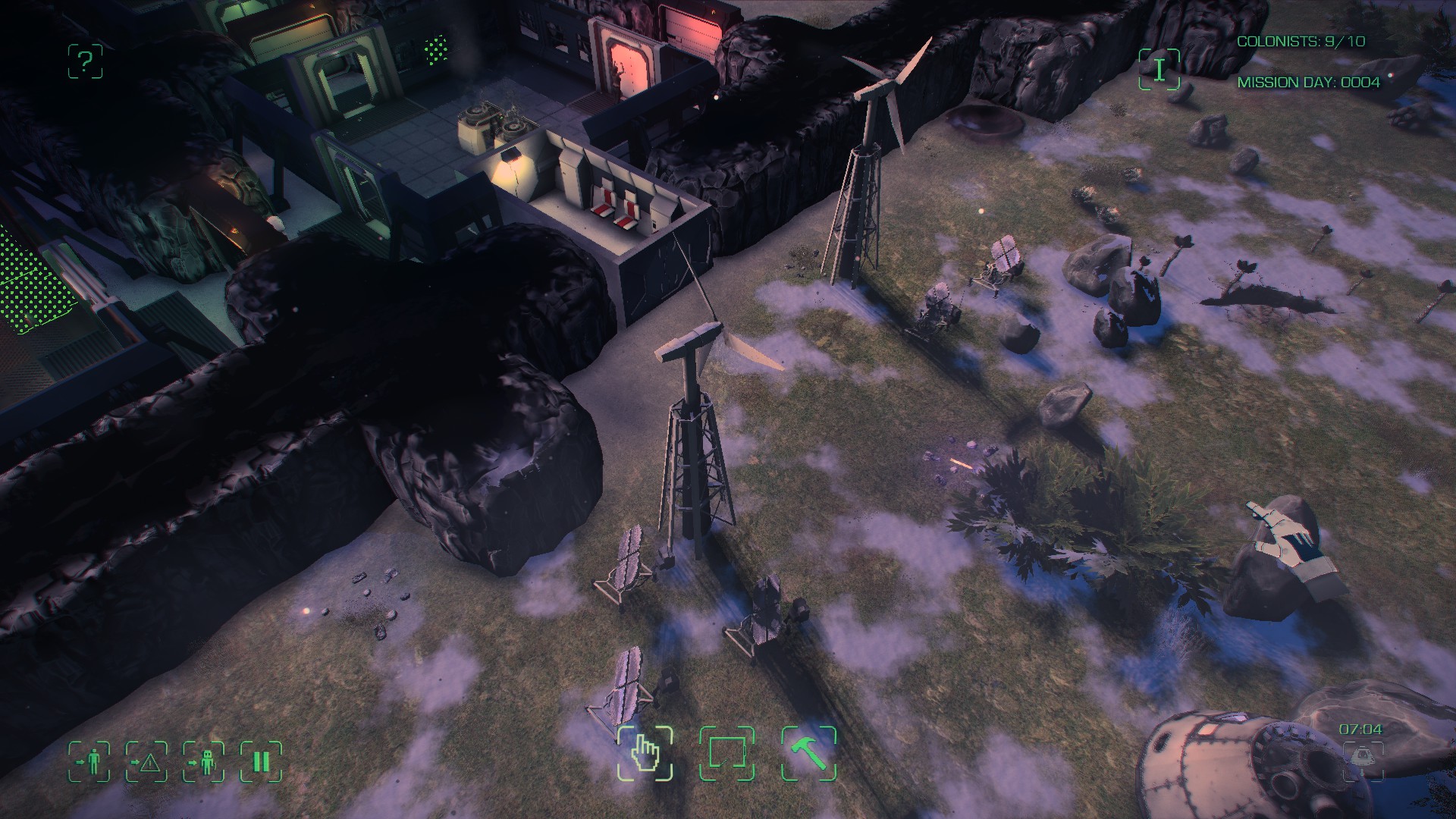 There are perks and quirks to this. The ability to have thousands of tiny lights from glow sticks, floor lights, and lamps is great. Having colonists trail muddy footsteps through your freshly constructed workshop is delightful. But, performance issues and crashes still plague the engine and distract from the most enjoyable moments.

The game can randomly crash to the main menu without warning, and frame rates drop significantly when zoomed in, or when panning the camera outside your base. It’s seriously frustrating, but hopefully fixable. When I did get smooth performance the engine held up nicely; it just needs some more tinkering.

I don’t think I’ve had this many chuckles in a god game before Maia, but on the flip side, I’ve never felt less like a god in one. During my time playing, I appreciated the finer details added by a clearly passionate developer but suffered through too many bugs and frustrations to properly enjoy them.