Sometimes too many ingredients still end up tasting good. 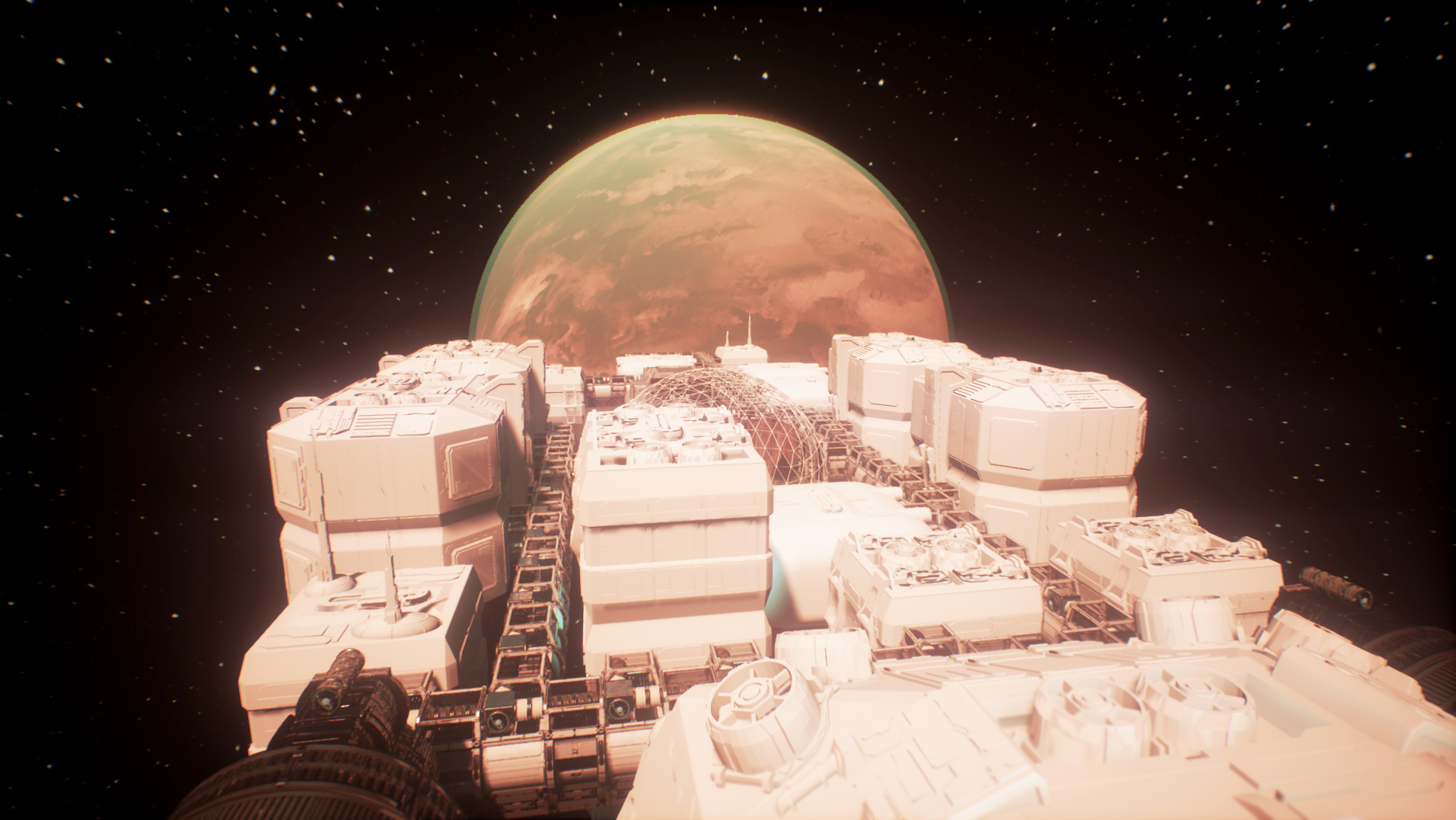 I step off my harvester and into my space station after a successful resource gathering mission in a quadrant’s planet tagged “Danger Level: High”. I found some much-needed aluminium and plants to add to my biosphere. I’m on my way to the clone lab in order to start producing humanoids that can breathe in my Genesis candidate planet’s atmosphere. Suddenly, the speakers aboard USS Potato scream: “Warning: Life Form Detected!”

How could this have happened? I’ve been more than careful. I’ve supervised everything that came onboard through my tractor beam. There’s no way an uninvited guest found its way into my station. Maybe this quadrant’s high danger level has something to do with it. I run from the hangar towards the heavy guarded beam, a pivotal part of my ship and with close connections to the bridge. I hear gunshots near the greenhouse lift and find myself in the middle of a warzone, systems failing, everything going to hell.

I enter the bridge, take down some hostile soldiers and use the navigation system to hyperjump one quadrant at a time as far away as I can. Each jump blurs my vision and I can hear my crew getting decimated around me. After around ten jumps I’m pretty confident we’ve lost them. I clean up the place with my heavy machine gun. 80% of my crew is dead, but the ship survives. I can create more clones and still reach Genesis. 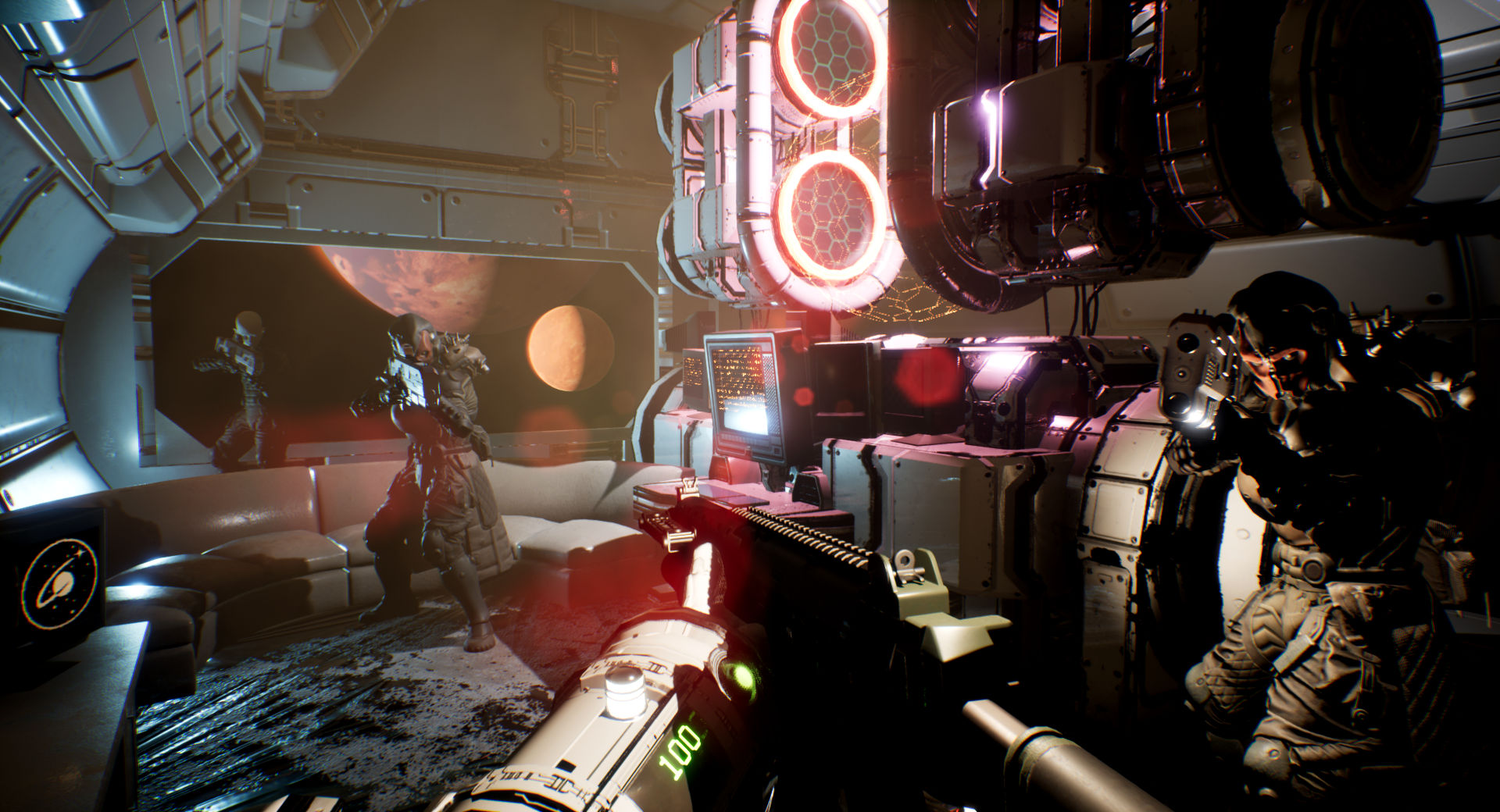 Genesis Alpha One is many things: a space station building simulator, resource management and space travel survival, farming and crafting sim, a rogue-like journey towards humanity’s salvation and a first-person shooter. I have to confess that when I jumped into the tutorial I thought it was going to be a mess. Too many elements to combine and make coexist together in harmony. Too ambitious.

But after 20-30 hours of gameplay, I’ve changed my mind. Genesis Alpha One, a triple-I game developed by Radiation Blue and published by Team 17, manages to blend all of these genres into an engaging game.

The mission is to find a replacement for Earth through the galaxy. But finding it is just the first step. Actually being able to settle in that planet and start what’s called a Genesis will require creating a certain amount of clones that will survive in said planet’s atmosphere. You’ll start off with a small crew and a couple of basic nodes in your ship: a tractor beam to collect resources from space trash, a harvester to land on different planets and get both raw materials and plants to include in the greenhouses, a cloning lab to splice some human and alien genes and fabricate the perfect clones for your mission, and crew quarters for these to live.

You play in a first-person perspective of the ship’s captain, although if you die you’ll respawn as one of your crewmates, who’ll succeed them. As in every true rogue-like, these deaths are permanent. If you run out of crew members or your ship is destroyed, game over and start again.

Whether it’s beaming in materials from space, landing on a planet, cloning a new member of staff, refining resources or scanning planets and debris, every process can be sped up by holding a button in front of a terminal or just supervised by assigning someone for the job. The interfaces and overall aesthetic look borrowed from Alien: Isolation, meaning 80’s looking sci-fi computers with clunky keyboards and background music that could’ve easily come from Blade Runner or 2001: A Space Odyssey. 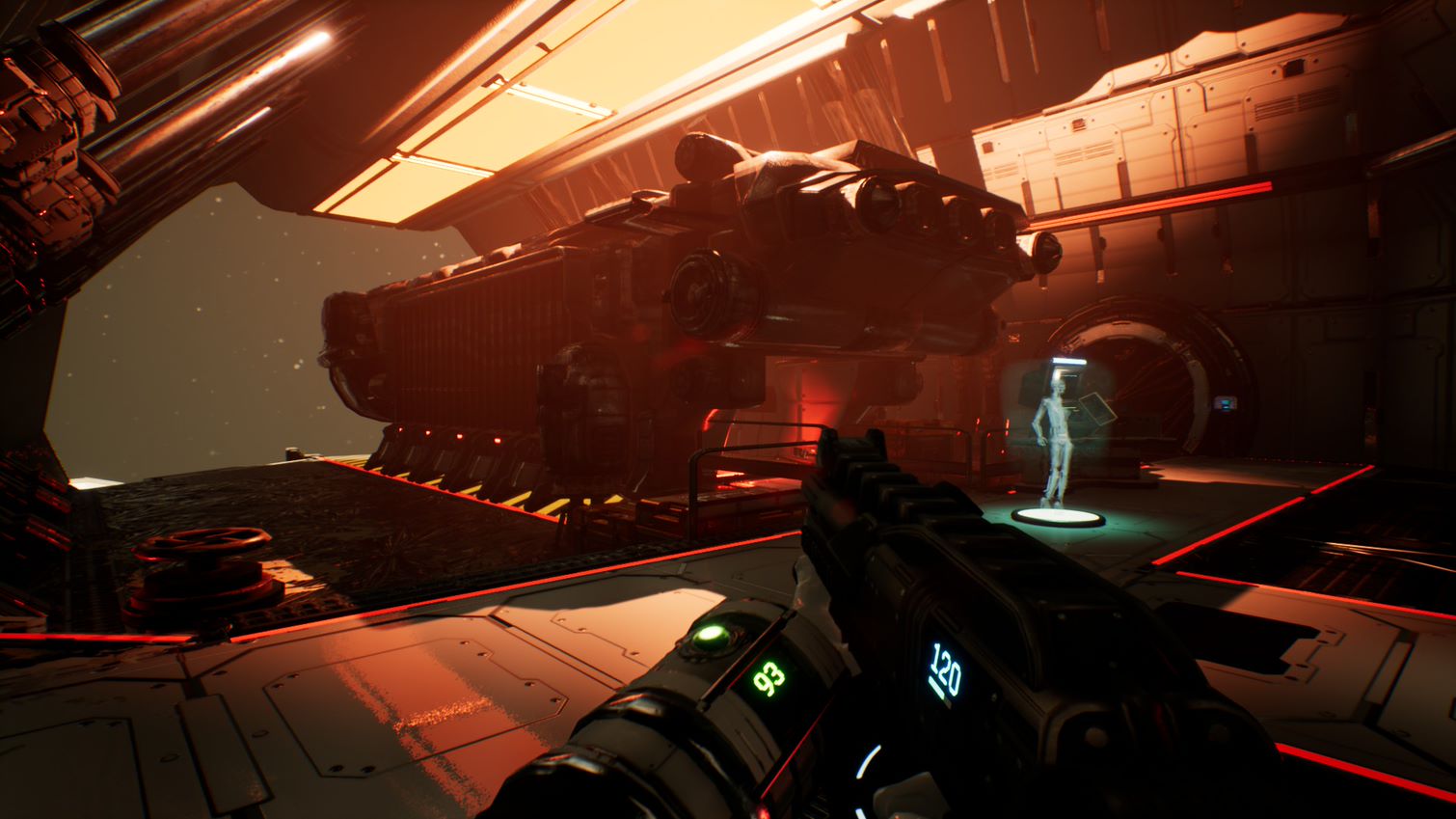 Disappointingly, every planet you land on looks pretty similar to the previous one and you don’t have the freedom to completely explore them – rather, there’s a limited circular area in which you’re guarded by the harvester’s life systems and artillery. Every time you start harvesting or find a site to scan for recordings, new guns or improvements to your gear, you know you’ll hear the “Life Form Detected” warning and some sort of bug or humanoid alien will try to kill you. This strips the game of any kind of surprise element and freshness because, simply put, you know you’ll be attacked every single time by some sort of enemy designed with lack of inspiration. Luckily there are many different life forms to be discovered, even if it takes a bit of time.

Leaving your crew to beam resources from open space is also a great way of knowing you’ll die. Every time something is brought in, there’s a good chance that some alien will show up and your crew will respond with gunfire, as well as your automatic turrets. But just one bug kept alive will start a hive process from which no one will come out alive. After a while, these bugs will infest the ship and start destroying it bit by bit until it’s down to rubble.

Constantly cleaning up alien nests through your ship’s service tunnels (which seem to be there just to be infested) is not fun at all and I personally ended up overseeing every beaming process and making sure every single bug was destroyed before moving on and never leaving my crew alone with it. This really slows down the game, but I found out the hard way that it was much safer. 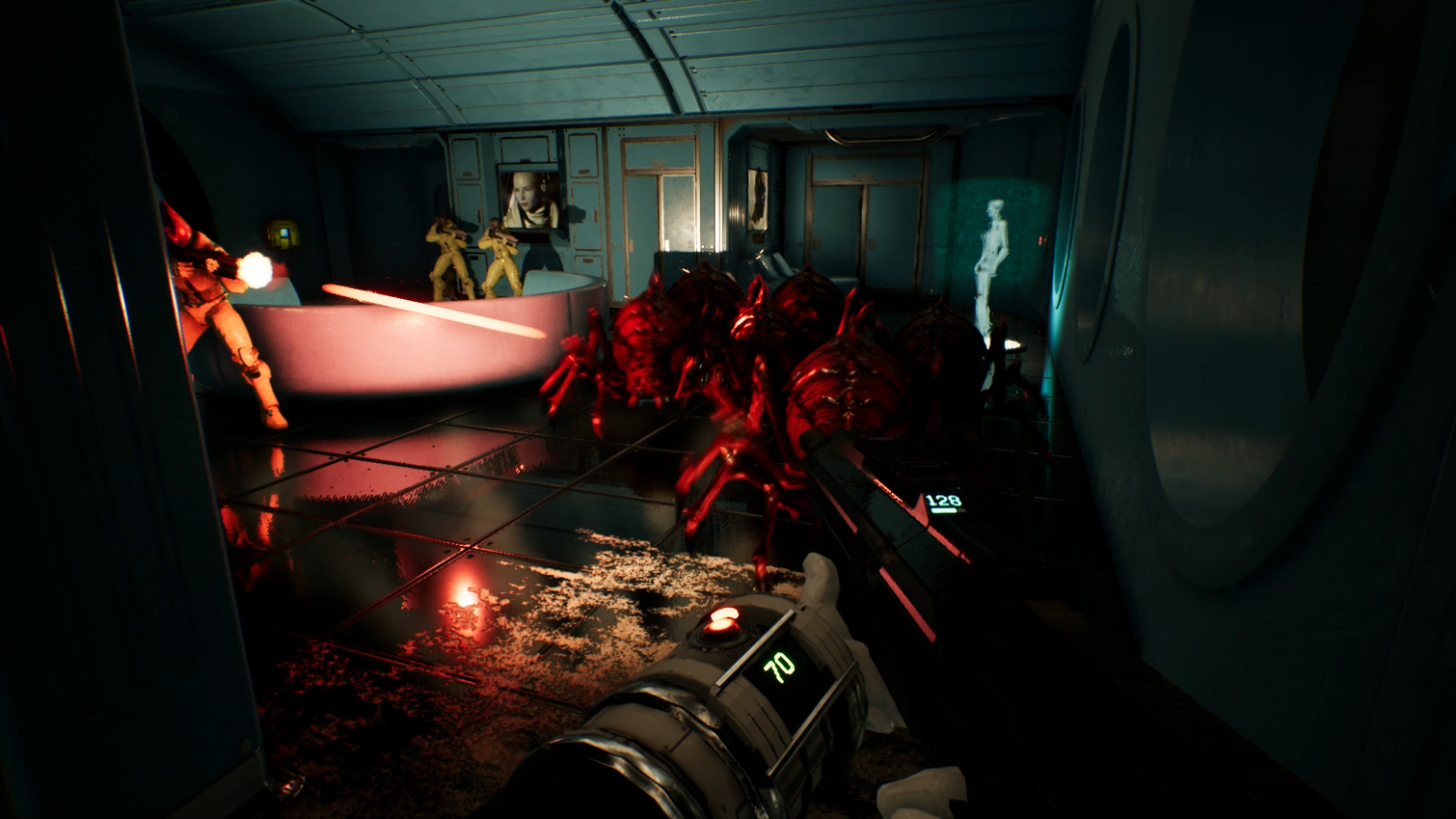 But once your ship is properly defended and you know what you’re looking for and where to look for it, things start running much more smoothly. A good amount of well-placed turrets and decontaminating corridors will prevent alien life forms from escaping and burrowing somewhere. Stronger and more powerful and intelligent enemies will appear eventually, but hopefully by then you’ll have a large enough, well-defended crew capable of taking care of them, allowing you to concentrate on meeting the requirements to start a Genesis and save humanity.

On a side note, the shooting mechanics are pretty basic. There’s no aiming down the sights or alternate fire modes – just a DPS number and a decent amount of options to choose from.

Gathering recordings from Tom’s Voyage around the galaxy, encountering increasingly more challenging aliens, gathering their DNA to replicate their abilities within your crew of clones and sweeping the whole map for every weapon, resource and Genesis candidate planet out there are all optional challenges you may or may not want to face. In my run I found a planet suited for settlement that had an O2-based atmosphere and avoided any high danger area until I had the number of crew members required and finally started my Genesis. But every run is different, and every player will be looking for a different experience. Genesis Alpha One clearly nails that aspect.

In conclusion, Genesis Alpha One is an ambitious triple-I game that, even though it relies too much on continuously repetitive and similar-looking activities, provides a deep, engaging and challenging experience thanks to its great visuals, some surprises along the way and gameplay mechanics that quickly become natural and intuitive.