Get caught in the Web. 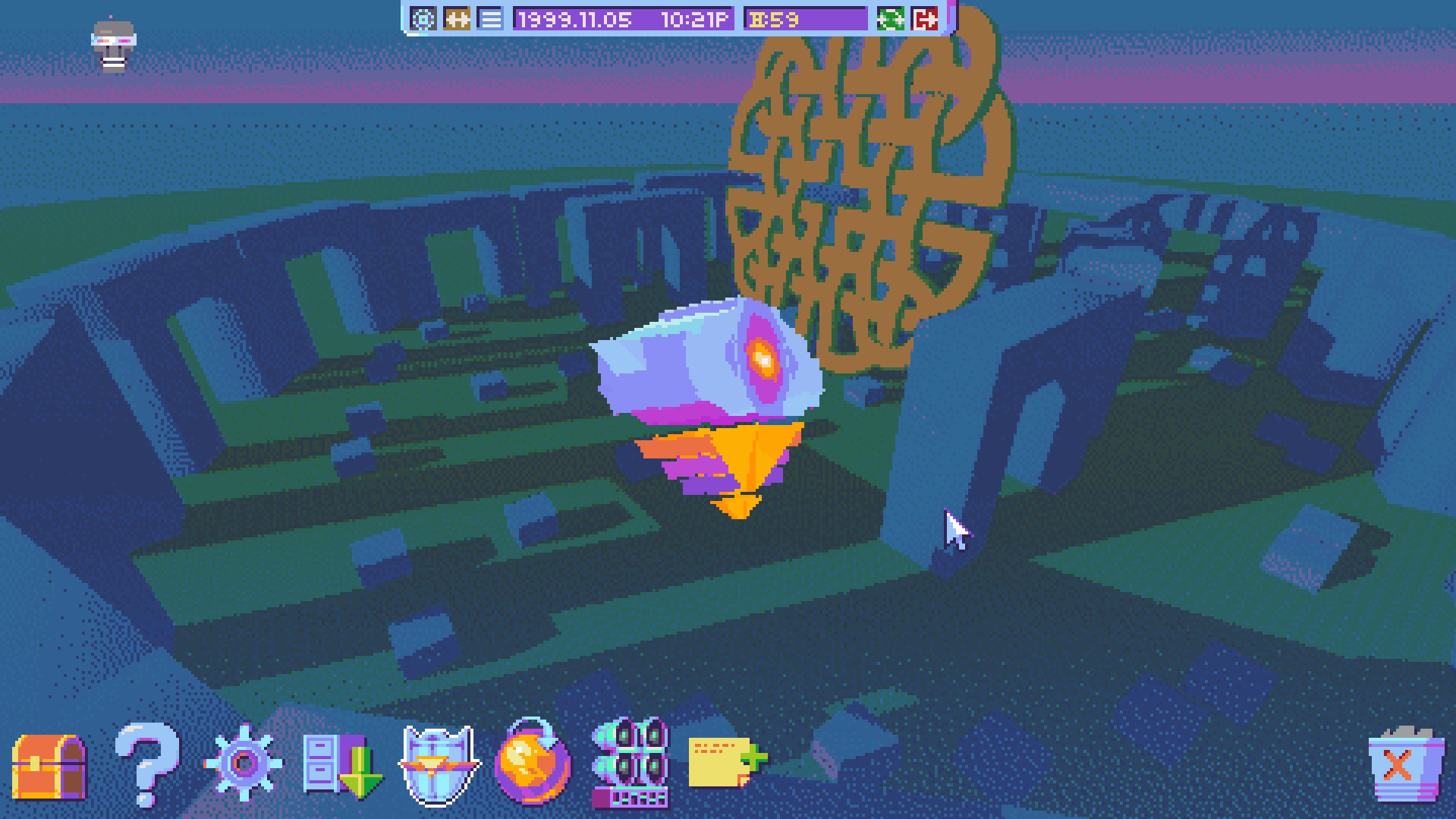 The internet’s stranglehold on our society is irrefutable. Its influence reaches far and wide, from how we spend our free time to the jobs we have, the political parties we vote for and even the people we date. Of course, it wasn’t always this way. Hypnospace Outlaw returns to a simpler, more primitive time of the ‘net – albeit set in an alternate dimension. Though not the most mechanically sound experience as a video game, as a simulation it’s a wondrous, hilarious nostalgia trip.

It’s 1999 and the early days of the internet are in full swing. Not quite as you know them, mind – Hypnospace, as the name alludes, is a network accessed primarily as you sleep, through a special headset. It’s a community akin to Geocities, and as any reader of YouTube comments knows, an online community needs moderation else it devolves into a wretched cesspool. That’s where you come in, Enforcer: scour the e-world in search of copyright violations, harassment and illegal activity, then swiftly employ your banhammer. 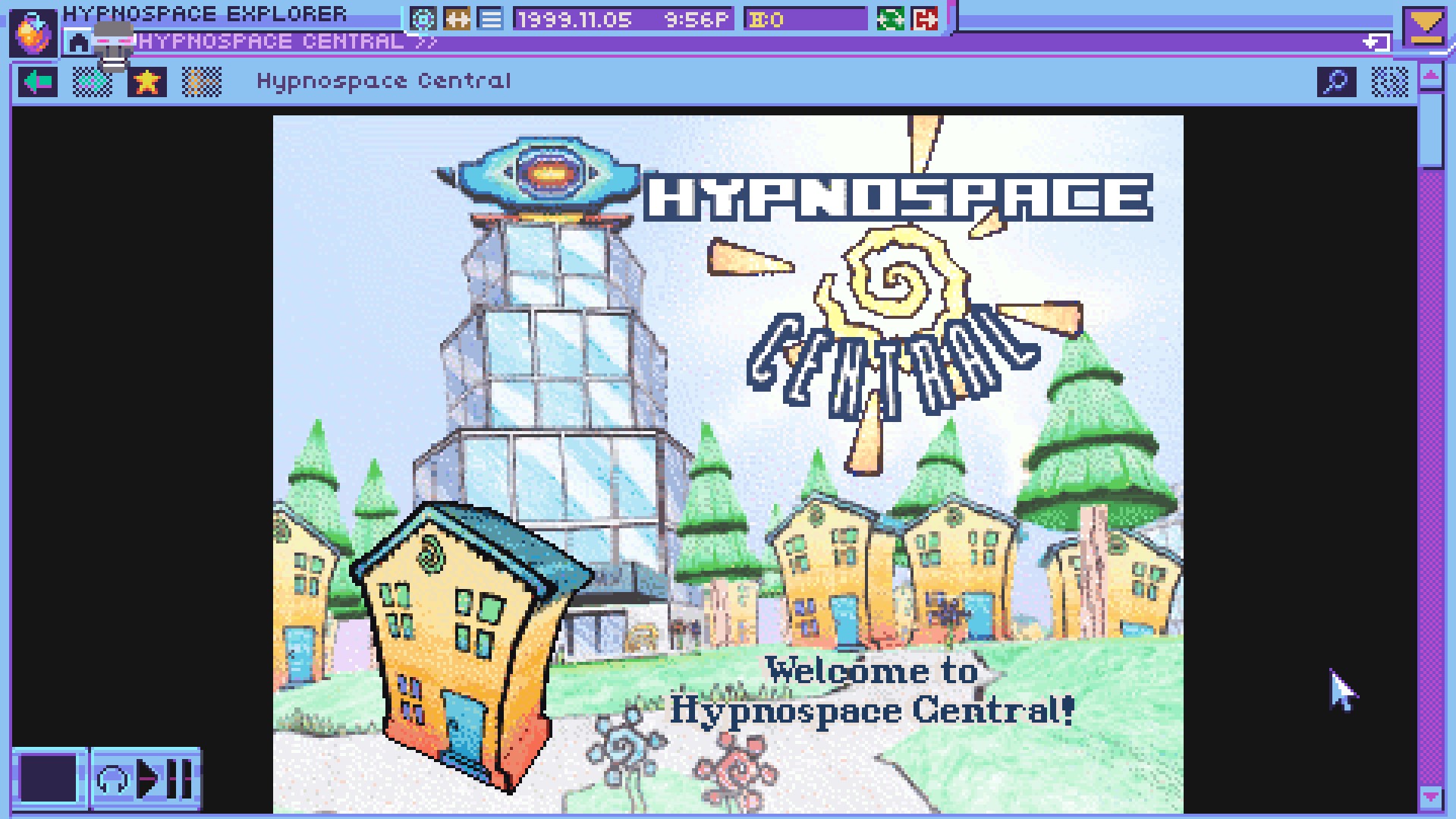 It’s a conceit that provides a basic player agency, but make no mistake: Hypnospace Outlaw is primarily about discovery. Being an Enforcer is a mere excuse to delve into the online world and discover the weird and wonderful things within. Mad conspiracy theories. Underground music genres for people with questionable taste. Riddles surrounding the deployment of viruses. You never know what you’ll discover when you visit a new webpage. The novelty is exhilarating.

Of course, it’s hard to take any of this too seriously, and Hypnospace Outlaw jabs its tongue so firmly in its cheek it’s a wonder it doesn’t poke out the other side. I’d hate to spoil anything for you by going into specifics, but some of the content is outright hilarious. No one is safe from lampooning, from schoolchildren in their awkward teen years to middle-aged god-fearing adults or the elderly in care homes. Anyone who’s grown up using the internet will be able to relate, whether it’s cringing at a kid’s embarrassing website reminiscent of one they made in their youth or recalling that hapless relative with a complete lack of self-awareness regarding their online presence. 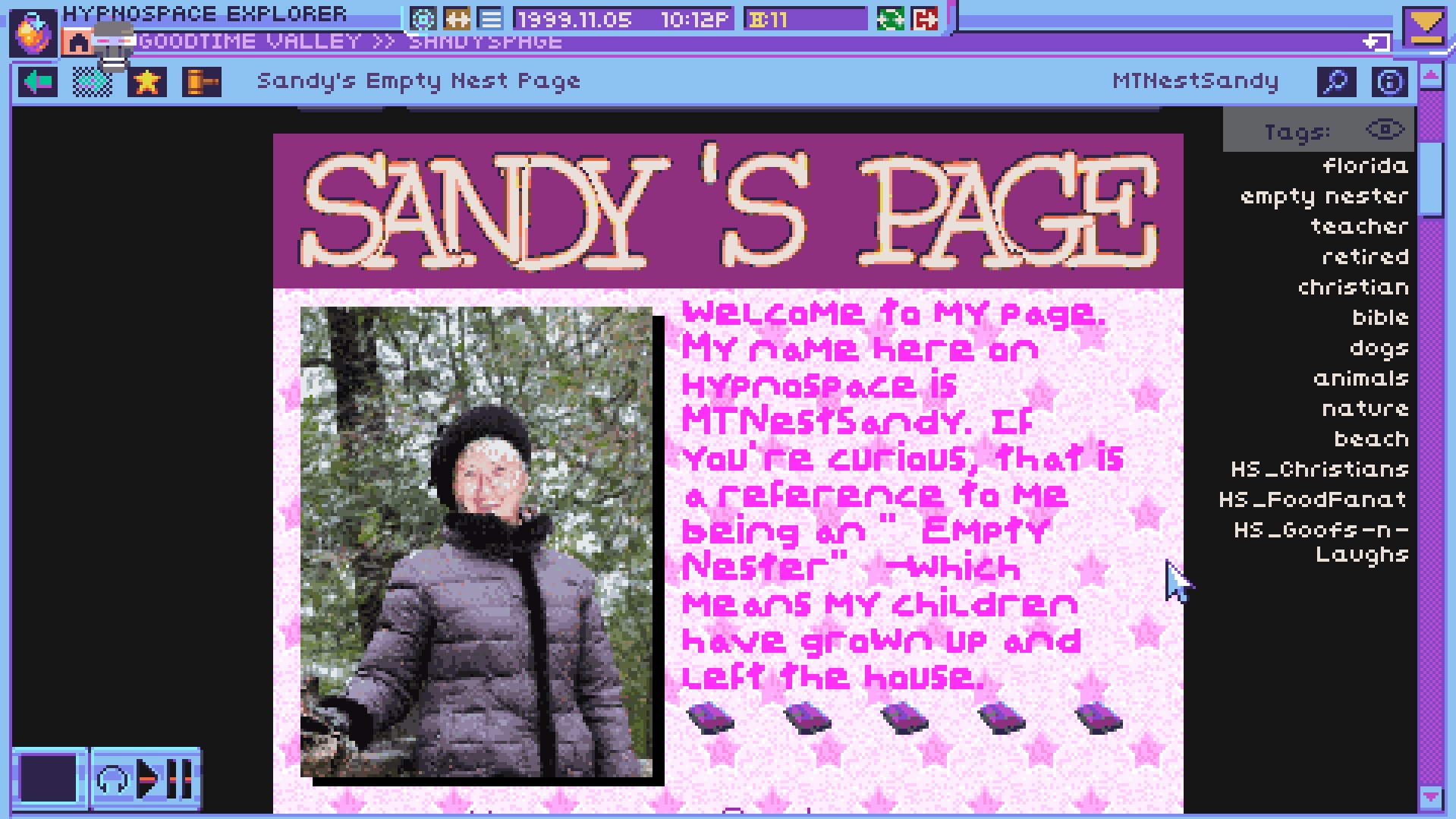 To best evoke these memories Hypnospace needed to simulate the old web, and this is where it absolutely excels. The attention to detail is amazing. Virtual pets and ‘assistants,’ some of which include adware. Crude website builder templates in offensive colour palettes. Compressed animated GIFs and emoticons. Harassment from pop-ups, garish banners and viruses. It’s all just as bad as you remember it.

It’s important to note that exploring this archaic online world demands a lot of reading. Many of the jokes are uncovered through webpage text, along with clues of the cases you’re trying to solve. This isn’t the only media available for consumption, however – there are cheesy low-res videos and a surprisingly extensive trove of music you can play on your music player, from tinny MIDI tunes to eclectic full-length songs. 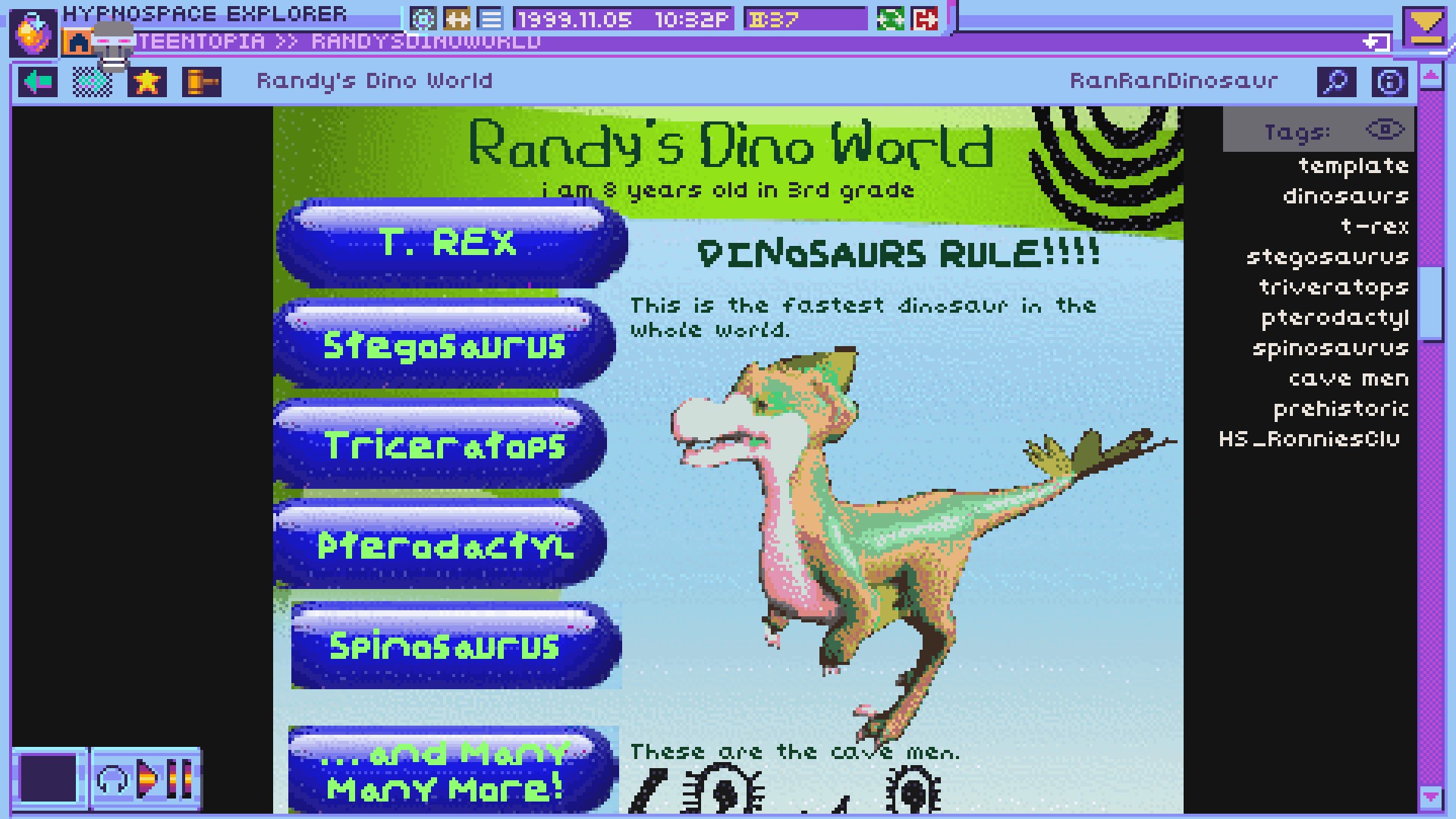 Whereas it’s enjoyable to simply seek out all of this content, the concept of being an Enforcer doesn’t hold it all together as well as it could have. The role doesn’t feel fully fleshed out, with only a handful of cases available across the entire game. Sometimes it can get in the way, too, causing frustration when you’re stuck on a case and unsure of where to find what you’re looking for.

As you progress, new sections of Hypnospace open up. But along with scouring those, you’ll often be required to revisit previous websites. This reliance on backtracking can offer funny new insights into the lives and personalities of these online personas, their micro-dramas unfolding for all to see. On the other hand, sometimes you’ll just uncover the same stuff over and over. 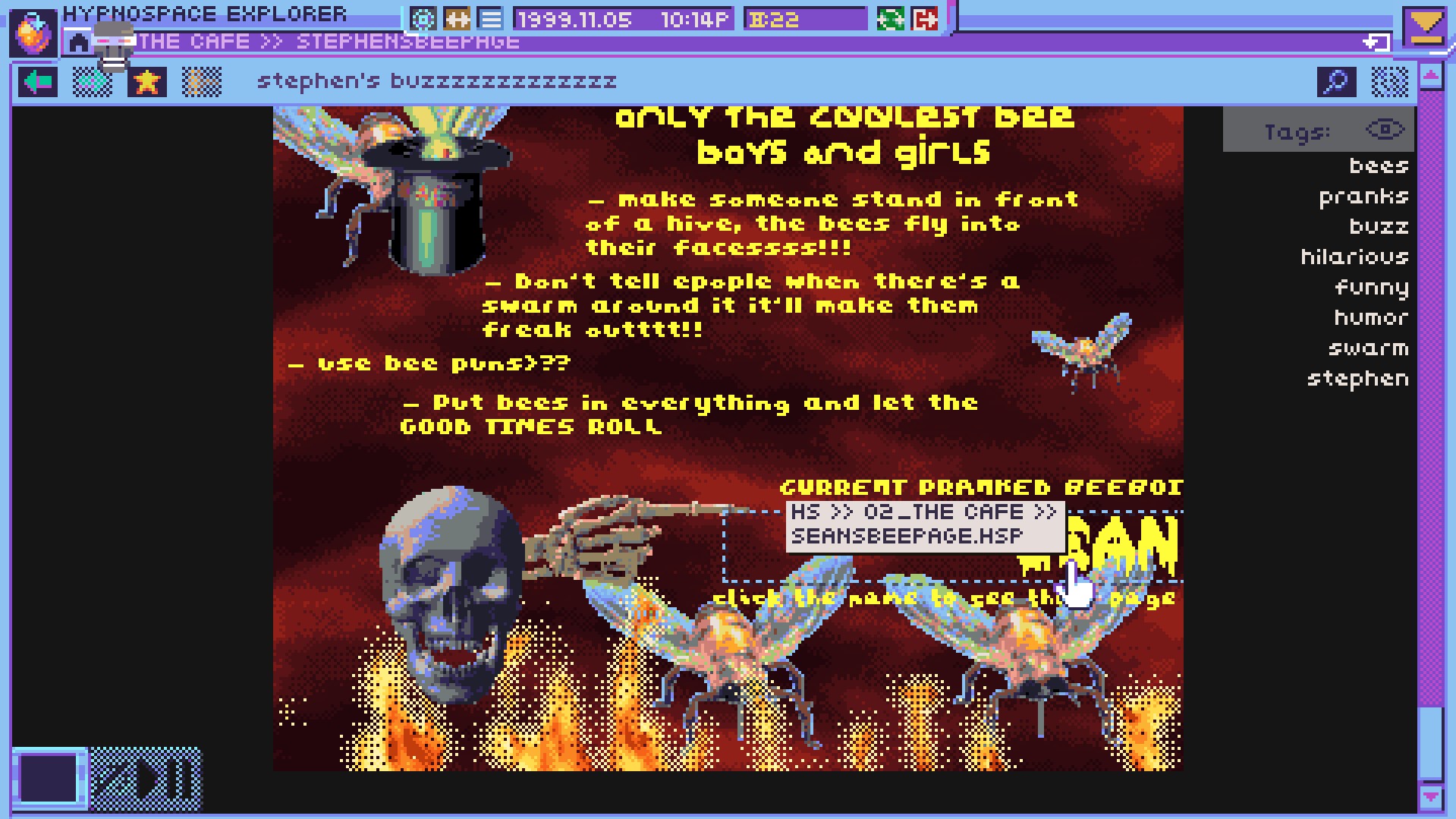 Hypnospace Outlaw’s imitation of technology from days of yore is commendable, along with capturing the fallible, human ways we interacted with it. Although it may not be the most well-structured experience and is guilty of running its own well of novelty dry, it offers a mostly delightful few hours of misty-eyed laughs and surprises.

There Is No Game Hates Me And I Love It

Get Remnant: From The Ashes While It’s Free