Seatbelts at the ready.

Seatbelts at the ready. 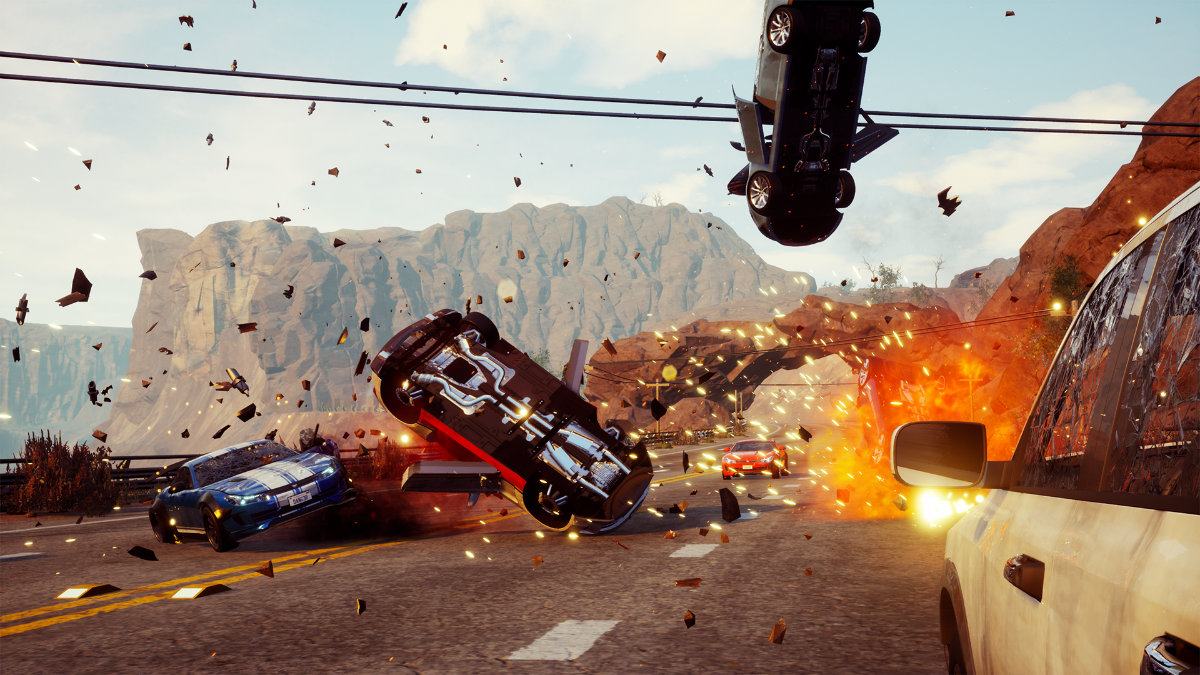 In a disappointing turn of events, modern racing games have opted to head down the highbrow, menu-obsessive path of simulation. Arcade-racing games have somewhat become antiquated, reserved for the Mario Karts of the world. Dangerous Driving – the newest from Dangerous Golf and Danger Zone developer Three Fields Entertainment – is a step away from this recent trend.

Posited as a spiritual successor to the Burnout series, Dangerous Driving offers a rewarding sense of immediacy and velocity. This game is here for times when all you want to do is sit back and wreck some fools. Sometimes, you want to step away from the rigor and technical noodling of sim-racers and drive the way you wish you could at 5pm on a Friday: fast, carefree, and drift-heavy. 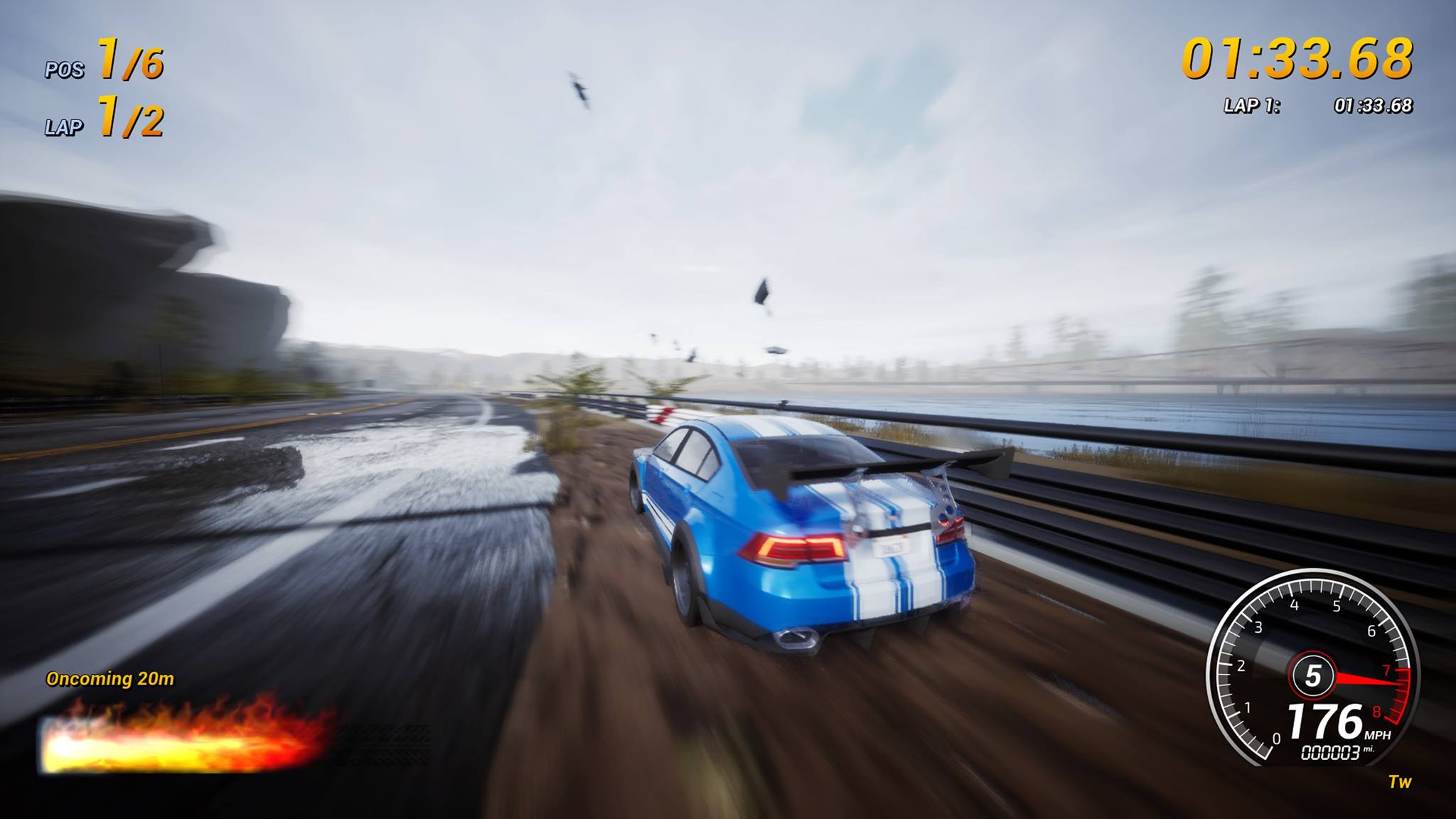 On start-up, it becomes immediately apparent that Dangerous Driving isn’t setting out to be a complicated game. The menus are punchy, shepherding you into a race as soon as possible. Everything about the title screams fast, from the menus to the design of the tracks and the cars themselves.

There’s a colorful selection of modes, too, offering something for everyone. There are, of course, classic Race and GP options, some with destruction and some without. But in addition to these are modes like Pursuit, in which you play as the cops and take down each racer; Road Rage, a score-based race where takedowns count as points; and Shakedown, a frantic one-lap challenge. These modes are certainly the standout due to the carnage that ensues, whereas the others slightly disappoint in terms of road-rage entertainment and are a little on the easy side. 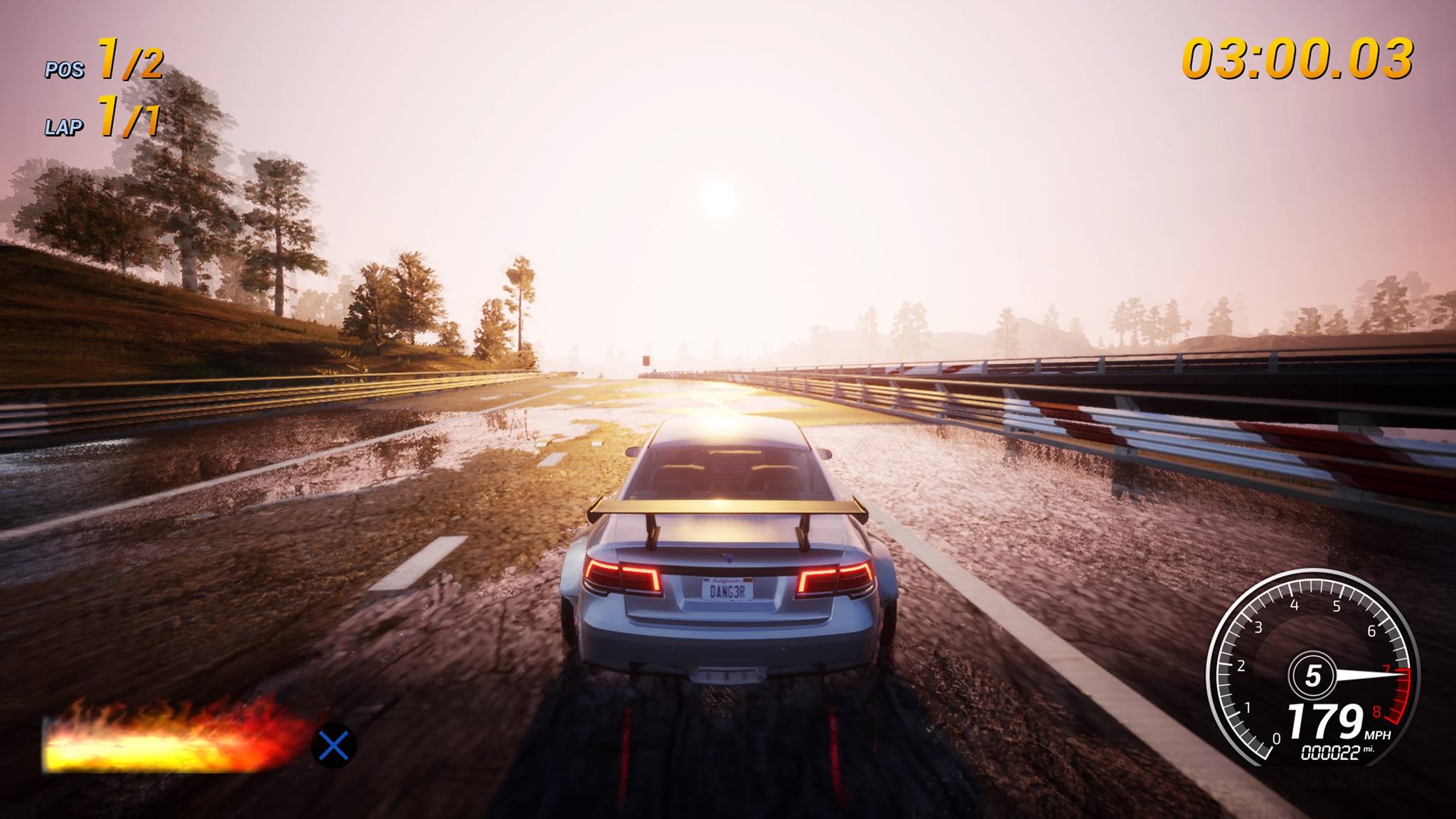 While each track and stage has its own unique aesthetic and weather, the tracks can feel oddly monotonous. On paper, the tracks are all varied, but during play, they all sort of blur into one. Dangerous Driving has a simple yet addictive control scheme and gameplay loop, but not enough explicit variation in the tracks to keep players on their toes. Too often it feels like there’s no risk of losing the race, especially when the AI seems to be so tame in its default modes. Perhaps due to its forgiving mechanics, the tarmac variety is lost in translation. Thankfully, this should be remedied with its multiplayer component next month.

Outside of the Pursuit, Road Rage, and Shakedown modes, it would seem like I was the only maniac on the road causing trouble and crashes, while the computer-controlled contestants were out for a leisurely drift or two. The major issue with Dangerous Driving is that players always feel in control with the chaos that’s unfolding. Ideally, players should feel like a participant in any racetrack carnage as both perpetrators and victims as opposed to being the main causation alone. Players are rewarded for creating carnage by increasing their score and providing more nitro for use, but having the AI in on the fun could have improved its routine-like racing. 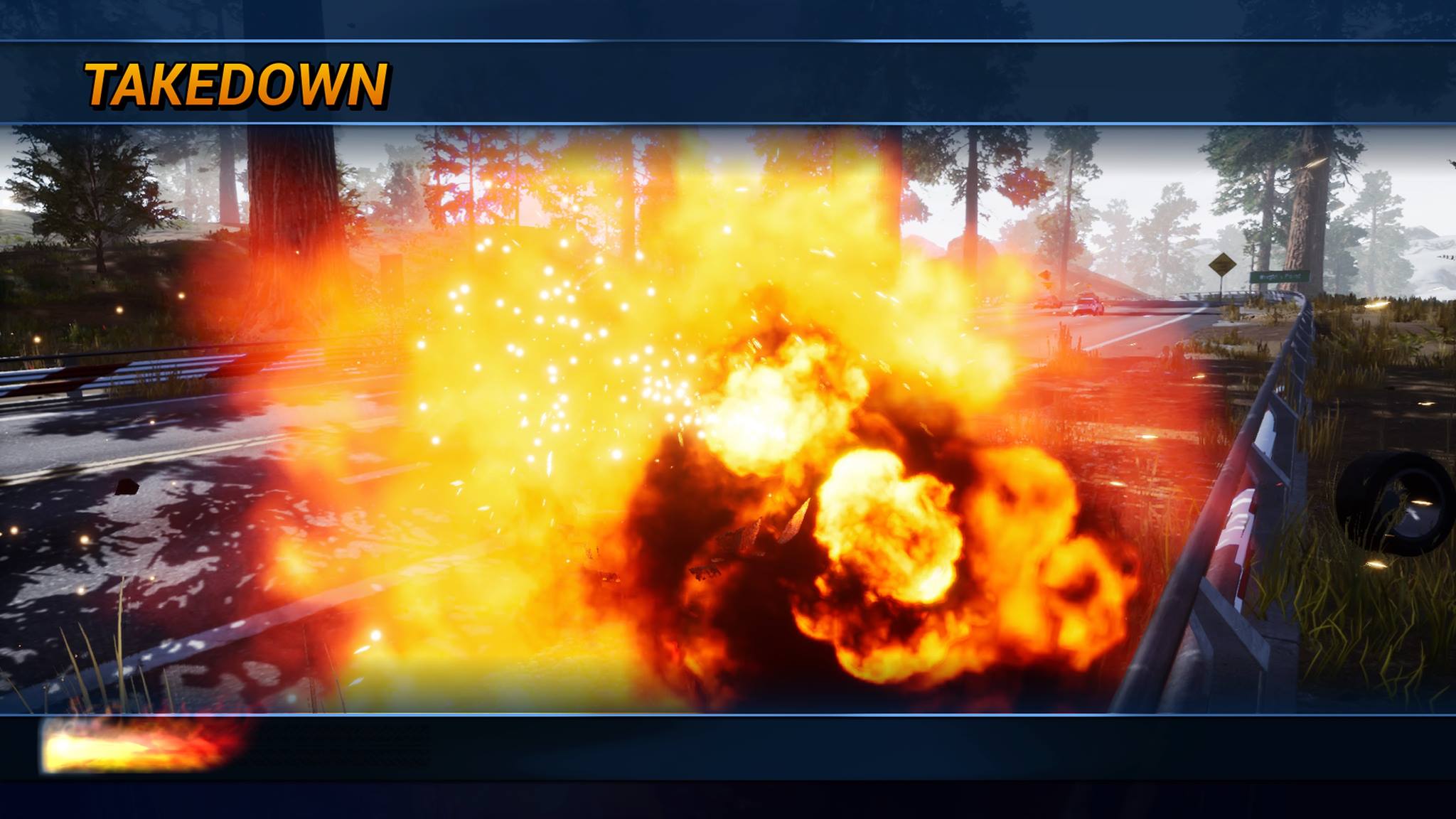 In terms of cars, there are six variants on offer, culminating in 27 vehicles overall. Within these variants are different types of cars offering simple bonuses and risk-reward play. Some are fast and nigh-on impossible to control, whereas others are easy to control but rely highly on nitro use. Three Fields Entertainment understands as an arcade racing game, there isn’t necessarily a need to entertain a litany of menus and specifications; players just want to know what does what and dive in.

AI struggles and the odd track monotony aside, Dangerous Driving still feels flat-out great to play. It is designed for jump-in play, but the integration of online leaderboards and the quick turnover of races means the desire for self-improvement develops quickly. The game has no story mode, instead committing unfalteringly to its arcade design. 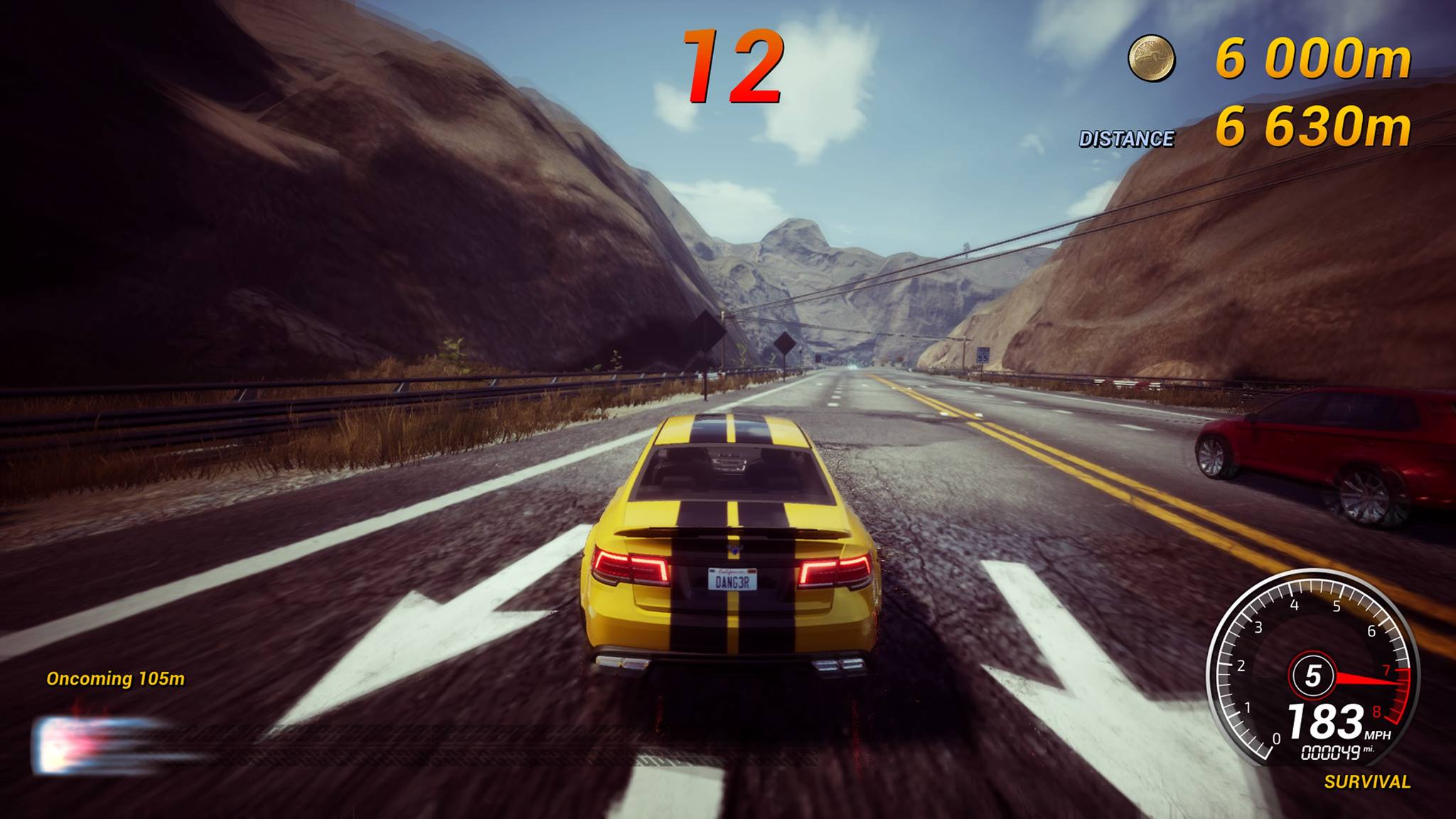 Jumping across different car classes and race types keeps things fresh, while the races themselves unfold at a frightening pace. The game has an oddly meditative effect, acting simultaneously as a way to blow off steam and warm up. For those looking for a racing game where they can jump in and out without needing a thesis in aerodynamics, then this has to be your next go-to.

Overall, Dangerous Driving is focused. The developer has set out to make a spiritual successor to the arcade games of the past and, to that end, it can be nothing but a resounding success. While there could have been more ambition and left-field, crazier tracks, there aren’t many qualms to be had with its simple design. Dangerous Driving is gaming fast food, but the good kind.