Whether it’s turn-based or real-time, strategy is good for the mind. Full control is hard to come by, but thanks to the strategy genre the power to command a million worlds is right at your fingertips. Every game’s universe abides by different rules and you better learn them fast, because we’re about to hit you with 50 of the best indie strategy games you can get your mits on! So pull up a commander’s chair or ruler’s throne, you’re about to take the controls. 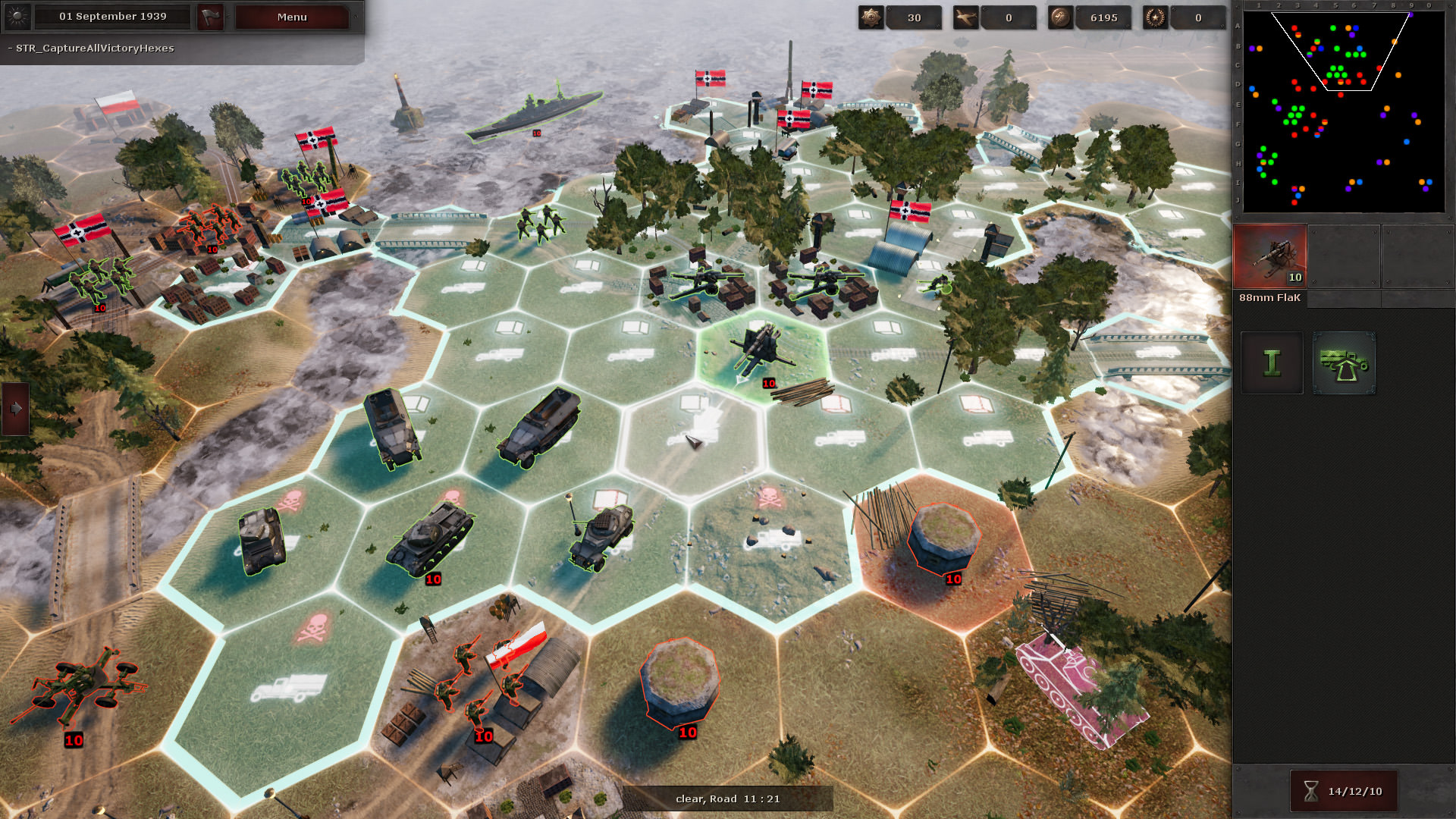 Panzer Strategy takes high octane battle-based warfare into the incredibly satisfying, albeit slower, realm of strategy. Develop your own unique tactics as you command your armies and weaponised vehicles through the battles of the second world war, forever altering history as you do so. The game world is based on one of intense historical accuracy. View some of the most infamous battles through the eyes of each side, developing each strategy over the course of political meetings with your country’s leaders all the way through to deployment on the battlefield.

Each unit has been developed to reflect the real life strengths and weaknesses of their equipment, so history buffs are sure to have the upper hand here. Never touched a history book in your life? That’s fine too, there’s plenty to learn about the machines that won, and lost, the second world war. What’s more, the result of each air, sea, or land battle will influence the next, and even side missions have bearing on the final historical outcome of your game. That outcome could be anything, as well, as Panzer Strategy’s non-linear narrative means every decision you make could turn the tide in battle. 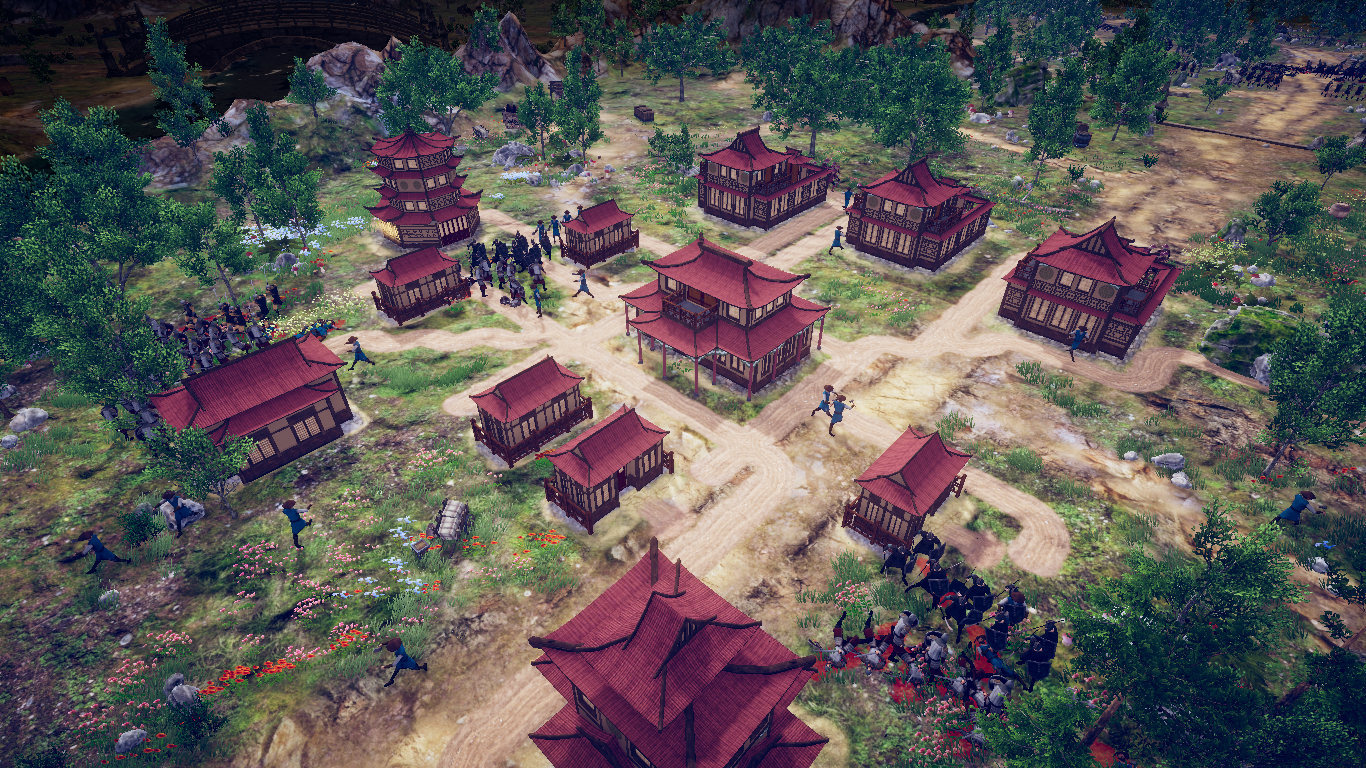 Once you get a taste of power, you’ll need a full meal to sustain you. Thankfully for medieval RTS fans, there’s far more than just a sliver of control in OneOceanLLC’s Taste of Power. The forces of Europe, China, and the Middle East have found themselves at a deadly impasse in what developers have touted as a Starcraft meets Total War alternative Middle Ages RTS.

Play as one of three factions each with their own unique skills abilities. Europeans can use gunpowder artillery and have their monks raise moral, meanwhile the Chinese have smoke grenades ready to befuddle their opponents and evade arrows. The Middle East is made up of the Timurids, warriors able to command chariots and underground tunnels beneath enemy lines alike. All the traditional mechanics of the RTS genre are in here, build your cities, manage your troops, and send forces out to conquer unknown lands; it’s not always pretty but it makes a satisfyingly complex strategy experience. 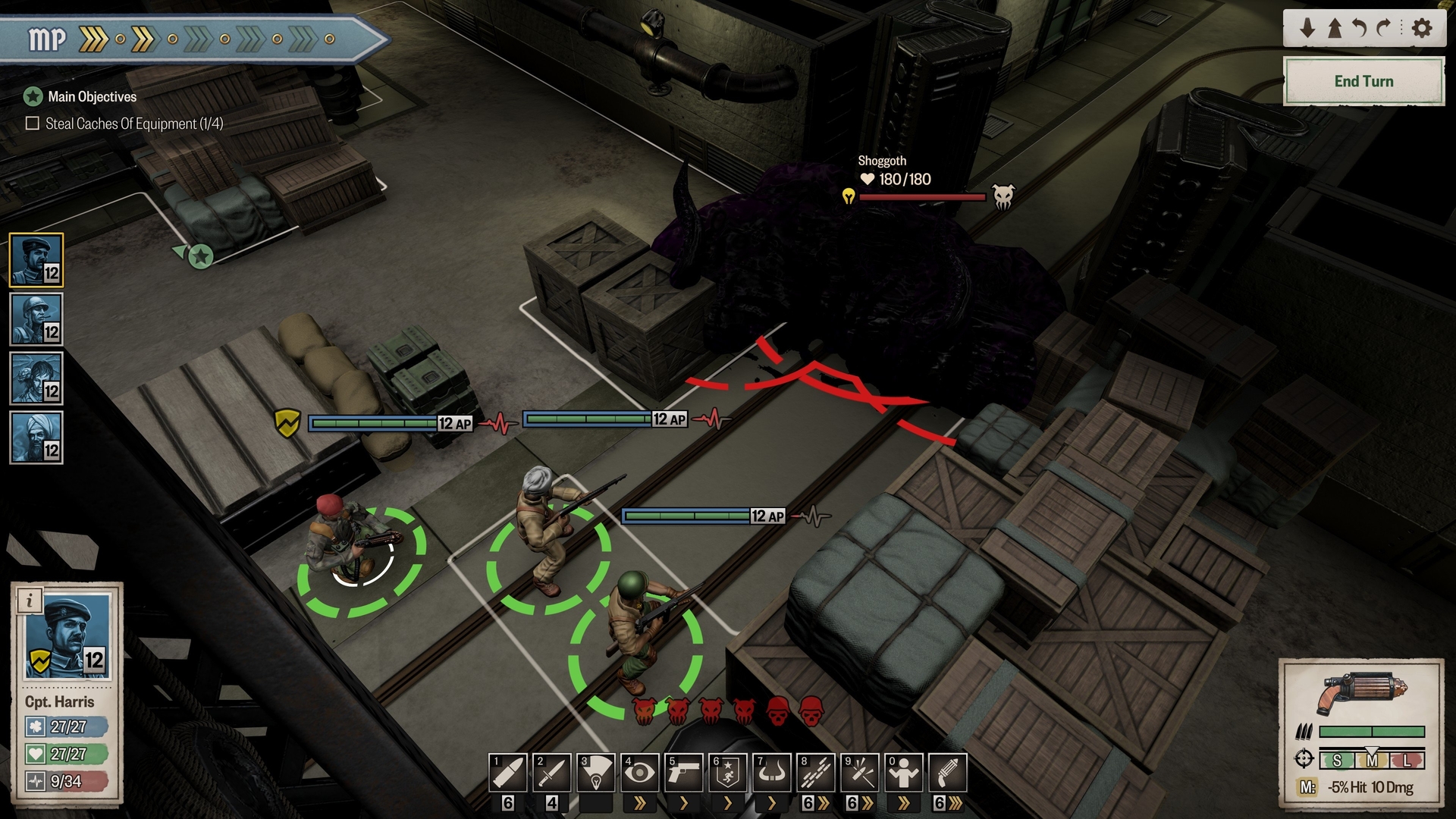 How do you solve a problem like the Nazis? It’s a question video games have never shied away from asking, namely because Nazis make pretty good enemies; it’s a general requirement of decent humanity to hate them and we, therefore, don’t feel so bad about shooting them in the face. Achtung! Cthulhu Tactics gives us a new reason to raise the barrel, Nazis raising tentacle monsters with science. Developer Auroch Digital took the Achtung! Cthulu tabletop hit and digitised it into a classic real-time strategy game with a sprinkling of RPG.

While Panzer Strategy gives players an all-encompassing insight into the battlefield, Achtung! Cthulu Tactics is a decidedly more focused approach to World War 2 strategy. Development is linear and on a strict trajectory; players evolve their units with a wide breadth of skills and develop their tactics according to the new threat. The narrative of Achtung! is all the better for it, with the horror of your enemies increasing with every step and a powerful sense of dread in each move. Gather your militarised team and take on the Nazis, and whatever else they’ve got brewing, in a solid RTS experience with an impressive narrative premise. 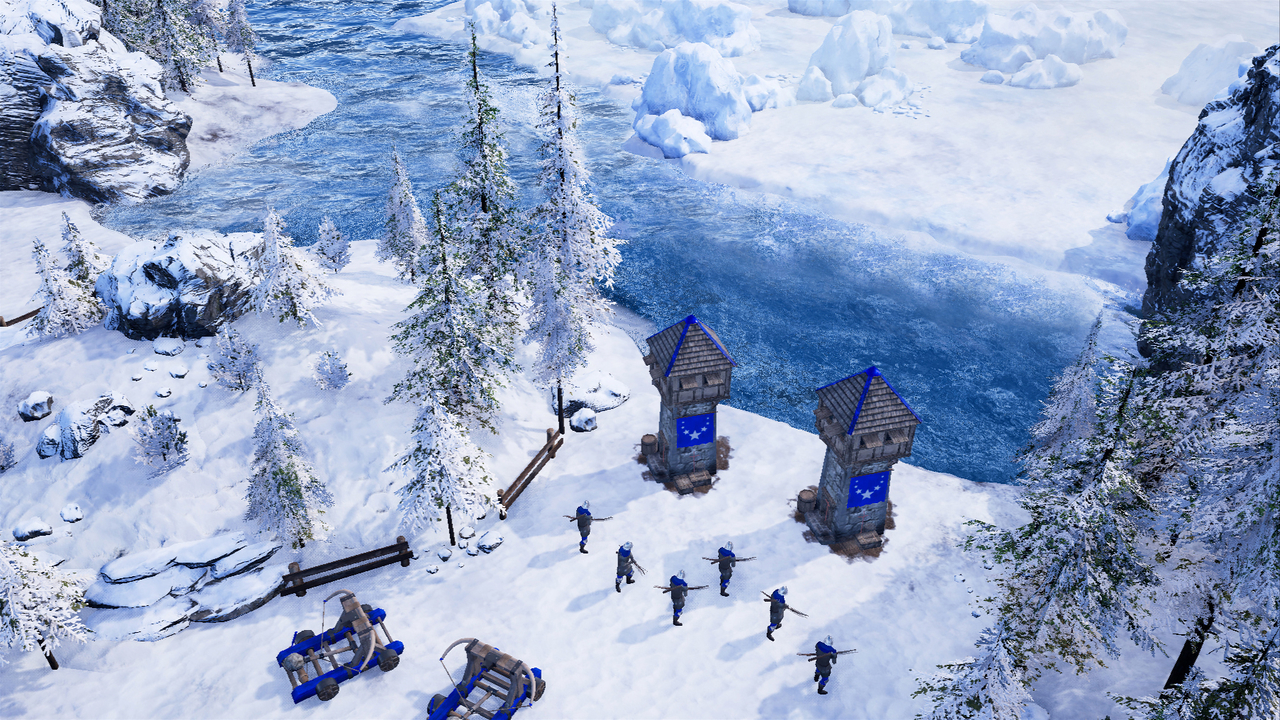 The lands of Valtoria have been ravaged by war, starvation, and distaster. Now it’s your turn to stand up and lay claim to the kingdom, assembling your bannermen in all regions of the map and fighting your way to victory. Pathos Interactive presents a strong, if slightly canonical, real time strategy adventure in which players inhabit a fantastical world as Lord Berrian, a commander with his eyes set on the throne. As you travel through the world you’ll have to gather resources and build communities of supporters willing to follow you into battle, micro-managing each unit’s abilities and skills while maintaining wider control over the full map.

While gameplay is pretty typical of the RTS genre, unique Temples offer some relief of the tried and tested mechanics of the RTS world. Construct Temples in key areas to unlock powerful Natural Powers, skills that can be deployed for widepread destruction. Beware, though, once you erect your Temple, your opponents will be notified and can see how close you are to being able to use your new abilities. That can be especially tricky outside of the single player campaign, if you’re playing a ranked or unranked online game, for example. Bannermen is a strategy adventure done well, with a spattering of unique mechanics to keep players interested. 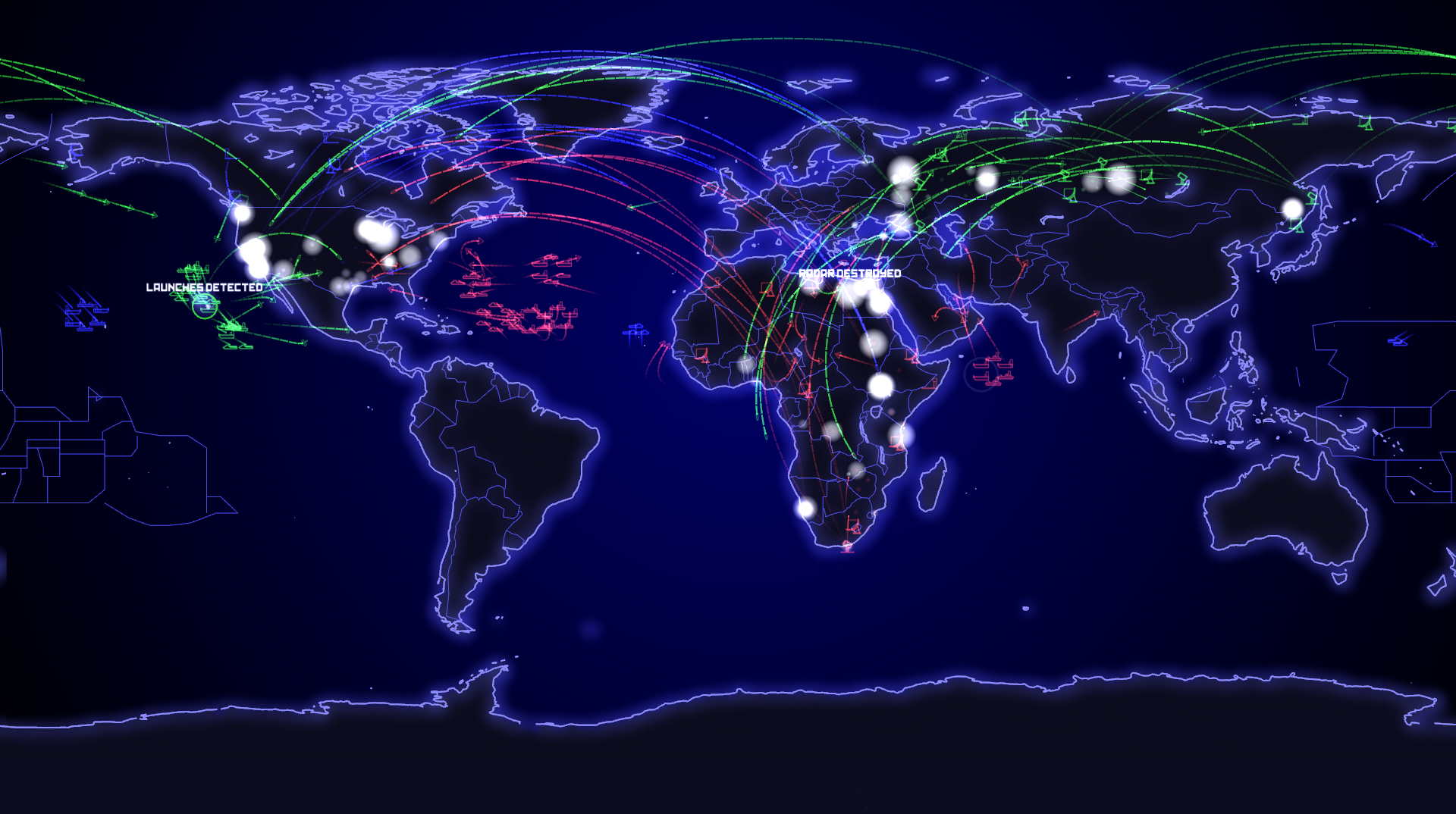 Defcon takes real time strategy beyond the maths of troup count and strength on the battlefield and introduces a more psychological approach. Set during the Cold War, players are tasked with obliterating enemy territories while remaining in the safe, cozy confines of their underground bunker. While there’s certainly enough battlefield action to keep traditional battle strategy players interested, the nature of the nuclear weapons you are detonating require a new level of cunning and skill. Expose your position, or play your hand too much and you’ll have hell to pay as enemy forces are able to stamp out your efforts in one fell swoop.

You’re probably thinking ‘this sounds a lot like a game about nuclear genocide’, and you’d be right. This is an in-depth, richly populated world of nuclear war and all the alliances, paranoia, and terror that come with it. Manage your units, sure, but pay closer attention to the factions supporting you in your endeavour. Never has the phrase ‘keep your friends close and your enemies closer’ been more applicable to a virtual world. 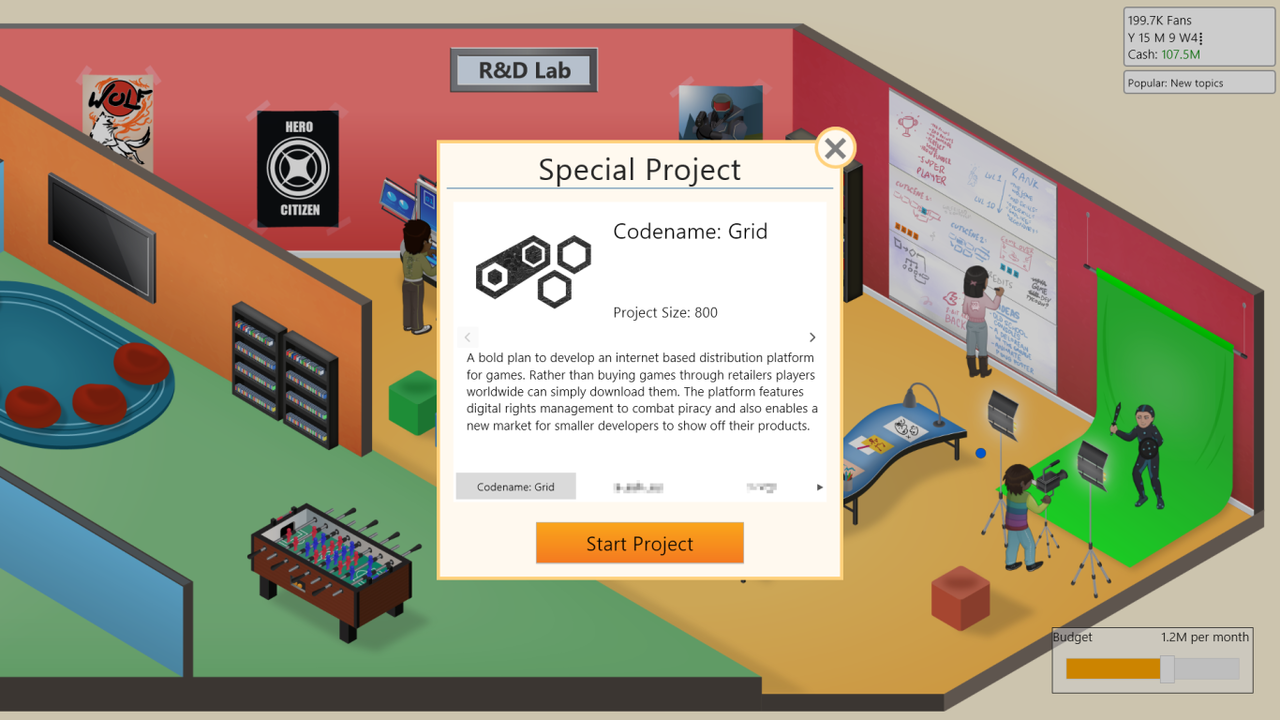 Ever wondered what goes on behind the scenes of your favourite games? Game Dev Tycoon not only places you in the developer’s shoes, but does it on a whirlwind tour of gaming’s biggest moments in history. As you assemble a team of crack nerds and climb the review score ladder, you’ll balance your remaining funds with the benefits of research, game engine development, contract work, and releasing the blockbuster game that will get you out of your Mum’s basement.

Use your cunning knowledge of the games industry to develop the games that sell on each console, living the high life during the casual Gameboy days all the way through to the next generation of consoles and engine technology. Learn from each success and failure to hone your craft and make a name for your studio in the world of game development. It’s easy to see why Game Dev Tycoon flourished when released in XX, giving players a chance to sit in the steering wheel of their own studio is incredibly fun. Experimenting with different combinations of genre, engine, features, consoles, topics and development specialties to produce the perfect experience to get you thinking about every title you download. 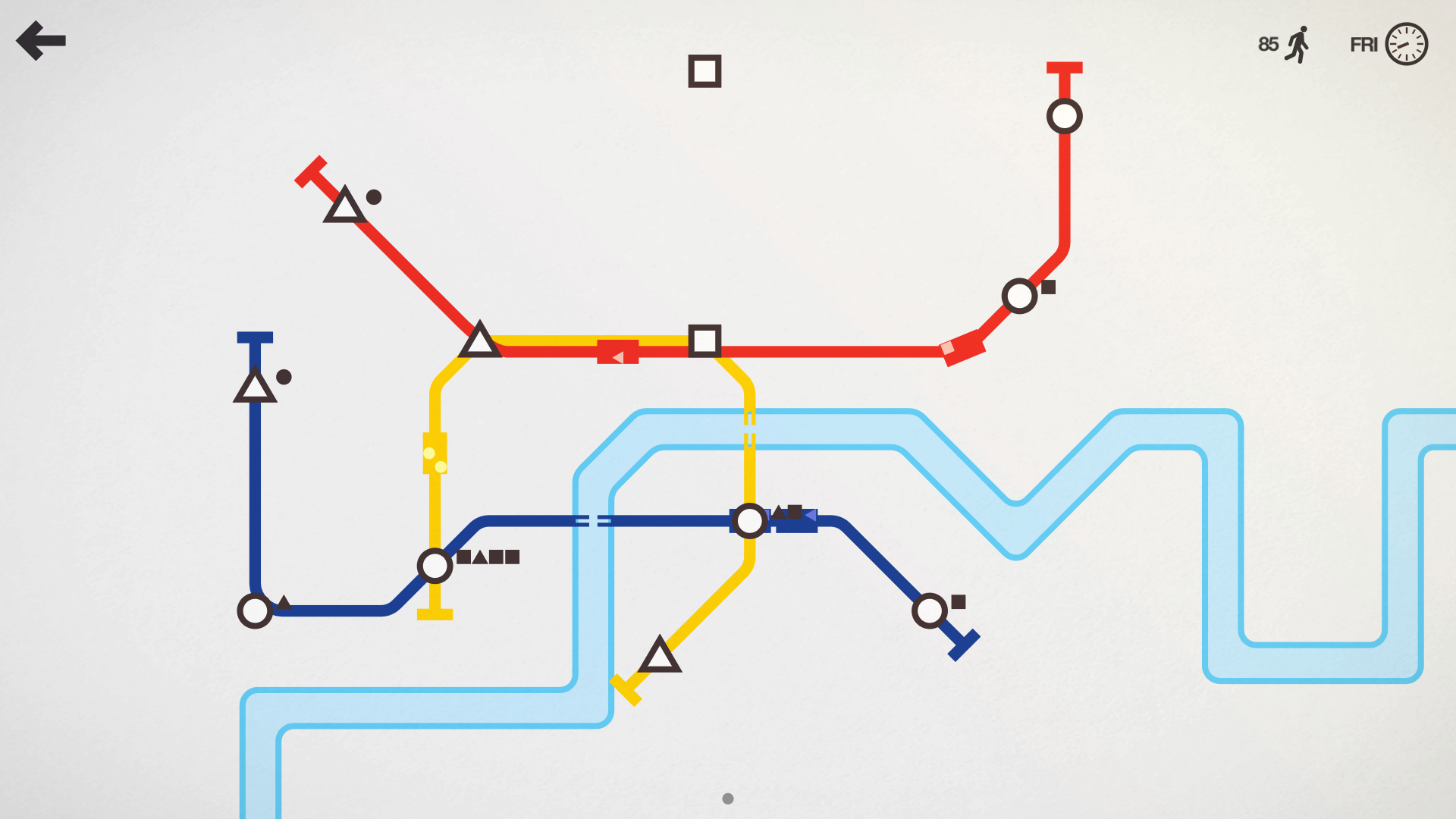 If you’re a commuter navigating the treacherous underground world of subways and tube lines, you’ll either appreciate the complexity of our modern public transport or hate it with a deep, burning passion. Chances are it’s the latter. Mini Metro gives you the chance to put your money where your mouth is, literally saying ‘if you think it’s so bad, try making it yourself’. You start the game with three stations and it’s your job to connect them all with subway lines. Easy enough, but there aren’t only three stations in the world. Think of the congestion.

As the game continues you’ll be juggling a growing city population with new transport demands in order to accommodate the hordes of stressed commuters and tourists waiting to get from A to B. Keeping all of your trains running efficiently and ensuring a successful final design is no easy task. If you find yourself struggling in the time-sensitive main game mode, you can always kick back with some good old city planning in Creative Mode, or continue your failed design in Endless Mode which alleviates some of the passenger thresholds and train capacities. Dinosaur Polo Club’s puzzle strategy experience is definitely a unique title, just don’t spend too long critiquing the tube’s layout after becoming a transportation maestro. 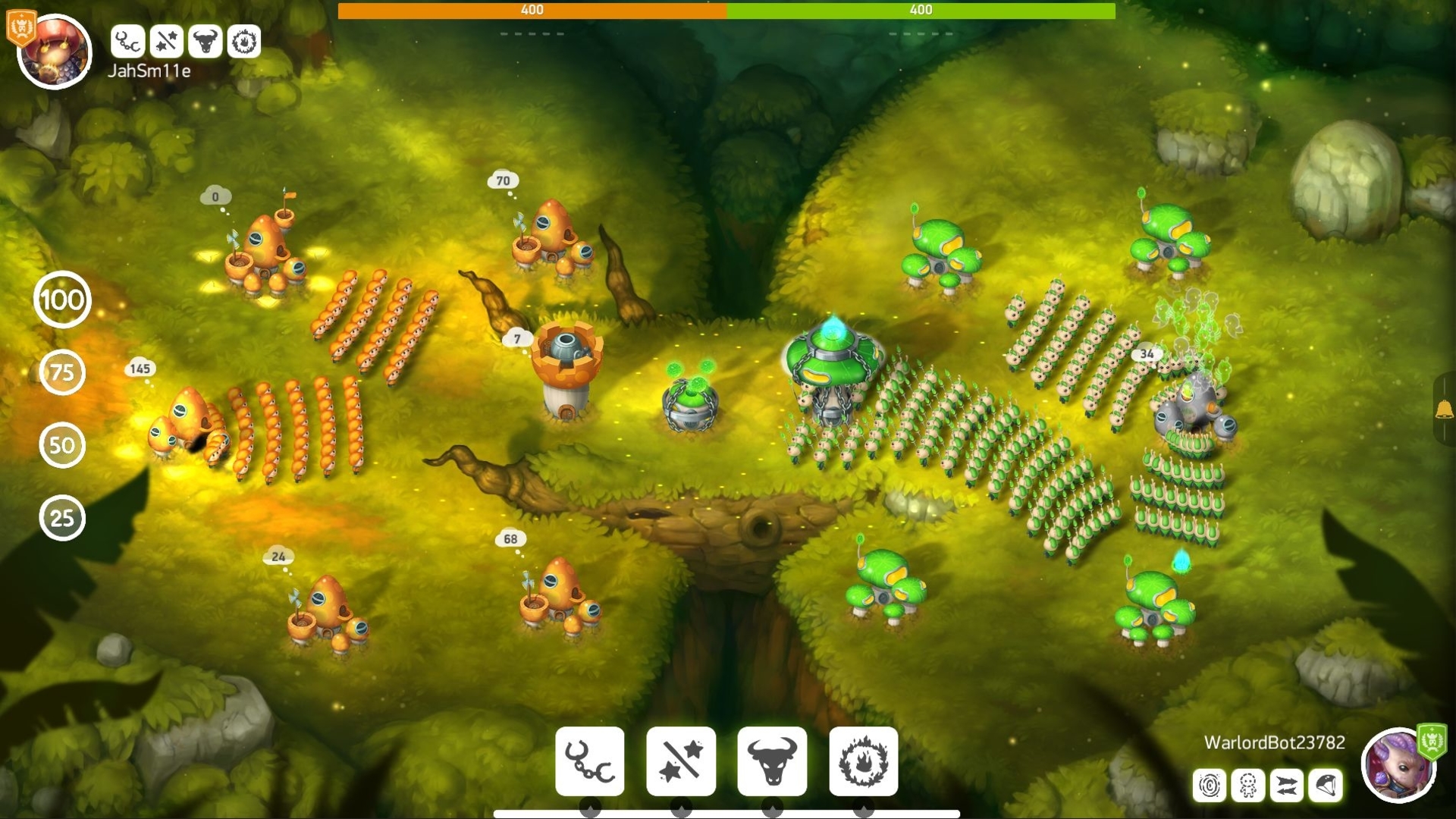 The sequel to the original Mushroom Wars RTS experience, Mushroom Wars 2 brings a refreshed art style and brand new multiplayer opportunities to Zillion Whales’ forest adventure. A single player campaign sets players on a journey across over 100 missions meanwhile online and local multiplayer with ranked league tables gives you the chance to put your fungi management to the test. Build your villages, towers, and forges all while destroying those of your opponents to seal a victory in the easy to pick up, hard to master battlefield experience. There’s plenty of charm in each hero character’s abilities and the visual design of your arena, but the mechanics are also working hard to provide a rich experience under the hood.

Defeat your enemy by taking over their buildings and obliterating their forces, all while balancing your own troops’ movement and population. You’ll have to act fast, Mushroom Wars has been designed to offer a lighter but more immediately satisfying experience with a Nintendo Switch port compared to its PC RTS counterparts, so battles rarely last more than 10 minutes a go. 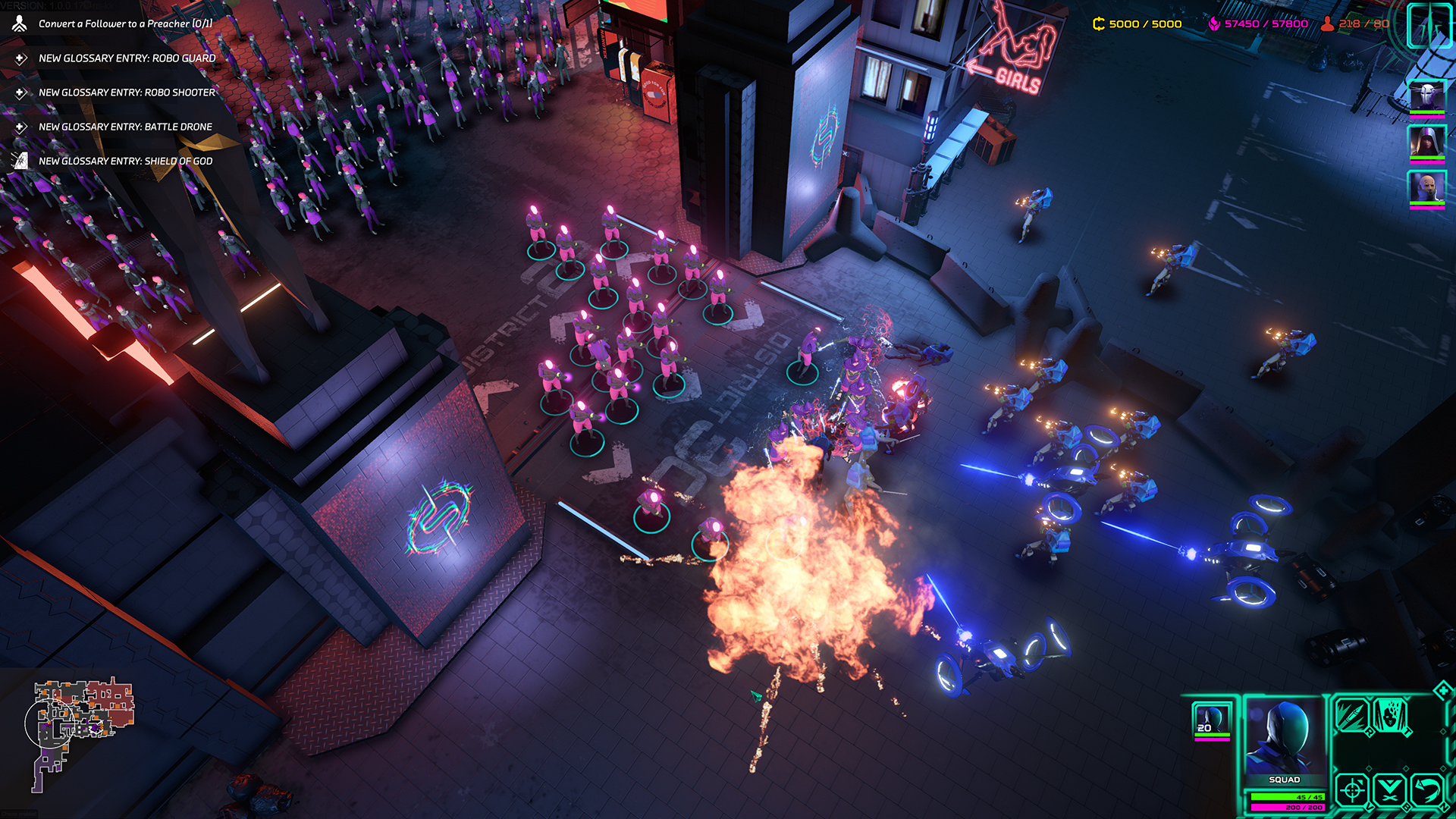 In the age of wars of ideology, Re-Legion presents a recognisable narrative overlaying a complex real time strategy experience. The leader of a cyperpunk cult, your job in Re-Legion is to convert the disillusioned masses of drug addicts and alcoholics into cult members, eventually training them up to obliterate the non-believers. This dystopian world has been raised under an oppressive cyber regime, and it’s your job as the charmingly dangerous cult leader to shape your own religion, evolve your abilities, and recruit an army of dissenters.

Lead your followers into battle and watch as they gladly lay down their lives for your cause, attacking unbelievers and corporations in order to reach enemy lines and hack their way in. Re-Legion abides by classic RTS structures, but with an intriguing story underpinning the experience’s unique atmosphere and subject matter. What happens when one narcisstic idealist utilises the power of the downtrodden? That’s up to you! 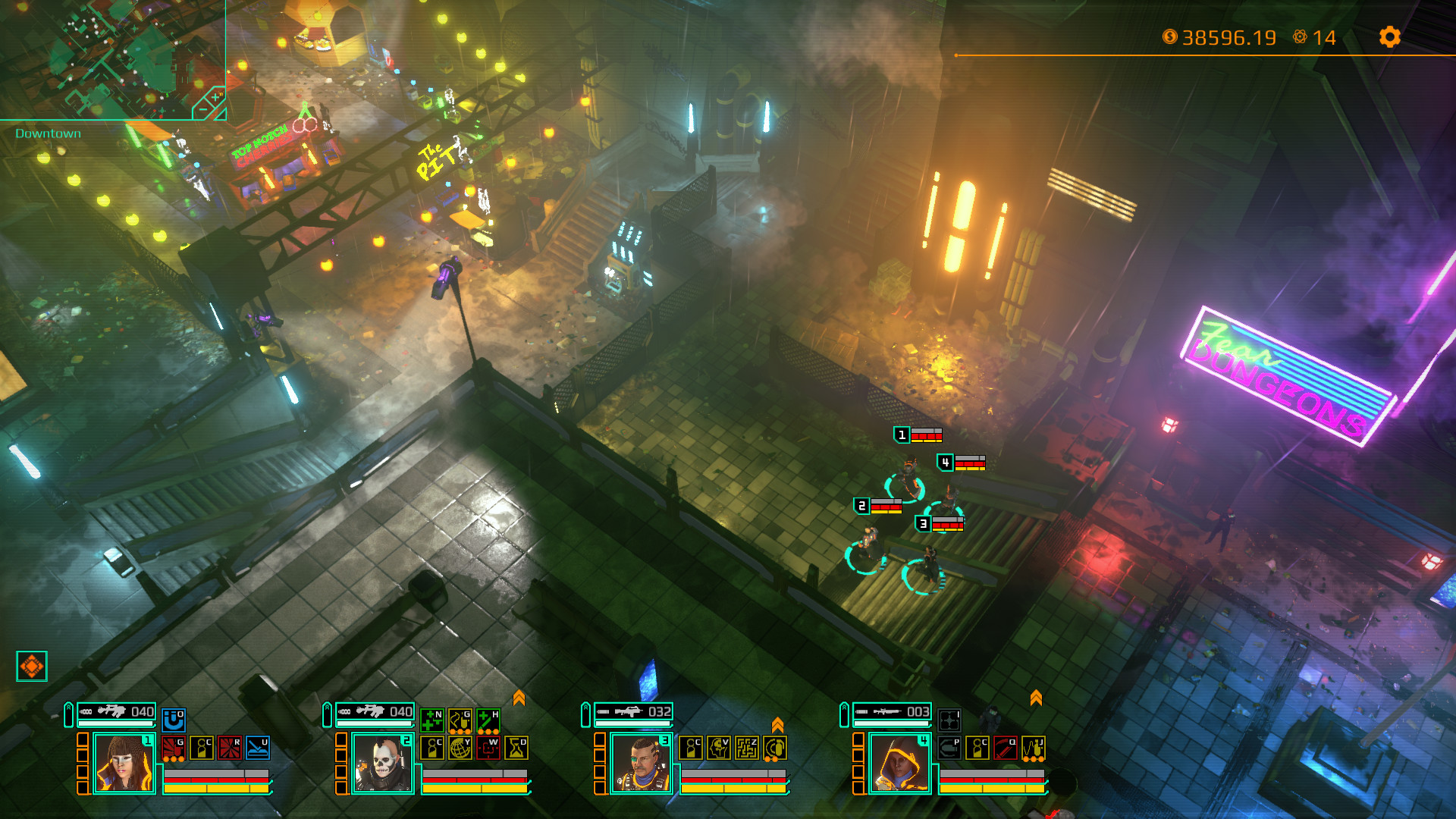 The worlds of Satellite Reign and Re-Legion could be one and the same. Rainy cyberpunk city streets ruled under the heavy fist of mega-corporations are often the site of riotous dissent, though Satellite Reign loses the organised linearity of Re-Legion in favour of an open world of exploration and adventure. As you move through the city you’ll come up against a range of enemy forces, it’s up to you to assemble the right team and select the best strategy for the job.

All of your work to unclench the corporate grasp over this neon-lit city is fully your own. The creative freedom afforded to players in their street-level escapades singles Satellite Reign out from other items on this list. With a game world championing emergent gameplay, players can build their armies by cloning promising members of the public and selecting from a wide talent pool of mercenary rebels, take on each moment of combat in their own unique manner, and explore a world of new objectives and missions.

Next up: Public transport woes, hordes of zombies and dinosaurs