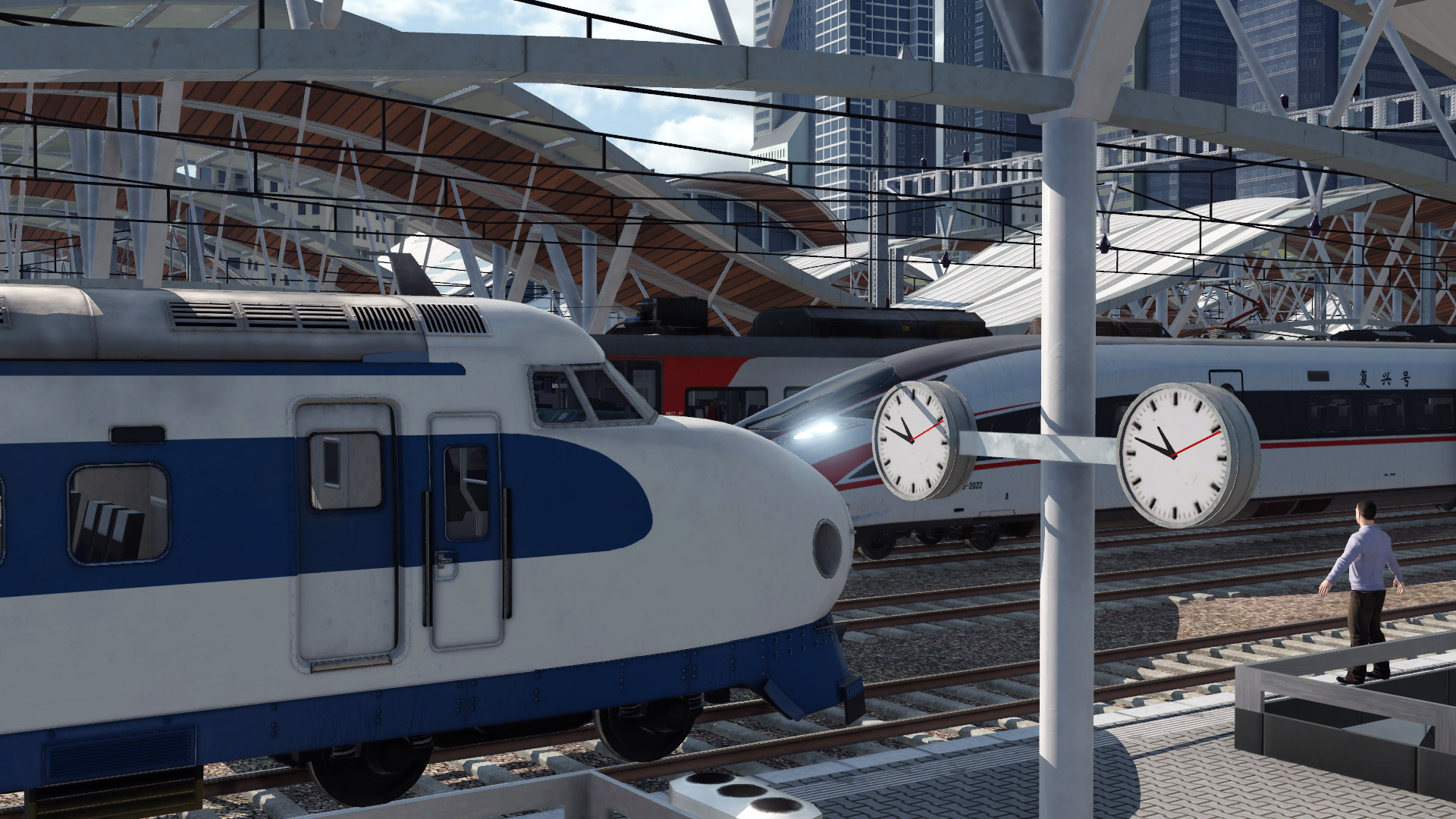 The original Transport Fever was Urban Games’ second-ever release, after the more streamlined Train Fever got people talking. Along with its’ contemporaries, Transport Fever ushered in the introduction of a space for people who hate going outside, and yet really really love trains. With under 15 employees, one thing we can gather (aside from straight-forward naming being their MO) is that transport sims are a labour of love for the Swiss team.

Transport Fever 2 involves much of the same, but the budget and technology this time around give it a little more universal appeal. Sim games, in general, have become more of an accessible entity since the first game’s release, with indie management sims dominating a good few spots on the Steam charts. Games like Cities: Skylines, Frostpunk, Rimworld and Two Point Hospital have brought a vibrancy and energy to the genre, making them cooler and marketing them as the perfect way to unwind after a stressful day. 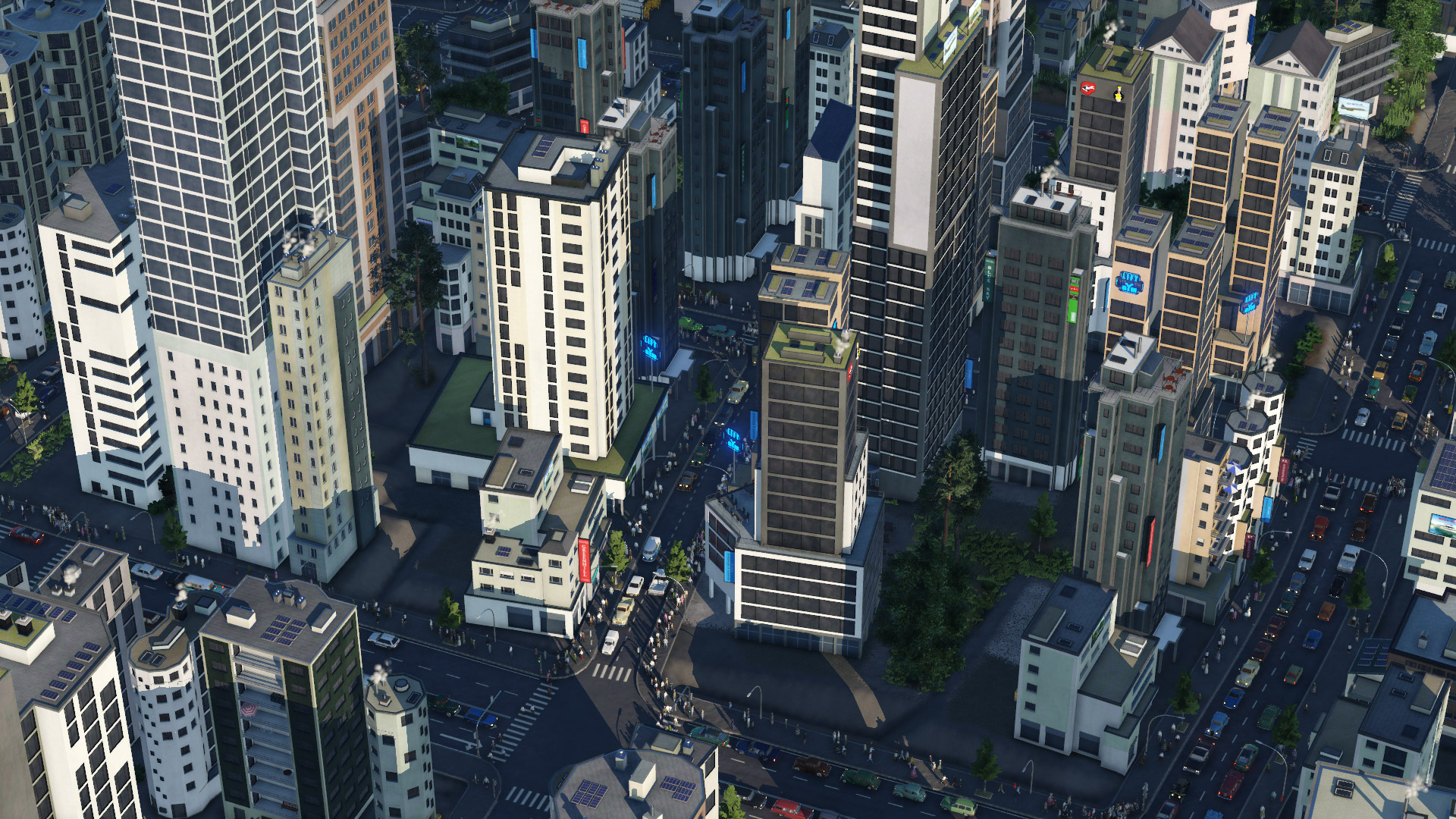 And really, for people like me who aren’t exactly superfans of the genre, Transport Fever 2 fills a perfectionist hole in my heart I never really knew I had. It is, in its mild jankiness, borderline frustrating. It tugs at your CPU and the FPS tanks whenever a build is underway (especially late game), the pathfinding is improved but still sometimes leaves you staring open-mouthed, and the more “cartoony” style overlays may not be what some fans had in mind – but my god is it satisfying when it goes right.

This game is dangerous. I could pour hours of my life into it and then feel qualified to criticize the highest echelons of local government when my flawless suburb provides speedy and efficient transport for all. I may go mad with power, flooding cities with noise pollution and cackling as they expand… but your mileage may vary. Either way, the reward from success in Transport Fever 2 remains hard enough to warrant admiration, yet accessible enough to allow new players to sink in slowly. 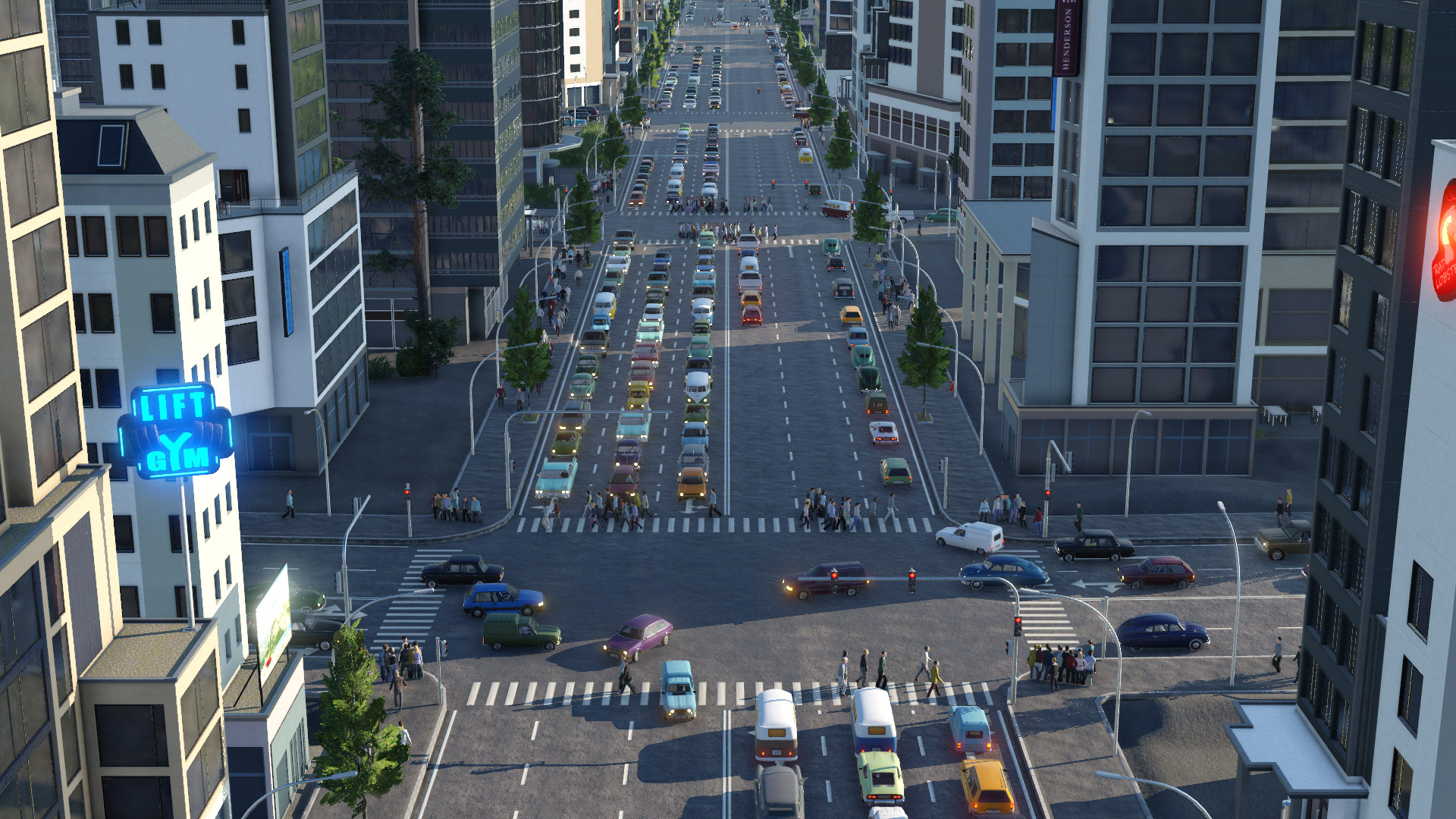 Some of the smaller details are a marked improvement from TF1, and highlight just how much the devs care about their craft. Buses will show their destination and next stop on their rotating displays, for example – a detail nestled in there that seems small but adds to a wider sense of immersion and focus. You can also control time with more finesse than in the previous game, slowing and stopping the clock to allow for some forward planning.

One of the minor downsides of the game is still its user interface. Plagued with many of the same basic issues as TF1, for people used to the more user-friendly ‘tycoon’ games, sometimes you just want to click and drag. Drawing surfaces and roadmaps, planning modes, and overlays would be nice in a game this complex, as cash can be easily wasted if a mistake is made in production. Weirdly, the music also seems to stop if you leave things stationary for too long, so take good care of your menu screens. 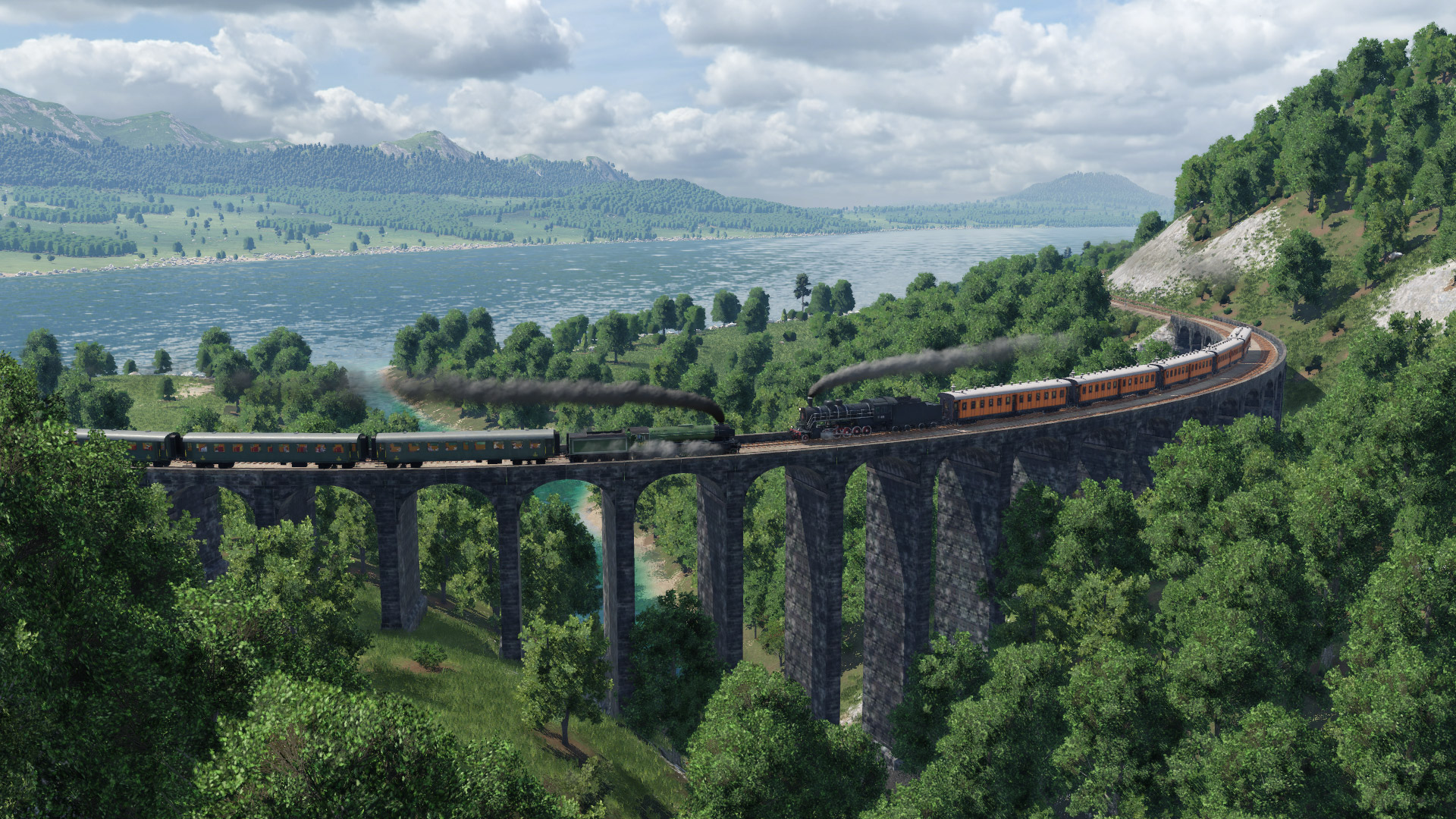 Towns also require less resources than in the previous game, a move which may prove controversial. For many, those beefy cargo routes were a crucial part of gameplay. This said, the limit on requirements does make for more complex and challenging systems, as the chains demand higher numbers of supply vehicles per city route, so the jury is still out on whether long-time fans will respond well to this change.

But enough about the snags. Transport Fever 2 introduces some real gems in terms of features and concepts, the ability to merge stations cuts down a lot of frustration, and the addition of some impressively-sized oceans really gives you the chance to explore aquatic vehicle chains in more depth. The use of colour coding is expertly done, so as not to detract from the immersion and detail of the game, and roads can be given levels and elevation. If you really want to get nerdy, there’s an option to set the music to be era-dependant, and you must absolutely do this. No deviation. 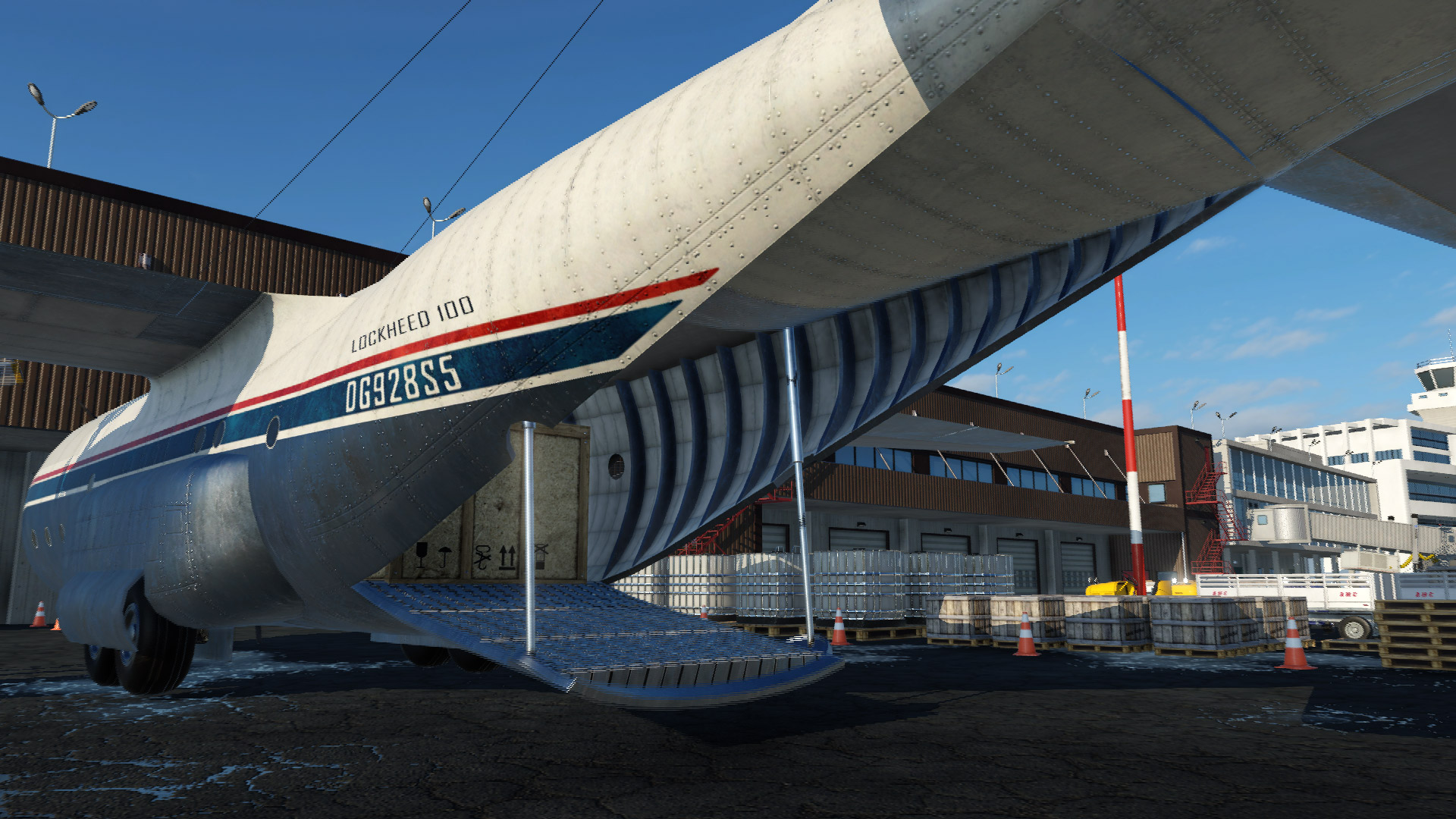 For an indie game with such a small team, TF2 is pretty damn impressive. As previously stated, it is a labour of love, and the fans seem to have largely guided its production process. If you already own the previous game you’ll even get a sweet discount on Steam, so there is really no excuse to not give it a go. From the moment you start you will be rewarded with incredible graphics, sweeping visuals, and missions that whisk you through the history of transport. Each asset is gorgeously crafted to look as individual and as detailed as possible; you’ll probably spend a good few minutes just zooming in and out to admire the view.

For fans of the series, this is a truly exciting development. It’s smoother and richer than its predecessor and has enough unique features to leave you pleasantly surprised with every upgrade and chapter. The campaign is long and varied, and the difficulty curve gives enough scope to appeal to all levels of interest. I’m going to waste a lot of time on this game. And I’m probably going to miss my train.