80. Thomas Was Alone A Golden Oldie that still holds its own in the independent scene, Thomas Was Alone is a staple in every gaming curriculum. Controlling various coloured shapes, each with their own abilities, to solve maze-like puzzles doesn’t sound that enthralling, but Danny Wallace’s narration adds a new dimension of context to an […] 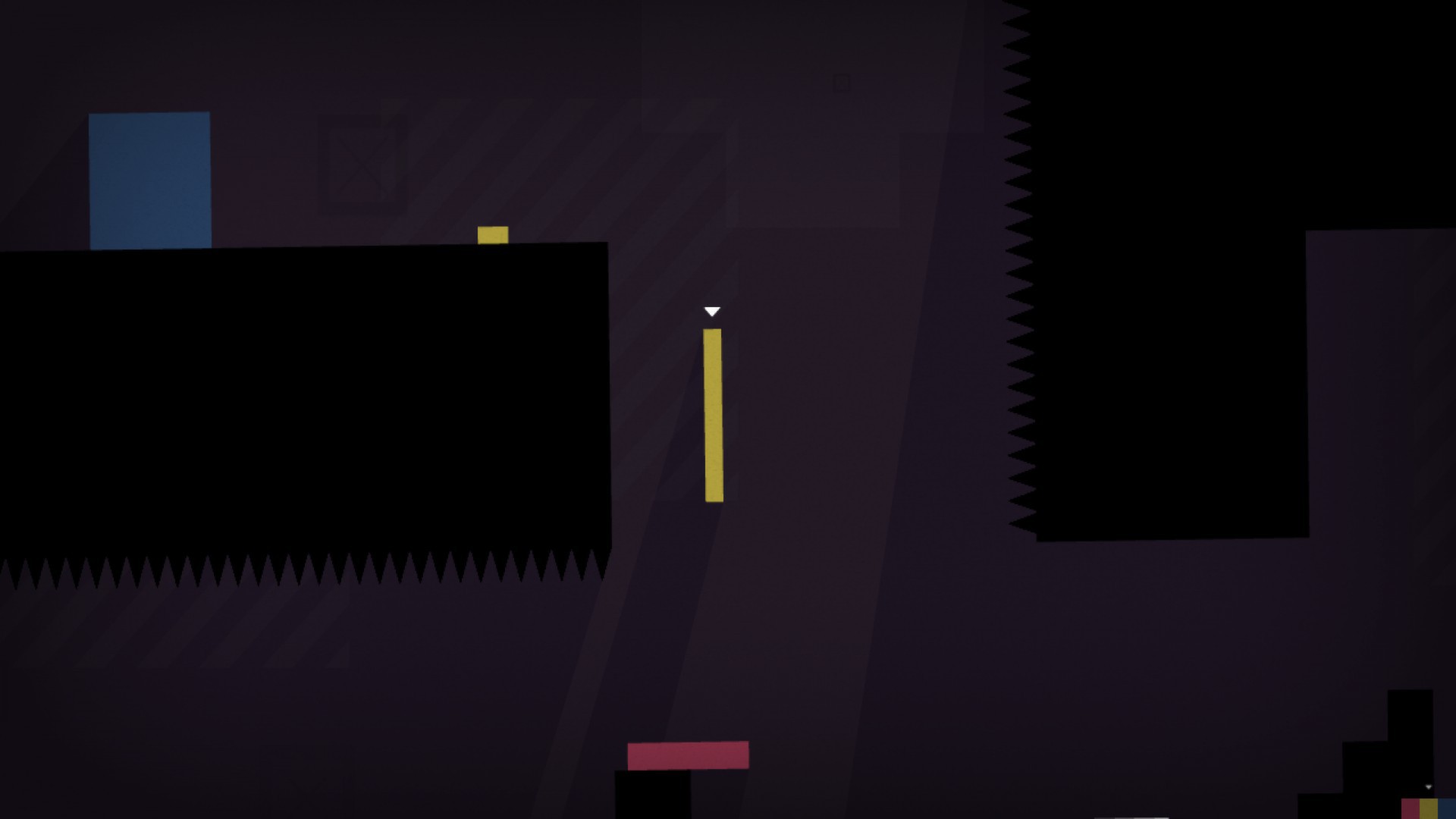 A Golden Oldie that still holds its own in the independent scene, Thomas Was Alone is a staple in every gaming curriculum. Controlling various coloured shapes, each with their own abilities, to solve maze-like puzzles doesn’t sound that enthralling, but Danny Wallace’s narration adds a new dimension of context to an otherwise abstract experience. As the narration reveals each shape’s innermost thoughts and feelings, players begin to identify with the oblongs they encounter, finding themselves enveloped in a rich world of detailed storytelling hidden behind a minimalist facade.

And what a world it is. Without spoiling too much, Thomas Was Alone takes place inside a computer, with each shape representing a different AI system. Every challenge these friends and frenemies take on is one linked intricately to the inner workings of a computer system and the way the narrative deftly balances around this setting makes every mechanic feel substantiated. Thomas Was Alone is a celebrated title around the indie community, and it’s not difficult to see why. 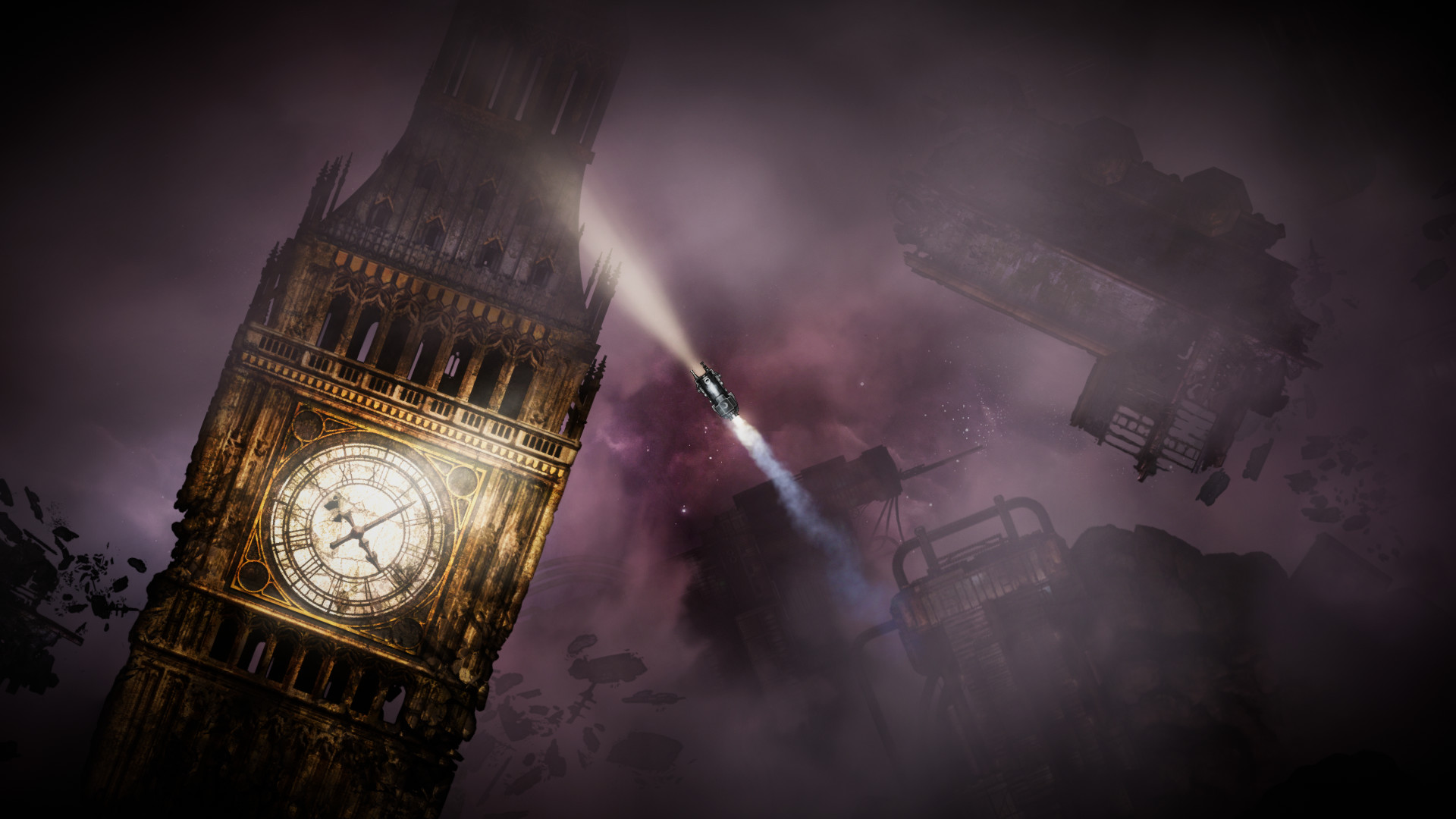 Barely still chugging through space in your badly damaged steam locomotive (yes, you read that right), Sunless Skies begins with you trying to reach relative safety at the nearest town. You make it there by the skin of your teeth but sadly, the ship’s captain doesn’t survive the journey. There’s only one thing left to do: promote a new captain. You.

All worlds are now your oyster. You can travel the skies to complete quests, trade and hire new crew for your locomotive. Sunless Skies is set in a fascinating parallel Steampunk universe in which the Victorians somehow accomplished space flight and colonisation. As you explore this world you’ll fight space pirates and meet a lot of interesting folk, and this is where one of the game’s strengths lies: its writing. And not only is the formal story engrossing, but there’s a lot of emergent storytelling to be found in the harsh survival conditions you’ll face amongst the stars. 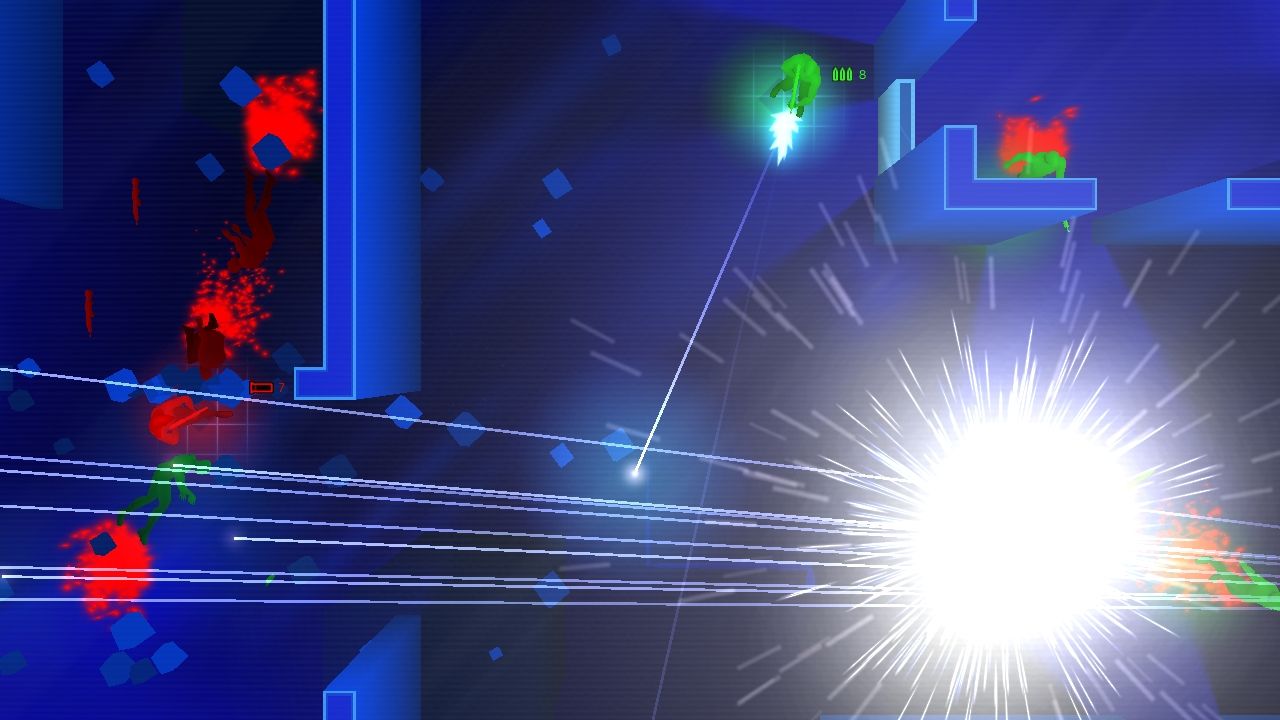 As one of the early successes stories of the indie game boom, Frozen Synapse lives on as a title to remember in the minds of PC gamers. Receiving glowing reviews from critics at the time of its release, it continues to be held up as an example of excellence in the turn-based strategy genre. The premise is quite simple. You have a squad of guys. They’re like SWAT or something equally as badass. You have a dangerous mission. Usually either to rescue someone or take out some bad guys. From there you plan, plot and issue orders to your squad devising a strategy to bring your guys out on top. It’s kind of like battle chess when you think about it.

Often regarded as a title that modernised the turn-based strategy genre with more exciting game modes and a modern interface, Frozen Synapse remains, to this day, just as fun to play as when it released. You also get a free copy for a friend when you download it so you can argue over who is the best strategist in your bid to completely wipe out each others team. 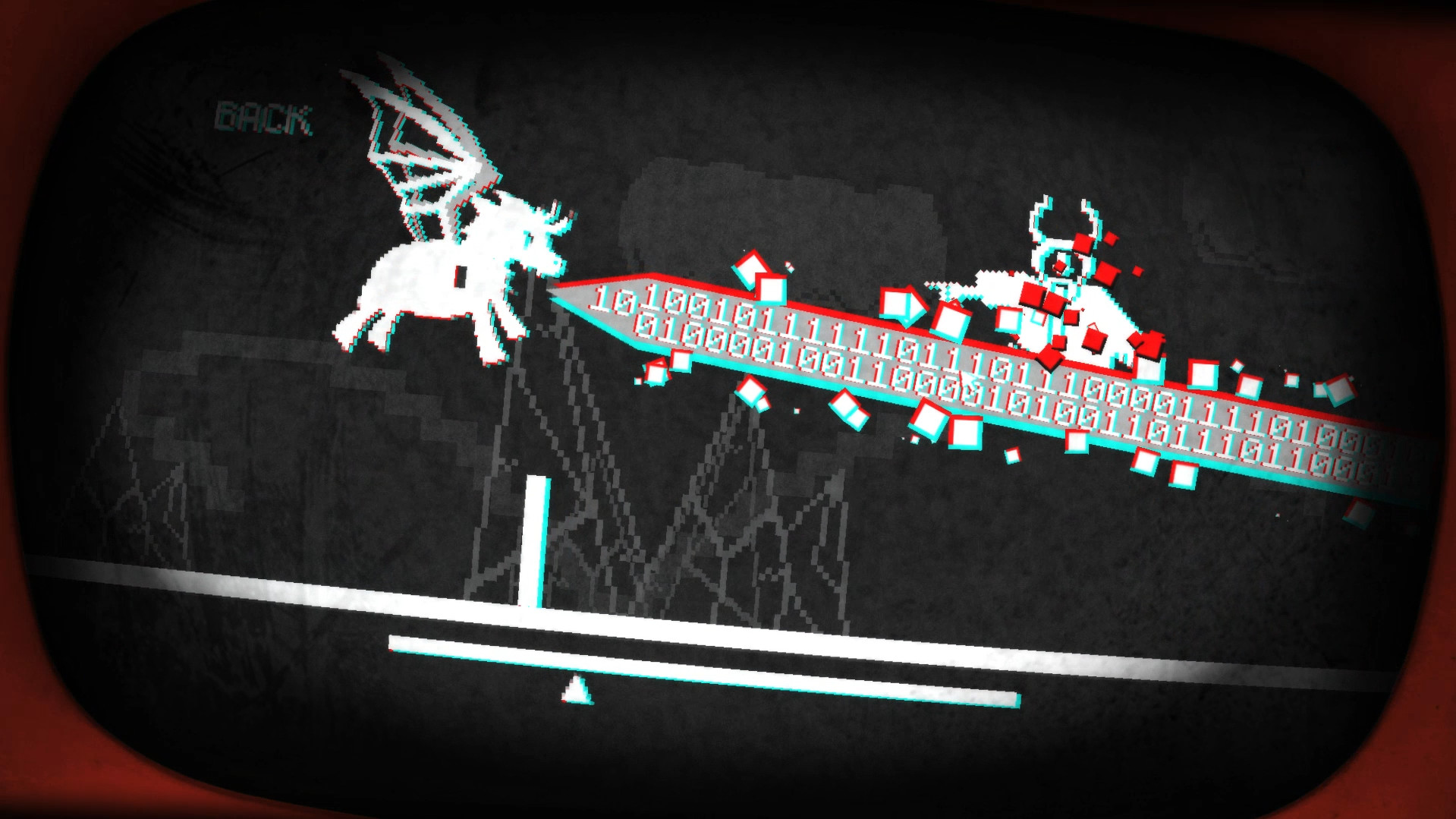 Pony Island epitomises what indie games can be. This completely bonkers and unpredictable arcade nightmare would never be dreamt up in the focus testing room of a triple-A studio. Beginning as a simple, innocent-looking pony jumping game that lampoons the mechanics of crappy smartphone apps, it soon descends into something much darker, weirder and more engrossing.

Without wanting to spoil too much, you’re very much at the mercy of a crazed arcade machine AI gone wrong, fighting to survive and escape. Along the way you’ll experience frequent shifts in game mechanics, bizarre and funny dialogue and suitably wild pixel art. One of the highlights is a sort of coding-lite mini game, a recurring puzzle that has you hack the game and rework how it functions. One thing’s for sure – though Pony Island is only a few hours long, those few hours will stick with you long afterwards. 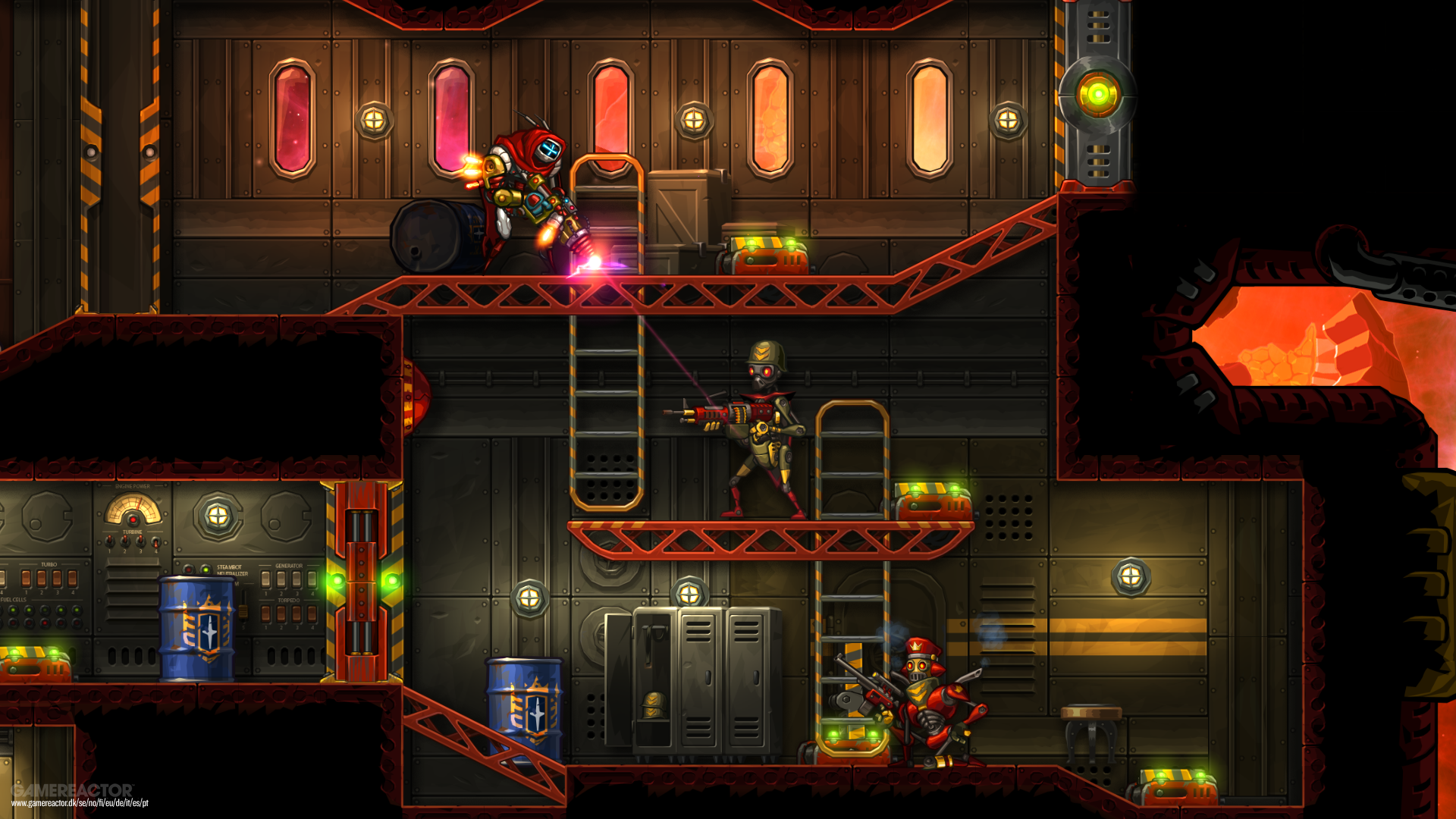 The folks over at Image & Form certainly aren’t afraid of trying something new. With SteamWorld Heist, our beloved universe of steampunk robots are taking on side scrolling shooter action. Board a variety of procedurally generated spaceships as Captain Piper Faraday and command your crew of motley bots to loot the vessel for all its worth. Of course, there are enemy bots to contend with. Careful attention must be paid to every trajectory of every bullet you fire. Bounce your bullets off the walls and objects around each spacecraft to complete satisfying combo-kills and ricochet to your heart’s content.

It’s the perfect mix of easy to pick up and tantalisingly difficult to master, each trick shot leaving you yearning to develop your skills further to enact that all-in-one takedown you’ve always dreamt of. Expect plenty of garbled dialogue, weapon and crew upgrades and… hats. 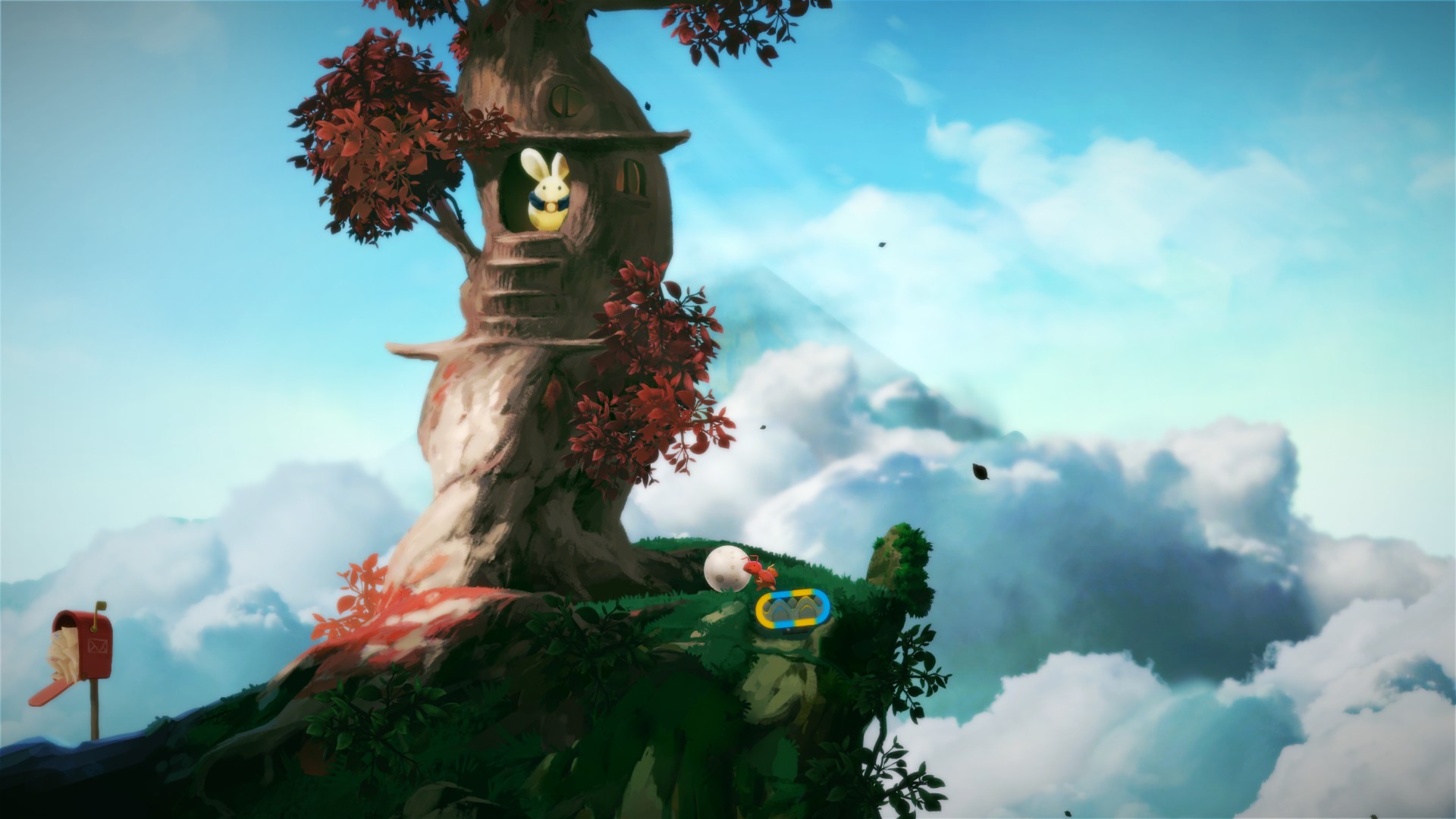 Yoku’s Island Express sounds like it would be a left-field pitch to a video game version of Dragon’s Den, if there ever was one: a pinball game, except it’s also a Metroidvania. I know, who in their right mind would think up that combination? But more importantly, how the hell did they achieve it, and so brilliantly?

The titular Yoku is a dung beetle who emigrates to Mokumana island in the hopes of having a relaxing life as a postman. Deliver a few letters here and there, and spend the rest of the time sipping cocktails on the beach – a masterplan, if there ever was one. But no such luck: when Yoku arrives he finds the postal service in absolute disarray, and even more troubling, a whole of drama involving ancient island gods.

As Yoku, you’ll explore Mokumana island to deliver mail while getting to the bottom of the trouble that’s afoot. It’s a platformer controlled partly with flippers, and that’s where the pinball element comes in, sending you whizzing around little circuits to collect fruits and ancient relics. It’s such a genius match, any initial doubts melt away in minutes. 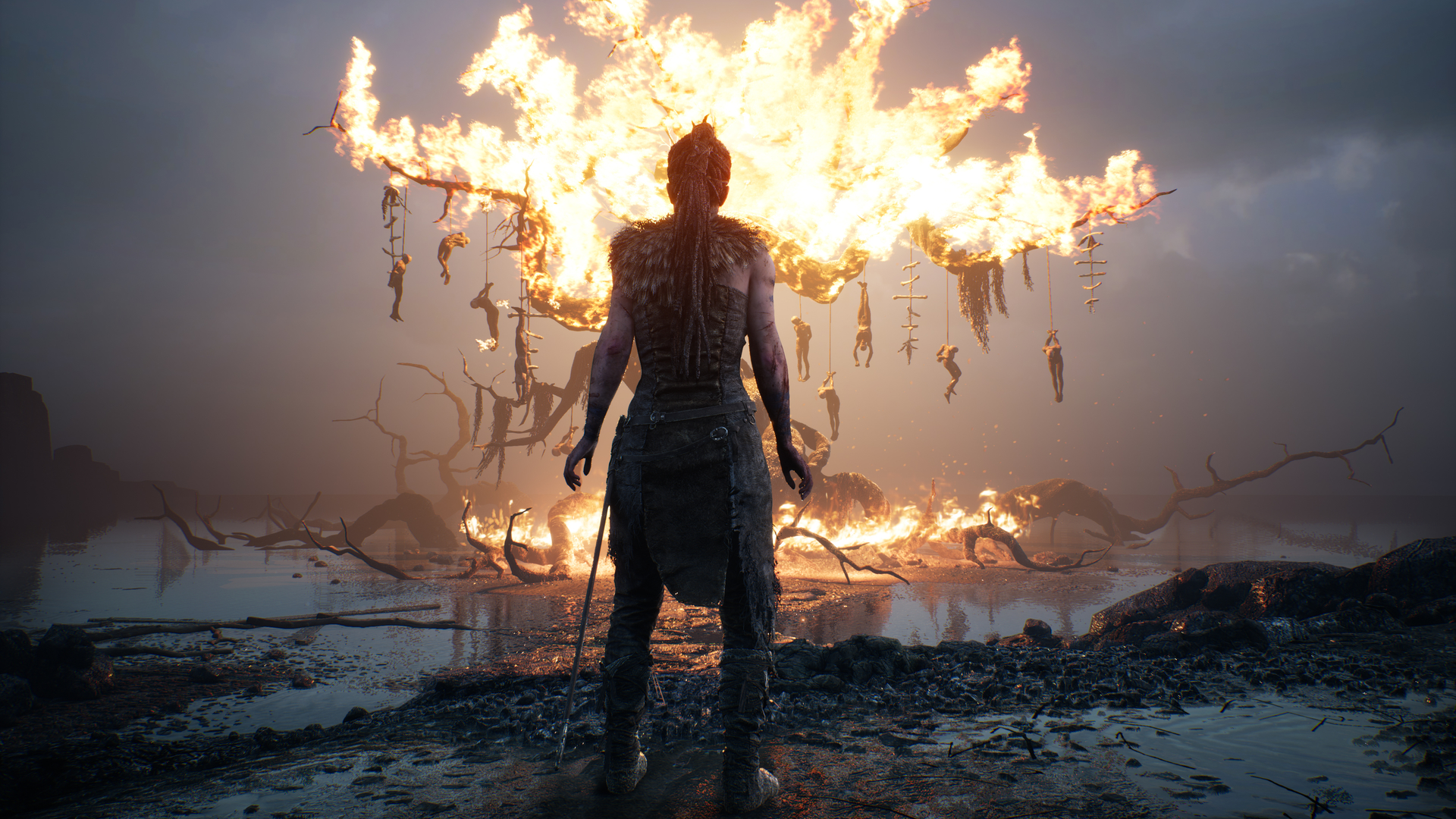 A Norse adventure takes you and your warrior protagonist Senua on a journey to Helheim as you attempt to save the soul of your deceased lover. This isn’t your typical hack and slash fantasy game, though. In your bid to defeat the goddess Hela, you’ll have more than disfigured soldiers standing in your way. Senua also suffers from psychosis. While she believes her condition to be a curse, the unique focus ability it provides allows her to see the world around her differently, an integral mechanic in the game’s puzzle solving sections.

Of course, it’s not all superpowers. Hellblade developers Ninja Theory worked with a number of experts as well as people experiencing psychosis to develop a faithful representation of the condition. Voice acting offers the most obvious prowess in this design, with the voices in Senua’s head providing an almost constant soundtrack to the horrors she witnesses in the world around her as well as in her own mind. There’s so much going on in Hellblade it’s almost impossible to sum up, but all those layers of mystery and horror converge to create a symphony of artistic expression. 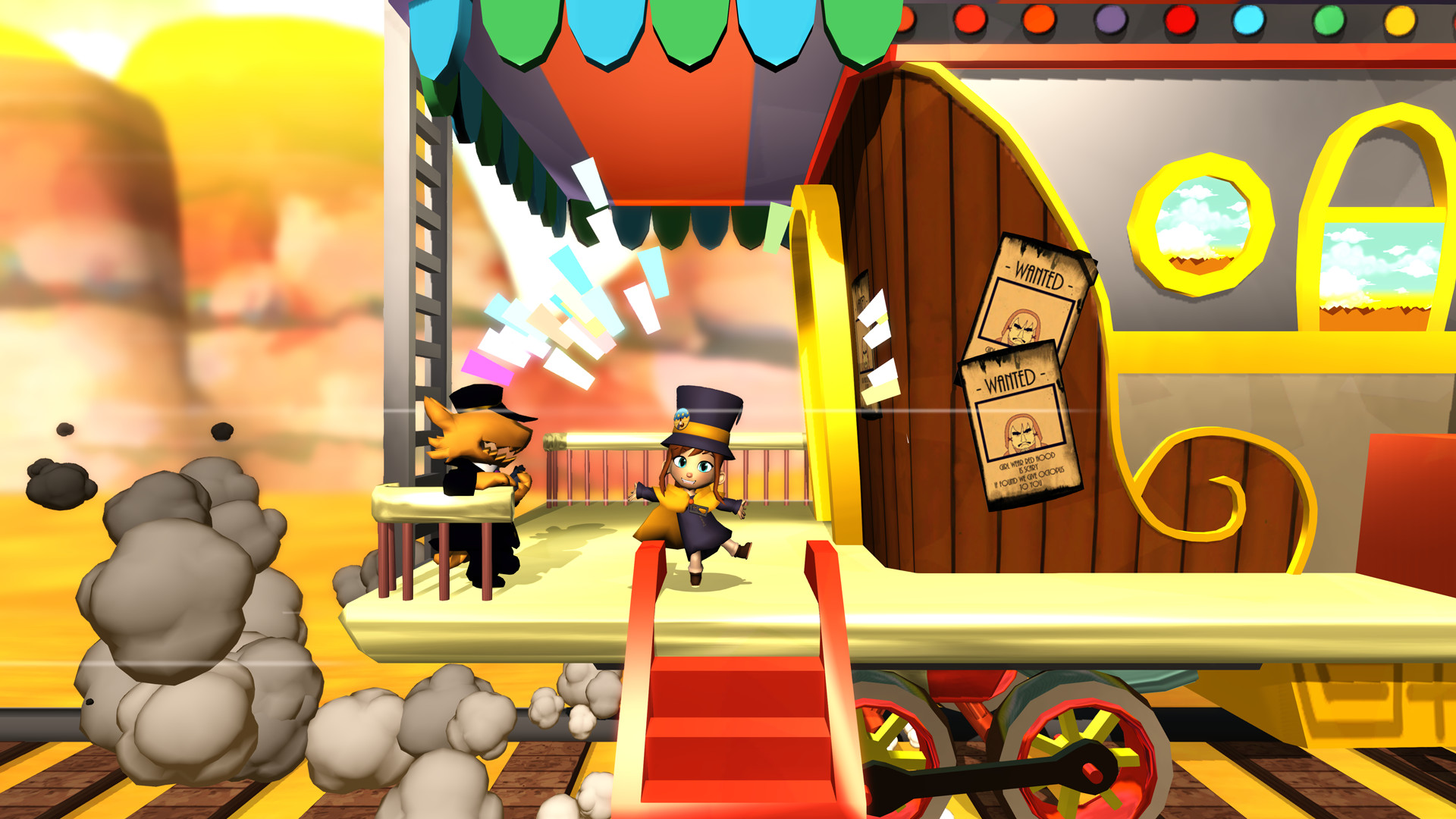 A Hat in Time is the playful story of a little girl and her spaceship. After losing her fuel mid-adventure – god, I hate it when that happens – she has to descend to a nearby planet where the Time Pieces have been scattered. It’s not exactly going to be as straight forward as to go pick them up, there’s a whole bunch of bad guys on the planet below standing in her way.

Armed with her trusty, and stylish top hat, you’ll explore a vibrant world in this action-filled 3D platformer. It’s seld admittingly cute-as-heck with a hat full of charm to boot invoking many of the classic 3D platformers we all came to know and love. Exploring this vast and colourful world isn’t going to be easy but you have a host of magical powers at your disposal as you track down your missing Time Pieces and get back to what you do best, adventuring! 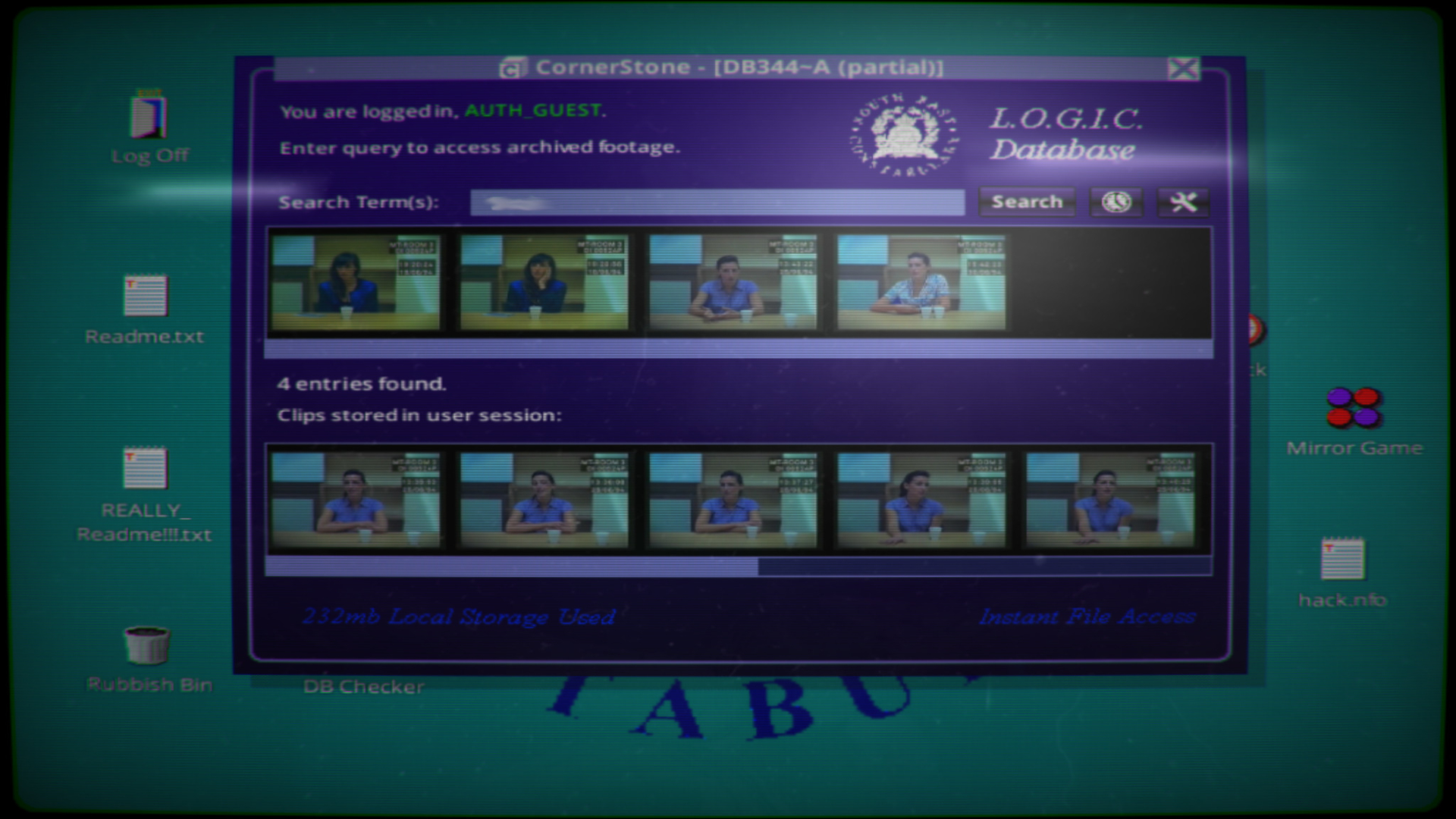 And yet, Sam Barlow’s narrative delight keeps players on tenterhooks with much of the action taking place on whatever scraps of paper you have lying around your computer. You’re tasked with piecing together clips of interview footage that eventually tell the story of a grisly murder, ordering each snippet of footage by date and sorting by transcribed tags to get to the bottom of the mystery. Each tape is a tantalising window into the dramatic lives of Hannah and Simon Smith, the latter having gone missing prior to the game’s opening. While the design and direction of each snippet is intriguingly moreish, it’s the deft performance of Viva Seifert that will have you analysing every body movement and word in your sleuthing. 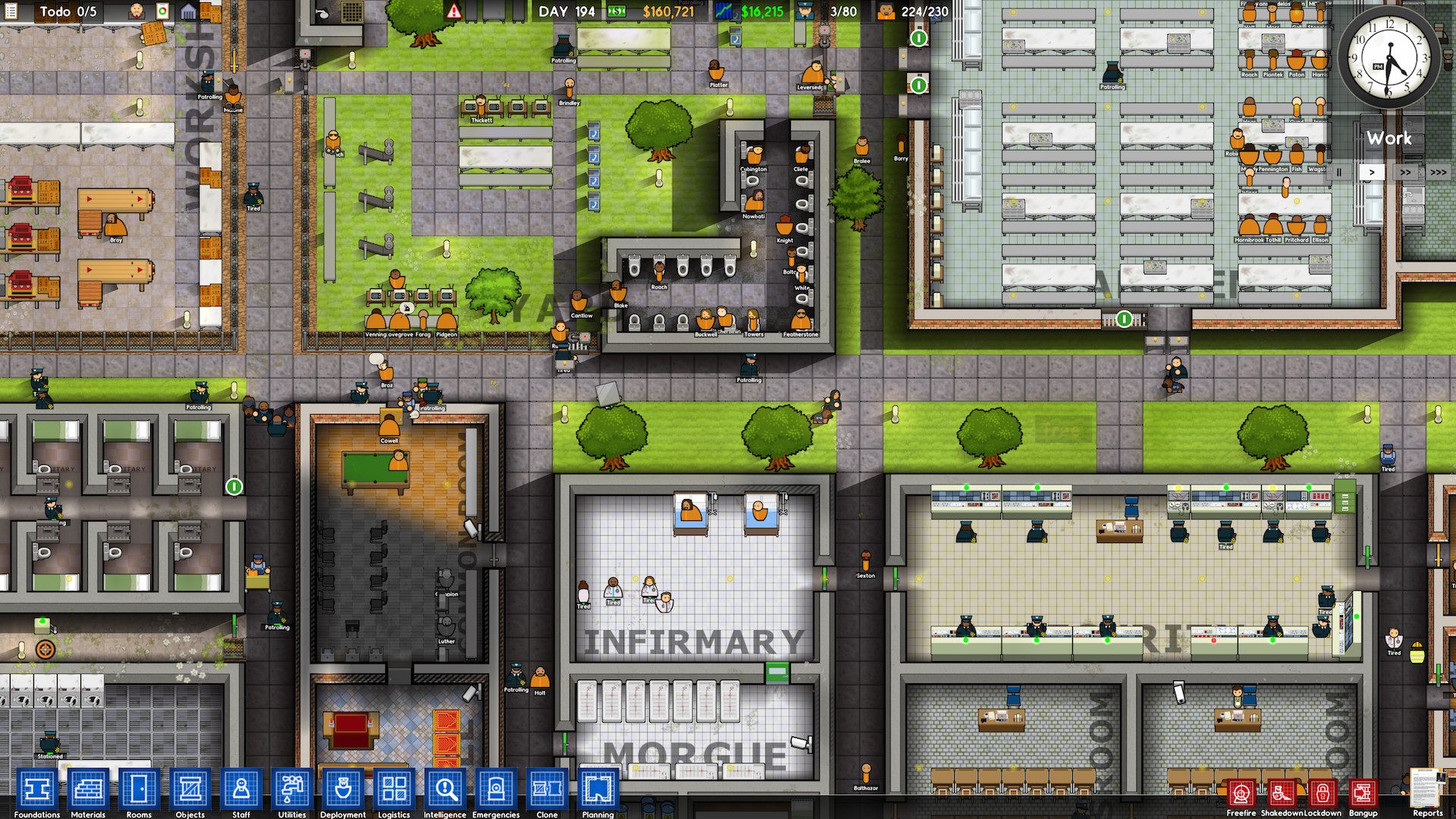 Prison is definitely not fun, but it can be from the comfort of your own home in the form of a video game. If you’ve ever dreamed of mass incarcerating human beings on an industrial level in the most efficient way possible then you’re going to love this game. All jokes aside it is a really infinitely interesting game. There’s a reason why people are so obsessed with all those prison dramas on TV.

In Prison Architect, thankfully, you don’t play the role of a prison inmate. Instead, it is your earnest task to design, build and manage a maximum security facility. Much like many other management strategy games, you’ll have to keep your populace happy or you might lose more than your money. Prisons are a savvy bunch and if you do them wrong they’ll riot, revolt and destroy your hard work to rehabilitate the criminals of the world. It’s the sort of game where it’s 5 AM before you know it and only the first rays of sunlight remind you of your job outside of prison warden. Who’d have thought being locked up could offer so much freedom.

Next Up: Stick-figure cowboys, mysterious weaponry and sick beats