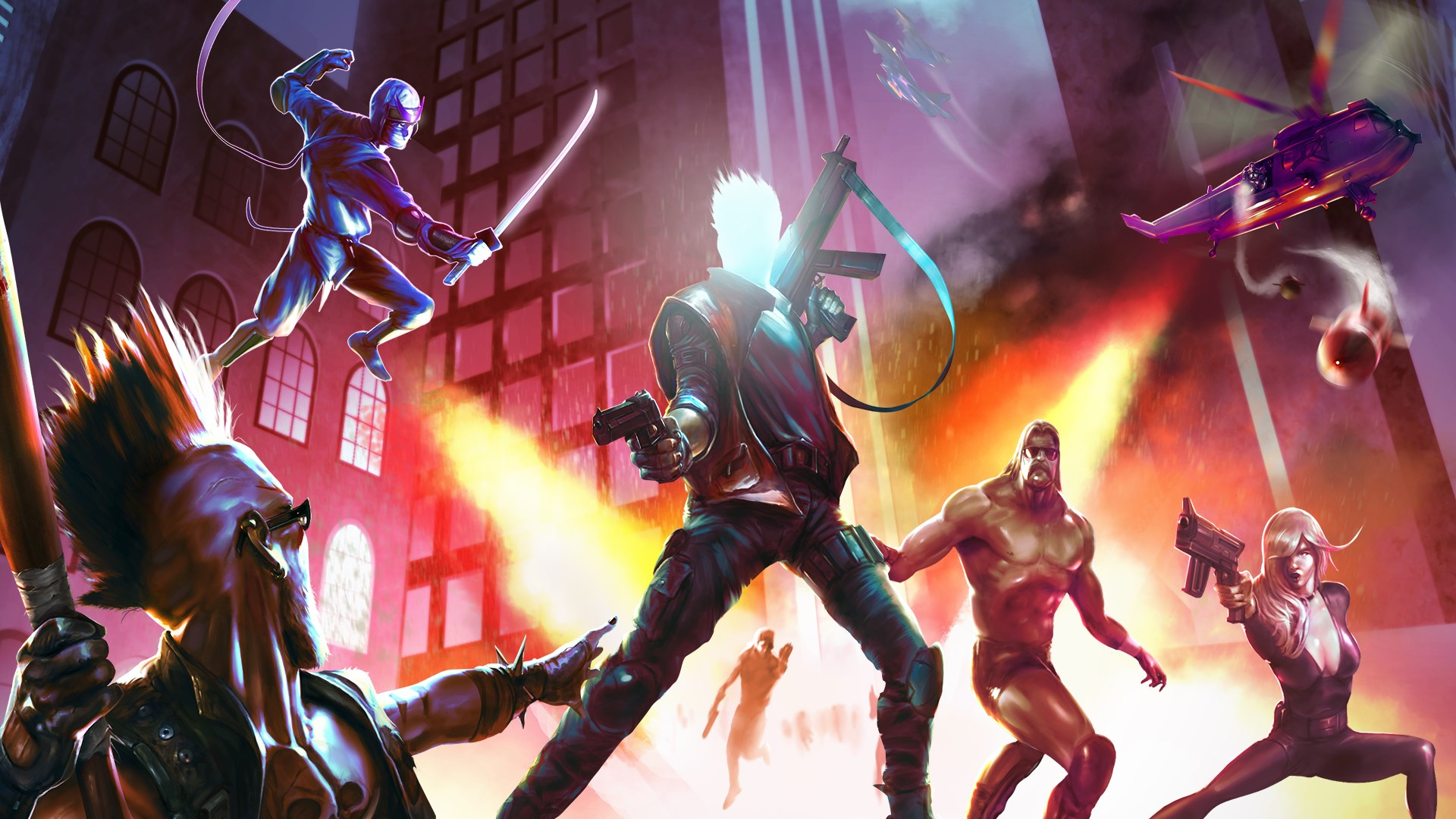 The year is 1980-something. The President of the United States of America addresses the nation through a grainy television broadcast. A deadly alien parasite has invaded, commanding the bodies of anyone it can get its infectious matter on. It could be hiding in absolutely anybody.

This is a call to arms, a plea for a hero to save the country – and maybe the world. But there’s one problem: you’re not a hero. You’re the parasite. 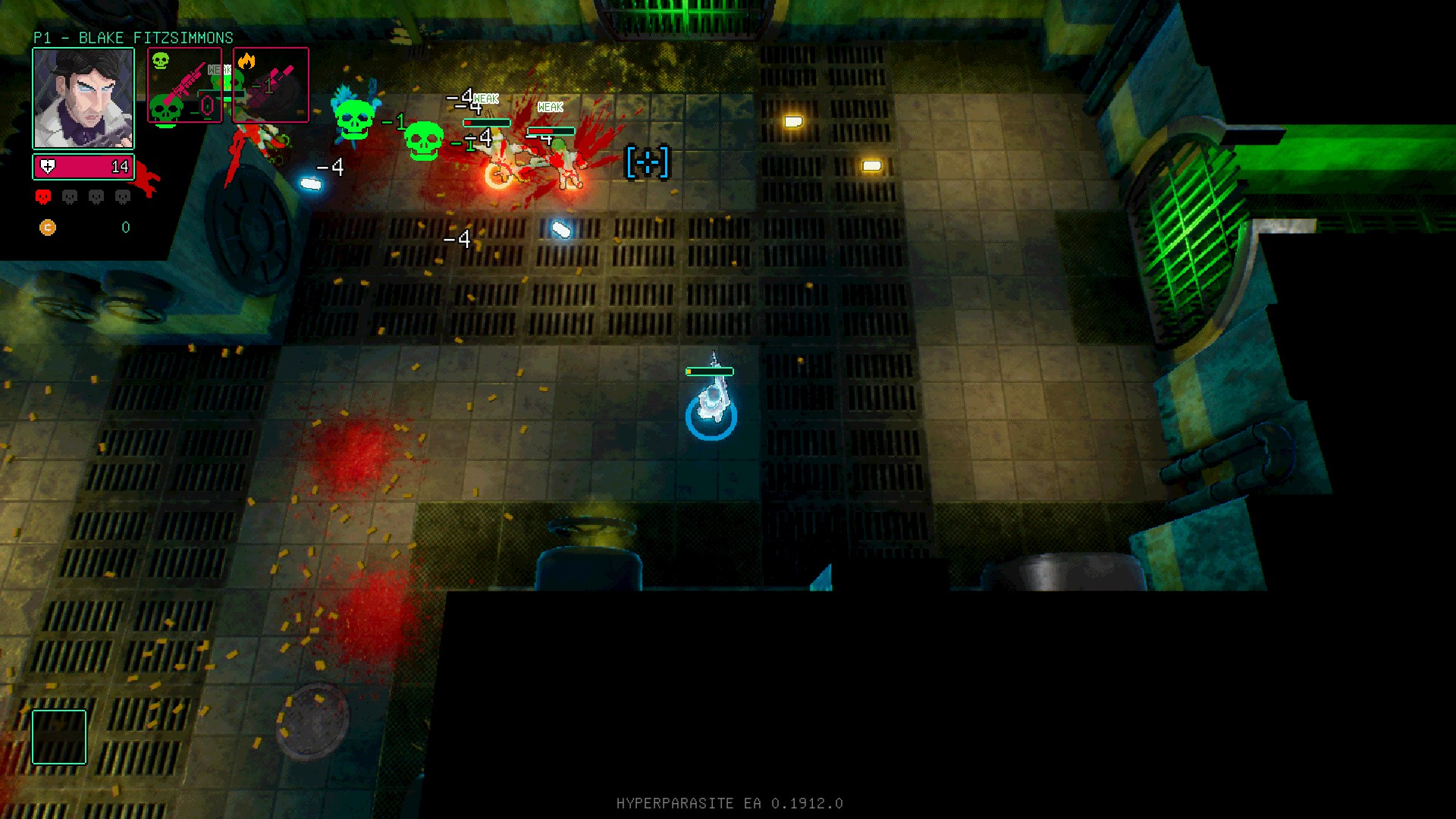 HyperParasite leeches onto a couple of popular gaming bandwagons of recent years: twin-stick shooter rogue-lites and 80s sci-fi stylings. It’s the titular parasite mechanic which sets its apart from the rest. As the parasite, a purplish tentacled amoeba, you’re weak and die in one hit. Infect a host body, however, and you inherit their stats and weapons until they’re killed – at which point you can jump into another. Get killed while you’re just in parasite form, and your run is over.

What puts HyperParasite on the lite-r side of rogue is that only one type of human can be possessed to begin with – a hobo with a shopping cart – and all others need to be unlocked for use in subsequent runs. It’s a neat little system: every so often, an enemy will drop their brain on death. Haul it back to a shop, and it’ll be stored in a vault in which you can deposit currency to unlock the character permanently. 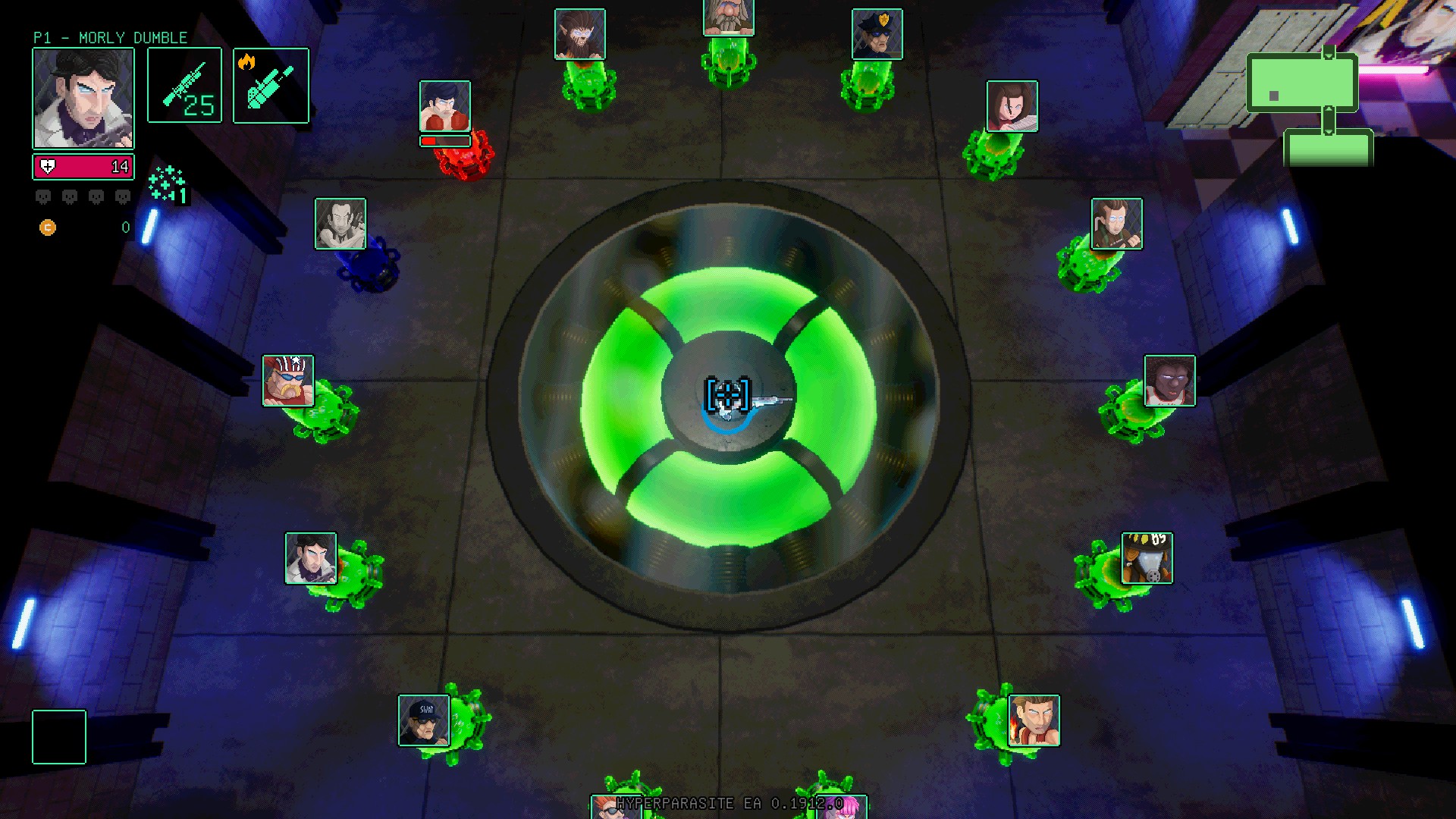 There’s a sizeable range of playable characters to unlock, with the highest number available in the first level – smart, considering you’ll be replaying that one the most. It’s exciting each time you earn a new character and possess them for the first time, taking their abilities for a spin. With melee brawlers, snipers, shotgunners, spray-and-prayers, explosive types and everything in-between, there are playstyles to suit everyone. You’ll just have to find and body-snatch the one you want.

There are downsides to this unlock system, however. Your odds of beating your first few runs are exceedingly slim. While the first level at least gives you the hobo, subsequent stages leave you high and dry – on your first time entering the second area, you won’t be able to possess anyone once your existing character dies, as they’ll all be locked. It’s a glaring oversight to not have at least one character type accessible.

Loot, Loot Everywhere But Not A Drop To Drink 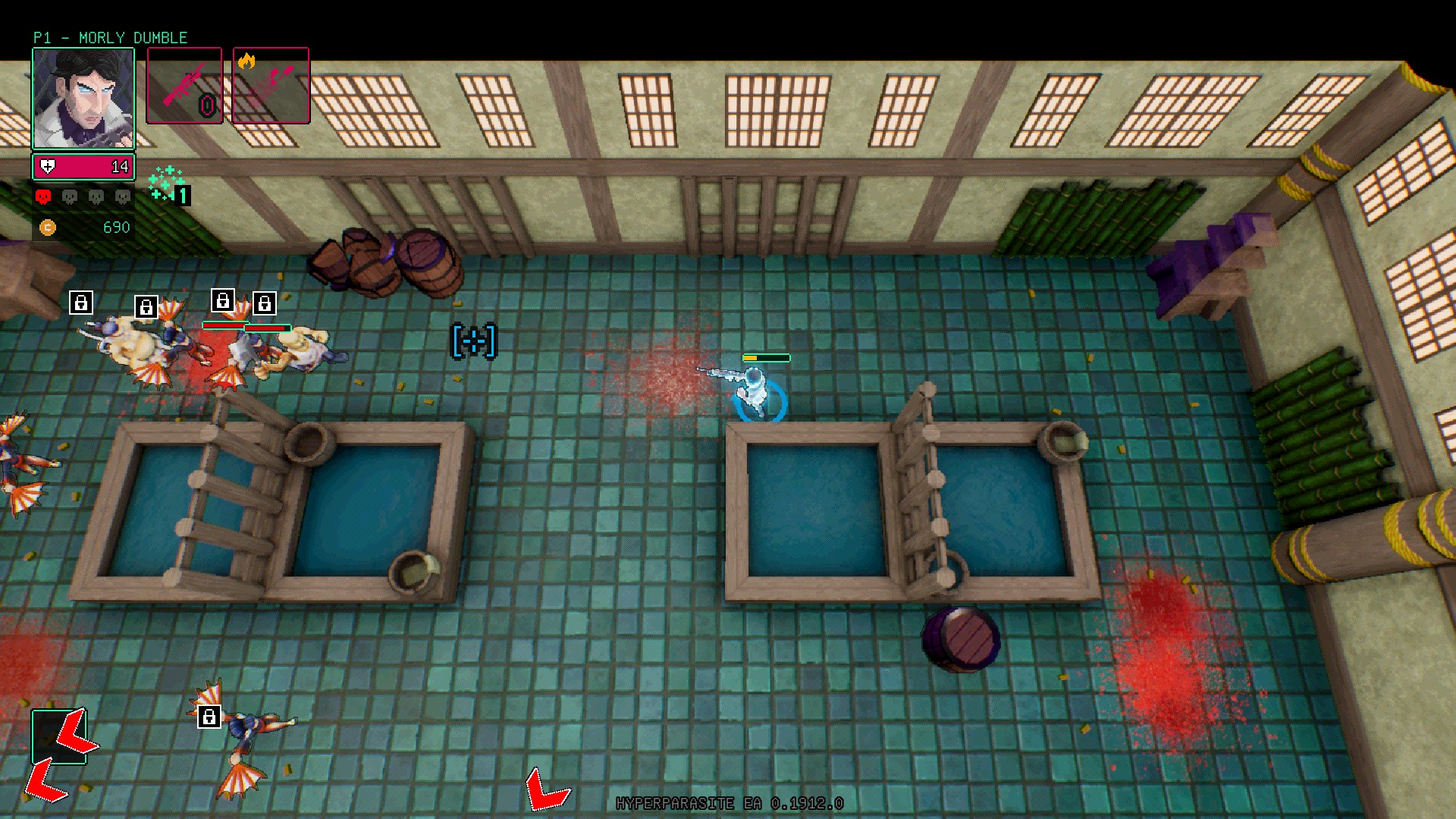 This restriction necessitates a bunch of runs each time you reach a new area just to grind out enough brains and currency. Not having all characters unlocked also puts you at a disadvantage in terms of needing to save your cash for new characters, rather than making yourself more powerful in that run by buying items.

While you can access some upgrades on the field, boosting the stats of your parasite and its host bodies, a shop in each area provides access to consumable items and passive buffs. Items are fairly expensive and single-use, so are arguably not great value – but useful for boss battles, if you can land the area-of-effect attacks on them. What’s a bit of a drag is having to raid every crate, barrel or any other container in each room to ensure you pick up all the money available. 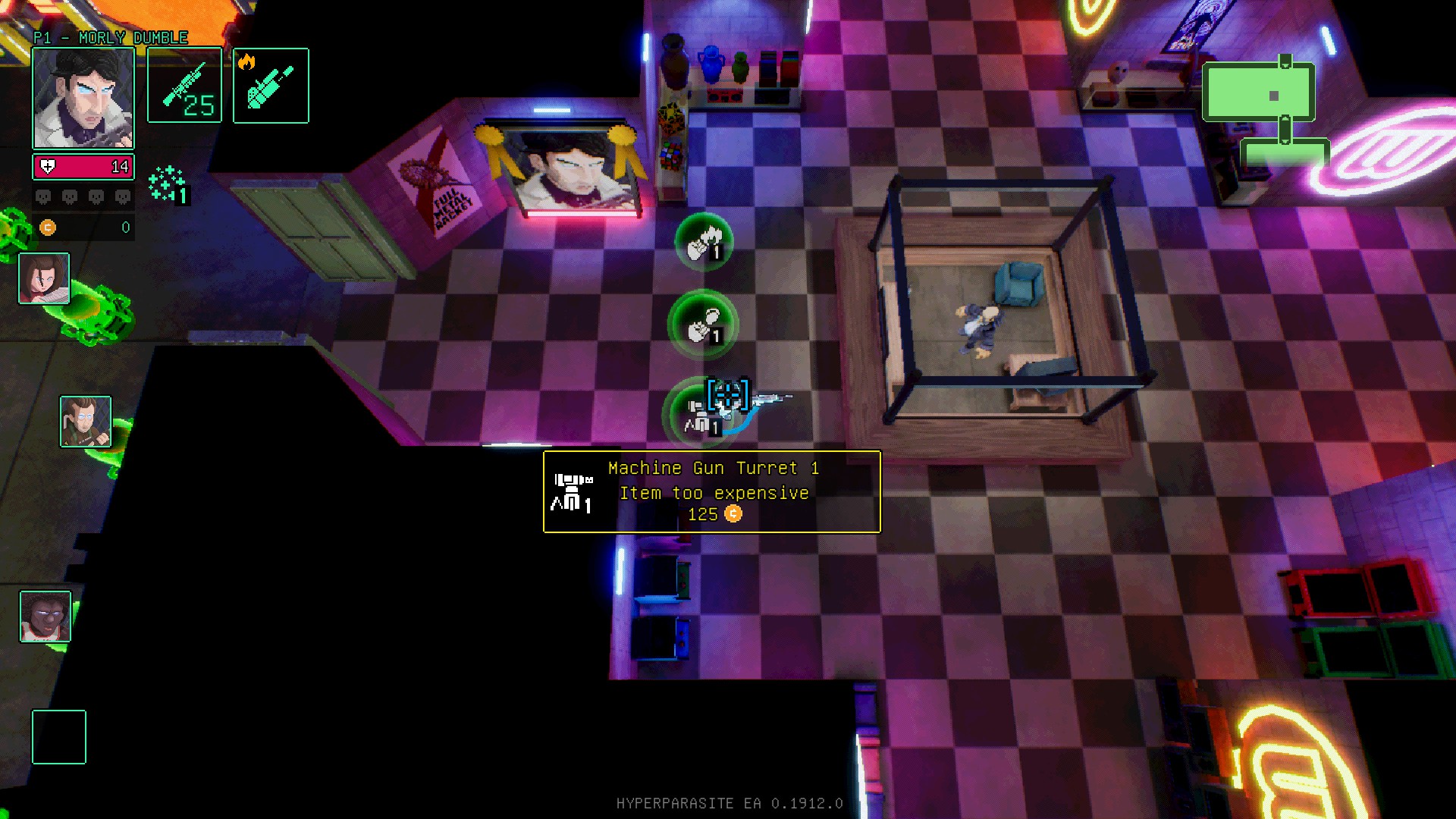 I may have gripes about a few iffy design decisions in HyperParasite, but these are outweighed by a lot of great ones. Enemies telegraph their attacks with a flash, making it entirely possible to avoid all damage if you’re good enough. Even explosions have a nifty expanding radius effect which highlights the exact point they’re about to combust.

Levels have alternate unlockable routes and a variety of room types, from straightforward rush battles to ones with auto sentry guns, enemy fortifications, drone-spawning machines and much more. Even better, there’s unlimited fast travel so you can return to any room in an instant, eliminating the slog of backtracking. Another nice quality-of-life addition is that cash from defeated enemies is magnetised, so you don’t have to pick it all up manually.

What If I Got Inside Your Brain, Just Kidding 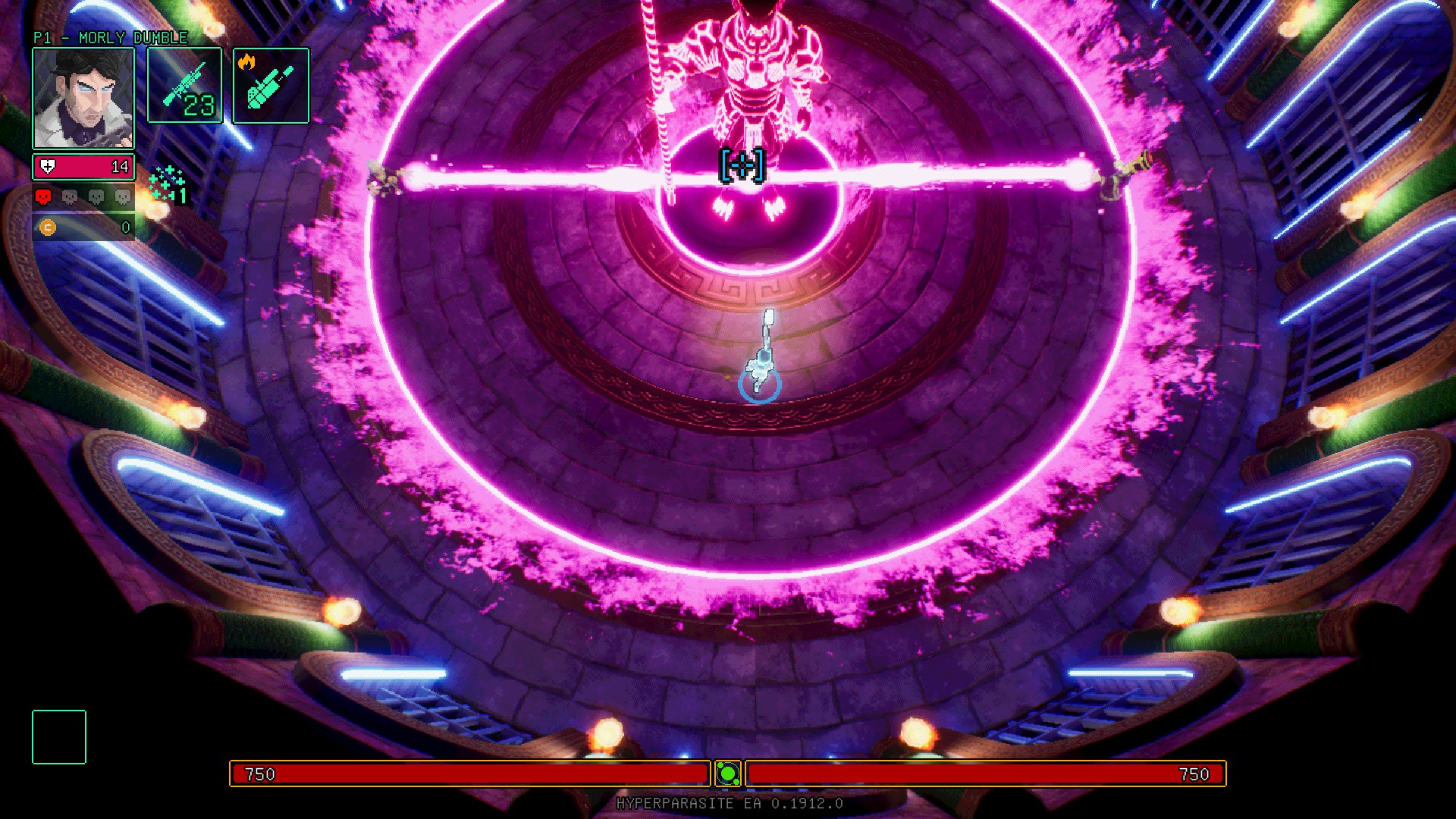 Most importantly, the key feature that the game hinges on – being a parasite – is superb. You can always come back from failure by simply body-snatching a new character (when they’re unlocked, at least). It’s a fascinating precedent for a rogue-lite in which you can die twenty times yet still continue your run – but don’t think that means HyperParasite is easy, because it’s not. On the other hand, if you’re struggling, you can grind enough cash to possess sub-bosses which tip the odds more in your favour.

Obviously, RNG is a serious factor. Even your starting character is random. Sometimes you’ll be blessed with a high-tier character, easier rooms and more powerful items to collect and buy. Other times, Lady Luck will spit in your face. Such is the nature of the rogue-lite. 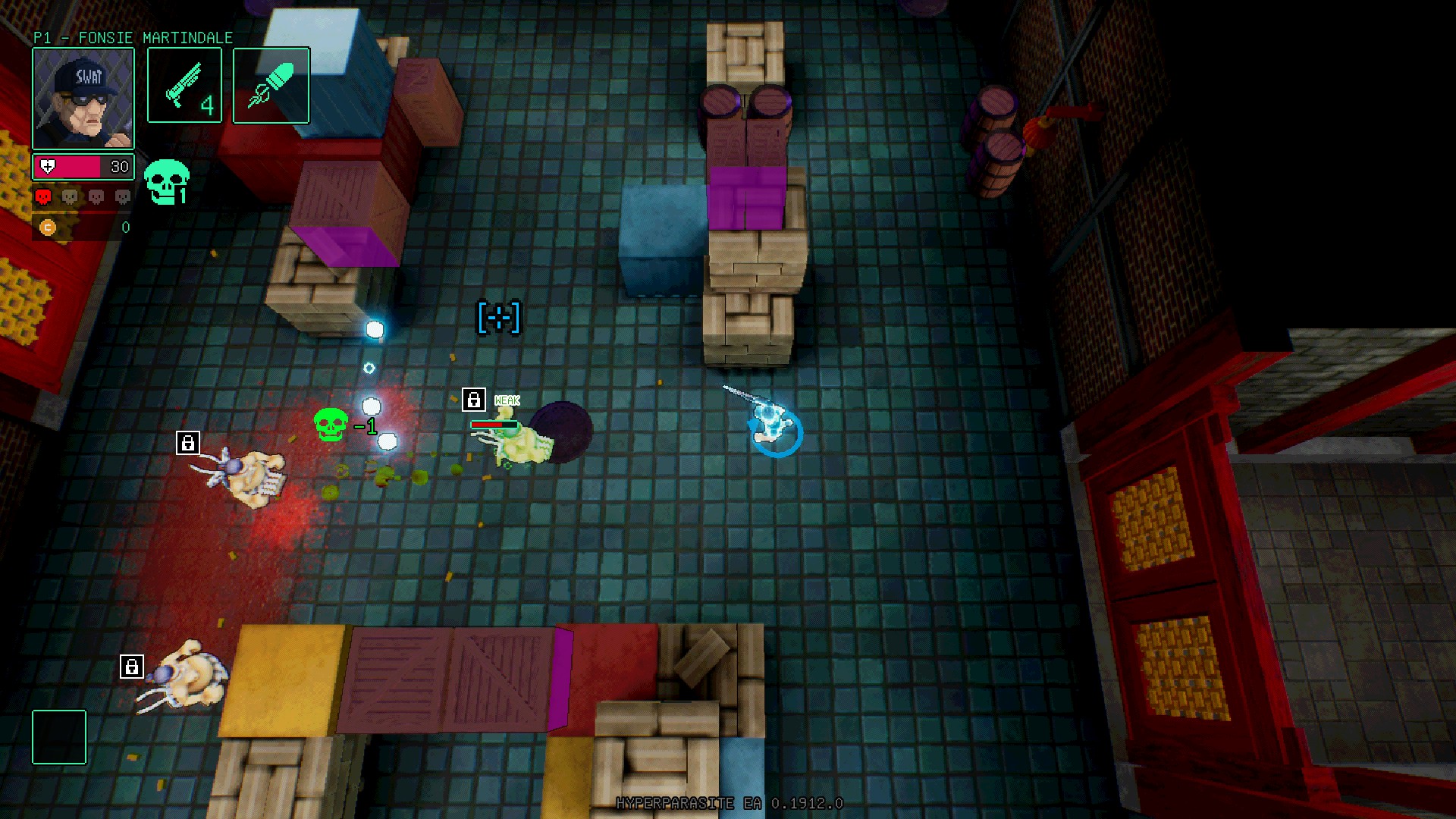 But face defeat, and you can always start again. And in HyperParasite, I found myself compelled to do so more than other rogue-lites I’ve played recently. While its heavy reliance on unlocks may put off the more hardcore rogue fans, it gradually makes the game more beatable over time. And that’s all the hope I needed: next time, maybe next time, I can win.

Review Round Up: Arboria, Huntdown, And Lots Of Dungeons

Wholesome Games Are The Best Thing For Us