Iratus: Lord Of The Dead Review 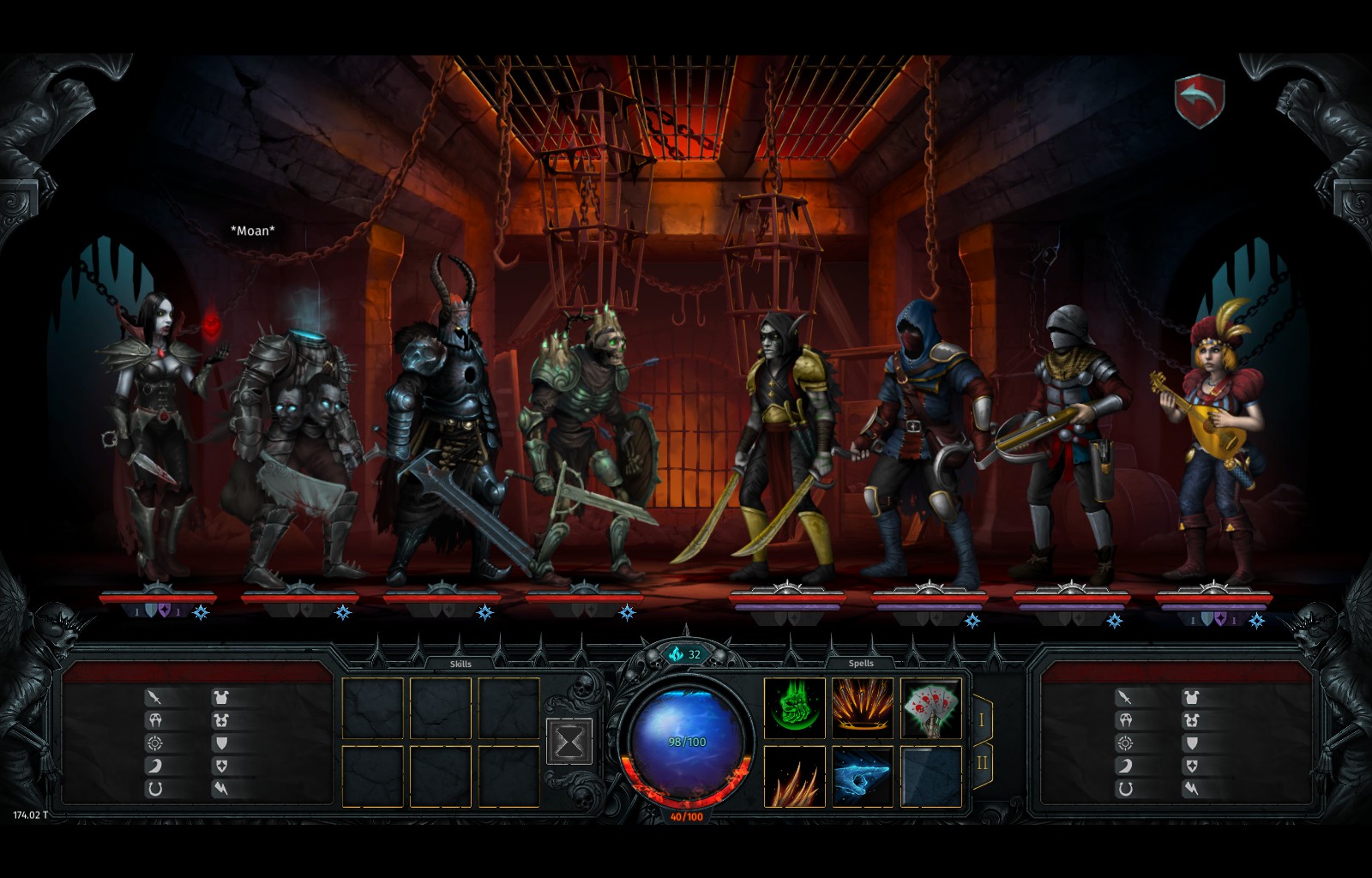 Sometimes a game comes along and makes a little twist on the standard formula by having you take on the role of the villain. It’s rare that this format works for the entire game, as being evil is most fun when it’s an option you can take when feeling frustrated or mischievous, Iratus: Lord of the Dead taps into what makes a good villain-game work: the rest of the world feeling just as absent of kindness.

Iratus is a pretty standard villain, a necromancer who was stricken down by a league of heroes over a thousand years ago. He’s been entombed deep beneath the holiest place in all of the lands during that time, and while he has been unable to grow an army, he’s certainly grown very bored. The living hasn’t exactly been working on their manner and society though, there’s slavery, bandits, warlords and a particularly sinister school of sorcerers up there, and nobody is being nice to each other. 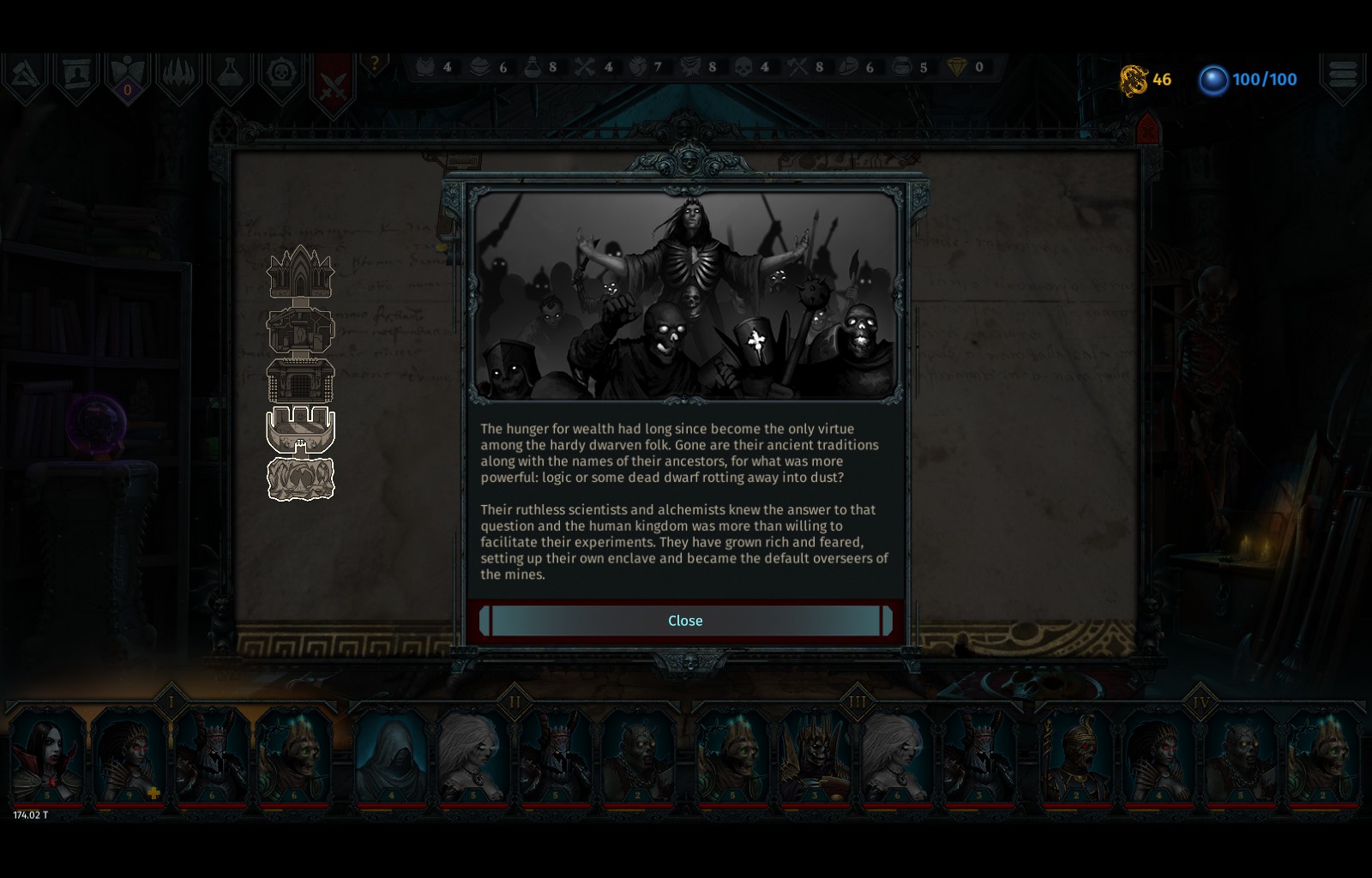 In fact, the only person with a sense of humour in the entire game is Iratus himself, who occasionally chitters a throwaway pun as he chips into combat with magic to help his minions.

In Iratus: Lord of the Dead, you take on the role of Iratus, but the character has no direct role in the combat beyond the odd spell. The combat, which makes up the bulk of the gameplay, will look familiar to fans of Darkest Dungeon and Deep Sky Derelicts: two parties of combatants each line up to either side of the screen centre and fight until one remains — the elusive ‘Angry People Queuing for the Toilet’ camera angle.

You’ll actually have a fair degree of control over your minion roster as you progress through the campaign. That’s handy because it’s quite a long campaign, one made up of five extensive sections each themed with its own events, enemies and backdrops. 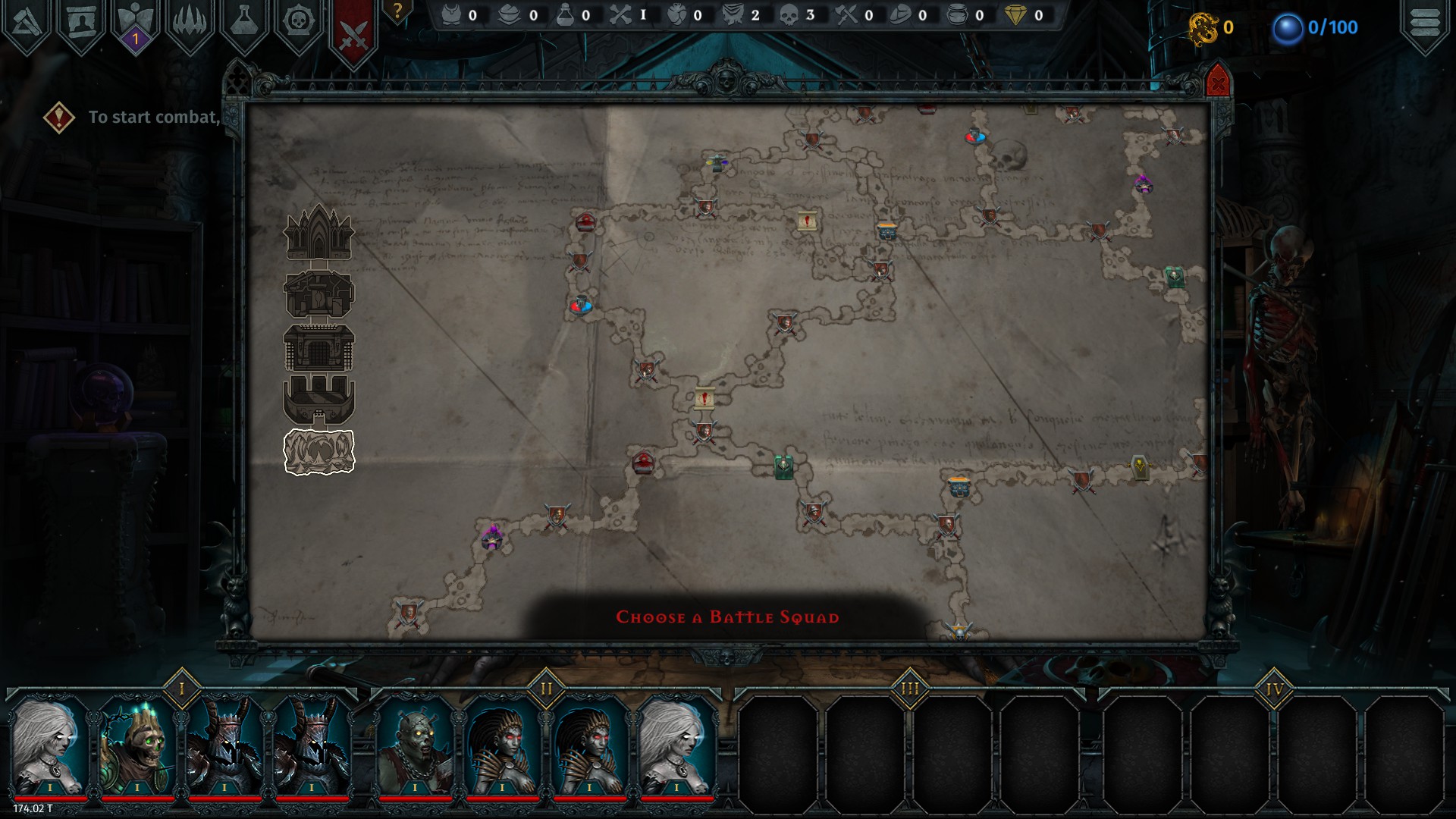 Each combat will see you sending forward a battle squad of four, from your up-to 16 minions. As such, composition is very important, handily you can choose which of them you summon into your fold. You do start with only a handful to choose from, although by the time you’ve finished your first run-through it requires a real effort in order to have not unlocked the vast majority of them.

Group make-up is important because combat is, among other things, based around two types of damage – physical and sanity. Most enemies have a health bar and a sanity bar — some constructs lack the latter — and you can kill them by fully draining either of those two bars. It goes without saying then that having a mix of sanity draining minions (like the Banshee) and health/vigour draining like the Dhampir is a little bit silly. As well as this, each minion’s abilities can only work if they – and their targetted enemy – are in the right position on the battlefield. As such, between the 18 unit types which are ultimately available, there’s a lot of things to consider before fielding a team.

Tweak it until it works 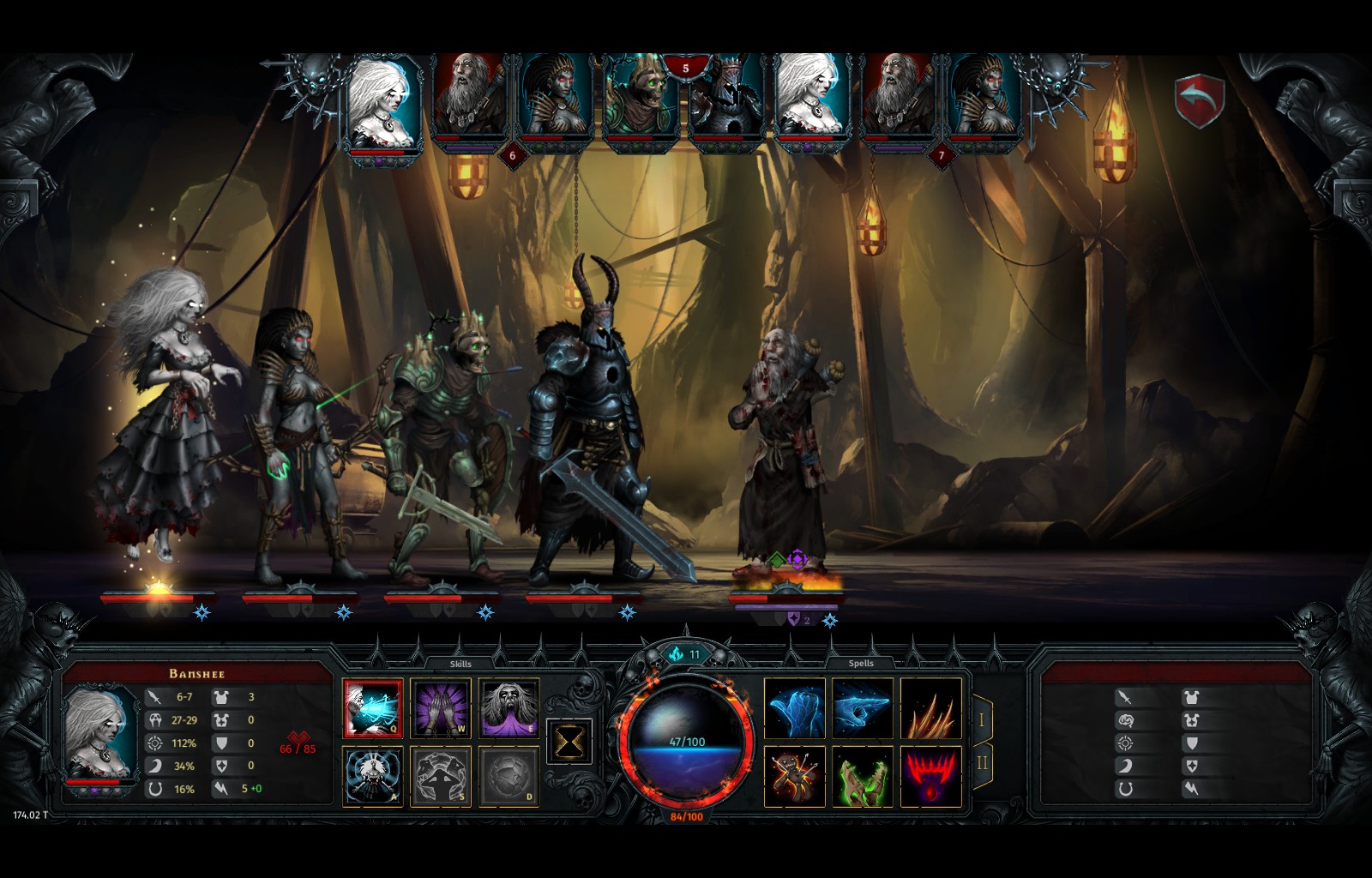 In addition to the above, there is a couple of well-implemented RPG-style elements at play. Each minion is made from four items and has its own experience and level. They can have their components swapped in and out to give them extra skill points, and you can even give them a higher level brain to push them through the levelling up process quicker. Each of their six abilities can be tweaked, and they have stats which can be levelled up with points gained. Iratus also gains levels over time, with each one rewarding talent points which can be spent unlocking abilities, boons and spells. Iratus can also equip certain items and loot (as can minions, but to a lesser ability) which offer various boons to the campaign.

Finally, there’s also the Graveyard, where you can spend your workers to restore and rebuild eight buildings which can increase the rewards you get for fights as well as do other, more direct things like healing or training units while you have other squads off in battle. 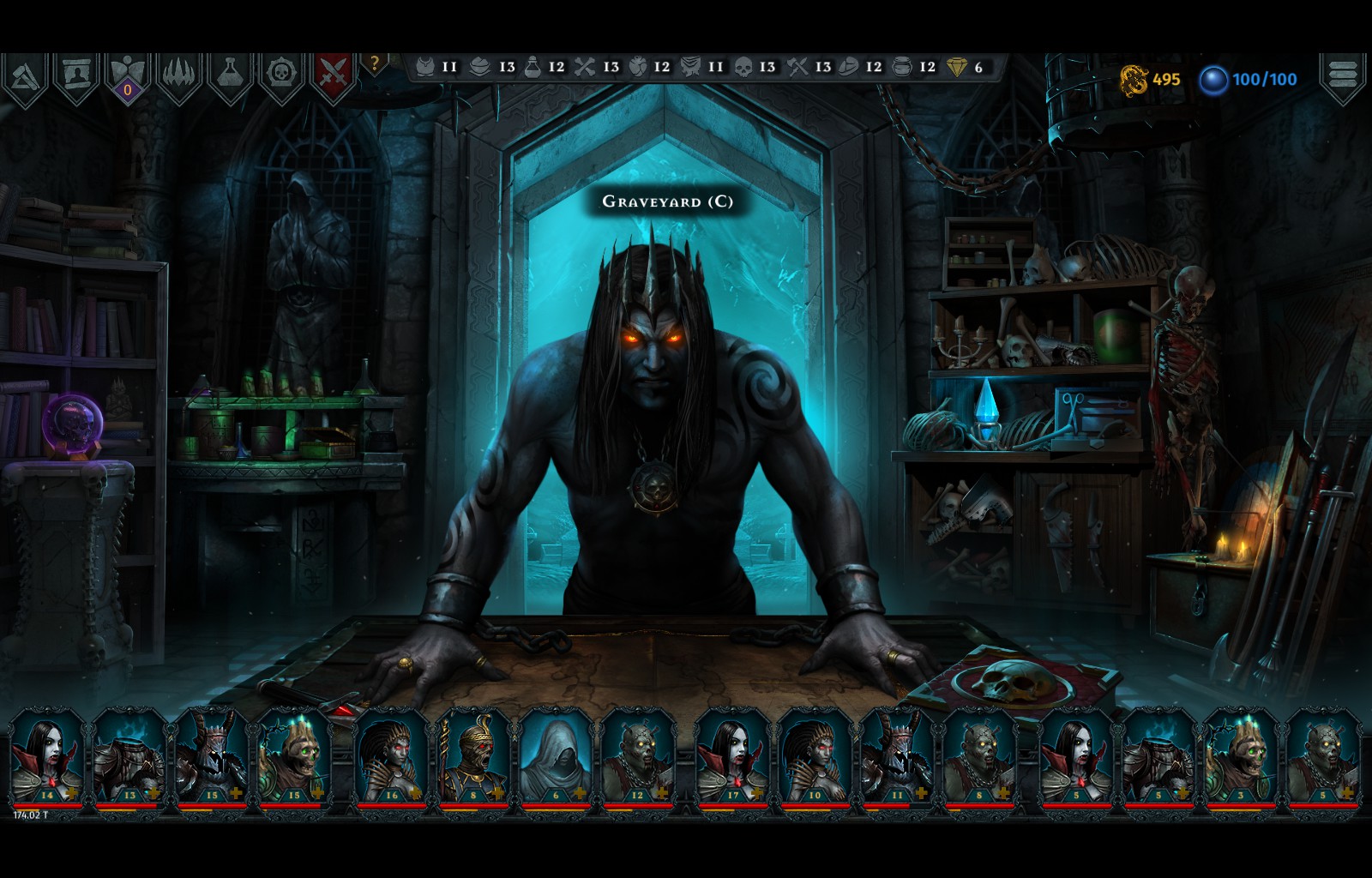 All in all, Unfrozen have done a great job in padding out what could have just been a sequence of battles. There’s a lot of stuff going on, and – as with any map-crawling roguelike – tension and trepidation really ramp up when you come up against an area boss or come across a new enemy. Losing a troop does really hurt, but things like being able to implant new brains mean that it’s not too large a setback, and that’s handy because the campaign is actually really quite long, albeit well-paced. From smashing miners through to beating up zealots, combat changes and evolves throughout the campaign at a pace so gradual that it seems odd when you hit a bump.

While a lot of people will look at Iratus: Lord of the Dead as a pretender to Darkest Dungeon, it does a lot of very cool things, and – at time of review – is incredibly well balanced as a result of its time in Early Access. There’s a little bit of a learning curve for those new to the genre, but those experienced in this kind of game will feel more than at home.