Somewhere in the recesses of 11 Pen Plaza, New York, inside AMC networks is an office littered with pictures of Norman Reedus’ face. Andrew Lincolns desiccated body hangs limply from a chair; the life force sucked dry. A dart thuds into the wall. Then another. A meek-looking executive producer runs forward to retrieve the darts and the papers pinned underneath while another sticks up new notes to replace the old.

“The Walking Dead’s… American… Cross Country?” The executive producer reads aloud pulling the pierced sticky notes from the darts before placing them into the open palm of his blindfolded boss. “That’s just Hideo Kojima’s ‘Death Stranding’,” comes the reply before hurling the darts back towards the opposite wall. A producer ducks, inches from being struck by the sharp flechettes before huddling to retrieve them once again.

“The Walking Dead’s… Environmental… Walking Simulator?” The suggestion is timidly posed, poised for the expected erratic response. “ ‘Death Stranding’, again.” The blindfolded person retorts before flicking the projectiles back towards the wall.

“The Walking Dead’s… Baby… Management Game?” The executive producer announces, praying for a swift death. “Are you serious?!” erupts the blind figure. “How are all of these just ‘Death Stranding’?” The darts sail once more towards their yellow marks.

“The Walking Dead’s… uhh.. Bridge Constructor?” The blindfolded figure raises a hand to their temple in frustration, stroking their fingers across their forehead. “Do I even have to say it?” they ask through gritted teeth. A knock comes at the door. “10 minutes before the pitch consultation sir,” a secretary informs. Silence fills the room.

“Bugger it. Call Clockstone and let’s pray Hideo Kojima never works it out.”

Despite it being quite the obvious cash-in that AMC continues to roll out on the still-living corpse that is The Walking Dead series, there are still a few good points to yet another bridge builder from Clockstone and publisher Headup. Let’s look at the good, the bad and the weird of it all. 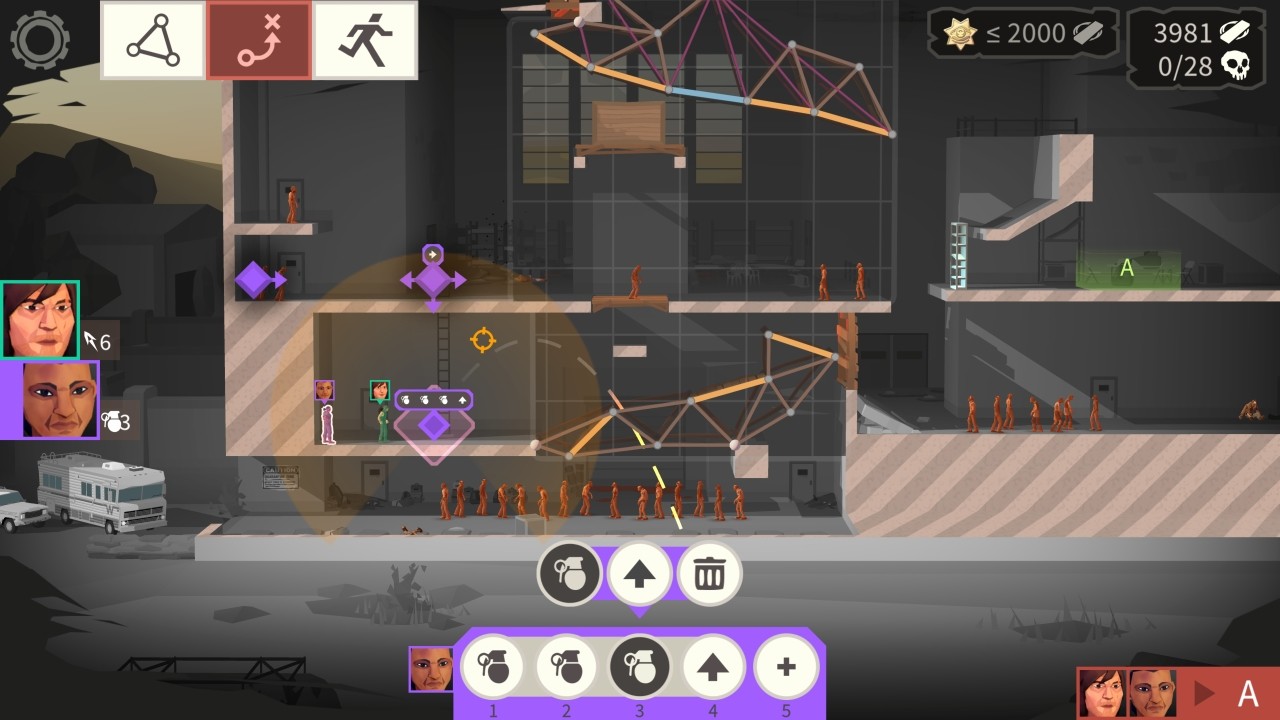 Gameplay follows simple advancement and should be reasonable to those new and old to Bridge Constructor games. Essentially each level is a physics puzzle that builds on the last concepts you learnt, to progress a rather pointless story.

Following on from the last game in the series (Portal) some new mechanics keep the game fresh and interesting. Anyone familiar with the series will feel at home, but the added challenge of team management and timing is interesting and keeps the gameplay from being stale. A good example of this is having to drop crates using one of your characters who can then shoot the explosive barrels you have catapulted into the air to break a wall, allowing your stunt car to drive through and smash another wall for you to progress. You slowly build-up to this rube goldberg like event through trial and error, and when you finally get it to work, it’s very satisfying. No longer are you just driving cars across bridges that you slapped together from sheer force of will. 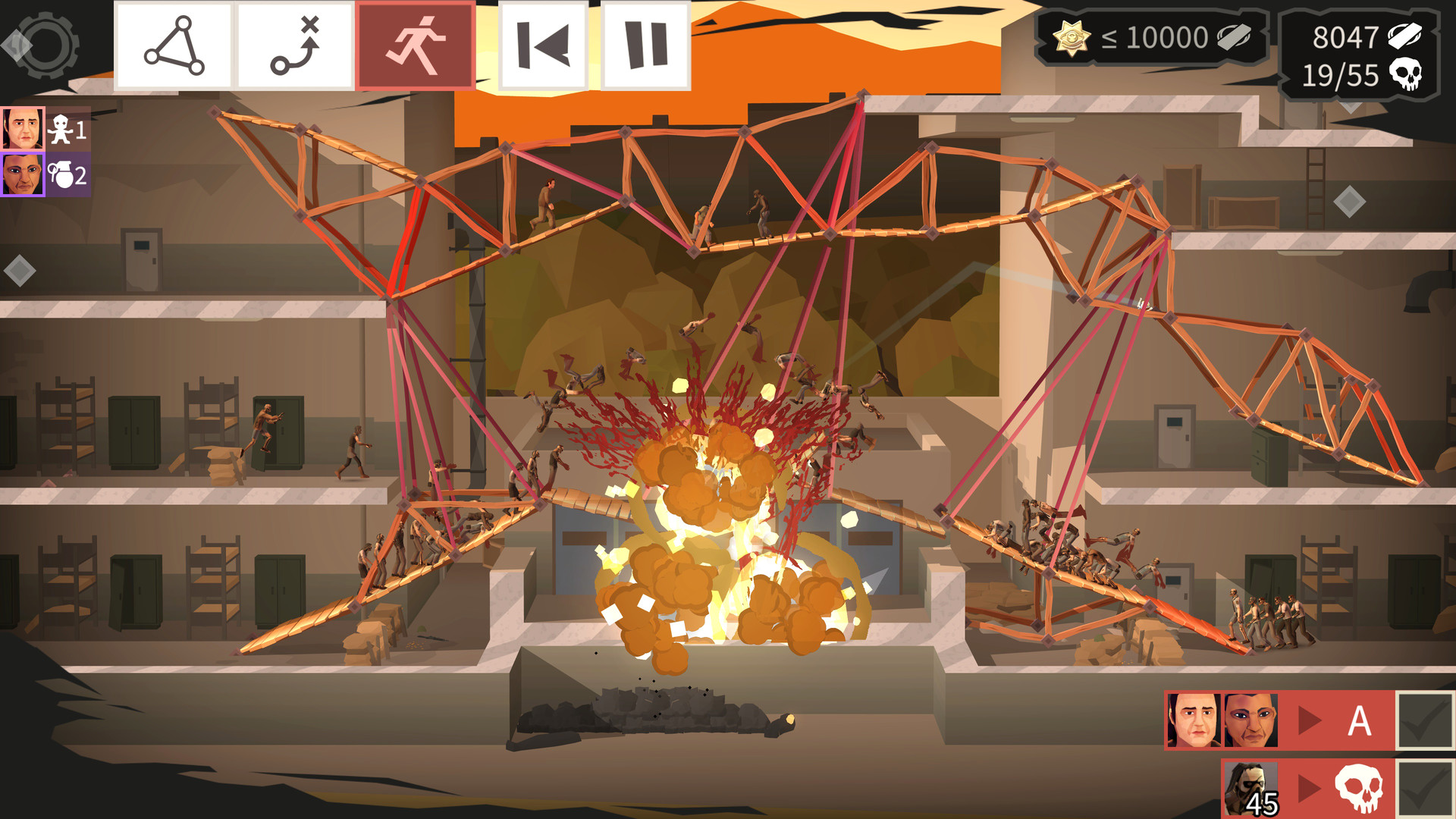 Sadly there are quite a few issues outside of the core gameplay. For a tie in-game, the dialogue is frankly god awful. With the Portal Bridge Constructor, Glados’ writing and humour managed to match the tone of the originals. A stark contrast to the attempt here. Eugine’s ‘clever’ dialogue is dialled up to 11 and goes well beyond cringe bad, to the point that I began skipping all the cutscenes entirely. That is not to say the other voices in the game are any better, just that Eugine’s were excruciatingly painful to read. The plot thankfully is irrelevant anyway, but if you want to play the game as a Walking Dead fan, I give fair warning that it’s a far cry from Robert Kirkman’s voice.

The music is unfortunately just as dreadful, and by around the 4th to 5th mission, I found myself turning it off to replace it with something from my own curation. This comes as somewhat of a surprise as previous instalments had good ambient background music. That, combined with most game sounds being very generic zombie grunts or car crash noises gives little to be liked in the audio department.

Finally, for some reason, all Walking Dead games have to follow the Telltale cell-shaded look. It worked well in the main series and helped distinguish the game as unique. Here it feels lazy and cloned. Something else could have been done to make this more distinctive, perhaps follow the comic book art style or go more naturalistic. Instead, we have a faux 3d cell-shaded game that looks fine but feels like a cheap attempt to capture some of that Telltale Walking Dead nostalgia. 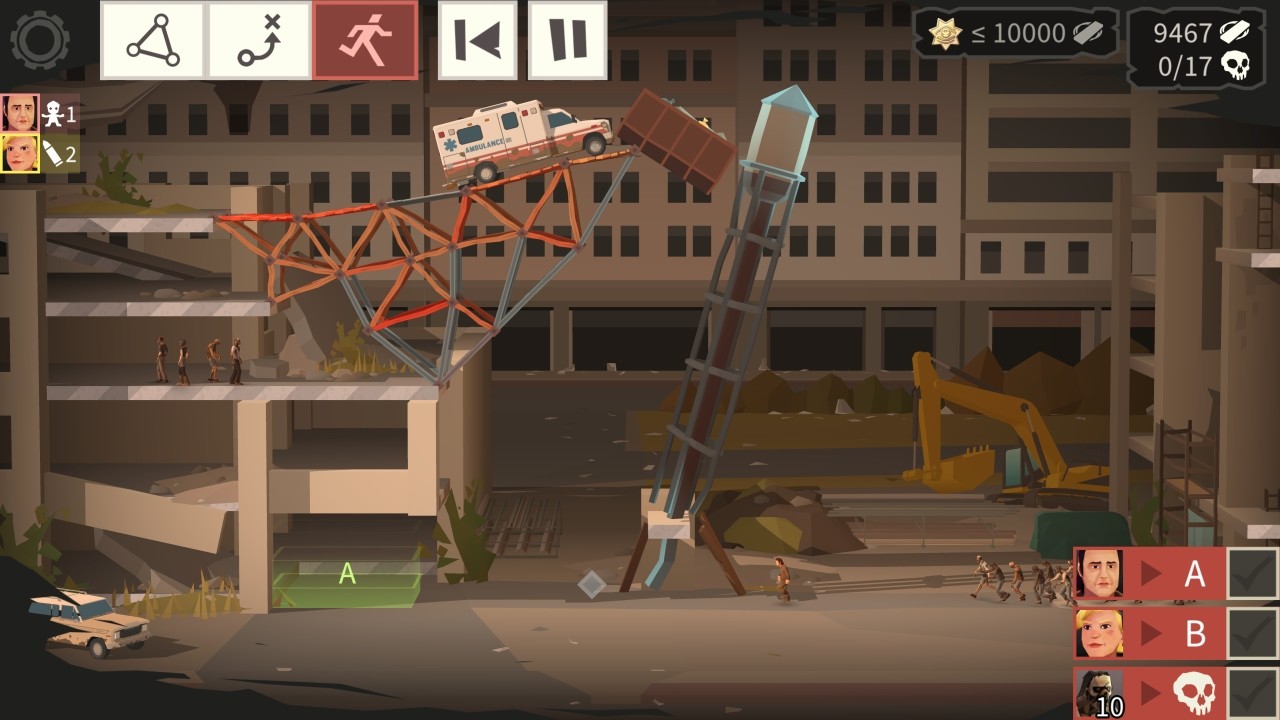 Who is this game for? Genuinely, I have asked myself this question a number of times, and I cannot put my finger on it. It seems to fall into one single category – Walking Dead enthusiasts. It is no secret that AMC is trying to bleed their cash cow dry with the recent Magic the Gathering tie in and launch of yet another spin-off series, so I guess why not a bridge puzzle game. It’s as good as any. The joke here is this caters a lot more towards Bridge Constructor fans as the gameplay core is still very good. But people hoping for some Walking Dead lore or exploration of the world will probably end up sorely disappointed. It is probably worth mentioning that I have no idea if any of this game falls into the Walking Dead canon. The comics and main games are supposed to represent the ‘true’ canon, but Norman Reedus doesn’t appear in those. So is this canon to the TV series? Who even knows.

If you have missed flinging innocent people across shaky bridges for dubious reasons, this addition to the Bridge Constructor series is well worth the entry price with a lot of fun puzzles to be completed. However it doesn’t feel as good as its predecessors, and if you are yet to play those, perhaps try Bridge Constructor Portal first to see how you get on. If you are a Walking Dead enthusiast, this probably isn’t for you, despite the guise it hides under.

It really makes you feel like Spider-Man if Spider-Man were a slowly decaying husk of Norman Reedus with a crossbow.