The Illuminati. Roswell. Look closely, and you’ll quickly discover conspiracy theories lurking amongst any populace, entrenching themselves as clandestine community mythologies. Once the territory of airport paperbacks or adventure B-movies, the (mis)information petri dish of the Internet has elevated ludicrous conspiracies into the mainstream.

Tim Sheinman’s latest detective title – following on from similar sleuthers Family and Rivals – tackles the online love affair with conspiracies headfirst, throwing the player into a fictional (we hope) plot against the 2020 presidential election.

Timely to the second, Conspiracy! isn’t attempting to validate swirling false claims around electoral interference, but instead focuses on how effortlessly the germ of a conspiracy is planted, and how a digital infrastructure harnesses its potential to dangerous ends. 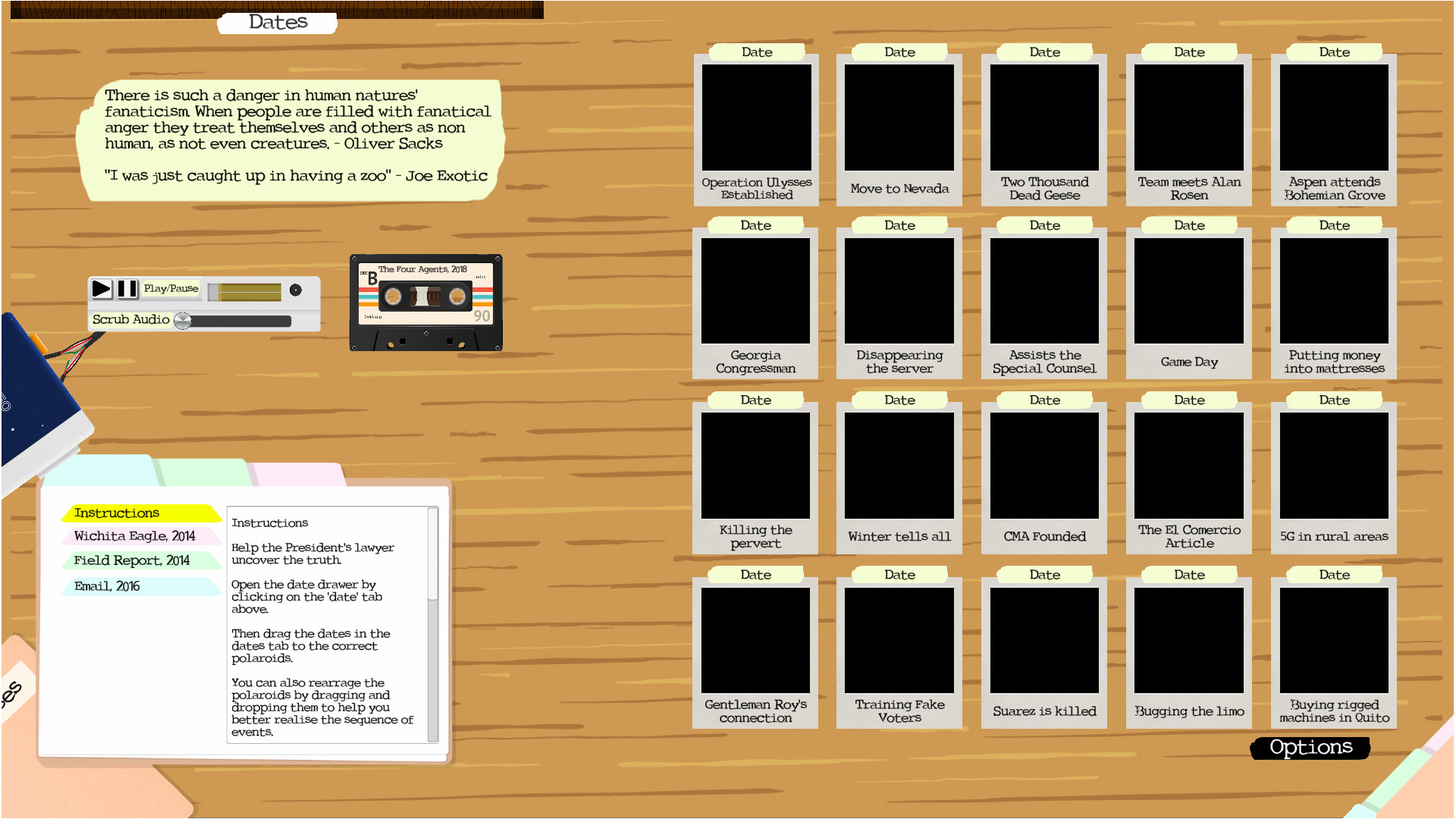 Anyone experienced with Sheinman’s prior titles will feel right at home with Conspiracy’s minimalist interface, although newcomers are amply catered for thanks to prominent and clear instructions. As the President’s lawyer, players are tasked with unravelling a deep state conspiracy utilising both written documents and recovered tapes as evidence.

An assortment of polaroids signifies major events in the timeline whilst offering hints towards the focus of your investigation. A polaroid with the label ‘Two Thousand Dead Geese’ might seem outrageously irrelevant at first, but it also redirects your attention towards any and all hidden geese references scattered throughout the evidence.

Progression functions similarly to Lucas Pope’s Return of the Obra Dinn. Those aforementioned polaroids must be connected to specific dates (a month and year), but players will only know if they’re correct after five incidents have been successfully matched.

Much like Obra Dinn however, the initial difficulty bump is offset by the sheer satisfaction of completing a group, further enhanced by each polaroid revealing an image of the incident in question. As every polaroid can be interchanged on the grid, it is possible to construct a full visual timeline, bringing the conspiracy into focus. 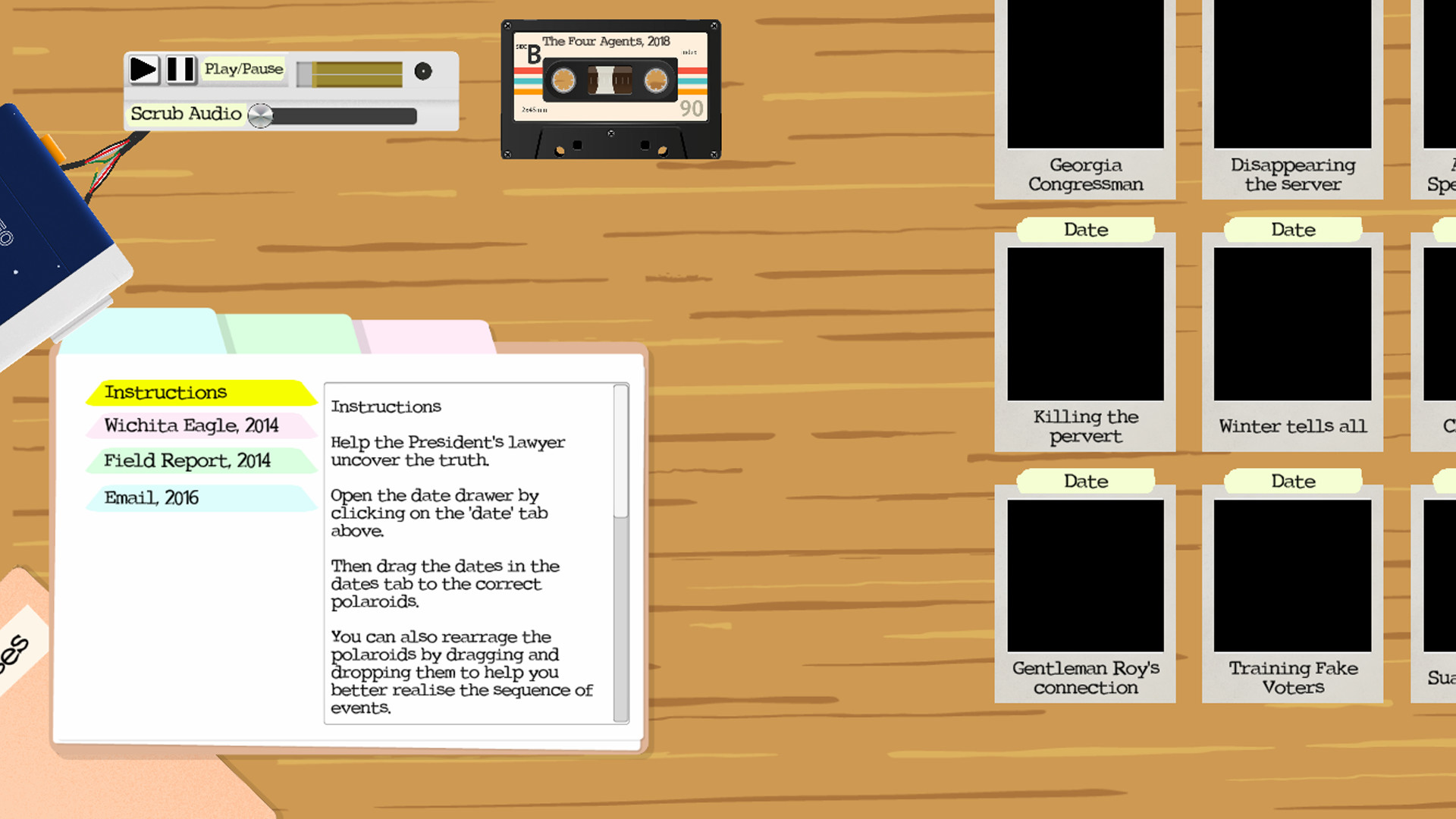 Conspiracy’s boldest design choice, however, lies in its meta-game elements. Without giving away its secrets, the narrative is profusely grounded in reality, with the clues and dates themselves all aligning with real-world events. Certain puzzles require trawling through an actual calendar or searching for someone’s birthday to pinpoint a precise time. These meta elements are novel but crucially play into the devilishly bizarre narrative of deep-state politics and intervention.

Sheinman isn’t content to adopt the aesthetics of prevalent digital conspiracies, but encourages players to engage with the very medium and techniques that produce them in the first place. If anything, Conspiracy would be improved by daring to venture even further down this particular rabbit hole. Finding dates is satisfying but ultimately a limiting structure for puzzle design, with one Google search usually enough to find the desired information. Conspiracy toys with blurring the lines of satire and reality, though never completely capitalises on the messy interweaving networks that cause these conspiracies to snowball into front-page news. 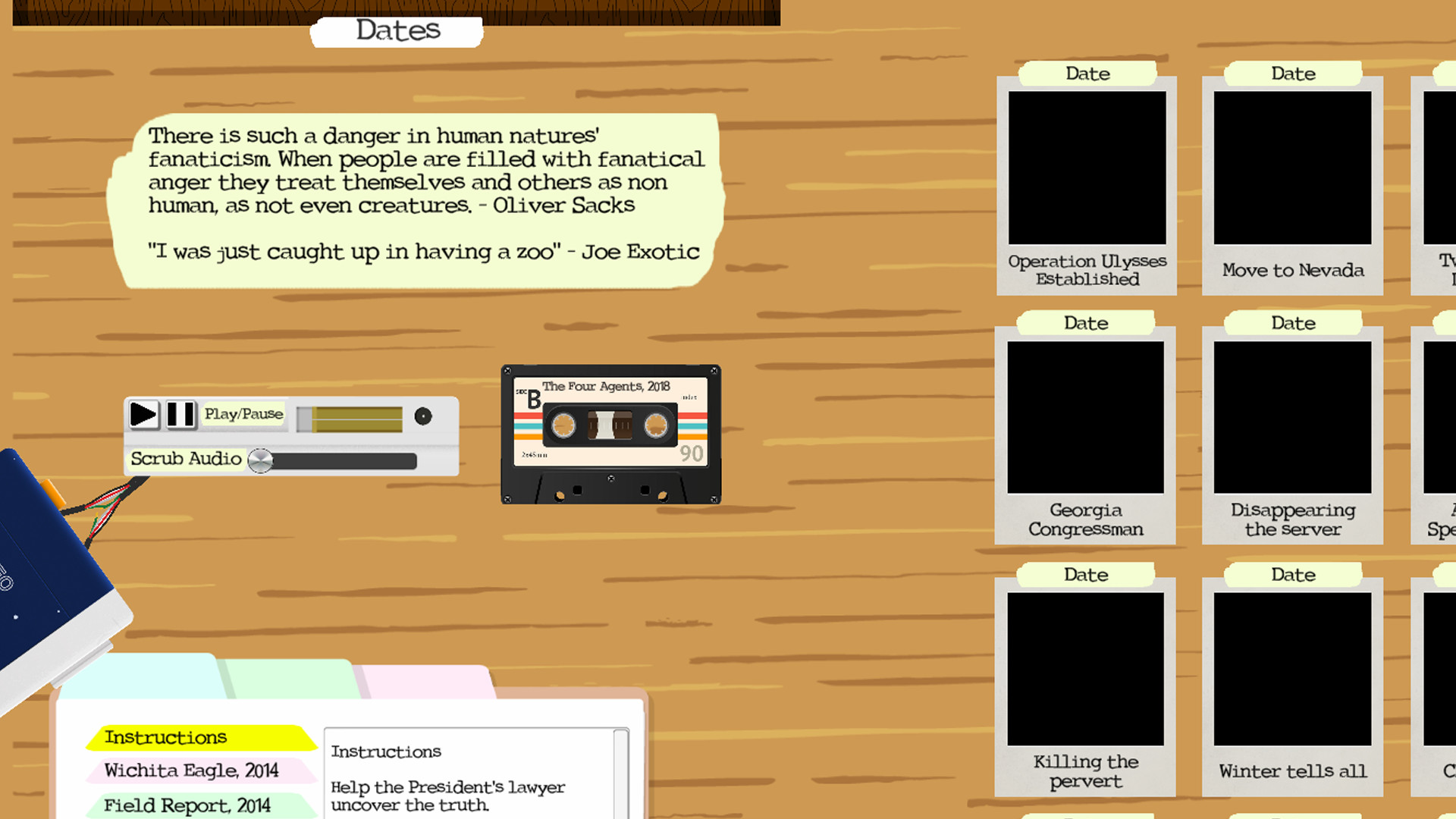 An ensemble of voice actors and personalities help to further illustrate this parallel history, notably including journalist and author Jon Ronson. Given Ronson’s proclivity for unorthodox political exploits, he is a natural fit for the material and blends in perfectly with the surrounding voice cast. As each tape typically features a new narrator, there aren’t any characters who stick around for more than a few minutes.

Funnily enough, the ‘protagonists’ of Conspiracy! are the ones hiding in the shadows of the law, remaining inaudible for the entire duration. Whilst the documents and tapes do an excellent job of constructing an attractive mystique around these phantom agents; their mysterious nature consequently makes them impenetrable. There’s a healthy dose of incredulous revelations around the corner, but no identifiable characters that create real investment. Conspiracy! is by no means attempting to craft a vast tale – I was able to reach the credits in just over an hour – but in contrast to prior titles like Family, there lacks a genuine source of empathy. 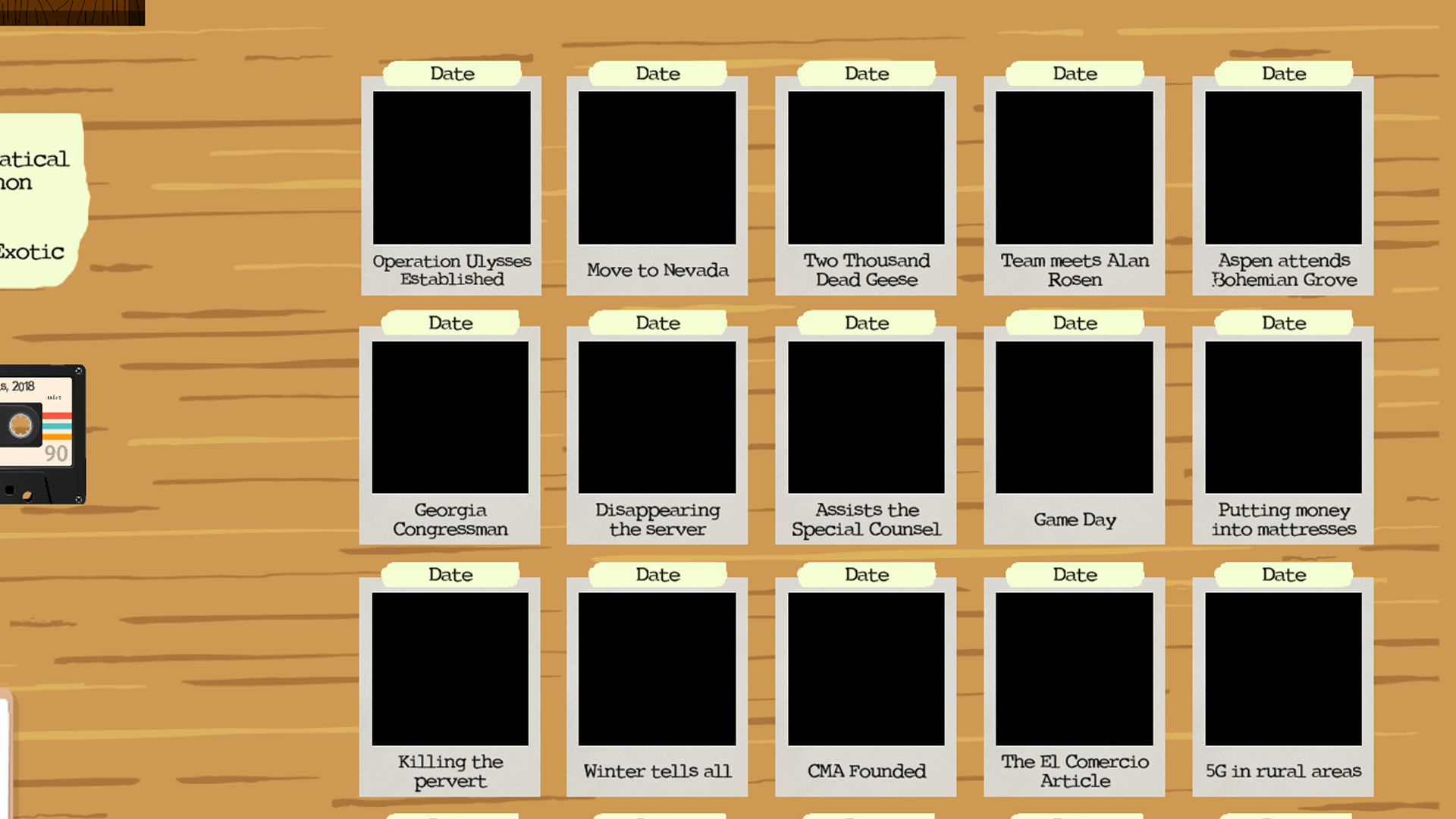 Nonetheless, Conspiracy! concludes as a grimly hilarious and frightening reflection of the contemporary state of its namesake, a mythology mutated into a multitude of nightmarish ideologies. Perhaps its most potent observation in fact lies on its title screen, in which a rant outlining cannibalism in children’s shows Arthur and SpongeBob SquarePants infests the backdrop until consuming it entirely. Whilst the quote itself is nonsensical; the point is startlingly clear.

The distinction between online fan theory and political deep-state operation is absent; the Internet is so omnipresent that anything it shelters automatically assumes its aesthetics. It’s not all that surprising that systems of government feel like children’s cartoons, and its participants are inadvertently eating themselves alive. Conspiracy! probes theorists’ desire for convoluted answers and scheming puppet masters as swooping universal answers, when reality is often plainly straightforward. The truth is these answers are non-existent when the world is, and always has been, a disorganised jumble of events. Now we just need to sort them into some sense of order.