Capitalism is based on systems of exploitation. These take several different forms, but alienated labour is, by far, the most important part of this process. The idea is this: you can get more money from the sale of a commodity than you actually deserve, in terms of your contribution to its production, by claiming it as your personal property. You’re taking what belonged to someone else, who contributed more to the very process of production.

Bear with me for a bit, but let’s say you’re a small business owner who spends an hour daily on the shop floor apart from weekends, while I work 50 hours a week making boots. We make 100 boots a month, which nets us $10,000 at $100 each. You pay me $2,000 and pocket the remaining $8,000, since you purchased the materials needed for the boots. Yet I worked on these for 200 hours, while you only spent 20 hours. The result is that I get ripped off and you get substantially more. As such I’m alienated from my labour, and you get a pile of unearned income.

The developer behind Griftlands, Klei Entertainment, takes capitalism to its logical conclusion by imagining a world in which no alternative to exploitation exists. In short, you have to get them before they get you.

The concept of alienated labor is, in many ways, the key to understanding the story in Griftlands. Everybody is either swindling or being swindled–sometimes both at the same time. There are three playable characters: Sal, Rook and Smith. Sal is a bounty hunter trying to get revenge on the person who sold them into indentured servitude as a child, while Rook is a war veteran hired to prevent workers from rising up in revolution against a robber baron. Then there’s Smith, a black sheep who gets cut out of their inheritance by their siblings after the death of their wealthy parents. You can shape the story through some of your decisions, but the overall theme is the same no matter which path you choose to take.

Exploit or be exploited 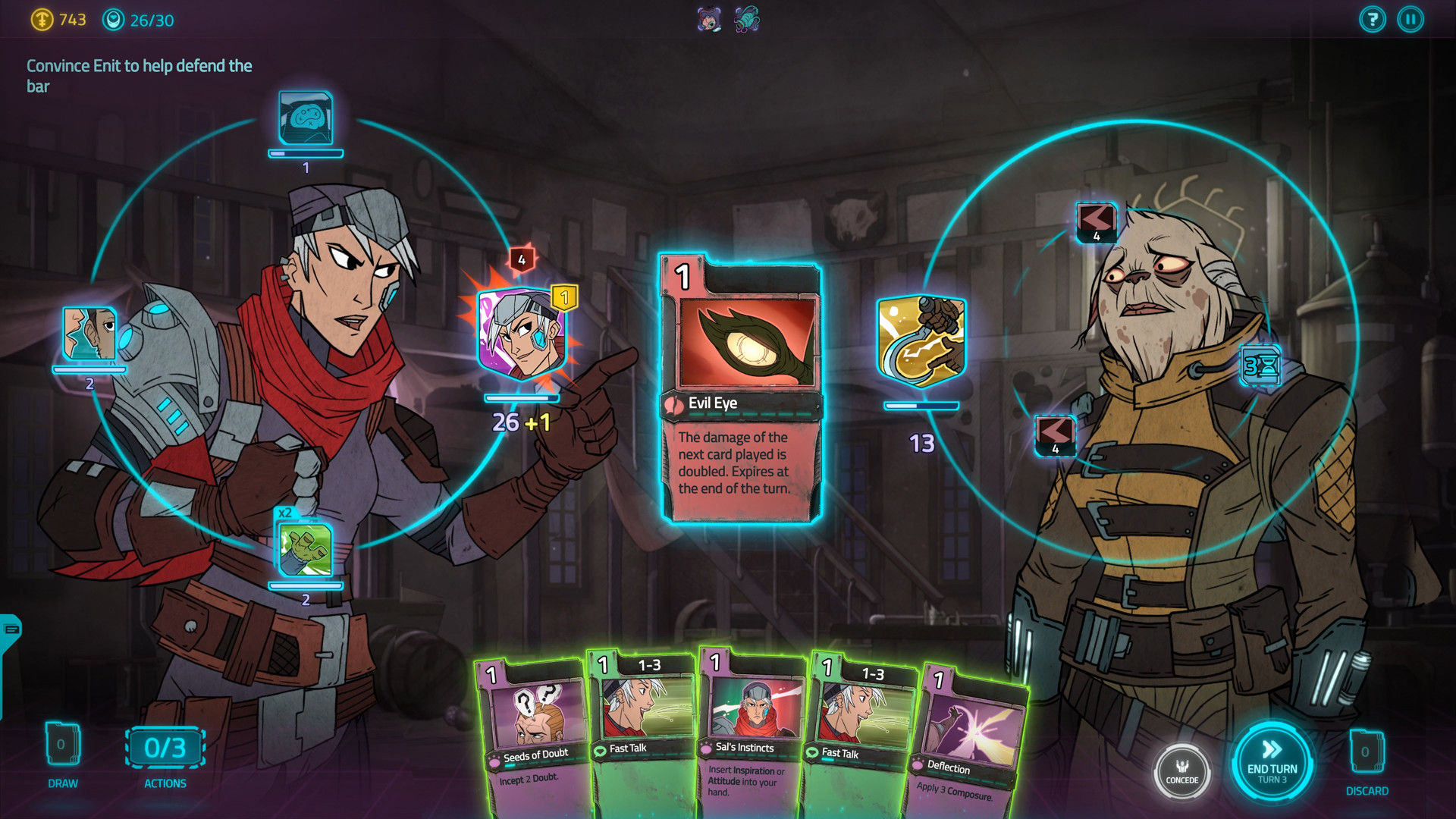 Exploitation is in everything in Griftlands. This takes place at multiple levels: while you’ve got the questionable actions of Sal, Rook and Smith on the one hand, you’ve got the various predations of church and state on the other. There’s thievery and corruption; There’s tithes and taxes. Even though the trio has similar plot arcs, the writing is wonderful on the whole, yet I couldn’t help wanting to know more about the world and how it works. Places. People. Factions. It’s a game that would benefit from a little bit more context.

Griftland’s in-depth structure and progression system reward multiple runs. This consists of a deck-building mechanic which breaks down into combat and negotiation, fitting right into the overall theme of exploitation. Combat is of course a zero-sum game by its very nature, in that there necessarily has to be a winner and a loser. Negotiation in a world like the one in Griftlands amounts to combat by another name: swindle or be swindled. When you think about it like this, it makes a lot of sense to apply the same gameplay for both combat and negotiation, but I can’t help feeling that a more distinctive type of deck-building mechanic might work better for negotiation. Something about it just doesn’t quite feel like a war of words.

In spite of this, I really like how the deck-building mechanics reflect the dispositions of the different characters. You can see this in both combat and negotiation; Sal is pretty strong all around, which makes them a good choice for your first couple of runs. Rook flips a coin every now and then during negotiation that can produce a powerful boost. Smith builds up a stockpile of empty bottles while in combat which they sometimes hurl at their opponents. The result is a wonderful sense of ludonarrative consonance.

The artwork in Griftlands can only be described as gorgeous, even if some animations are stiff and others are used too many times, but the most important point is that it picks up on the overall theme of exploitation. The wealthy live in the lap of luxury in massive mansions and the poor make do with privation in shabby shacks. While the religious and secular authorities can be found in billowing robes and crisp uniforms, the unwashed masses are clothed in overalls and combat gear.

The characters are also effusively expressive. Sal has a slightly menacing look and Rook has the big smile of a con man. Smith is clearly supposed to be care free.  The music is perfectly suited to the grim setting. The maps are what I like most of all, but they also convey the harsh realities of life in these kinds of locations, with the game taking you to a colony and a company town before sending you off to a trading hub. The colony is a gleaming tower and a cluster of cabins. The company town is a stylish office surrounded by slums. The trading hub is a ghetto apart from the gated community at its centre. The inequalities come through loud and clear.

The nature of capitalism

Klei Entertainment made a world which is all about exploitation. The commentary on capitalism in Griftlands couldn’t be any more conspicuous. However, the developer seems to have fallen into the trap of assuming that capitalism is natural instead of artificial, as the game doesn’t present you with any alternatives. The result is a pretty dismal state of affairs.

The fact of the matter is that capitalism is a social construct. The systems of exploitation which make it function were produced by people over the course of several centuries. This point is particularly salient because it points to our capacity to shape the course of events. We have complete control over the future. We haven’t reached the end of history. Capitalism wasn’t some kind of inevitability, and it doesn’t have to go on forever.

This, in my opinion, is the only thing which Griftlands really gets wrong; it seems to suggest we’re stuck with a broken system which can only get more broken with time. You come away feeling as though our society is fundamentally flawed. This just isn’t true, though. Capitalism is an artificial construct. We made it, and we can unmake it. There will be a day when capitalism sits in the dustbin of history; I hope that more developers come to this conclusion, eventually.

Justin is an archaeologist specializing in architecture, urbanism and spatial theory, but he can frequently be found writing about video games, too. He has a column with Unwinnable called Forms in Light which is all about the connections between games and architecture. You can follow him on Twitter @JustinAndyReeve