Dodgeball Academia hits several nostalgic beats in the opening hours. Its bright, cheerful aesthetic is reminiscent of a Saturday morning cartoon I would have watched religiously in my youth, and frequently borrows from the Pokemon games in numerous ways— not only do your opponents spot you from afar, the battle and infirmary music are pleasingly familiar and the simple act of catching a dodgeball sounds similar to a Poke Ball opening. However, even though these references and nods are plain to see, developer Pocket Trap has crafted a sports RPG that is memorable in its own right.

You play as Otto, a kind-hearted boy who heads to the titular Dodgeball Academia with ambitions of becoming the greatest dodgeball player of all time. After arriving a tad late to the opening ceremony, however, his powers are promptly awakened by touching a glowing dodgeball that has sat, perpetually spinning, in a slab of rock since a dodgeball-centric war.

It is utterly absurd. But it is also done with a knowing nod that makes its premise endearing rather than ridiculous. Throughout your journey to win the big school tournament, you meet a cute cast of characters who are delightfully written, even if their stories are rarely surprising. And sure, their personalities are often well-worn tropes, but the humour is so goofy and fun that you will likely love every single one of them—even the villains. Whether it’s Boris’ insistence on being viewed as a tough guy or Chester’s need to remind everyone he’s the smartest person in the room, they all raise a smile or earn a chuckle.

These characteristics are cemented further by wonderfully expressive designs and animations. Otto’s first and best pal Balloony will deflate their head whenever they are upset, making you want to offer them a consoling hug. Elsewhere, Mina, another teammate, will whoop and holler whenever you win a match so passionately you can hear her victory cry, even though the game has no voice acting. 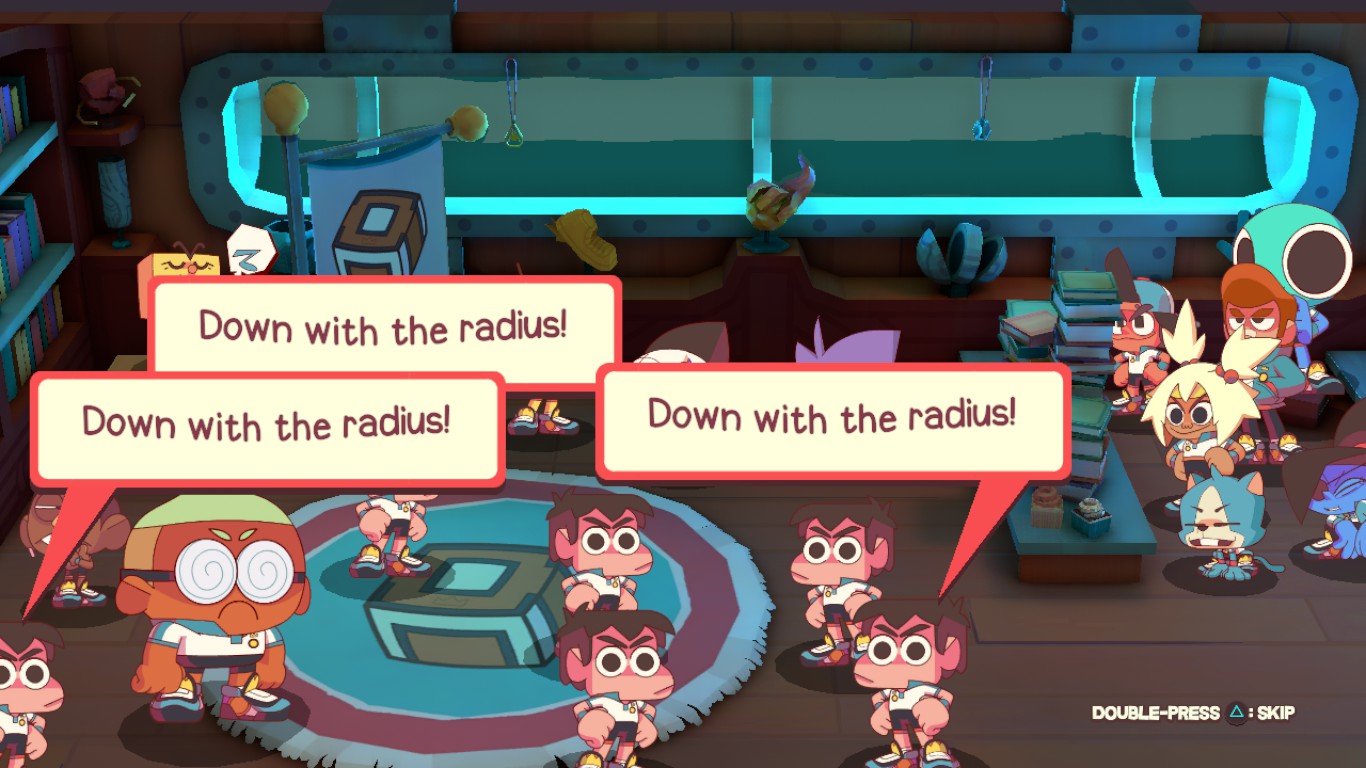 Outside of meeting these quirky individuals, you will engage in a spot of dodgeball. The game’s affable aesthetic might imply this would be a fairly straightforward segment, but it actually boasts a surprising amount of depth. Of course, the aim is simple, lob balls at your opponents until their roster’s health hits zero. At a basic level, this tests your reactions, with good timing required to catch or hit the ball back at your opponent.

But beyond that, there are elemental balls to contend with that can inflict status conditions such as burns or even slow your movement speed. Not every character throws the ball the same way either. Some may toss a slow ball that gathers pace over time, whilst others can perform physic-bending shots that see the ball following an erratic, spiralling flight path. It all serves to keep you on your toes, demanding that you adjust your timing to defend against incoming threats.

On top of that, each character possesses a powerful Balltimate ability. For your team, that can be Otto’s powerful beam that damages your opponents or Balloony’s healing pool that they lay on the ground. As for your opponent’s, this usually results in a volley of balls flying in your direction, bullet hell shooter style, that you’ll either need to acrobatically dodge or repeatedly nail the timing for a catch or counter. This, alongside all of the aforementioned features, see the matches becoming incredibly hectic and exhilarating at times.

Still, there is, unsurprisingly, a lot of dodgeball to be played in the game, which could have become tedious if the developers didn’t opt to include shifting rulesets. Sometimes the match is a simple 1v1, whilst others a 3v3 affair, though you’re only ever properly in control of one character at a time. Beyond that, in some rounds, when one of your opponent’s HP hits zero, they will move behind you on the court, picking up loose throws and hurling them your way, meaning you’ll need to keep a close eye on both directions. They’re subtle adjustments, but they definitely keep that feeling of unwanted repetition at bay. 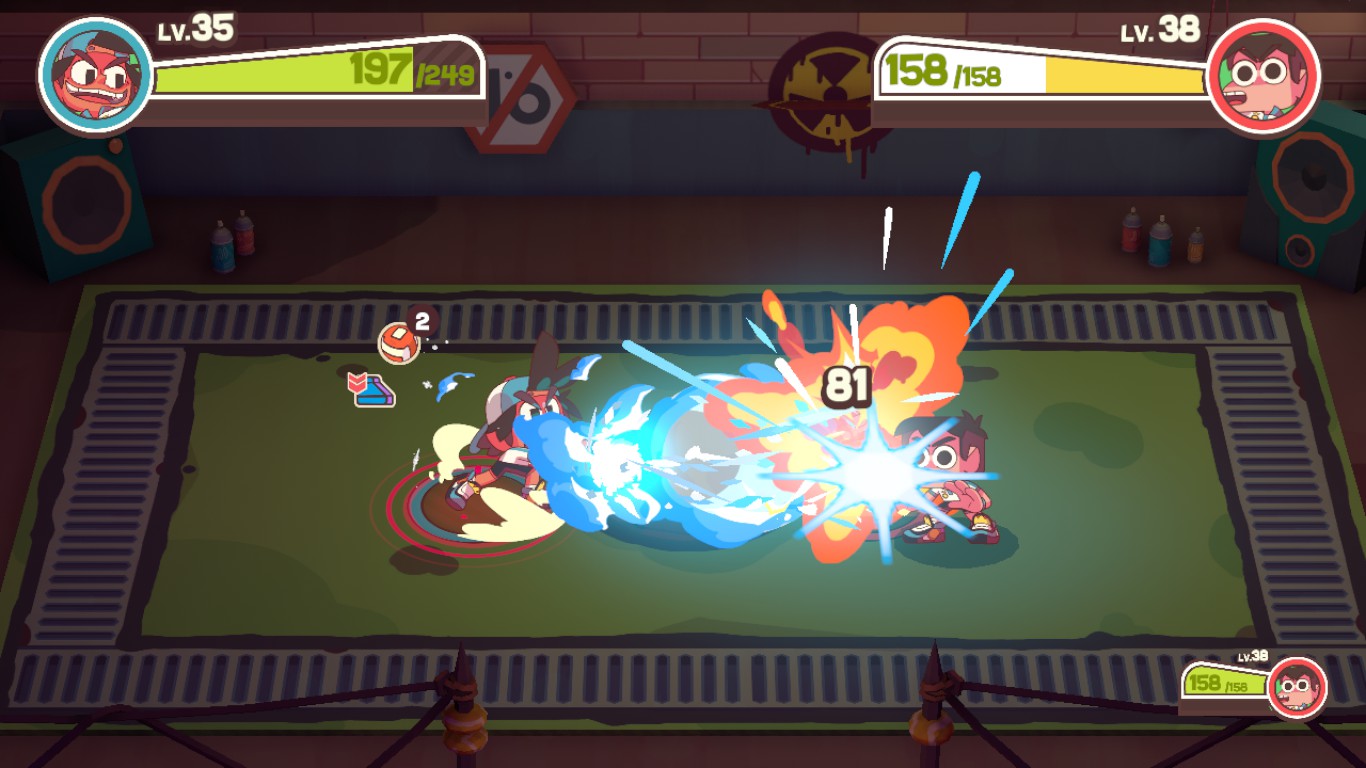 The only issue with the bouts of dodgeball is that you don’t know which ruleset is in effect for each match. You see, you can put on various equipment to adjust your stats, and it would have been nice to know precisely what I’d be up against so I could tweak my strategy accordingly. Similarly, certain characters worked better in specific conditions. If the match looked like a war of attrition, I’d want Balloony’s healing prowess, whereas, for a shorter game, I might opt for more firepower.

There’s also some inconsistency in difficulty. The game is split into eight separate days, with the main quest focusing on classes and tournament matches. As you roll between mission objectives, your classmates will challenge you to battles if you cross their line of sight, much like in Pokemon. These particular bouts tend to be incredibly easy compared to the story matches, often only lasting mere seconds before you move on to the next section. In contrast, some quest-based games are noticeably trickier, most notably in the middle section. However, the wobbly difficulty doesn’t take away from the fun. It is just a little jarring on occasion.

For the most part, though, Dodgeball Academia is an unbridled joy with a lovely cast of wholesome characters, even though the narrative isn’t always that fresh. If it was merely fun and silly writing alone, I’d still thoroughly enjoy my time with it because it reminds me fondly of excitedly waking up on a Saturday to watch daft cartoons and play video games—back to simpler times. The fact that the act of playing dodgeball is also fantastic is a warmly welcomed bonus.