Part of the allure of rock stardom is the allure of becoming someone else. Someone who feels more confident, more interesting, more successful than you might right now. It’s a path that allows one to subvert the expectations that have been set for you—by friends and family, by educators and employers, by your own senses of survival and doubt—and transcend the mundanity of modern life. The odds it’ll work out are infinitesimally small though, leaving countless would-be musicians wondering what could have been instead of taking the stage.

What if the script were flipped, though, and the assumption from birth is that you’d become a musical prodigy?

That’s the question at the heart of The Artful Escape, a musical narrative adventure from Australian rocker Johnny Galvatron’s game development studio Beethoven & Dinosaur (via indie imprint du jour Annapurna Interactive). It blends familiar narrative tropes of wayward youth with a unique blend of platforming and musical mechanics to produce an experience that crosses genres while staying true to nothing other than its own creative vision.

Opening for a folk legend 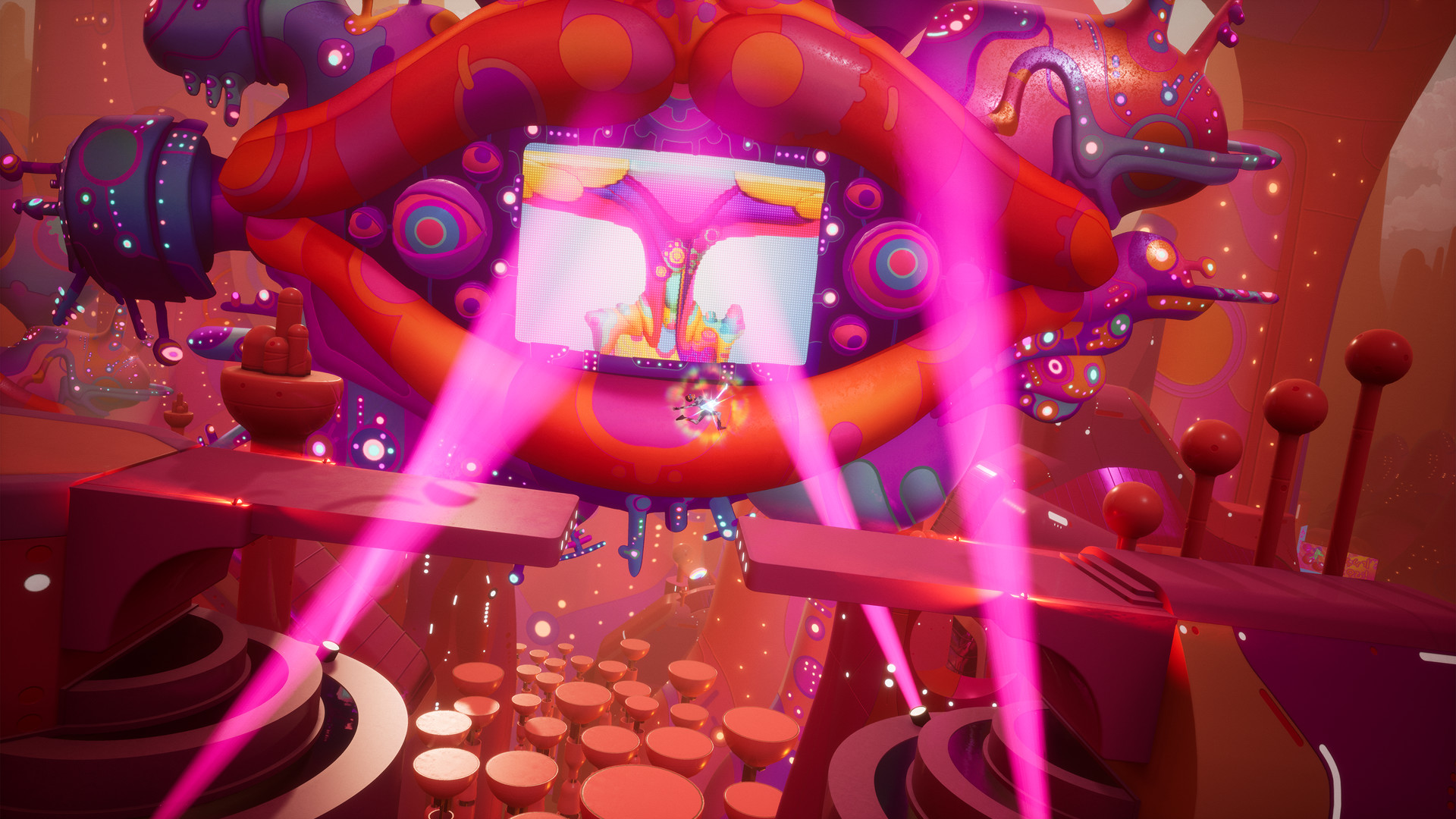 The Artful Escape opens in Calypso, Colorado, a tourist trap town nestled in the mountainside, where teenage singer-songwriter Francis Vendetti (voiced by actor Jason Schwartzman) is preparing for his debut concert. First shows are always a nerve-wracking experience, but even more so when you’re the nephew of a folk music legend, and your performance is part of a celebration for the anniversary of his landmark album. Between adoring townsfolk and an aggressive promoter with a bottom line to satisfy, it’s enough to make one want to disappear.

That’s exactly what happens when Francis gets warped into an alternate dimension in the middle of the night by a strange being named Zomm (who looks something like an elongated brain in a floating glass tube) where he shreds his way through a journey of self-discovery along with sarcastic stage coordinator Violetta (Lena Headey) and interstellar guitar god Lightman (Carl Weathers). This is the moment where the game shifts from feeling like a Wes Anderson-esque film to an interactive sci-fi rock album cover, trading sensible earth tones for bright neon dreamscapes. When it comes to subverting expectations, the game walks its own talk.

Performance of a lifetime 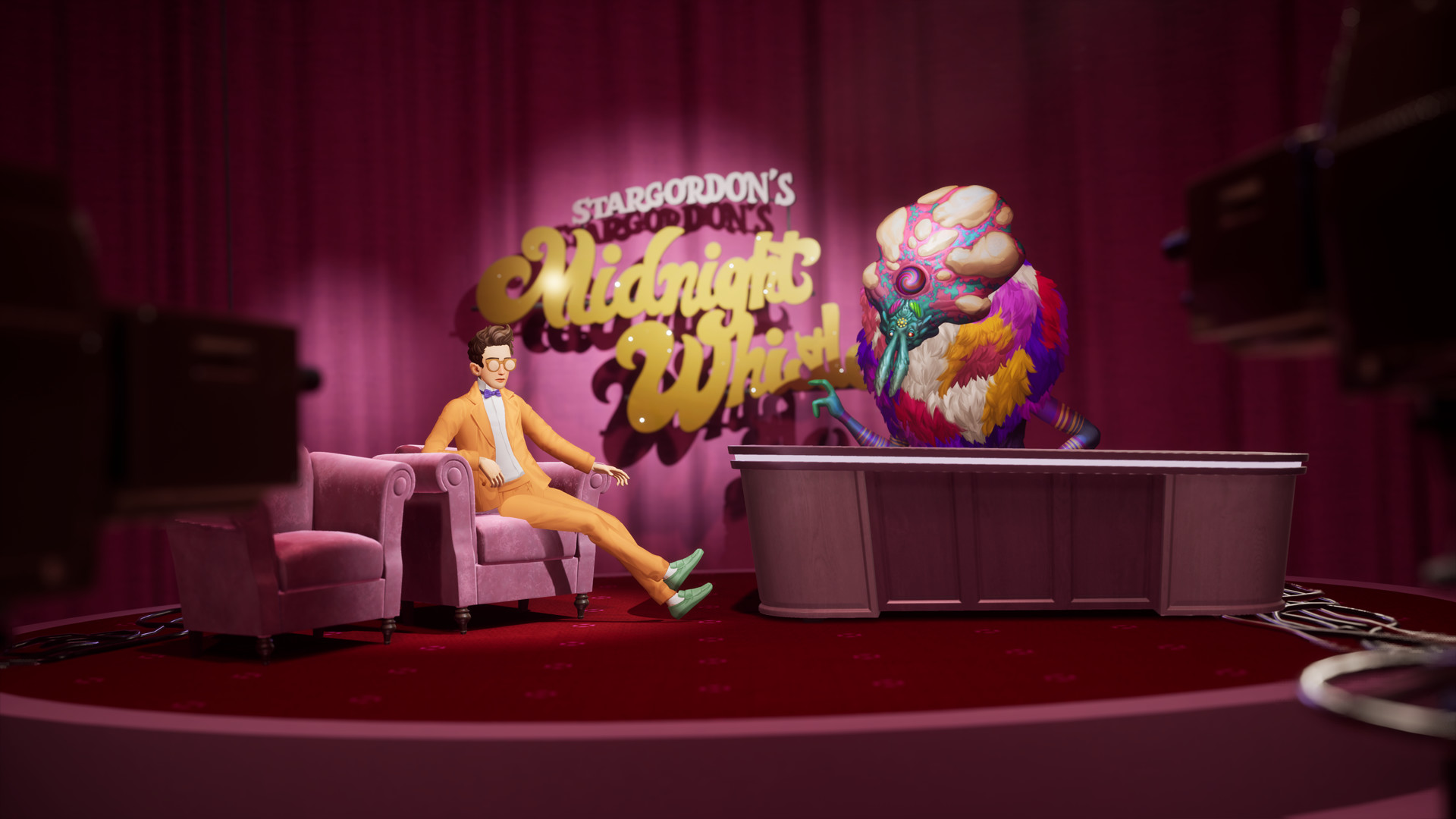 The Artful Escape weaves its way through its four to five-hour runtime with tightly written dialogue trees, breezy platforming sequences, and high-stakes shred sessions with otherworldly beings. On paper, this sounds like a bizarre mashup of mechanics that shouldn’t work together. Yet they do, somehow, creating a cohesive experience that defies much explanation but feels extremely satisfying to play (you’ve got to love any game with a dedicated button for playing sick guitar licks for no purpose other than the satisfaction of riffing while leaping through space).

There’s not much challenge to be had here, though some late-stage segments do succumb to stiff controls that aren’t quite fine-tuned enough for polished platforming, leading to a level of trial-and-error that can mildly disrupt the flow of Francis’ adventures. This is a minor criticism, however, and certainly nothing that mars the overall experience in an impactful way. While approaching The Artful Escape like a traditional side-scroller will likely lead to consternation, those willing to follow its rhythms wherever they may lead will find much to discover.

Players are not mere witnesses to the protagonist’s journey of self-discovery either. Branching dialogue trees offer a level of agency in guiding the narrative, as do interactive options to customise your appearance. The Artful Escape is at its best when it pulls the player into the story as an active participant rather than an outside observer, and in a way, perhaps inviting the player to interrogate their own internal resistances as they think through their responses to (at times) heated questioning from those trying to push Francis to live up to his potential.

By the time the final credits roll on The Artful Escape, it’s a challenge to succinctly summarise what you’ve just experienced. It’s a game without a genre, one composed of familiar elements blended in an unfamiliar way, creating something that is uniquely its own. It’s been a long time coming since The Artful Escape was given its initial glimpse of what was in store, but when it’s all said and done, it leaves the audience satisfied but still wanting just a little more. Like any good concert.