Beyond Blue is the perfect game for nature documentary lovers

For me, nature documentaries are a fantastic way to chill out. Taking you out of the rush of modern life, they serve as a reminder that there is something else at work in the world, some other system beavering away that’s beyond making and spending money. Beyond Blue is an educational exploration game that plonks the player directly into one of these unfathomably large systems, that of the ocean. I had the pleasure of playing the demo while at EGX Rezzed, and boy did it chill me the hell out.

In Beyond Blue you are cast as the research scientist Mirai, who is leading a team of scientists using exciting new technologies to discover more about the deep blue sea. In full release the game will likely have three of ocean environments to explore, but for the demo, I played through a world of coral reef, whales and dolphins. And, yes, it really is as breathtaking as it looks in the screenshots. 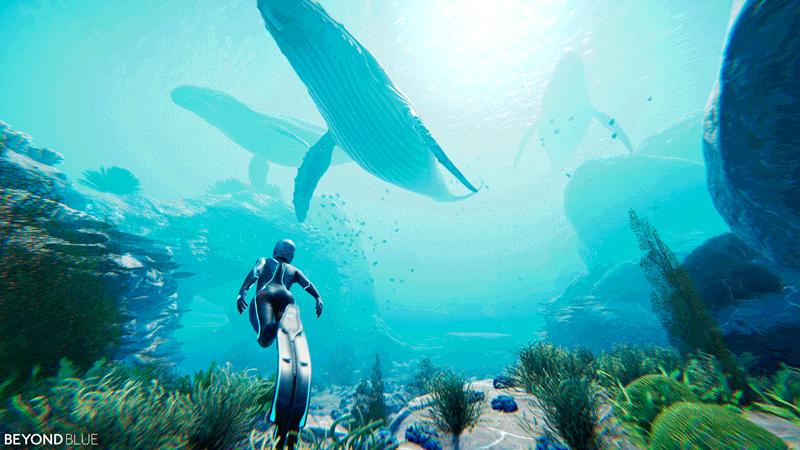 Swimming around whilst in communication with my team on the surface, I directed Mirai’s graceful movement as she made excited observations on the species she encountered. Using buoys dotted around the map, players lock onto the noises of various animals to find their location, and then swim off to scan them. This simple mechanic is more engaging than it may initially sound, as each haunting vibration of a possible whale or dolphin sent me flippering off in a rush to see where the noise might have come from.

Made by E-line Media, the team behind the similarly detailed and educational-in-skew Never Alone, partnered with the team behind BBC’s Blue Planet for this venture, and the level of detail and knowledge is apparent in even just the demo playthrough. In full release the team intends to use snippets from interviews with researchers from Blue Planet and marine scientists to further enrich the gameplay. I honestly can’t wait.

While the topic of the environment is likely to bring more doom than hope these days, Beyond Blue is a joyful experience, highlighting the beauty we can still experience, if we’re passionate enough to go out, find it, and look after it.

To find out more about Beyond Blue, visit their Steam page. The title is due for release sometime in 2019.