Millennials are killing the cult industry. 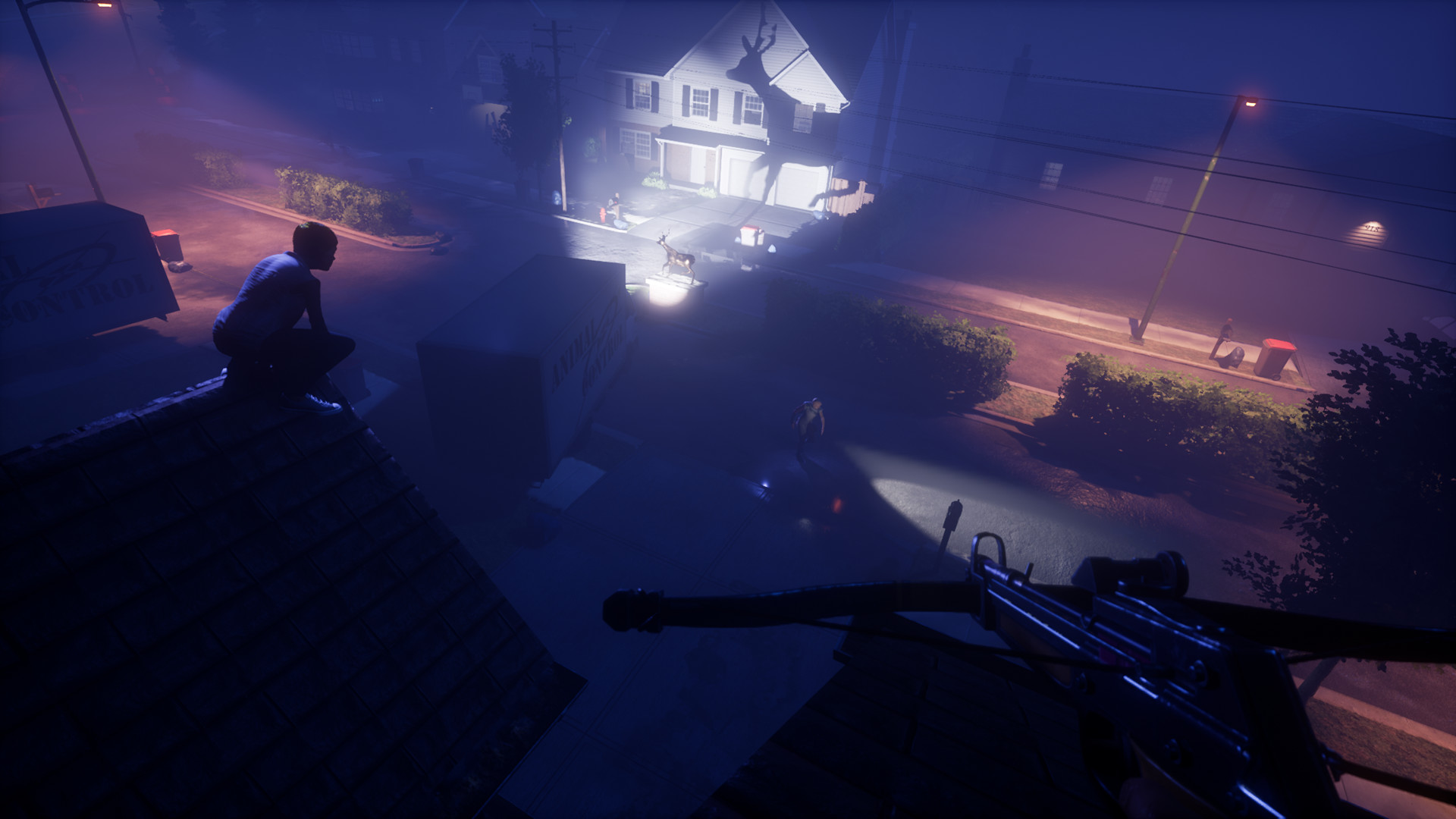 “I left the player character from Amnesia: The Dark Descent locked in a cupboard on the first level.”

These are all phrases that came to mind long after I’d cheerily accepted the review code for The Blackout Club without truly considering what I was signing up for. So I did what any sensible coward would do and waited until midday, with all the curtains open and a cup of tea before I bit the bullet.

Ultimately, I needn’t have worried so much. Aside from the prologue – and we’ll definitely get to that – The Blackout Club is more creepy than horror. It’s a 1-4 player co-op stealth game with clear immersive sim influences stemming from the development team’s history with series like Thief, Bioshock and Prey. 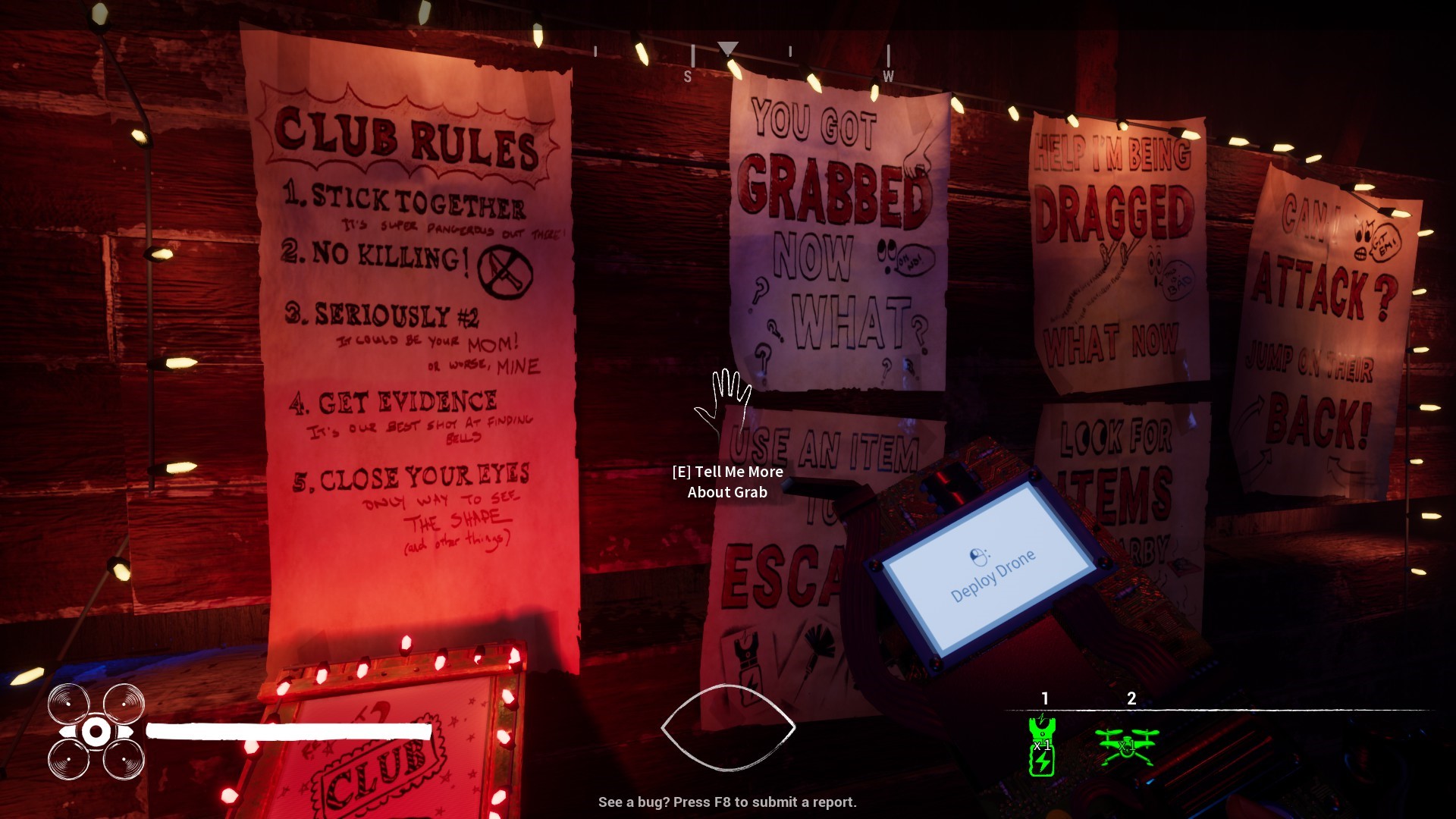 In a town gripped by a strange, sleepless cult, a group of teens have banded together after repeatedly finding themselves blacking out, waking up in strange situations. As a member of the titular club, you’ll journey into the town at night, completing objectives, dodging adults and attempting to find enough evidence to show the outside world what’s going on.

Before jumping in, the game advises the player to complete the tutorial, and so do I. More than a simple explanation of the controls, this half-hour-ish segment sets up the world and gameplay in a very well crafted single-player story segment. The plot follows Bella – voiced by Ashly Burch – as she attempts to escape a suburban town under apparent lockdown. The entire prologue is wonderfully paced and directed, echoing the spirit of PT and managing to create a genuinely tense and unsettling atmosphere without resorting to jumpscares.

Following this, you create a character and join the ranks of the club. Cosmetic customisation is initially quite sparse, but you’ll be able to purchase more (with candy, not real money) as you go. You’ll unlock minor powers, which provide small bonuses, as well as choosing a hero item for each mission – either a taser, a grappling hook or a tranquiliser crossbow. 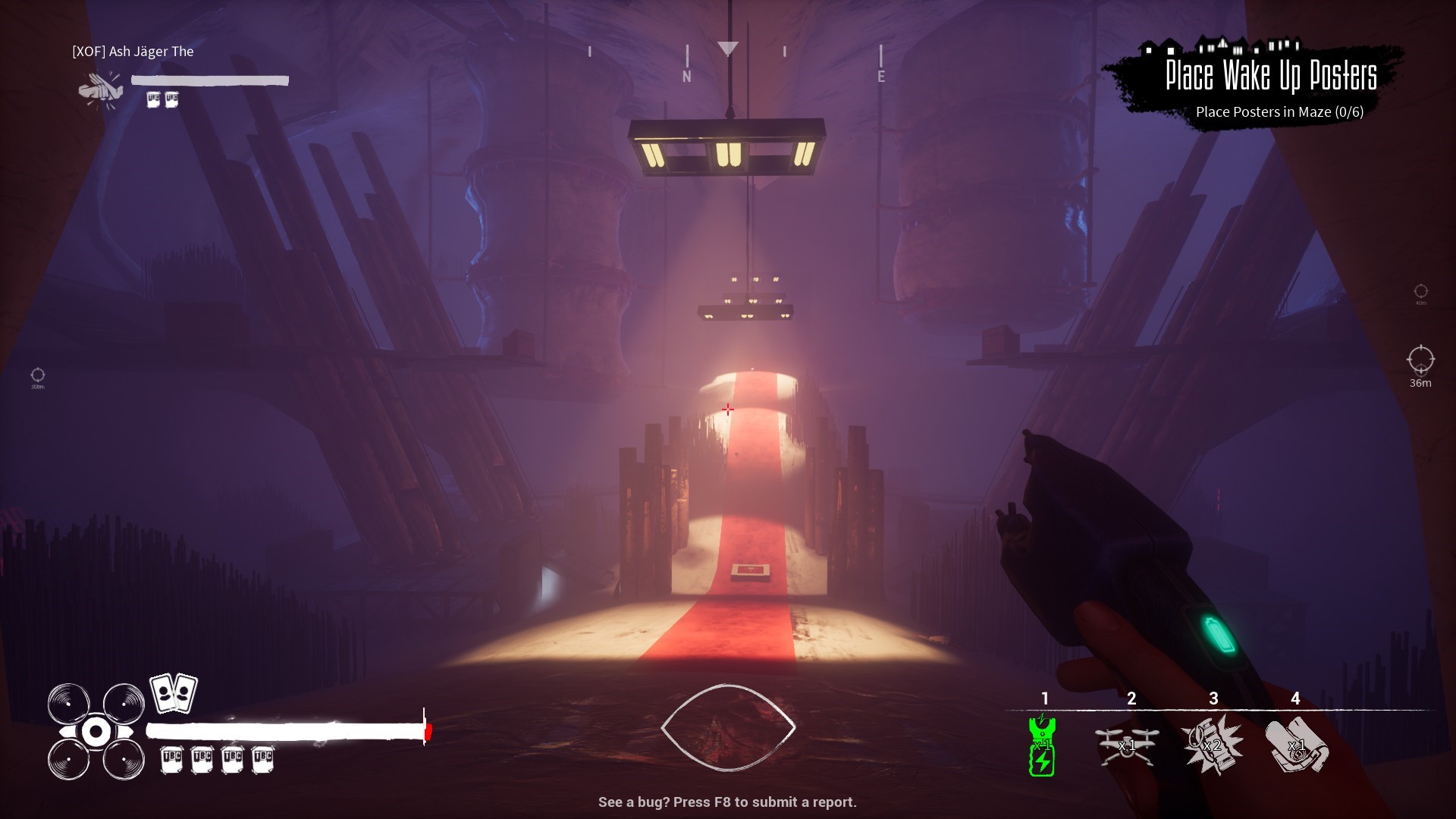 Each kid also has one permanent ‘major power,’ chosen from strength, stamina, phone hacking and drone piloting. I picked the drone which, at higher levels, can not only create a distraction but can record evidence and even fire tranquiliser darts. Other tools are found within each mission and are pleasingly multi-functional. Foam grenades, for example, can be used to soften the sound of a fall, but can also gunk up the workings of a mechanical trap or security drone. These tools exist to evade or escape capture, but the club has a rule – no killing. That masked cultist could be your grandmother, or someone else’s.

AI enemies come in a few flavours. Sleepers are blind, but have excellent hearing. Lucids can see, but don’t have quite the same aural ability. The Shape… is The Shape. You can only see The Shape when your eyes are closed. The Shape can appear anywhere on the map, at any time. The Shape will relentlessly hunt down your party, one by one, until you are all in its thrall. The Shape is terrifying.

Missions all take place within the same town, but your objectives are different each time. You might find yourself tasked with putting up TBC recruitment posters, stealing cultist artifacts or recovering lost documents. As you level up, you’ll unlock more and more of the town and its strange, cavernous underbelly. You’ll become intimately familiar with your favourite routes and hidey-holes, with the Thief-esque climbing and mantling system allowing you to traverse areas with ease.

Exploring new areas, particularly underground, is one of the game’s highlights, made even more impressive by the visuals, lighting and lush soundscape (although to explain exactly why this is would probably count as a spoiler). 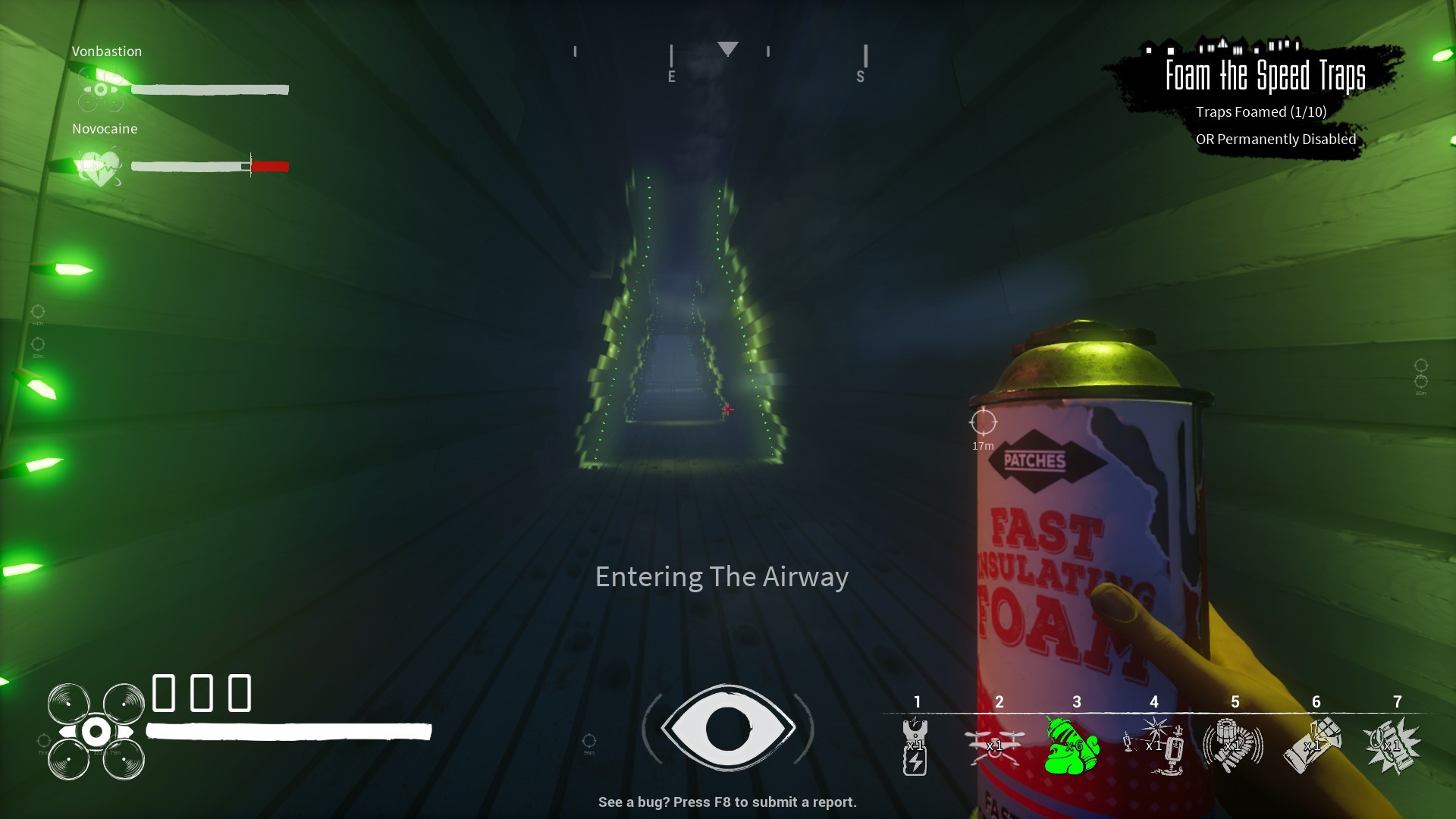 Aside from rescuing and reviving captured friends, there aren’t many objectives that actually require co-operation. I’m still conflicted as to how I feel about this. On the one hand, no content is locked off from those who prefer to play solo, although they’ll find the game a much more difficult experience. On the other, there’s often little sense of proper coordination between players and it’s entirely possible that one player will do most of the work in any particular game.

As always, the quality of online play comes down to the people you find yourself playing with. An organised team of friends is undoubtedly the best way to experience The Blackout Club, if you can get a group together.

Last, but certainly not least, is The Blackout Club’s take on an asymmetrical multiplayer experience. Not every kid is a member of the club. Some are Stalkers, sent to capture evidence of the club’s misdeeds and report back to their cultist masters. Usually, the first time you’ll know that a Stalker has invaded your game is a picture message of you doing something naughty. If you don’t catch them, they’ll draw The Shape towards your location.

Actually playing as a Stalker is, for me, the most fun part of the game, not dissimilar from the Versus gameplay in Left 4 Dead. You’ll need to use cunning to hide from the rest of the players. It’s just a shame that the opportunity doesn’t come up more often, as you can only become a Stalker while being invaded during one of your own missions. 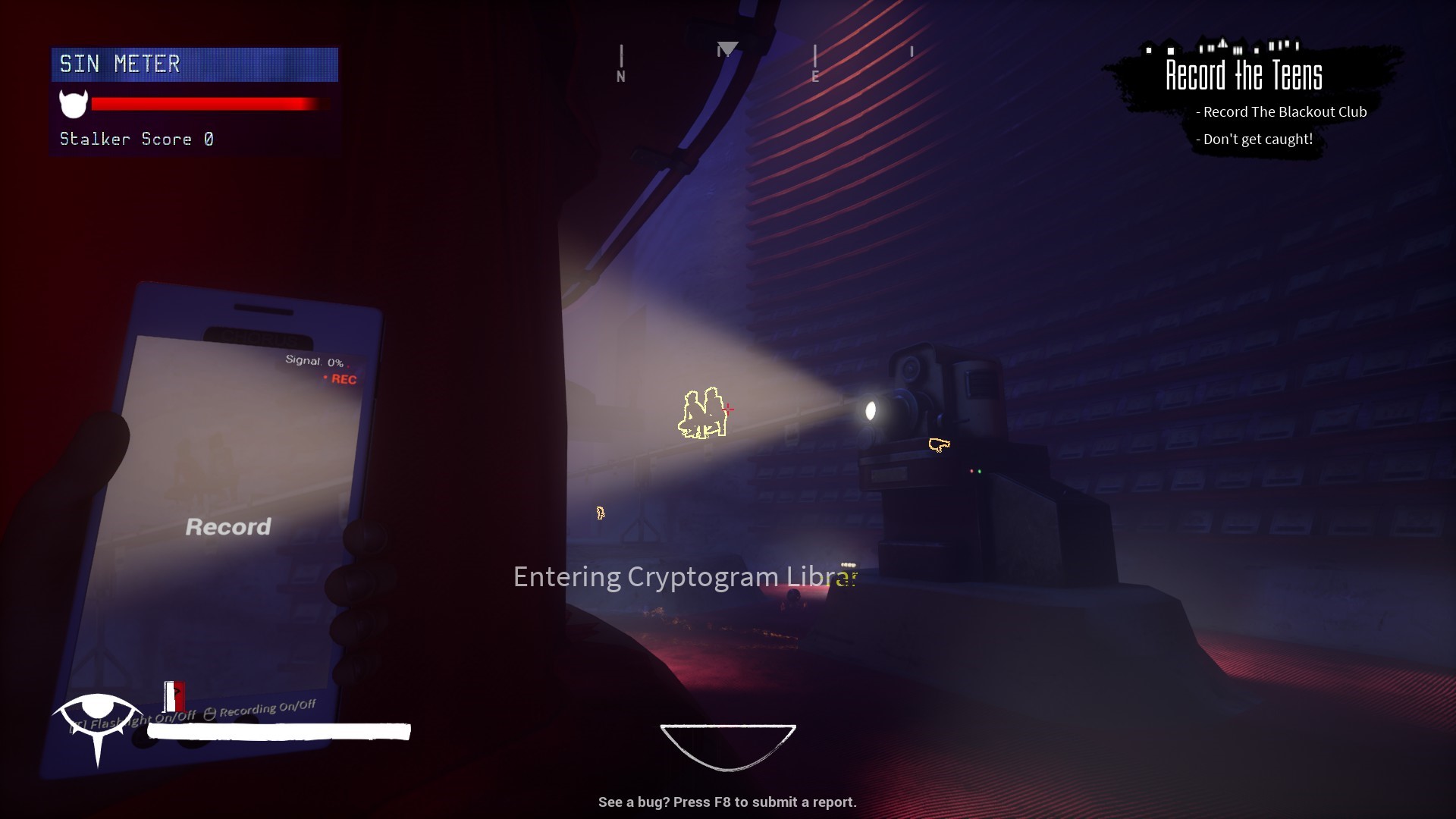 The Blackout Club isn’t really a horror game. Essentially, it’s a non-lethal stealth game with horror elements. Co-operative and antagonistic multiplayer elements keep it from getting stale too quickly, although the true measure of its longevity lies in content updates post-launch. Eventually, the game will need more locations, enemy types and objectives. Greater focus on co-op would be a huge bonus, too.

Personally, as someone who thoroughly loved the prologue, what I’d also like to see is more of the single-player experience. More story, character interactions and tightly authored stealth-horror segments. More exploration of the lives of individuals in this strange town.

Conceptually, at least. I mean, obviously I’d never actually play it. But somebody should. Now, if you’ll excuse me, I’m off to burn every copy of Alien: Isolation I can find.