The Church in the Darkness Review

Unlikely to make a believer out of you. 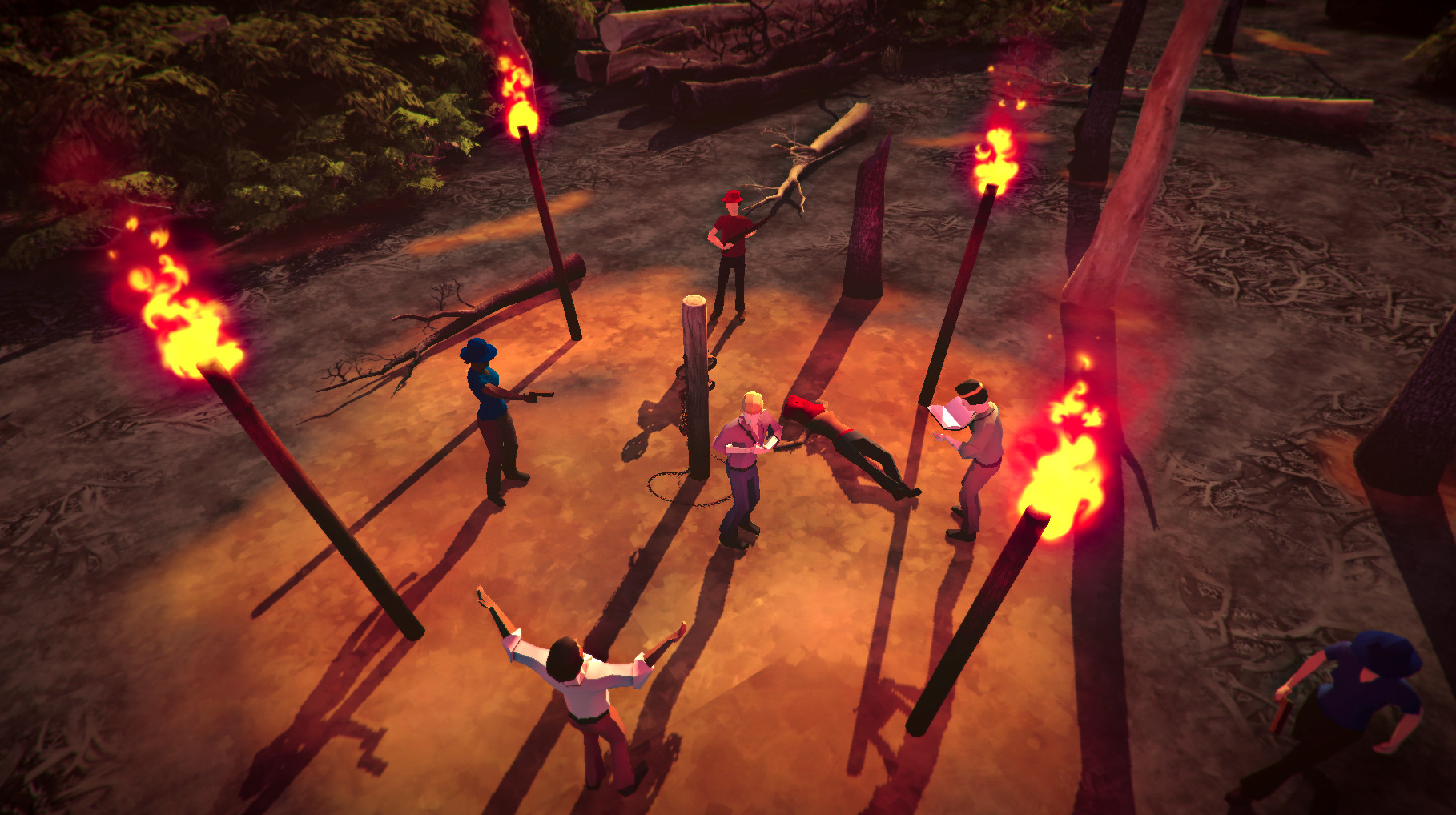 The Church in the Darkness is the newest project from game design veteran Richard Rouse III and the first game to come out of his studio, Paranoid Productions. Originally intended for a 2017 release, it’s been repeatedly delayed, but it’s finally here. Unfortunately, it struggles to justify the wait.

In The Church in the Darkness, players take on the role of ex-law enforcement officer Vic to infiltrate a religious cult and connect with Vic’s nephew, Alex. The game is a rogue-lite in that the cult’s camp, called Freedom Town, is randomly generated each playthrough, though the basic structure is always the same. The personalities of the two cult leaders, married couple Isaac and Rebecca Walker, also change in each playthrough. 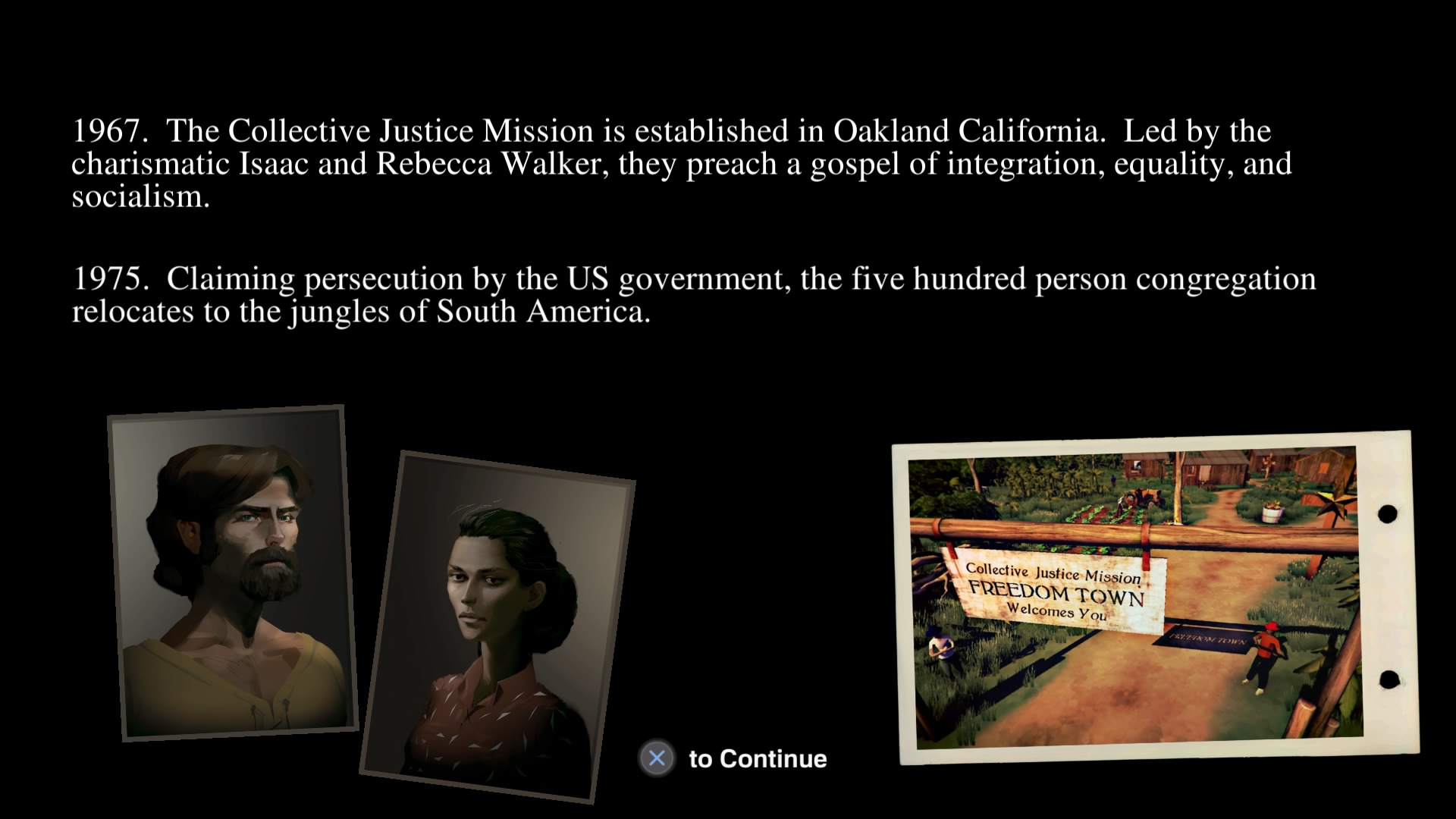 The infamous 1970s Jonestown cult is the most obvious influence for the cult in The Church in the Darkness. Both cults are comprised of United States citizens that flee to South America and found agricultural communes. The setting of The Church in the Darkness is its most innovative and successful feature. The game’s exploration of the political upheaval and violence of 1970s America—complete with (sometimes on the nose) interrogations of racism, homophobia, and sexism—feels particularly relevant today, and interacting with that time through the lens of a dangerous religious cult feels fitting. However, The Church in the Darkness often makes it a chore to get to the character interactions I craved, and the game’s narrative ends up a minimal part of the experience, marred by its grueling gameplay.

Each playthrough of The Church in the Darkness begins with an overview of the history of Freedom Town and some form of correspondence asking Vic to investigate the camp and check on Alex. Players are then given the vague location of one of a handful of friendly NPCs that will give Vic more information on Alex. 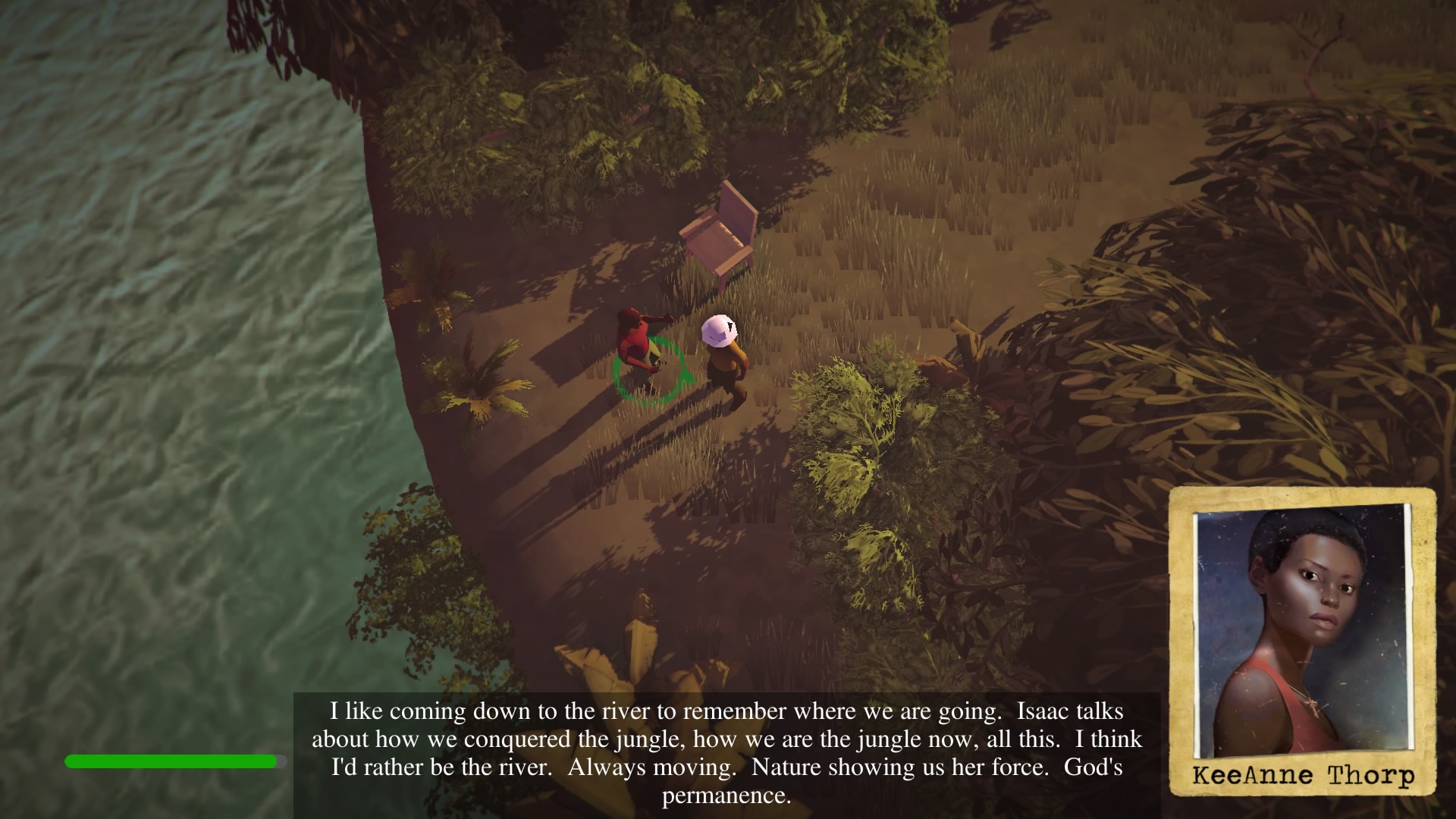 The only characters that players interact with are those NPCs, Alex, and the cult’s leaders. The few character interactions that are available are interesting and well-written, providing a wealth of personality in just a few short exchanges. But those exchanges, particularly with the NPCs, quickly grow to be grating upon repeated playthroughs because they don’t change significantly, or at all, even when the cult leader’s personalities have ostensibly changed.

Players also experience Isaac and Rebecca as they explore Freedom Town through the cult leaders’ constant tirades over the megaphones set up around the camp, but their fervent declarations also change little or not at all, even when their personalities have supposedly changed. Players will hear the same soundbites repeatedly, though thankfully The Church in the Darkness is at least fully voice acted. The performances are captivating, especially those of Rebecca and Isaac who are voiced by longtime video game voice actors (and real-life couple) Ellen McLain and John Patrick Lowrie respectively—the couple is known primarily for their work on Valve’s biggest games. 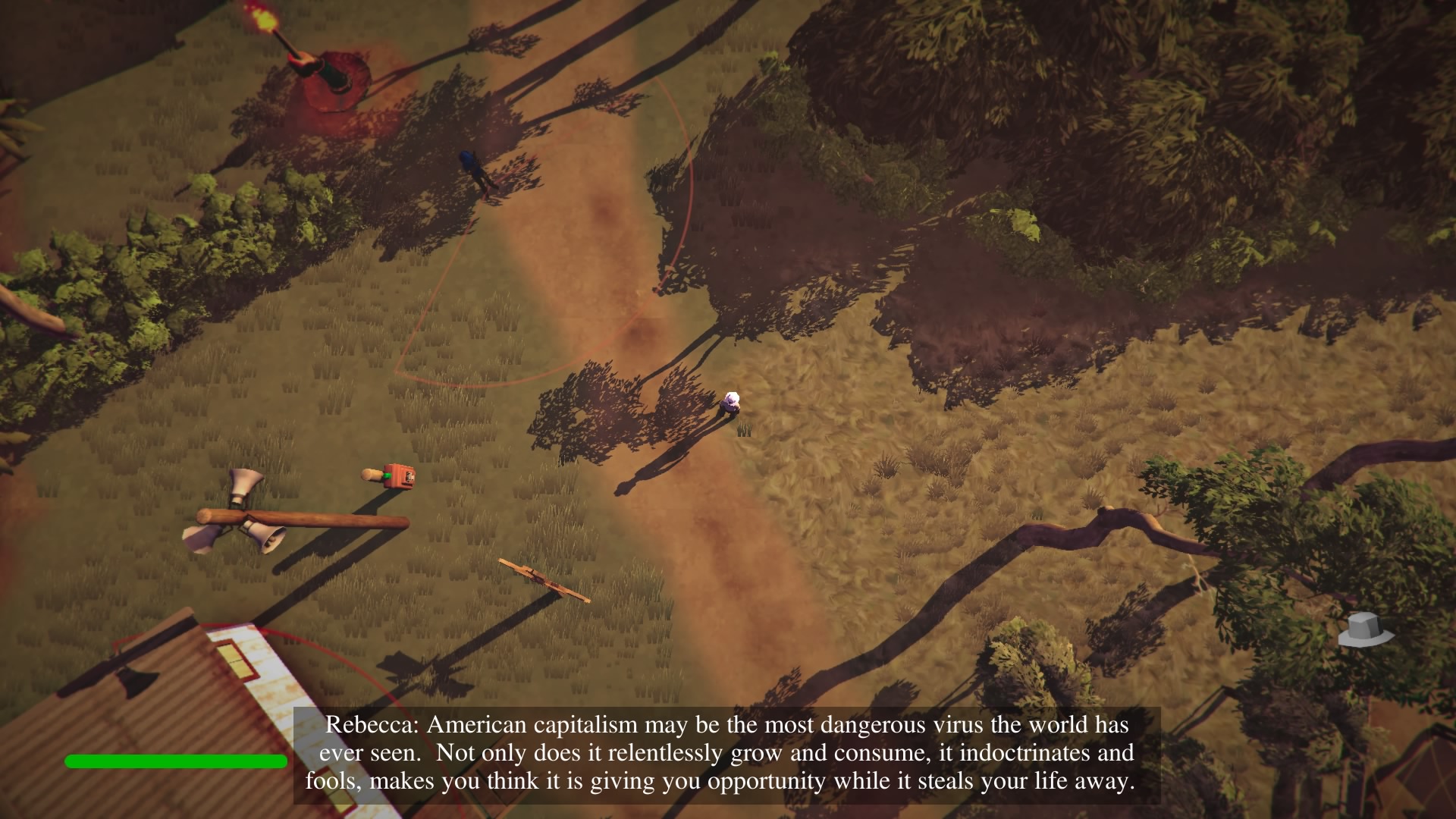 The Church in the Darkness’ character interactions are hidden behind a wall of messy and unpleasant stealth gameplay. As an outsider, Vic is forced to sneak around camp lest he is shot on sight by the many armed guards around Freedom Town. Frustratingly, this doesn’t change on different runs, either. Even when the leaders are seemingly more reasonable and less overtly violent, guards still shoot Vic on sight.

While the player has access to firearms themselves, the mechanics for controlling those weapons are lousy and unrefined, and players are better off avoiding conflict altogether. In fact, the mechanics for sneaking are also quite filmsy; on higher difficulties players can’t see the guards’ cones of vision and thus must guesstimate whether they’re in the eyes of the enemy, a very inexact science that had me quickly resorting to playing on the lower difficulties. Even then, I found myself quickly overwhelmed by guards if I got spotted. Pro tip: the townsperson and guard disguise items are fundamental to your success.

In addition, perhaps intentionally, The Church in the Darkness is rather directionless. Players are left to explore and discover the secrets of the compound without significant instruction. That made it difficult to understand what I could and couldn’t do to achieve the game’s various endings. For example, most successful playthroughs end with the player escaping Freedom Town. However, the game is very unclear when the player is able to leave from the extraction point.

During one playthrough, I wasn’t allowed to leave until I had disabled the alarms that were currently active in the camp. In other playthroughs, the game struggled to recognize various decisions I tried to make, like when I carried one of the cult leader’s unconscious bodies to the other cult leader. 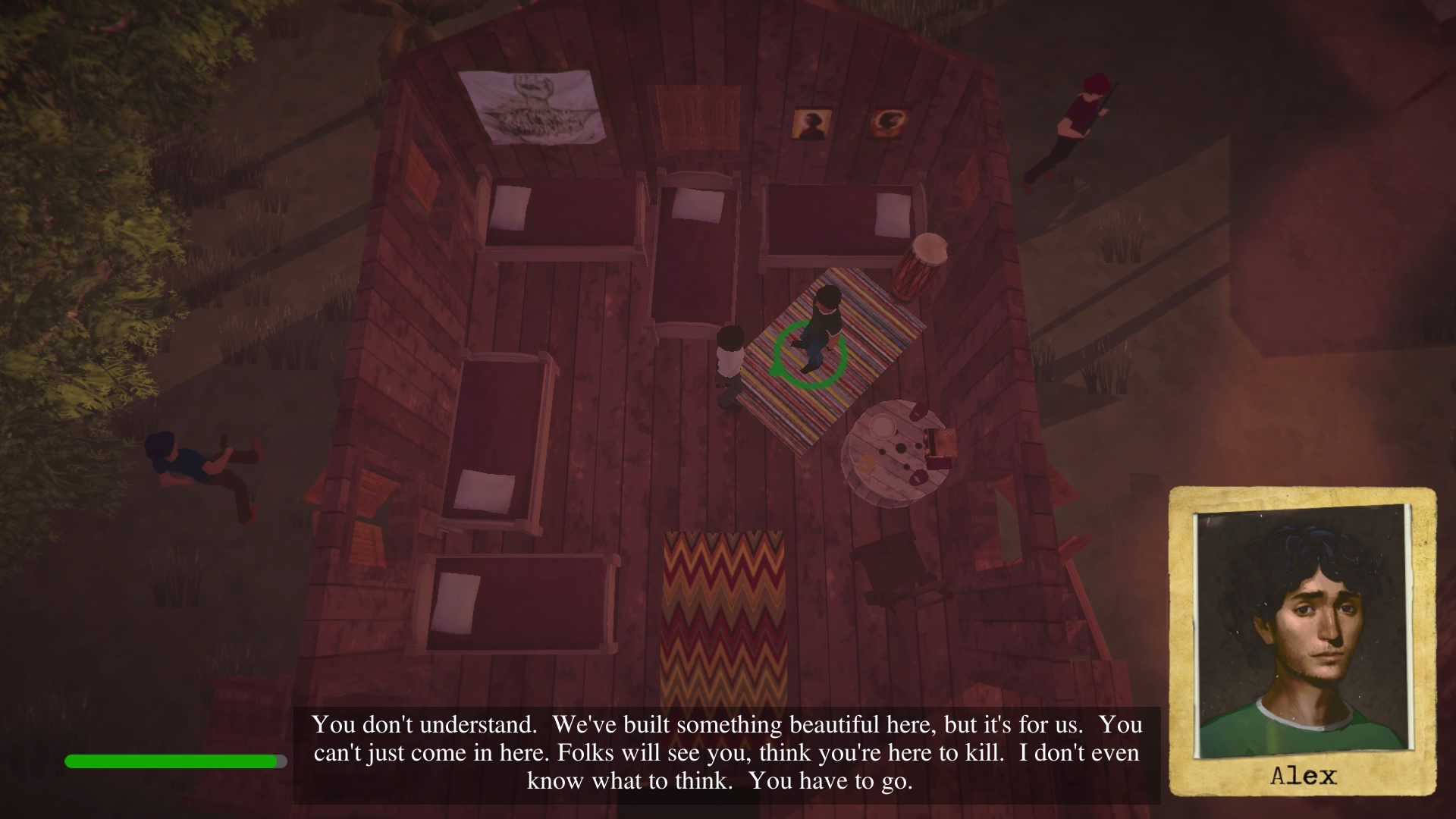 Throughout my time with The Church in the Darkness, my ability to satisfyingly interact with the game’s admittedly interesting characters and world was hampered by less than engaging stealth gameplay and confusing direction. As a narrative-focused game, I think The Church in the Darkness would greatly benefit from more focus on its story and less on its rogue-lite mechanics. The various personalities of the cult leaders aren’t easily distinguishable between playthroughs and thus the primary purpose for its rogue-lite nature is moot. Its narrative could be far stronger if it emphasized repetition less, which just makes its characters less likable, and instead refined a more directed path for its players, still allowing for replayability and multiple endings.

Ultimately, The Church in the Darkness rewards players with a fascinating and original cult setting, but the provided method for navigating and interacting with that setting is entirely uninteresting. For some, it may be worth trudging through an uninviting cult compound to understand their experiences and culture; for me, I wish I’d stayed far away.