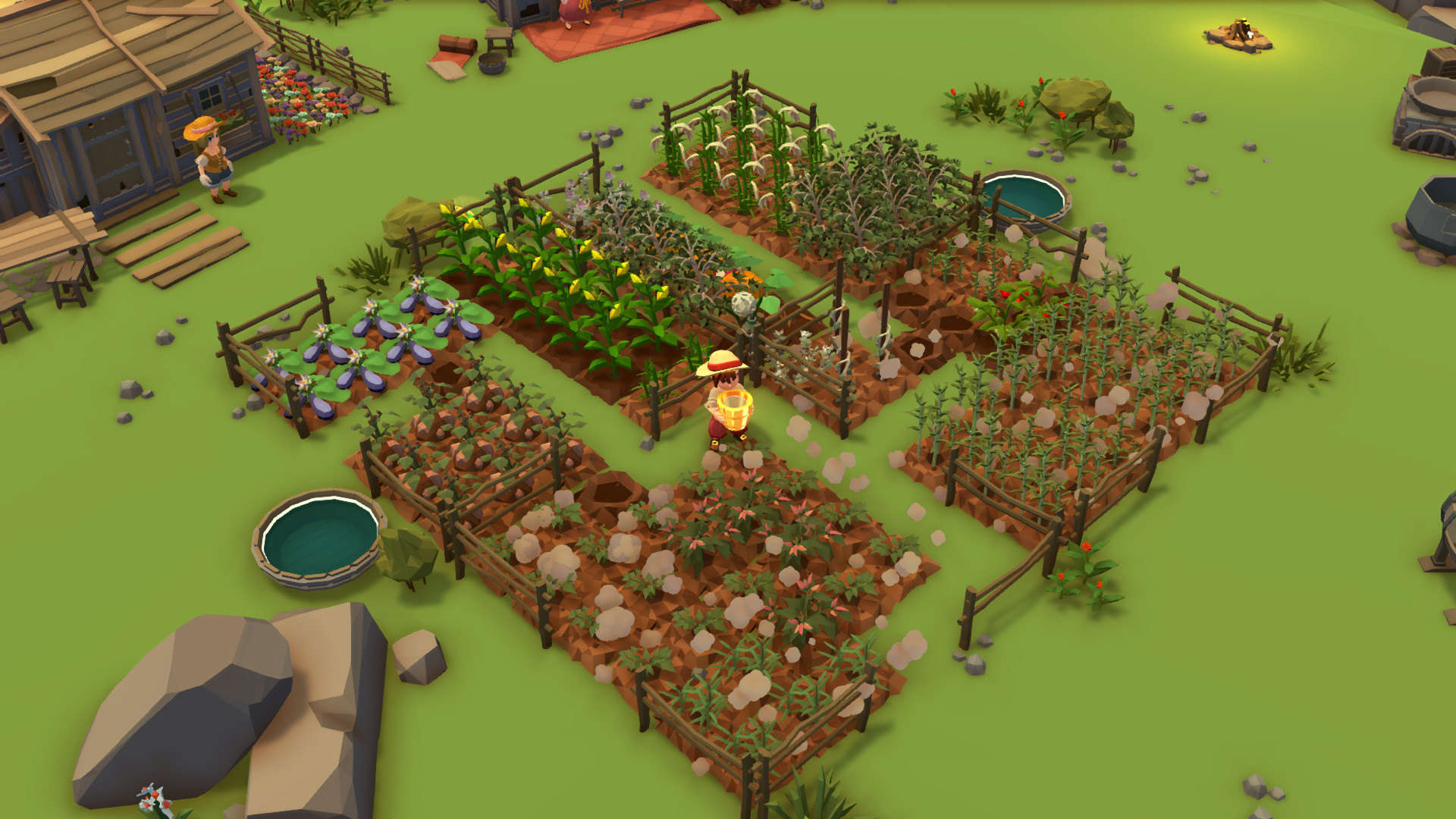 I have a soft spot for farming simulators a mile wide. Simply give me a grid of soil and a selection of seeds to nurture into healthy veggies, and I’m sold on whatever else is built on top. Stranded Sails – Explorers of the Cursed Islands from Lemonbomb Entertainment bills itself as an “open world exploration farming adventure,” which is both a mouthful and a mountain of design elements to balance. Luckily, the five-person team of German developers have largely succeeded, delivering an endearing game full of relaxing maritime agriculture.

On first blush, Stranded Sails looks related to Nintendo’s late-90s slate of action platformers and RPGs — the colors are vibrant and the character models are bouncy collections of sharp polygons. The fairly close isometric camera centers the action on a silent protagonist as they join their father and a crew of tradespeople aboard a ship bound for a nameless new land full of opportunity. But the game never gives these would-be colonists a chance to start a new life as a sudden storm dashes the ship against the islands of a mysterious archipelago. 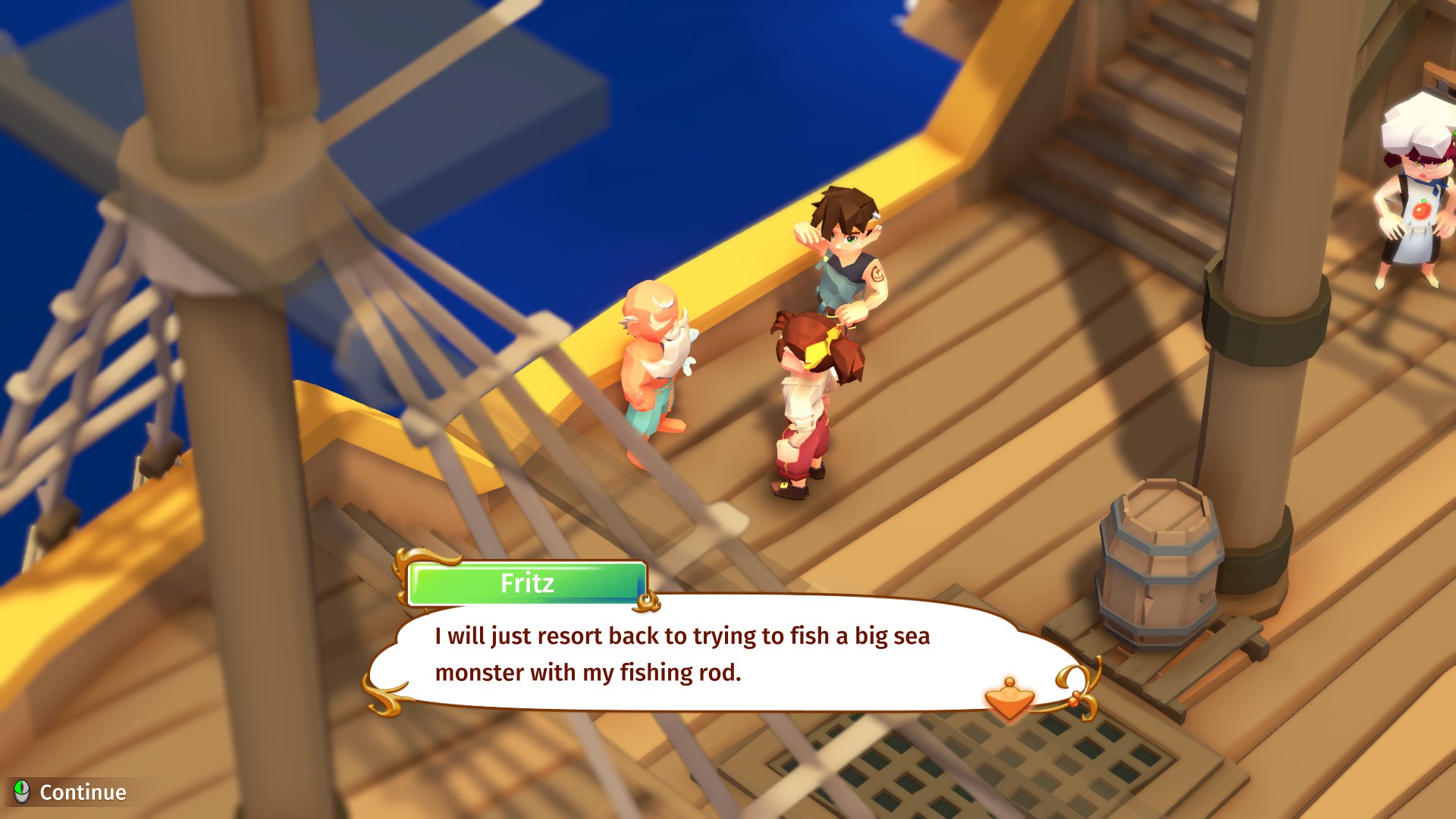 Survival is now the main objective, and doing anything on the islands costs some of your character’s finite energy. Managing that constantly dwindling resource will motivate nearly every action you take in Stranded Sails, as the only way to top off your bar is through sleep or filling your belly. As it so happens, one of your crew is a farmer, and she has found a gorgeous plot of fertile land upon which to start a camp. Gardners, strap on your gloves.

When simply walking across a sandbar rapidly siphons away stamina, your ability to explore early on will be limited by the kind of food you can cook. Which is, in turn, limited by the availability of crops, fish and spices. The core mechanical conceit reveals itself early: time and effort invested in growing your garden directly benefits how far afield you can roam before returning to restock supplies. A resourceful adventurer will prepare ahead, stuffing their knapsack with only their most filling island cuisine. 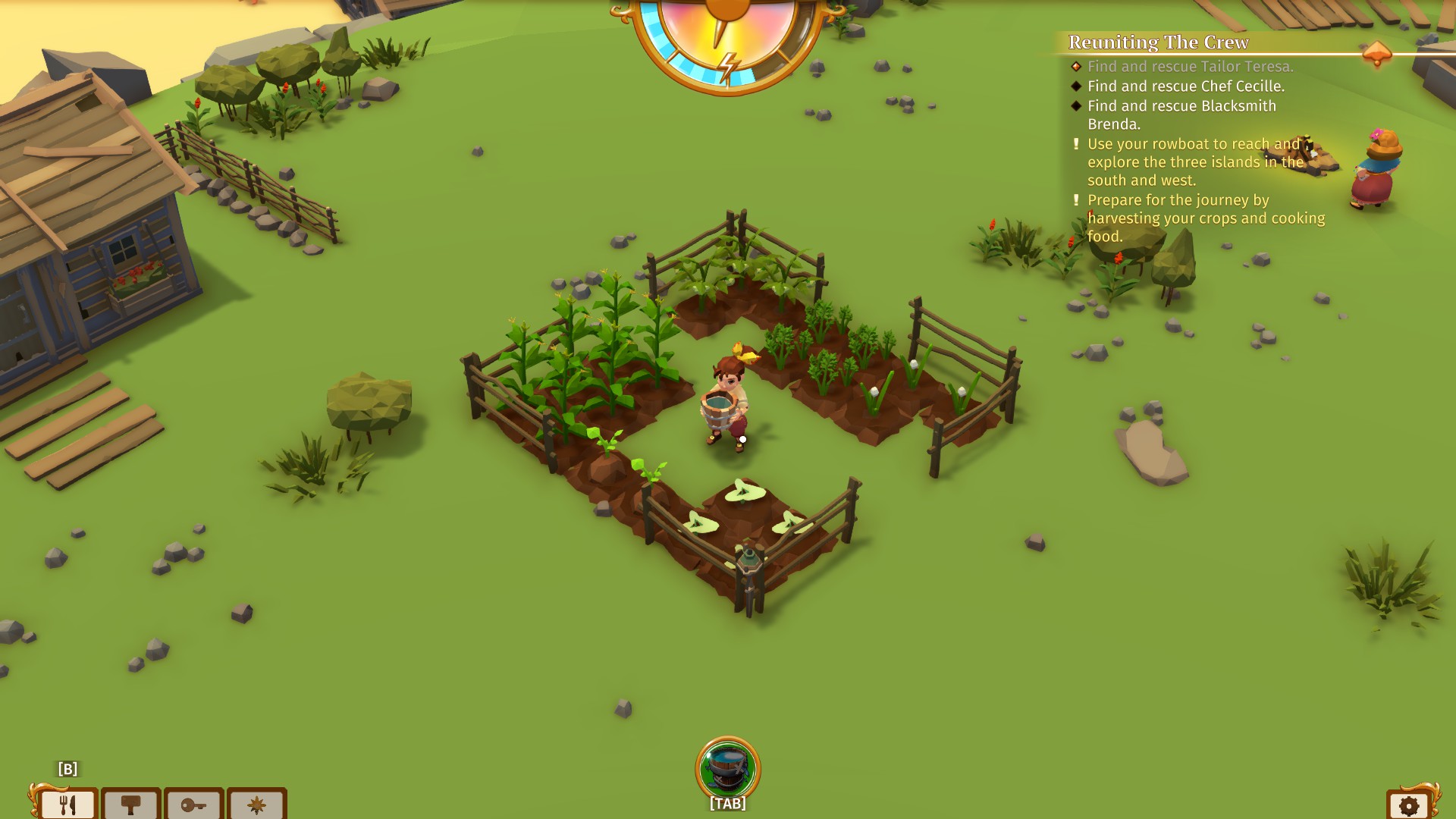 In practice, these interlocking systems create a satisfying feeling of gradual progression. Every trip beyond the safety of the campfire and cookpot saw me collecting new seeds or rescuing another crew member who might offer me a critical tool for progressing further. Back at the makeshift farm I could whip up a stew that not only provided a nice buff but endeared the other castaways to me. Friendly tradesfolk offered camp upgrades or a larger lunch pail. It pays to keep bellies full.

Out in the wilderness, you will find resources in the form of naturally growing wood and veggies, or else useful debris washed upon the shore. What you won’t find are beasties, monsters, or other aggressive enemies: Stranded Sails is largely a non-combat game. Though ancient ruins and scraps of lore point to an expanded lore behind life on these islands, your first several hours consist solely of exploring lush landscapes and reconnecting the crew lost in the shipwreck. 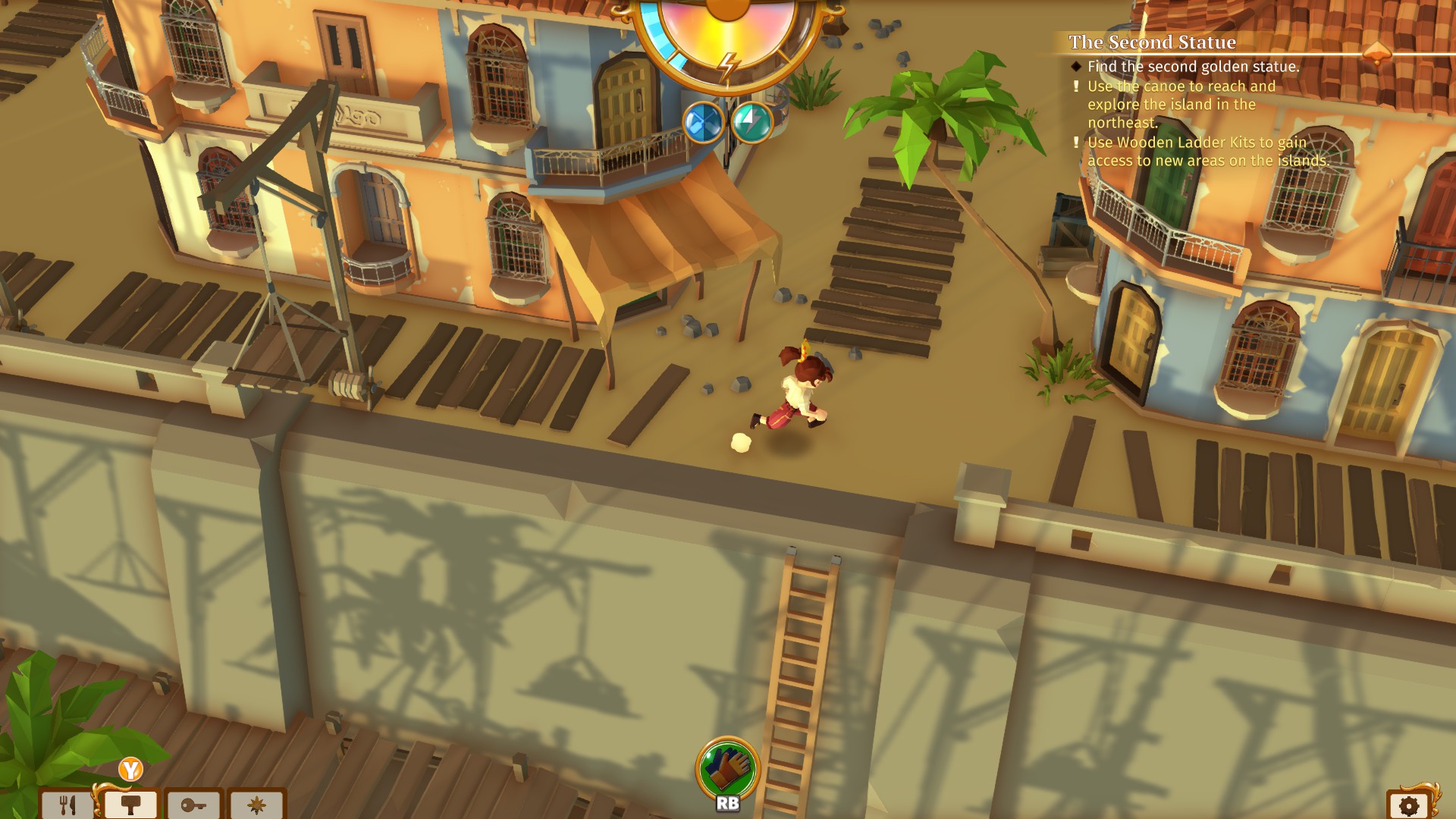 Lemonbomb did a fantastic job of creating a gorgeous collection of islands that never feel like they reuse assets. One is a craggy collection of bare beaches and exposed rock that protects a verdant jungle on the rainward side, while another evokes mangroves sprawled across shallows and sandbars. Even the ocean shows off a carefully considered beauty at the same time it makes you feel very, very small in a quaint rowboat. The art direction is a salve on the constant retreading in Stranded Sails, as none of the islands are fully accessible the first time you make landfall. Whether sheer distance wears you down or progression requires a sophisticated tool, some parts will remain just out of reach until later.

At a certain point a few hours in, I wondered why I was throwing myself into the sea time and again while everyone else stayed back at camp. My father, critically injured at the beginning, was the only one with a valid excuse. Then, I returned to camp and noticed new decorations on the shacks I had provided everyone. And someone had fashioned a table and chairs out of flotsam near the campfire. More of these homey touches appeared as the story progressed, lending life to the makeshift camp that evoked a stronger emotional reaction from me than I had expected. 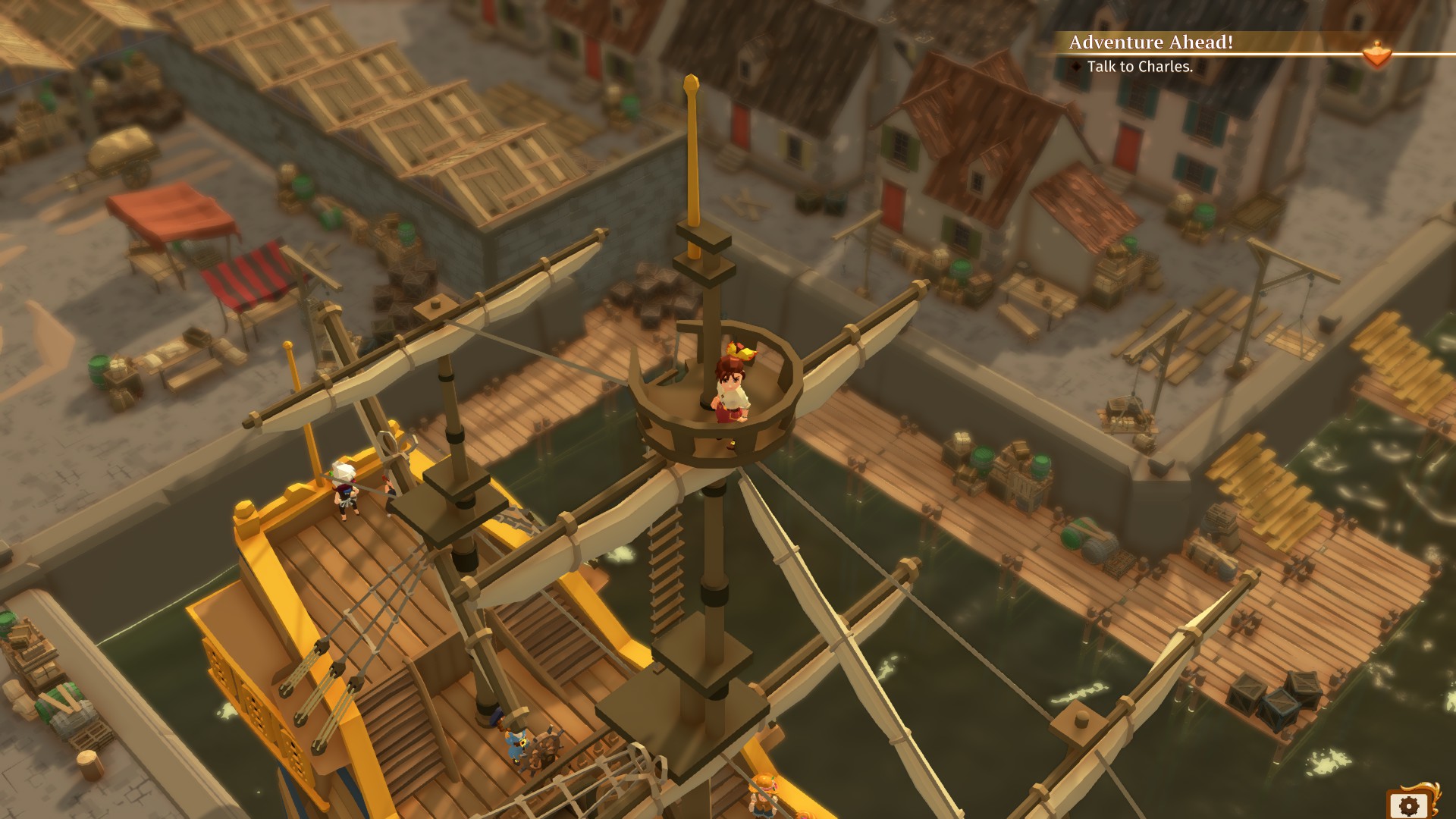 When I mentioned earlier that Stranded Sails was a non-combat game, that was partially a lie. You will need to dispatch a certain kind of enemy late in the game for story-critical quests, but the entire system feels disconnected like nothing else in the game. By showing up late and sparingly, it lacks the depth and refinement of even fishing and could have easily been replaced with light puzzle-solving for the same effect. The combat isn’t bad, per se, but I was disappointed as soon as the game instructed me to find the scattered bits of a weapon. I was having plenty of fun watering potatoes and traipsing through cave systems.

The only other complaint fit to lob at Stranded Sails comes from my frustration with discovering new recipes. Despite having a trained chef in camp, you must throw ingredients at a pot until something edible cooks out the other side. Sometimes this is intuitive (corn plus tomato equals corn-stuffed tomato); others require mixing and matching until the recipe screen delivers green checkmarks for each correct ingredient in the matrix of possibilities. With no hints or advice to guide me, I often resorted to plugging away at every possible permutation until brute force awarded me with thyme-rubbed mackerel and pumpkin chunks. It’s not intuitive and less fun with each additional possible ingredient. 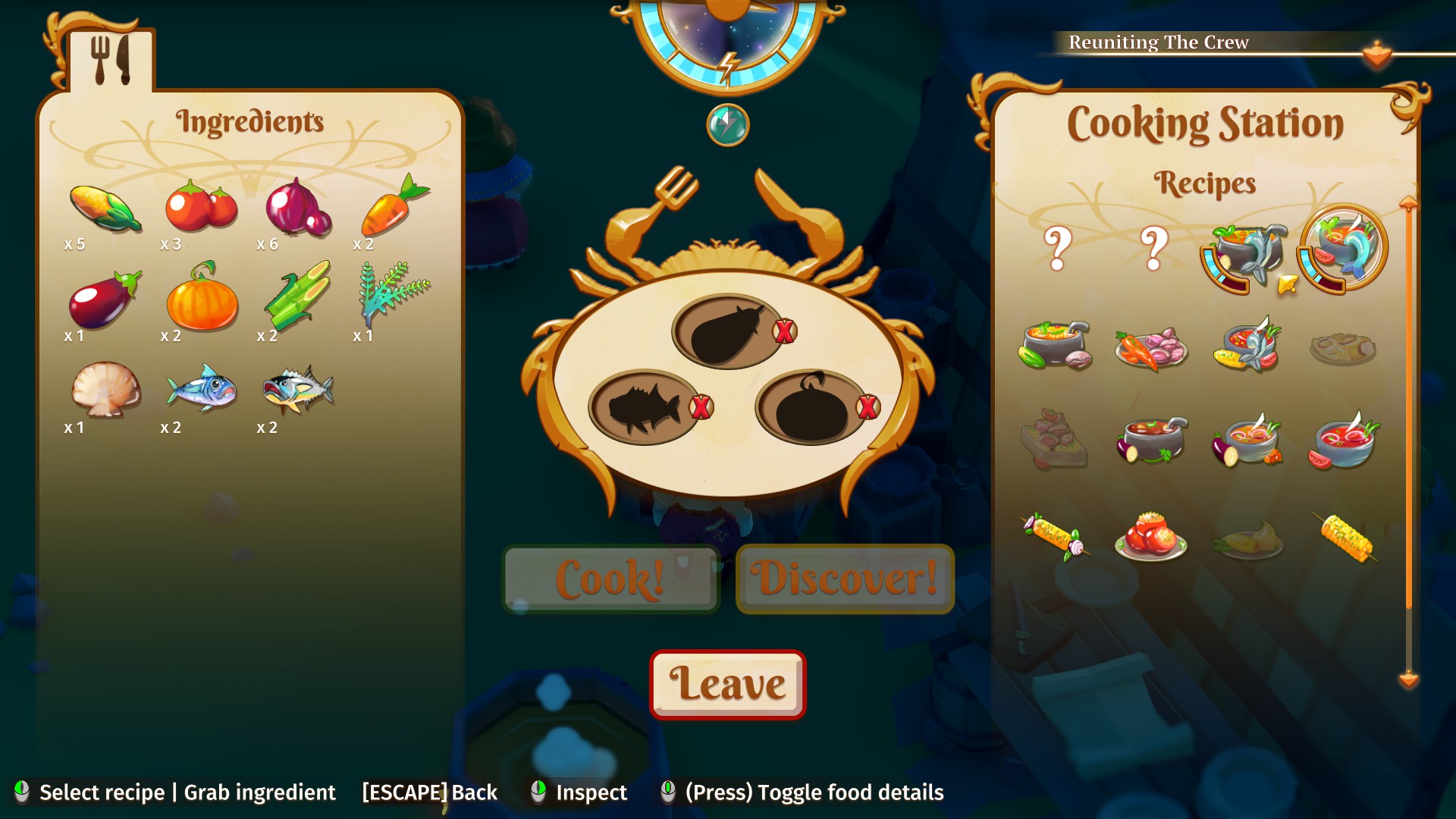 Overall, Stranded Sails – Explorers of the Cursed Islands delivered everything I wanted from a farming simulator while also nailing the “open world adventure” section of their description salad. The main narrative isn’t complex, but its characters provide enough verve and earnest emotion to make up the difference. If you want a relaxing game that takes a clever approach to delivering a gradually unfurling world of beautiful polygons, it is well worth looking past the few rough edges.