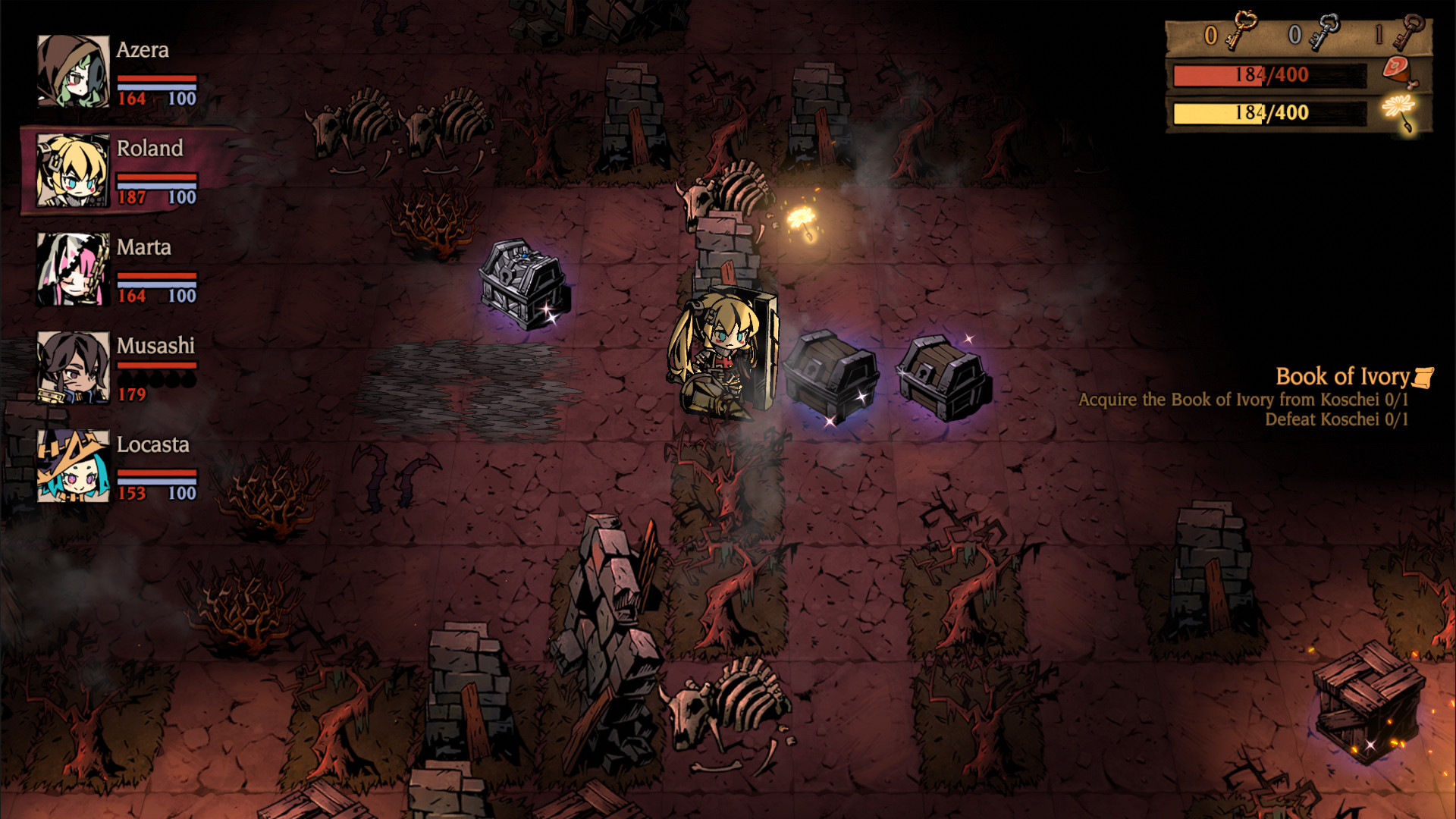 You probably played Mistover, about three years ago. That is, you likely experienced Darkest Dungeon’s disturbed, gothic world back in 2016 and to say Mistover tries to hop onto Red Hook Studios’ blood-soaked bandwagon is an understatement.

KRAFTON, Inc. have crippled themselves here by making a game so similar to Darkest Dungeon it’s hard not to compare the two – more so than you would other games. It doesn’t take inspiration; rather it feels more like a carbon copy of the macabre, stress management simulator. Any slither of uniqueness in Mistover is largely overshadowed by its lack of execution of systems Darkest Dungeon got right, which is a shame, as Mistover has a couple of cool ideas.

After a generic, anime-styled intro (which includes being rescued from some monsters and revealing you character has exposition-helping amnesia) you’ll be greeted with a hub town incredibly similar to Darkest Dungeon’s Hamlet. It’s almost as dank and dreary, except Mistover’s town is a coastal one and therefore has a pebble beach – in case you wanted a paddle. Although you might want to keep those leggings on as there’s a large chunk of ominous mist hanging around.

From this hub world you’ll start to poke around a few locations which expand during your first few missions and are what you’d expect to see from an RPG: a shopkeeper, a quest giver, weapon-enchanter, skill increaser and, my favourite, a soldier recruiting agency run by a knight captain called Mark. There are a few others but they’re not as interesting as military-man Mark. This area will become your place of respite and preparation before tackling the monsters in the dreaded mist. 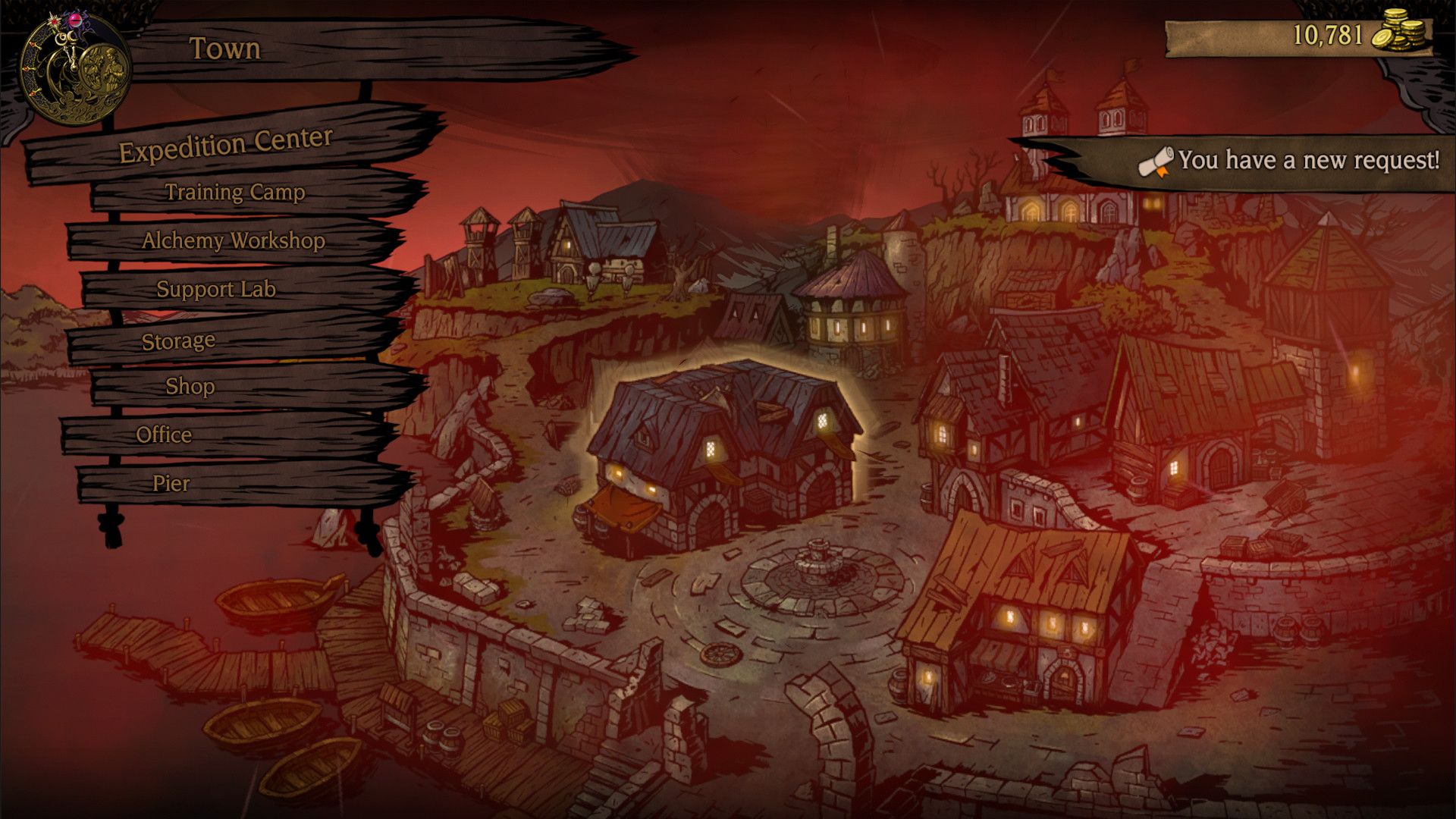 The mist has enveloped everything in sight and wants to continue its trend so the people of the world need a group of heroes to save the day – cue you. As you build up an entourage of traditional western fantasy meets Japanese-inspired combatants – from paladins and witches to ronin and onmyoji –  you’re tasked with entering, exploring and plundering a plethora of procedurally-generated dungeons within five different regions.

Dungeons deliver rewards based on their size. As soon as you take your first step in one of the dungeons, a mechanic will feel incredibly familiar. Greeted with a top-down view, it feels like a cross between a board game and an old-school JRPG, every step you take (but not breath) costs ‘fullness’ (hunger) and ‘luminosity’ (light). When your fullness runs out every step will drain your party’s health and with less luminosity, it gets harder to see enemies and items. Recharging these usually costs resources but some flowers can be found during the dungeon which recharge your luminosity.

For the most part, the system works smoothly and is easy to grasp as you calculate the most efficient way to find chests or evade monsters (who’ll track you down and hide in bushes). It’s one of the things which separates itself from Darkest Dungeon and one which I prefer. While Darkest Dungeon felt like you were constantly being surprised, Mistover allows you to tackle the map with a bit of strategy. Several monsters around, hide in a bush and wait, but be careful you don’t wait too long! 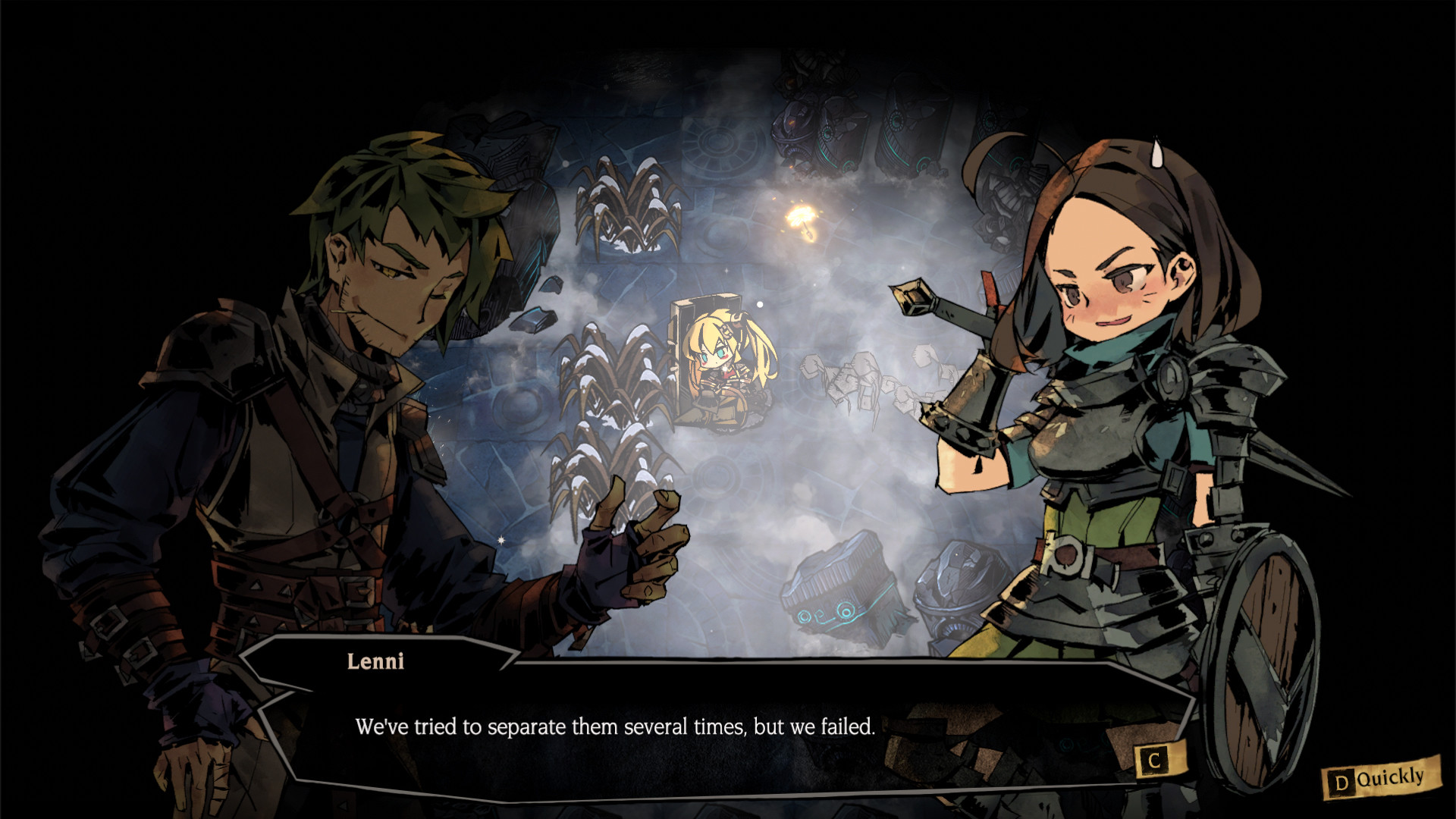 Mistover’s combat is a nice enough twist on turn-based combat. Each encounter with a horde of enemies will take place on a nine-by-nine grid for you and an identical one for the enemies, the difference largely being numbers, as you’ll have five characters while there may be more or fewer on the enemies’ squares. Aside from the usual deal with turn-based combat – you do a thing, then the enemy does a thing – Mistover works with positions. Certain characters will be able to use specific abilities depending on what column they’re in or who’s next to them. Sound familiar?

It may seem unfair to poke holes into Mistover for using a lot of Darkest Dungeon’s mechanics (let’s be clear, none of them are particularly original, either) but when you see the art style of Mistover and the animations of attacks, it’s almost identical. Which is a huge shame as the artists clearly know what they’re doing, it all looks great, but it’s already been done.

However, there’s one thing which is brilliant. The Doomsday Clock.

Depending on how thoroughly you scour a dungeon (open all of the chests, kill monsters, light the flowers etc.), the Doomsday Clock will either move clockwise or counterclockwise. The clock acts as an end-game state; if the clock reaches midnight, it’s over. It ends up being a nagging feeling at the back of your mind: if you’ve bitten off more than you can chew in a dungeon and one of your party members die (permadeath is a thing in this game) rather than hightail your way out of there, you may end up staying longer just to stop the clock from moving too rapidly. Although, this is slightly undone by the fact that if you do let the clock hit 12 and fail (which you may do as it is difficult) you’ll have to make your way through the same dialogue again and again, which isn’t fun.

There are a few great ideas in this game to take Darkest Dungeon’s format and improve upon it but instead, Mistover flounders in its wake, trying desperately to grasp at a market which will find it lacklustre.