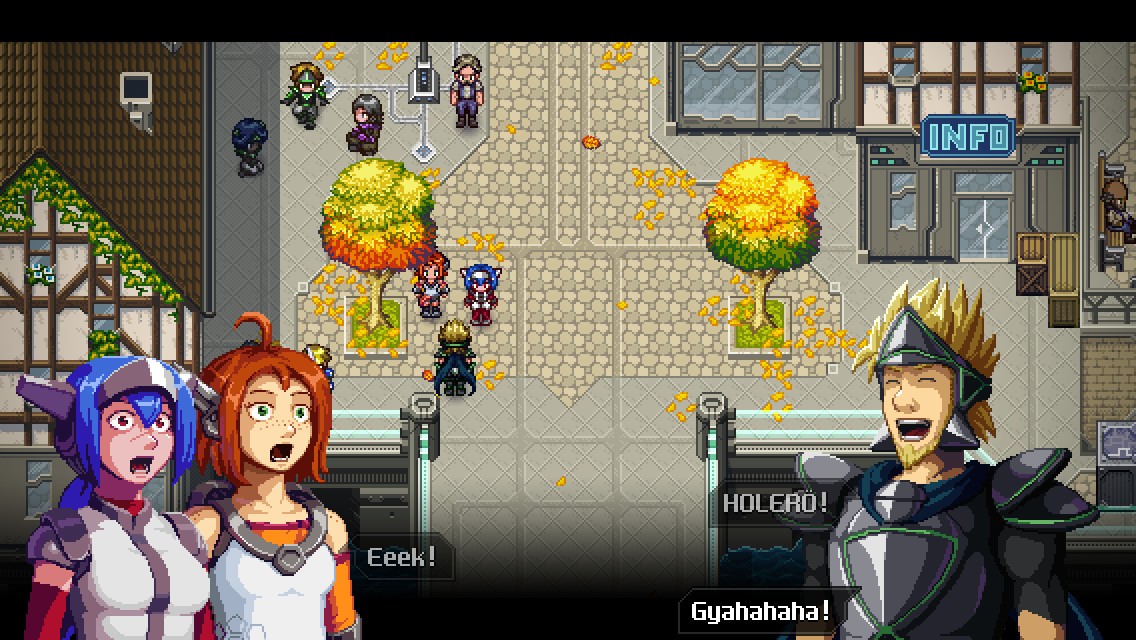 CrossCode has perhaps one of the most attractive opening menu screens that I have ever come across. The protagonist, Lea, looks out at a setting saturated in a deep, lapis lazuli blue. This, combined with the lovely theme tune (composed by Deniz Akbulut) make for a peaceful, soothing atmosphere. This pleasant handling of aesthetics is also on display during the actual game. You travel through a colourful area reminiscent of Stardew Valley, at another point a chilly mountain area with meditative people, a desert with a bazaar, etc. Character portraits are also well-designed and communicate all sorts of emotions during dialogue, particularly in regards to Lea, who can be bashful, resigned, and even deeply unsettled in one particularly affecting scene. The soundtrack has character and seems influenced by past great works — one languid track reminded me of the Costa Del Sol theme in Final Fantasy VII, while another gave me Chrono Trigger vibes.

Gameplay is actually more complex than I expected. I suppose I was thinking of a classic turn-based RPG in the style of the older Final Fantasy games, but CrossCode plays very differently. You move using the left analogue stick (you cannot switch to the d-pad) while the right analogue stick is used for aiming, with the R button for firing. The L button, tapped while moving, will result in you spinning to the side to evade incoming attacks. There are other things to consider too, like holding the B button, which will put a shield up for you, or holding down ZR, which allows you to use a charged attack. The combination of all these factors can be troublesome — at times, my hand began to cramp up, although I suspect that this is more my issue and won’t become a problem for most of you. 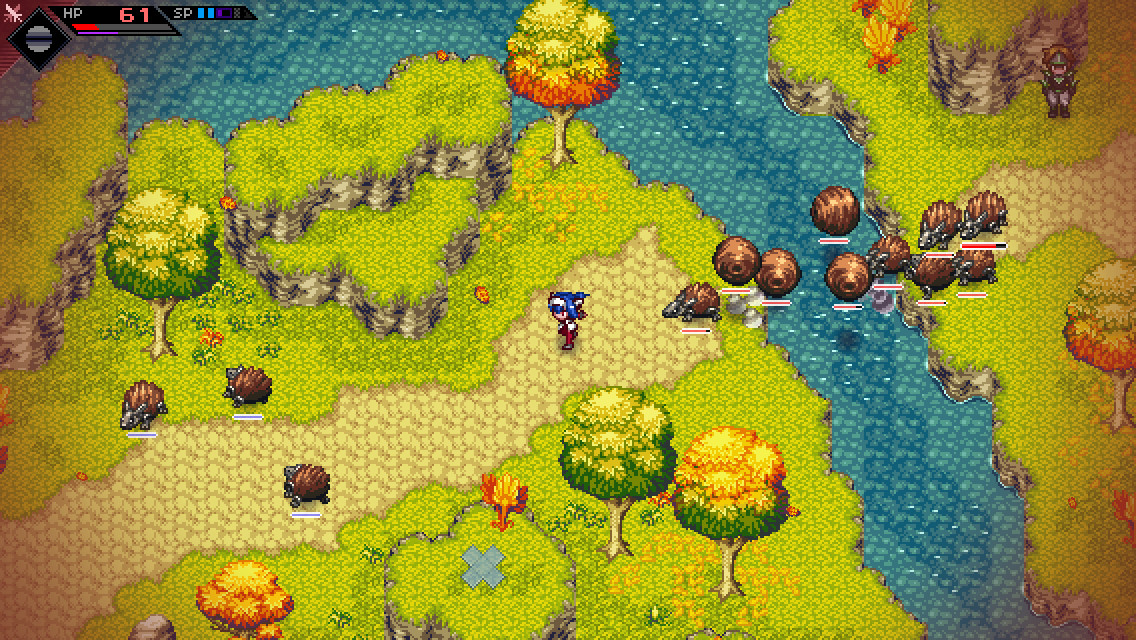 The game also gives you the ability to jump, and makes use of it to a significant degree throughout — at times it almost felt like I was platforming as I bounced from one pillar to another, trying to be as delicate as possible. As bothersome as it can sometimes be to keep falling, it actually works very well in practice, and if you take the time to jump around, you’ll often get a lot of good items as a result.

Another, more interesting feature is the ability to ricochet spheres by aiming and shooting them at objects. This makes for all sorts of scenarios where, in order to reach something like a lever, you have to aim and calculate where the sphere will bounce in order to hit your target — it’s not as tricky as it sounds, as the game gives you an indicator of the angle the sphere will go. Again, this can be frustrating, but it’s also employed well. The game as a whole runs well, although there are some odd delays sometimes when you access areas within the menu. A more serious issue was that I crashed more than once trying to enter the codex-type section of the menu, which is something that I hope will be patched.

The tallest of tales 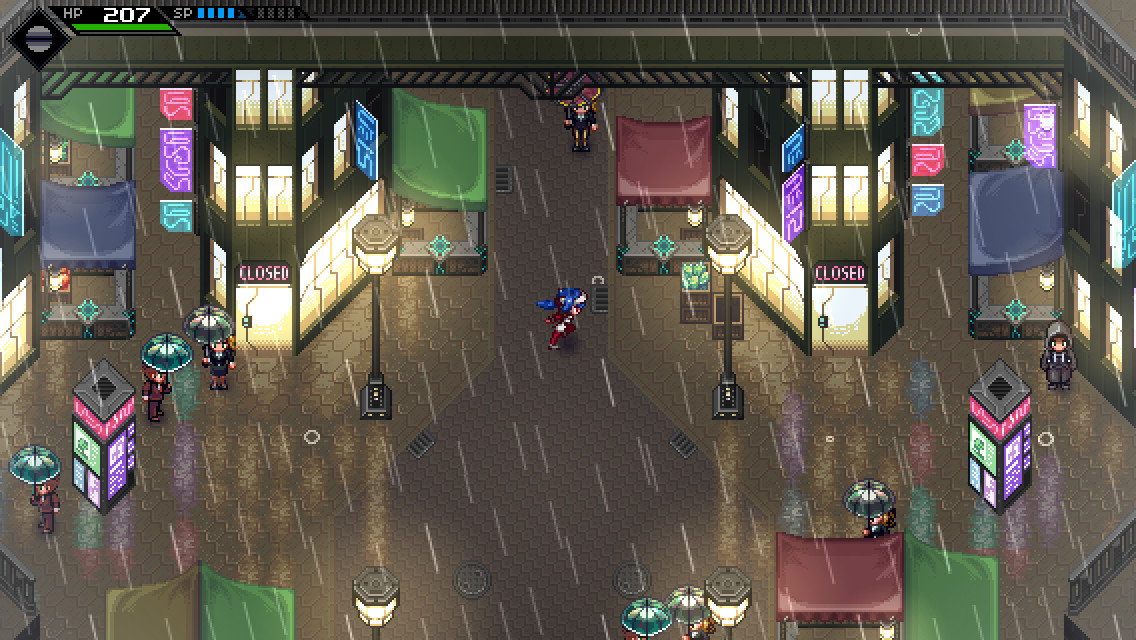 Now to get to the elephant in the room — the narrative. I will be completely honest here, as I feel it is crucial to point out that I have yet to actually finish the game, and thus I can give no real evaluation of the story as a whole. What I can do, however, is give you my assessment of the material that I actually did see. For as enjoyable and pretty as CrossCode is, I didn’t feel an emotional investment in the characters and story until about fifteen hours into the game, when I finally got to a scene that gave me some interesting dramatic context. It feels like an unfortunate mistake to me, but again, I do not have the full context, so please keep that in mind.

The thing that makes the biggest impression on me, as I reflect on CrossCode, is the way it conjures up a sensation of size and, to use a term that the characters sometimes reference, ‘immersion’. I felt a little lost at times, wandering around the seemingly endless areas. You can join a guild, duel an irritating but strangely endearing player, direct message your friend, even set a ‘meeting point’, just as you would in an actual MMO, and go there to pick up your party member. It’s wonderful stuff.

I can easily recommend this game — it’s enjoyable, attractive, and fleshed out. I do think having to wait around fifteen hours for an emotional hook might be pushing it (especially if, like me, you love story and character), but again, this could change as you push into your sixteenth hour and beyond.

Bug Out In A Surreal World In Metamorphosis