Three is the magic number. 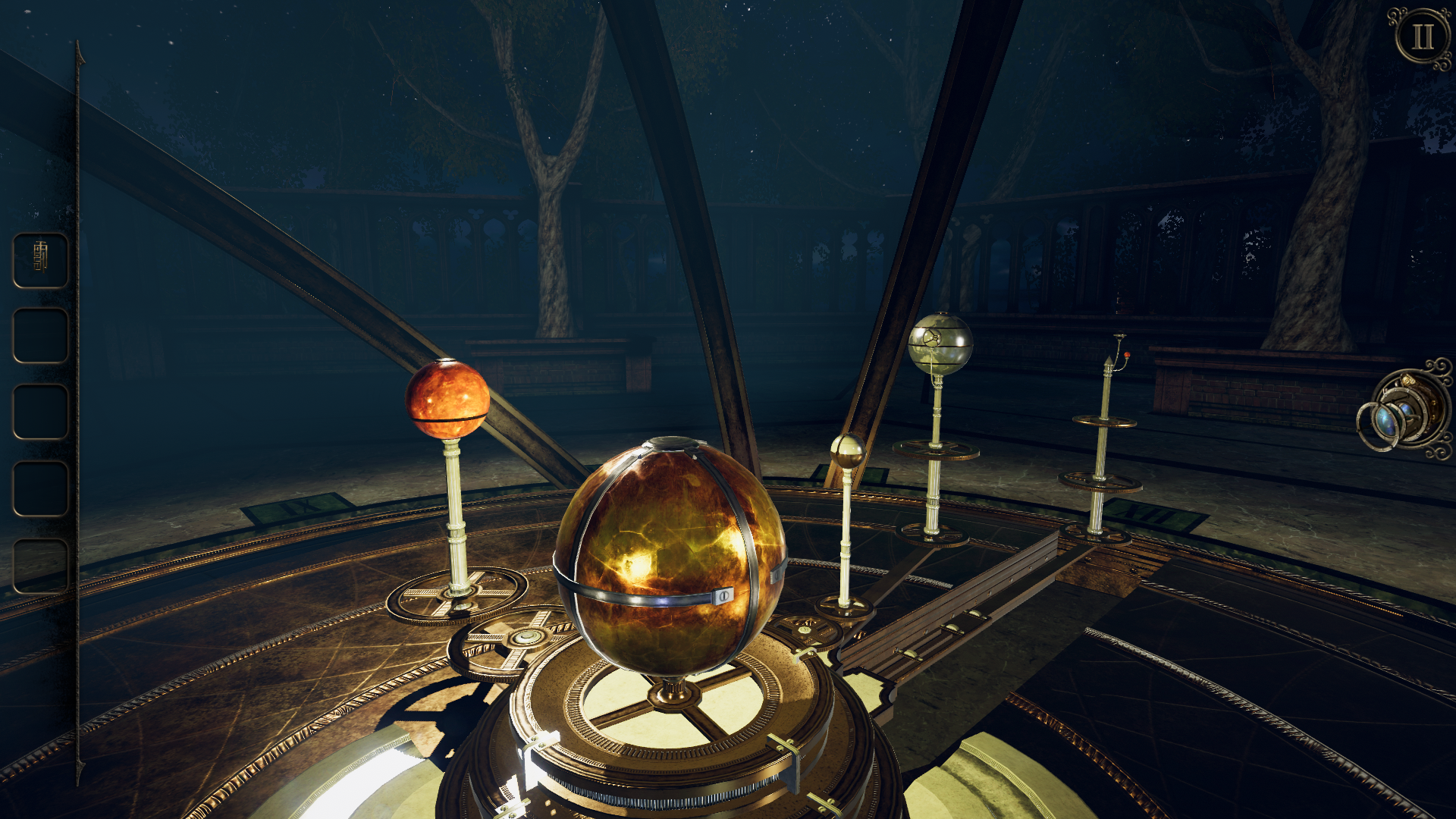 The Room Three isn’t a new game by any means. Originally released for Android and iOS in 2015, it went on to win a ‘Best Of’ award from the Apple App Store and snagged a BAFTA nomination as well, following in the footsteps of its prequels. However, this is the first time it’s ever looked this good.

As with The Room and The Room Two’s release on Steam, The Room Three’s art assets were totally overhauled for its big(ger) screen debut. According to developer Fireproof Games’ website, everything was “re-built, re-textured, and re-lit to bring the mysterious world of The Room to life.” Their work shows; The Room Three looks like a native PC title, complete with environments so expansive and meticulously detailed you’re impressed when you remember that it all used to fit in the palm of your hand. 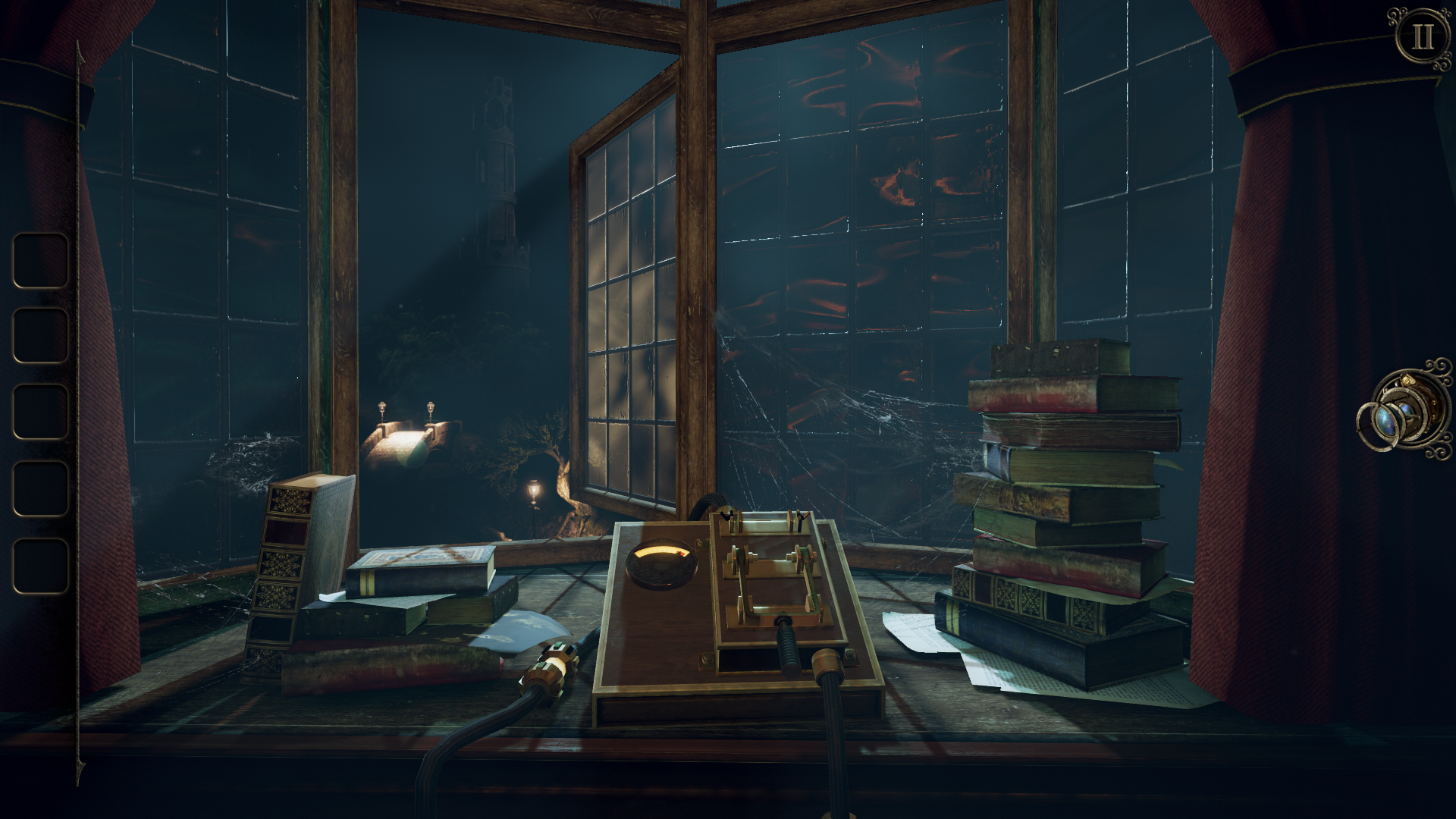 The Grey Holm, the mansion you’re magically spirited off during what appears to be an otherwise lovely train ride, seems untethered to time and space. All manner of turn-of-the-century electronica whirs and beeps in every thoroughly massive room and the stuffy, dour decor satisfied that part of me that loves to curl up with a gothic horror novel. No people walk the halls of the estate; it seems tailor-made for testing some unfortunate soul with an endless array of puzzles. And the game’s light on details as to why.

Sure, it attempts to spin a tale about some otherworldly force (the appropriately vague but spookily named ‘Null’) at the center of this all, as well as a mysterious Craftsman omnipotently pulling the strings behind all these tasks to test your worth, but the goal of each puzzle is so far removed from these central themes that it’s easy to see them for what they really are: just puzzles for their own sake.

The Room Three is committed to its story, though, I’ll give it that. Every room has an ominous note from this Craftsman, building anticipation into each leg of your journey like you’re slowly getting close to something big, and the game’s entire aesthetic hugs tight to its ethereal horror vibes. 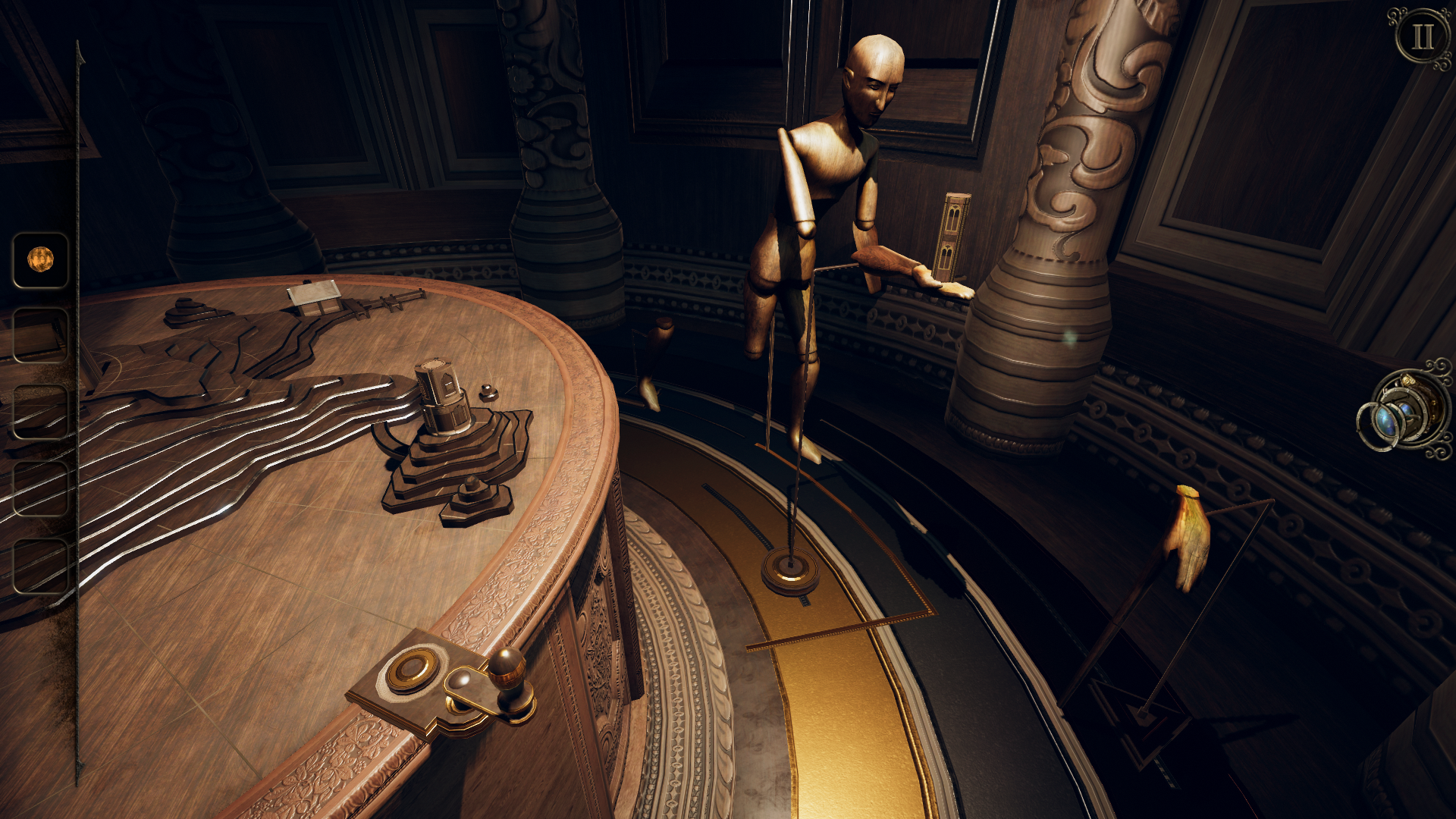 Gameplay segments nicely into four parts as you gather the pieces of the key to this Null, with each piece relegated to a wing of the mansion. You can tell The Room Three was originally meant to be played in spurts, as you’re given a prompt to continue or quit the game after each section. They also all begin in the same formulaic manner: trigger the power, flip some switches, open a portal. Unfortunately, these tasks have little variation, and worse, are required to get to the more complex puzzles. Completing them, again and again, feels like being forced to eat your broccoli before you can have your dessert.

The puzzles themselves mirror The Room’s prequels, just on a much larger scale, spanning multiple rooms and countless devices to poke and prod as you pick apart the mystery. While impressive, this occasionally tripped me up; it’s easy to forget about contraptions you used in the first room you were in when you’ve spent the last 20 minutes in two others just as packed with stuff to mess with, and several puzzles require you to backtrack extensively. The Room Three would have greatly benefited from a fast travel system in this sense, as the travel animations are tediously long and not the most fun thing to have to repeat.

However, it does feel satisfying to peel the rooms apart, layer by layer and puzzle box by puzzle box, as you slowly unravel the clues. Most rooms look significantly different by the end of a puzzle than they do at the beginning, adding to the sense of triumph and accomplishment. 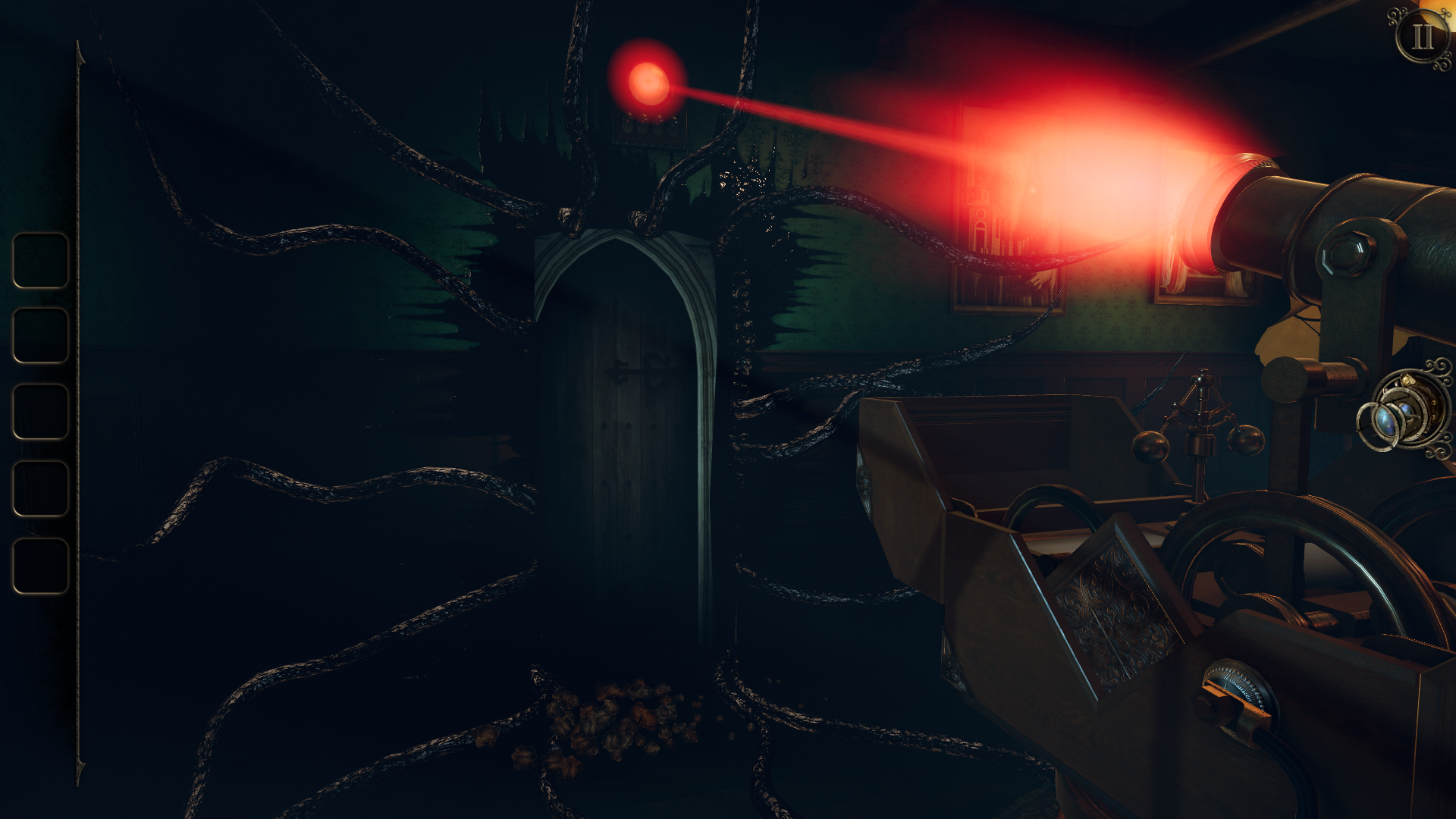 My favorite puzzle is one of the first you encounter: a scale model of the estate dominates nearly the entire room, and you unlock subsequent puzzles by building it out piece by piece yourself. An eyepiece ability unique to this iteration lets you defy the laws of physics and shrink down to a minuscule size so you can walk among the model’s ground as if it were the real thing. Shifting back and forth between these scales proved incredibly fun and shook up the formula established by previous The Rooms.

What I’ve always appreciated about The Room series is the ample availability of hints for when you get stuck, and you will get stuck at some point. Some are more helpful than others, as the game often refers to objects using antiquated vocabulary (how am I supposed to know what a “plinth” or an “orrery” is?) but just having that option in the corner of my screen felt comforting. Even if the notification does pop up with a condescending ‘ding,’ as if you’re taking too long to figure things out. 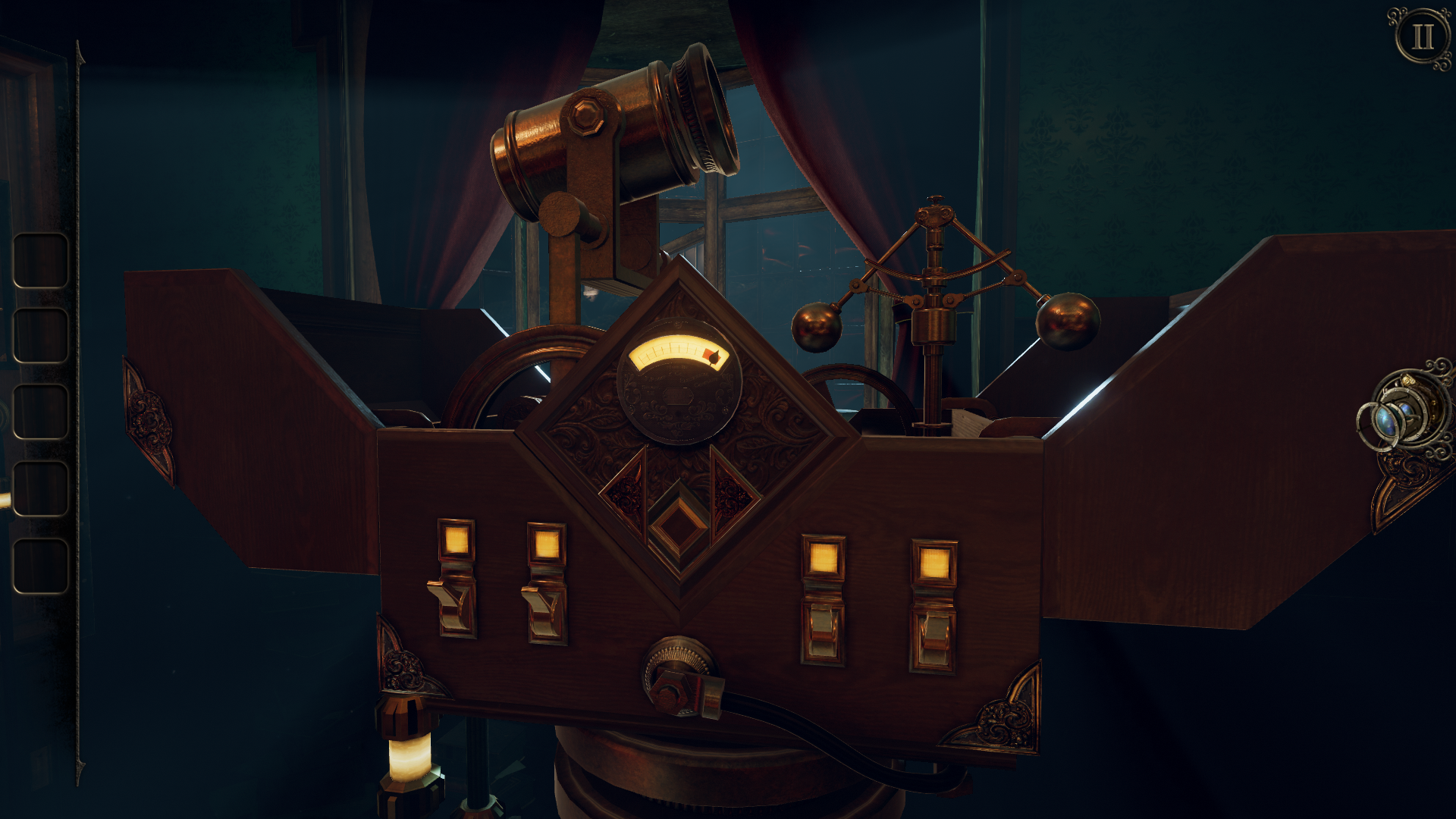 Though there are about six hours of gameplay, there are four distinct endings determined by a metagame tucked into the corners of the hub world. Hidden in the estate lie mysterious artefacts unrelated to the mechanics of the core puzzles, and figuring out their secrets unlocks these. Fail to find any, and, like me, you’re awarded the worst ending. Luckily you’re given the option to ‘change your fate’ and the game resets you to right before the final puzzle, so trying your hand at the other endings doesn’t require replaying the entire game.

As someone who’s only dabbled in The Room and The Room Two’s stories, this iteration proved much more enrapturing. The touch controls on mobile always felt imprecise to me and the screen too small to see all the necessary details to solving its complex puzzles. If you enjoy puzzle games and you’ve been curious about the series, its PC ports are the way to go, and The Room Three, in particular, offers the most expansive experience of the three.

Alyse is a freelance games and tech writer desperately in need of some sleep. They are definitely NOT three gremlins in a trenchcoat, despite what you may have heard.