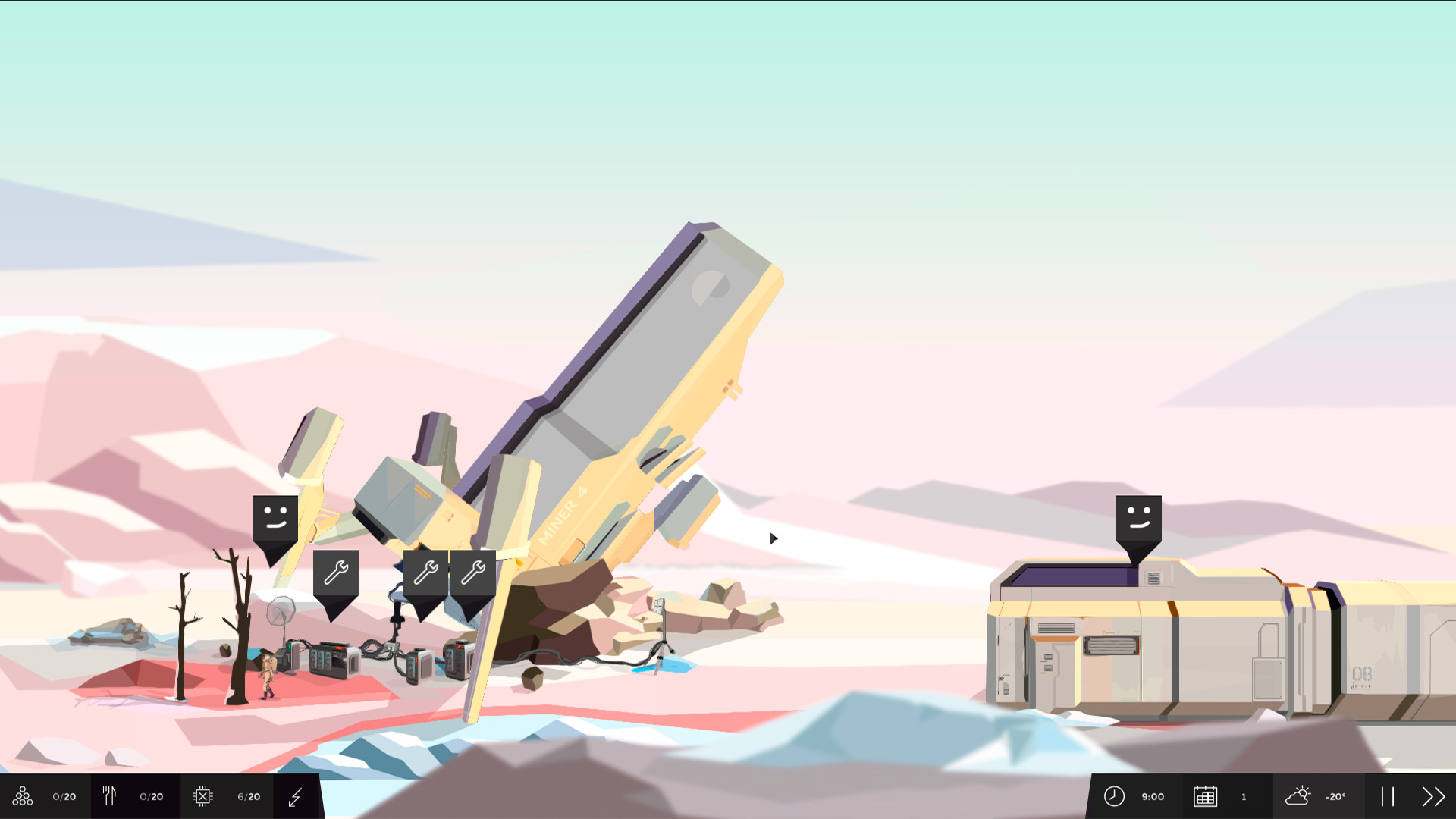 I’m less than one hour into my first playthrough of Symmetry and everyone is dead. On the screen a line of bloodied footprints drifts through the snow and I am sent back to the menu screen to start all over again. In this short experiment two crewmembers were cannibalised, the power station broke down more times than you can scream ‘it’s post-apocalyptic outside’ and one crewmember froze to death inside the station. I feel like a very bad omnipresent space Mum, and with this guilt humming at the back of my head, I click ‘New Game’.

As you may have guessed, Symmetry is a survival management simulator with a sci-fi horror punch. Its narrative centres around a research crew who have crashed on a seemingly abandoned world. The game is a race to collect enough parts to repair your ship before the planet starts to take matters of your demise into its own hands.

You begin with three crewmembers – survivors of the initial crash – all of whom arrive with varying levels of skill in three areas: creating food, chopping wood for fuel and gathering waste electrical parts for repairs. In each playthrough your starting characters are a different cast, and so with every new attempt a subtle change of tactics is needed. 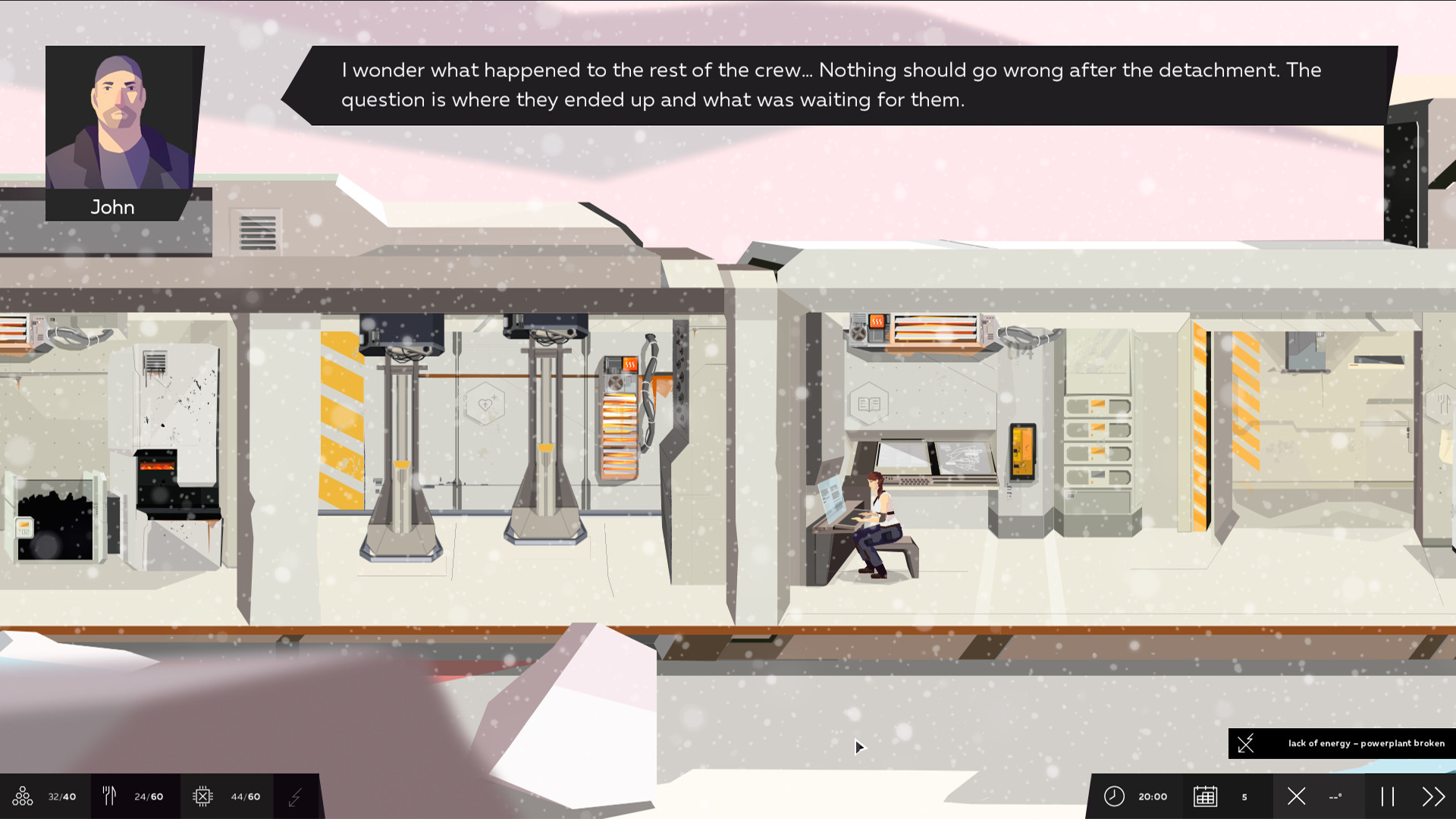 Like most survival simulators, this is predominantly an exercise in trial and error. The mechanics are deceptively simple but balancing your protagonists’ survival is no walk in the wasteland, and it takes failing multiple times to really get to know how this game ticks.

In its early stages, Symmetry eases you in gently. Both wood and electronic waste can be found near to the station, and the weather is good if, I imagine, a little brisk. Sending out your crew takes away very little health and everything in the station works fine. It gets to the stage where you want to kick your space boots back, believing life isn’t so bad! This doesn’t last. Once nearby resources are used up, it takes longer and longer trips to find more and the weather doesn’t stay bright for long.

As well as getting to grips with the difficulty, the camera is also designed to make things tricky. When assigned a task, the rather robotic individuals will mindlessly continue until they die. Thus, each cast member needs to be watched carefully. With only two limited options for the camera, it is difficult to keep track of them all at once, especially when additional survivors join later down the line. 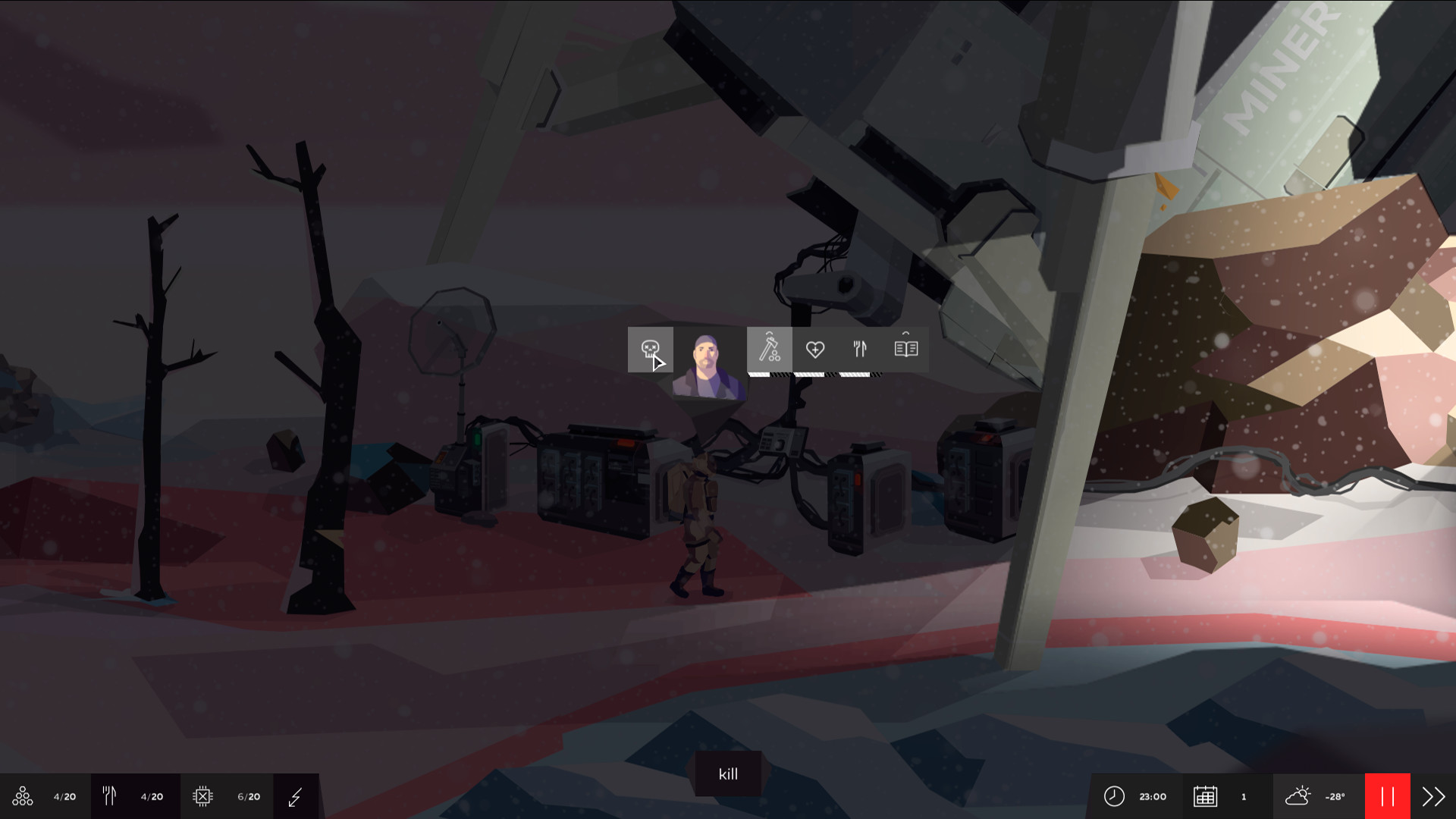 While the men and women go about their tasks, snippets of narrative appear on the screen to fill the player in on who these people are and why they were sent to this planet. All are disorientated from their crash and are questioning why they’re on this particular planet to start with. Thankfully, each character has a distinctive voice and their own stories to tell. Their dialogue doesn’t appear too often, but when it does, it’s a welcome break from the repetition of scrolling from side to side.

As the hours slip past, the crewmembers must be on a constant rotation of gathering fuel and parts, making food, resting and levelling up their skills. However, it soon becomes clear that Symmetry isn’t about keeping your characters comfortable, but gathering enough parts to enable them to leave. Every choice is a gamble, and whether or not it pays off often seems down to luck rather than tactics. Even so, watching a character walk slowly towards the rejuvenating capsules that restore health, wondering if they’ll end up as dinner instead, can be quite gripping.

There are points at which the game lends you a helping hand. In the beginning, our first cast increasingly gets transmissions from glitching figures who are searching for the base. When these members eventually arrive, the extra pair of hands is both a help and a hindrance – more people to worry about, but more bodies to throw outside to collect parts. The addition of new voices and eerie observations of the planet is refreshing, as the game’s narrative does start to dwindle toward the end of the game. 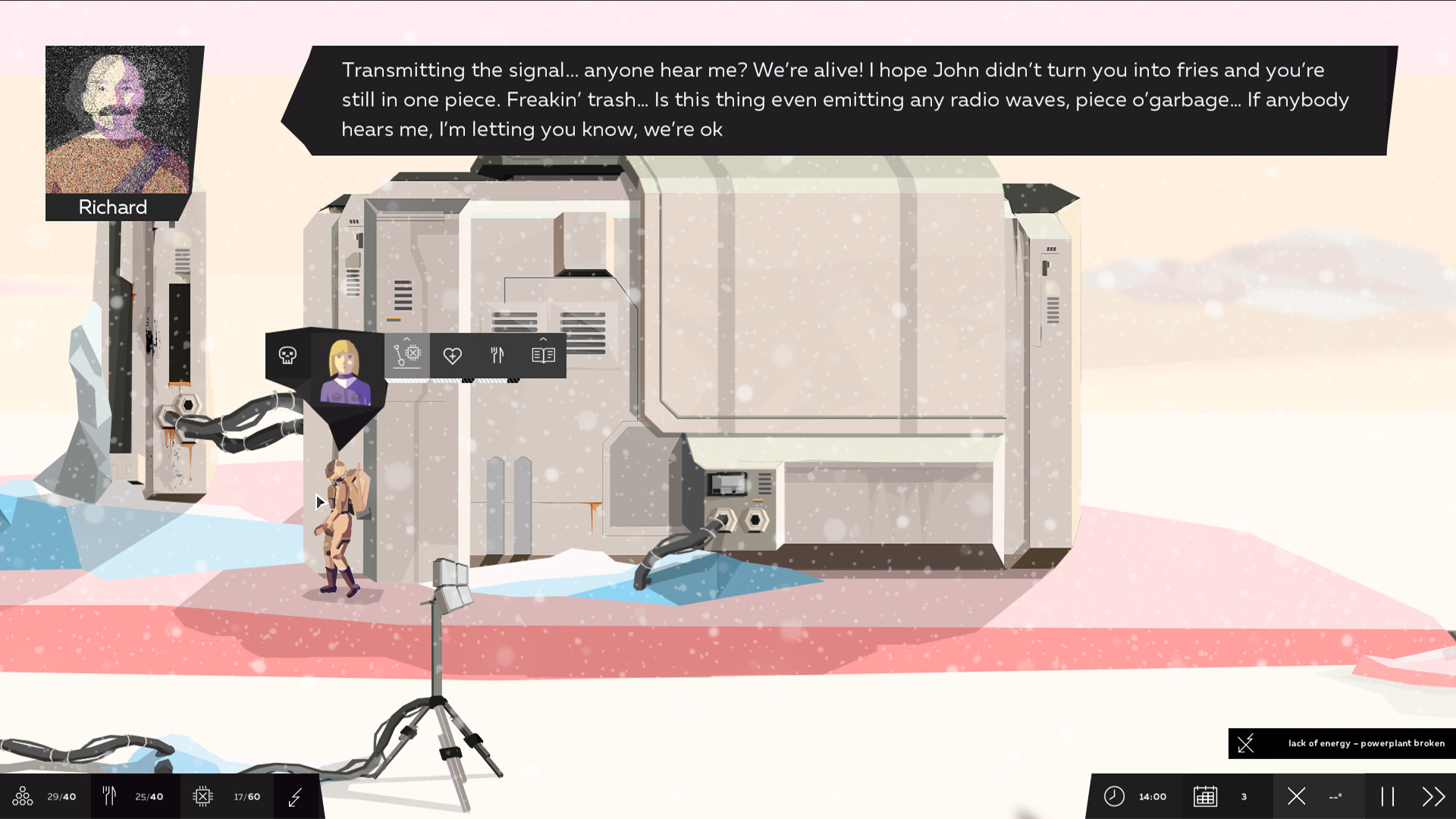 The frequent ‘glitches’ that litter the game are what makes it feel unique. Sometimes mirages of a past existence and sometimes horrific visions of what is to come, these images ramp up the suspense tenfold. The game faces you with dead and bleeding figures, an impaled spaceman and a figure hanging by the lumber, haunting the sparse landscape and acting as a chilling accompaniment to any journey outside the base.

When you’ll inevitably have to start the game again, being able to spot the glitches you may have missed and spending more time in this world is some consolation. The artwork, along with the eerie soundtrack, ensure that Symmetry is always atmospheric, keeping you guessing as to what might happen next. This dangerous planet may be a death trap, but it sure is beautiful.

Since its release, Sleepless Clinic have listened to players’ laments that the game is just too difficult and have added a ‘normal’ play mode. Yet, be warned, while this mode makes this very challenging game a lot easier, some of the pleasure of Symmetry is lost too. So much of this game is about balancing on the knife edge of survival and without a serious threat of total failure, Symmetry really is just clicking and scrolling in space.

With this harder difficulty level, Symmetry becomes more than just its basic mechanics; it gets into your head. Addictive and atmospheric in equal measure, you’ll even grow attached to the full-grown space toddlers that you control. It’s not for the easily distracted, but if you love a challenge, it’s certainly for you.