A fantastic slice of joy.

A fantastic slice of joy. 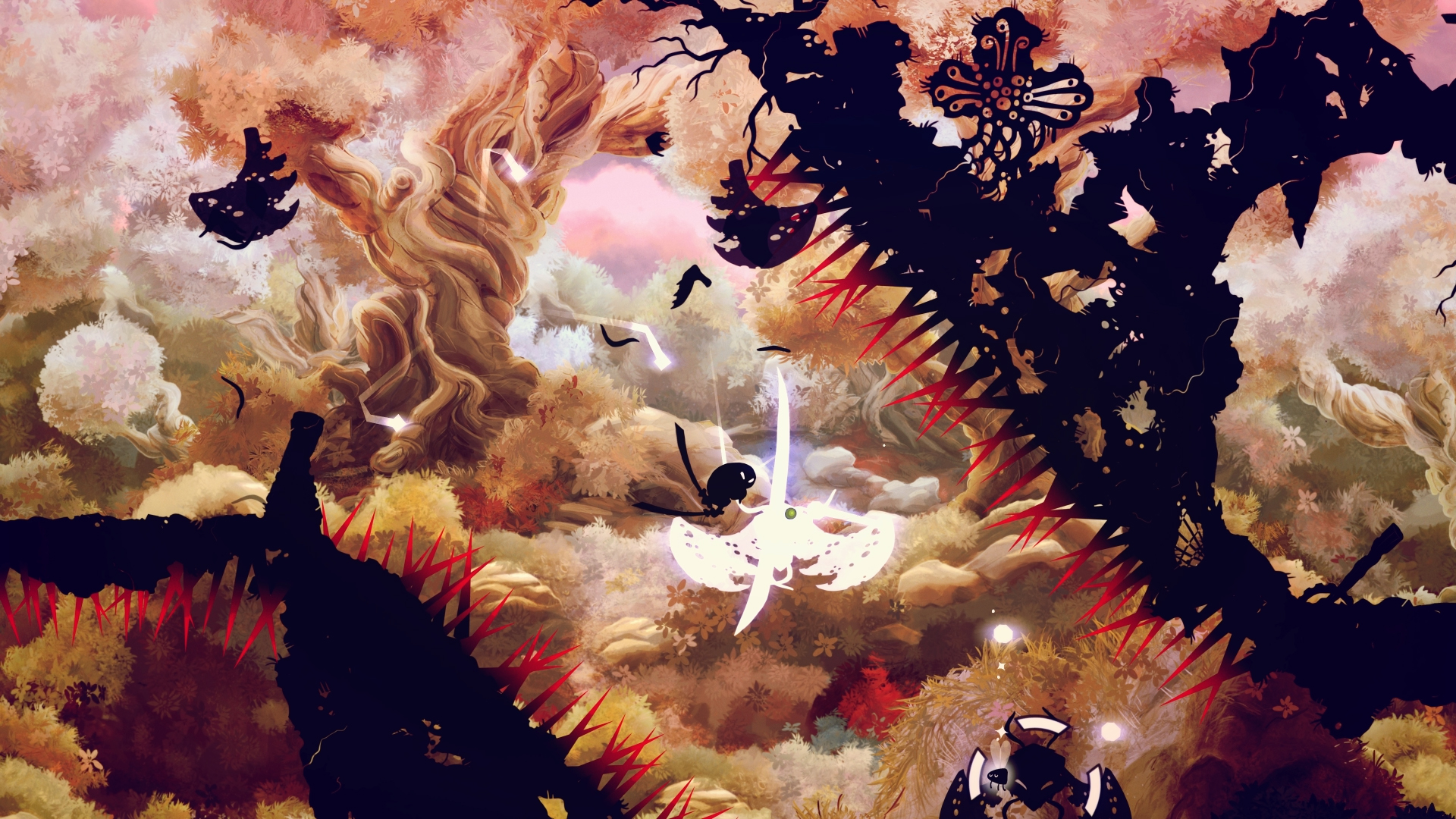 The mantra for Shadow Bug is a rhythmic one: Slice, fall, aim, dash and slice again. Within minutes of playing you’ll be hypnotised within its simple, controlled and delightfully fun systems.

Muro Studios’ debut on the Nintendo Switch (after initially launching on Android two years ago and Steam a year later) is a solid start for the studio, as its 2D platformer Shadow Bug fits snugly and naturally on the device. Aiming the Joy-Cons at screen or using your fingers on the touchscreen, you control a dual katana-wielding black ball of death which flits from enemy to enemy, cutting across the screen.

Using enemies as the main form of traversal, you’ll aim and spring your decimating, fluffy blackberry into their face, quickly dispatching enemies from existence as you search for your next target to shoot towards, all the while progressing throughout the level. The foes are integral into moving through the level, and having them so intertwined is a piece of brilliant design. Rather than things you’ll want to avoid, they’re creatures to be manipulated as you time kills perfectly, ending up with a chain of murder as you fly from creature to creature. Or, you know, completely mess it up and die.

Shadow Bug revels in a one-hit kill system. If you take damage, you die. However, apart from bosses, the enemies suffer the same vulnerability. This adds its own challenges as you work enemies’ respawn timers into your platforming throughout the two-three hour experience.  During this short time span you’ll have created several murder chains and they all feel oh-so-good. The speed at which you dart through walls, ceilings and obstacles to cut apart enemies gives it a fluidity and cohesiveness which is paralleled by only a handful of platformers. From the start, Shadow Bug encourages you to stay airborne and asks you to be clever with your angles before you slingshot into enemies.

As you progress through Shadow Bug being airborne gradually switches over the 37 missions from a spare, enjoyable challenge to a skill which is needed as the levels start to test your reactions and ability. It must be said, Shadow Bug is one of the best-paced platformers out there. It continually introduces new puzzles, traps and trials while raising its difficulty naturally. There are levels which are hard, but none of them feel unfair, which works well with a generous checkpoint system. 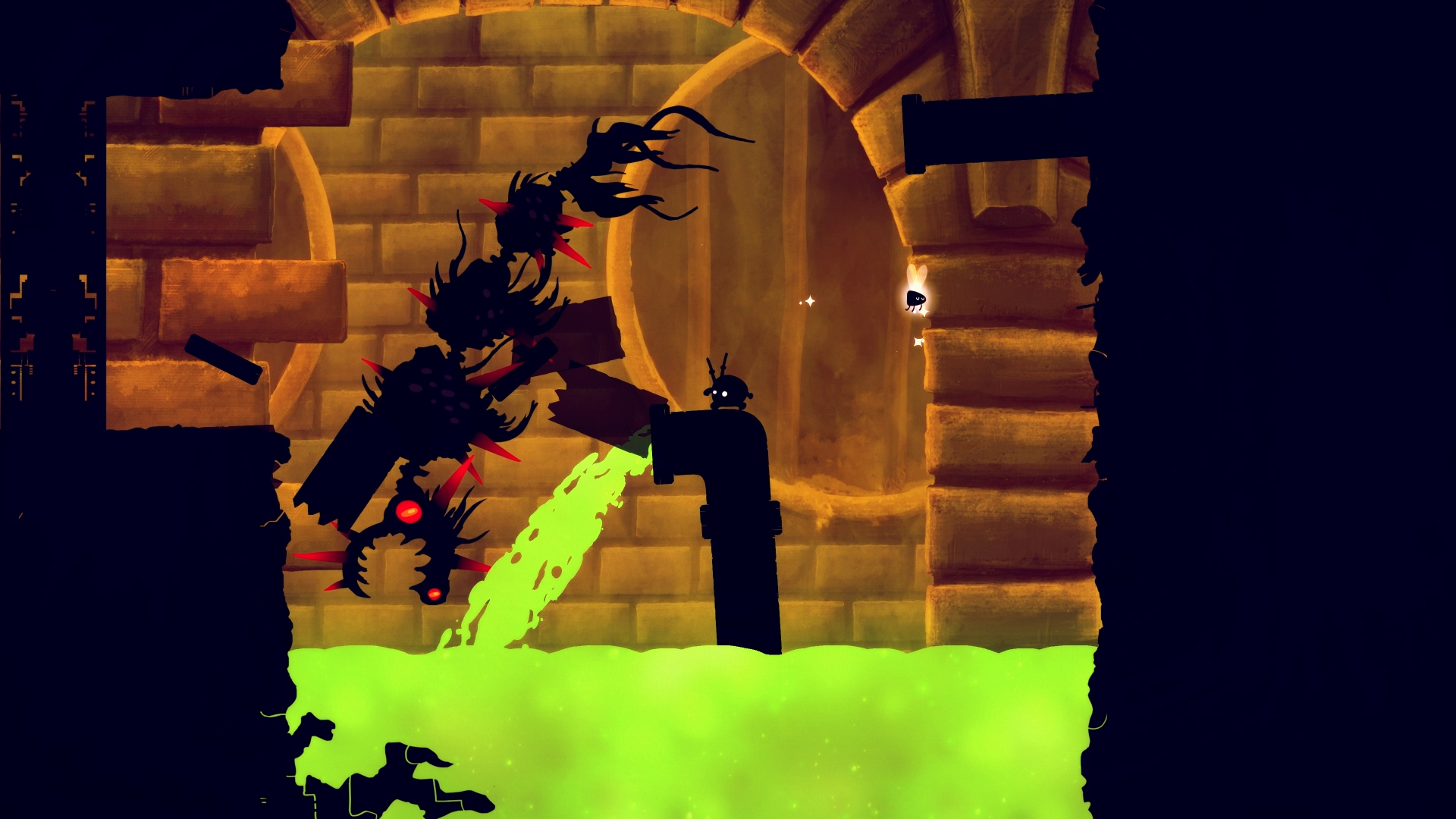 While the difficulty is manageable, don’t lose faith if you like tough challenges. For those out there who like to beat time trials, set high scores and find collectibles, Shadow Bug offers these as well. While nothing more than an encouraging carrot, prompting those who are interested to master the game a bit more, the time trials goad a bit more efficiency out of you.

The difficulty curve is almost as elegant as the game’s style. Almost.

Shadow Bug looks great. Bloody great. It’s easy to draw similarities between it and Frogmind’s Badland with a similar aesthetic of the synthetic taking over nature. Both games have the protagonist and enemies displayed as silhouettes in front of a gorgeous background. This means you can admire the beauty without being distracted from the game at hand.

You wouldn’t want the music to distract you either, and it doesn’t. The score is upbeat, tense and produces a synthetic tone which grabs your attention and helps focus your senses. It emphasises a Japanese theme within the game while simultaneously focusing on the destruction of nature by manufactured monsters.

It’s hard to pick faults with Shadow Bug. It nails what it sets out to do. The only issues which could put people off are the slightly awkward controls. Pointing the Joy-Cons at the screen will often lose their centering but Muro Studios have countered it with a quick button which centers easily. The touchscreen method is a bit worse-off, as anyone with Trump-sized hands may have trouble unnaturally stretching their digits across the Joy-Cons onto the screen. Removing the Joy-Cons from the system remedies this but then makes it slightly weird to hold. It only takes a little bit of time to get used to, though.

There’s nothing revolutionary about Shadow Bug but what it does is build on systems decades old whilst managing to bring enough freshness and a feeling of fluid prowess many games of the same ilk struggle to create. The developers should be proud of the lovingly fun experience they have created.