5 of The Strangest Parody Games Online

There are some proper interesting vamps on popular media out there…

There are some proper interesting vamps on popular media out there… 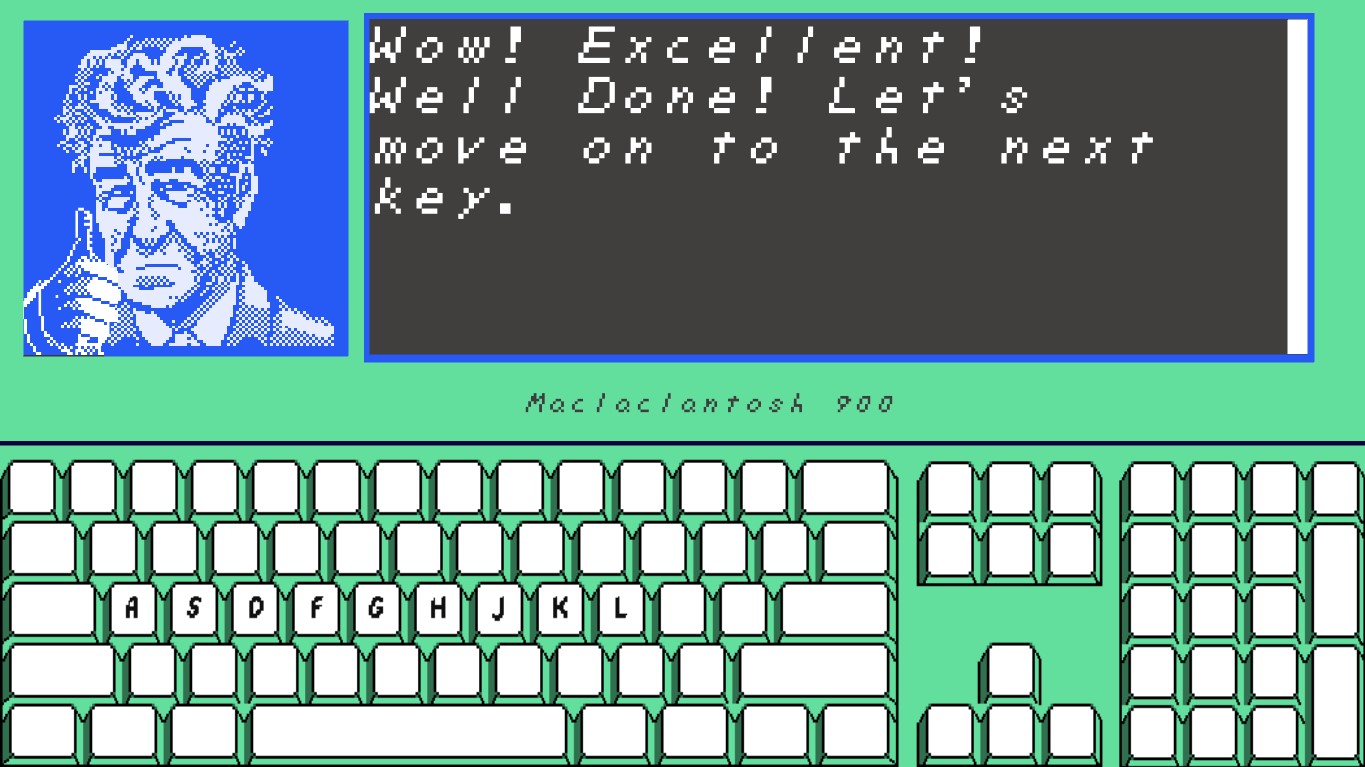 Sometimes just watching a show or reading a book isn’t enough for the most devoted of fans. It’s certainly not uncommon for fans of a franchise to show their appreciation with their own talents, with fan-fiction or artwork. Both of these are often amazing- I personally believe that for every Tara Gilesbie or “Laura” there are ten genuinely talented individuals who show their love through their art.

With gaming being the greatest new art form of our generation, it’s understandable that amateur game makers would show their appreciation the best way they know how- with parody games! By that, I mean games created by fans using characters or settings from a popular existing fandom. Whether this is a good or a bad thing is entirely up to you.

All of these parody games are free to play or name your own price on itch.io.

3Am At The Krusty Krab – Dave Microwaves Games 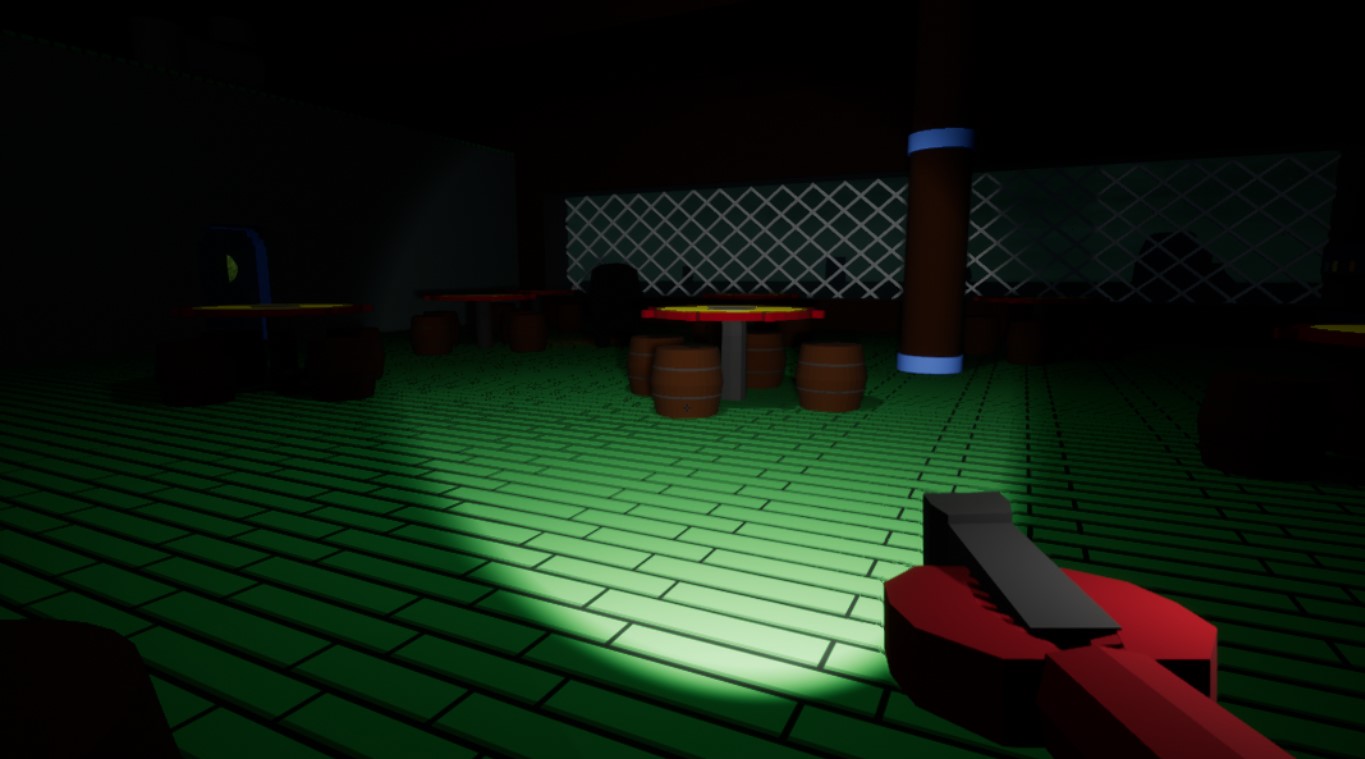 Although SpongeBob can be an incredibly disturbing show at times, it always surprises me how dark some of it’s fans can go with their creepypastas, fan art and stories. While this game certainly isn’t as dark as some of the SpongeBob fan creations out there, it did creep me out just a little bit.

The distorted sea shanty when you load the game is enough to set the atmosphere and to let you know what you should expect. You play as Mr Krabs who is counting his money in his office before closing the Krusty Krab for the day. However, The Hash Slinging Slasher takes the bus to the restaurant and breaks in to get you. Now you must finish your closing tasks, whilst sneaking around and avoiding him, lest he catch and kill you!

“Dave” states firmly in their description of the game that “this is nothing like Five Nights at Freddie’s if that’s what you’re thinking” – and I would agree with that. It’s not quite as brutal as FNAF. If you think the Hash Slash is going to catch you (the game will warn you), then you can either hide or barricade yourself in your office, rather than sit there and wait for your doom. Although I don’t know why Mr Krabs doesn’t just hide sobbing in his office until morning, or calls the police, but I guess we’re very different people.

It’s quite a scary game and even though I’m not a huge SpongeBob fan myself I certainly enjoyed playing it. 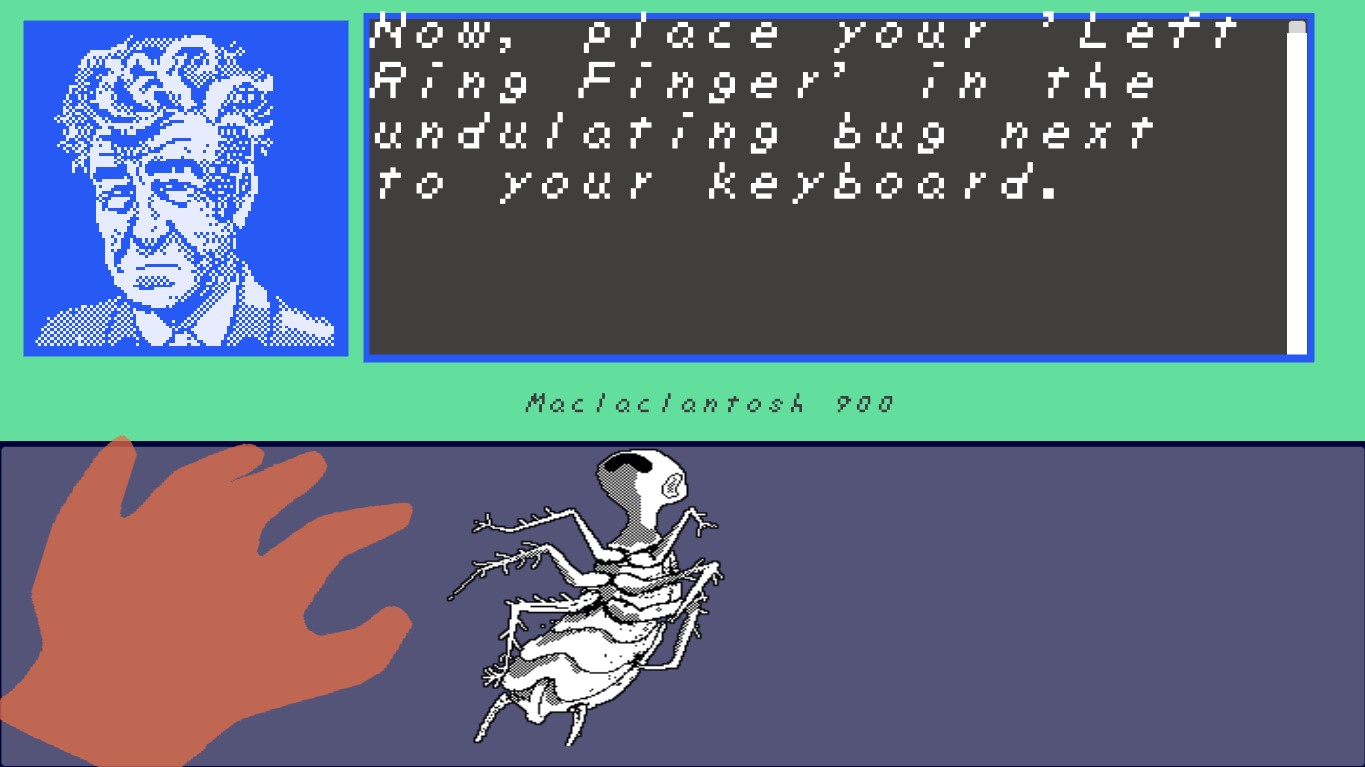 I still remember at Primary School when we were forced to take typing lessons, using some weird program with Vikings (because if there is someone we can count on to be the best at typing, it’s the Vikings.) But I know I should be more grateful for the typing lessons, given that there are probably more people who wished they had taken them at school.

For those of you who didn’t take typing lessons, but wish they did, I probably wouldn’t be recommending David Lynch Teaches Typing.

Anyone who’s heard of David Lynch or seen any of his films will be expecting a little bit more from this project and they wouldn’t be disappointed. While it starts out like a normal typing tutor, explaining everything step-by-step like you’ve never seen a keyboard before. Mr Lynch starts off as a very encouraging teacher, using lots of positive language and praising you. But this doesn’t carry on for long. Things start to bug out and you’re forced to witness some disturbing film footage, you probably didn’t sign up for.

I would describe this as more of an art installation than a game. There isn’t much play going on and not a lot the player can do about what’s happening to them. Certainly, play it if you’re curious, but be prepared! 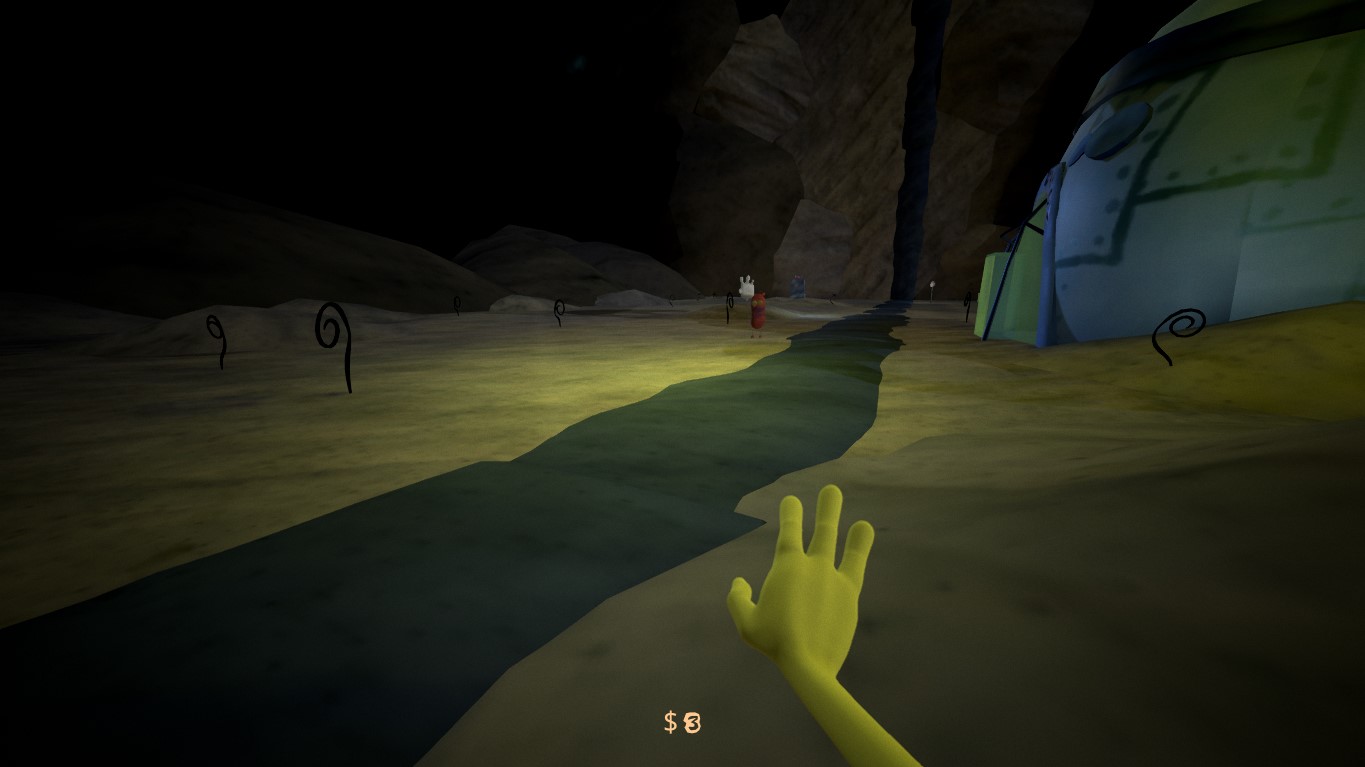 Here we are back in the magical world of SpongeBob!

This game is quite similar to 3 Am at the Krusty Krab. In this game, you play as SpongeBob and you just want to get home! You’ve somehow found yourself at Rock Bottom without the nine dollars you need for the bus ride home. You must venture outside the bus shelter to find various items totally the amount of nine dollars that you can use to make your way back.

However, while venturing outside to collect the items you are relentlessly stalked by a creepy angler fish who wants to see you destroyed. He can’t get you while you’re inside the bus shelter, so if he gets close try and make it inside. It’s quite a suspenseful game and I actually got really creeped out whenever the anglerfish got close. It’s a listen-to-the-music kind of horror game, so be sure to have your sound on while playing.

The items are scattered around the area at random, so you can’t plan your route before playing the game. It’s certainly a bit more forgivable than 3 Am at the Krusty Krab since SpongeBob is facing the anglerfish so that he can get home. Although I would personally prefer to cower in the bus shelter all night and watch the TV in there. 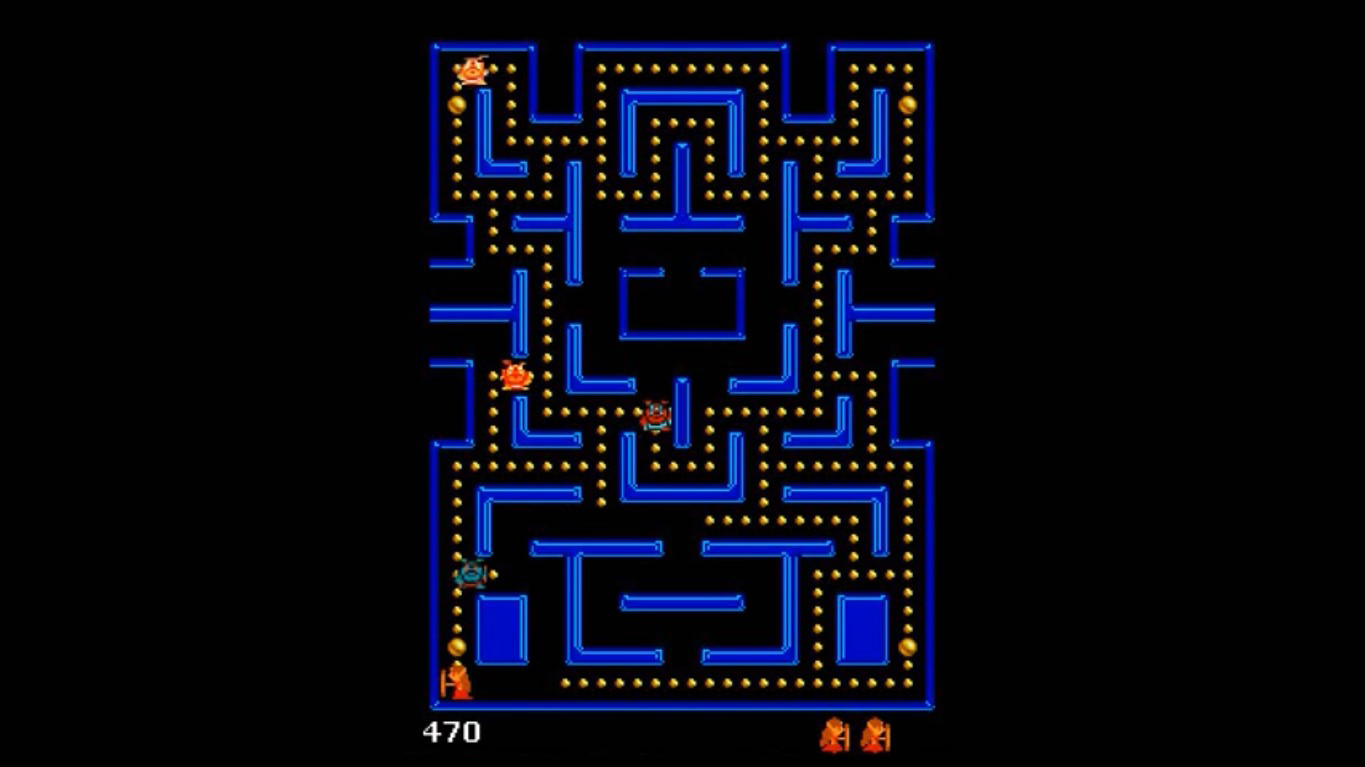 This one is fairly self-explanatory.

This fan-game is inspired by the legendary video game series The Legend of Zelda and retro superstar Ms Pacman!

There isn’t an awful lot to explain here. It’s like Ms Pacman, except this time the hero is The Legend of Zelda’s damsel in distress, Princess Zelda. Zelda moves around through the mazes, being chased by what I assume are moblins and Bokoblins. But they could be anything from the Zelda series. You move Zelda around, collecting the dots and avoiding the monsters. You can counter attack by collecting the same tokens that turn Pacman’s ghosts blue. Instead of hearing the Pacman theme, you can sing along to the original, arcade sounding, Zelda theme as you play. Basically, it’s Pacman with Princess Zelda. Which I quite liked.

The creators mention “strong female leads” very briefly in their description (among a lot of numbers and links), which I think is a fair point to discuss. After all, Pacman was re-released as Ms Pacman because it was so popular among women. It’s still thought by far too many that games are “for boys” even though adult women make up a significant part of the gaming community. I had a lot of fun playing this game and I’d love to see Princess Zelda saving Link for a change!

Someone Tell Luigi I Love Him – Joey Schutz 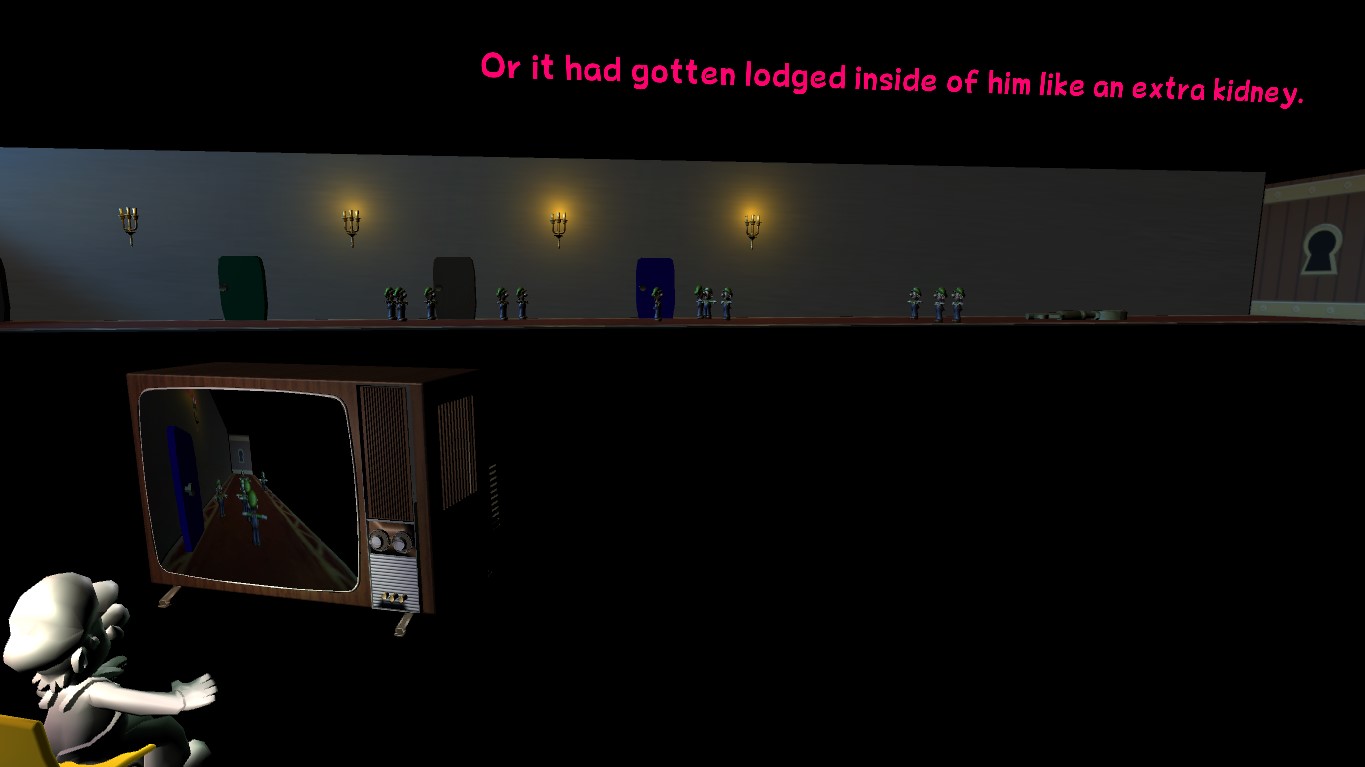 While this one may look like a silly, parody game, it actually feels a little emotional.

Like most game on this list, it’s a tad creepy. With a sort of “play within a play” element, you are someone who is reminiscing about playing Luigi games with his brother. Because you miss your brother, you decide to play Luigi’s mansion alone. As you progress in the game, you continue to think about your brother, sad messages coming up along the screen. Far from being the usual happy, sparkly settings of the Mario games we all know. It’s an eerie distorted world, with a lot of unresolved issues.

The game feels a little glitchy and distorted at times, but I’m not sure if that’s intentional or not. It’s possible that this was to add to the atmosphere, as the sound carries a very creepy voice singing along in a disturbing manner.

Models within the game are taken from Luigi’s Mansion, Super Mario Sunshine, and Mario Kart 7, giving it a rather sweet fan-made touch. Even though it’s just as bizarre and creepy as some of the earlier entries on this list, I feel like there was some heart to this and a lovely message deep down.