Come for the hunky werewolves; stay for the overwhelming charm. 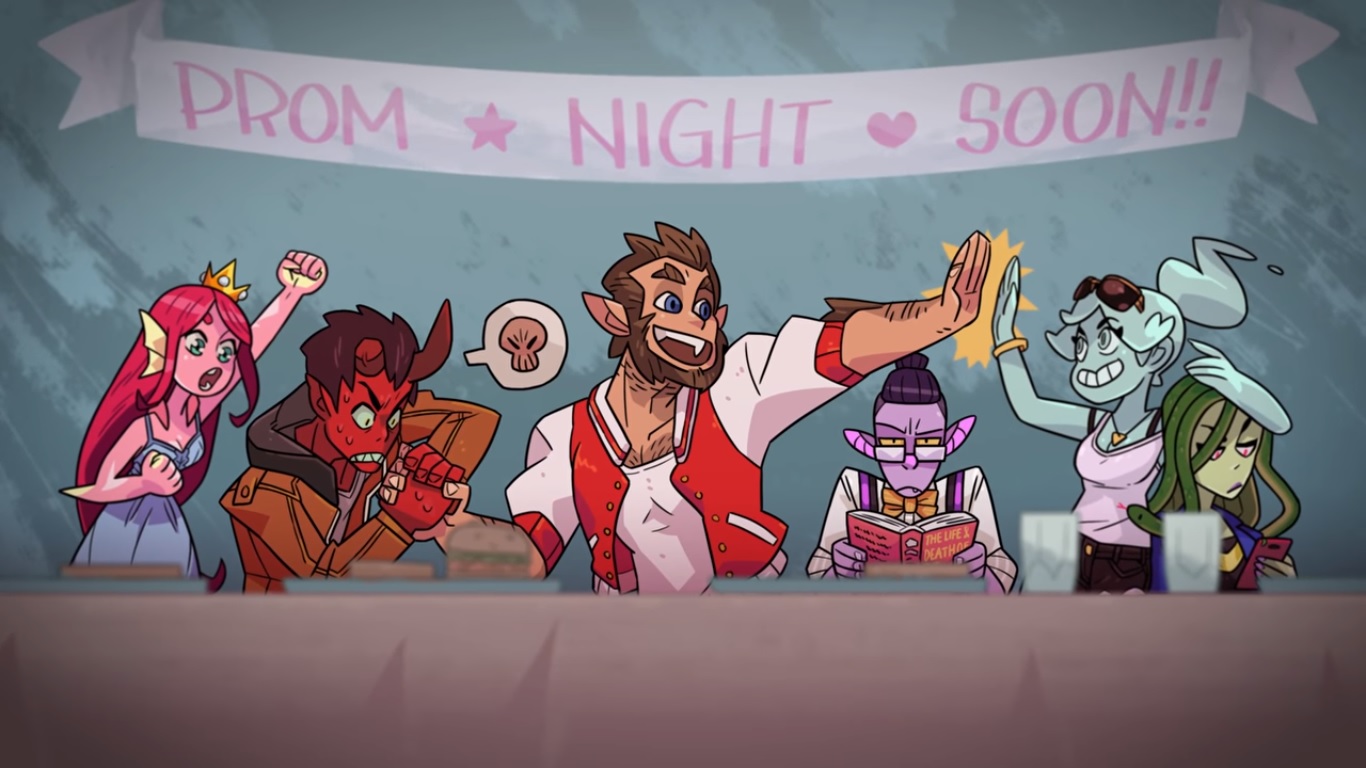 My fiancé and I sat on our couch, ready to compete for affections in Monster Prom. As the game’s intro sequence played, we were introduced to the six possible love interests, and my fiancé said, “You’re going after the buff werewolf, aren’t you?” I was indeed, and that werewolf turned out to be an adorable oaf.

Monster Prom is one of the most unbelievably charming games I’ve played, and it very quickly became an all-time favorite. I don’t throw around this adulation lightly, but damn, I love Monster Prom. It’s important to note that Monster Prom was virtually made for me. It checks all of my boxes: young adult shenanigans and melodrama; gleeful eroticism and raunchiness; a delightfully modern setting, complete with references to Rupaul’s Drag Race; and, most importantly, reverence for horror monsters and all things supernatural.

In Monster Prom, your explicit purpose is landing a date to prom with one of six popular classmates. You have a set amount of time and events in which to do this, and Monster Prom randomly decides which events you’ll encounter each playthrough, resulting in a roguelite quality. In addition to its strange combination of roguelite and dating sim, Monster Prom can also be played with 1-3 others in a multiplayer mode. This confluence of novel ideas would seem to be its most appealing quality, but it’s the game’s writing that shines. Few games have such consistently clever writing on display. Every encounter with each of the lovingly realized characters – from the aforementioned hunky werewolf quarterback to the adorkably hipster vampire or the prince of Hell with two dads – stands out.

If I had a quibble or two with Monster Prom, it’s that the more ambitious elements sometimes get in the way of that wonderful writing. Its roguelite nature allows its characters to be fleshed out through numerous events over numerous playthroughs, but it also results in playthroughs lacking narrative closure – even successful ones where you land a date to prom. I wish the game devoted a little more time to giving each of my adventures with its lovely characters a more satisfying conclusion.

In search of more satisfying conclusions, I hunted the game’s secret endings, revealing another flaw in Monster Prom’s roguelite structure. While attempting to obtain secret endings I was forced to endure repeated viewing of many events, causing those events to lose a bit of their charm. It’s made especially frustrating because I couldn’t control if I would get the particular events I needed for the ending I sought on any individual playthrough. However, discovering those secret endings was eventually worth it. I also found its multiplayer elements, while not unappealing, also not entirely integral to the experience. As much as I enjoyed playing the game with my fiancé, I equally enjoyed my subsequent solo crawls into the game’s fantastic world.

I absolutely adore Monster Prom. I adore its characters and beautiful illustrations and its hilariously apt score – one track has ghastly screams playing under its jaunty tune. While some of its innovations aren’t entirely successful, it’s hard to fault the developers for trying something new.

Just go play Monster Prom – it’s what I’ve wanted to do the whole time I’ve been writing this.