A steampunk puzzle platformer with good ideas but middling execution. 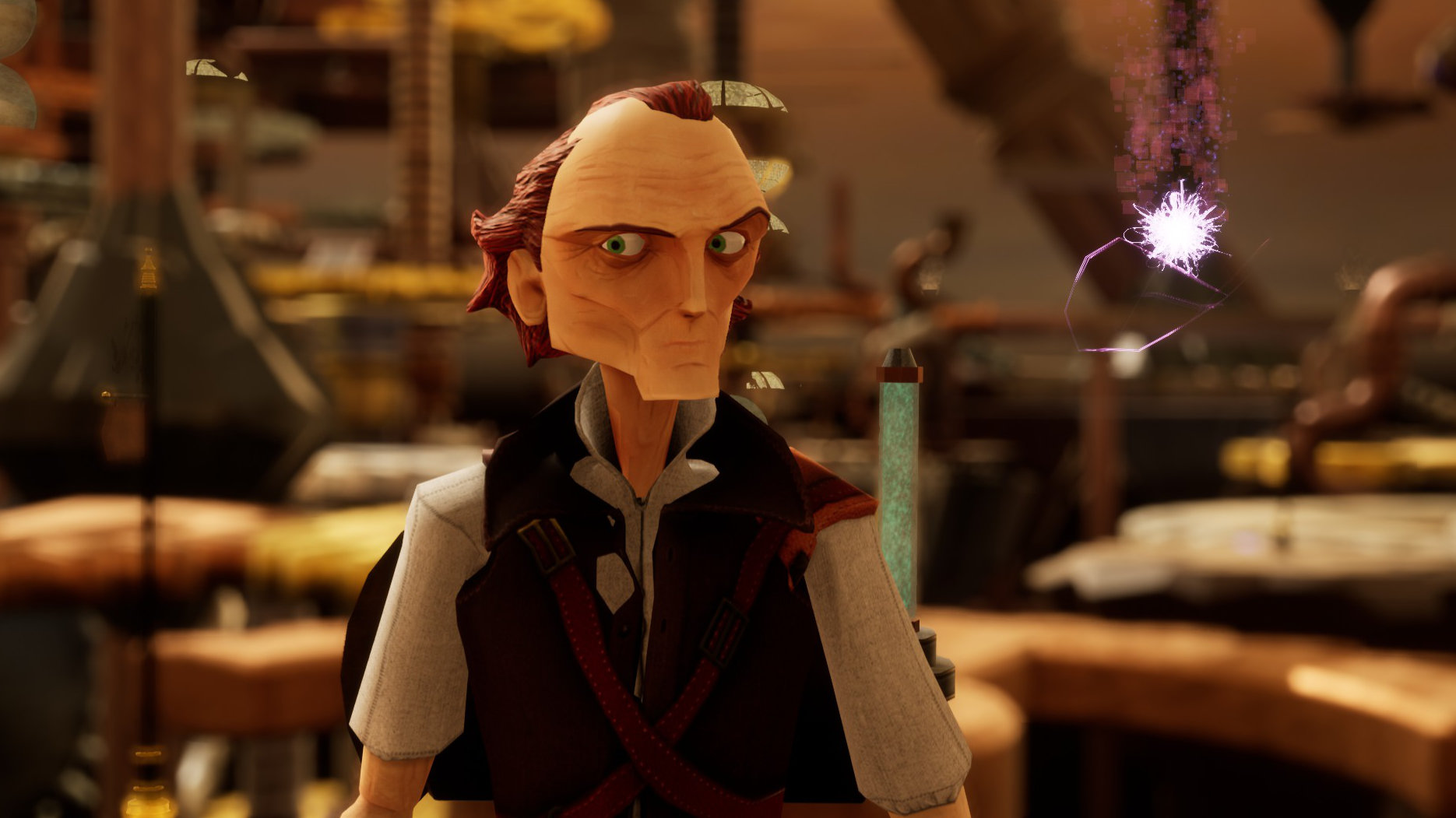 Age is not just a number for Alexander – precocious, revolutionary engineer of Clock Town – as he awakes from a work-nap to find his all-powerful clock tower has been sabotaged. Oh, and he’s rapidly ageing as a result.

As a third-person puzzle platformer with an oozing steampunk aesthetic and some light action bolted on for good measure, The Watchmaker is a unique take on the genre with some good ideas, though spotty execution hampers the experience.

Playing as Alexander, you need to fix the clock tower and stop the ‘Ruin Saboteur’, making sure you don’t hit ninety years old. If you do, you’re dead. Simple as that.

Alexander’s mission covers four sprawling levels – with a final fifth reserved for puzzly boss encounters. From a dollhouse in a vast toy world to creepy Victorian streets laden with choking fog, the most engaging part of The Watchmaker is entering each new level and just taking in their scope before the puzzles begin.

Most levels are built so you can gaze into the distance and figure out where the puzzles are, and how each ties into the overall structure of the space.

You can explore each area freely, with environmental puzzles set down different paths. However, finding your way around these levels is not as wondrous as it could be. 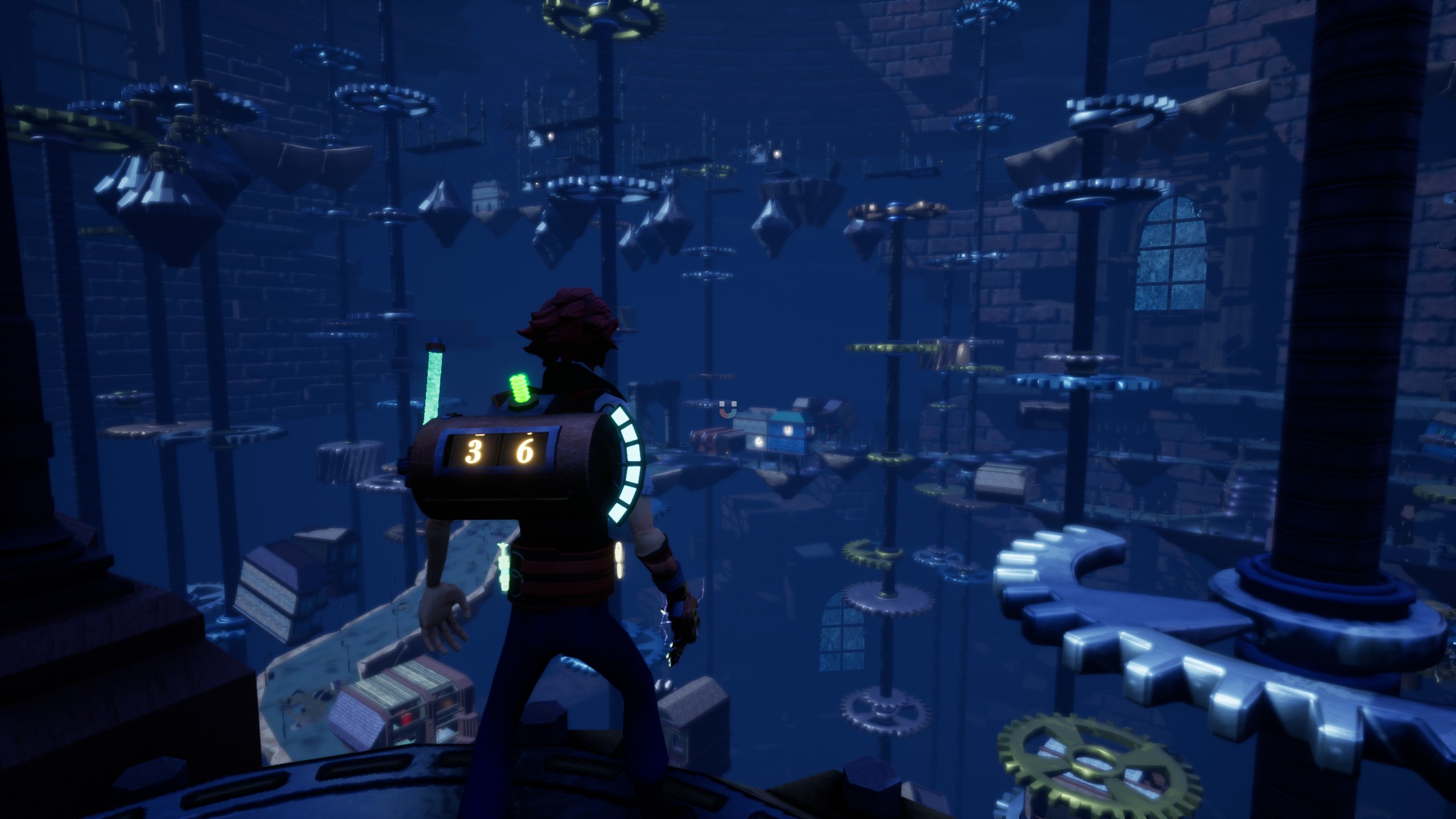 Alexander is kitted out with a few powers, some time-bending and some not. Primary of these is a magnetic grip which can lift certain objects and force-push others. Most puzzles are solved with these two abilities, and that’s a bit of a letdown – mainly because the force push power is temperamental and unwieldy, especially in more frantic scenarios.

Constantly strapped to you is a steampunk-style backpack. Not only does this display your advancing age, it’s also equipped with a stamina meter and a power gauge. Using powers drains your power cells, so you need to wait for them to regenerate.

Usually this isn’t an issue, but sometimes you’ll find yourself running around waiting for a cell to replenish, only for the force push to fail, despite your aim seeming accurate. You’re then left to wait around for another cell to recharge so you can try again. This is always aggravating.

For the most part though, the tools work well enough. You’re never overloaded with options, and most of the time you only ever need two powers. You’ll face small, annoying enemies in each level but these are best left alone; outrun them and save yourself the time – you need every second as it is. 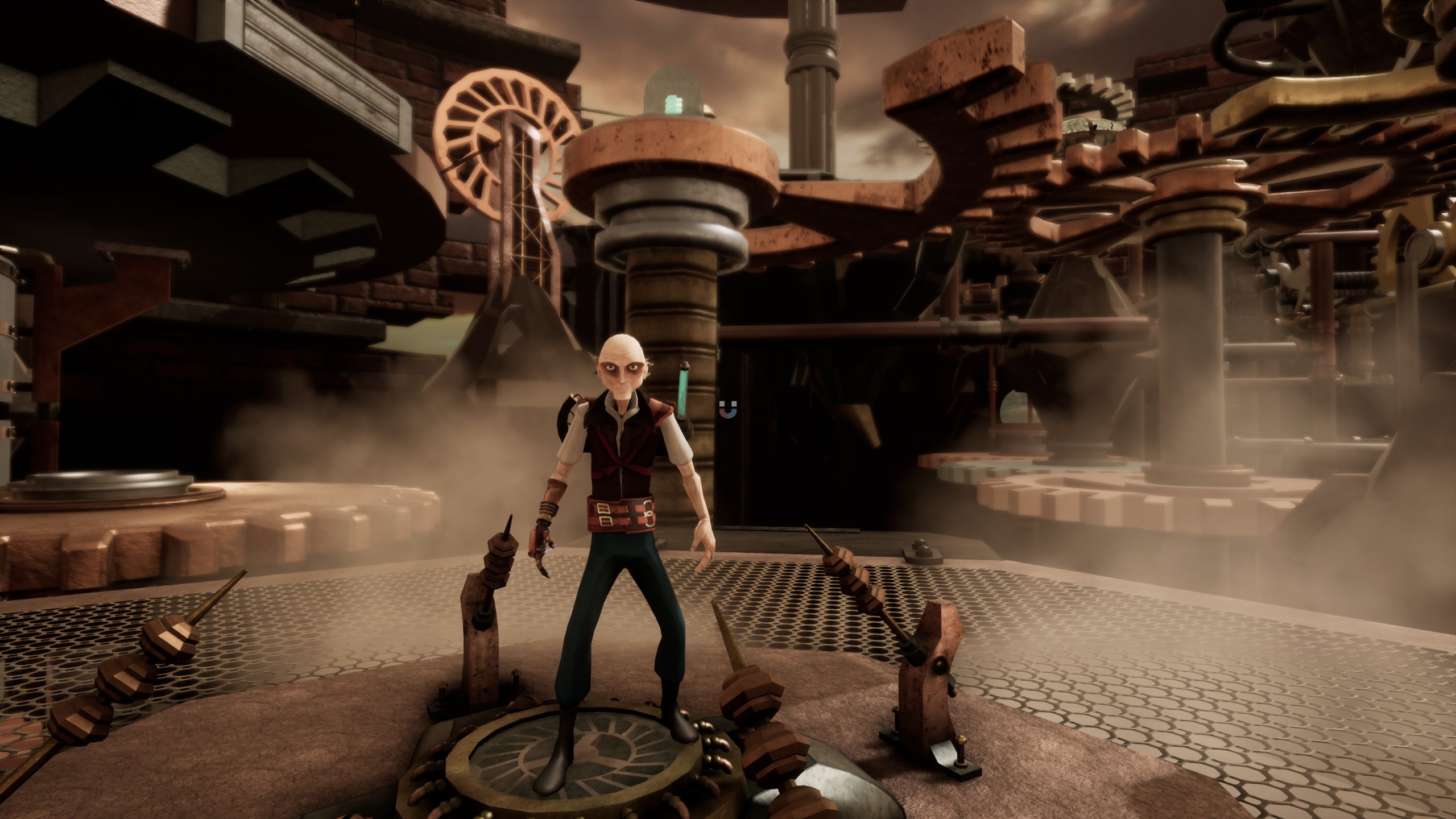 Alexander can wind back his backpack 20 years at a time whenever he finds any of the various single-use keys in the game world. Winding back to 30 (the youngest possible age) imbues the world with rich colour, and Alexander gains a full head of red hair and a noticeable youthful vigour. Let him tick over into his 80s and his hair turns grey and patchy, adorning a gaunt, wrinkled face which stares blankly into a monochrome world. It’s a very nice effect which, ironically, never gets old.

Winding back the years is both satisfying and a relief during puzzle sections. Checkpoints will also rewind the ageing effect, taking you back the beginning of whatever period of life you’re in. This system acts as both an active health bar and a constant time limit. It definitely has its moments of glory, but also its periods of frustration.

Having to repeatedly hoof it back to a checkpoint to regain twenty years – a few minutes in game time – while trying to figure out an obscure puzzle can get tiresome. But for boss fights, especially the final encounter, it’s a real rush. It’s definitely the game’s main gimmick, and one that, despite its issues, works very well gameplay-wise. 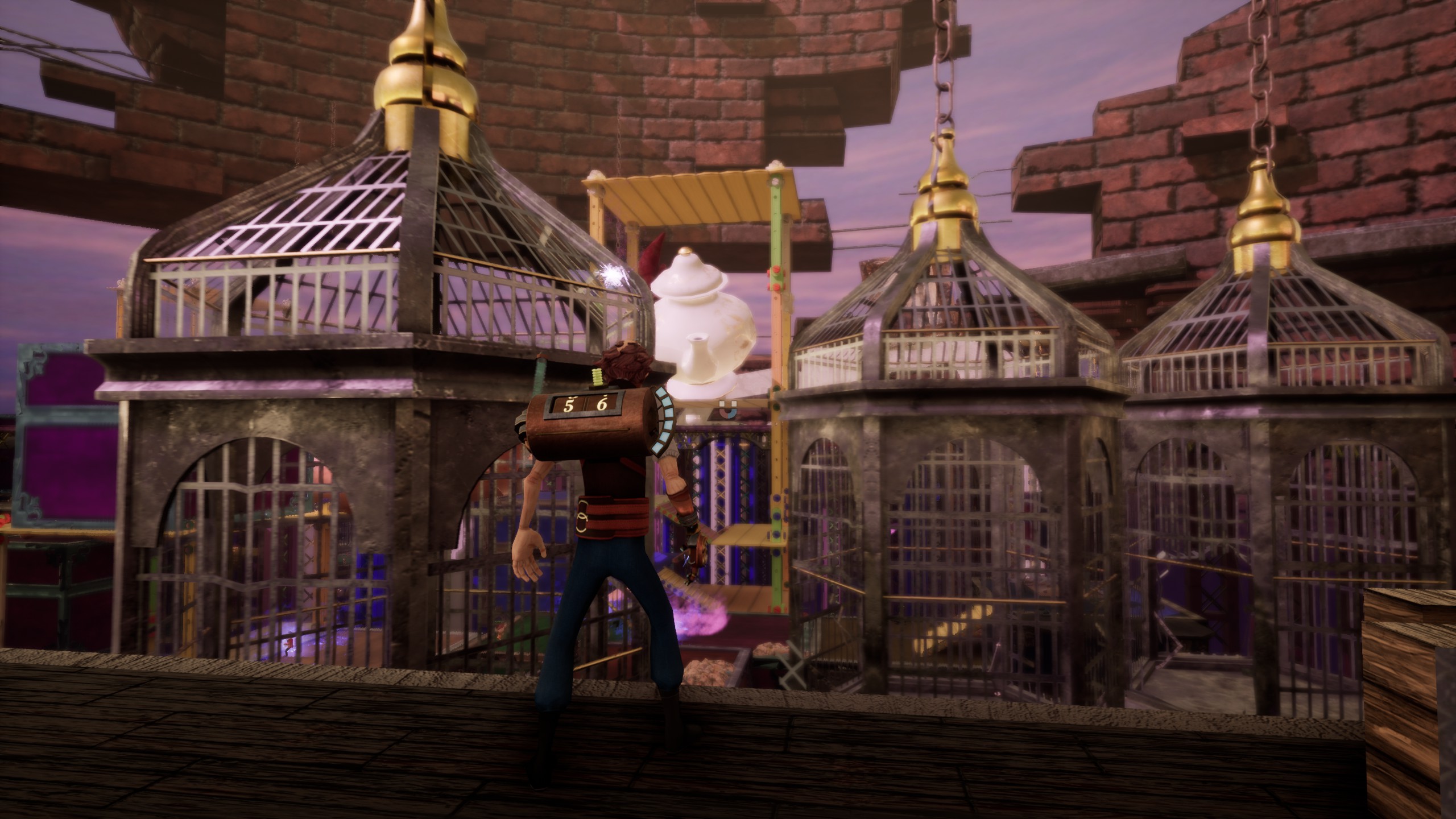 My main issue with The Watchmaker was its insistence on rarely throwing you a bone. Larger puzzles can leave you with no clue what to do, how to approach it or what is wanted from you.

A few times I’d assumed the game had bugged out and left me unable to finish, only for me to stumble on a solution by chance after running around, restarting and generally bashing my head against a wall for near an hour. That’s a disappointment.

Instances like this drag the pacing to a grinding halt, and I found the more linear penultimate level a revelation; it balances storytelling and puzzle solving handily, while maintaining forward momentum. If the other levels were as streamlined, The Watchmaker would have been stronger for it.

Speaking of story, the characters and mystery are what really kept me going. Iffy voice acting for half the cast aside, the relationships between deeply flawed Alexander, the ‘Chatty Voice’ (who comes, goes, helps and annoys as he pleases), the enigmatic antagonist and the mysterious tragic heroine are at the heart of The Watchmaker.

And it’s a story worth telling with a satisfying, honest conclusion. Context of the larger, 17th century steampunk world is gained via collectible newspapers and letters, and I found these compelling – and necessary, if you want to get the most from the ending. 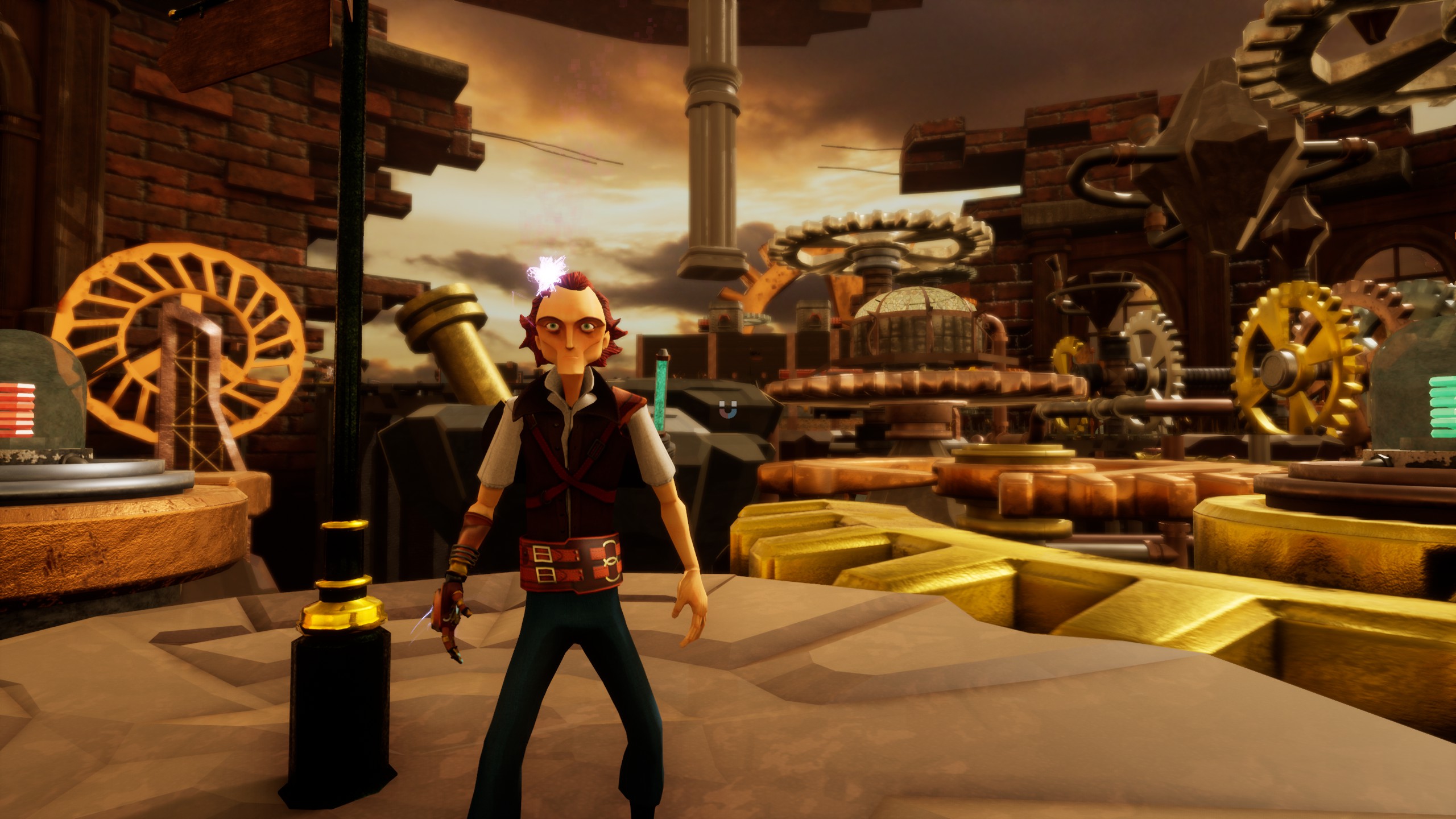 Technically, The Watchmaker looks great – buoyed by clever artistic choices and the unique art assets for each level. However, it does feel a bit primitive. Load times are long, it can take a good three minutes to get into the game, and going back to the main menu is basically a soft reset.

Every death forces a jarring cut back to desktop before flashing the screen back and throwing you into the last checkpoint. Almost every time this happened I thought it was going to crash again. There are no manual saves – a frustrating choice – and combined with a lack of map, compass or basic hint system of any kind, it feels bareboned. A bit of a polish and a few small quality of life additions would have done wonders.

But even so, the concept and story carries most of The Watchmaker’s charms. Art and narrative are solid, while puzzles can be very rewarding at their best and tedious and frustrating at their worst. In the end, it’s a competent puzzle game which uses its cool gimmick to strong effect; worth the eight hours I put in, but not something I’d choose to revisit – unless I had much more time on my hands.