Cults aren’t for everyone.

Cults aren’t for everyone. 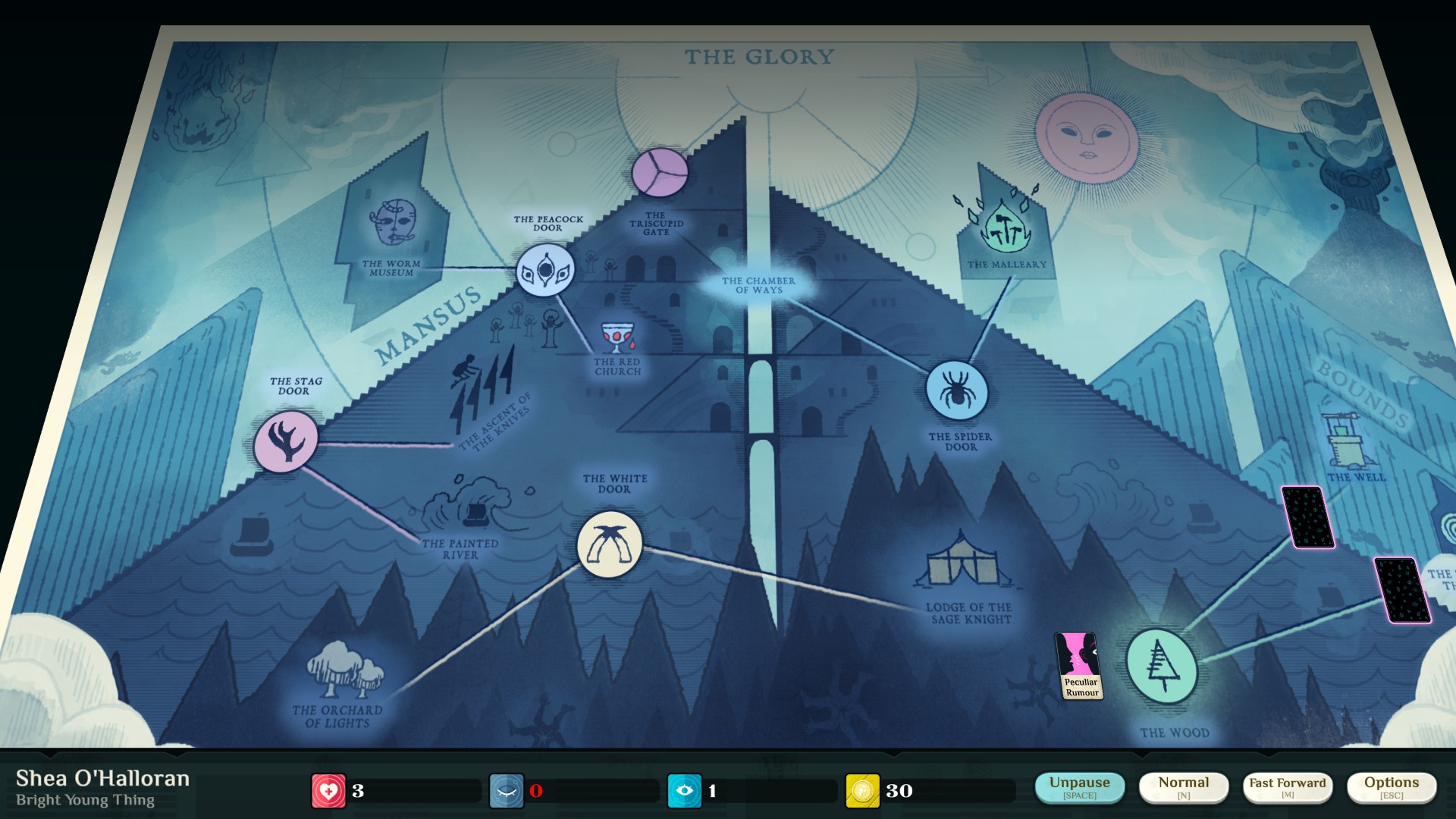 Even the greatest prose in the world will drive you mad if read too many times. I want to love Cultist Simulator. The concept is excellent, but the execution is remarkably obtuse. I adored my first playthrough, discovering new things and enjoying the superb writing on display. But, (probably) like joining a real cult, it’s incredibly interesting and fun at first until the bodies pile up. The writing here by Sunless Sea’s Alexis Kennedy is top-notch, but let down by questionable permadeath mechanics.

Cultist Simulator is a resource managing digital card/board game with two major components. Tiles are verbs, things like ‘study’, ‘explore’ and ‘work’. Every interaction you make with verbs comes from your cards. Each card is a noun, such as people, cultists, emotions like ‘passion’, and tools or books. Every card then has certain ‘aspects’ which are the type of card, detailing which slots they can fill.

This seems a little vague at first, but that deliberately plays into the experimental, mysterious nature of the sim. At first, you’ll stumble through, throwing cards in any slot they’ll fit just to see what works. All cards and tiles have amazingly written descriptions that add flavour, or riddles that can be solved with the right combinations. 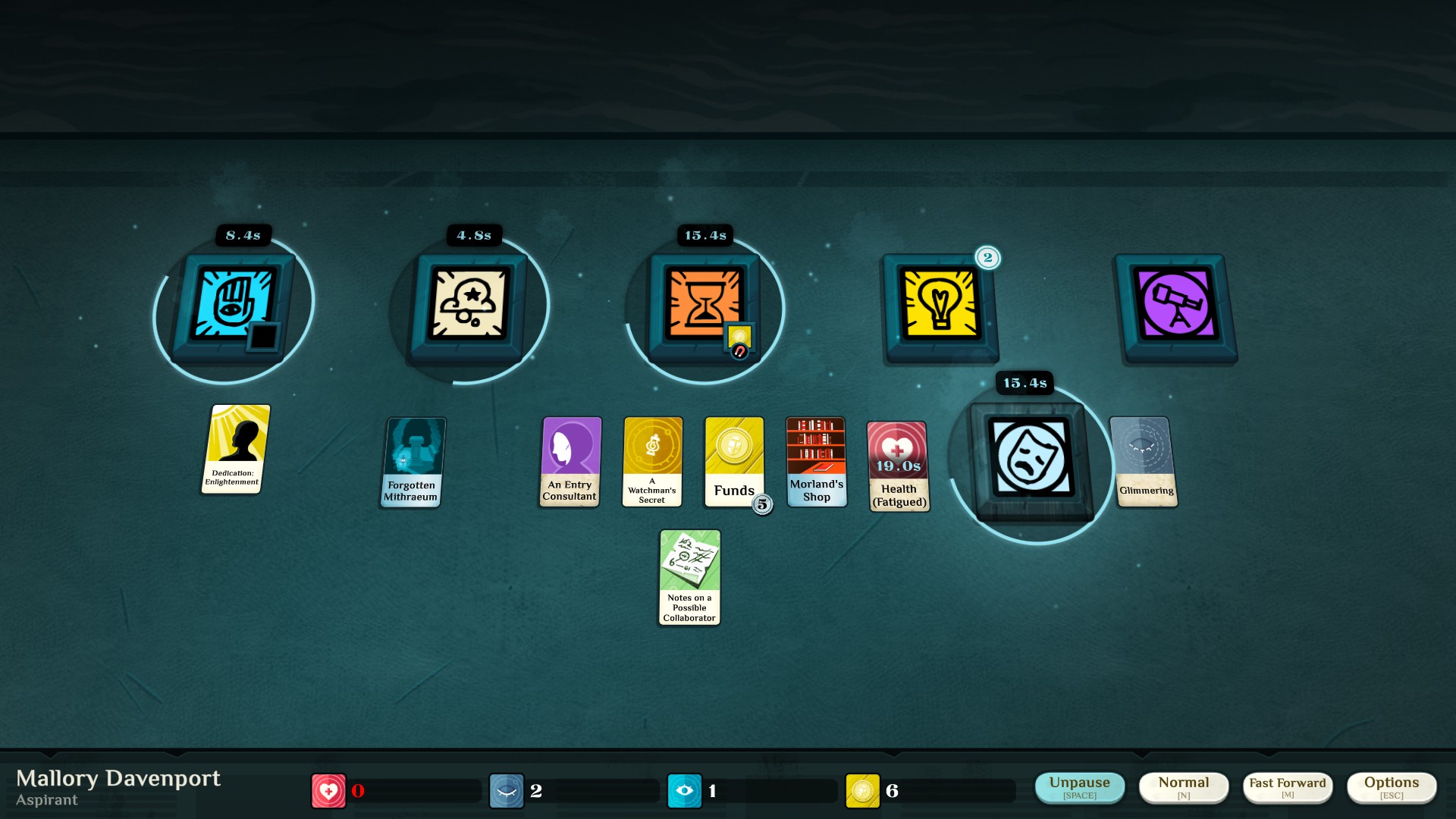 Clicking on a verb ‘slot’ will highlight cards that will fit there, and the aspects of cards tell you which verbs they can be sorted into. It’s a system completely glossed over by a lack of any tutorial, and it feels like part of the game is discovering the mechanics in the first place. Taking notes is vital to be able to remember all the combinations available here.

Once a card fills a slot the verb will begin a timer. Balancing these times of various lengths for different tasks can feel like a chore. A turn-based approach could have served the flow better – the same concept would still be possible with some events taking more turns. At this stage, pausing and un-pausing frequently destroys the meditative feeling of the sim.

The core of Cultist Simulator is experimentation. Its entire gameplay loop boils down to an occult crafting game, with recipes obfuscated by riddles, clues, and fluid prose. The major reward for any challenge is the satisfaction of committing a useful recipe to memory and reading the next juicy titbit of lore. Because these are the only rewards, they’re at odds with the permadeath mechanics. 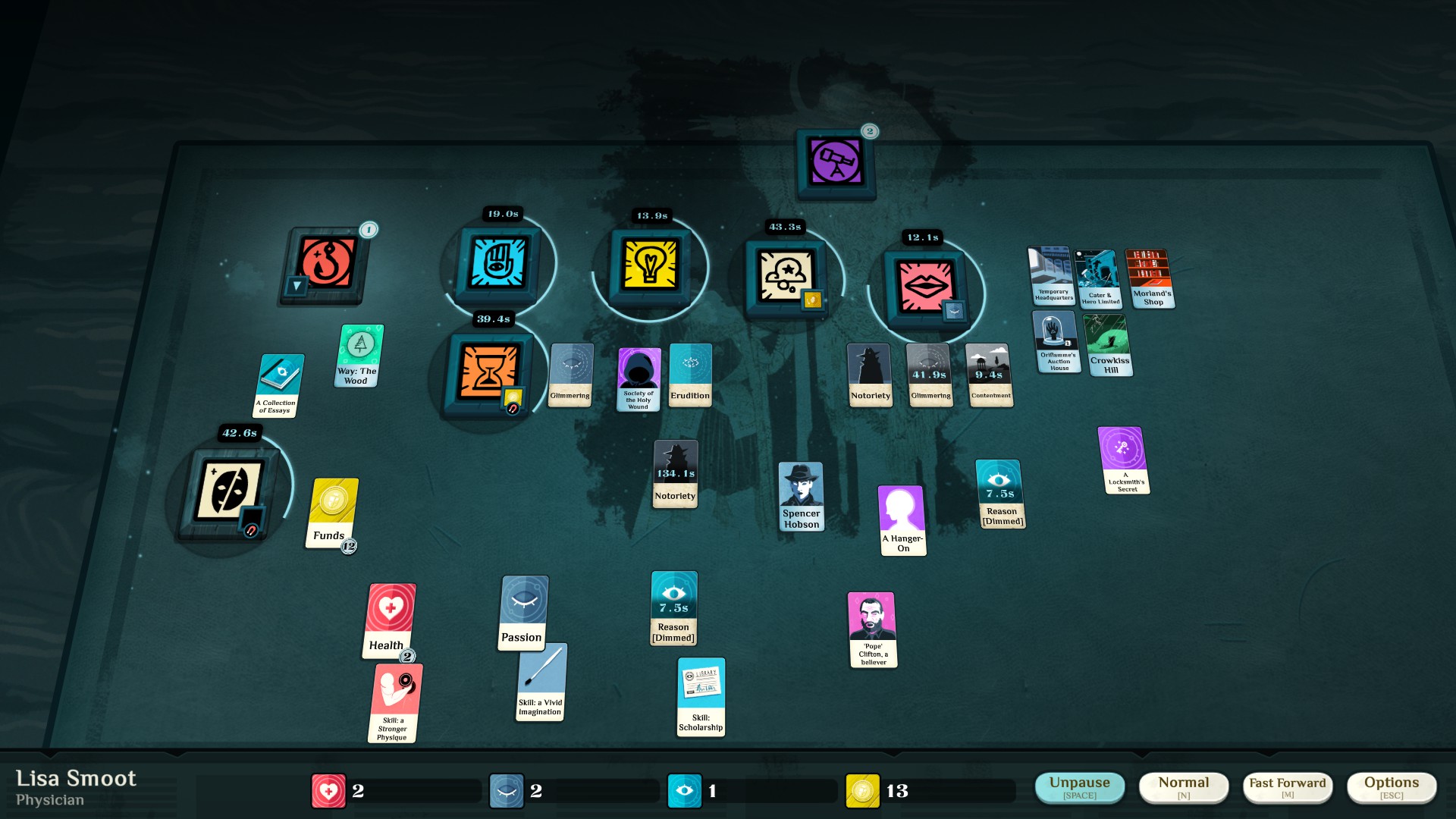 You’re going to die – a lot. Cultist Simulator tries to carefully balance positive and negative results of experimentation to give a sense of danger to your delightful machinations. But death will strip you of all progress. It’s back to square one using one of the different characters available, each offering a slightly tweaked experience. For example, the Physician begins with steady, well-paid employment.

These different characters give some variety to how you go about building your cult and can give different endings. They’re only different for small moments though, like providing a different job at the beginning of a run. Ultimately, they’re all trying to reach the same place and character-specific endings aren’t as rewarding as endings available to anyone.

There is a fundamental discomfort between the game’s theme and permadeath implementation. The writing is excellent, but unless you are incredibly lucky or an actual cult leader, you’re going to see the same writing in descriptions and events ad nauseam. There is no in-game benefit of persevering through a playthrough except for learning a combination you didn’t know before. Oh, and if you have a character you want to use next time but doesn’t draw randomly, too bad. 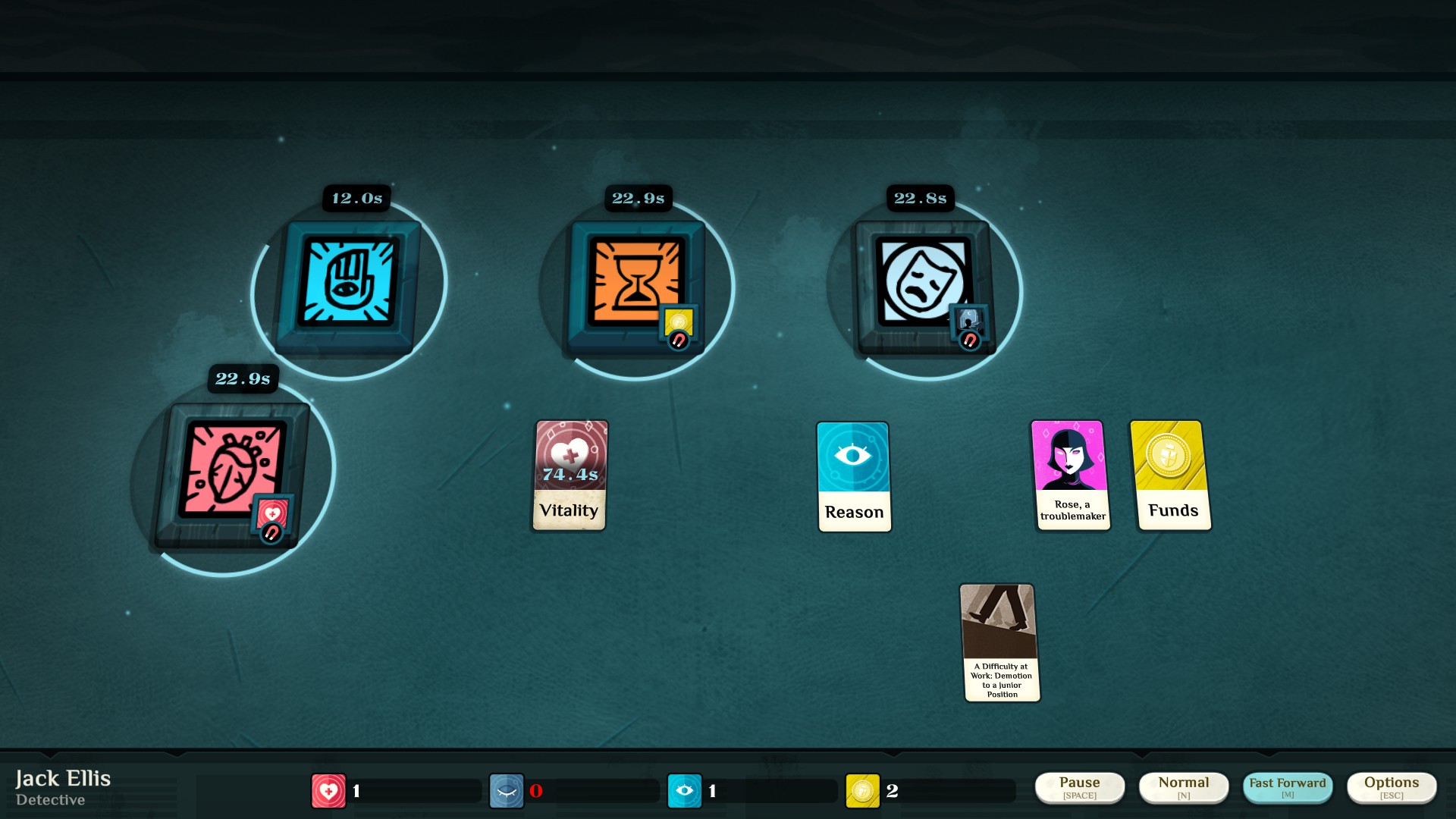 The punishment for experimentation is too high. You will sometimes play for hours simply to get back to where you were before death. It’s a shame the writing is skipped over and forgotten once you’ve seen the same events fifty times. There is no automation for the more repetitive verbs like working or exploring, and spinning each plate can get old quickly.

There is a long-term goal of climbing the Mansus map that feels unrewarding and tedious for the effort required. Once you decipher the riddles to climb to another reward tier, you find the randomised rewards can ruin a run if you fail to get what you need before death. And what’s at the top? Well, nobody really knows yet. Most of your satisfaction will come from the unique stories you can craft with your actions anyway.

The presentation is serviceable. Cards are bright and clear but there is no method of automation or organisation for the board. Cards will be scattered all over unless you keep up with putting them where you can see them. There is a ‘collect all’ button for when you finish an event but it will often place cards on top of other cards. This is frustrating when timed cards are covered, only to disappear or be swallowed into one of many deadly conditions. 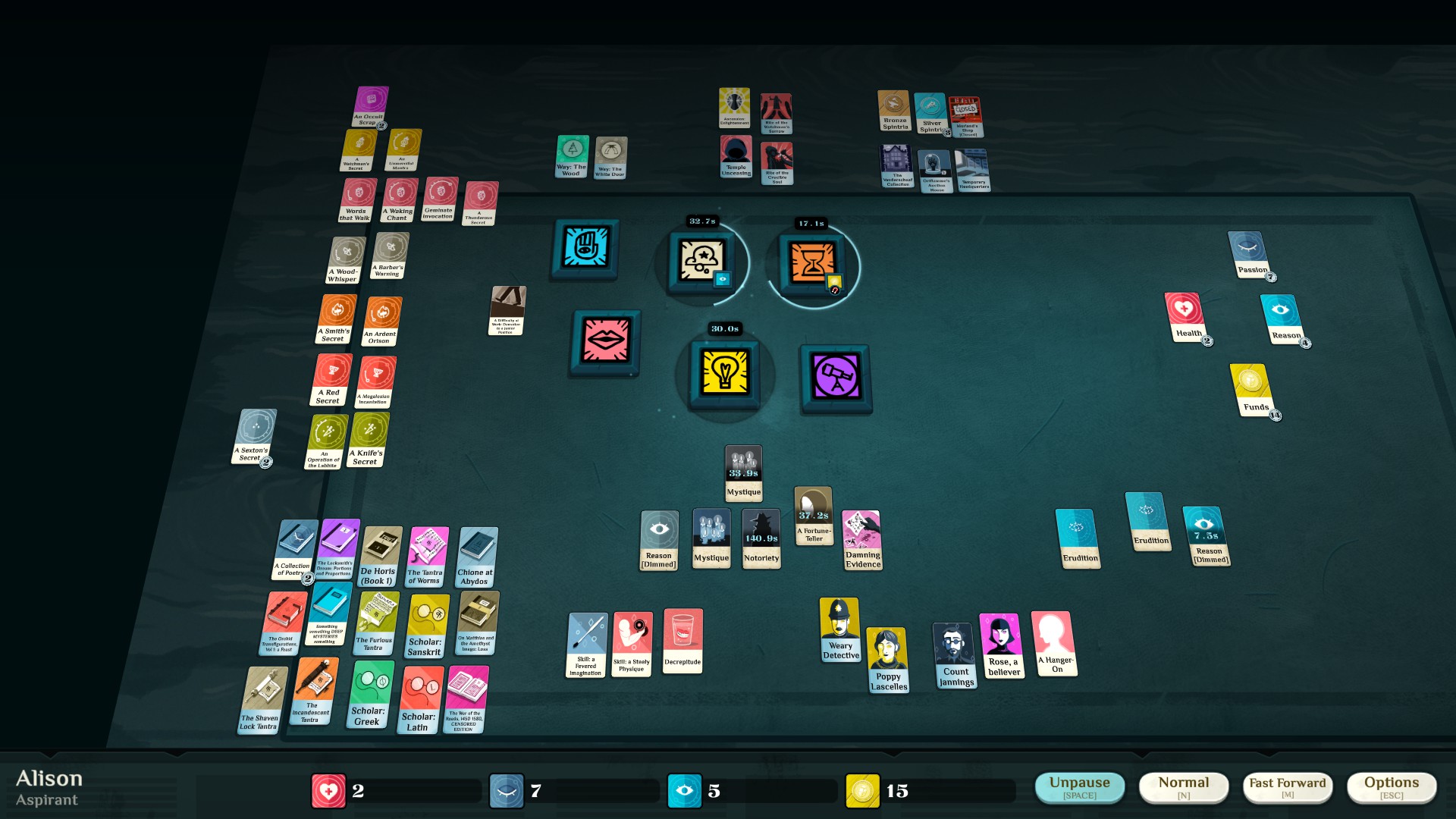 Updates may sort out these kinks and add incentives for the roguelike elements to make sense, to make you feel like you’re getting somewhere. There is huge potential here if it does, but in this state, I struggled to have fun for more than an hour after my first death.

Like I said before, I want to love this game. I still love the lore and writing. But I can’t have fun with systems that are punishing and frustrating over creative and challenging. If this game was shorter and more refined, I’m sure I’d love it, but the 20-40 hours advertised on the Steam page is going to be maddeningly repetitive for any but the most ravenous pursuers of occult lore.

Cultist Simulator is about a world out to get you at every turn through illness, madness, despair, and sacrificial rituals. It’s just a shame the game seems to kill your fun too early.