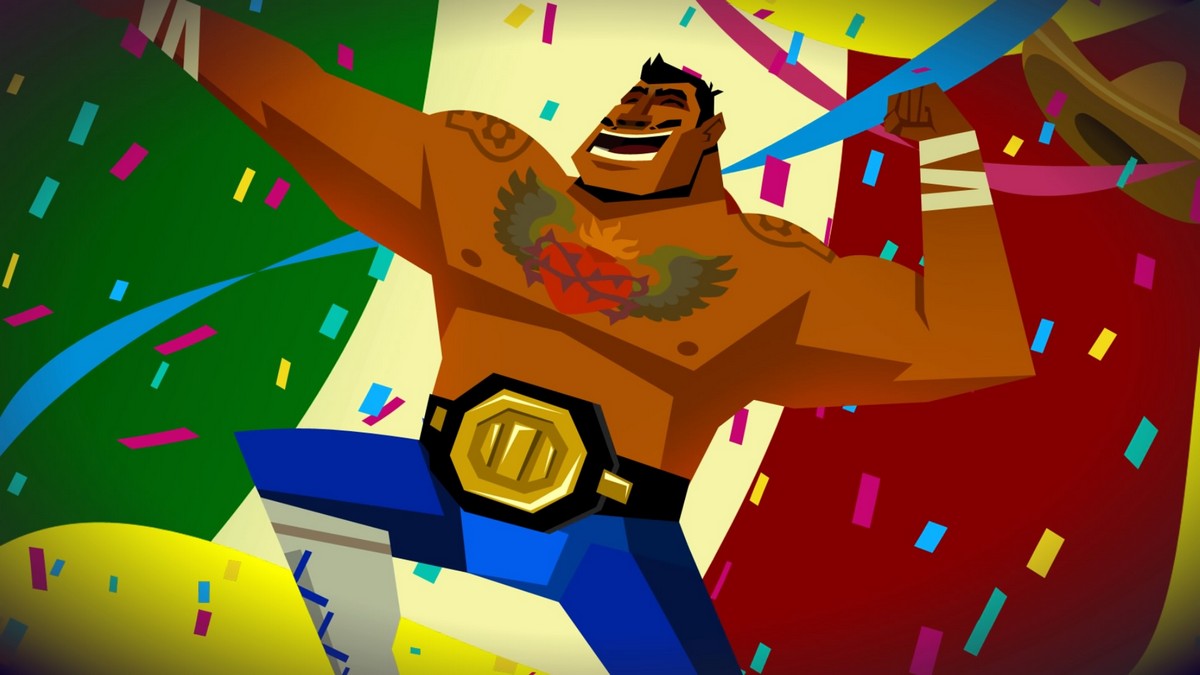 I’m going to preface this review with an important admission: Guacamelee is one of my favourite games of all time. There’s a problem with something being your Favourite Thing of All Time, though: when its sequel rolls around, your levels of expectations and hype are practically stratospheric.

And so I booted up Guacamelee 2 with my excitement at a fever pitch. I had to bear in mind that a Metroidvania typically needs a little time to get going, of course. By design you start off restricted and underpowered, and Guacamelee 2 is no exception. But not for long. And when it gets going, it never lets up. This triumphant sequel has everything which made Guacamelee great, but more. More abilities. More dimensions. More memes. And more chickens. A lot more chickens. 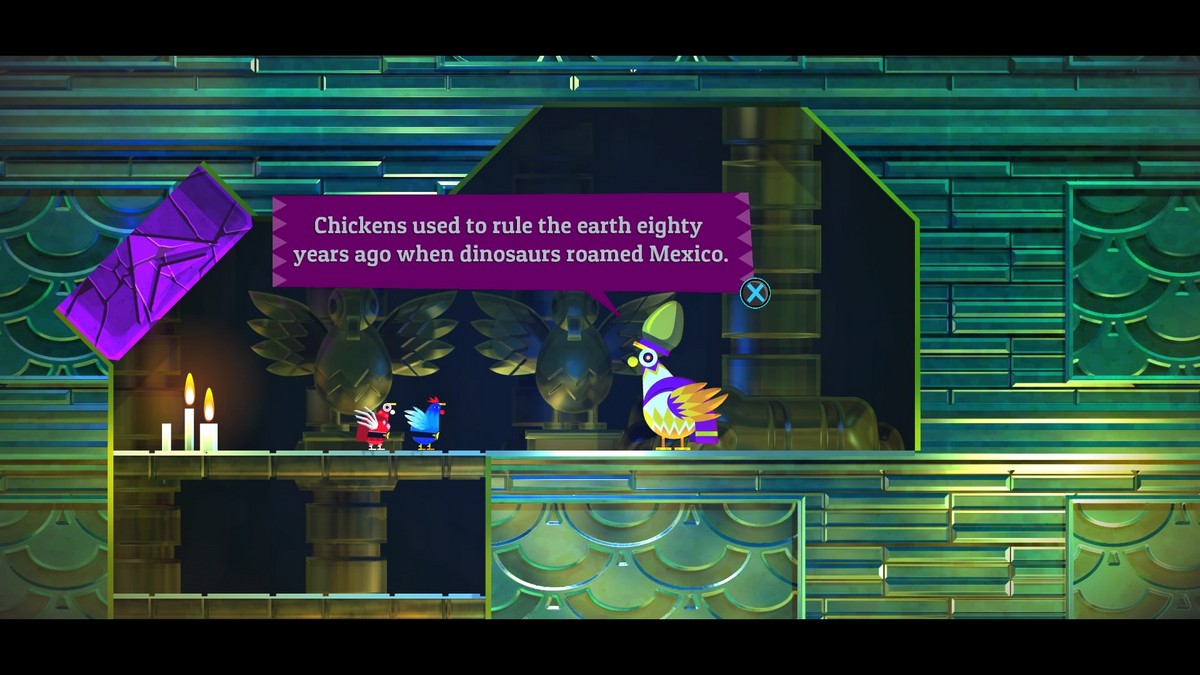 After thwarting the malevolent Calaca in the first game, Juan has settled down and started a family. But there’s no rest for this heroic luchador, as the entire Mexiverse comes under threat from The Darkest Timeline. In this alternate dimension, Juan failed to defeat Calaca and it fell to another plucky Luchador, Salvador, to finish the job. But now Salvador’s gone rogue. Seeking the Sacred Guacamole, Salvador yearns for omnipotence – even if he has to tear apart the fabric of reality to acquire it.

Guacamelee’s winning formula hasn’t changed but rather been expanded upon. Throughout his quest, Juan learns a monstrous bevy of skills at a dizzying pace. Old favourites like the Rooster Uppercut and Dashing Derpderp return, alongside a bunch of new ones. Not only are these abilities useful, or even essential, for traversing the Mexiverse; they’re effective against enemies in the punch-ups you’ll frequently encounter. 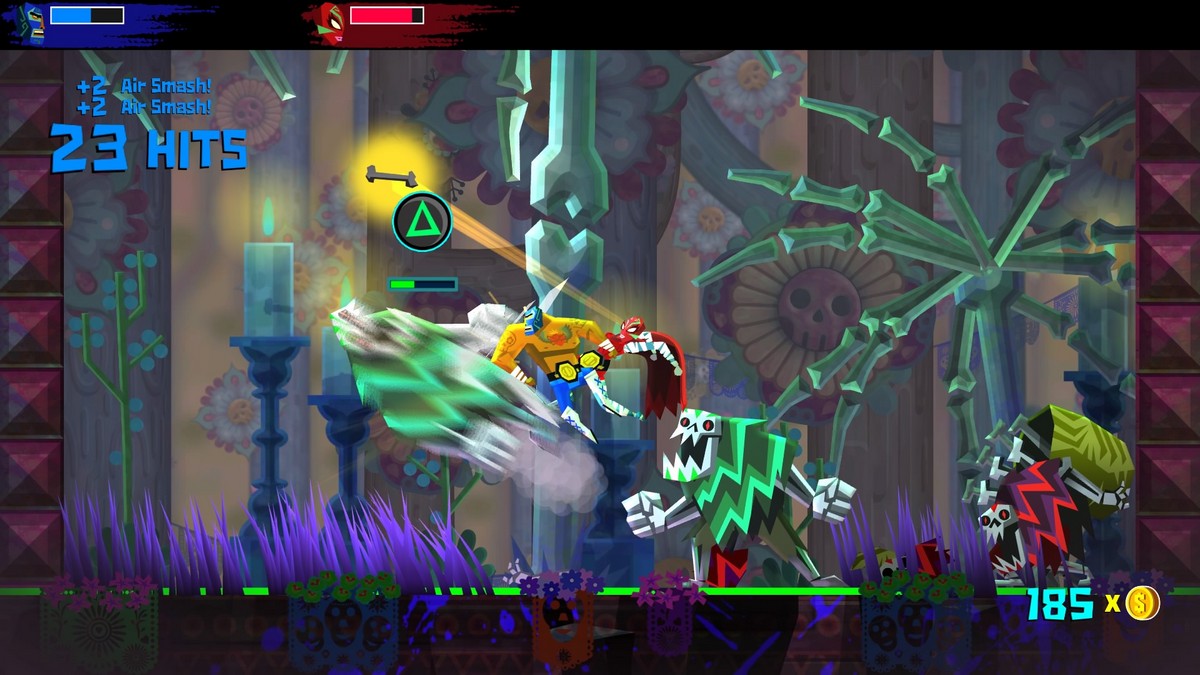 A welcome surprise this time round is a substantial upgrade to chicken mode. Once a purely amusing bonus which let you squeeze through small spaces, chicken mode is now practically as powerful as Juan’s human form. Brawling as a feathery fighter is endlessly entertaining and adds even more diversity to an already varied roster of powers. Being a chicken – and meeting other chickens – is also an integral part of the story.

Rounding this off is a slew of RPG-lite upgrades, unlockable via the coins you earn during combat. From teaching new wrestling moves to boosting your power and – most importantly – making your fowl form even more badass, these provide something to always strive towards. Guacamelee 2 is a quest of near-constant empowerment. It’s hard not to feel like a wrestling god. 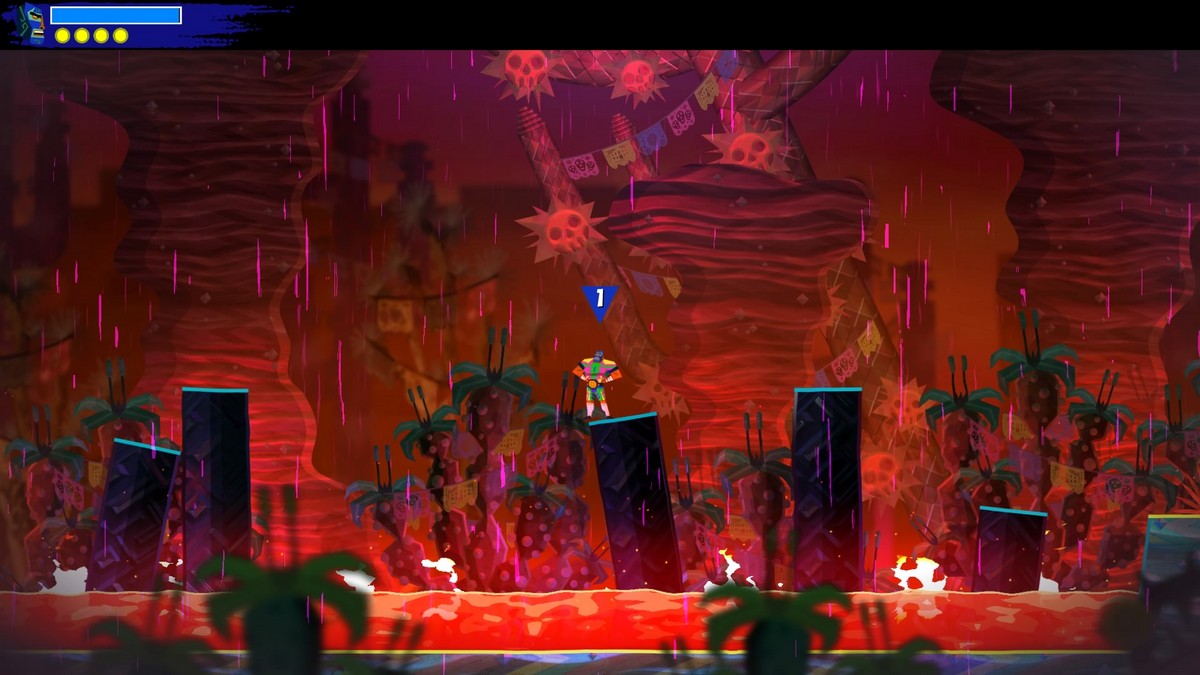 Good thing, too, because the Mexiverse will put all of these skills to the test, with some of the tightest and most inventive platforming that the genre has to offer. Hardly anything is static in this bonkers world, whether it’s mobile platforms, levels shifting between the land of the living and dead or a giant alebrije’s head chasing you down, eager to make you its lunch. Excellent pacing – with surprisingly little backtracking for a Metroidvania – keeps the action coming thick and fast.

Crucially, however, the difficulty has been absolutely nailed. The main campaign is accessible enough for almost anyone to complete. Multiple challenge rooms present more dangerous activities with the promise of a reward chest at the end. And for the bravest of the brave, a side quest to track down key segments in order to open a golden door will test your platforming abilities to the absolute limit. Reminiscent of the hardest Celeste sections, these are a real tour de force of muscle memory and hand-eye coordination in which a single mistake will lead to your death. 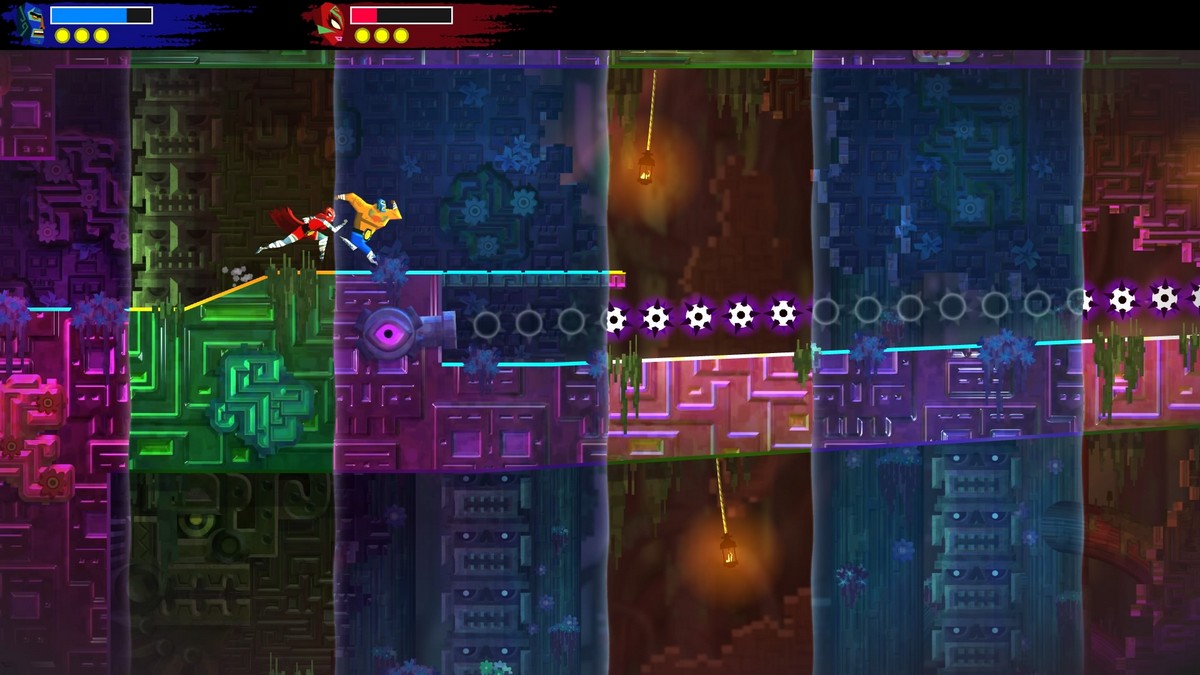 No matter how tough Guacamelee 2 can get, there’s a wonderful element of playfulness to everything which stops it from ever becoming a drag. Even something as simple as collecting one of the many stamina bar pieces is met with glorious fanfare by chickens in sombreros playing guitars and maracas. When a story hinges around plot devices like a council of goat-men from different dimensions and rumours of a Chicken Illuminati, you know it isn’t taking itself too seriously. There are countless moments of surprise, hilarity and pure delight which I’m not going to spoil for you.

Just as crucial to Guacamelee 2’s personality is its superb visual design. I’d wager that its palette utilises every single colour known to man, and then some. While its quirky style is intact from before, the engine has undergone a rework, allowing for noticeably improved lighting and detail. No surface goes to waste here, with painstaking ornamentation carved into every square inch. Beautiful fauna. Gnarly skulls and fossils. Intricate Aztec designs. It’s a celebration of life and death and Mexican folklore as far as the eye can see. 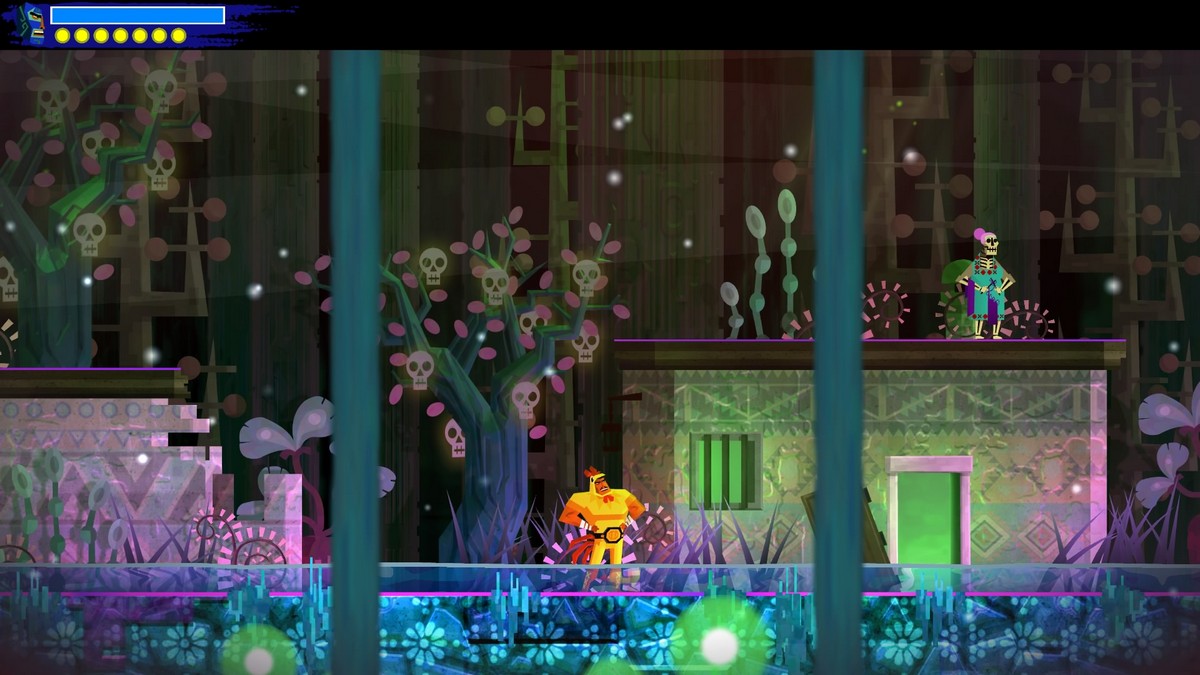 I only have a couple of niggles to raise. The story itself is rather simple, a mere vehicle for the wackiness that happens as a result. The somewhat unassuming Salvador isn’t as compelling of a baddie as the loveably evil Calaca. And although the game supports four-player co-op, this isn’t always an optimal way to play. While extra pairs of fists are a boon in fights, trickier platforming sections are made more difficult with multiple players due to the very precise timing involved. This is at least offset by the ability to morph into a bubble and nominate another player to do the hard work – and to be honest, I can’t think of a better solution.

DrinkBox Studios took their time with Guacamelee 2. It’s been five and a half years since the first game, yet this patient diligence has absolutely paid off. Unbelievably, my lofty expectations have actually been met. While not dramatically breaking any new ground, Guacamelee 2 is bigger and – dare I say it? – better than its predecessor in almost every regard. This is how you make a sequel.