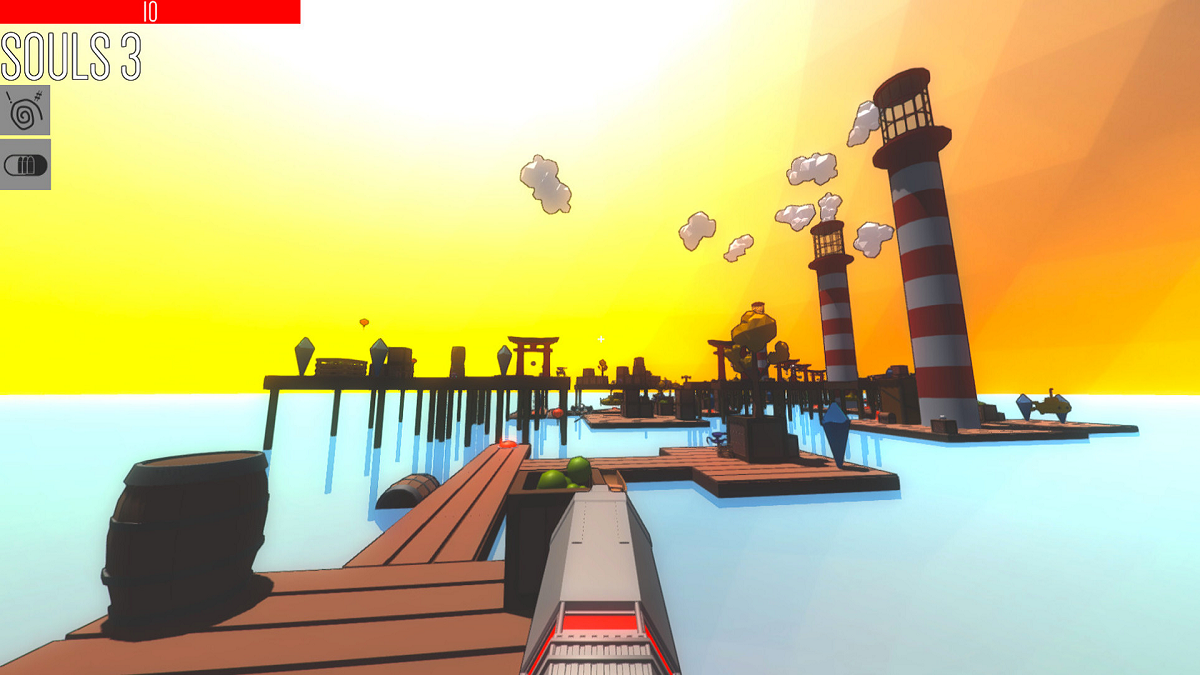 It’s hard to tell if I wish I liked Polygod more than I do, or if I wish Polygod was better than it is. Everything about its colourfully surrealist aesthetic, arcadey Quake-style gameplay and roguelite mechanics appeal to me, but sadly Polygod tends to prioritise its roguelite elements over its arcade shooter foundation – and it pays the price for it. What Polygod has to offer with its tough-as-nails gameplay and risk-reward power-ups is hard to appreciate due to how weak the shooting and movement feels. Quake, this is not.

Polygod’s minimalist style caught my eye on first blush – it’s very tonally different from almost any other shooter I’ve seen. It has a serene, quiet atmosphere, which is an odd juxtaposition with its rather brutal gunplay. From what I can gather of its story, you play as an assassin on a quest to defeat the seven deities of Polygod, but to the games’ benefit it’s all left very vague – it gives Polygod a lingering air of mystery which suits its bizarre world and characters. 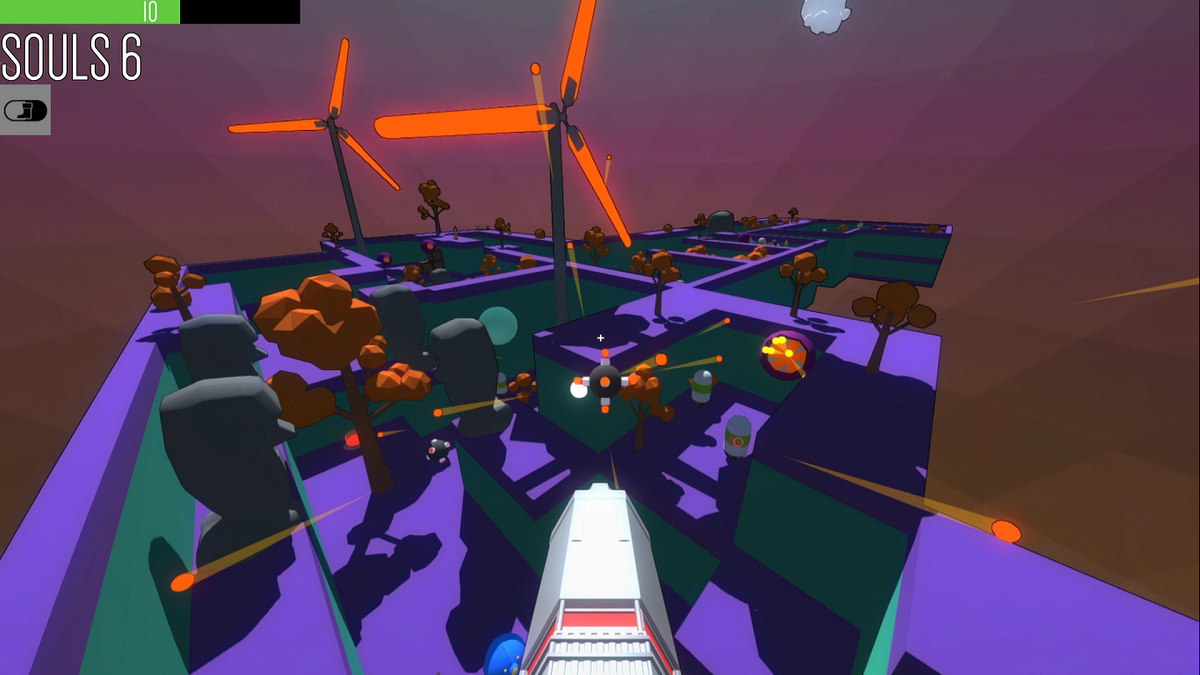 The real problem with Polygod is the foundation that this eccentric world is built upon – the actual shooting part. There is only one gun in Polygod, and it feels incredibly not great to use. The gun only shoots one bullet at a time and enemies often soak up a grueling amount of shots before they finally go down. Your crosshair and bullets are teeny tiny as well, and lining up shots proves difficult with a gamepad.

Where the twist lies is in the very roguelite-style “blessings” you can receive from altars scattered throughout each floor at the cost of souls you collect from killing enemies. But they also come with another price; many of the blessings you receive are double-edged swords with both pros and cons. Some blessings increase movement and shot speed while decreasing damage dealt, while others increase damage for every ten souls you have – which means you can’t buy blessings anymore if you want to keep dealing out lots of damage. Each blessing can alter your playstyle and significantly determines the fate of your run, and you can only purchase one per altar, so it’s key to choose wisely.

The monkey’s paw of every blessing adds a fresh new dynamic to the typical roguelite formula – but it would have been truly great if only Polygod had nailed the fundamental shooting. No matter how many blessings you buy to upgrade your gun into a most deadly weapon, the gunplay still feels like shooting a glorified tennis ball launcher. It’s a far cry from the otherwise similar roguelite FPS Immortal Redneck from earlier this year, which perfectly nailed the breakneck weapon design of arcade shooters. 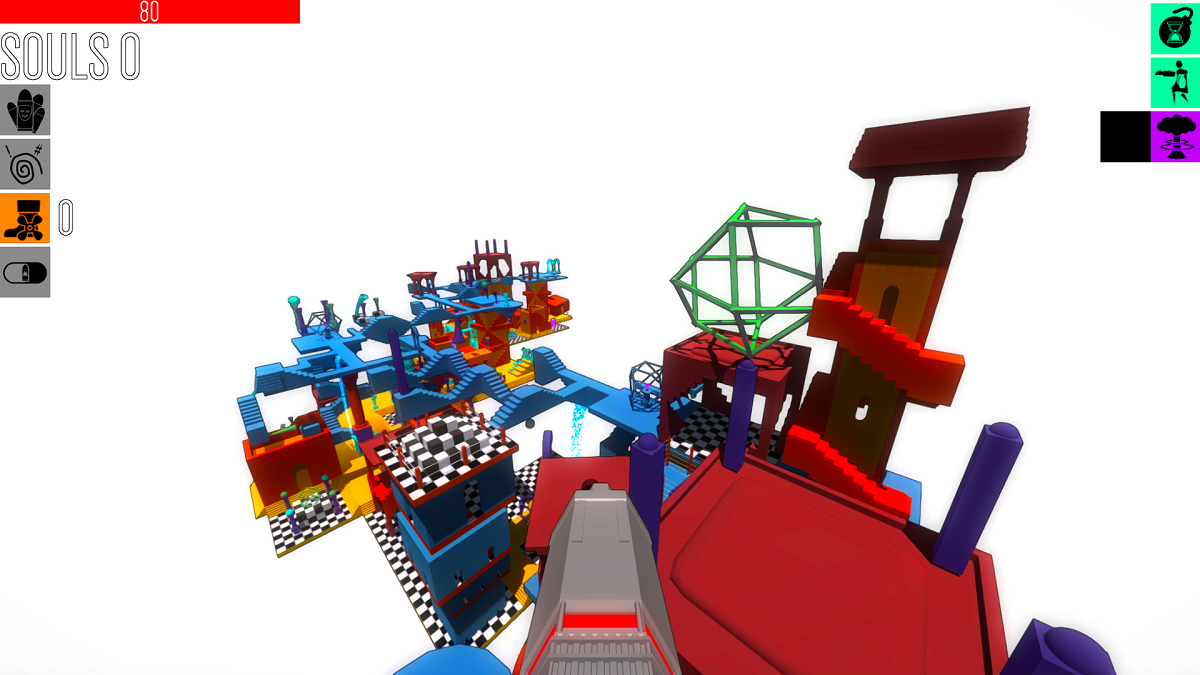 On top of that, the movement feels stiff to a huge fault. In Quake, movement has velocity – you speed through the level, whipping around corners and taking out enemies as soon as you lay eyes on them. There’s no real velocity or flow to Polygod’s movement; all you can really do is crawl along at a set pace. It’s to the point where strafing around enemies feels kind of ineffectual – even with speed boost blessings, movement feels sluggish enough that you’ll often get nicked by enemy fire while in motion.

In true roguelite fashion, levels are randomly generated. It does let you record randomly generated seeds of runs to replay and share with friends, which is a nice touch. Regardless, all levels starts to look pretty samey after a short time. Enemy encounters all too often boil down to keeping a distance as you shoot across a narrow corridor, taking enemies down as they file through as if they’re lining up at a Starbucks.

It almost feels like the game intends for the player to get up-close with enemies and manuever around their sea of bullets, but I’ve found that strategy almost always leads to instant death. If the game rewarded my risks, then I would take more of them – similar to how the recent DOOM rewards players that risk getting in the thick of battle with melee attacks that grant extra health when executed. But as it stands, Polygod has no issue with having you play it safe. While the bosses are pretty impressive in their scale, a lot of the time I found myself going through the same motions as I did fighting regular enemies. 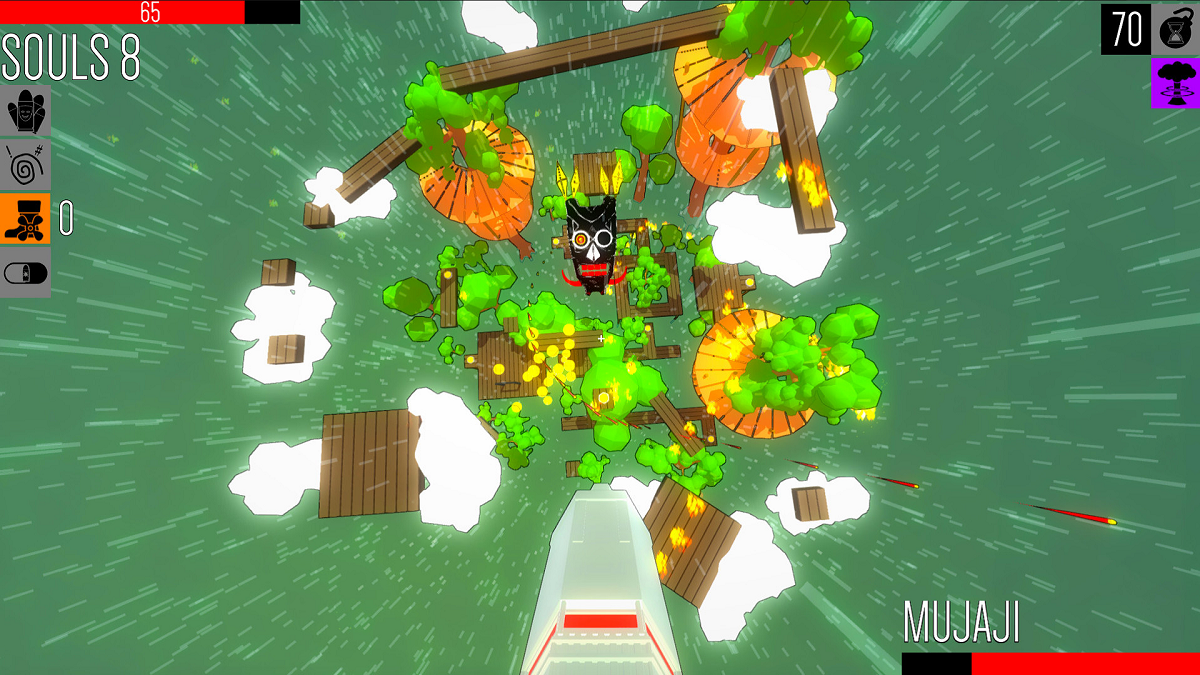 Polygod runs fairly smooth in docked mode, but good luck playing in portable mode; currently, the frame rate chunks up quite a bit, even with just one enemy onscreen. This is a real bummer when you’re trying in vain to dodge between bullets with a constantly varying, uneven frame rate.The Switch version does have the added benefit of gyrometer controls, but it’ll take a significant amount of fiddling in the settings to get the sensitivity to your liking.

Polygod’s double-edged upgrades are such an interesting concept and a smart addition to the typical roguelite formula, which makes the stale gunplay all the more frustrating. In the best first-person shooters, encounters feel like a dance – a fluid, freestyle contest that requires coordination in movement and aiming. In comparison, Polygod’s encounters instead feel like a stagnant little shuffle you’re forced to do at a school dance – stiff, awkward, and the same simple moves over and over again.