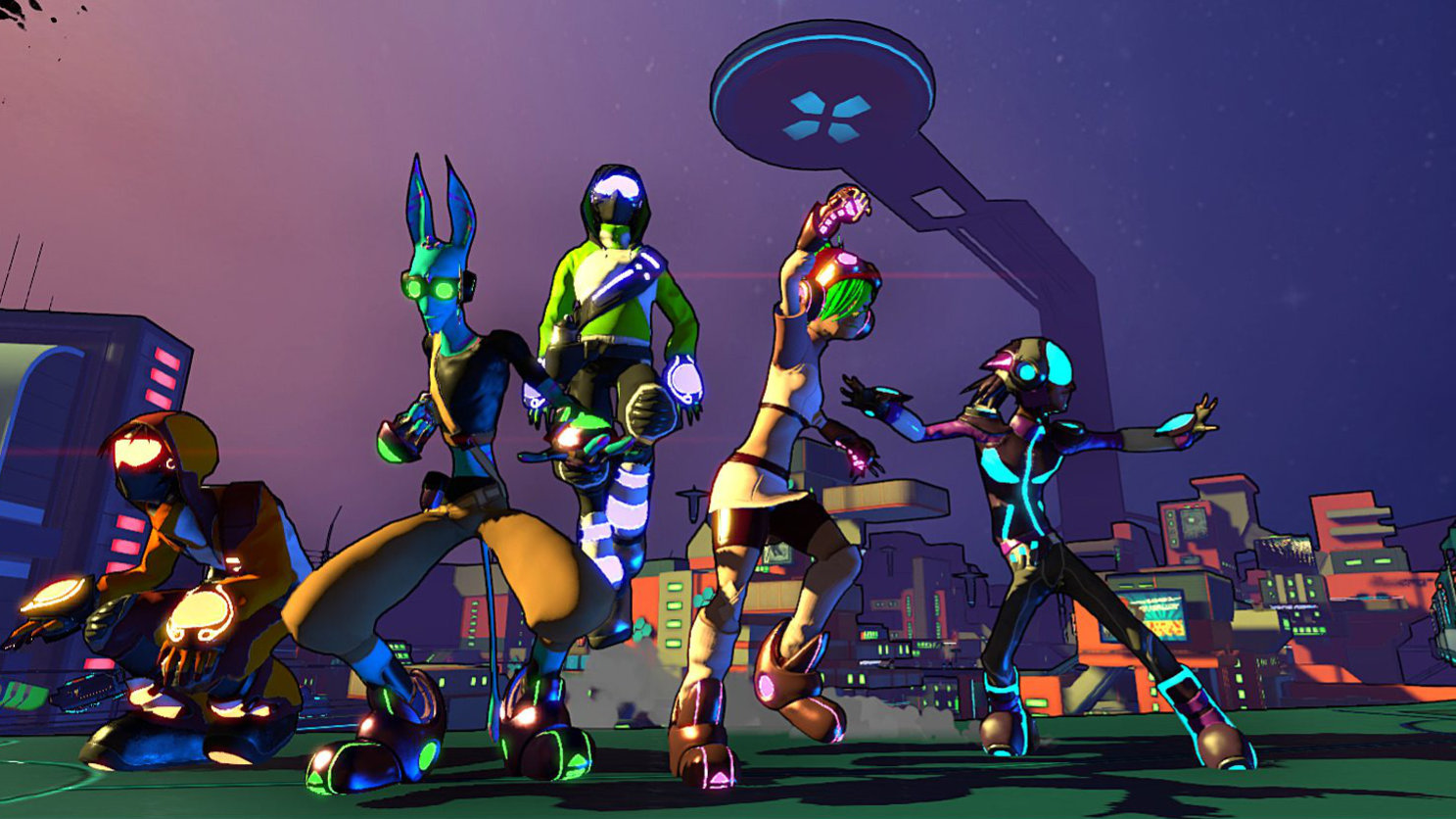 Hover should be more fun. You glimpse its potential as you zip its neon-soaked world, smash through holographic propaganda and string together combos that would have any SSX or Tony Hawk’s Pro Skater fan hot under the collar. Unfortunately, the magic is fleeting, and a string of design flaws have it mostly an exercise in high-contrast frustration.

You’re a clone. A hopeful recruit to a band of free-running resistance fighters known as the Gamers. Spiritual successor to Sega’s Jet Set Radio, Hover swaps roller blades for parkour whilst keeping the focus squarely on movement. You run, climb and grind your way through the vertical planes of Hover City, stopping only to spray paint a wall and make the government very mad. It’s Orwell-lite doused in dumb attitude, but getting around feels great, and Hover’s simple story is more than enough to satisfy its main conceit of time trials and collectables.

Controls on the Switch are odd. The game maps a single button to multiple uses depending on the position of the camera and amount of presses. Sometimes, you’ll be looking to initiate a quest and accidentally unleash a stream of spray paint at an NPC. Other times, your attempt to tag over one of the many propaganda posters the game’s antagonist, the Great Admin, has left littered over the city will leave you motionless, scanning a wall. It’s frustrating, but manageable once you learn to work with it.

Progress is relegated to those tasks given to you by the characters scattered throughout the several districts of Hover City. There isn’t much variety to quests, and most consist of a match of Gameball (the world’s frantic sport) or a minor tweak to a basic race against the clock formula. Missions are ill-explained and opt for cheesy character quips, delivered via tiny, typo-riddled subtitles, over any form of coherent exposition. 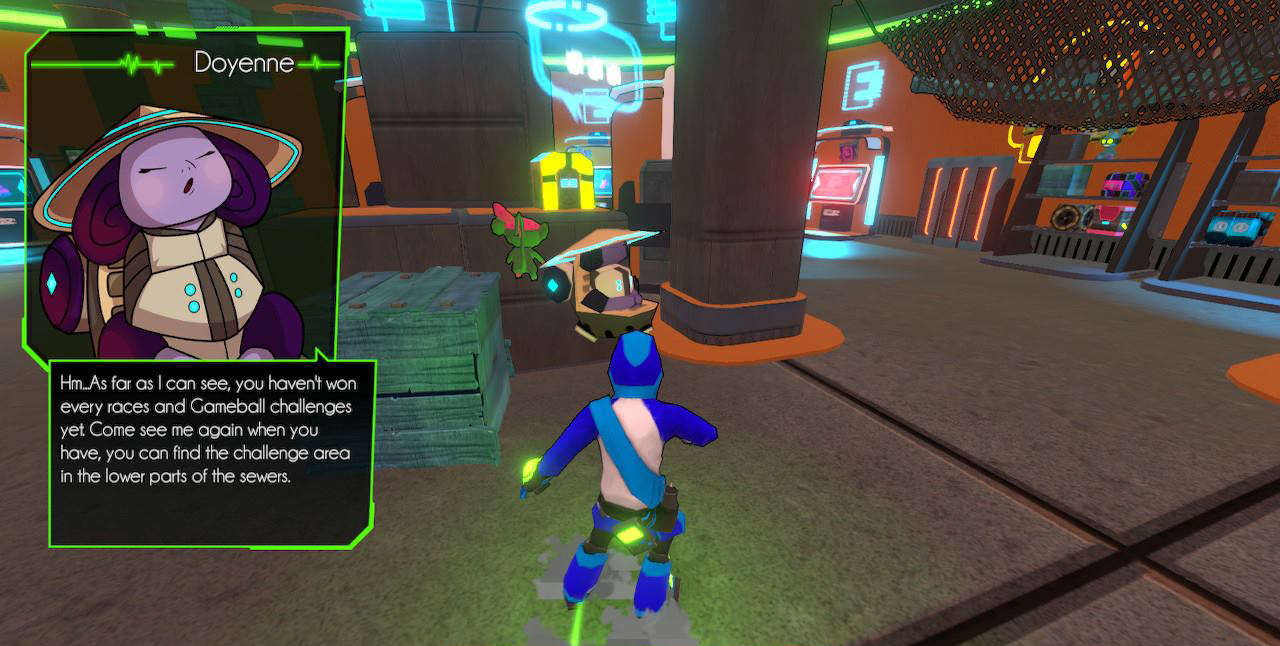 Hover’s upgrade system comes in those tokens you amass from completing missions and hacking special containers strewn about the world. Tokens are applied via the pause menu and can boost skills such as your speed, the height of your jumps, and the amount of resistance you’ll face when grinding. Unfortunately, there’s no way to quickly compare the stats of each token, hiding their tactical application behind a frustrating sift through menus and unwanted metagame of trying to remember if those upgrades you have stored are better than those already in play. 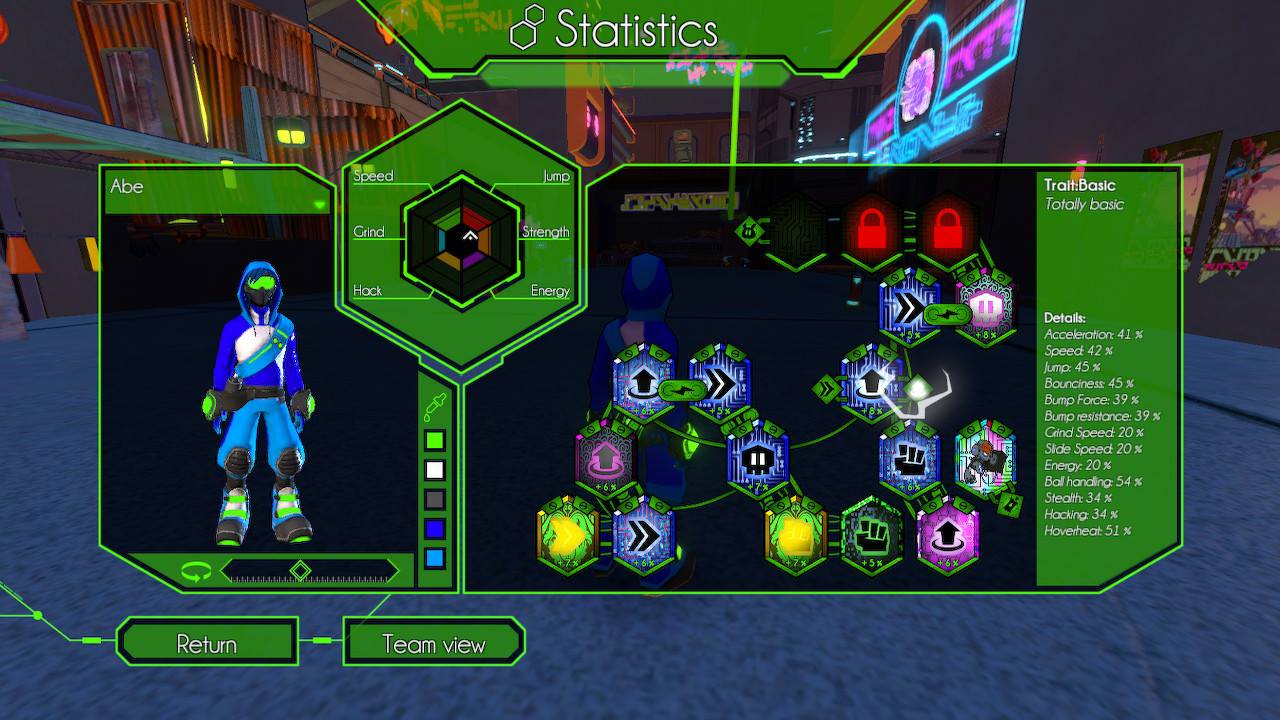 Multiplayer is a drop-in, drop-out system where other players can join your session and tag along for some free-form exploration or more organised challenges. Outside of the minor excitement of running with somebody else, the online feels flimsy and doesn’t add more than a spot of lackluster competition and tepid companionship.

Given a good design overhaul, Hover would be a worthy successor to the free-form, extreme sports classics of old. Getting around is great, and you can easily spend a few hours ticking off collectables. Dig in any deeper, and things start to fall apart. Hover’s repetitive mission structure and poorly designed menus have it only rose-tinted, not the rainbow it aims to be.