Life, death and your patience hang in the balance in this rage-inducing game.

Life, death and your patience hang in the balance in this rage-inducing game. 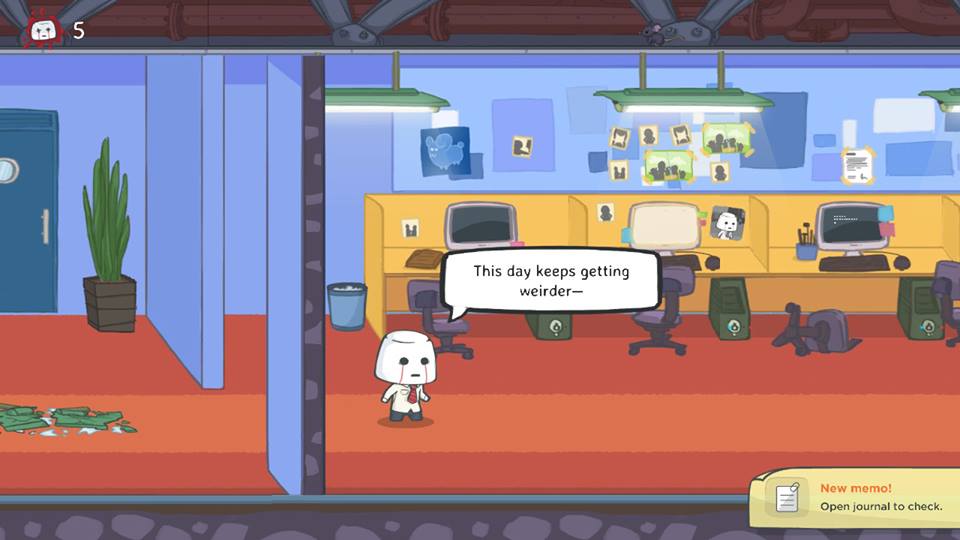 Death is as much a part of video games as it is life itself. So many games revolve around the idea of survival, of collecting extra lives, of shooting others before they shoot you. How far can you go before you die?

In Rage In Peace, it’s a matter of seconds. Developer Rolling Glory Jam has taken the concept of death to the extreme in this new Switch and PC platformer. But death isn’t just a part of the gameplay; it’s the very essence of the story.

Timmy is a boring, ordinary, marshmallow-headed man who dreams of a boring, ordinary death: in his pyjamas in bed. He’s met by a Grim Reaper, however, who has other ideas. You see, no matter what happens, today is Timmy’s last day on Earth, but whether he can make it home to die as he desires is up to your thumbs – and your patience. 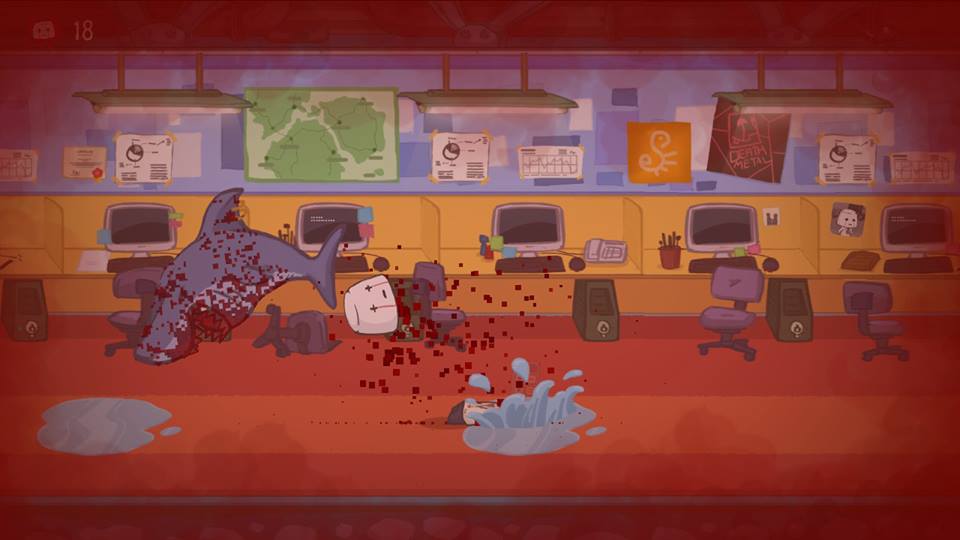 What ensues is a side-scrolling platform game where eccentric and gruesome deaths come at you from all angles – literally. Walking through a seemingly empty corridor through one of the variously themed worlds, you’ll have to dodge anything from ice spikes or sharks sprouting from puddles of water, to inanimate objects coming to life, spiky camels falling from the sky, and things that fly in so quickly you’ll have no idea what they are.

But while the game’s comic tone is somewhat successful, the action itself falls flat. Far from a skilful challenge of leaping and dodging, Rage in Peace is a game in which death happens so swiftly you’ll have no time to react. There’s little warning – visually, sonically, rumbling or otherwise – of impending one-hit doom, and Timmy’s only option is to jump. As a result, you’ll edge carefully through a level, die repeatedly and have to remember the order of hazards in order to progress. Rage In Peace boils down to little more than a memory test.

To make matters worse, the game appears to sadistically mock you at every turn. It might be funny the first time a bizarre obstacle is thrown your way, but the game takes great pleasure in blind-siding you: just as you dodge one thing, another is immediately thrown at you without fair warning. And nothing is predictable – the same hazards can behave in vastly different ways, so there’s no consistency and little opportunity to learn from your mistakes. To rub it in, the loading screen then gives you a pro-tip: “don’t die”. It’s enough to have you screaming with rage. 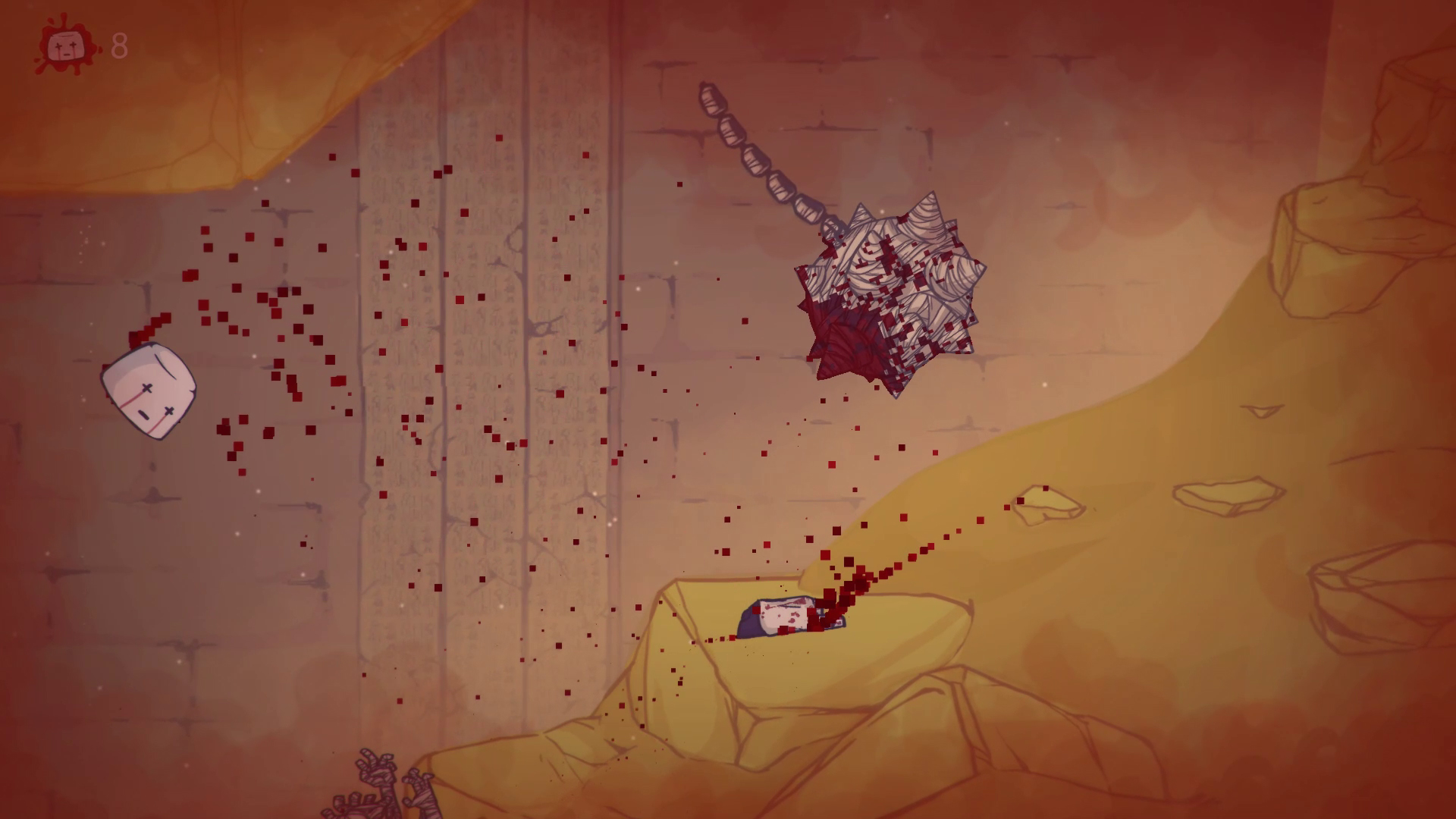 Dotted throughout the levels are bosses that represent the core gameplay in microcosm. Like the rest of the game, one slip and you’re dead. The only way to survive is to memorise their patterns but, no matter how quirky their cartoon design, fighting them just doesn’t make for an interesting game. Meanwhile, a death counter in the top corner is a disheartening, rather than amusing, reminder of your struggles.

Rage in Peace, however, has an unexpected saving grace: beneath all this frustration is a rather touching story. Beneath his ordinary surface, Timmy is clearly suffering psychologically, and the game as a whole is an exploration of grief and death that becomes genuinely philosophical. Collectables in the levels flesh out this story in surprising new ways – and it’s such a shame that the game actively punishes you for exploring in an attempt to find them.

The cartoon style is clean and polished, the game controls smoothly, and its heart is in the right place. Yet Rage In Peace is difficult to recommend when its core anxiety-inducing gameplay is based on such a tired and repetitive concept. Its quirky violent humour and thought-provoking narrative are simply not compelling enough to push Timmy though to the bitter end. We may all be doomed to die eventually, but why rage in peace when you can live happily ever after?