I didn’t think I was going to decapitate this many cheerleaders today. 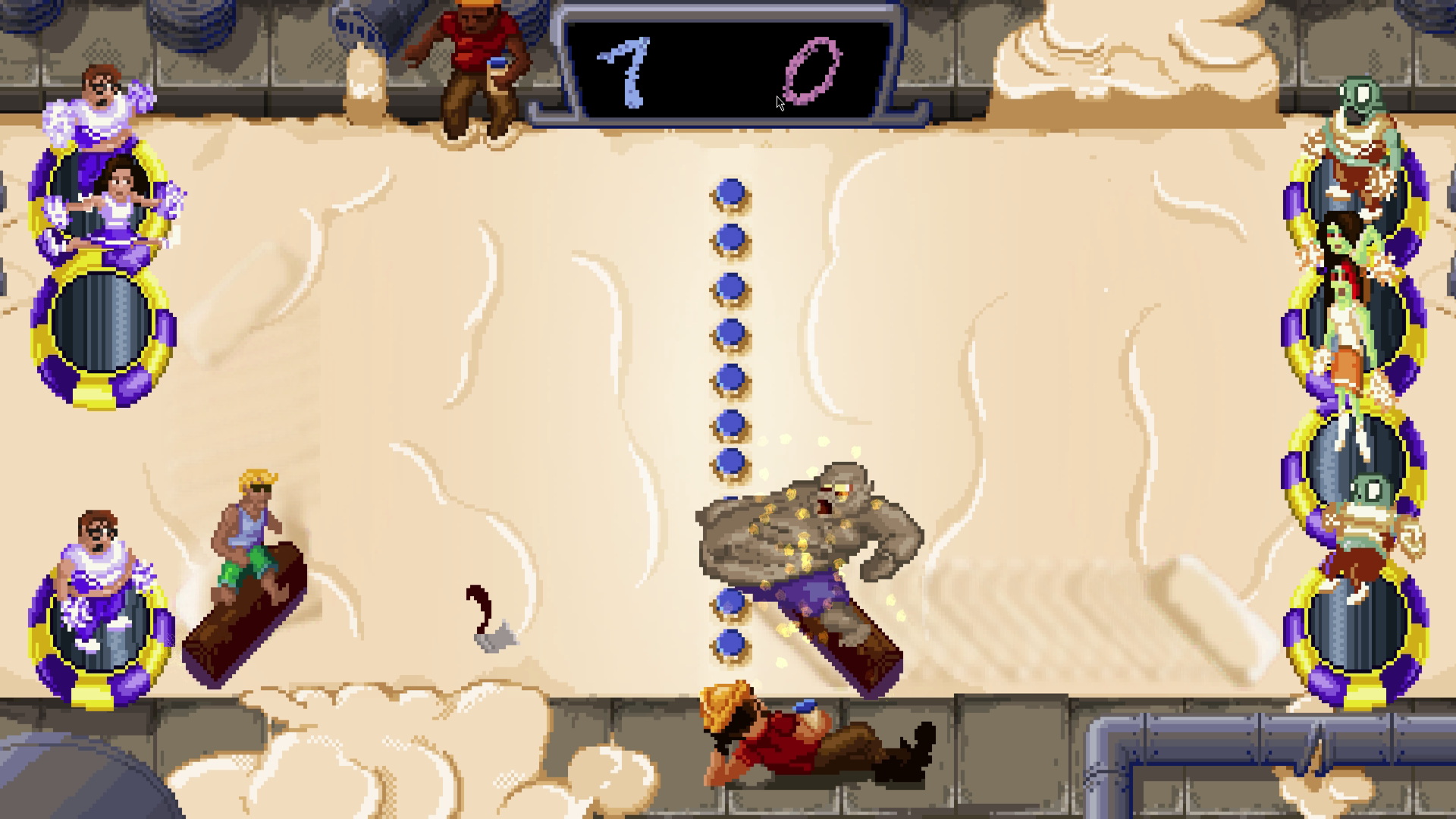 Log Jammers wears its influences on its sleeve. The first paragraph of its description on Kickstarter, where developers Mega Cat Studios successfully crowdfunded the game last October, calls it “a competitive, arcade sports game featuring axe-throwing, blade-catching action in the vein of Windjammers.”

Which it absolutely is. Like its spiritual predecessor, Log Jammers reimagines air hockey as a competitive contact sport. While Windjammers saw it as jai alai played with a discus, with both players working to curve their throws around their opponent’s defenses, Log Jammers takes it to the next level. It’s not necessarily the most logical level, but definitely a subsequent one. Players join a lineup of monsters and goofballs, balancing on a log in a pool of water as you throw razor-sharp axes at each other.

If you manage to sneak a thrown axe around your opponent and into their goal line, you score, and the first to reach 10 points wins the set. The longer a round goes without someone scoring, the faster the action gets, which is where being able to ricochet an axe off walls to try and sneak it past your opponent’s guard really comes into its own.

Imagine a professional air hockey league established in the years immediately following a particularly bizarre zombie apocalypse, and you have a vague picture of the Log Jammers aesthetic. Each of its eight playable jammers feels like a character from 1980s skateboard art – a surfer, a zombie bear, a peppy young girl, a skeleton in shades – and all of them take their sport deadly seriously.

You can play Log Jammers in normal mode, which plays everything about as straight as it gets, or in Cheerleader mode. I did not know what I was getting into when I picked Cheerleader Mode. It offers no in-game suggestions about what it might be. It could’ve been an actual cheerleading simulator, which would not have been the strangest thing in Log Jammers (the strangest thing is probably the fact that one of the stages is a swimming pool full of mayonnaise. Imagine the smell. I’m trying not to think about it).

Instead, Cheerleader Mode changes up the base game by putting a defensive rank of four pom-pom-waving, mixed-gender cheerleaders, living and undead, in front of your goal. Each cheerleader is good for absorbing a single thrown axe, thus preventing what would otherwise be a successful goal. They’re good sports about it, but Cheerleader Mode does involve a lot of random decapitations.

It isn’t a perfect defense, as a thrown axe can sometimes go straight past the cheerleaders’ ranks, but in practice, Cheerleader Mode lengthens most matches by giving both players a significant amount of room for failure. This is already a pretty forgiving game, since you don’t have to be particularly accurate to catch an axe, but the added protection of a layer of expendable cheerleaders serves well in matches where there’s a significant skill gap. It also involves a layer of expendable cheerleaders, which is such a great sentence that I had to type it again.

I put Log Jammers through its paces at a party over the weekend, and it was a hit. Like Windjammers, it takes about thirty seconds for anyone to get the hang of the controls, and it’s silly, gruesome, and eye-catching enough to get punters interested from across a crowded room. It doesn’t quite have the crisp feel of the game that inspired it, but Log Jammers has a certain insanity to it that I have to respect, like Troma films or weird street art. 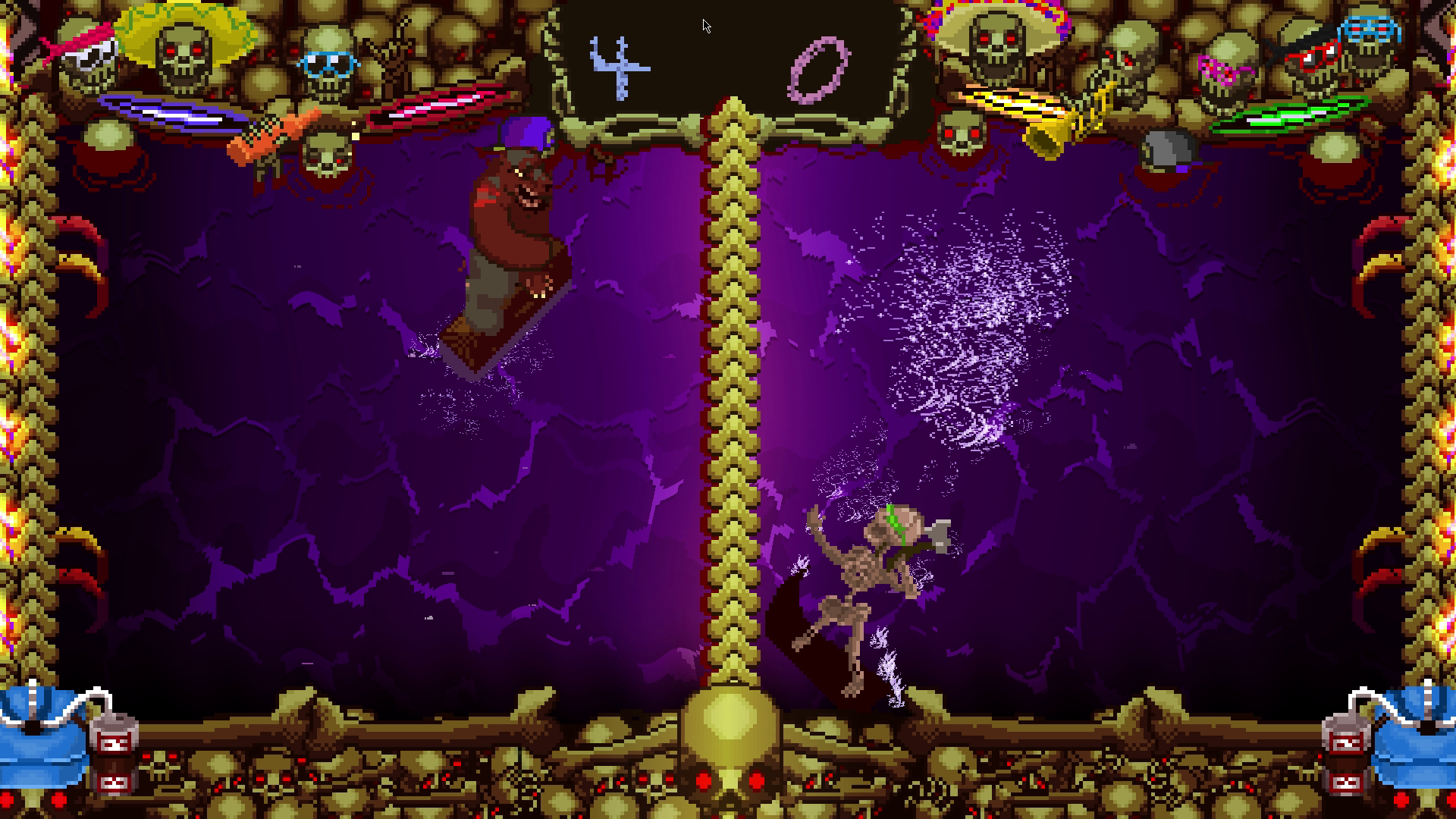 At the time of writing, Log Jammers has managed to start sending out its backer rewards from its Kickstarter, and it’s storefront is open on Steam, including a bare-bones playable demo. The demo isn’t particularly representative of the full experience as it only offers one character and the ability to play quick matches vs. the CPU. Don’t, therefore, base the entirety of your opinion on it.

The full game is simple, but it’s the right kind of simple. It truly comes into its own in a big group of the right kind of people. If you know anyone who will be immediately enthused by the idea of playable zombie bears, or who will laugh maniacally the first time they ‘accidentally’ decapitate a cheerleader, then Log Jammers is the game they didn’t know they were waiting for. You can stay up to date with the developments over at @megacatstudios and catch Log Jammers on Steam, currently scheduled for a February 2019 release.