Less of a strike, more of a whimpering swat.

A man in a leather jacket with spiked up, jet black hair and sunglasses enters the cubicle. As he turns around, pulls down his skin-tight trousers and plants his bum on the seat, a ‘now saving’ sign masks your eyes from seeing his no doubt unwashed and unkempt cock and balls. You see, Travis is too cool for that. He doesn’t give a fuck. His visit to the lavatory, or ‘crapper’ (which he almost definitely calls it) is just the saving screen for Travis Strikes Again: No More Heroes and yet it speaks volumes for the overall experience.

Tasked with controlling either the assassin Travis – or his equally ‘badass’ counterpart Bad Man (the pair have an apathy-hate relationship after Travis killed Bad Man’s daughter) – you’ll transport yourself into six different video games using the Death Drive Mk II. Each game has its own story and unique puzzle or theme which you’ll tackle your way through to get to the boss.

While Travis Strikes Again: No More Heroes has a fun premise of hopping through its varied game worlds – a core part of the series, although this time the games are inspired by indie games rather than big budget releases – it feels at best like a missed opportunity and at worst a groan-fest.

Grasshopper Manufacture have created an experience tonally familiar to anyone who’s played a game directed by Goichi Suda of Suda 51 fame. Suda’s specific style and humour runs through Travis Strikes Again: No More Heroes like it does with his previous games and will make your belly ache from either the laughter or because it’s causing you physical pain; I was the latter.

Every conversation in Travis Strikes Again: No More Heroes is diabolical. It builds on characters who throughout the series think they’re ‘too cool for school’ when in actual fact they’re more ‘standing outside the gates with a leather jacket too large for them, choking on their first packet of cigarettes and desperate for their classmates to see.’

The game wants you to know how clever it is by constantly breaking the fourth wall or referencing ‘nerd’ culture – so much so it mentions Deadpool at one point. What it ends up doing is creating a tone which feels like it’s so desperately grasping to get attention and be rebellious that it falls incredibly short of achieving that goal. Every sentence has more dollops of cringe than the last and will have your finger hovering over the skip button.

However, once you get past the waffle, there’s a fun game to be found. It even admits that there is too much dialogue. Once you have your electric blade, or baseball bat, in hand and start swinging at the bugs – these peculiar, skull-headed, humanoid creatures who represent in-game bugs – it’s really satisfying. Using a light attack and heavy attack, combined with a dodge and jump, Travis Strikes Again: No More Heroes starts finding its feet as you embrace the traditional hack-and-slash elements.

As well as the light attack and heavy – which feels really nice as you crash into the creatures – Travis and Bad Man are armed with skills which can do all manner of things. From slinging one enemy into another to healing yourself or slowing down enemies around you, there’s a whole combination of skill sets you can map out as Travis collects more chips – items which widen your repertoire.

Another layer is the special meter which fills up the less you get hit, helping you deal more damage to the troublesome pests. Alongside that is an ultimate move which can unleash a ton of damage. What starts off as a simple system evolves nicely into one which you can quickly master. The only thing that can stop you in your tracks is refilling your blade’s energy bar, something which only takes a couple of seconds with the Switch’s analog sticks (or motion controls if you’re feeling agile) but it’s enough to make sure you’re considerate of your position. Which is exactly why the camera is a bit of a pain.

Travis Strikes Again: No More Heroes’ uses the common tactic of alternating the camera position to make you aware of transitioning through an assortment of game worlds. However, because it tries to cater for numerous camera angles, it never masters one. On the side-scrolling platforming sections, Travis’ jump and movement is too quick for the camera to catch up. With the top-down angle, enemies will often attack from outside your view, with the only notification being a fuzzy red line on the screen. It all feels a little dated, like something from the PlayStation Vita. 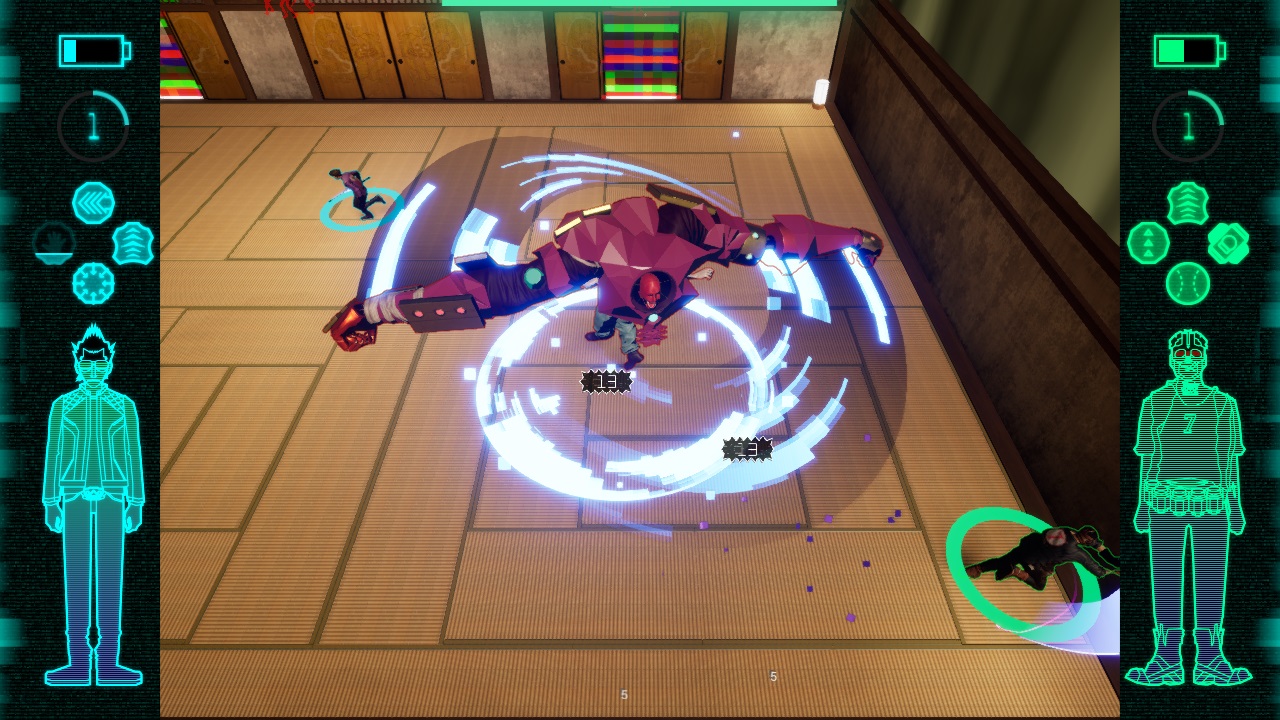 This similar, disjointed feeling continues with the art style for each world which doesn’t really stand out, aside from a digital corruption aesthetic which valiantly tries to marry each world together and give the game its own personality. Unfortunately, it all comes together in a bit of a bland way, with none of the worlds standing out as memorable or exciting.

Travis Strikes Again: No More Heroes has a tone flooded with immaturity and unoriginality, which is a shame because underneath it all is a solid combat system screaming to be recognised.