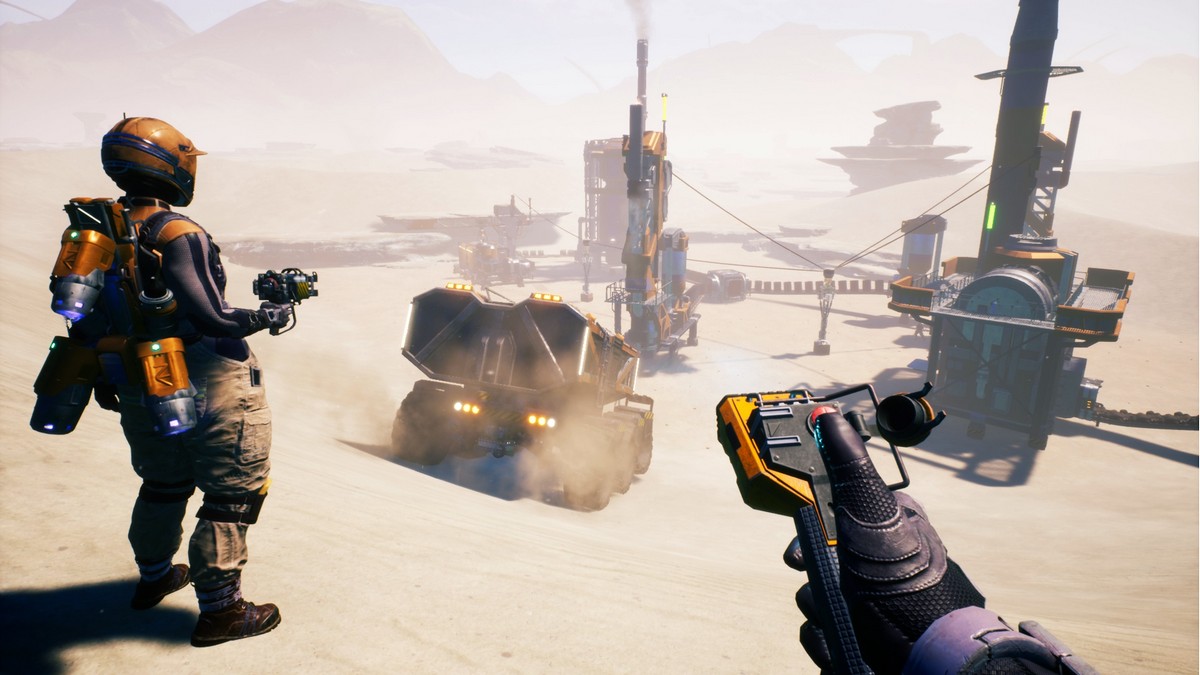 Hot off the production line is Satisfactory, a first-person factory builder that sees you venture to distant alien worlds with the objective to construct, explore, exploit, and automate.

You play as an employee of FicSit, a callous corporation that appears hell-bent on industrialising every alien planet within its reach. Deployed with no supplies or sense of direction your goal is to complete ‘project assembly’ and construct a factory for harvesting and manufacturing resources. As your operation extends you’ll hollow out the planet’s natural resources, spew toxic fumes into its air and slaughter many of the inhabitants. A typical day at work, right? Besides a fleeting tutorial there’s nothing further provided in the way of a narrative. It’s uncertain who you’re playing as, or what your personal motivations may be, but Coffee Stain have teased that a full story is coming. 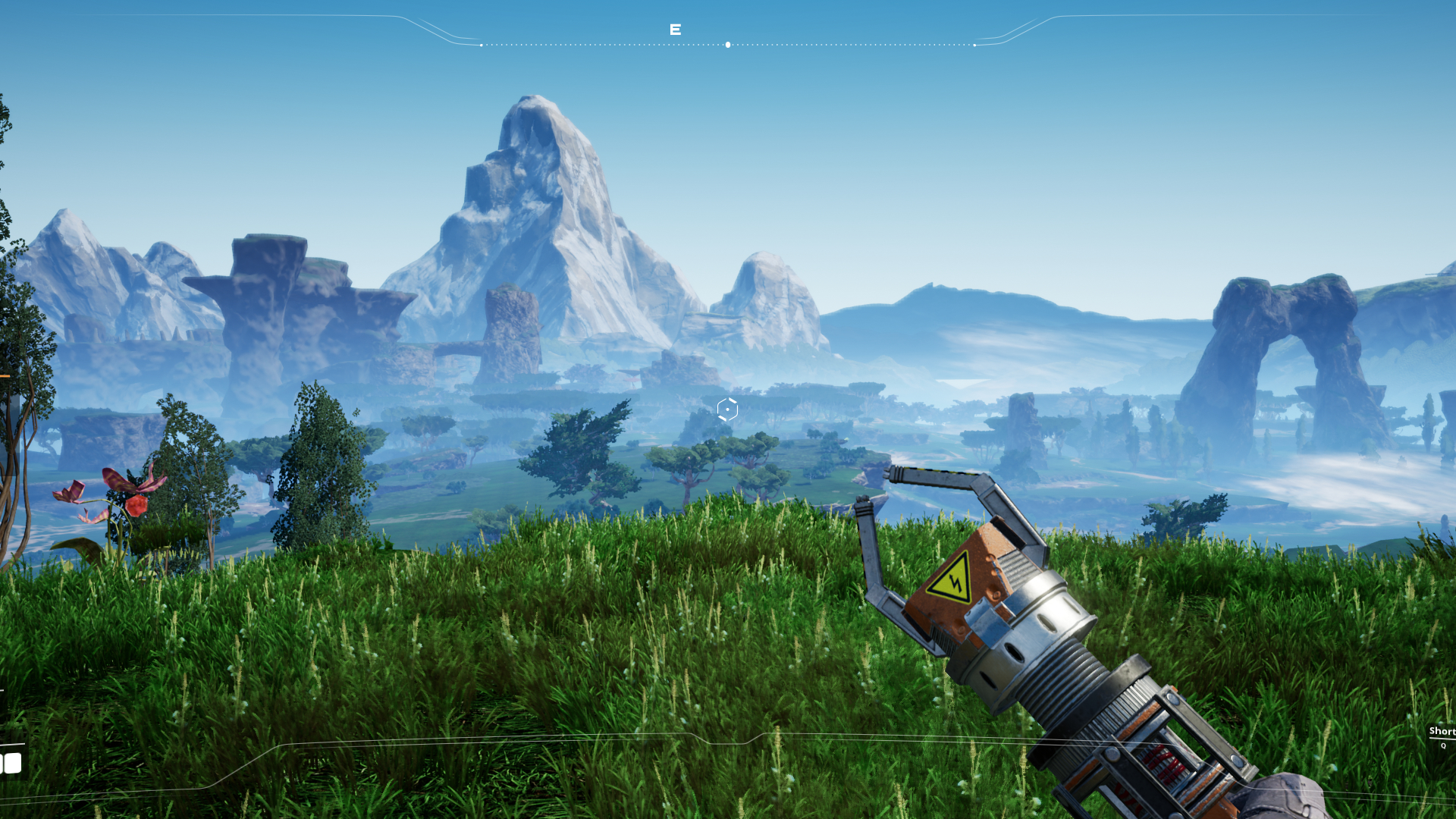 Before you get to work you have three biomes to select between, each presenting its own set of pros and cons. These are Grass Fields, Northern Forest, and Rocky Desert, pretty self-explanatory stuff. The Rocky Desert, for example, offers a vast sandbox (see what we did there?) for you to explore but natural materials for fuel are scarce. Green Fields is flat and perfect for building, but as its materials are spaced far apart you’ll be doing a lot of walking. Each setting feels distinct in appearance but I wish the variations in gameplay ran a little deeper. Adding survival aspects such as having to seek shelter from sandstorms and manage water intake would have provided an experience that felt individual to the Rocky Desert stage, for example.

Limestone, copper, and iron are your primary resources and initially you’ll have to chisel them from nodes by hand before you can set up a production line to extract things for you. Your primary goal is to make your factory run as efficiently as possible and advance through the six tiers of upgrades. Each tier offers you new blueprints for equipment, workstations and materials, depending on a set amount of resources for you to progress. These unlocks always give something to strive towards and let you toy with new ways of making your factory more efficient. There’s a total of six tiers at present (with a tier 0 tutorial stage) but the developers have stated that they plan to expand upon this. 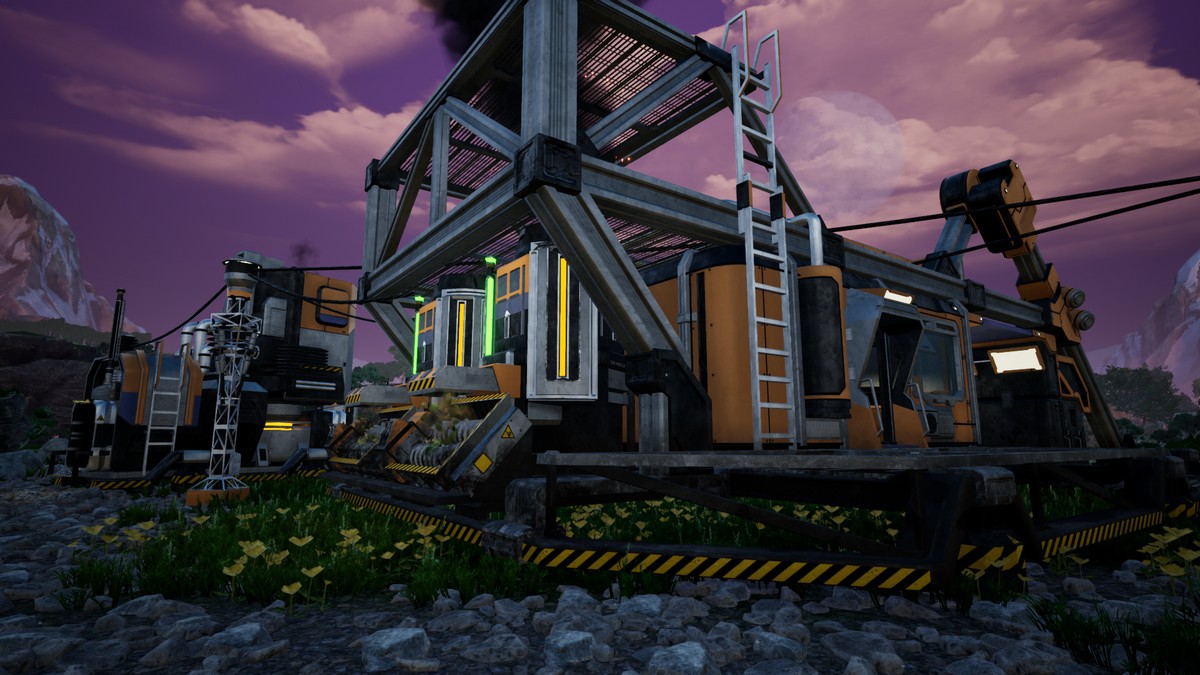 Satisfactory distances itself from similar titles such as Factorio with its first-person perspective, in contrast to an isometric perspective. Watching materials churn out of our machinery like clockwork and zip down a zig-zagging maze of conveyor belts feels so satisfying to watch up close. Navigating your surroundings isn’t as simple as a swipe of a mouse, however, and the excessive pacing to each machine is easily this perspective’s biggest drawback.

Exploration is a cornerstone of Satisfactory as resource nodes and biomass materials require you to venture out into the open world. There’s incentive to explore as items such as rose petals and mushrooms can be analysed at your hub to produce further blueprints. There are also special items such as slugs that can be used to overclock your machinery. These open spaces are wonderfully detailed and I especially enjoyed the Grass Field setting that features distant mountainscapes and gushing waterfalls. I wish that there were more connected aspects involving both factory building and the open-world material hunting. I’d love to capture some of the alien creatures and use them as a means of transportation, for example. 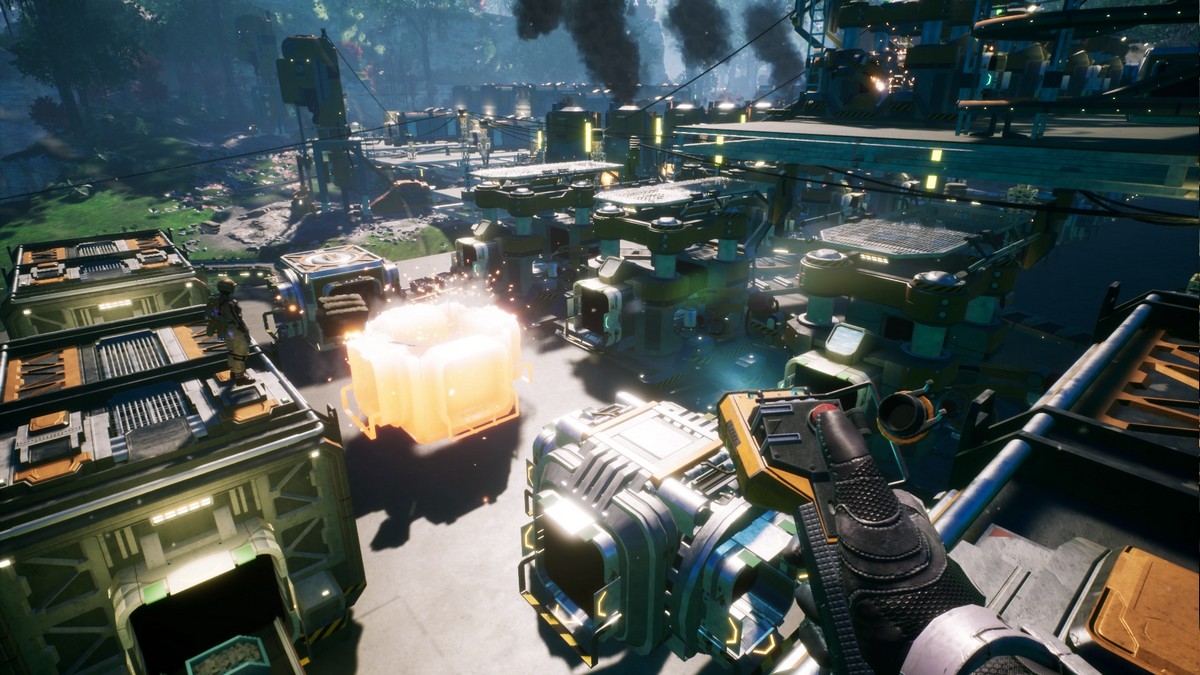 Combat is by no means the main focus of Satisfactory but there are a few overhauls I’d like to be made on the road to release. The weapon selection at present is pretty lacklustre and I found earlier encounters awkward as it forces you to use a melee weapon without a robust lock-on system. The threat here is minimal, however. Most alien creatures will go down after a few carefully timed blows and there’s nothing that puts you at risk when you are in the middle of production. I would have expected at least a little bit of resistance for scarring the planet’s ecosystem!

The experience is fully playable in co-op and you can choose to play with a friend or strangers. We couldn’t try this out, sadly, as no sessions were available to join during the few times that I searched. Whether this was a technical problem or the fact the title had only been out for a handful of days is unclear. I imagine that having a friend with you will help to smooth out the grind and will be an added means of crowd control. The developers have stated that the multiplayer in its current state is a little sketchy and that dedicated server support is coming.

It’d have been really ironic if Satisfactory turned out to be… well, less than, but Coffee Stain Studios have pulled things off. Building sprawling factories towards the sky feels addictive and I love the open-world setting and first-person perspective that it introduces to the genre. The combat does need improvement with a limited selection of weapons and little is present in the form of a cohesive narrative. That said, I had a great time with Satisfactory and will be checking in over the coming months to see just how the project blossoms.