Are you metal enough? 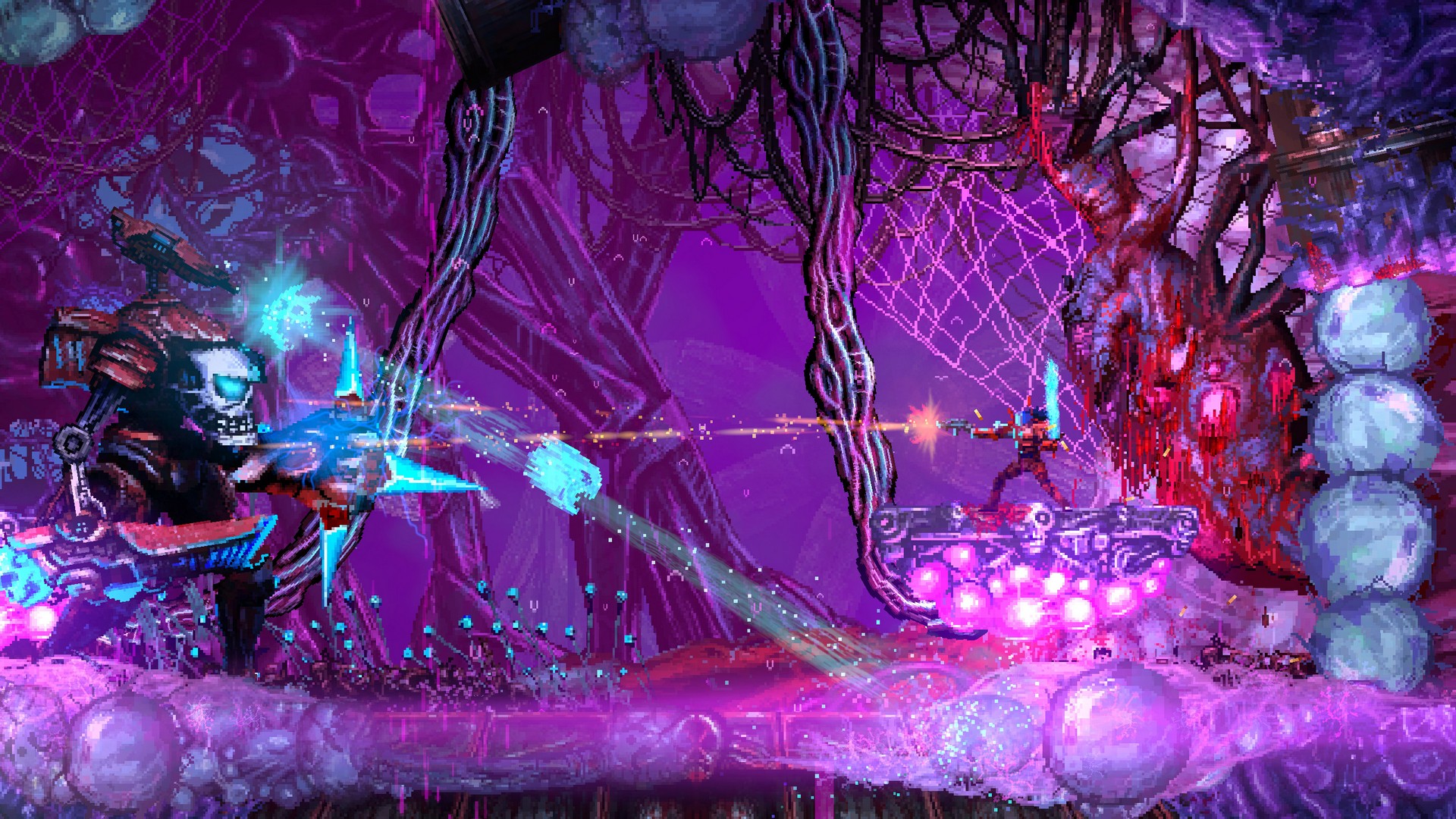 Like an unofficial companion piece to the recently released Blasphemous, Valfaris goes full-steam into a dark violent sci-fi world as much as the former did its bizarre Dark Ages fantasy. Both games also come across as a fever-pitched ode to the classic Heavy Metal themes of the 70s and 80s—both the music and, especially, the magazine. Valfaris boils over with heavy metal influences to the point of nearly being satire. 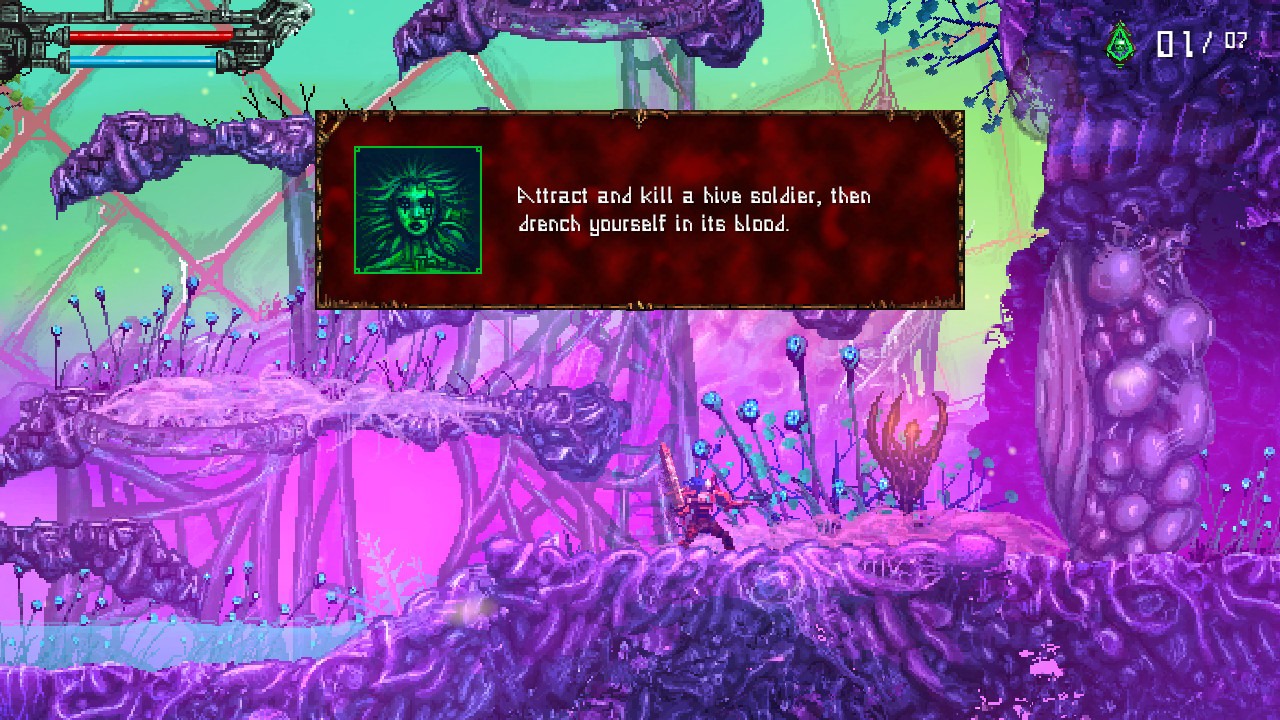 As the follow-up to Slain: Back from Hell, it’s clear developer Steel Mantis has a strong affinity for metal-infused, retro-styled brutality. Valfaris is an unabashedly spot-on throwback to the halcyon days of 16-bit gaming. The pixel art graphics are surprisingly detailed and well-animated. The crazy landscape full of alien death traps look great and the variety of enemies—most of which are violent deranged native animal lifeforms—is impressive.

As the musclebound, grimlord cyborg killer, Therion, you’re on a quest for revenge against the man who stole and mutated the hell out of your homeworld, Valfaris. Or something like that. Honestly, I couldn’t keep track. The important bit of drama here is that the insane killer is (insert dramatic music here) your father! 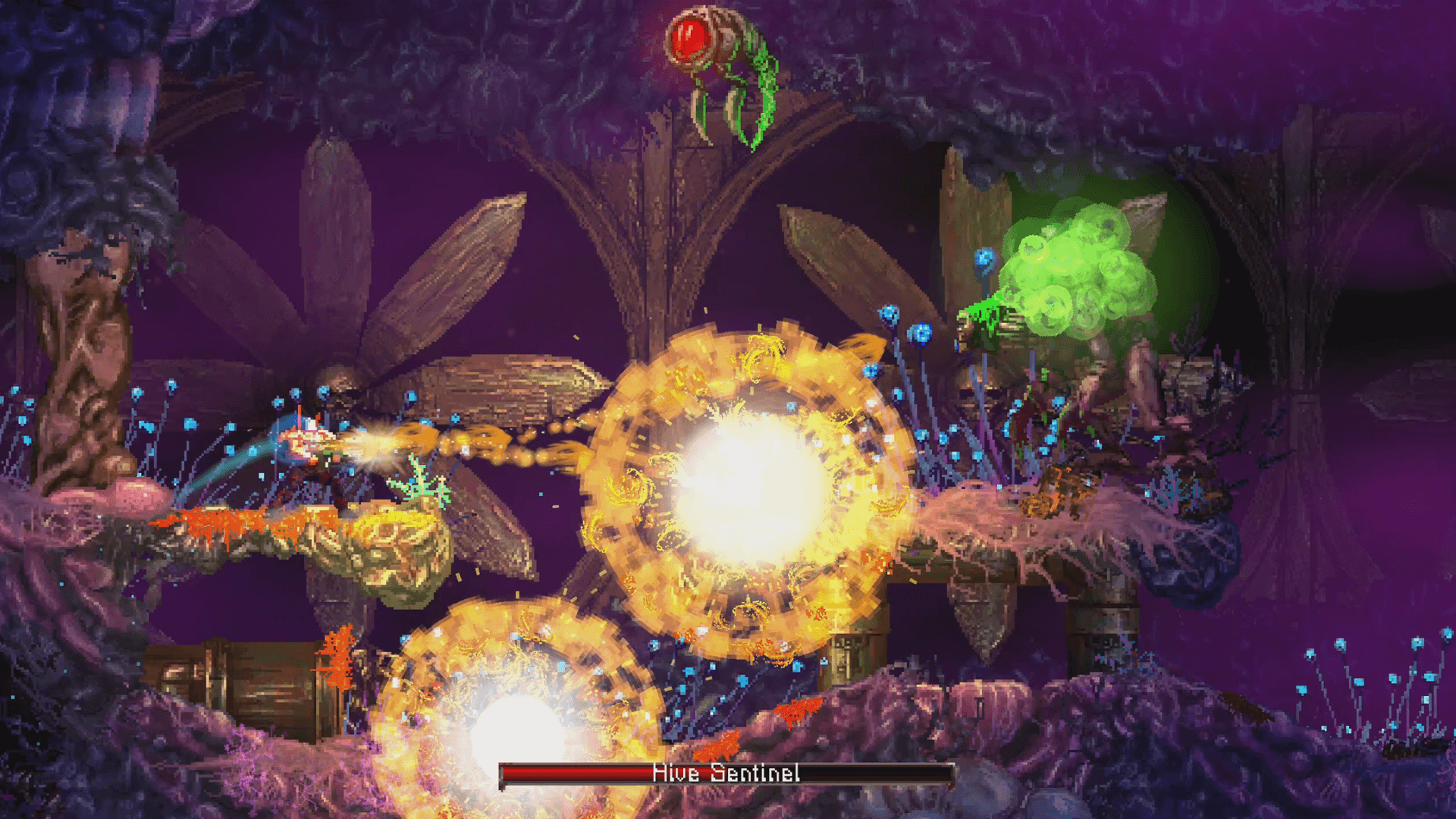 Therion’s sole ally in his quest for blood-coated revenge is his trusty AI companion, a hot naked hologram modeled after a goddess. There are plenty of new weapons to gather across this wild alien landscape, each allowing for new and interesting ways to kill and adapt. Therion is a two guns, one sword sort of guy and that sword is vital for not just causing gobs of gore, but cutting the energy used as ammo for your special weapons and shield out of enemies.

Each weapon can be upgraded further with Blood Metal (because of course) and golden tokens enable you to save at special fountain-like structures spread through the game. At first glance, Valfaris feels as if it’s structured like a Metroidvania, but while some of the levels are more open than a standard old school side-scroller, this is largely a very linear game. 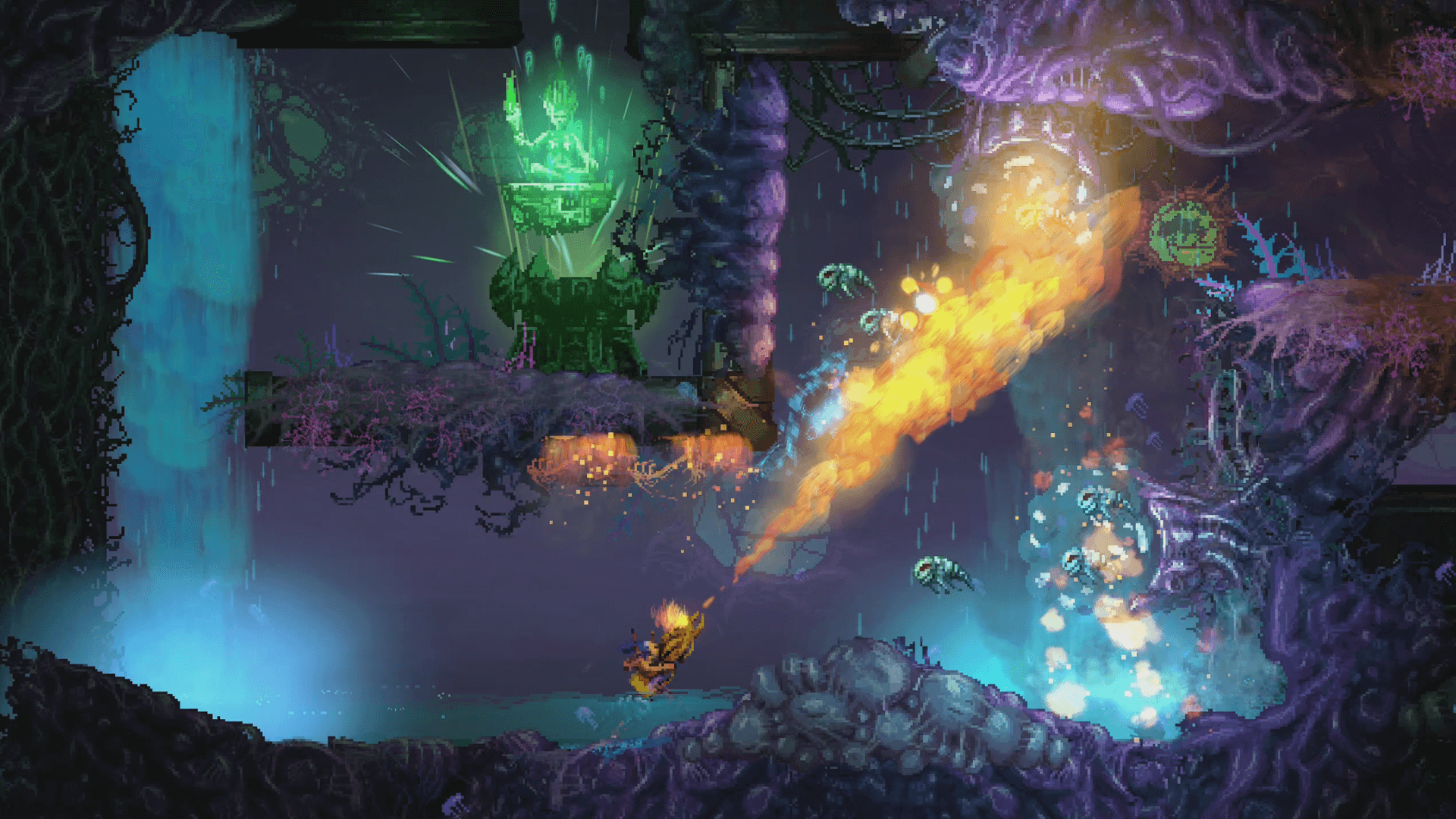 It also tends to move in predictable beats. There’s a bit of exploration, but the game is heavily centered on locked in fights against a ton of minor baddies, frequent boss battles, and forced scrolling sequences that require incredible finesse, timing, and patience. While some gamers love old-school, brutally difficult challenges, anyone more interested in taking things down a notch will be hard pressed to stick it out to the end.

There are no difficulty level choices, so you’re stuck with whatever the game throws out you. Boss fights can be incredible tests of patience, as cheap deaths mount up quickly. The forced scrolling bits are some of the most frustrating and frantic levels of that sort since Ori and Blind Forest (damn that tree-climbing sequence). 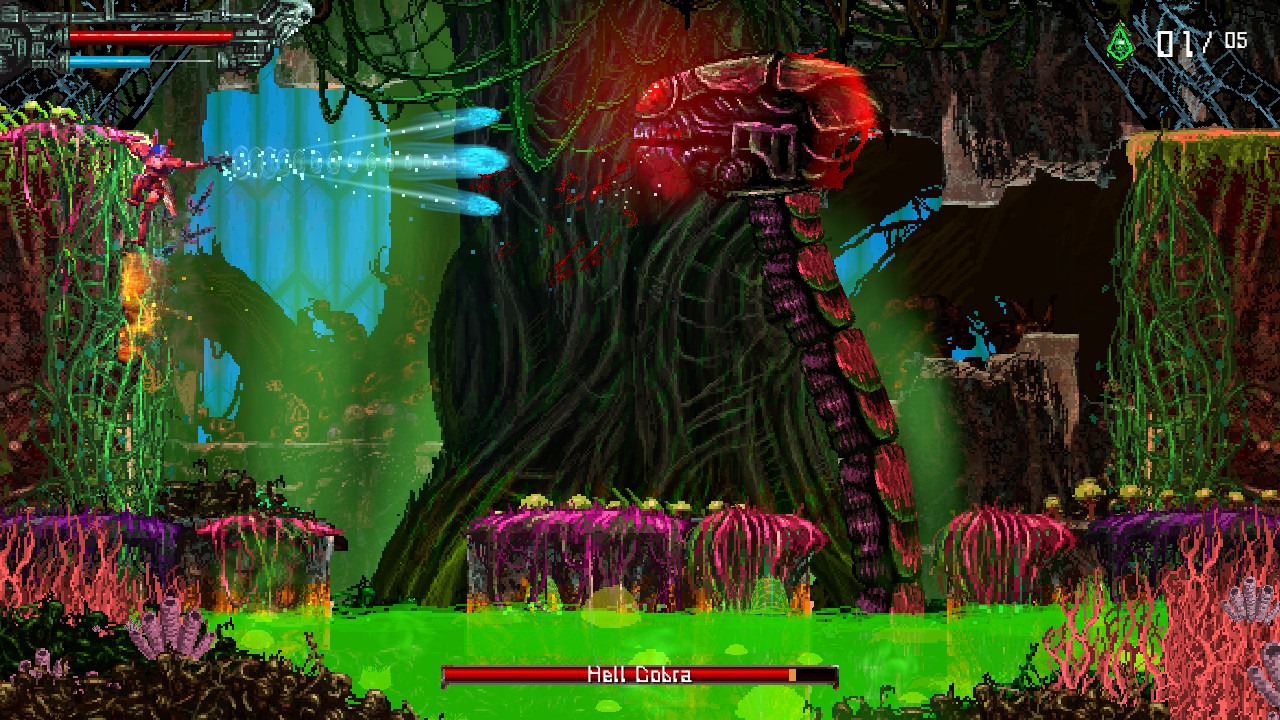 Some of the difficulty really is just learning the game’s timing and controls. The shield is vital, for instance, but runs out of energy fast. Enemy attacks and your weapon fire aren’t beholden to platforms (they pass right through), so avoiding attacks is purely a matter of moving quickly enough.

Some of the issues could have been mitigated just by bringing the fairly simple controls up to modern standards—especially aiming. Valfaris locks you to the very old and imprecise eight directions of a classic D-pad. It’s not a twin-stick game and the only way to stand fast while aiming is to ‘shield aim’ which allows you to aim without moving while the shield is up. This isn’t a great solution, as it kills your weapons energy bar quickly and shooting at an angle means standing in the exact right spot to hit the target. 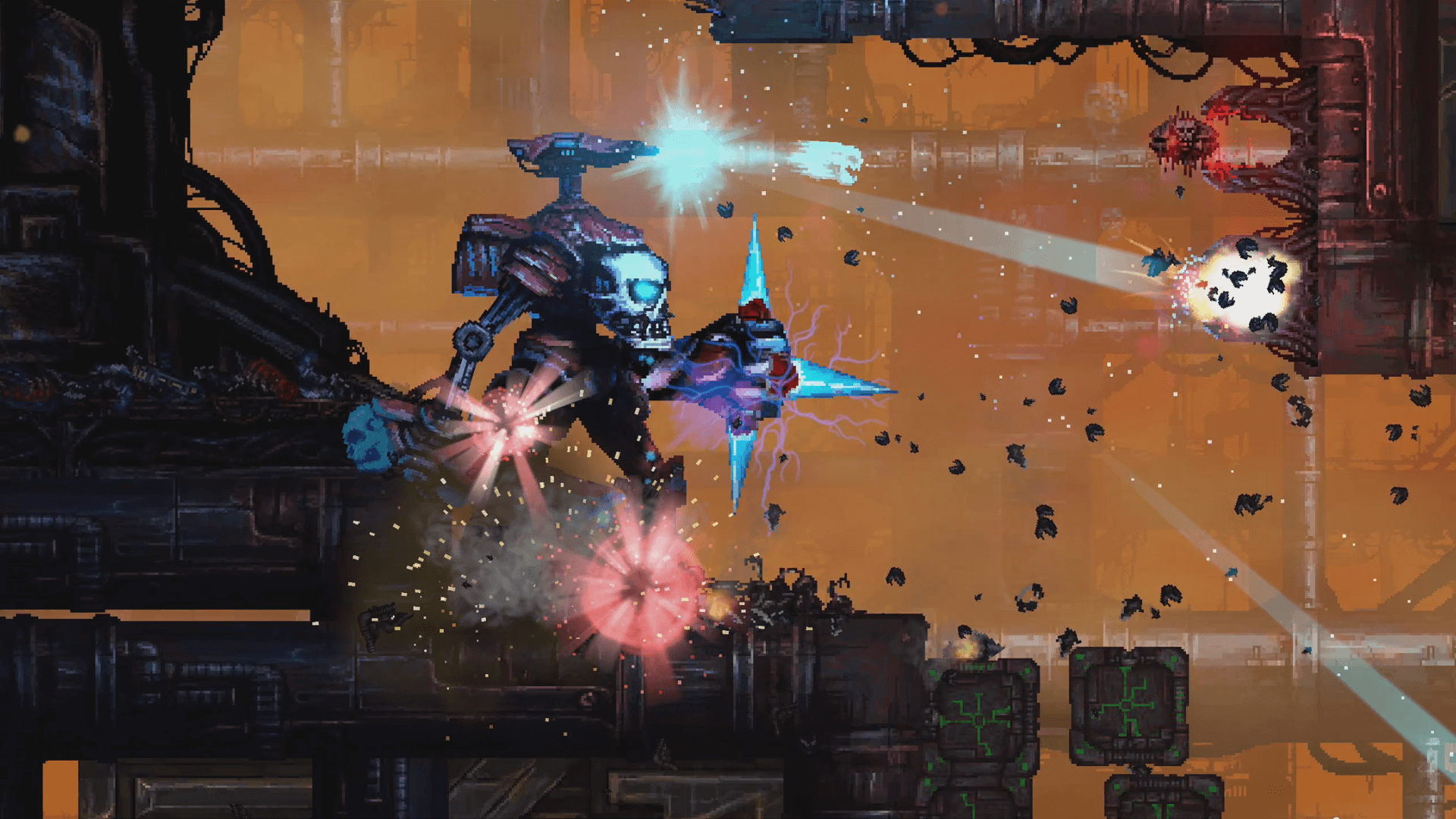 While the save game tokens are thankfully handed out fairly generously, save spots are sometimes spaced so you’ll have to get all the way through a really frustrating section before reaching the next. So, when things get really difficult, expect to have to plow through an entire section multiple times before being able to proceed. Blood metal is another problem. The game is so stingy with this vital substance that upgrading weapons is a slow, arduous trek.

Controls occasionally feel slippery, especially around the ledges of deadly pits. As frustrating as Valfaris can be, it’s also surprisingly addictive. Entertaining even. It’s a throwback to be sure, but clearly done with a palpable sense of love for the genre and bygone era. 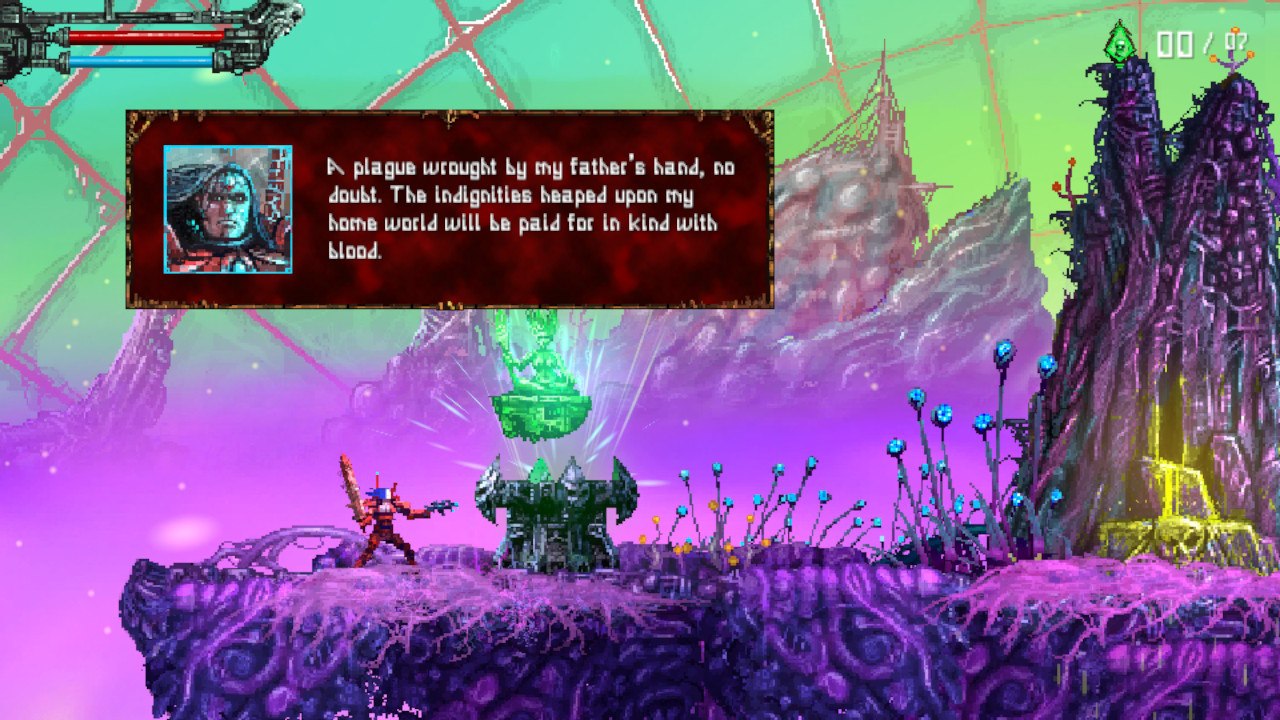 Valfaris will likely drive gamers to distraction and frustration with its series of brutal and difficult bosses and villains, crazy chase sequences, and general sadist design. Yet, the game’s pristine devotion to emulating a classic 16-bit side-scrolling shooter has a distinct charm. The weapons and enemies are diverse and fun, the world is twisted, and the sheer over-the-top action and storyline prove entertaining enough to work through the pain and still end up having fun. Mostly. When the game isn’t making you want to twist your controller in half.