A vampire narrative with not quite enough bite.

A vampire narrative with not quite enough bite.

You’re a fledgling, a newly converted vampire asked to join the main power in New York City, the Camarilla. The Camarilla are basically vampire traditionalists, holding onto medieval methods of punishment and control to maintain power in supernatural New York City. As one of their new recruits, you’re quickly tasked with building up your own coterie, a team to keep you and each other safe from the thousands of hazards of vampire culture. 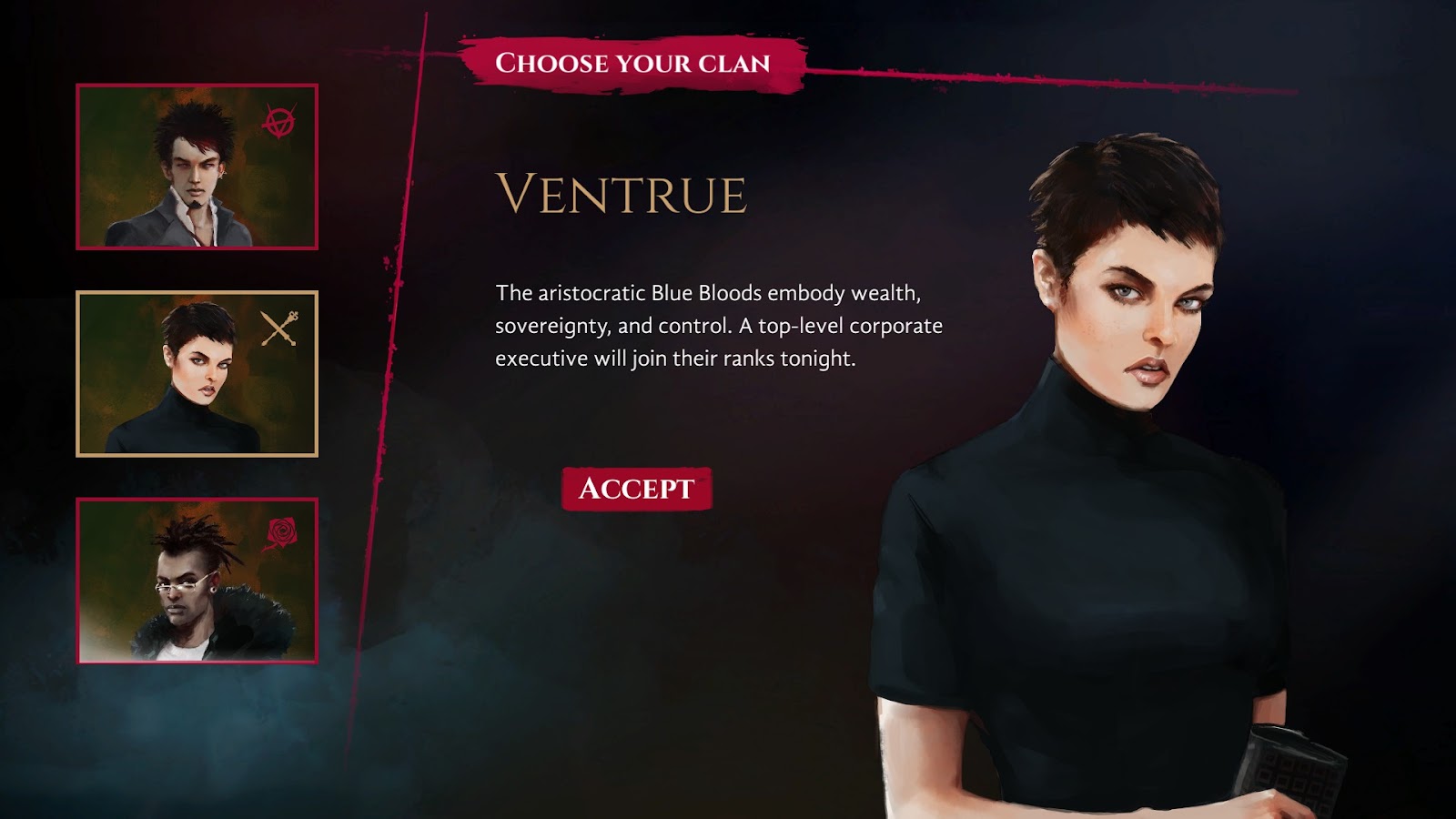 There are three playable characters that have their own prologue, side quests, and abilities that pop up in dialogue. Using abilities increase your Hunger, which creeps in from the edges of the screen reminding you to feed. Not feeding risks aggravating the ‘Beast’ inside you, compromising the security of the masquerade. The characters are more for flavour than anything, with abilities only providing different ways to solve encounters with the same overall result.

I chose Amanda because no better real-world representation of a vampire exists than a top-level corporate executive. As a member of the Ventrue Clan, she could take bullets with her fortitude and dominate any individual to do her bidding. Her prologue and side quest centre around her past and reconciling with it, but it wouldn’t be worth playing all three if hers is any indication. 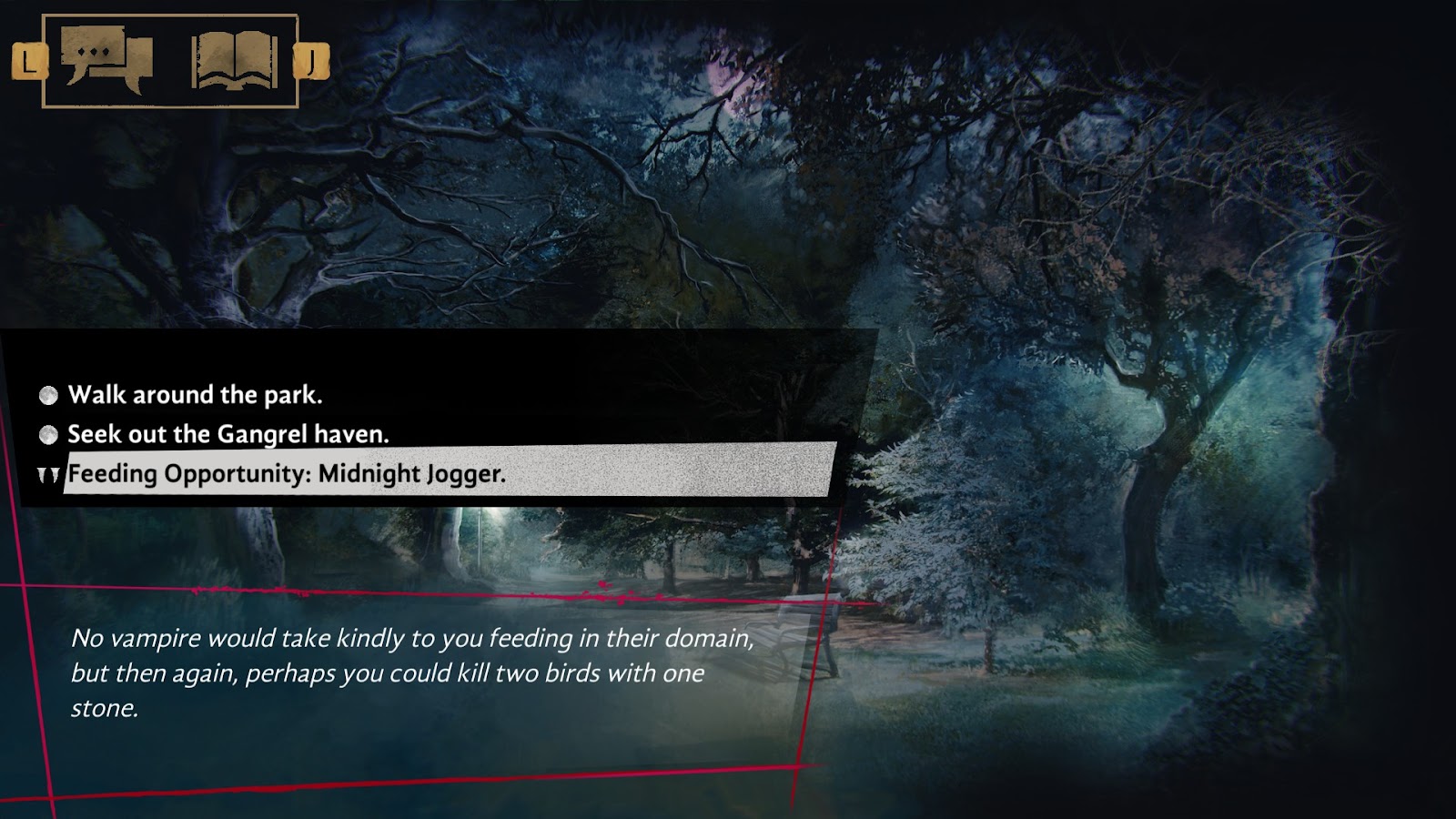 The main quest involves the Camarilla and their struggles with the vampiric rebels wanting to shift the balance of power and territory, the Anarchs. It’s a fairly forgettable story and lacks multiple endings to encourage additional playthroughs. The side quests show a lot more promise, and often involve recruiting vampires into your coterie.

Each recruitable vampire represents one of thirteen different clans and gives a clearer picture of vampire society than the exposition-laden main quest. You’ll have to replay the game at least twice to recruit every character but thankfully you can complete character side quests before moving onto the next. The Malkavian vampire, Hope, is a surprisingly fresh take on how a young vampire in the social media age might work around the Masquerade and reflects old myths clashing with new tech, like vampire elders smearing sigils on screens to keep up the Masquerade. 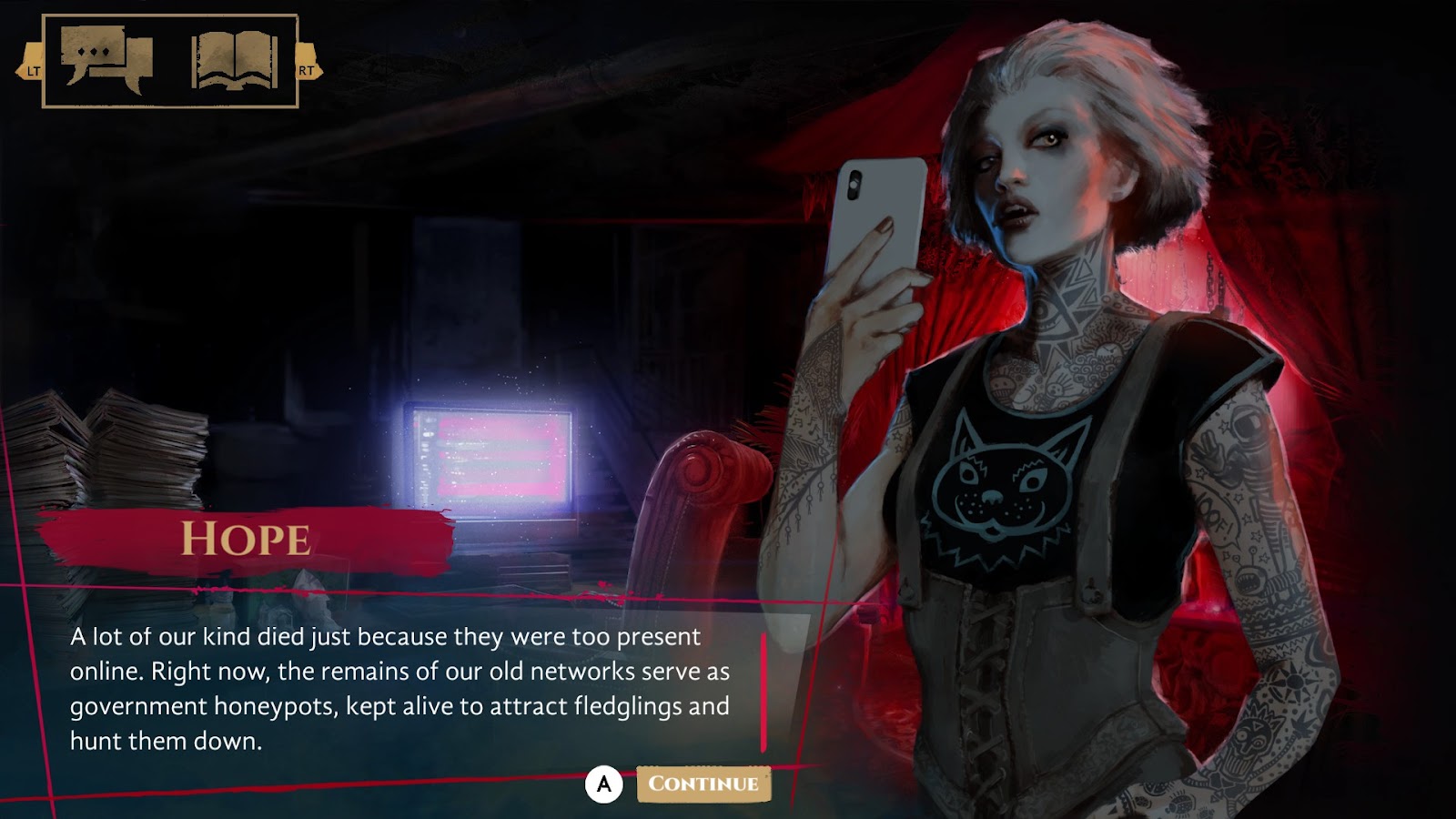 The strong characters and moody prose are appreciated but inconsistent. Coteries can be a slog due to some heavily expositional dialogue, which can be common in much longer visual novels but should have been reworked for such a short game. About half of the game amounts to information dumps filling up your dictionary with lore terms and figures, and when the action does progress it’s at a disorienting speed.

The grittier night scenes of New York City art are gorgeous and smoothly animated but reused in too many areas. Often characters will move through three or four locations with the same background in place, adding to the confusing sense of place. The thudding and foreboding soundtrack encroaches in on you and hazy, shadow-ridden streets feel rife with supernatural air. Gameplay and narrative aside, the theme of a densely populated yet inherently wild territory is captured well by the art and soundscapes. 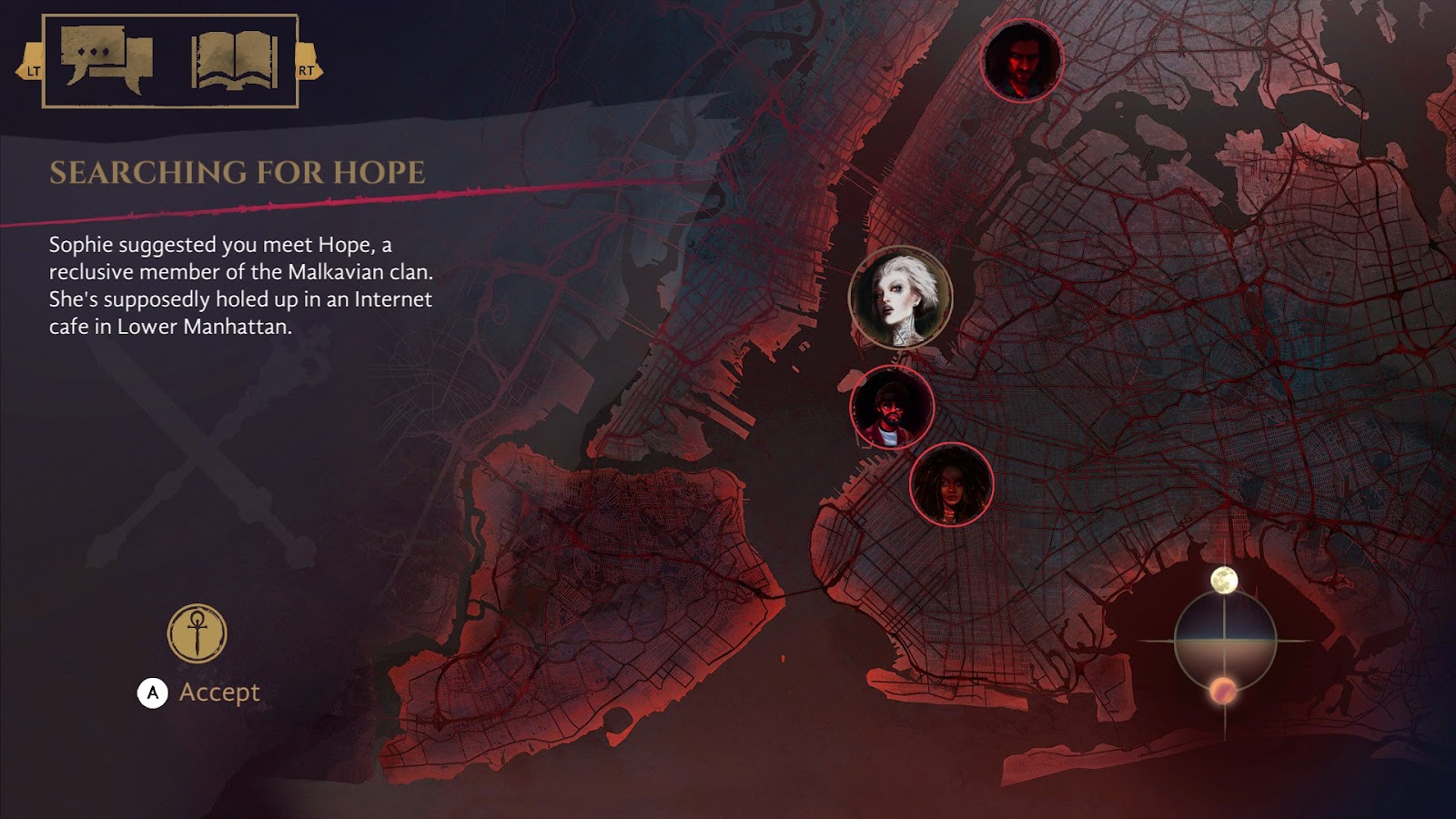 Other quality-of-life features present in many visual novels are sorely missed here, like automatic text progression, a skip dialogue button for second playthroughs, or even the ability to save. Coteries opts for a save and exit system which can leave a sour taste in your mouth after suffering your final death, only having to then go through large chunks of the game without a skip function.

The review build I played was also fairly buggy. Character sprites appeared in scenes they weren’t supposed to be in, minor character sprites changed halfway through a conversation and some sentences had clearly missing strings of text. During the climax of a Coterie recruitment scene, I selected a dialogue option and was returned to the map selection screen with zero context for what happened, and no conclusion for that character arc. 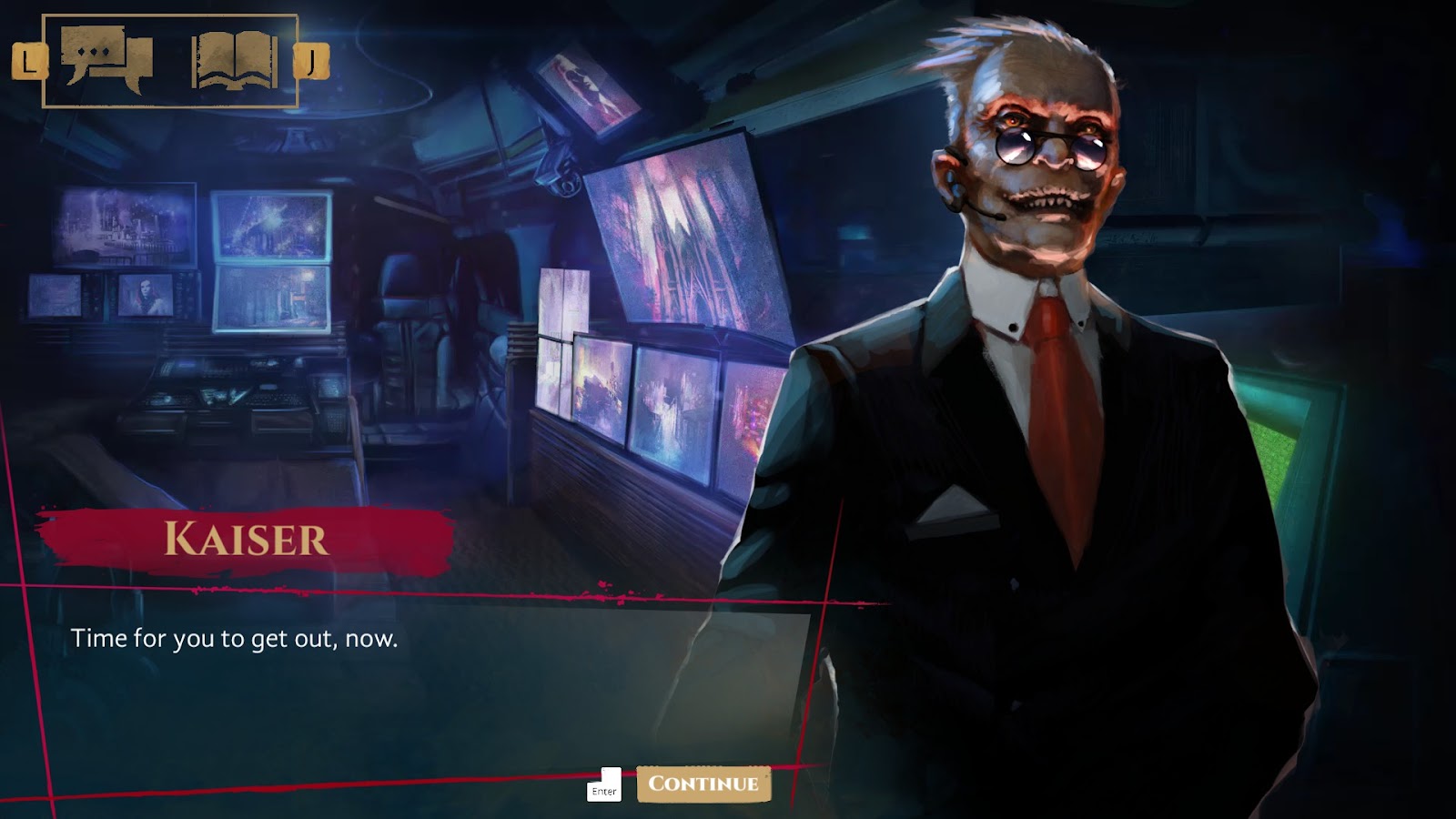 Coteries of New York does offer a glimpse into intriguing lore, and I can envision it as a companion to the Bloodlines 2 release for new players if it adds some much-needed basic features seen in most visual novels. It introduces the ideas, societies and cultures of World of Darkness adequately but its short length might leave fledglings and die-hard fans hungry for blood.