The 100 Best Indie Games of All Time

We run through our list of the very best that indie games have to offer.

Arrowhead Game Studios created a delightful bastard with Helldivers. A game which quickly sends you forth into the harsh world of alien killing. For those who have yet helped in the cause to spread democracy to other planets, Helldivers is essentially what happens if you mix Destiny and Magicka – it’s brilliant fun.

With a setting that constantly pokes fun at itself, missions which rely upon skill (but more importantly teamwork), and situations which cause more stress than being asked to open a jam jar by someone you want to impress, it’s a gem of a game for anyone who wants an excuse for punching their friend after they ‘accidentally’ shotgunned you dead.

It’s an incredibly difficult game to master and could be deal breaker for some, for others who want a great co-operative game with their friends and an excuse to get angry, should look no further.

Unravel was a ridiculously huggable game. The game had a lovably cosy presentation, and the puzzle design being based around Yarny’s movements slowly being limited by his unspooling thread was an adorable stroke of genius: interacting with the world by using your twine to push and pull discarded cans of soda, build bridges with twigs and swing about from tire-swings was a delight all the way through little Yarny’s adventure. Even if Unravel didn’t particularly innovate in the overpopulated puzzle-platformer genre, its light-yet-engaging puzzle solving and warm atmosphere helped it stand out from the crowd and earn a place on this list – and in our hearts. Aww.

No Man’s Sky was quite possibly one of the most controversial indie games of all time. It mesmerised audiences with its 2015 E3 demo and captured people’s imagination with the idea of exploring an infinite universe. Billed as the ultimate space-themed sandbox, the hype for Sean Murray’s ambitious game reached never before seen heights for an indie, with Sony pushing the game as one of their premier exclusives on the console.

Unfortunately, what was set to be one of the year’s most exciting games disappointed on release struggling to live up to the hype with many of the previously touted features failing to make it into the final release. Hello Games founder & spokesperson, Sean Murray became the target for most of the audience’s dissatisfaction after going on record confirming features that were simply not in the game, such as his infamous comments on No Man’s Sky multiplayer.

So, why is it on the list? Because despite the controversy and disappointment No Man’s Sky garnered, it was still an amazing achievement for such a small team. Better still, the team over at Hello Games have tried their absolute damnedest to improve the game since its release and after several updates it’s now at a place that easily secures it a spot on this list as one of the better spacefaring sandboxes available. 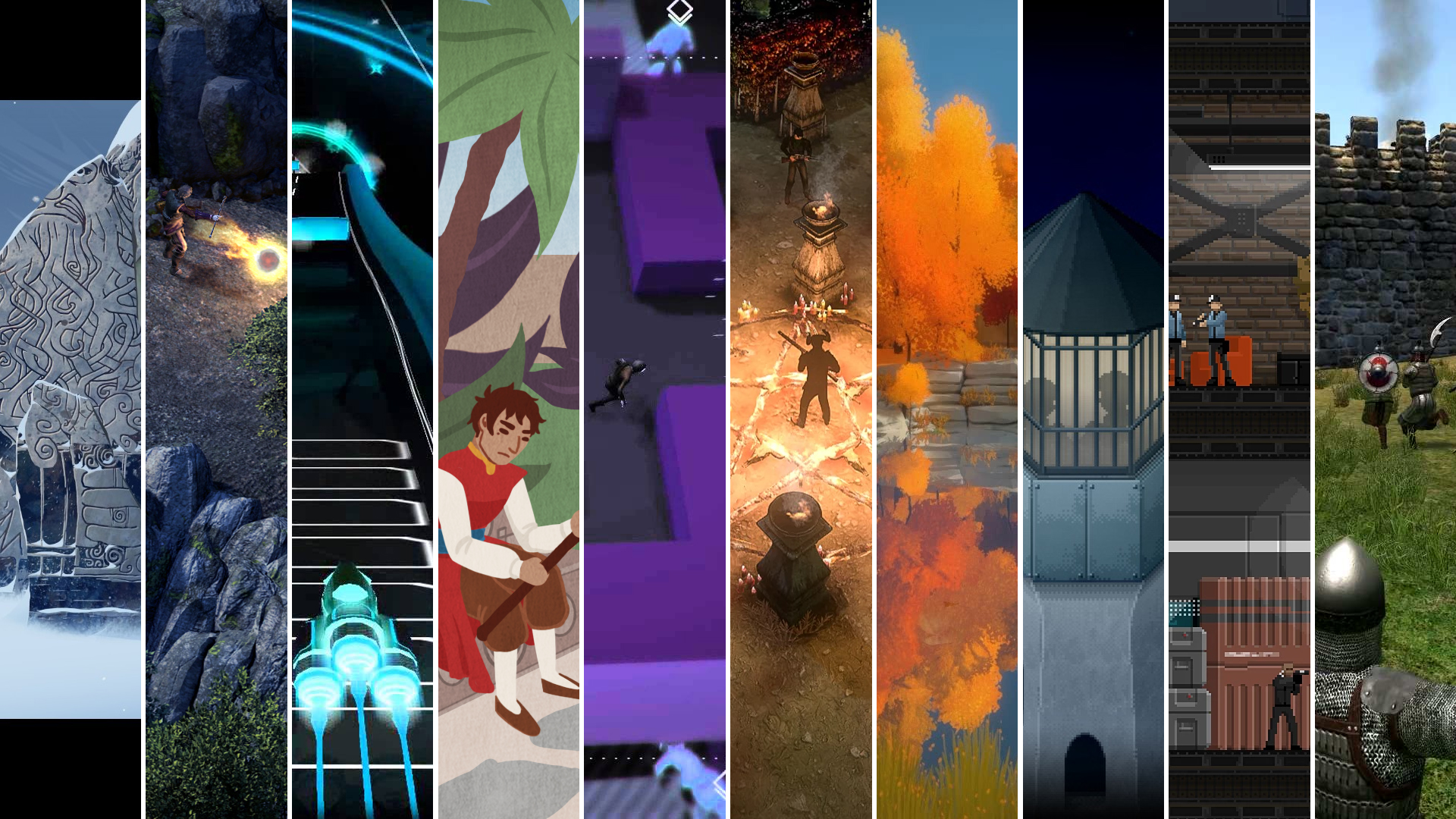 Disguised in this tactical role-playing outer layer lies an amazingly well written script that mixes norse mythology with fantasy elements to result in a very captivating experience. Gorgeous hand drawn graphics and landscapes envelop this classic RPG formula accompanied by a story about family and the union of different races to fight a dreadful enemy that threatens all life.

This was the first installment by Stoic Studio to a series that would continue with The Banner Saga 2, which reflected the overwhelmingly positive reaction from the community and satisfied its hunger for more.

RPG fans, norse culture enthusiasts, art lovers and good story seekers alike should give The Banner Saga a try if they haven’t already.

The definition of an RPG has expanded considerably over the years. Pillars of Eternity, on the other hand, took roleplaying right back to its classic roots.

Progress through its rich story and lore was slow and methodical, as was the combat in which you’d spend much of the time paused, planning your next move. Pillars of Eternity wasn’t shy of complex stats and roleplaying systems, either – there was a real smorgasbord of attributes to juggle.

The player’s patience was rewarded tenfold, however. Its deep, slow burn approach was not only relaxing; the compelling writing and plentiful choices made it a fantasy world that was easy to lose yourself in. An experience system based on exploring and completing quests in whichever way the player saw fit – rather than from combat – eliminated grind and provided real freedom.

Despite being around for the music game boom, Audiosurf differed from the pack in two key ways: it didn’t require any cheapo plastic instruments and the music you played along to was all your own. Players simply imported an MP3 (remember those?) and Audiosurf would work its magic. The result was an undulating racetrack of note blocks which corresponded impressively well to the song of choice. A quiet verse would translate into a steady, peaceful climb; a face-melting guitar solo would be a frenzied downhill descent.

It may have been a music game, but the crux of Audiosurf was essentially a match-three puzzler. A range of modes mixed it up, including Eraser, in which you could delete unwanted blocks; and Ninja, a stripped-down monochrome mode.

What made Audiosurf so addictive was the online leaderboards. A different leaderboard for every song meant that ranking was within reach on lesser-known tracks – and you’d receive a notification as soon as you were dethroned.

This first title from Finnish game developers Lizard Hazard Games shows a lot of potential for this small company. Your Royal Gayness, is a kingdom management simulator meets visual novel, following the story of Prince Amir. Amir is put in charge of his kingdom for sixty days whilst his parents are away. During this time, not only does he now have the chance to introduce new laws and improve the lives of his people, but maintain his kingdoms army, treasury and loyalty.

Alongside this, Amir must hide his sexuality from prejudiced citizens and can pursue relationships with neighbouring princes.

This game shows a lot of promise for Lizard Hazard, as they have released several patches for Your Royal Gayness, improving it with feedback from fans and reviews. It comes with many interesting characters, producing some incredibly bizarre yet fun experiences for the player.

Volume was a great experience for any Metal Gear fan, especially for those who enjoyed Portable Ops, Peace Walker or even the VR Training from PS1’s revolutionary Metal Gear Solid. Mike Bithell’s Volume is a great pure-stealth game with almost no room for improvisation and a narrative that engages in a critique of present day’s digital society of full exposure.

Volume also provides an awesome soundtrack and spot-on isometric visuals that highlight every piece of the environment and the threats of enemies in an informative, yet still defiant way. Lasers, hiding places, guards, traps and gadgets make this modern Robin Hood tale a worthwhile game for stealth, infiltration and puzzle lovers.

Those good old American supernatural Western folktales have a place in this turned-based tactical, narrative-driven game. Family tragedies, the gold rush, the unforgiving desert and the Devil himself have a role in Creative Forge’s Hard West.

Player’s choices have a great role in this title, as well as careful planning for its X-COM-like battles that will start with traditional elements and will slowly evolve to sci-fi, fantastic encounters with demons, undead and mythic beasts while uncovering a story about love, hate and revenge.

Jonathan Blow’s The Witness had high expectations to live up to as it followed eight years after Blow’s previous, juggernaut success, Braid. Most would argue it reached those expectations in its own, unique way. Set on an island which looks absolutely stunning, within an hour of playing The Witness a new lexicon develops in the back of the player’s mind.

The journey to understanding The Witness is magical. It takes players by the hand, walking them through myriad puzzles all designed around the simple concept of drawing lines on a grid and each, individual puzzle teaches the player something new or builds on a previous concept; all of it valuable information. After its release players started drawing the game’s puzzles and cuttinh them apart to figure them out. When the game transcends the screen, something amazing has happened.