From Tony Hawk to tiny hawks.

Long ago, in the distant past of the 2000’s, skateboarding games were aplenty. Every console and handheld had its own Tony Hawk game to scratch that itch. And with Tony Hawk’s success came competition like EA’s Skate and Ubisoft’s Shaun White Skateboarding. But times have changed. Tony Hawk has split ways with Activision and EA’s Skate series has remained dormant for years.

But there’s a new skateboarding Hawk in town. Literally. Glass Bottom Games aims to scratch that skating itch with their latest title SkateBIRD, an indie game that sees you take control of a tiny skateboarding bird as you ollie and grind your way through tiny bird-sized skate parks.

I got to speak with Glass Bottom Games founder Megan Fox about her studio’s upcoming (and adorable) game.

How did development on SkateBIRD first get started?

My partner showed me a GIF of an actual bird skateboarding, and a light bulb went off. It was this one.

What games did you take inspiration from while developing SkateBIRD?

Tony Hawk and Skate would be the obvious ones, but the Andy’s Room level in Disney Skate Adventure is the most direct inspiration. That’s where I got the idea for magazines and ramps and a ton of other things. It gave me this whole new perspective on what a tiny skate game could be. Also, it’s super fun. The Andy’s Room level, if not the best, is arguably one of the best Tony Hawk levels of all time.

Is there any kind of single-player campaign a la Tony Hawk Underground or something more akin to what we saw in the Pro Skater games?

More akin to the earlier Pro Skater games. A series of challenges and unlocks, do a certain percent of them, now you can go to the next level. There is a story being told in those missions, but it isn’t anything like the cutscene and vignette-heavy stuff that Underground and later games leaned into.

I notice in trailers Birds were wearing different hats. How much can you customize your bird?

Hats, glasses, neck items (ties and such), belts (hipsacks and cummerbunds and such), and foot items (spats and ankle warmers etc.) thus far. I think I can also fit backpacks in there. We’ve experimented with vests and torso clothing, but it bunches up in weird ways when birds do totally normal for birds movements, so you’ll probably only see that used by NPCs in the game who don’t bend themselves in half regularly. 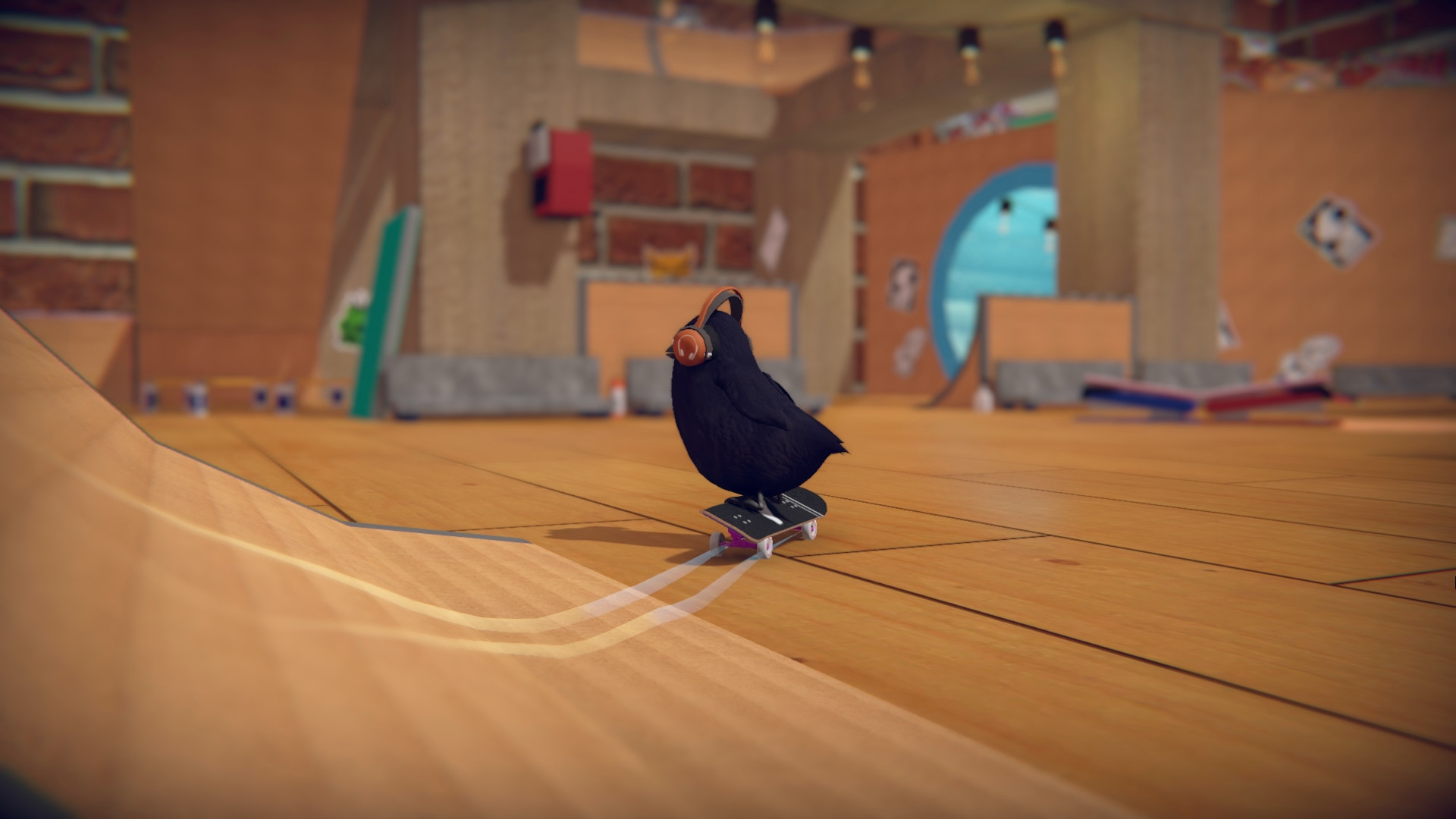 Another thing that caught my attention was the soundtrack. Most skateboard games tend to go for punk and metal, but SkateBIRD’s soundtrack is jazzy and lo-fi. What made you want to take the music in this direction?

When people talk about a skate game needing punk, they seldom mean good underground punk, they mean Goldfinger. If they point to hip-hop, they don’t mean SoundCloud rap, they mean If You Must. We needed to go out in our own direction, and get out of underneath that shadow.

More to the point, though, is that the music of today’s skaters isn’t the stereotypical Tony Hawk stuff. Kids putting together skate videos don’t use that, they use low-fi, synthwave, SoundCloud rap, all kinds of things. Here’s one from 2011, and here’s another from 2018, and here’s Lazer Crawford in 2019. It’s possible all the tracks are being chosen by adults, but I kinda doubt it’s that consistent? I feel like adults would be slamming in the THPS music, not the new stuff.

Have there been any notable & unexpected challenges while developing SkateBIRD?

Figuring out how birds work was extremely weird. Alex Price went through two or three distinct revisions of the birb, trying to figure out what birb shape could both skate and also still look like a birb. What we ended up with is something that is canonically a parrotlet with their flight feathers trimmed nice and tidy. Realistically, that’s exactly what would happen if a bird tried to skateboard this hardcore, since they’d be constantly breaking their tail feathers and their Big Friend would have to trim off the broken ones every day.

Can you play as a (Tony) Hawk?

There is a tiny hawk in the game, and you can create-a-birb a tiny hawk.

The game features bird-sized skate parks made up of everyday house items and office supplies, but what’s your favorite bird-sized thing to skate off of?

Magazines. They make perfect quarter pipes and verts, but unlike most other materials, they look cool and detailed up close even at birb scale. It makes them dynamic, interesting shapes to skate, especially when you give them a cool straw coping at the top.

Can you tell us how many skate parks are planned for the game?

At present? Bedroom, Rooftop, Office, Stairwell, and Skate Heaven. That could change by launch, though. 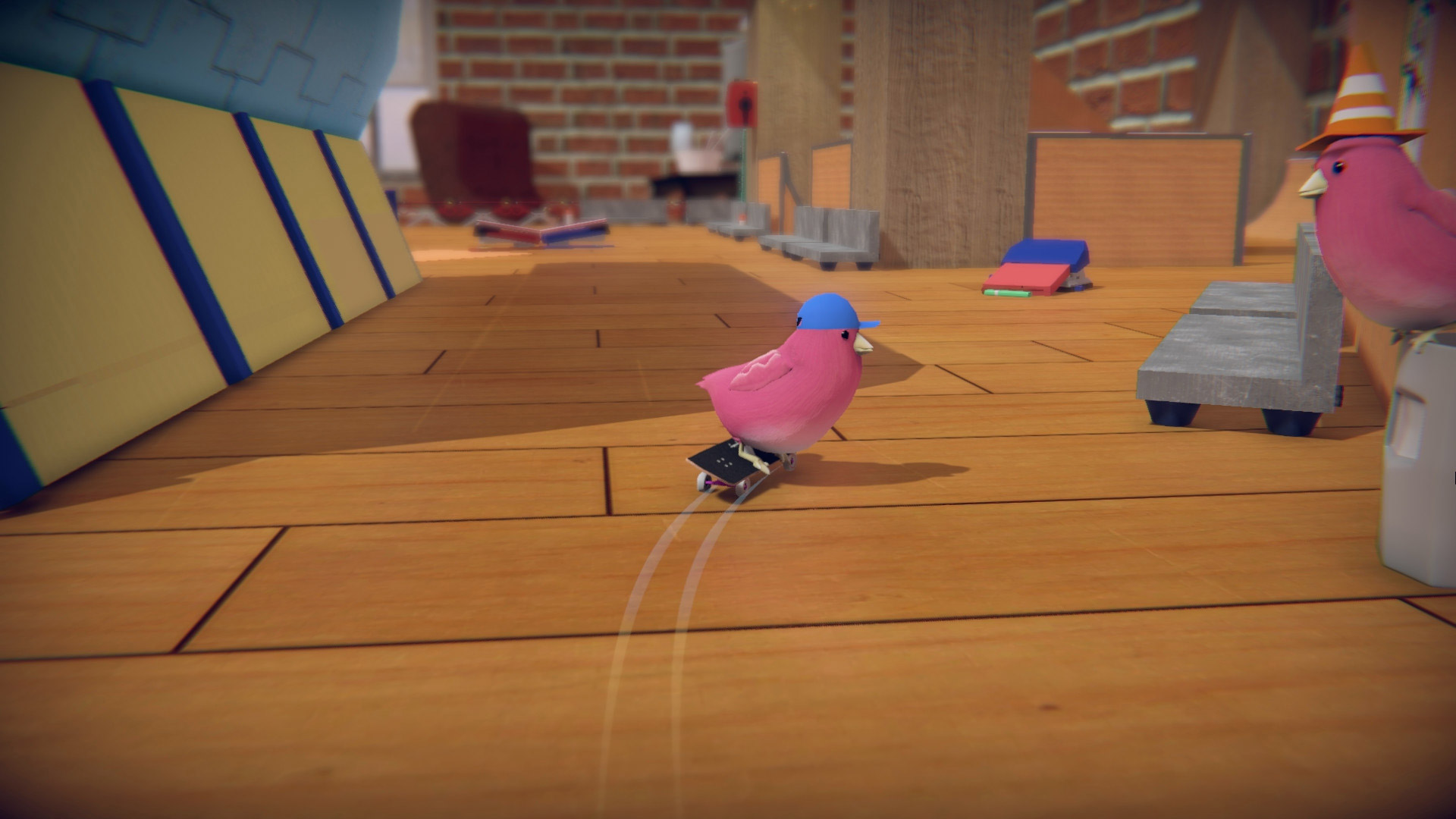 I know the game is still in development but with the rise of indie games getting limited or exclusive physical editions, do you think we might see a physical version of SkateBIRD in the future?

We’re certainly not ruling it out 😉

Does anyone at Glass Bottom Games skate and/or own a bird?

Sort of. I’m a birder, and I live in the country, and I go through a significant number of bags of seed and suet blocks a month, and when planning how to cut back trees and the like my first thought is usually “will this impact my birds’ access to seeds/fruits/cover etc?”. My birds just happen to live outside of our property, heh.

Lastly, is there anything you would like to say to the readers?

Please feed your outdoor birds. As climate change continues, we’re likely to see the precipitous drop in flying insect mass continue (Google for news on that), and not all birds can survive on fruit. Try to put out suet as well as seed if you can, especially in the winter. Also, trans rights are human rights.

Contributor Brian is a lover of games (especially fighters) since the first Pokemon dropped. Always eager to check out the latest event in the FGC, you can catch him on his personal blog quartercircles.com.