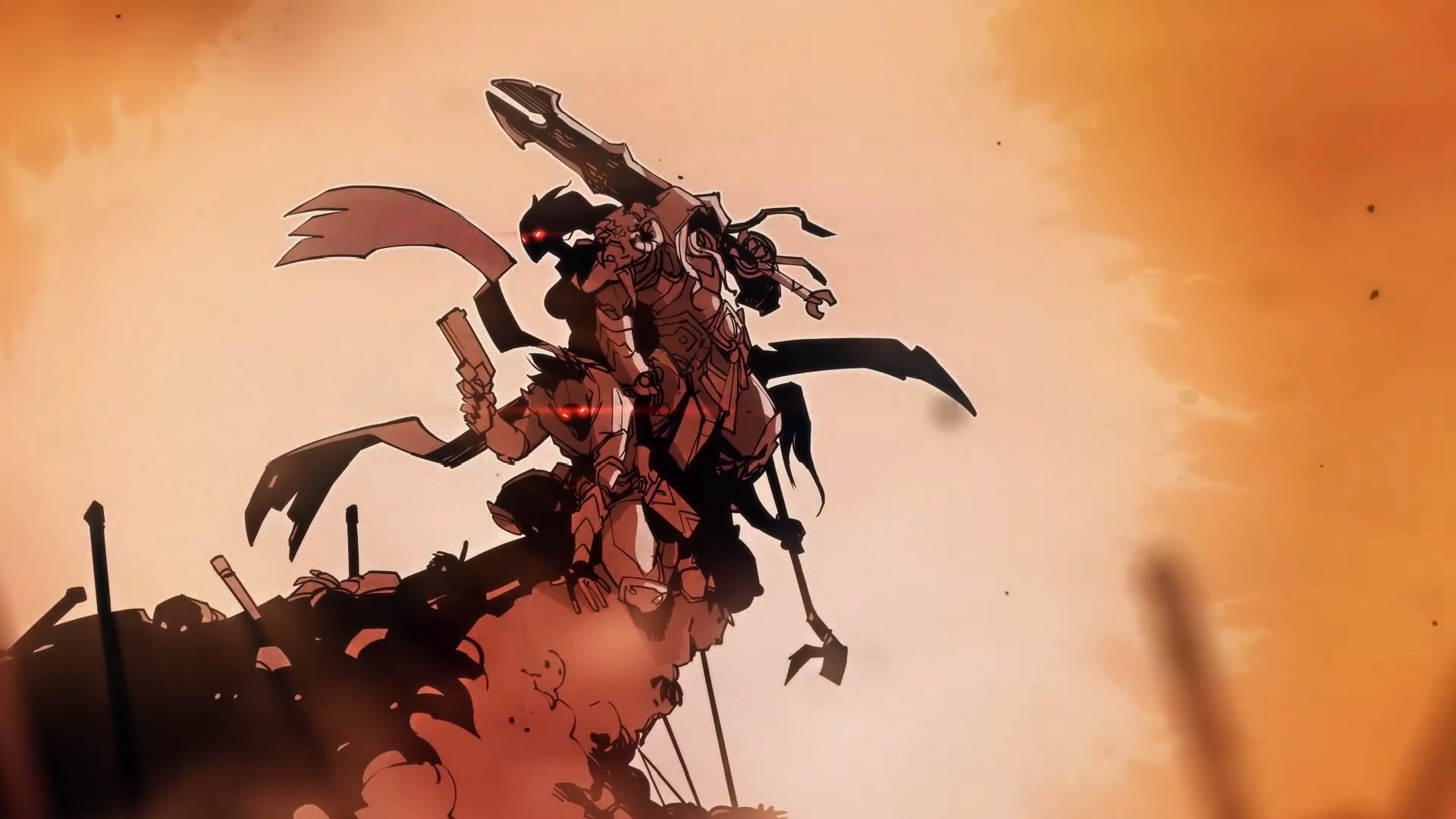 A series pivoting to an entirely new genre can raise some not entirely unwarranted scepticism. For Darksiders, a trilogy of open-world action-adventure games, to switch to a comparatively linear, top-down action-RPG is quite a shift. But Darksiders Genesis still manages to keep its DNA reasonably intact in the transition. Following its original PC launch, it now arrives on consoles in a competent port.

Genesis takes place before the events of the previous Darksiders’. You play as Strife and War, two of the four Horsemen, working for the omnipotent Council. You’ve been tasked with looking into what Lucifer’s been up to – which, to nobody’s surprise, is no good. It’s a largely forgettable story, the gist of which is that you’re compelled to lark around different areas of Hell killing baddies and restoring the balance. At the very least, the banter between class clown Strife and righteous jobsworth War is entertaining throughout. 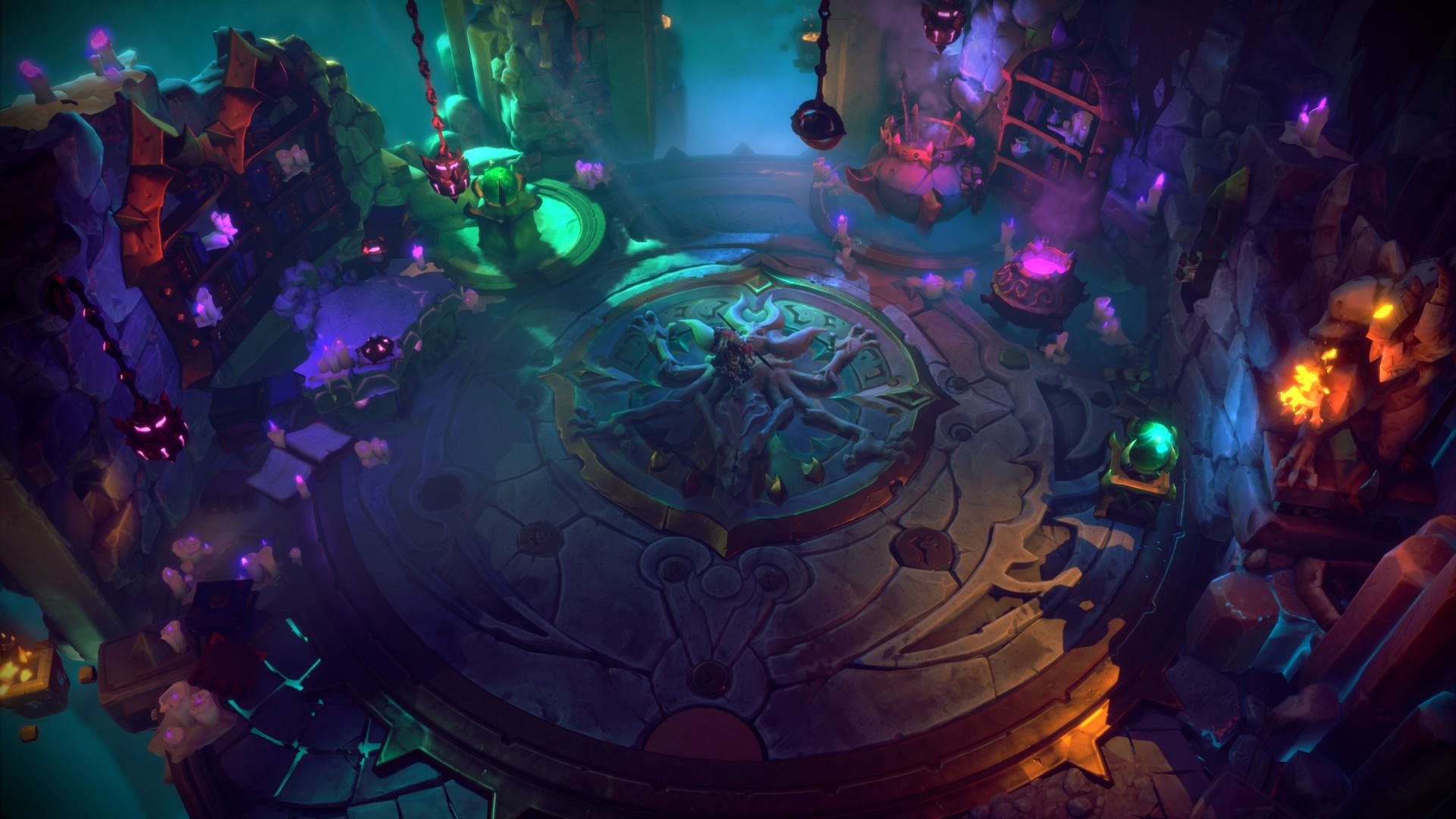 Genesis is split into stages with a hub world to return to in-between to buy upgrades. Levels are fairly linear romps through waves of demonic enemies, with a handful of side paths to explore and find secrets within. A few light puzzles and platforming sections are thrown in the mix, along with level objectives that reward you with extra currency and items. You can either play single-player and swap between the two characters or pick one each in co-op. It’s a simple but effective – and mostly fun – setup.

A highlight of Genesis is the empowering variety of skills at your disposal. You can perform combo attacks, synergy attacks and lethal finishers; wield weapons with hot-swappable ammo types and specials; unlock numerous abilities; and gain items that can be used in combat as well as to solve puzzles. It feels surprisingly familiar to mainline Darksiders games, just in a totally different perspective.

So, uh, where does this go? 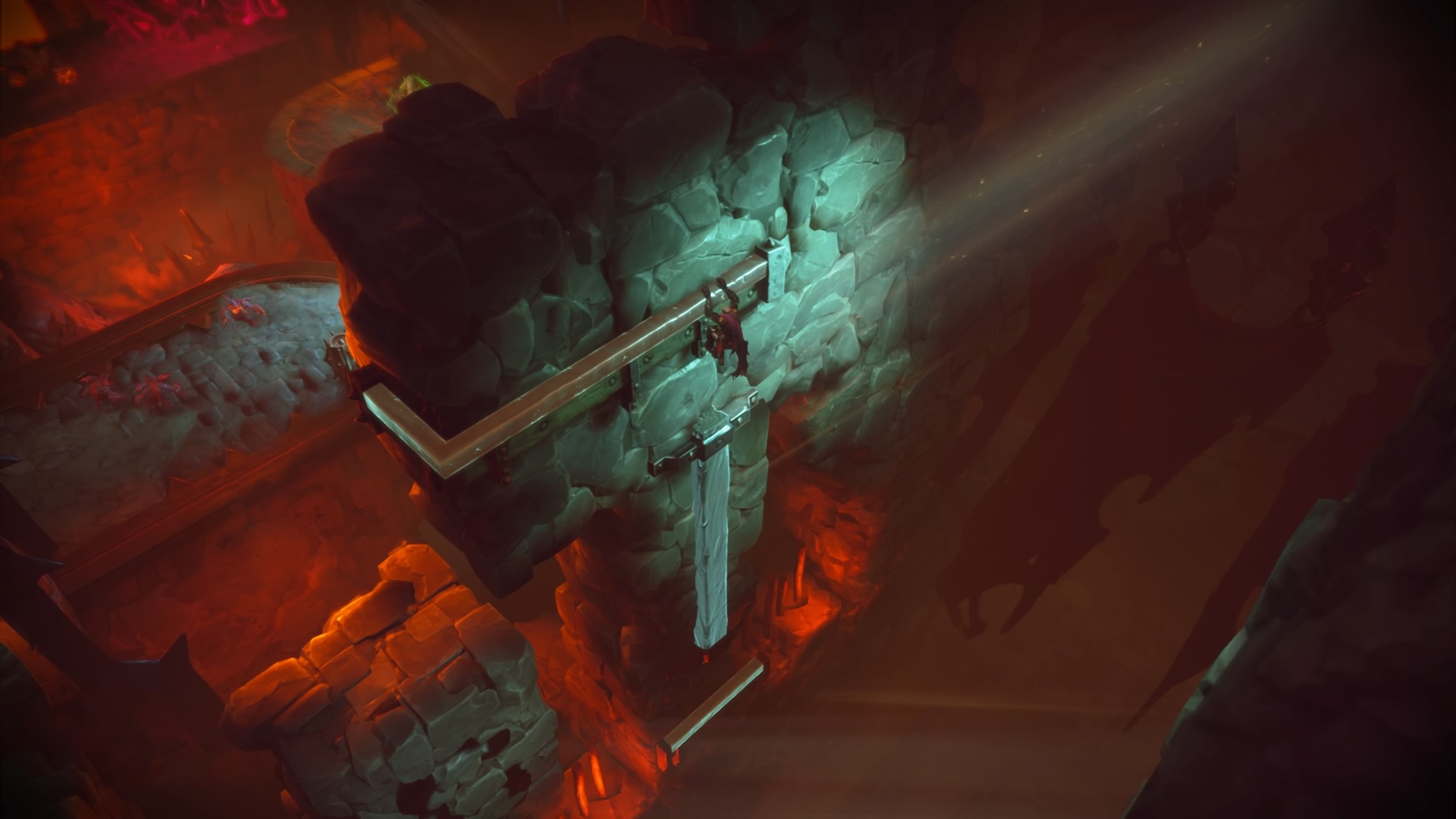 There’s so much at your fingertips, in fact, it’s easy to forget to use everything, especially when playing in single-player and having both characters to switch between. It stops Genesis being a repetitive hack-and-slasher, by virtue of the countless ways to hack and slash. And while Strife and War don’t level up, per se, Genesis features a system called Creature Cores to strengthen your characters. Functioning like a simplified version of Final Fantasy X’s sphere grid, you can use orbs dropped by enemies to fill a board and receive numerous stat boosts.

There’s surprisingly little information about some of these key mechanics, however. The Creature Cores section is mentioned but demands some trial and error to understand its intricacies, whereas other features are never even brought up. Synergy attacks, for example, are just something I found by chance within an NPC’s list of abilities for sale.

A little Darksiders, as a treat 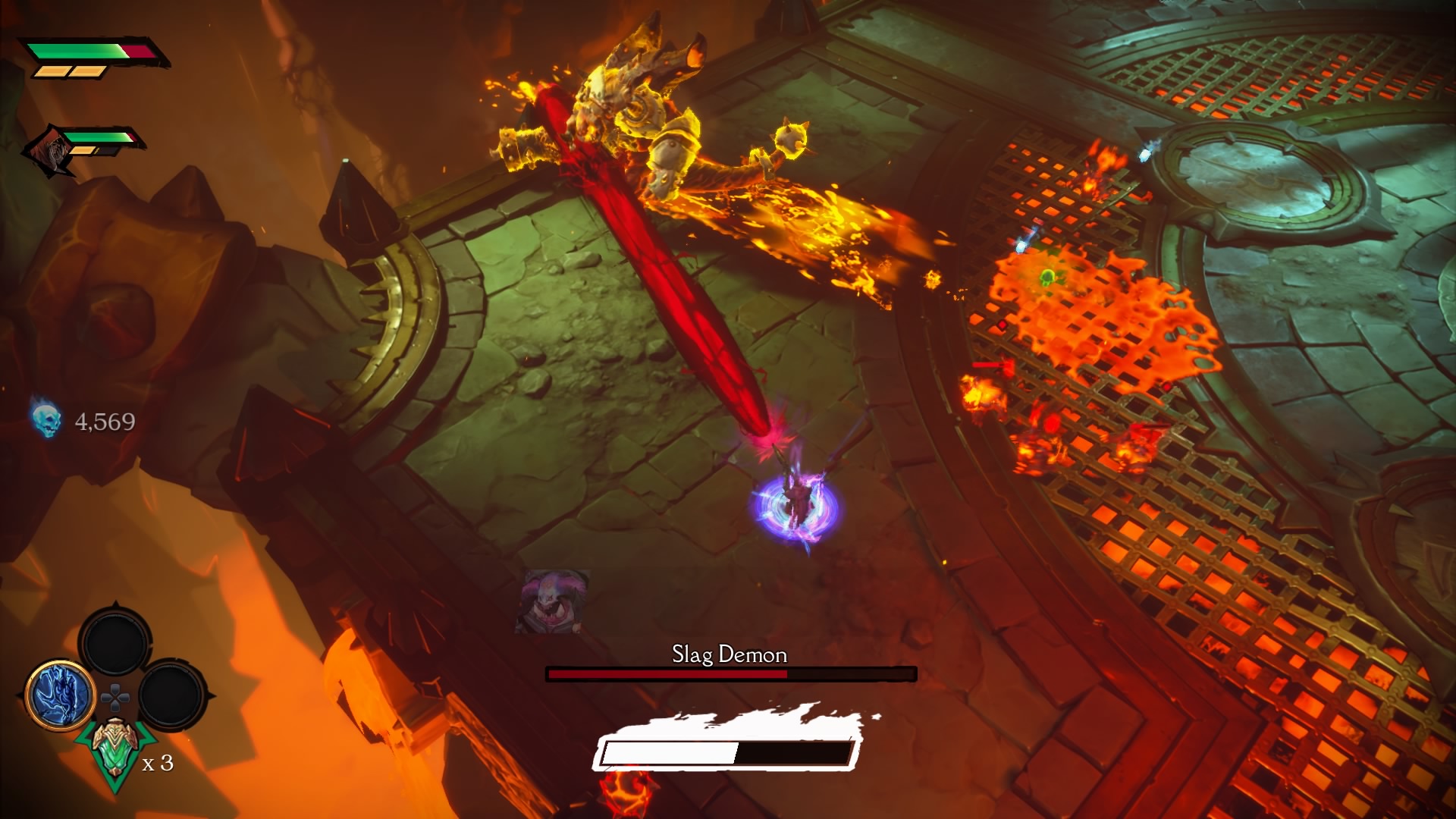 You could be forgiven for thinking Genesis is a full-size action-RPG, with endlessly replayable levels and collectable loot. Heck, it even looks like Diablo. But the justifications for this being any more than a one-shot campaign are pretty slim. You can grind out stronger creature cores, and levels feature a few areas closed off until you return later with new abilities. Stages can be replayed at higher difficulties, too, but I struggled to feel motivated to replay them more than once.

This isn’t an issue – Genesis is fun and meaty enough for a satisfying single playthrough, and the option is there for real completionists to pump a fair few more hours into it. On Normal difficulty, it’s actually fairly easy, but the next hardest difficulty is a bit of a step up unless you grind a little.

I can show you the world 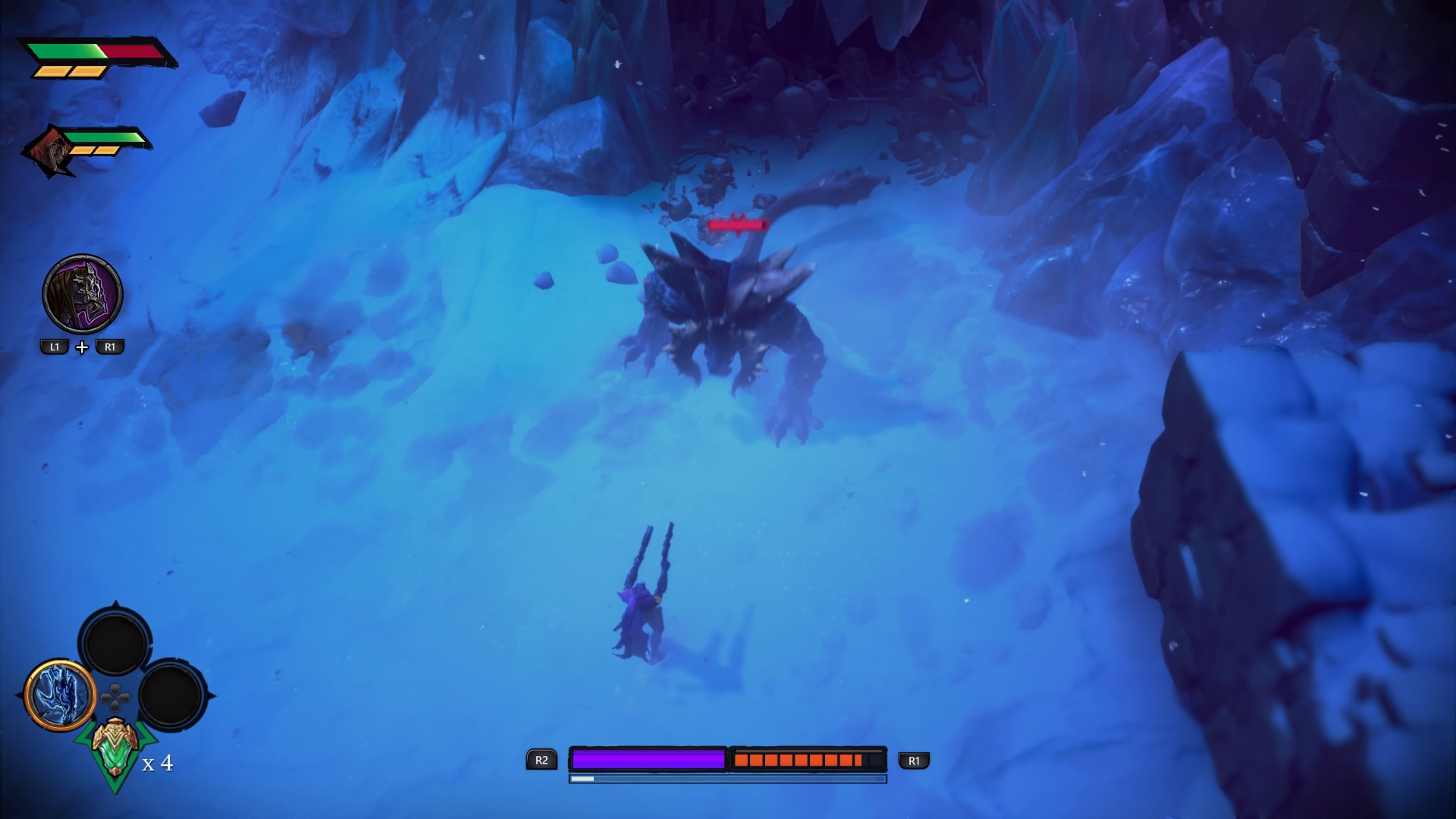 The move to consoles is a generally successful one for Genesis – at least on the PlayStation 4, which I played on. If anything, the controls are better suited to a gamepad, as a mixture of a hack-and-slash and twin-stick shooter. The framerate is maintained at a reasonably solid 30FPS, with just the odd stutter as it loads in assets.

It looks great, too. Bird’s eye views like this are always going to have to sacrifice some fidelity for performance as so much has to be rendered on-screen, but levels feel intricate and alive. After an uninspiringly brown first level, environments diversify from frozen tundras to hellish dungeons mired with lava and everything in-between. The Void is my favourite setting, a bluish-greenish dimension of platforms suspended over nothingness, sometimes building themselves piece by piece as you walk across.

Just a little to the left 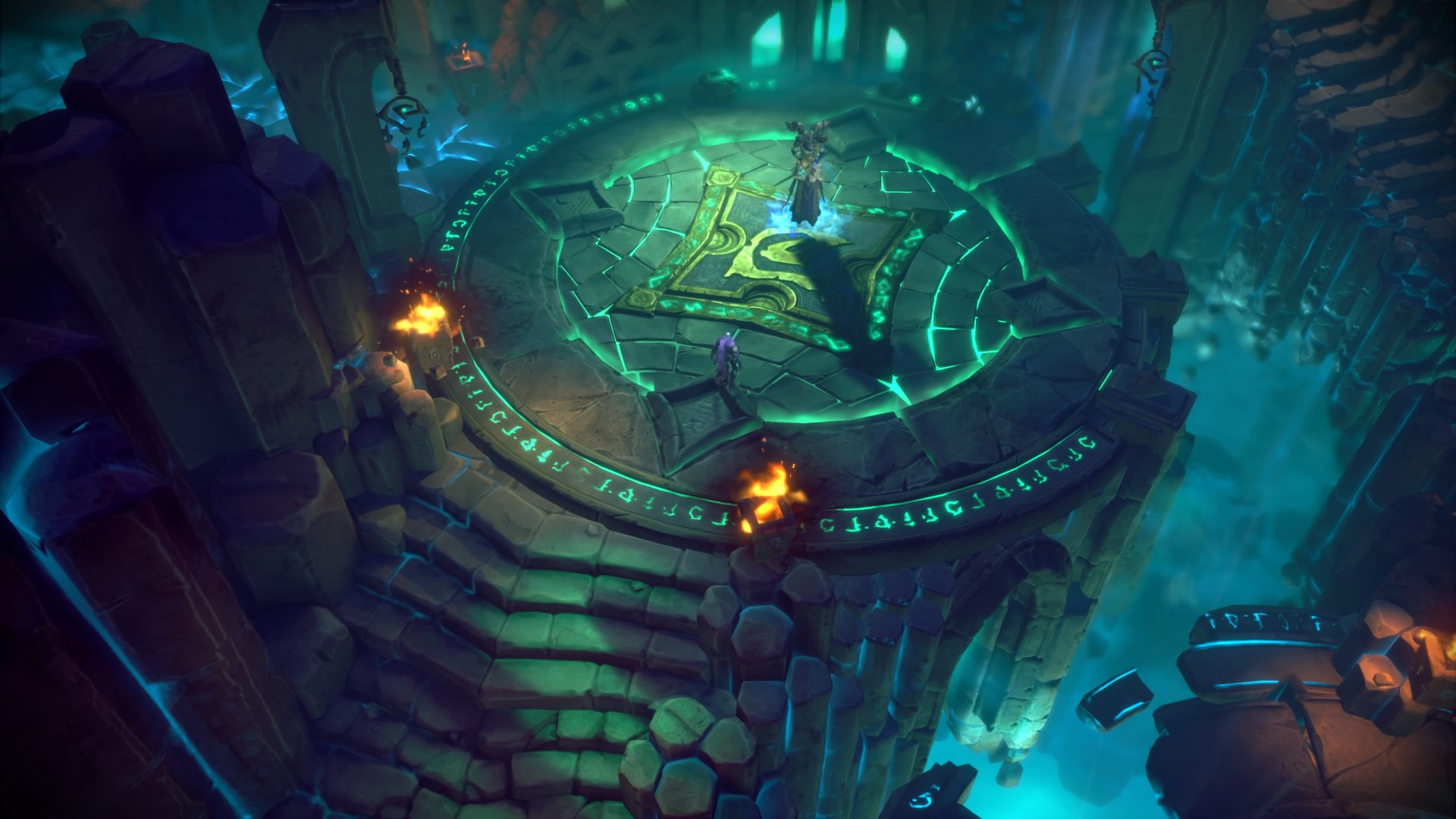 The camera is stubbornly fixed in place, which gives a cinematic feel and shows off the levels from their best angles – the problem being that these angles aren’t always the best to play them from. Sometimes you’ll be peering at your character from over a rock formation, or worst case, fighting as a cyan silhouette when they’re completely blocked from view.

In fact, Genesis has a consistent issue with actually being able to see what’s going on. The bird’s eye perspective is particularly zoomed-out at times, and there’s a lot to take in. I’ve always felt fortunate to have decent eyesight, but I was squinting at times to make sense of what was displayed on my TV. While the situation would no doubt be easier if the screen was right in front of your face, that’s unlikely to be the case for many playing this console port.

Visibility issues aside, Darksiders Genesis is a solid port of a solid action-RPG. It’s accessible for both Darksiders fans and those who’ve never played anything from the franchise before. While there’s nothing truly remarkable on offer here, Genesis nails all the fundamentals of satisfying demon-bashing.