Come into the fold. 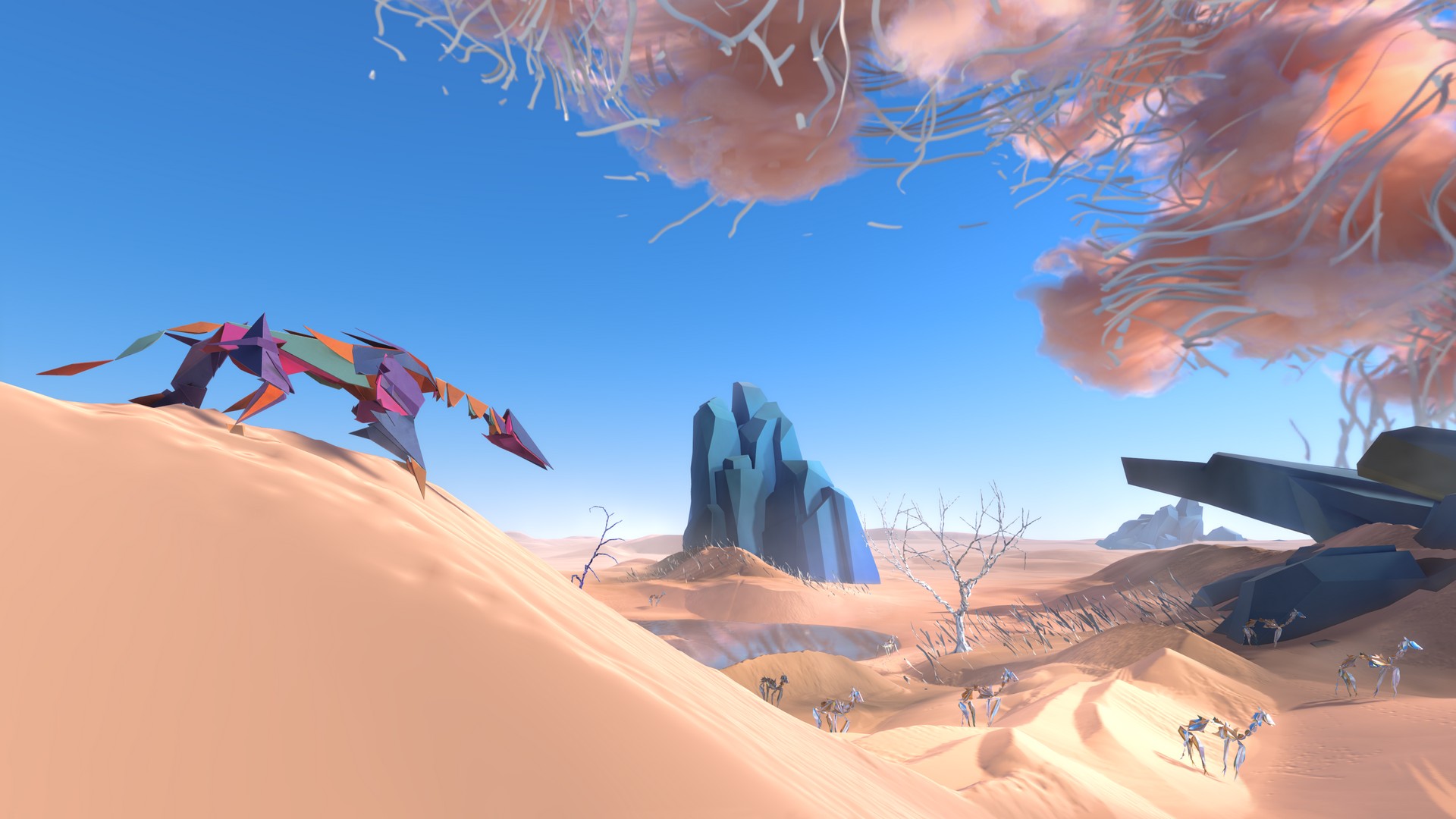 A strength of gaming has always been its ability to transport the player to new and fantastical worlds. The immersion afforded by VR can inevitably take this even further. Paper Beast is a shining example, its remarkably original setting letting you experience the weird and wonderful in equal measures.

Paper Beast’s intro sets the scene for your unusual adventure to come. You begin in a music visualiser of sorts, manipulating different components of a song – a good introduction to the game’s binaural sound. Then the facade slips away, and you’re left stranded in the middle of a desert, joined only by strange origami creatures for company.

Levels are split into sections, each requiring that you trigger an object or reach an endpoint. But despite first appearances, this is no walking simulator – there are distinct puzzles to overcome in order to progress. Terraforming is a key mechanic, with many puzzles requiring that you build up a piece of earth so that you can reach a high ledge, or carve out the ground to pass through a blockade or direct the water of a stream.

The puzzles were my least favourite part of Paper Beast at times. While some are straightforward, others are more obscure and frustrating. The mechanics of Paper Beast are quite slow and measured, so experimenting and trying new things can take some time.

It’s blowing a gale out there 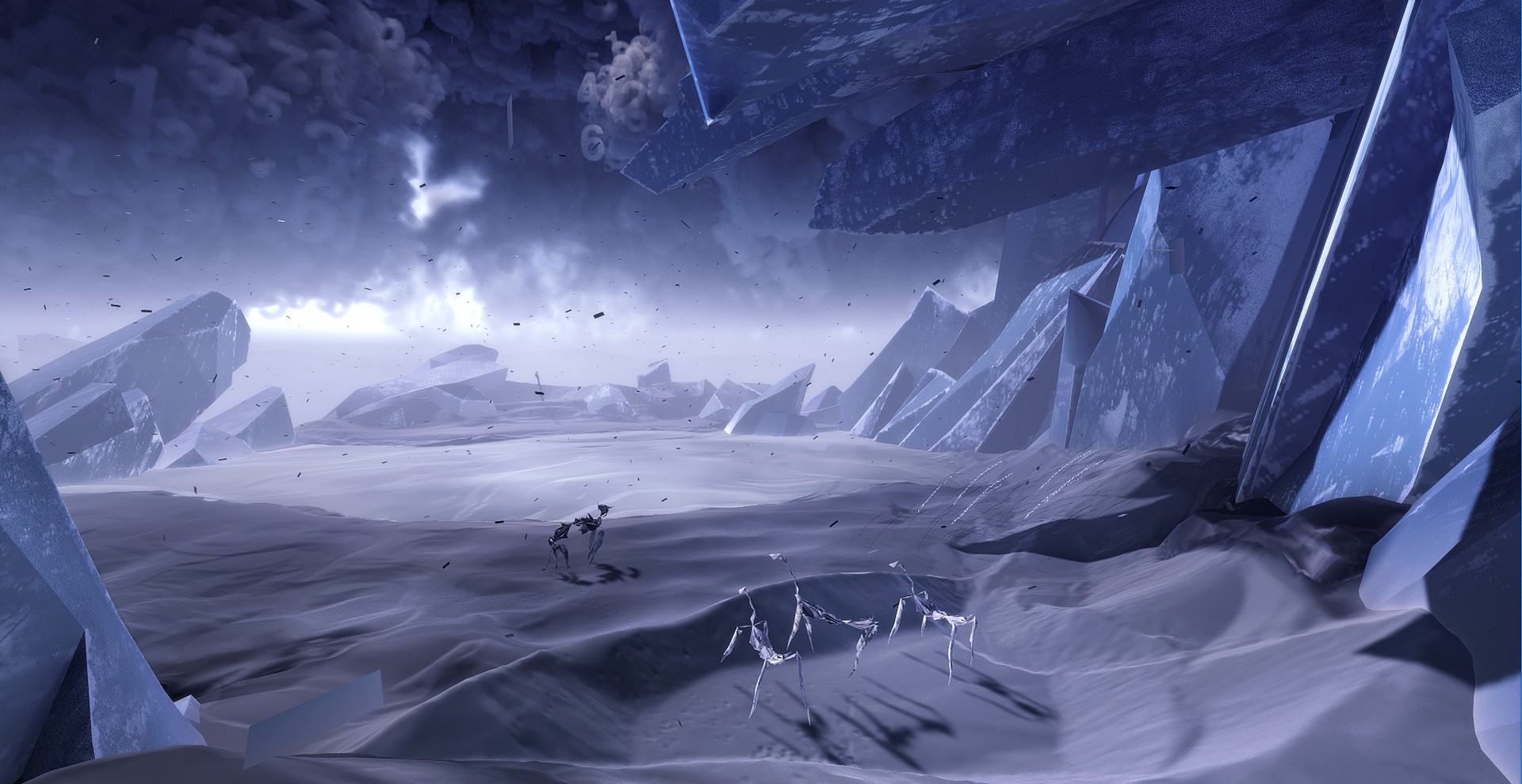 A particularly irritating puzzle, for example, involves moving a giant tape deck across an icy level. It’s a painstaking task, the wind blowing it in directions you don’t want it to go and tentacles reaching out and snaring it into place. It feels like a constant fight against the controls and linear restrictions of the level, including invisible walls that halt your progress.

Paper Beast also demands that you learn and adhere to its seemingly arbitrary rules and logic. Yes, you can manipulate this piece of earth but not that one. You can lift that creature up, but not this one. Clicking this weird purple polygon does something. You need to get the animals to the tree, because then that makes it grow and produce special fruit that float the animals to the sky, which then spawns a paper hot air balloon. Of course.

Do stickmen dream of paper beasts? 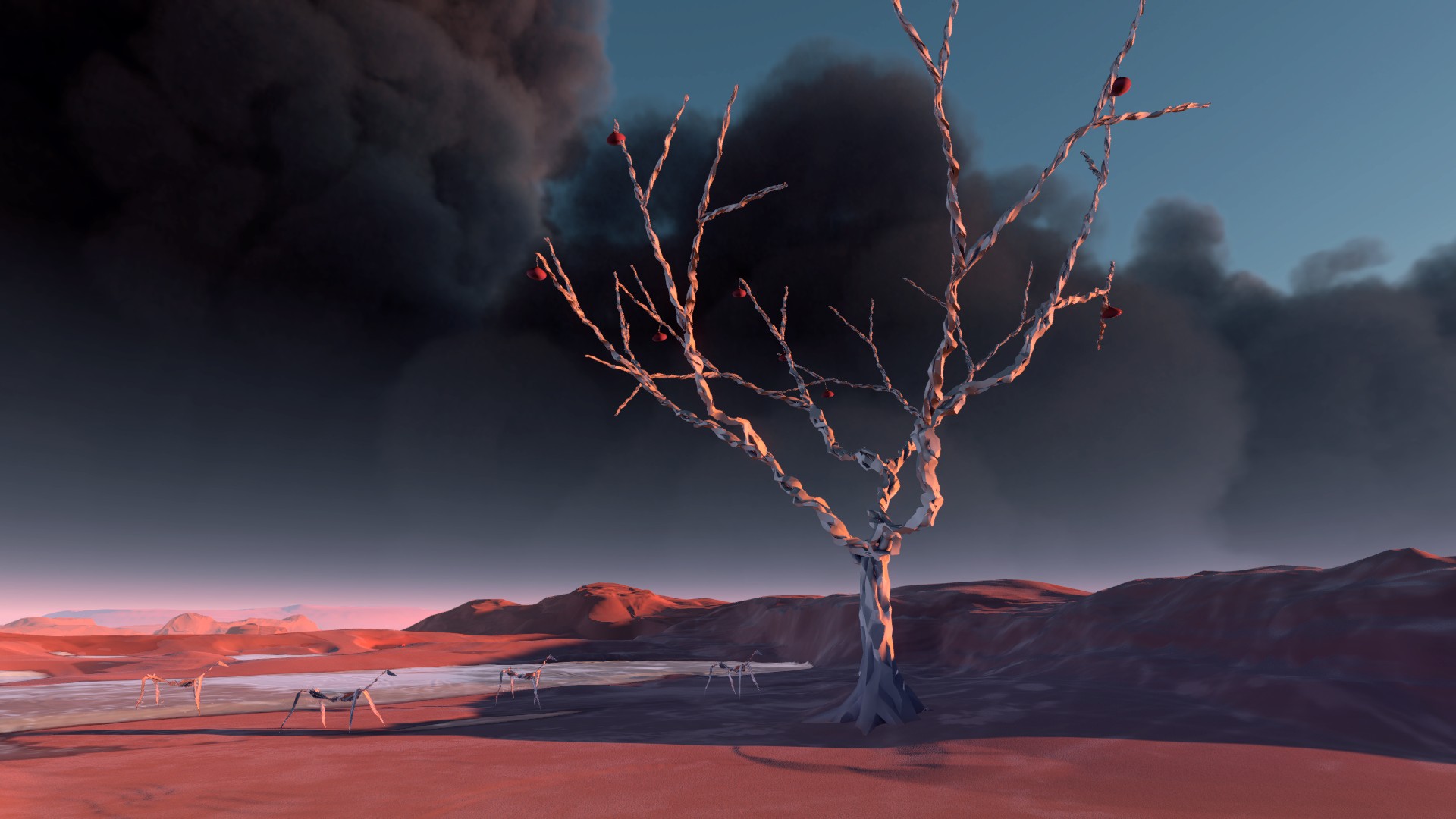 It’s a shame your progress can be stymied by weird mechanics and logic, because Paper Beast’s world is a fascinating and mystical one that begs to be explored. It’s at once natural and completely artificial. The landscapes can be beautiful, albeit alien, but then you’ll stumble across a glitch in the matrix – or become immersed in a downpour of data. Likewise, its fauna are like something off the Discovery Channel – grazing, protecting their young, hunting each other – to the point where it’s easy to forget they’re crafted from paper.

In this world, there’s a fascinating juxtaposition of what, on the surface, seems like it should be a relaxing and picturesque setting with the unsettling feeling that something isn’t quite right. This air of mystery and foreboding is one of Paper Beast’s most compelling elements. Another highlight is its dreamlike set pieces, such as the parades of its papercraft animals, or the times at which reality dissolves around you. 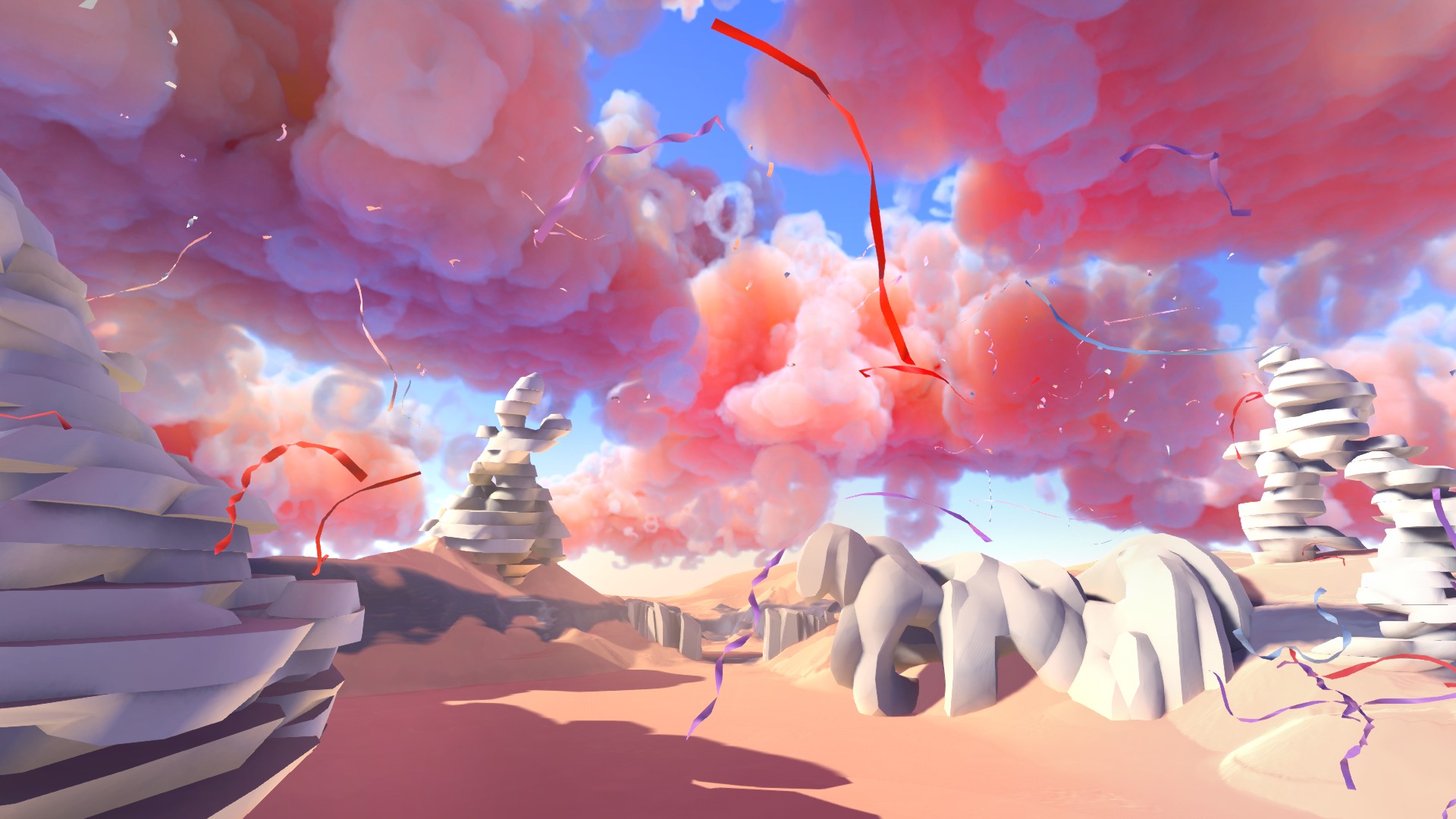 From a technical standpoint, it’s pretty low-res and with soupy textures, something that’s come to be expected from a VR game with large, open levels in order to reliably maintain the high framerate needed. But the unique level design and intricate creature animation help it make an impression in spite of this.

Speaking of VR constraints, there are a couple of important VR design decisions which – in my opinion, at least – Paper Beast gets right. Firstly, PS Move controllers aren’t required to play – you control everything with the buttons and motion controls of the DualShock 4. This works just fine, and lowers the barrier to entry from having to buy the pricey and sometimes elusive PS Move controllers. 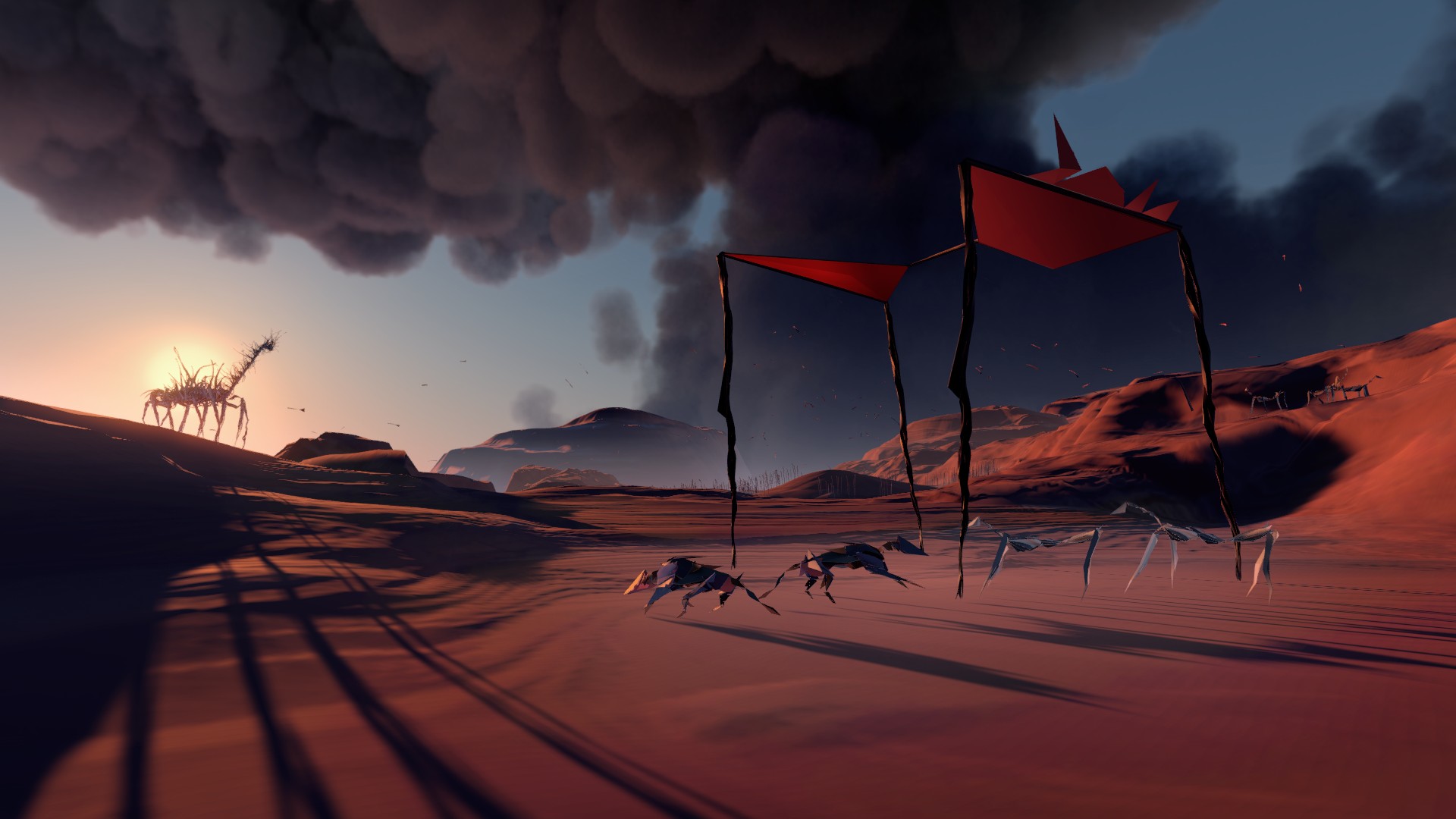 What’s even more of a relief is the use of teleportation movement rather than regular walking to get around. While perhaps less immersive, this doesn’t feel too out of place in Paper Beast’s already surreal world. More crucially, it’s much less likely to cause motion sickness.

Paper Beast is a memorable VR experience like no other, letting you play god in a world that feels godless. If only its puzzles – sometimes creative, but other times frustrating – didn’t get in its way, it would be an unconditional recommendation for lovers of bizarre escapism.