Cyberpunk courier services in the sky 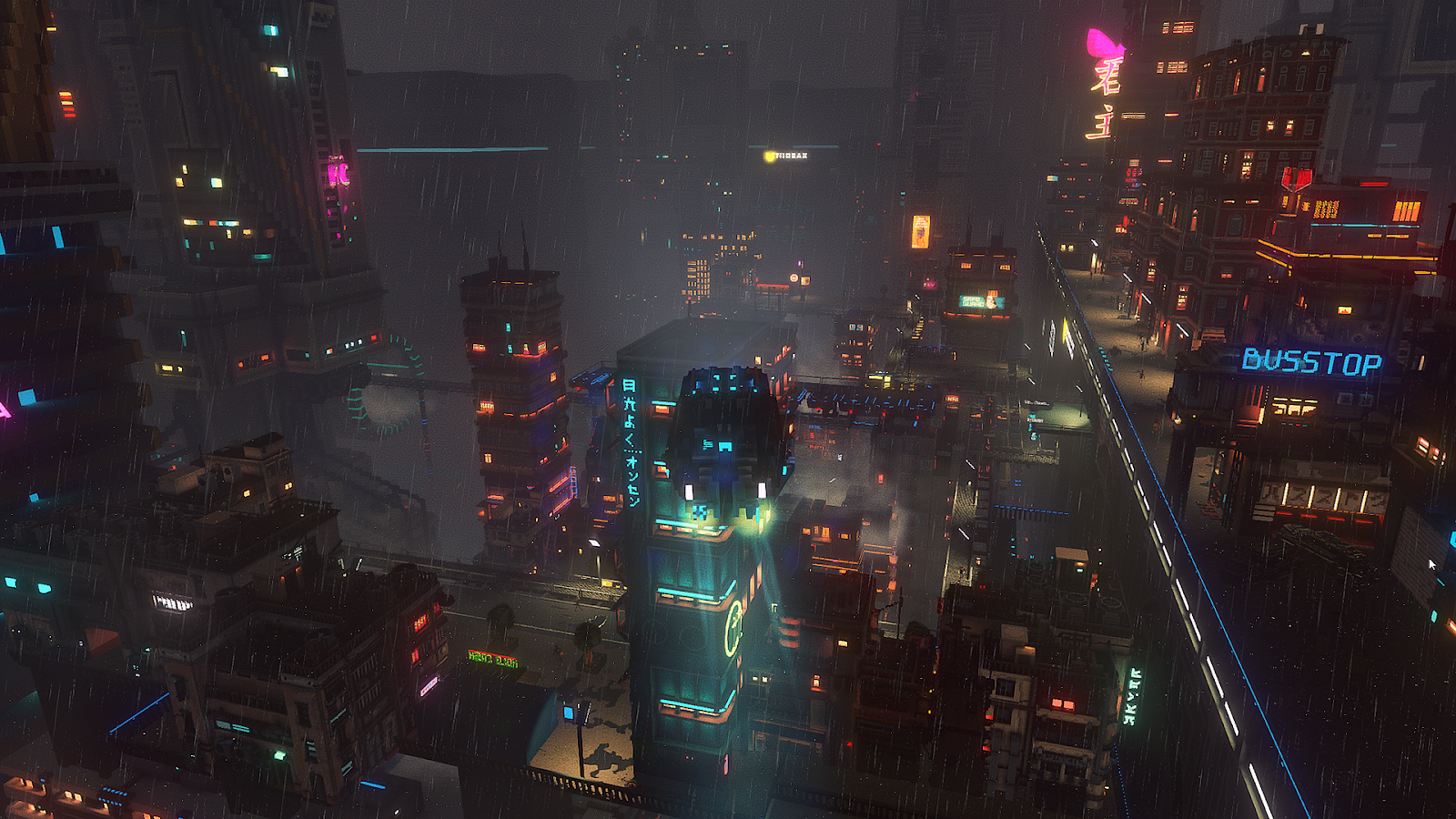 “Making it here is like trying to paint on the surface of a river. The current of people and ideas and the crowds; they wash everything away”.

Though Cloudpunk boasts an eclectic cast of characters – more on that later – the most work has clearly gone into developing the city itself. Cloudpunk wears its inspirations on its sleeve; there’s a hefty dose of Blade Runner and Fifth Element weaved through its design.

So too does it evoke Parasite in the literal high-low divide of its class structure, whilst Cloudpunk as an enterprise feels not too dissimilar from the pizza delivery services found in Snow Crash, an influence directly noted by the game’s developers.

In this respect, Nevalis isn’t reinventing the augmented wheel in terms of cyberpunk tropes. But what it does take from atypical cyberpunk narratives, in regards to concepts like android rights, totalitarian police states and neon-soaked vistas, it manipulates well. In the best cases, there’s a twist on the trope that freshens these concepts, like the surprise identity reveal of your HOVA’s (hover car’s) A.I., Camus.

A Matter of Perspective 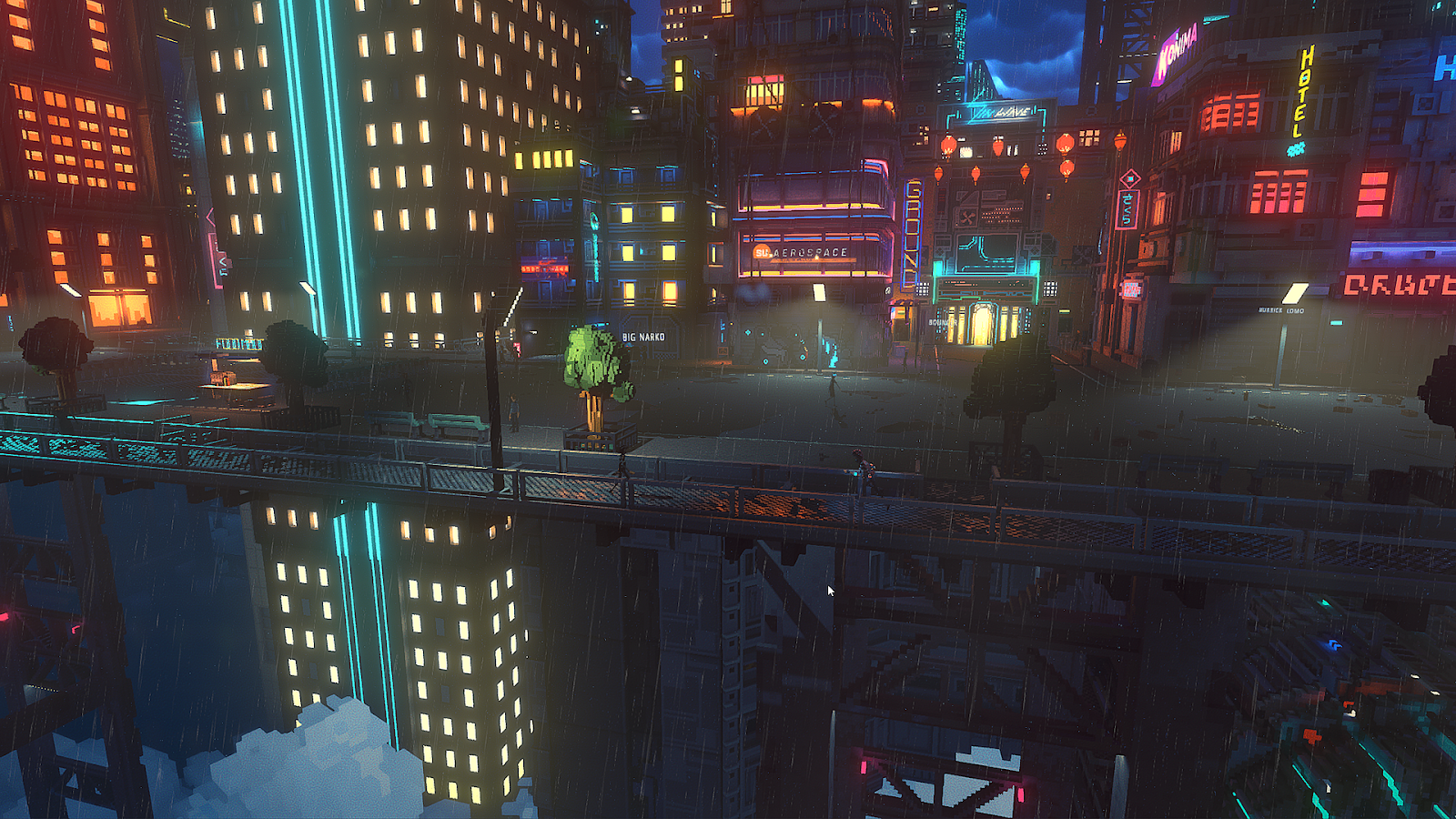 The art style and voxel graphics work well to complement the sizable scope of Nivalis. They’re at their best when you’re speeding through the city, weaving around skyscrapers and swooping down into one of the radiant blue highways which are cleverly incentivised to the player by providing a general speed boost.

This minute-to-minute driving gameplay feels smooth, as your HOVA unit has a slipperiness to it, and there are just enough obstacles in the form of other vehicles and buildings to keep you focused. For the most part though, the gameplay is relaxing; the enjoyment comes in taking in the scale of the city and the characters within it, rather than high-octane driving.

The ability to rise and fall with your vehicle is an excellent and essential touch, given the verticality of the city design. Holding a button to ascend straight upwards from a parking spot, then careening off into the lights in the distance, is what this is all about, and that simple motion delights every time. 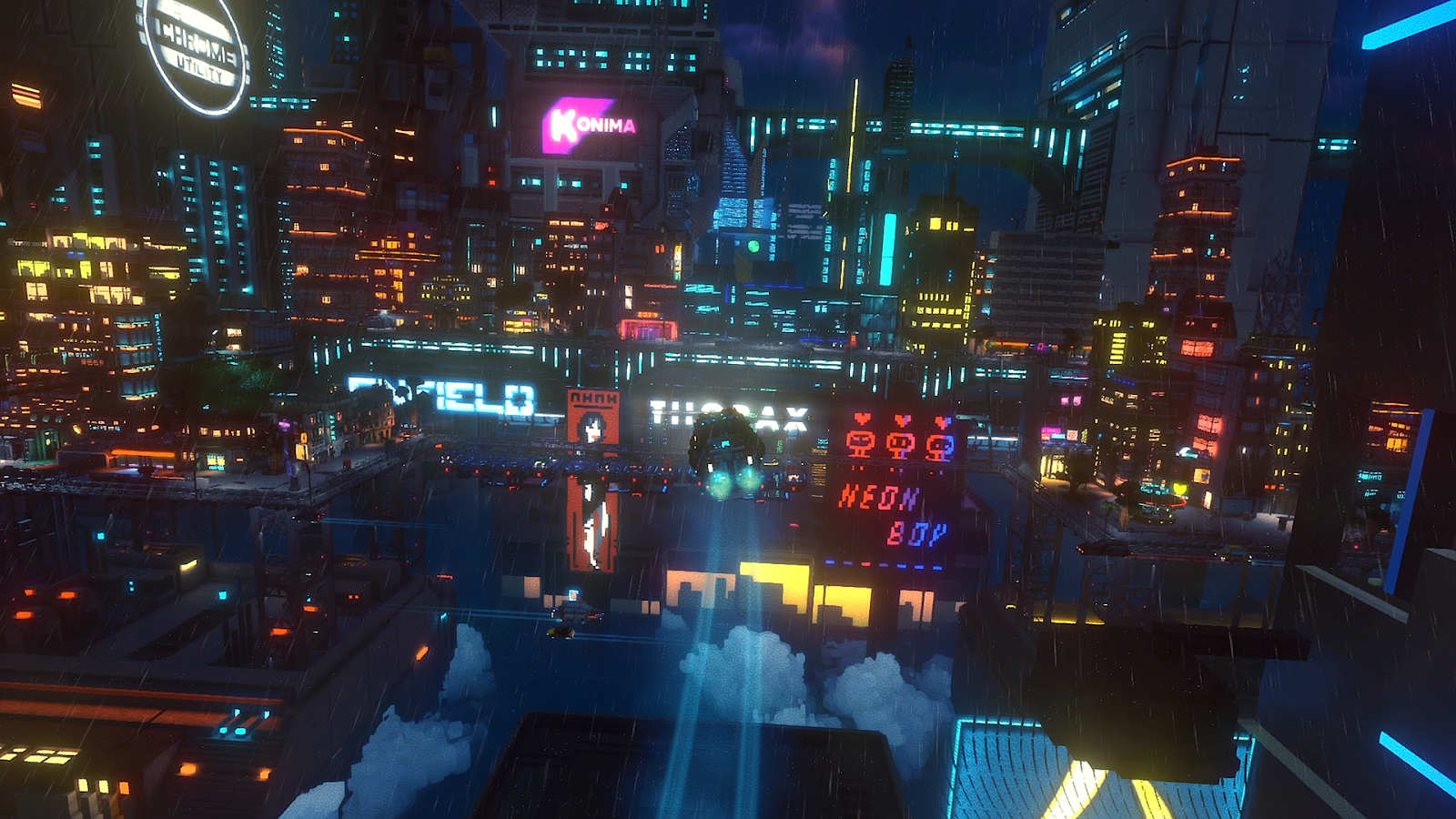 Where it graphically falls somewhat short, likely due to the sheer ambition of the city design, is getting up close. Roughly half your time will be spent exploring the city on foot, which unfortunately doesn’t provide quite the same feeling of wonder as driving does.

Whilst there are some locations which have their own character and charm, you’ll find there are times when it’s hard to distinguish whereabouts in the city you are. Though these districts all have their own place in the ecosystem of Nivalis (The Marrow is a decrepit, impoverished area, whilst The Spire is a towering sector where the CEOs reside), they sometimes don’t feel all that distinct.

This is doubly noticeable when on foot, as the game’s graphics simply don’t look as impressive up close thanks to the overly blocky quality of the voxels. They work exceptionally well when driving through the city, but some smaller motifs and character models look a little too much like LEGO or Roblox to feel immersive. It’s also jarring to travel horizontally through loading screen warp tunnels to different districts of the city, which are conceptually discussed as if they are below or above each other.

Luckily, much of this is negated thanks to the minutiae of the world-building in Nivalis. There are weird billboard advertisements with blindfolded foetuses, operators cranking beneath the lifts and regular announcements reminding residents of the death penalty for playing jazz without a license. It all adds up to a cohesive feeling world that, though it doesn’t have that many worthwhile diversions, entices you to reach the next story beat.

The Kid’s Got Character 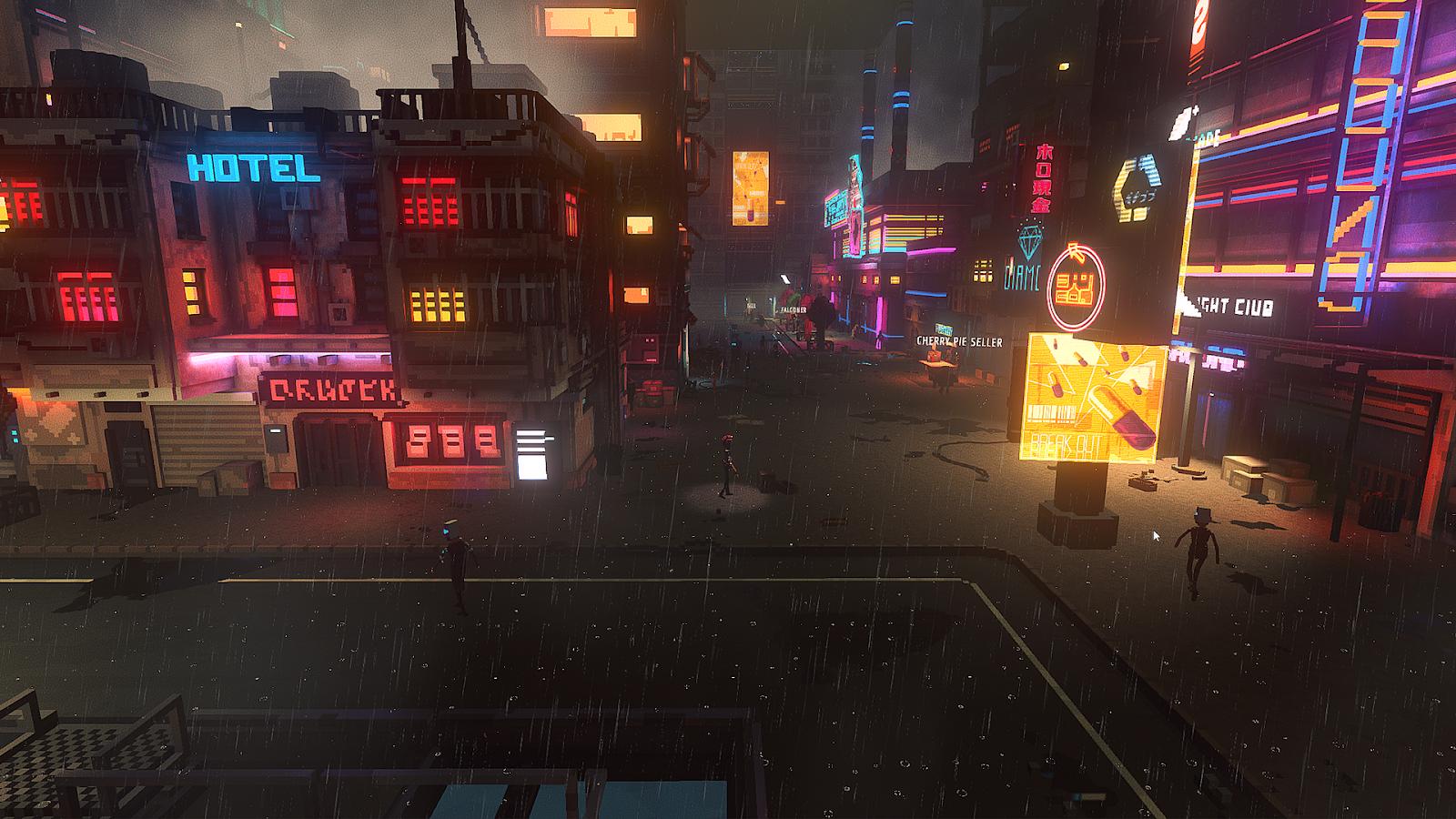 The story is interesting enough to keep you driving, largely thanks to its characters. Alongside Camus, a particular highlight is Huxley, whose dialogue and story arc is both hysterical and endearing. Though not shown much in its marketing, Cloudpunk is a very funny game, with some genuine laugh out loud quips and dialogue exchanges.

The writing, led by Thomas Welsh, is mostly tight and enjoyable throughout, with the biggest exception being when the dialogue attempts to highlight the rich-poor divide in the city. Rich characters in the game tend to come across as caricatures. Though they can be just as amusing as other members of its cast, the importance of some sociological message can get lost in how on the nose the critique is at times.

Other weightier aspects to the story are handled more deftly though, from the human skin trade to android worker’s rights. The voice acting across the main cast is commendable, though a bit rough when it comes to side characters.

It’s also worth noting that Rania is a well-rounded protagonist, from a demographic that deserves more representation in games. Her outsider perspective helps the player relate to her, and it’s a joy to follow her through the narrative.

More Than a Silver Lining 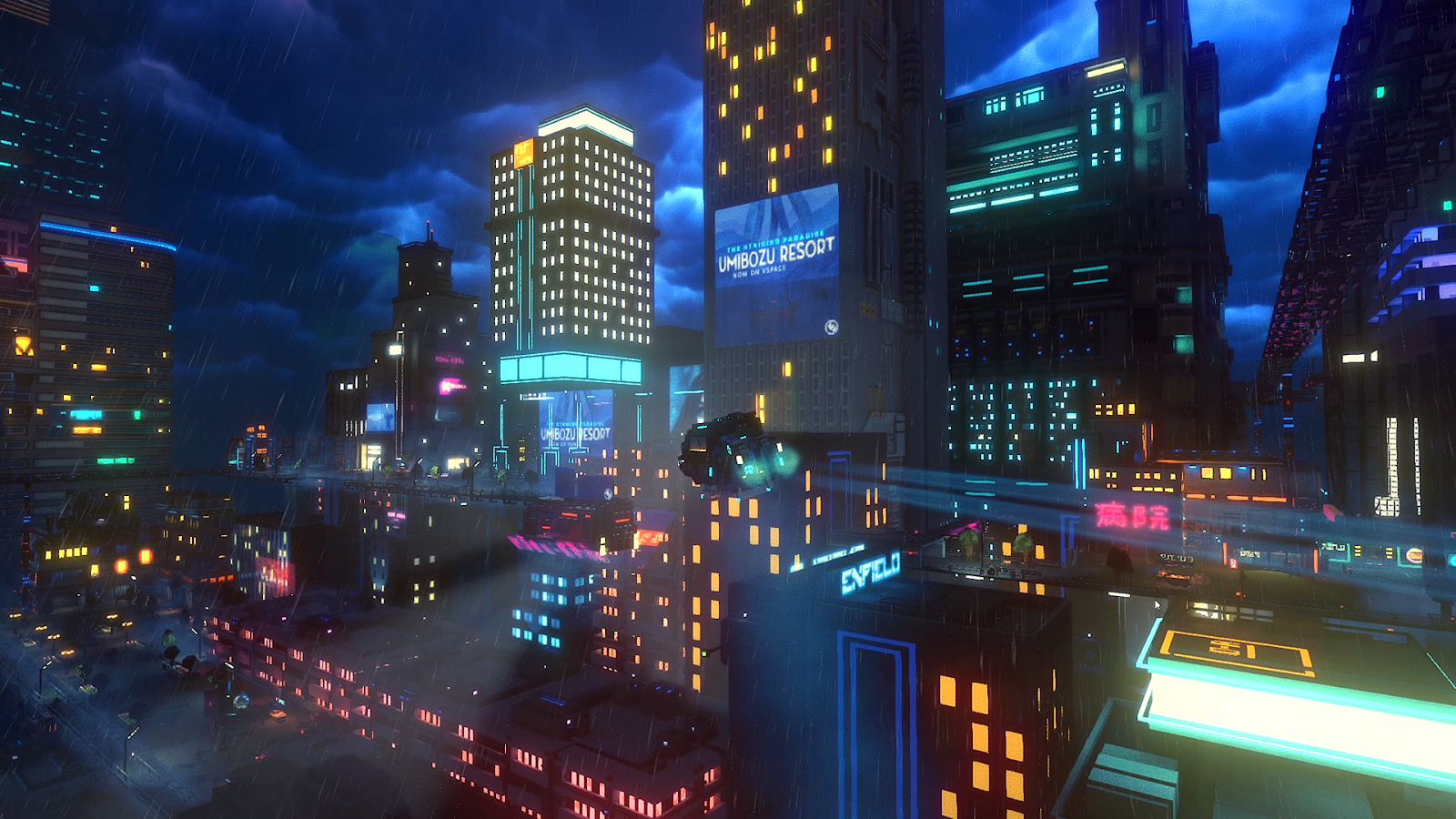 Any good futuristic take lives and dies by its sound design. Harry Critchley’s soundtrack is wonderful; very synth-heavy, sweeping like a film score, and it compliments the rain-soaked metropolis well. So too do the sound effects of your HOVA, which add a great deal to the futuristic feel of driving around the city.

Cloudpunk even does more than expected in its decision-making gameplay; though you’re presented with binary decisions, it’s rarely a good vs evil dilemma, with plenty of variables at play to make either option valid. It really needs to be experienced by anyone interested in cyberpunk narratives, story-driven gameplay or leisurely driving games. Even for those not interested in its themes, provided you’re open to the relaxed gameplay style, Cloudpunk will surprise you with how full of life its world is.