Sometimes when writing a review, I don’t know where to start. Cranked Up is a game where you play as a half doughnut, half chicken (or another animal should you choose to switch later). In the opening, you are lounging casually in your giant backyard mug of coffee (who has a face, with a moustache and a monocle) when tragedy strikes. Another doughnut, this one fused with a pineapple, flies into the scene in a zeppelin with evil intent. This nefarious doughnut’s dastardly plan is to fire pizza at a nearby police officer, and also you. This seems to work in his favour, as both are immediately dispatched and pineapple doughnut is free to achieve his ultimate goal. For whatever reason, he really wants your giant coffee mug.

I wish I was done with the preamble, but we’ve got more “lmao random” to get through. Your doughnut chicken, incensed with the robbery (kidnapping?) of the mug, leaps into action. Unfortunately, there’s not a lot a doughnut can physically do, so the first order of business is finding means of transport. After multiple failed experiments, the chicken doughnut settles on strapping rockets to itself and sets off in pursuit. 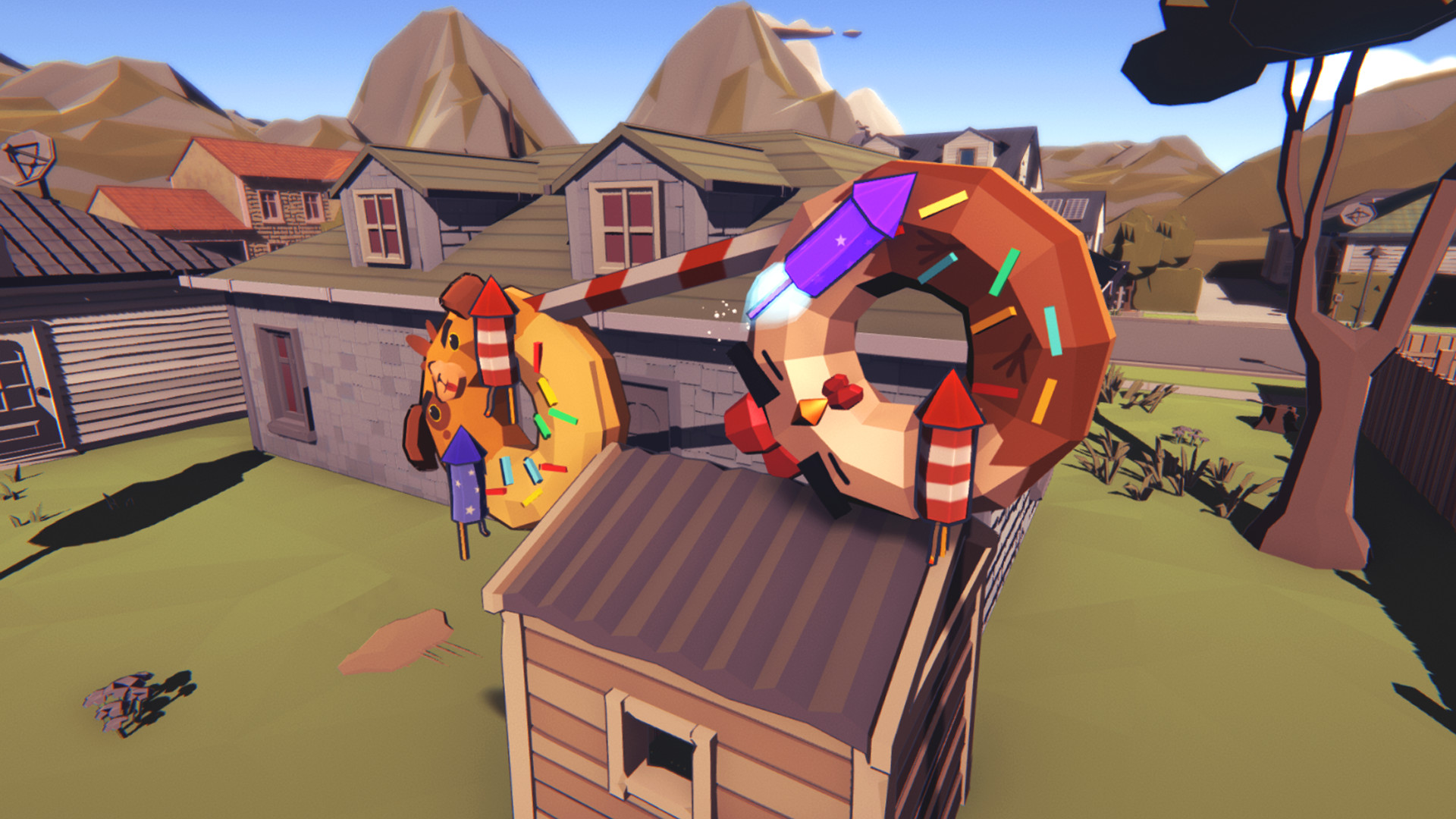 What follows is a puzzle-y platformer that takes cues from Trials, Team 17 and the works of Bennett Foddy. It has the humour of Overcooked and the gameplay of Qwop. This should not be a good game, but somehow it mostly is. Each stage is a simple matter of getting from A to B; your doughnut has two rockets attached which are controlled by the left and right triggers. The rub is that these rockets do not stay still, as firing them causes the doughnut to rotate. As such, your left trigger might propel the rocket on your left side at first but once you get moving that rocket will spin to your right side. Movement is pretty difficult, hence the Qwop comparison, where the simple act of moving to the right needs constant management of your rockets and their locations.

The challenge of the game is very similar to that of the Trials games. Traverse each stage, avoid hazards and dunk your doughnut in your mug, just in time for that dang pineapple guy to steal it away again. Much like how in Trials you could bail off your bike and fling your rider across the finish line, there’s a catharsis to chucking your doughnut as hard as you can into the mug once you know it’s a safe throw.

They see me rolling 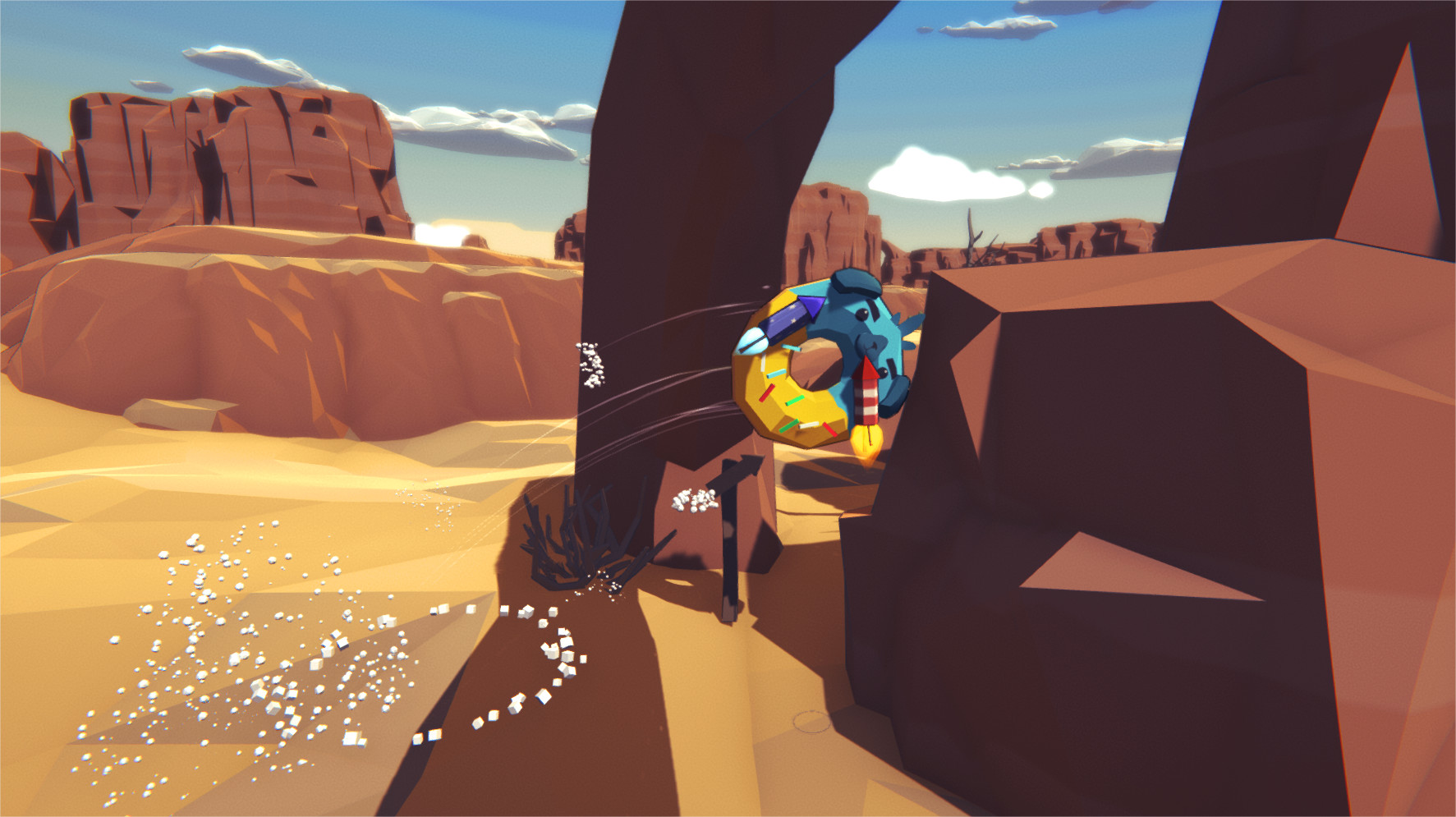 Although movement is itself difficult and brain-itchingly frustrating at times, once you get the swing of it, the game begins to present you with obstacles. What surprised me was the number of ways the game found new challenges as the levels go along. The early game is spent getting to grips with the movement system, and simple barriers are significant until you get used to moving the doughnut around. As you get better with your rockets, the game amps up the challenge. An early secret level had me attempting to fling the doughnut further than I thought possible and having it stop dead on a tiny perch. I assumed it to be an extra difficult challenge for the secret level and set it aside, only to be doing those exact kinds of manoeuvres in main levels later on. What seemed impossible without significant practice eventually became standard practice.

Cranked Up has the colourful charm of Overcooked, and enough platforming challenge to keep you engaged from start to finish. Frustration is core to the experience, and that may not be for everyone, but if snappy, repeated trial and error gameplay is your thing then Cranked Up is a good shout.

Miasma Caves Has No Violence, Only Chill Vibes