So you think you’re good? 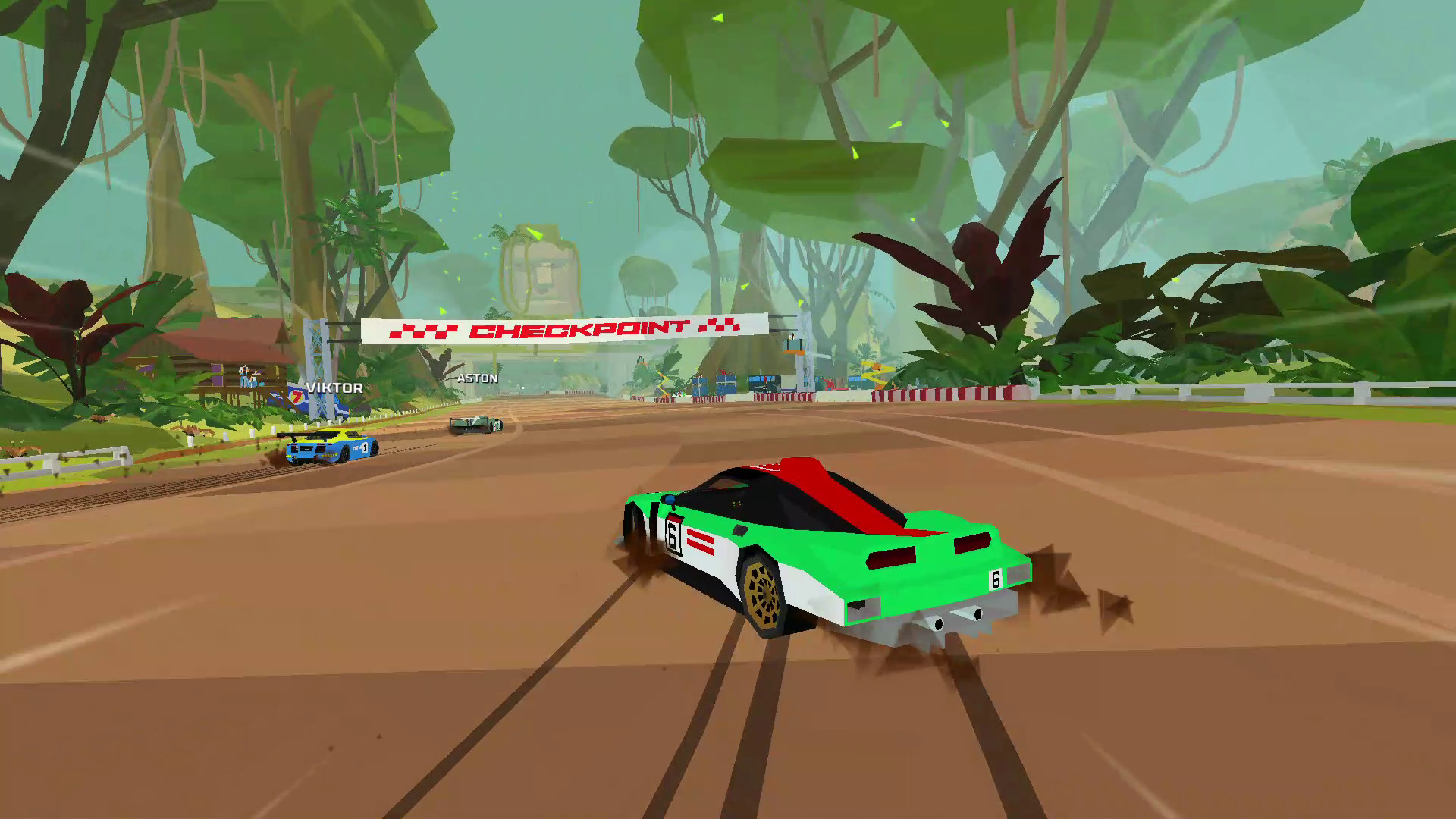 There’s a style of racing game that seemingly disappeared some time ago; bright colours, upbeat soundtracks, simple but nuanced car handling and races taking place in all kinds of exotic and pleasant looking places. I’m talking about the peak of Sega’s golden years, when AM2 were dominating the arcade scene and pioneering real-time 3D graphics with the likes of Virtua Racing, Daytona USA and Sega Rally. Thankfully, the fine developers over at Lucky Mountain UK and Sumo Digital have taken aim at this under-served section of the racing crowd and, I’m glad to say, they’ve hit the target with Hotshot Racing.

The rules of the road in Hotshot Racing are at once familiar to veteran racers and superbly simple for a newcomer to pick up within a race or two. Arcade racing standards such as timing your acceleration at the start of the race, slipstreaming and drifting are all in the mix. Performing the latter two techniques earns you charge for your boost meter, allowing up to four consecutive bursts of speed when triggered. Tactically storing and using this boost is absolutely essential to victory for sure, as a last moment push over the finish line is often the difference between narrow victory and a punishingly close loss. 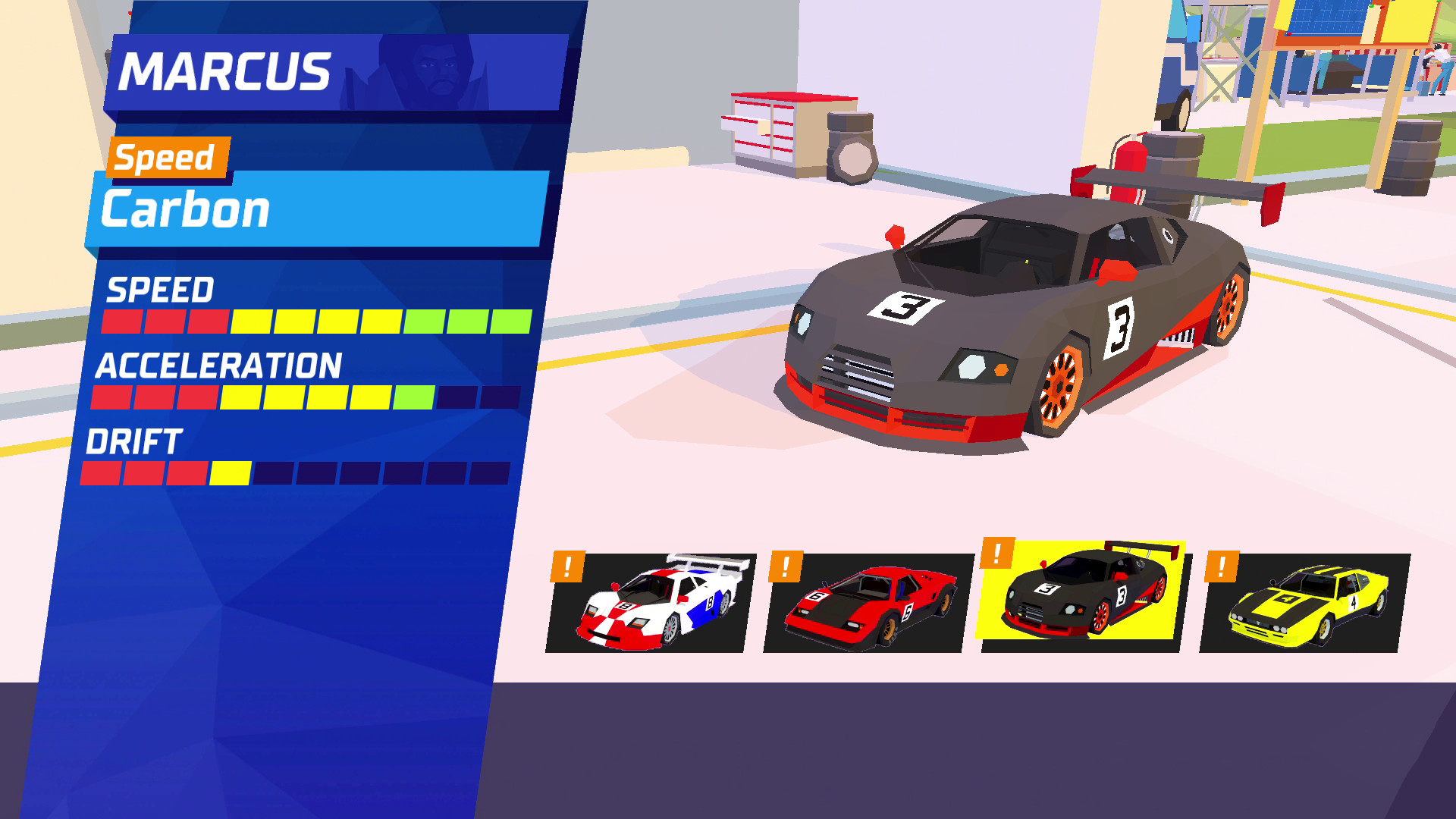 What stands out most immediately about Hotshot Racing is its retro aesthetic. Using untextured polygons to harken back to the earliest days of 3D computer games, there’s a kind of simple clarity to it all, unburdened by the need to chase realism. Unlike its inspirations though, Hotshot Racing is razor-sharp and slick, feeling like the best old school design principles have been enhanced by today’s technology.

Backing up the visuals is a soundtrack to match, with each course getting its own composition to suit its tone and style. The electronic overtones, pumping rhythms and catchy loops punctuate the icy caves, dense jungles and desolate deserts you drive through wonderfully. Like the graphics, Hotshot Racing’s audio takes the right amount of inspiration from its inspirations while applying the modern flair required to make it more than mere homage. My only wish is that there were just one or two tracks with lyrics to compete with the legendary Daytona USA soundtrack. I feel like someone belting out lyrics like “I wanna be a hotshot racer” over some Europop would have been the cherry on the cake.

Courses are filled with incidental details and cover four different styles; coast, desert, jungle and mountain, but within that is even more variety. Racing around the likes of a sunlit marina, a dessert baked plane graveyard, or glitzy casino again harkens to those classic arcade games, where sharp eyes might spot a joke or two hidden in the background and the aim was to please with sharp gameplay and simple fun.

Oh you, I bet you say that to all the cars 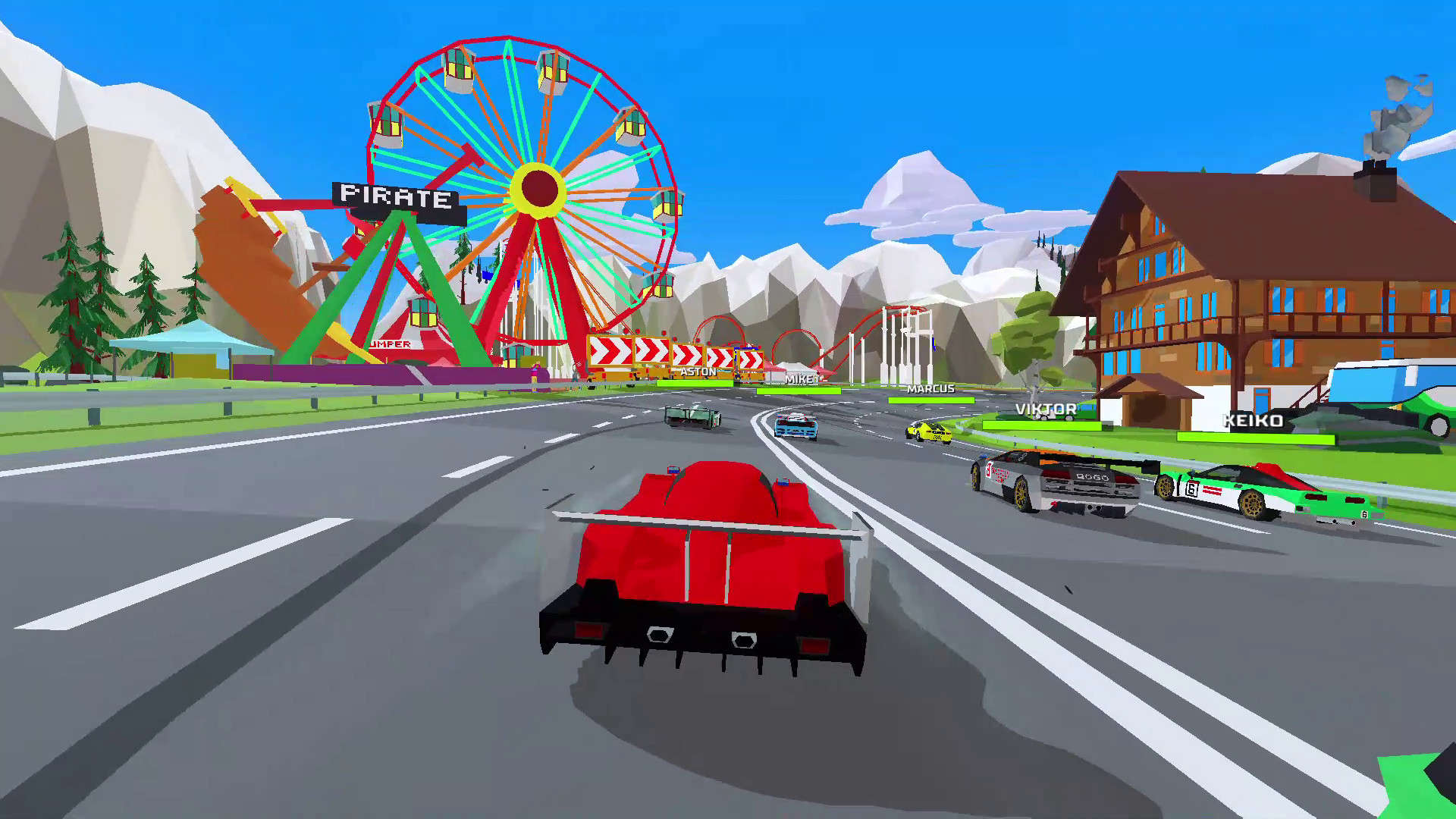 Adding to the charm are a host of international racers to play as, each with a simple motivation and perfectly pitched voice lines to inform their character as they race. What’s more, and this really hit the spot when it came to being a worthy homage to its inspirations, each has a brief ending sequence when finishing a grand prix. They might only have a handful of things to say for themselves, but the tone of the writing and variety of voices really adds something valuable to the mix. Beyond the characters themselves, an announcer punctuates proceedings with comments on the courses you’ll race and the customary pre-race count down, absolutely nailing another element of those retro games that Hotshot Racing aspires to ape.

Each racer has four cars to pick from, each offering a leaning toward a certain style of racing. For those unsure of what might give an edge on a given course, a balanced car is a good start, but it won’t take long before you find favourites among the speed, acceleration and drift focused vehicles. Completing tasks, such as drifting a certain number of times or slipstreaming for an amount of time will unlock visual customizations to apply for each car, and as a result, there’s a lot for completionists to do in Hotshot Racing and a whole lot of personalization available for multiplayer.

With sixteen standard courses spread across four grand prix alongside time trials and single races featuring mirrored versions of the tracks to effectively double the number of courses, there’s a solid amount of content to get stuck into from the off when playing alone, but multiplayer is where the lasting fun will be for many. In a rare case for a PC game, you can play up to four-player split-screen locally or even go online with your friends to compete in a full eight-player lobby. This makes Hotshot Racing a great party game to grab and jump into for a few races or even a full-blown tourney if you and your friends get hooked. The only nit-pick I have is that there’s no mirrored Grand Prix mode where it seems it would have fit so well.

Are those really the only options? 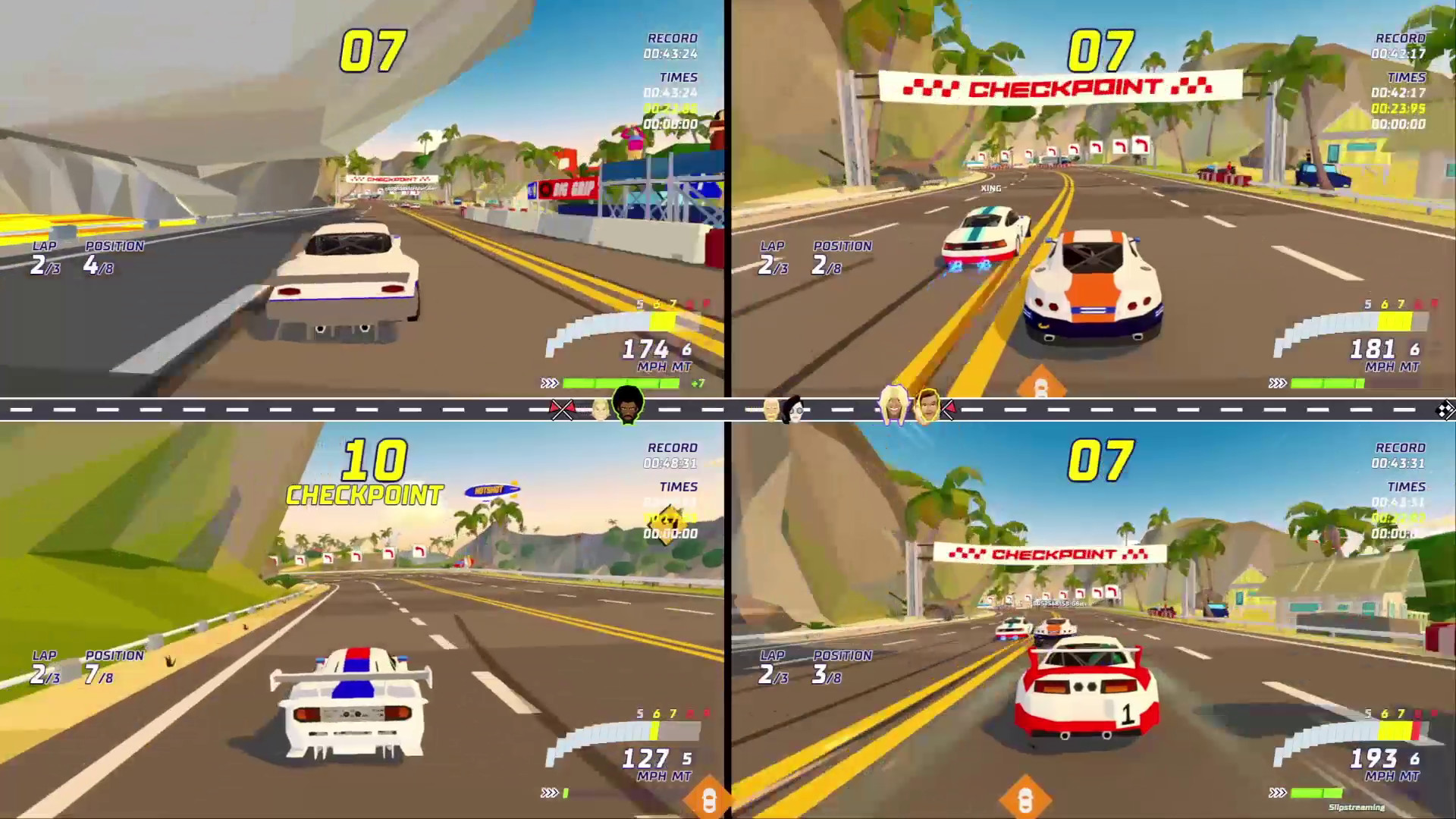 What’s more than the standard race mode are the two other multiplayer game types – Cops and Robbers and Drive or Explode. In Cops and Robbers, two drivers begin the session as the cops and need to chase down and ram the robbers off the road, reducing their health bar and eventually forcing the criminals to join the right side of the law, with the last one standing declared the victor. Be it against other people or the computer, the change of pace that comes from being constantly rammed and feeling like you’d better nail your next drift is a fun change.

In Drive or Explode, an ever-increasing minimum speed will force some precision driving from you as you battle to do your best Keanu Reeves impression and keep the vehicle above that threshold. What starts off relatively sedate turns frantic in no time, as a failure to corner properly or other players using their vehicle to bump and throw you reduces your speed. The chase to build up your boost bar and survive makes this mode intense in the moment, with a single mistake being enough to end you when the competition heats up.

In all, for the impressively low asking price of £15.99, Hotshot Racing is everything a fan of arcade racers could want, especially if you have fond memories of those aforementioned classics. It truly captures a style of racing that is so rarely seen these days. It’s fast-paced, easy to pick up and play, friendly feeling and, most importantly, it’s so much fun to play.
[Reviewed on PC]